8 Picks From The Ineichen ‘Precious Blues’ Auction On April 23, 2022 Featuring Delectable Rarities By De Bethune, Alain Silberstein, And Many Other Independents

There is a watch auctioneer focusing on bringing beauty into auctions rather than chasing world records by concentrating on (the) two highly popular brands: Ineichen based in Zurich. Case in point was March’s La Vie en Rose auction, which featured 40 watches – most by independent watchmakers – housed in pink gold cases.

This ideal of beauty and rarity continues with Ineichen’s next auction, taking place on April 23, 2022, called Precious Blues, featuring a curated selection of 50 rather rare timepieces with blue details.

The sale does include timepieces by Patek Philippe, including today’s “it watch,” the Nautilus (lots 5, 6, and 40), but also for example a gorgeous example of an Ellipse in yellow gold with a mesmerizing blue dial (lot 1). But there is not a Rolex in sight here, and only one Audemars Piguet: a Jules Audemars Perpetual Calendar. However, there are plenty of gorgeous Vacheron Constantin timepieces with blue dials.

Here are eight timepieces in the auction that I think we should be paying special attention to. It was hard to choose from all the unique beauty here, but I think I have managed to pick some really cool under-the-radar rarities.

Starting out on the more affordable end with the only Breguet timepiece in this auction, we encounter a 39 x 14.4 mm white gold Type XX made between 2000 and 2012 with a pretty rare and absolutely gorgeous blue dial. It’s striking for a historically inspired watch. 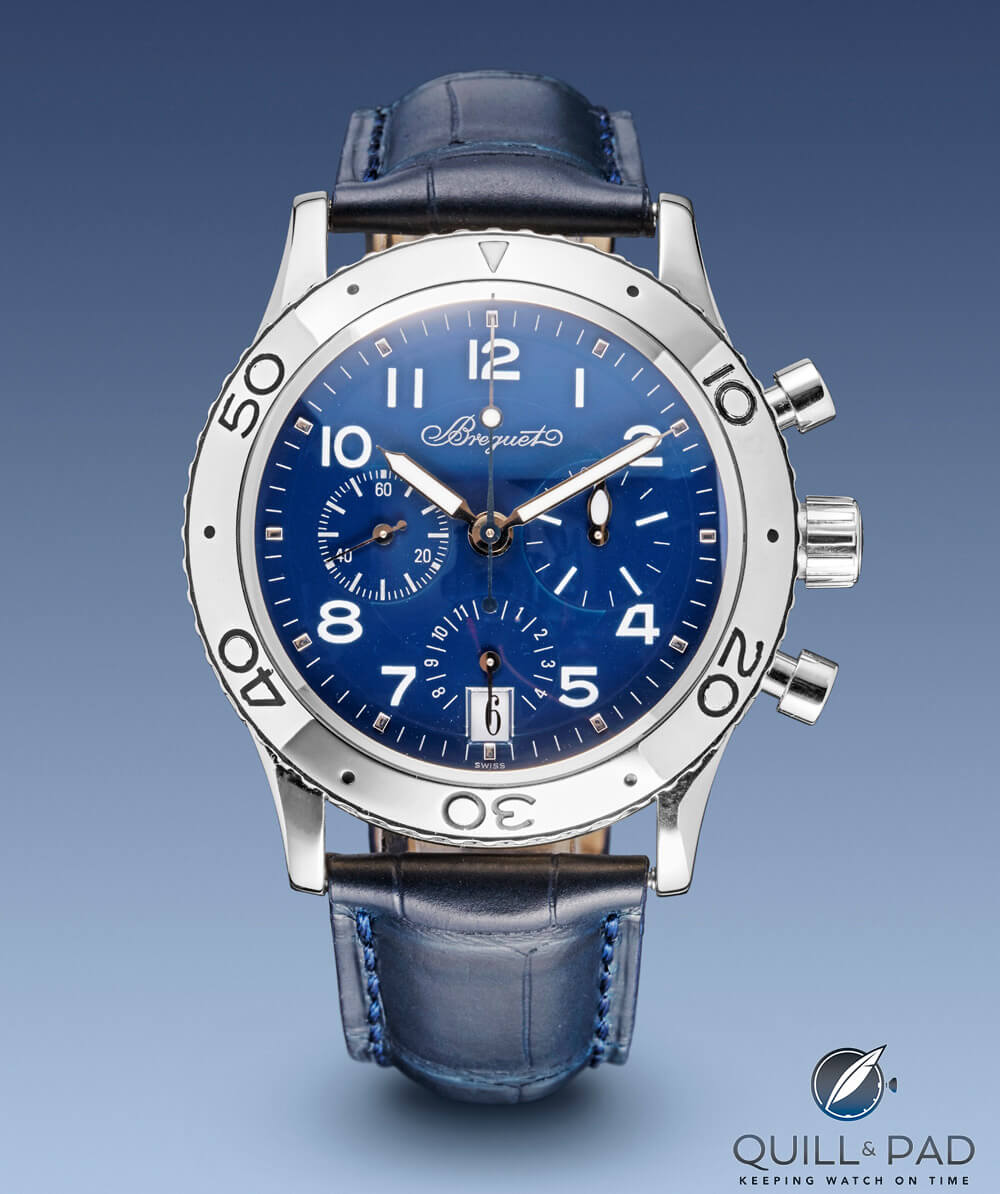 This collaborative Endeavour Cylindrical Tourbillon launched in mid-2020 as one of the first serious timepieces to come out during the pandemic. It was certainly a risk for H. Moser & Cie and MB&F to introduce it at that time, but the risk paid off and it sold out (and through) immediately. Both it and its sister timepiece, the MB&F x H. Moser LM101. 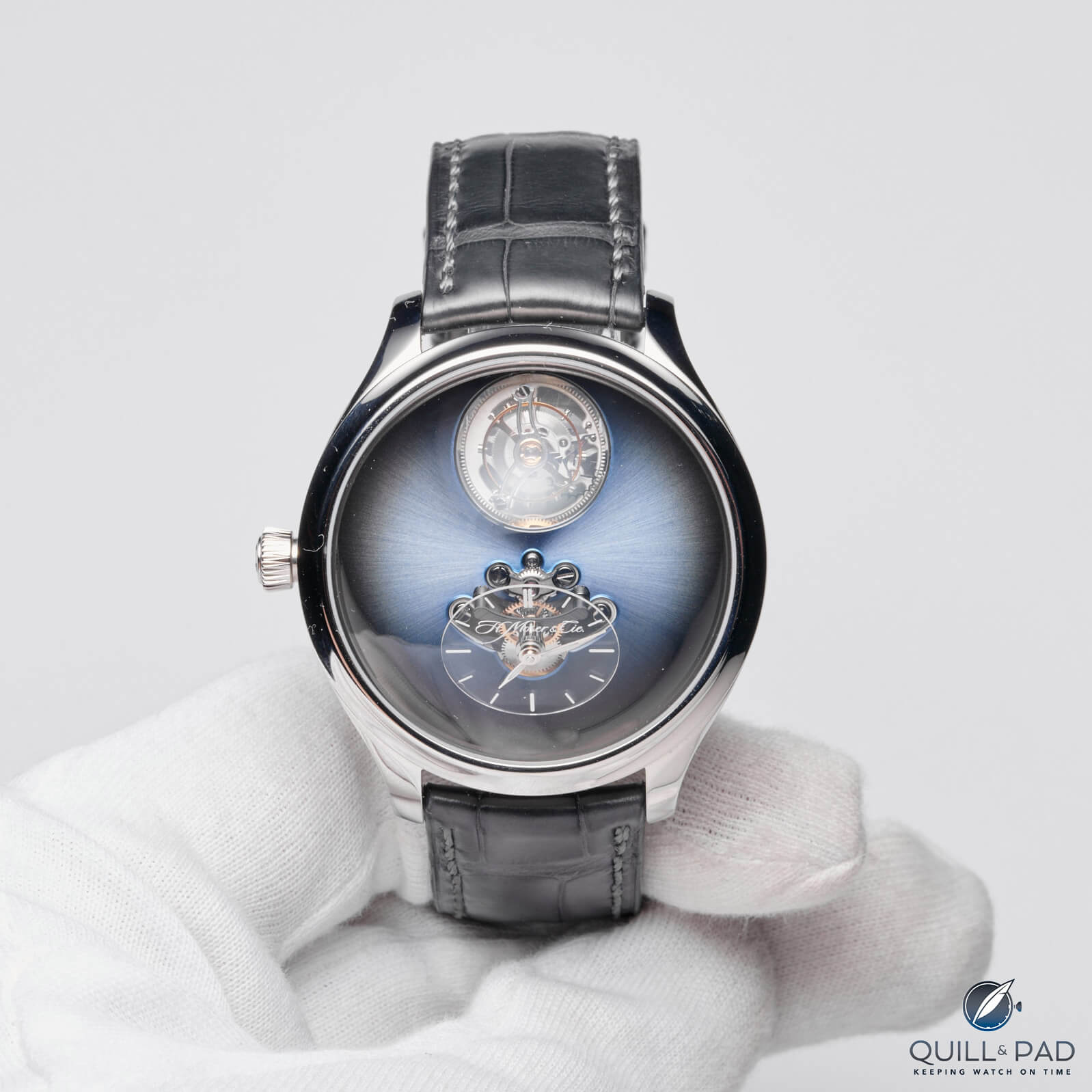 The Endeavour Cylindrical Tourbillon was offered in five limited editions of 15 examples each in steel with dials in Ice Blue, Funky Blue, Burgundy, Cosmic Green, and Off-White Fumé, the latter with blued hour and minute hands. The Ice Blue version, which is what we have here, was sold by Moser exclusively online at www.shop-now.h-moser.com.

As one of only 15 pieces of this model with an Ice Blue dial, I’d say this is pretty rare. And at a retail price of $79,000, should the estimate stay within its predicted range of CHF 50,000-60,000, it could become a rather good deal considering current prices for pre-owned MB&F and Moser timepieces. But the way that both new and pre-owned Moser and MB&F watches have been flying off the shelves lately, I doubt it will remain there.

For a full rundown of this model at the time of its launch, including hands-on photography, please see Hands On & Live Photos: MB&F x H. Moser LM101 And H. Moser x MB&F Endeavour Cylindrical Tourbillon. 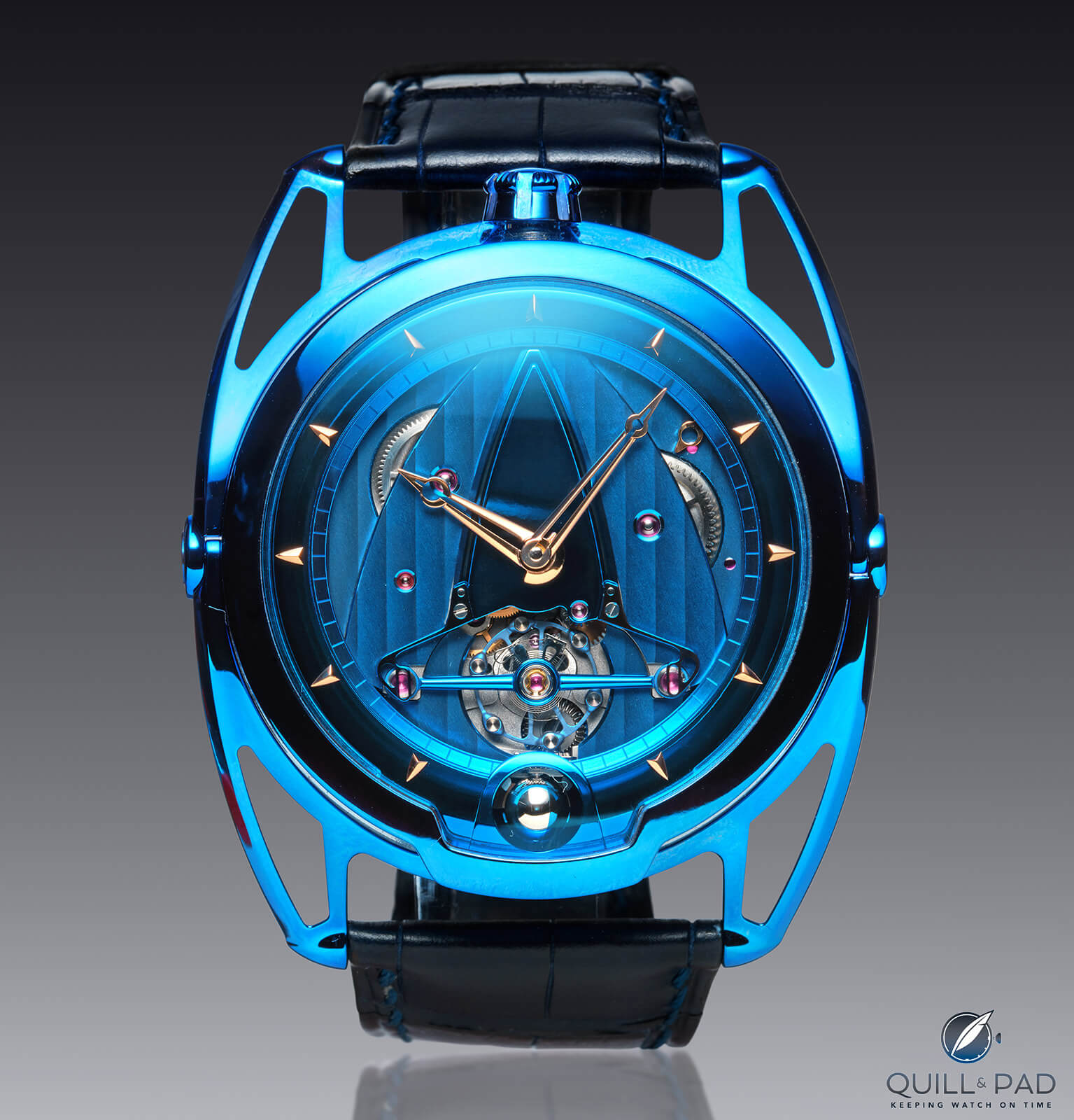 The De Bethune DB28 Kind of Blue is definitely among my favorites (as if I could ever pick a favorite!). I love the beautiful blued titanium elements of this brand – the most beautiful blue in the business in my opinion – and the three-dimensional moon phase in conjunction with the movement visible from the front. These elements together are such a winning combination, I could look at them all day, every day. In fact, I did just that the time I was lent the DB28 Kind of Blue Tourbillon for a week – a week in heaven!

The Kind of Blue series is limited to just five pieces produced per year, and the example here was manufactured in 2021. De Bethune reports only 17 pieces made since 2016, and it is being offered in nearly unworn condition at an estimate of CHF 70,000-90,000.

But perhaps – just perhaps – my very favorite De Bethune is the DB28 Digitale introduced in 2014. Here the hours are displayed in jump fashion, while the minutes are on a ball bearing-mounted disk that moves in retrograde motion. 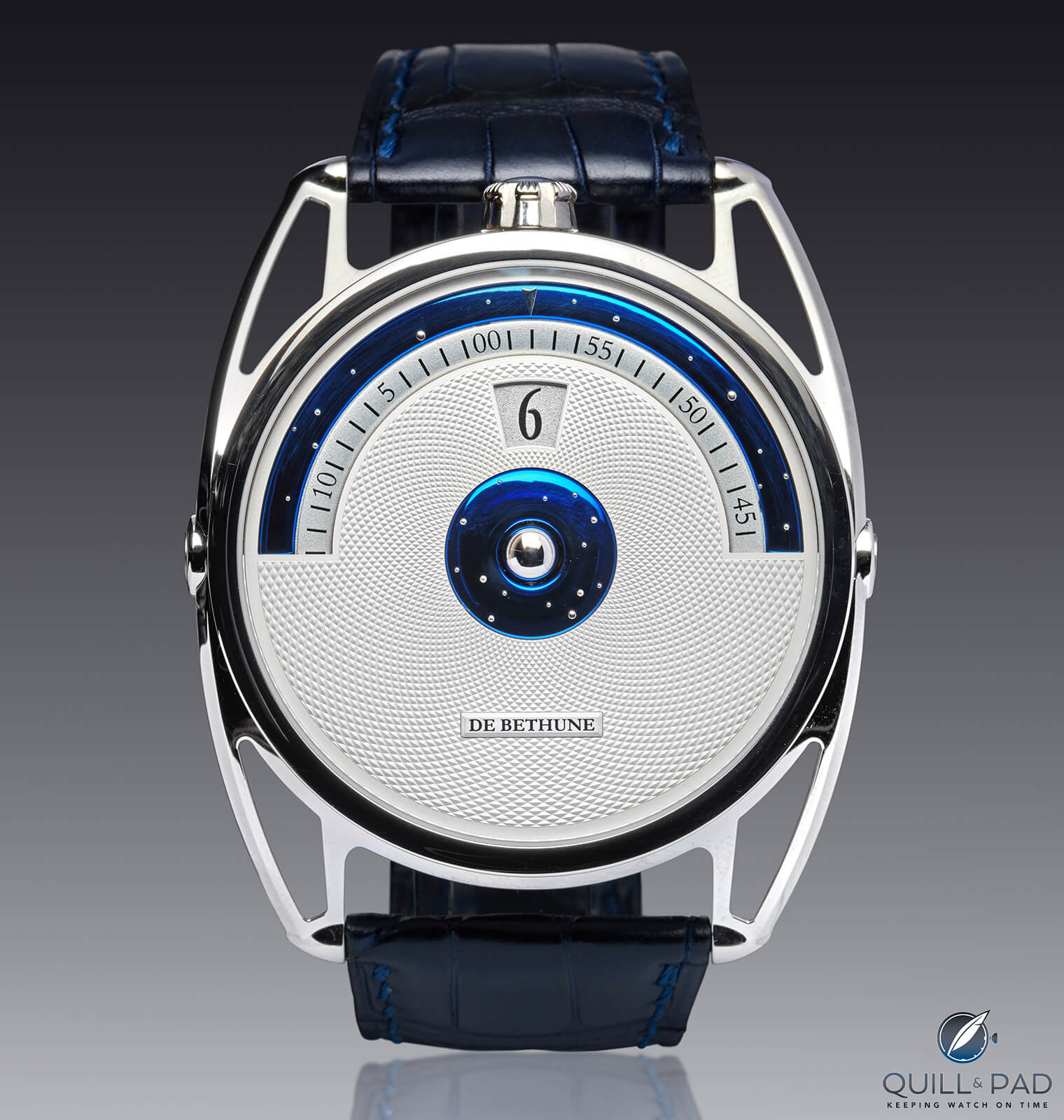 And then there is that three-dimensional moon phase right in the center of the dial, two-thirds of which is a beautiful hand-guilloché barleycorn radiating out from a polished and heat-blued titanium central disk studded with white gold “stars.”

See more about this watch in The Nine Muses And The De Bethune DB28 Digitale.

In 2003, A.H.C.I. co-founder Svend Andersen introduced a timepiece in homage to the standardized world time created by Sir Sandford Fleming in 1884. Appropriately, Andersen named his masterpiece 1884, dedicating the gold rotor to Fleming and including his name, years of birth and death, bust, and the words “inventor of world time.” The 40 mm watch was offered in a series of 50 pieces in pink/red gold, 50 in white gold, and 20 in platinum.

This white gold watch is a piece of history. And according to Ineichen, it’s in practically mint condition.

It’s an absolute steal at the auction house’s estimate of CHF 6,000-8,000. My guess is it will exceed the high limit.

This watch rarely ever comes up at auction: the A. Lange & Söhne Arkade was one of the four original timepieces issued by the Saxon brand in 1994 at its rebirth. Walter Lange imagined the Arkade as the brand’s “ladies’ timepiece,” but gendering watches was a practice discarded at A. Lange & Söhne early on, the brand preferring instead to use adjectives like “Grand” for the larger versions and “Little” for the smaller versions of watches that deviated from their classic sizes.

Aside from the size – a robust 38 x 29.5 x 9 mm – the Grand Arkade includes other stylistic changes over the smaller Arkade such as the greater number of Arabic numerals over hour markers and a larger subsidiary seconds dial with a triangle-tipped hand.

The Arkade is rarely seen on the second-hand market. And within the small amount of Arkade models in circulation, the white gold versions with their beautiful deep blue galvanized solid silver dials are even rarer.

This watch is a real deal at the auction house’s estimate of CHF 6,000-8,000. My guess is it will far exceed the high limit, particularly considering the high number of bids already placed at the time of this writing.

It makes me so happy to see this watch again! One of Alain Silberstein’s crazy tourbillons from 2003 from one of his craziest ideas: a limited edition of sixteen different tourbillons, each one funkier than the next and limited to 500 pieces – at that time an incredible number of tourbillons to be making. They were powered by the now-defunct Progress tourbillon caliber (which later became STT and was finally taken over by Bovet to become Dimier in 2006). 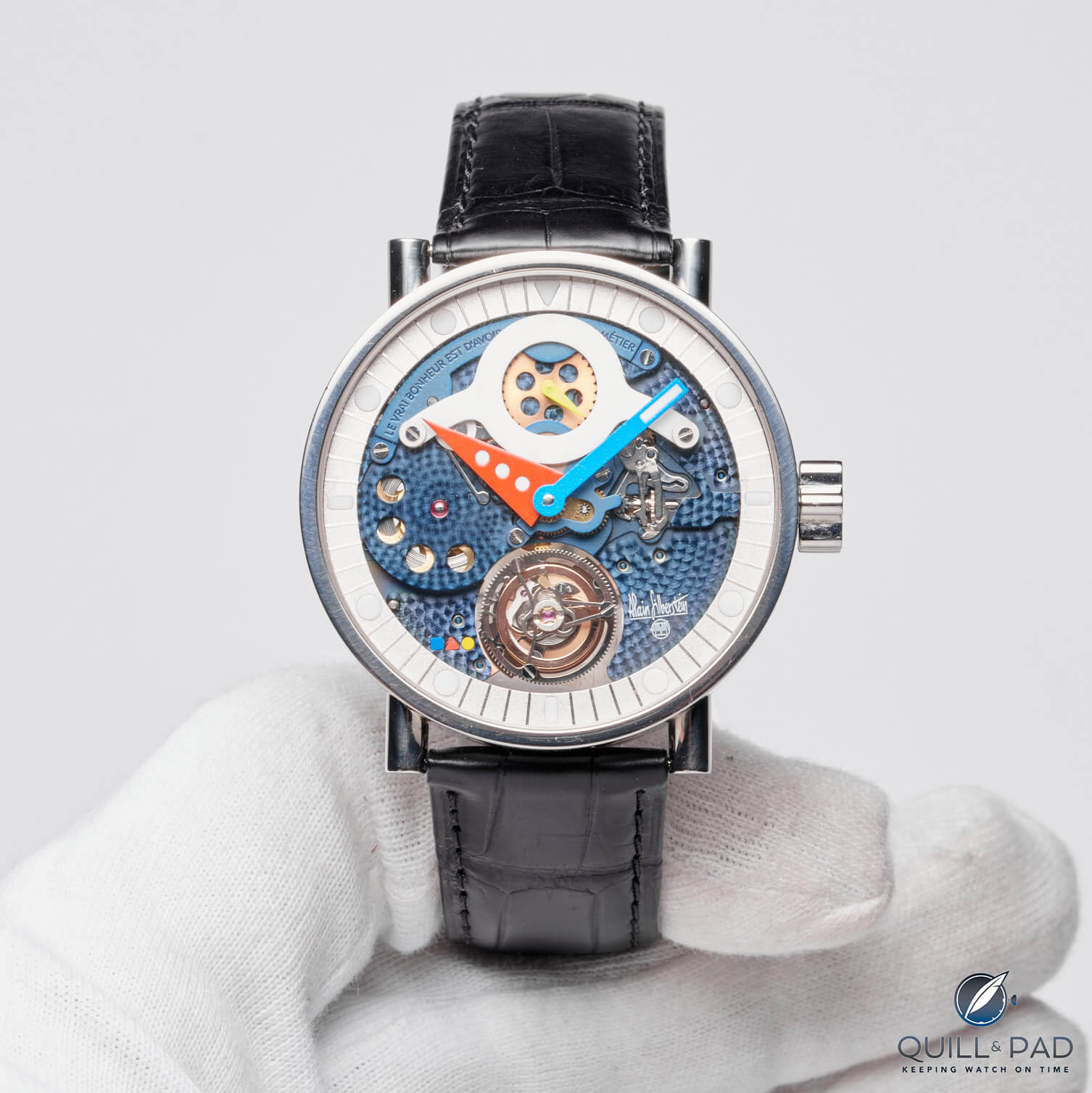 I have no first-hand knowledge as to whether the editions were produced to the end, but Ineichen notes that there may not be any examples numbered over 100. Both Ineichen and Phillips do not believe that the production run was completed.

“Kinetic art” is what Silberstein called this marriage of color and technology. Remember that at that time tourbillons were still serious business; clothed in anything other than a traditional look they were bound to generate comment and criticism. This piece is representative of a cutting-edge moment in Silberstein’s career.

The Alain Silberstein Tourbillon Volant Blue PVD Limited Edition is a piece of modern watch history for sure. Its estimate comes in at CHF 15,000-20,000.

The Ulysse Nardin Freak, however, is objectively an even bigger piece of watch history.

There are very few timepieces that have changed the course of watch history, but Ulysse Nardin’s Freak is one of them. I think that the truly modern era of watchmaking began in 2000 with the introduction of the first Freak with its Dual Direct Escapement. The shape of the escape wheels in the Dual Direct Escapement that made up the minute hand, and the fact that there were two of them, made it necessary for them to be lighter, more efficient, harder, more elastic, more resistant to wear, and above all friction-free so that they did not require lubrication.

Ulysse Nardin’s ensuing exploration of the LIGA process to make these escape wheels put the company’s extensive research into real motion. Supplier Mimotec not only enabled the brand to create perfectly smooth, friction-free parts in nickel and nickel-phosphorus alloys that were ideal for prototyping, but also joined Ulysse Nardin in the quest for further research into silicon.

Ulysse Nardin had originally partnered with CSEM (Centre Suisse d’Electronique et de Microtechnique S.A) for its work with silicon in a group that at the time comprised Swatch Group, Rolex, Patek Philippe, Richemont, and the Federation of the Swiss Watch Industry (FH).

In 2006, Mimotec and Ulysse Nardin entered into a joint venture to explore the combination of LIGA and silicon, christening the new firm created from the partnership Sigatec.

The Freak broke major conventions in traditional watchmaking, and the brand continued to introduce new versions of it that acted as little wrist laboratories. And was the first to do so. 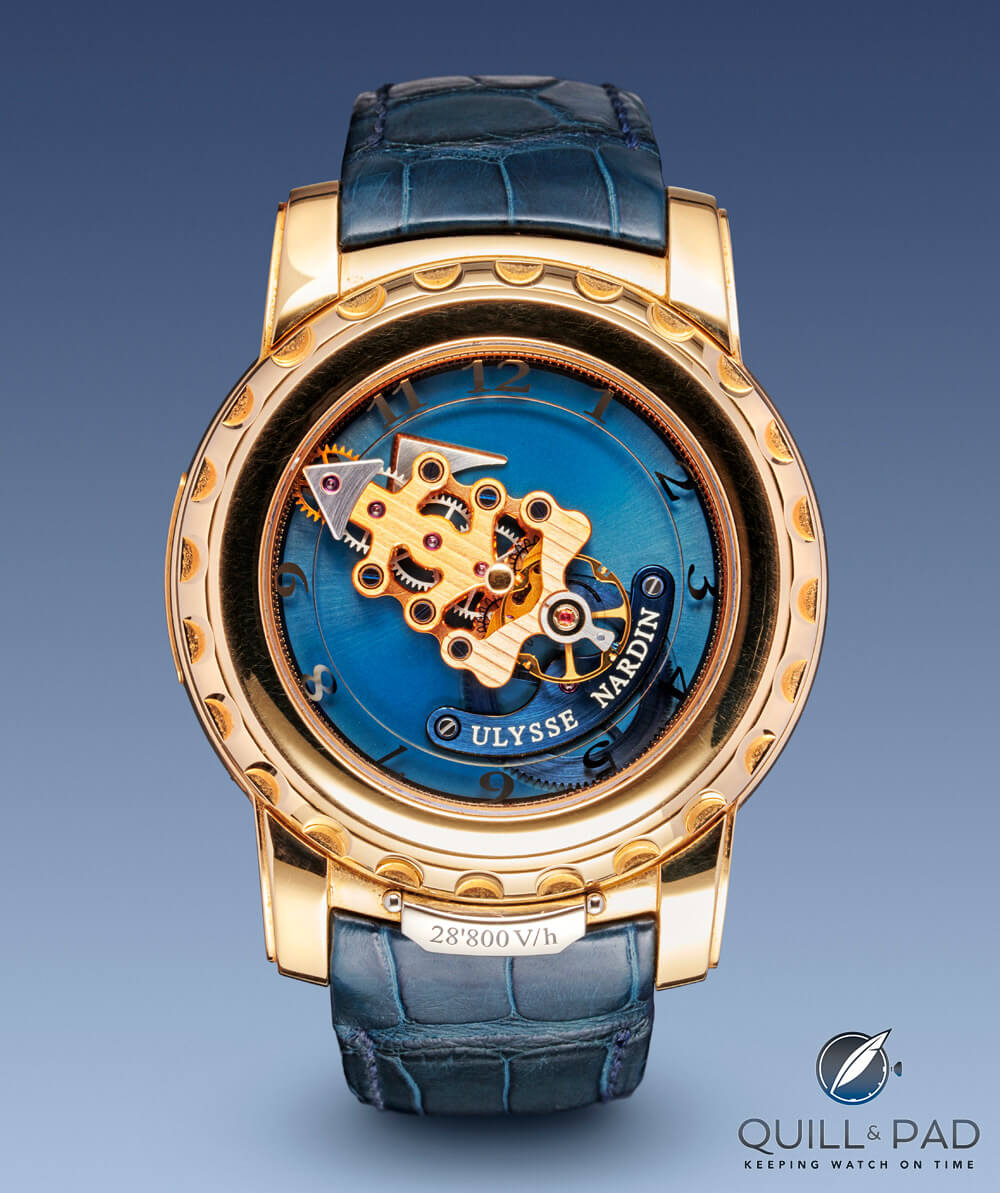 Ineichen is offering several versions of the Freak in this twenty-second year after its introduction (and perhaps not coincidentally the same year that Ulysse Nardin has chosen to head back to something closer to its own roots). Lots 3 and 4 are both variations of the second iteration of the Freak (Reference 026-88) launched in 2005 with a new version of the bezel and a bezel-locking mechanism to make moving the “hands” inadvertently less possible. Both versions (lot 3 in pink gold and lot 4 in white gold) carry estimates of CHF 15,000-20,000.

Lot 17 is a white gold Freak Blue Phantom, which launched in 2008, though this example is from 2011. It was the last to be produced with the original caliber architecture conceived by Ludwig Oechslin. It carries an estimate of CHF 20,000-25,000. 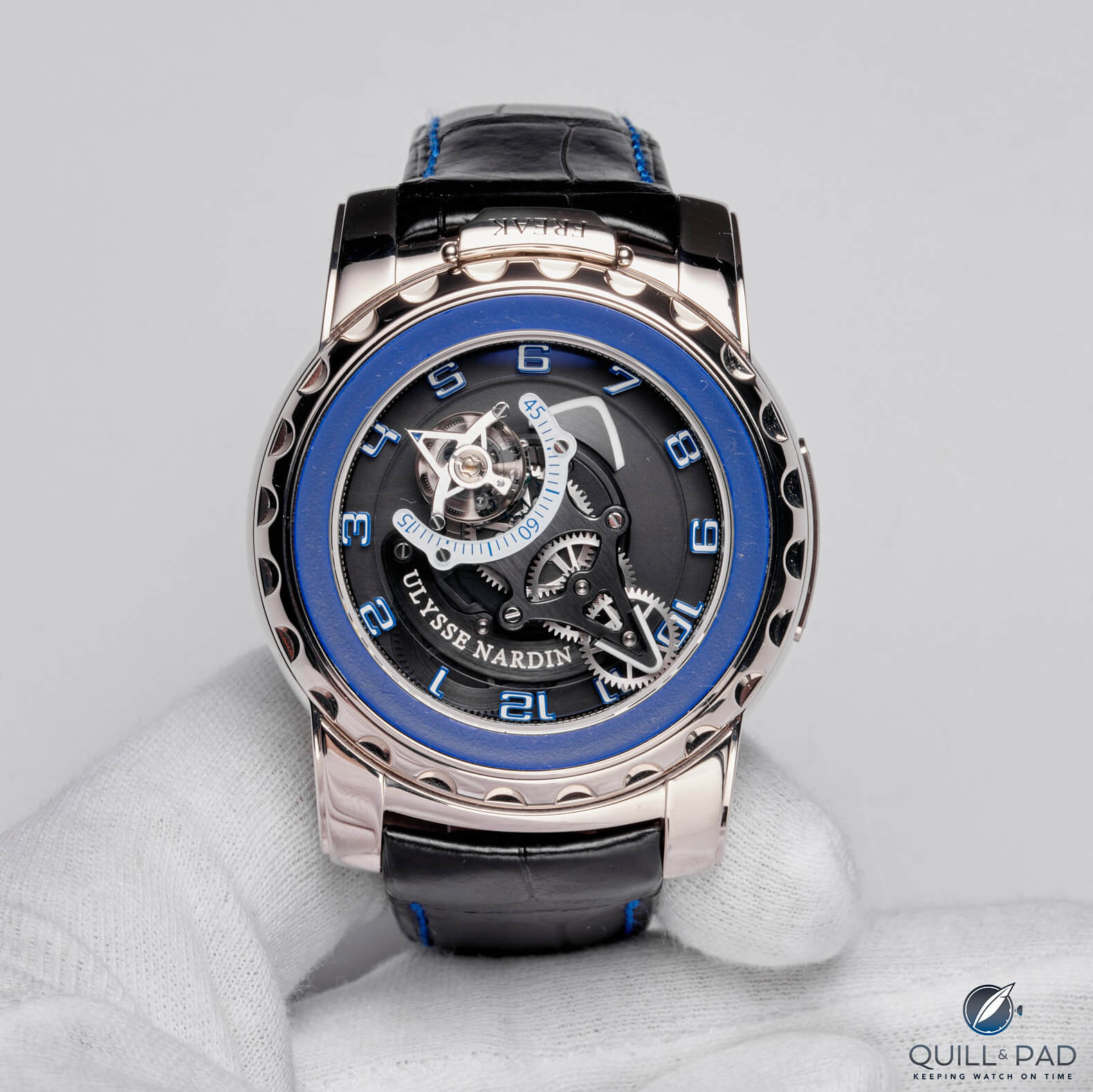 Which brings us to lot 18, the Freak Diavolo Tourbillon Blue Reference 2080-115/02, the first of the new version of the Freak called the Diavolo with a 60-second flying tourbillon replacing the dual escape wheels of the original concept. This new caliber was developed in 2010, debuting in the Freak Diavolo Rolf 75 in celebration of previous owner Rolf Schnyder’s seventy-fifth birthday. This particular example came after that and was manufactured in 2014. It is offered at an estimate of CHF 25,000-30,000.

Together, these examples of the Freak present a great overview of the evolution of this watch up until Ulysse Nardin’s takeover by Kering in 2014 after Schnyder’s death, when the watch completely changed character. Now, with Kering having sold the brand to its management team, I am seeing a return to some of the root ideas. But that’s a story for another day.

For more on this auction, please visit ineichen.com.

Chess Moves: What The January 2022 Sale Of Ulysse Nardin And Girard-Perregaux Have To Do With Brioni

De Bethune DB28: How I Launched It, Why I Bought It, And Why It’s The Perfect ‘One Watch’

Available in the shop: Rare Royalty – the Tudor Pelagos State of Qatar