Hampton Court Palace is in Surrey, just outside London. This baroque marvel built for King William III and Mary II boasts 60 acres of beautiful gardens. And on the weekend of September 2 through 4, 2022 it served as the backdrop for a Concours of Elegance that can easily claim a place among prestigious events such as Pebble Beach and the Villa d’Este Concorso d’Eleganza. 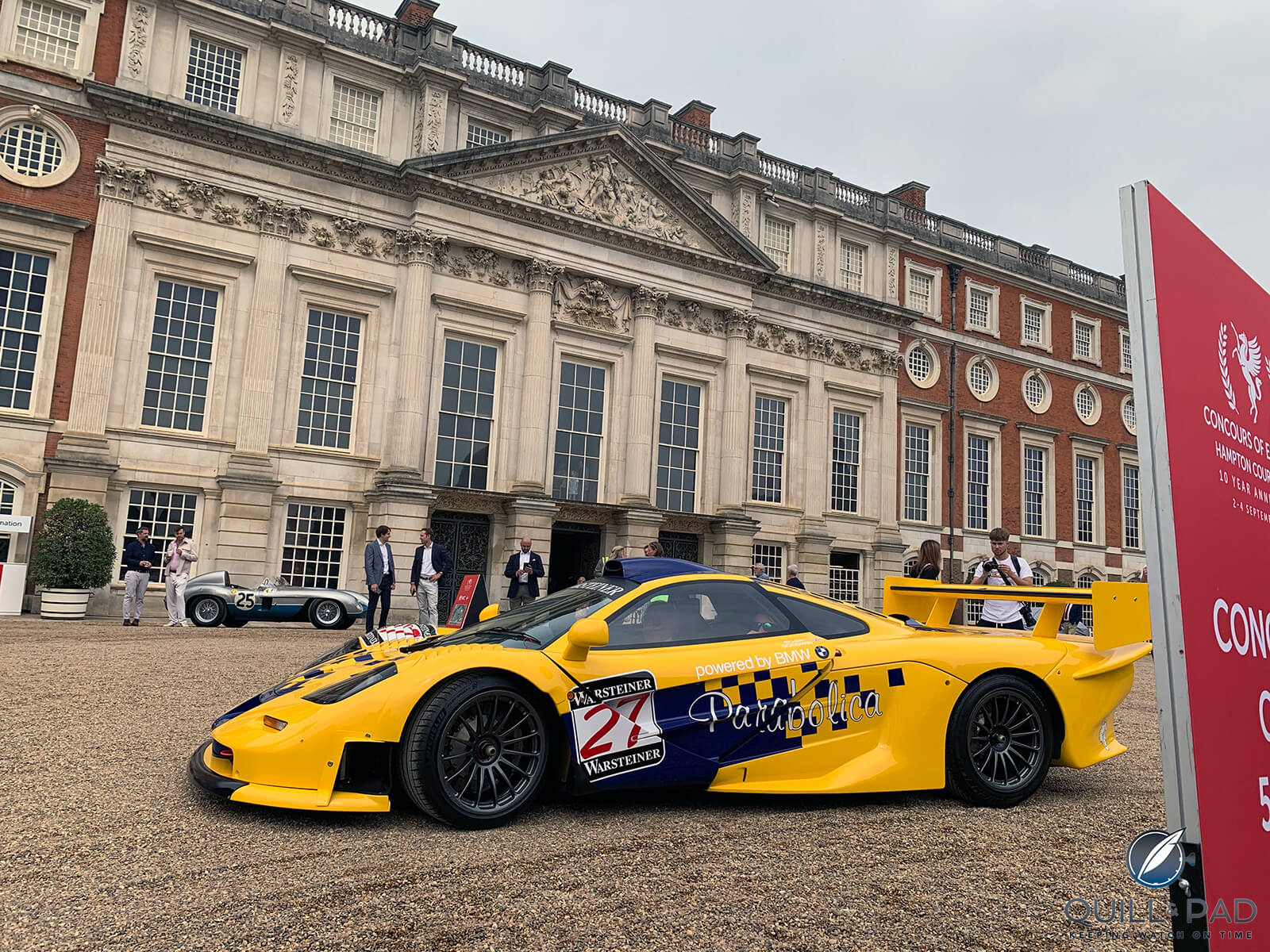 A. Lange & Söhne is a partner in the Concours of Elegance events of both Villa d’Este and Hampton Court. As only a limited number of cars are accepted in each edition of these events, they are intimate yet offer an extraordinarily high level. According to Wilhelm Schmid, CEO of A. Lange & Söhne, this also makes these events such a perfect fit for his brand. “We are both about people and passion,” he told me. “Many of the cars here are hand-built, and these surroundings offer a natural platform for our watches.”

Schmid even sees a natural evolvement in Lange’s collaboration with the Hampton Court Concours of Elegance organization; A. Lange & Söhne has dedicated itself to increasing the brand’s contribution to the event with each edition. A centrally placed booth highlights not only the brand’s current collection and the craftsmanship needed to create it, but also features a watchmaker at a bench who kindly takes visitors on an intimate journey to what makes A. Lange & Söhne so special.

The A. Lange & Söhne booth is a perfect backdrop for this unique collection of Packard Twelves (photo courtesy Martin Green)

The environment can only be described as unique. Not just because of the nearby presence of the Hampton Court Palace, but also because of the wafting high-octane fuel lingering in the air. And good looks are not enough to get into the Hampton Court Palace Concours of Elegance: all the participating cars drive to their places on the luxurious grounds. 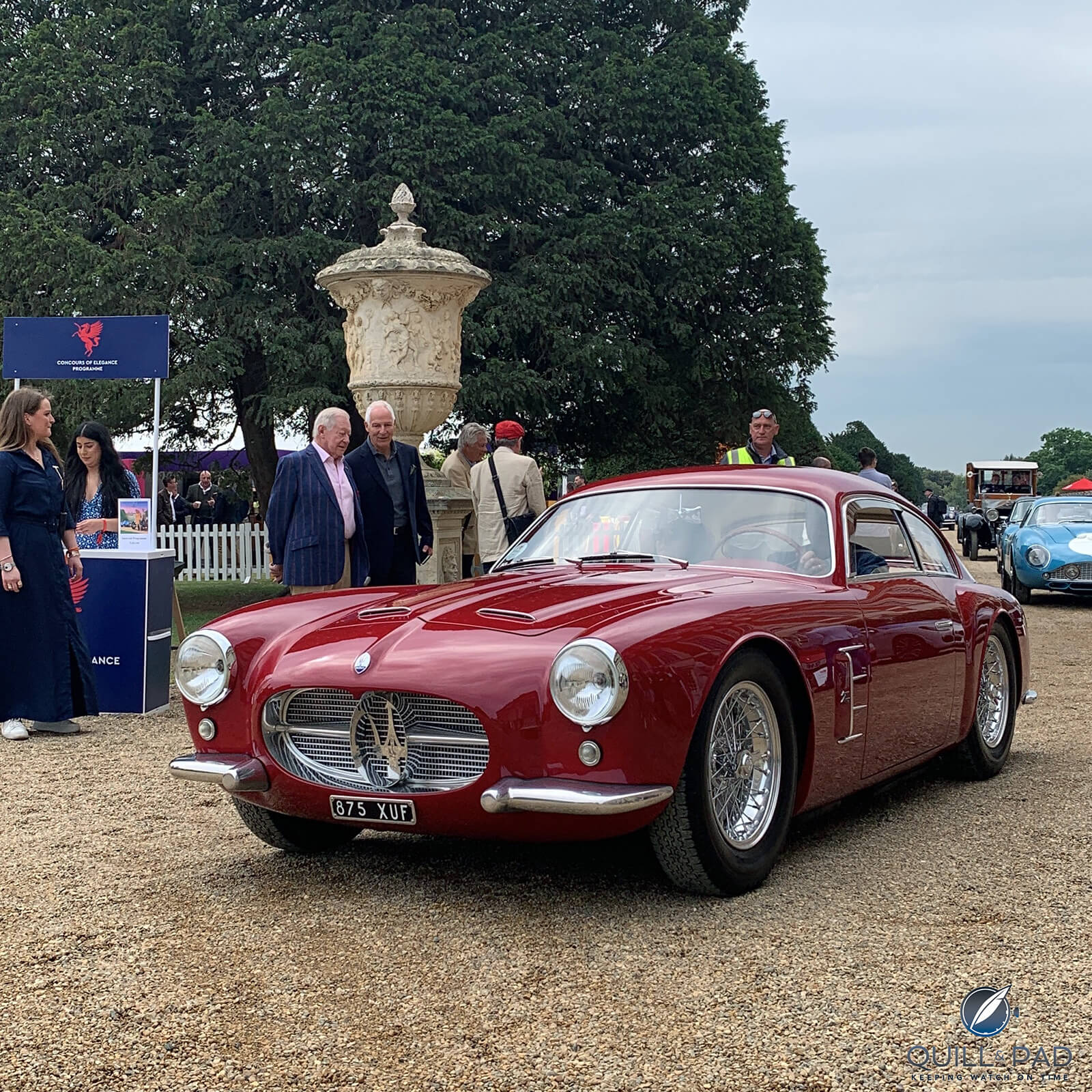 This includes rare beauties such as the futuristic 1938 Dubonnet Hispano-Suiza H6B Xenia with its eight-liter, six in-line engine; a breathtakingly beautiful 1956 Maserati A6G Zagato; and the remarkable 1966 Ferrari 365P Berlinetta Speciale, also known as the “Tre Posti” because of its three-seat setup, similar to the McLaren F1, of which a 1997 GTR version was also in attendance. 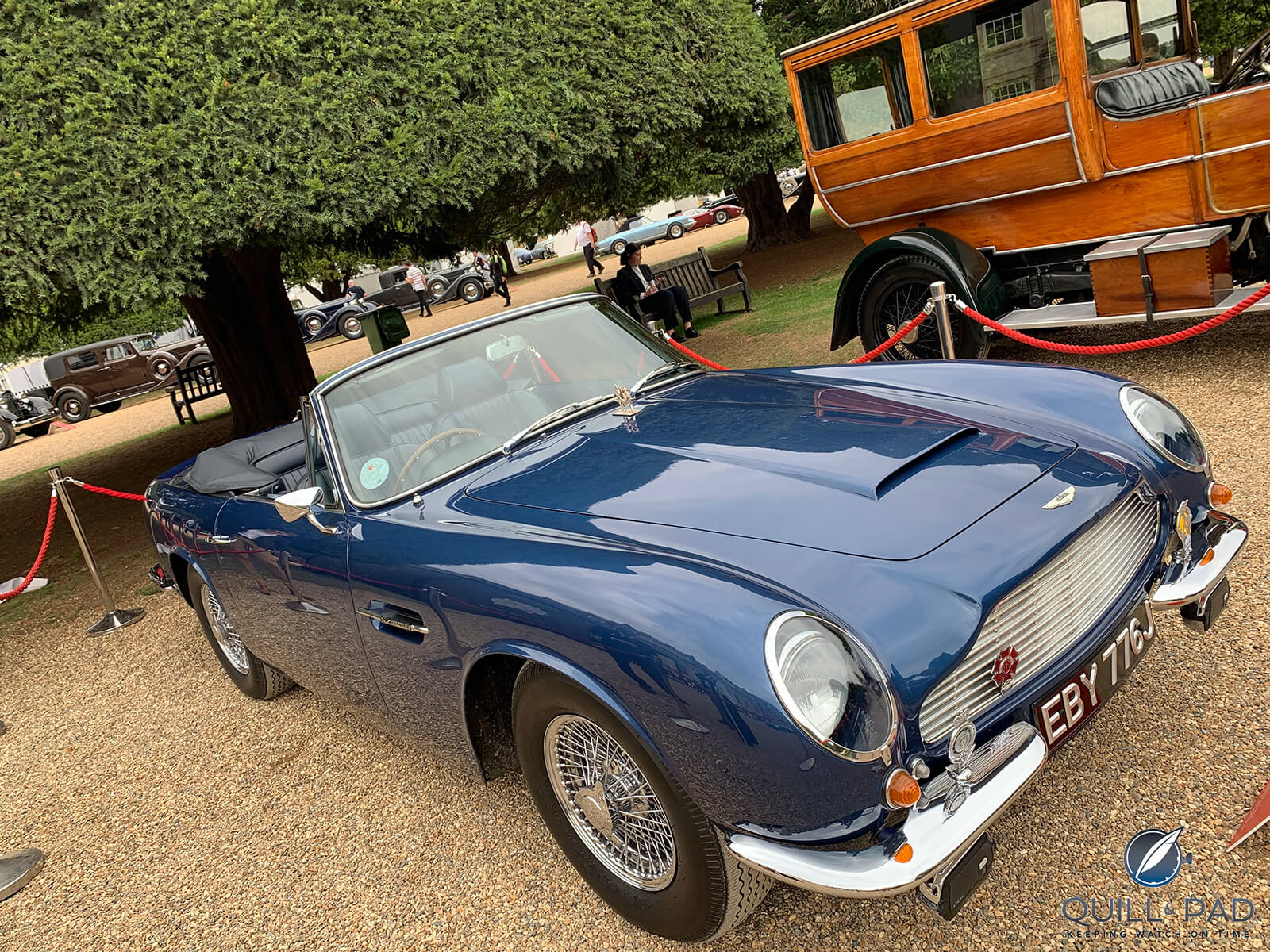 Royal presence came not only with Prince Michael of Kent, the patron of the Concours of Elegance, but also with a certain 1969 Aston Martin DB6 Volante: this car was given to Prince Charles in 1970 as a twenty-first birthday gift from his mother, Queen Elizabeth. It was Formula 1 champion Graham Hill who taught Charles how to drive it. In more recent years, the car famously accompanied the Duke and Duchess of Cambridge – William and Kate – on their wedding day.

A. Lange & Söhne 1815 Chronograph Hampton Court Edition: a good cause

A. Lange & Söhne is very committed to education. Schmid sees this as the key to solving most problems humankind faces these days. For the brand, it is vital to train a new generation of watchmakers that can continue to build and service A. Lange & Söhne’s watches and perpetuate the legacy.

As A. Lange & Söhne is interested in supporting educational opportunities in a broader way and helping to facilitate a better future for more people, the brand decided to create a unique watch for the Hampton Court Concours of Elegance. According to Schmid, selecting the charity to benefit from the proceeds of the auction was not difficult. “The Prince’s Trust, founded by Prince Charles in 1976, has a stellar track record in ensuring that the funds get used where they do the most good,” he explained. “Helping young people to find their vocation in life even when they are facing difficult circumstances.” Making a unique watch to help achieve that feels for Schmid like a good way of giving back and contributing to making the world a better place. 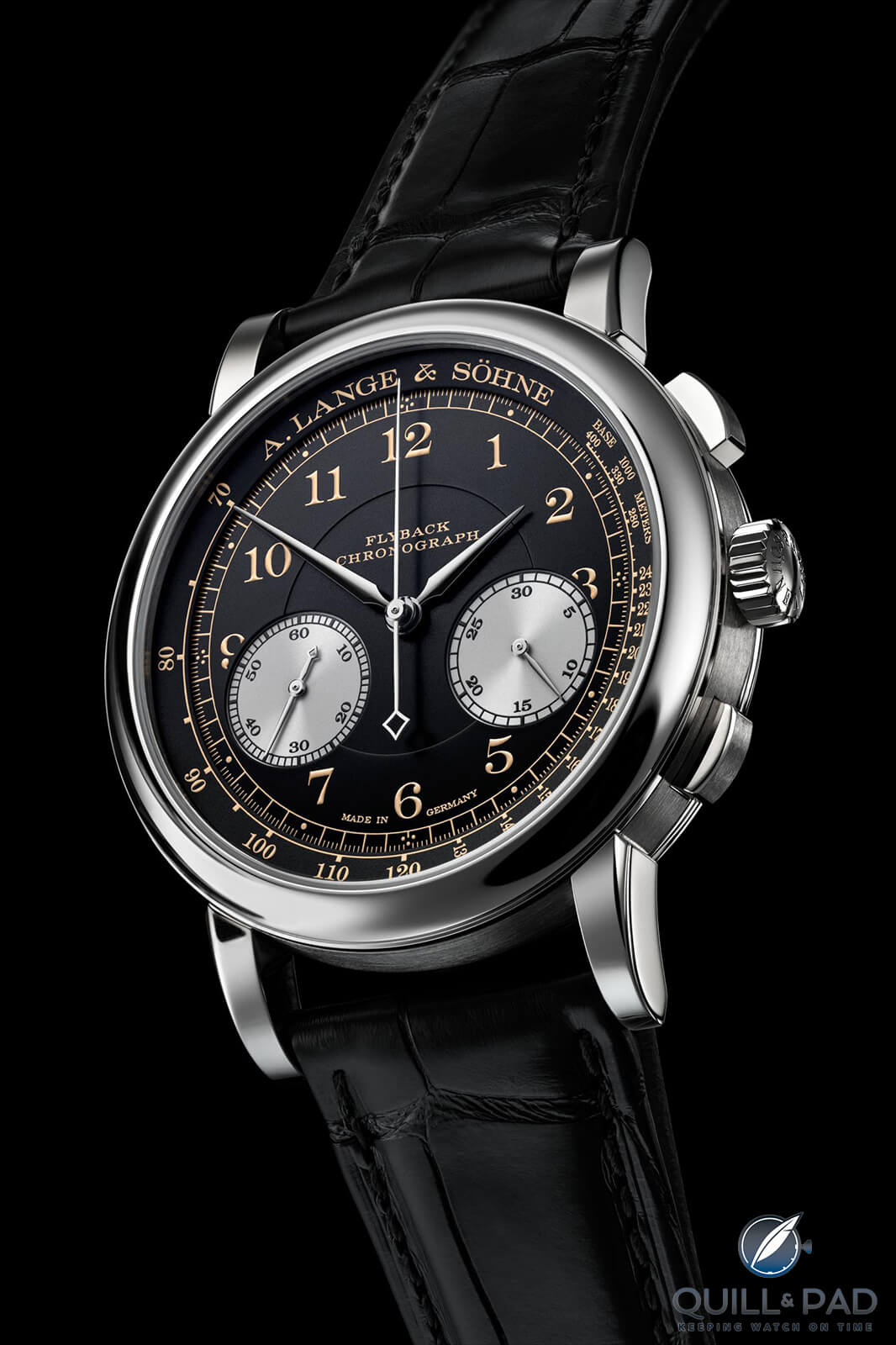 The 1815 Chronograph Hampton Court Edition offers everything we already know from this flyback chronograph, yet with a few distinct differences. Most noticeable is the black dial, which now features sandstone-colored numerals. What might look like a detail has a significant impact on the character of the watch. With some imagination, one could easily see this watch on the wrist of Lawrence of Arabia as he drove around the desert in his Rolls-Royce. 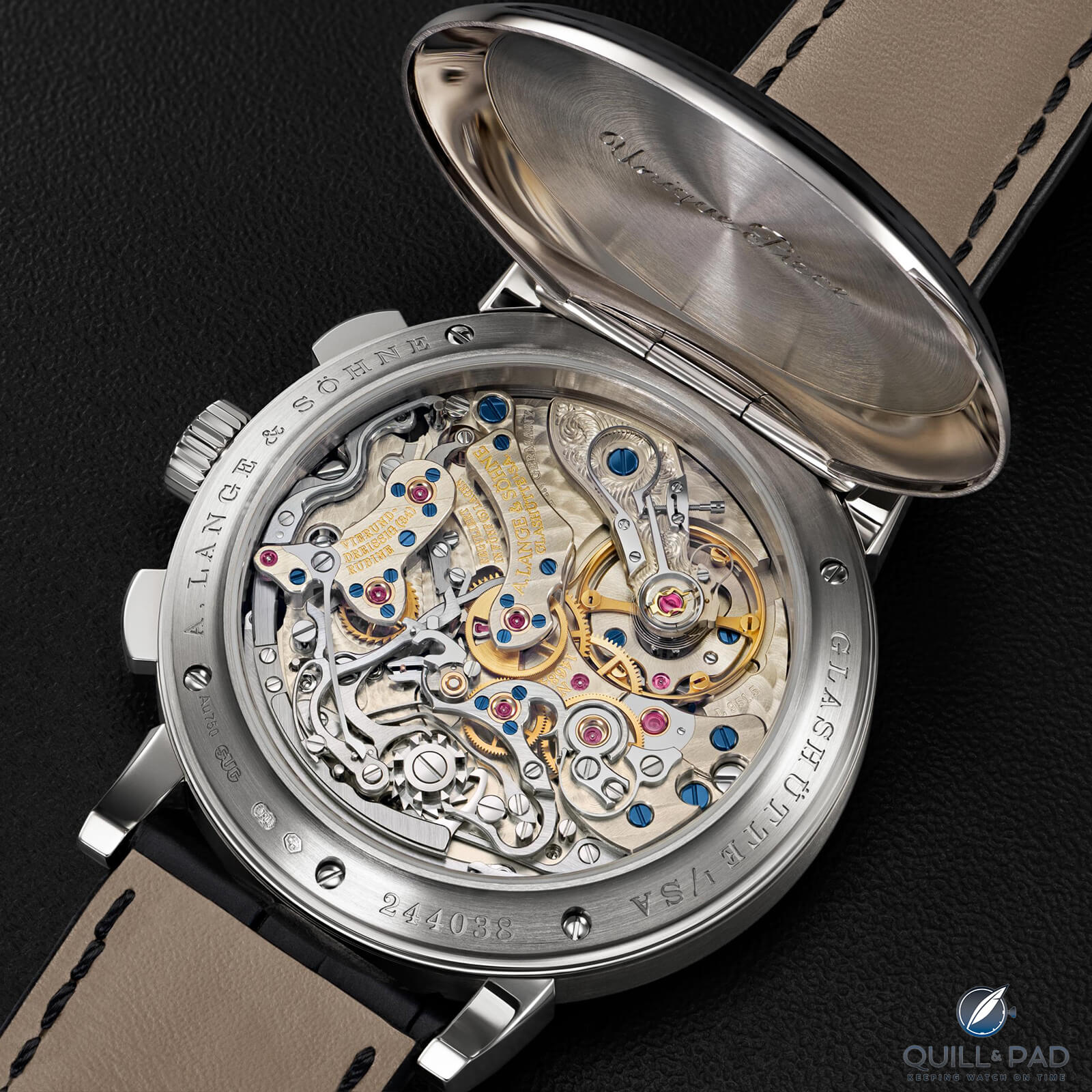 View through the display back under the half-hunter cover of the A. Lange & Söhne 1815 Chronograph Hampton Court Edition

While A. Lange & Söhne matches the white gold case with a black alligator leather strap, I think that one made of cow leather with a nice grain in a color matching that of the numerals would also be quite appealing. 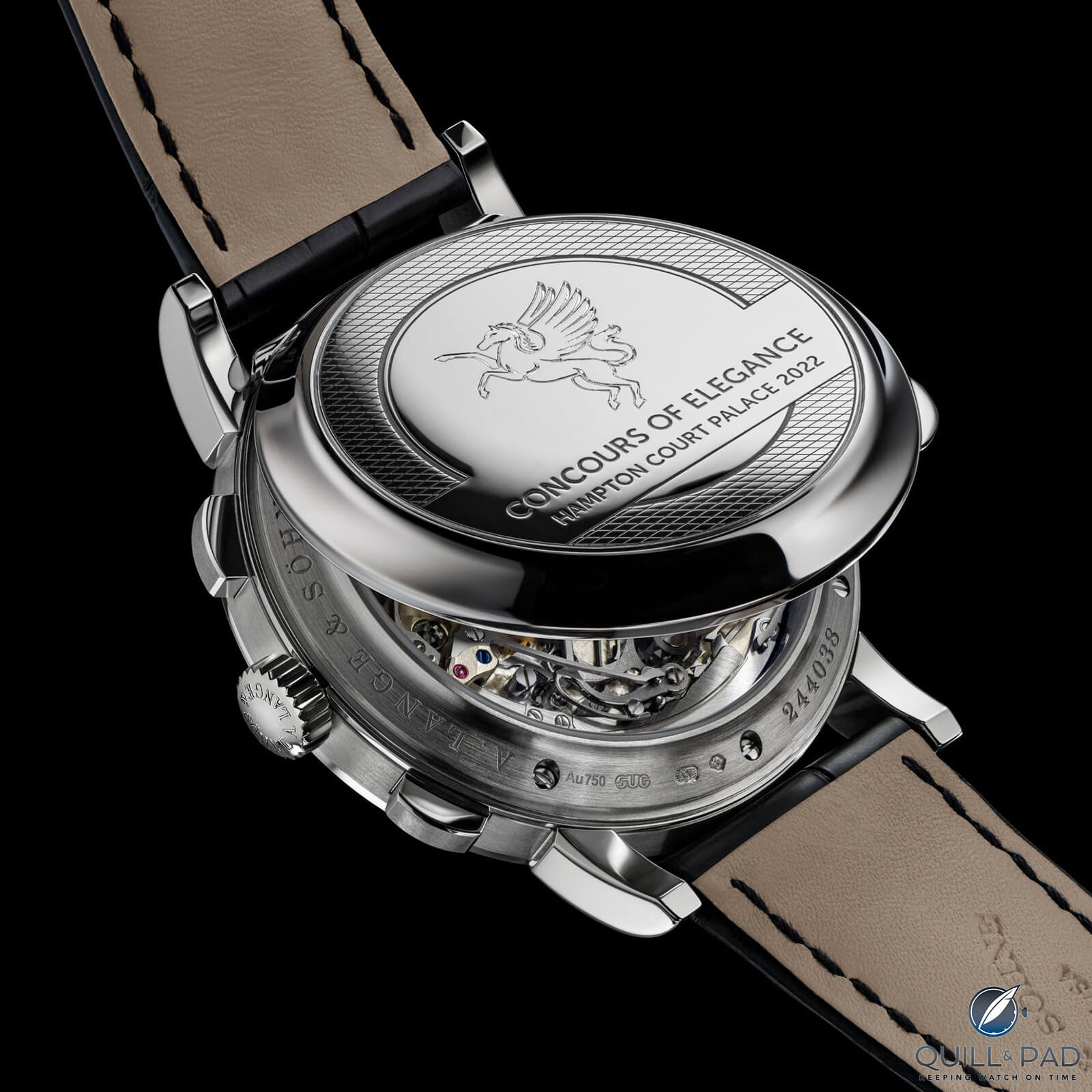 Engraved half-hunter cover over the display back of the A. Lange & Söhne 1815 Chronograph Hampton Court Edition

A. Lange & Söhne continues the theme on the hunter-style case back, which is carefully engraved for the occasion. Underneath, we find the German silver bridges, gold chatons, and blued screws that are part of the refined Caliber L951.5. Clearly visible is also the column wheel that ensures the precise operation of the flyback chronograph. The balance frequency is 2.5 Hz/18,000 vph, which allows the movement to measure the passing of time to one-fifth of a second. 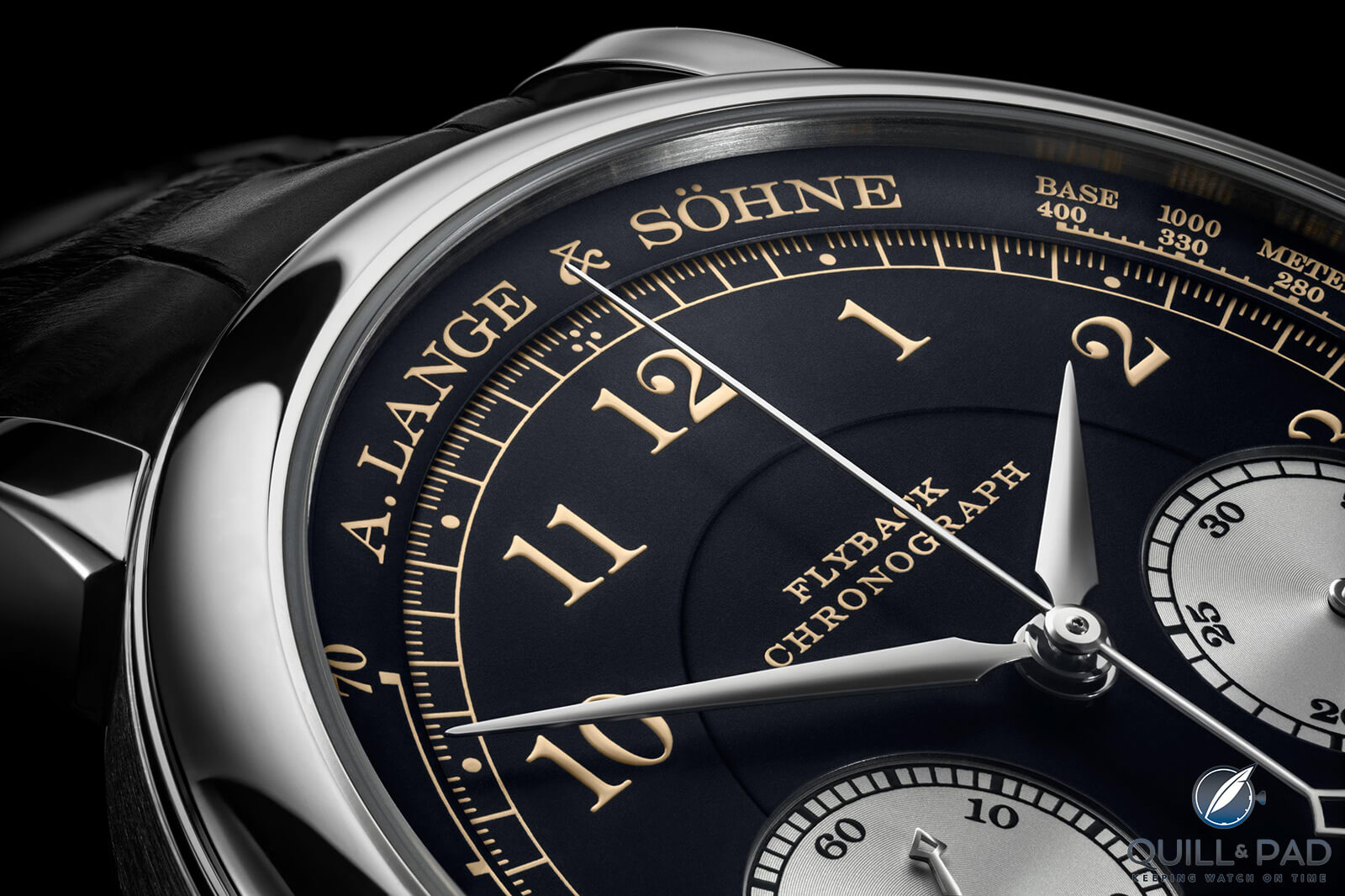 Unique pieces made by A. Lange & Söhne are a true rarity. The good-looking 1815 Chronograph Hampton Court Edition might be based on an existing model, but it differs more than enough to spark broad interest.

This watch is scheduled to be auctioned on November 6, 2022 by Phillips in association with Bacs & Russo in the Geneva Watch Auction XVI with all proceeds going toward The Prince’s Trust.

You Are There: A. Lange & Söhne At Classic Days, Debuts Lange 1 Daymatic 25th Anniversary

Collecting Watches And Cars: What’s The Same And What’s Different?