A. Lange & Söhne Datograph Perpetual Tourbillon: A Machine With Heart And Soul

The A. Lange & Söhne Datograph Perpetual Tourbillon lives up to its name. It has a date, a chronograph, a perpetual calendar, and a tourbillon. But it has more: this watch has character. Assigning human traits to a cold machine is a – romantic – fool’s errand, but it’s also irresistible in the presence of a masterpiece. A. Lange & Söhne’s warmest watch is more than a machine with a heartbeat. It has soul. 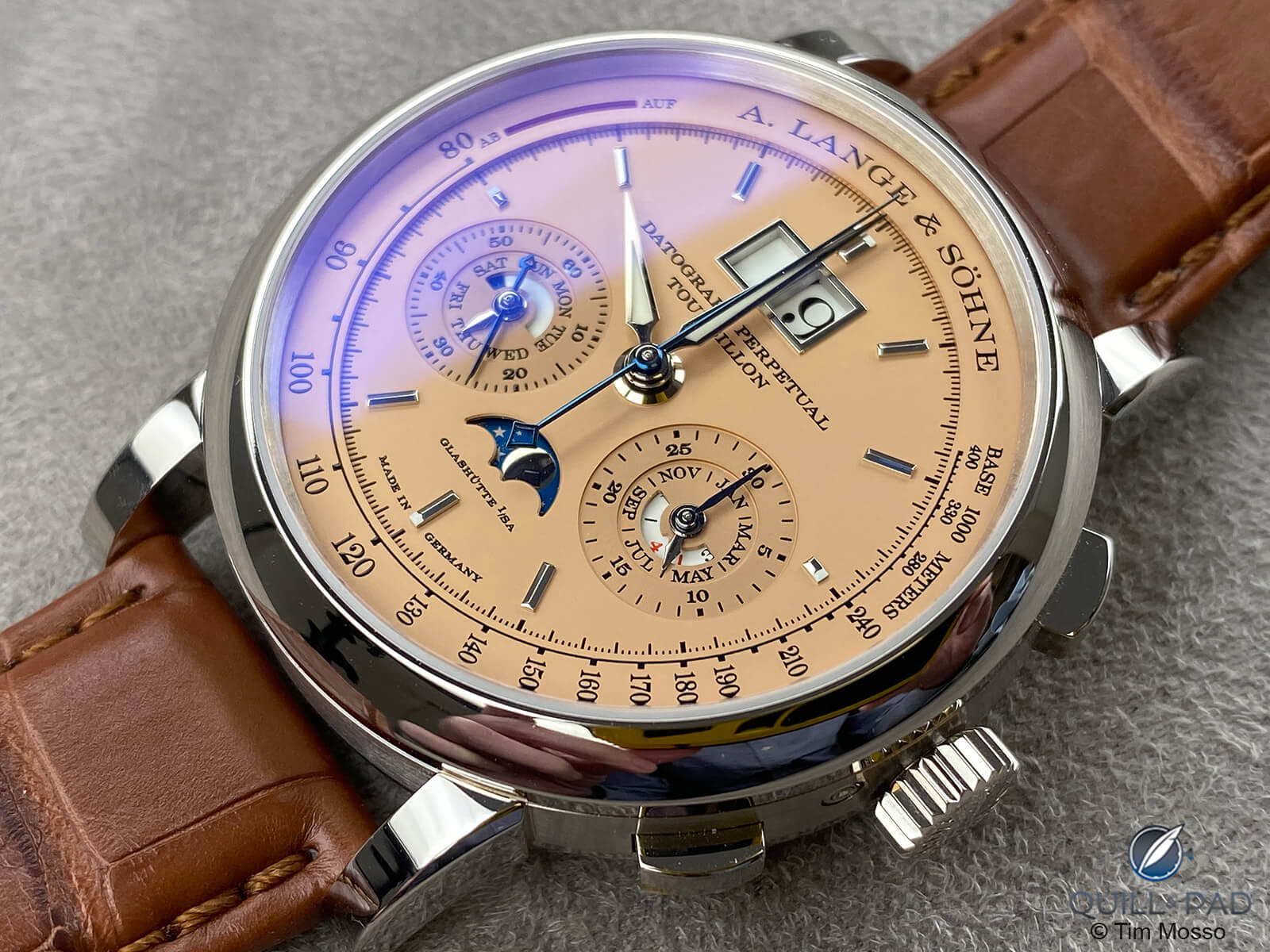 At Basel 1999, the first 39 mm Datograph hit Swiss watchmakers like a seismic shock. A perpetual calendar variation arrived in 2006, and a controversial redesign – the 41 mm Datograph Up/Down – arrived in 2012. The first Datograph Perpetual Tourbillon arrived in 2016 as a platinum limited edition of 100 pieces. And today’s subject, a 100-piece edition in white gold, was announced at SIHH 2019.

Salmon-dial watches had a moment from 2018 through 2020. Some were better than others, but the Datograph Perpetual Tourbillon may have been the best. It’s gold – literally and figuratively. While most Lange dials are cut from sterling silver and then galvanized to achieve their final colors, salmon-dialed – pink gold-dialed – products of the Saxon manufacture are exactly what they appear to be. This 18-karat medallion adds an element of decadence to a watch that already borders on baroque. 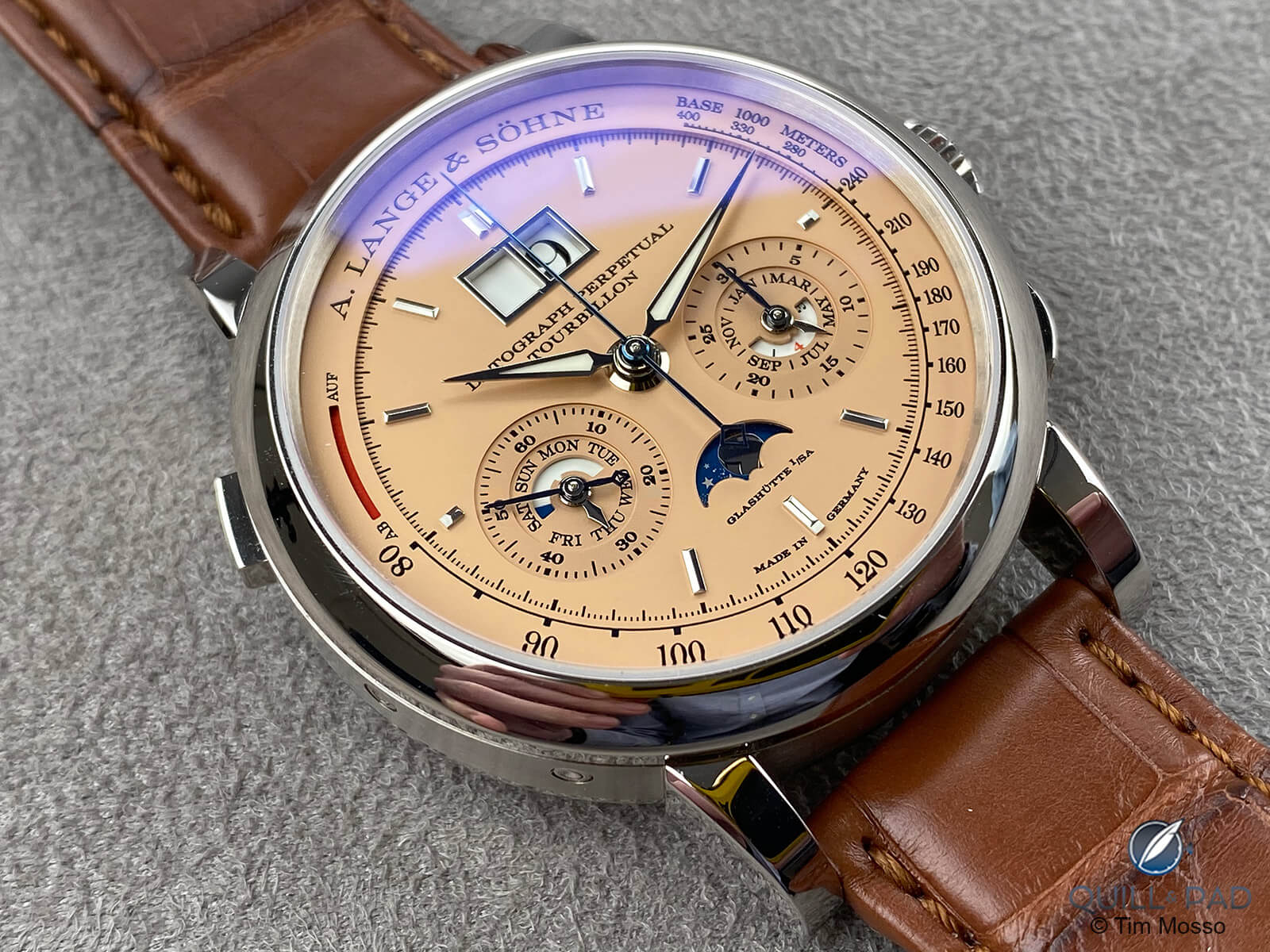 While 41.5 mm is large for an A. Lange & Söhne product, it’s barely enough to contain all the action on the face of this watch. Starting from the outside and working in, wandering eyes first encounter the raised tachymeter scale. It’s a sporty flourish on a dress complication and can be used to gauge speed. Along the 10 o’clock arc of the tachymeter, there’s a subtle power reserve indicator. At 12 o’clock, there’s a white gold frame around the large double-digit date that’s been a Lange signature element since 1994. Each hour index is a white gold appliqué. 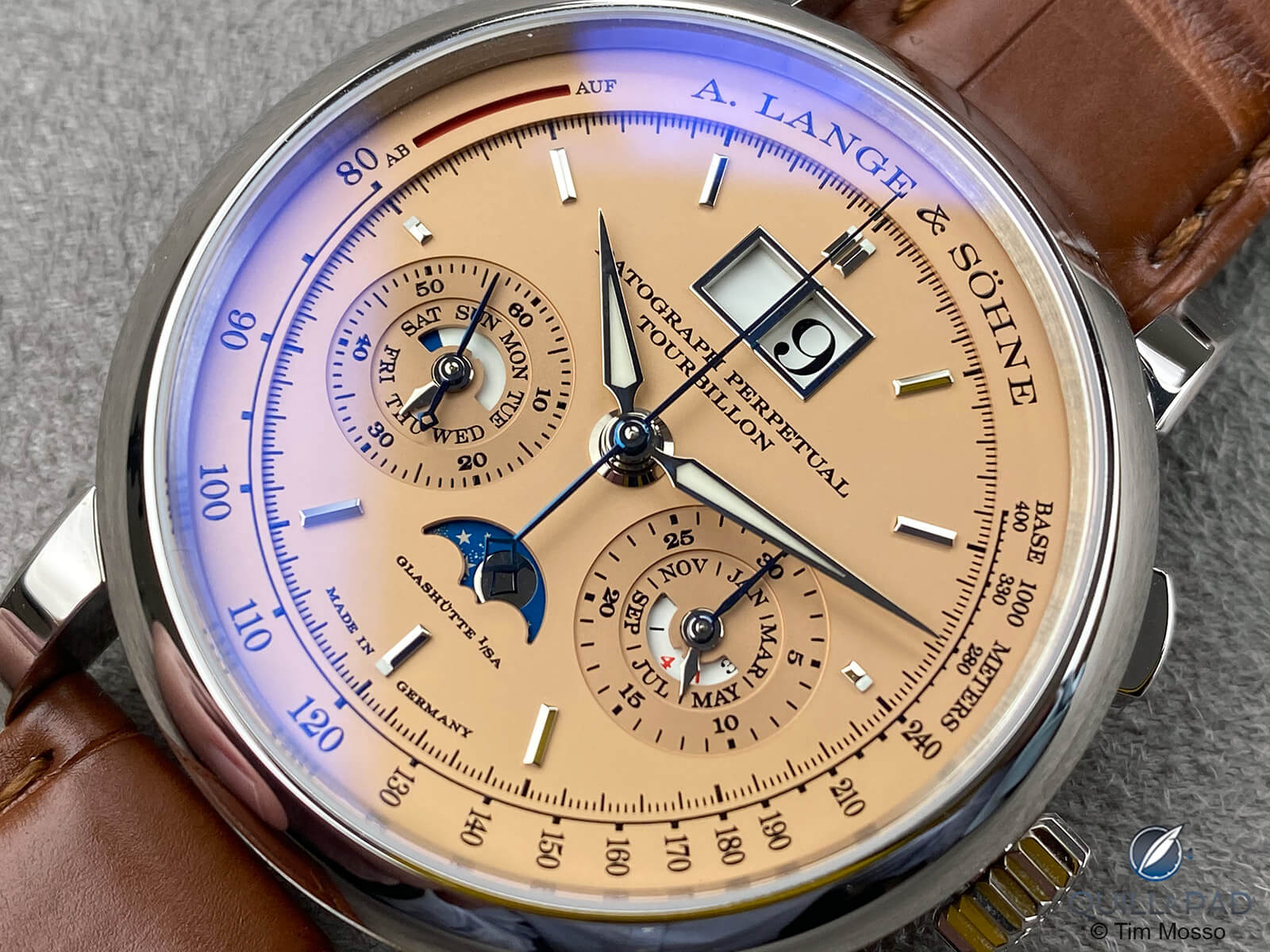 At 8 o’clock, a subdial keeps track of running seconds, the day of the week, and day/night (for setting the calendar). A corresponding subdial at 4 o’clock includes the month, leap year, and chronograph minutes. Lange moon phase disks are made of 18-karat gold, and that’s exactly what resides in the aperture at 6 o’clock. Alpha-style hands grace the center dial and, along with the four corners, these hands are luminescent.

It’s a testament to the ingenuity and discipline of the development staff that so much functionality can be added without altering the dial balance of the standard Datograph. 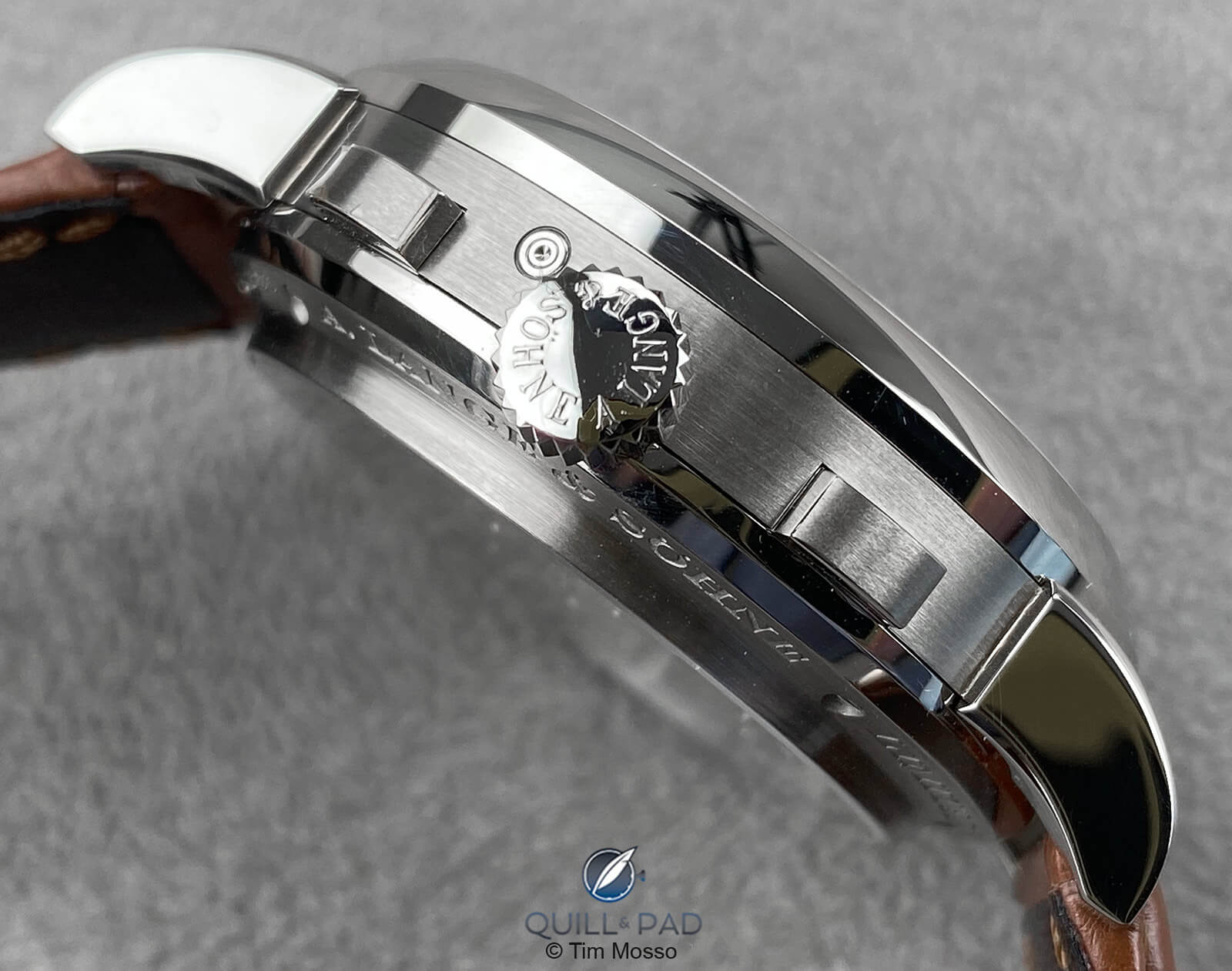 Crown and case band of the A. Lange & Söhne Datograph Perpetual Tourbillon

If the Datograph Perpetual Tourbillon has a weakness, it’s the case. Although well made and properly finished, this white gold carapace also is thick and generic: almost 15 mm of vertical bloat is too much for a dress watch and it upsets the balance of the watch on smaller wrists. Girth is the sole reason that this nominally 41.5 mm timepiece wears like an oversized model measuring 43 to 44 mm in diameter. 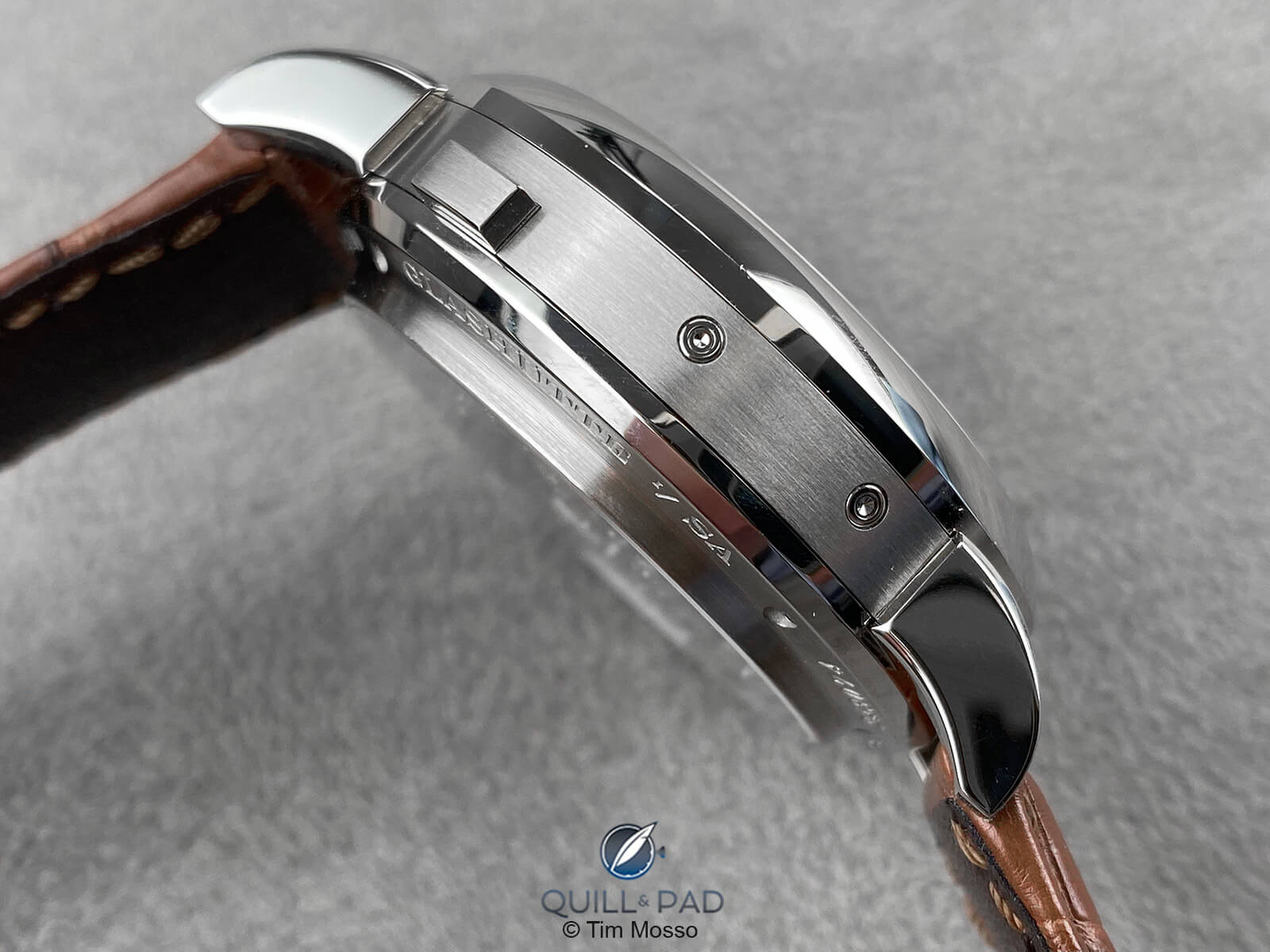 Calendar correction pushers on the case band of the A. Lange & Söhne Datograph Perpetual Tourbillon

And then there’s the shape, which has become too familiar. With few exceptions, this round case/stepped lug design has been iterated across so many disparate models for 28 years that it becomes an occasional liability. On a manual-wind 1815, you appreciate the finish and the value for money. But when your $300,000 watch is stuck in the body of a machine one-tenth that price, the impression is that somebody in Glashütte ran out of money or took the easy way out. A generic profile doesn’t ruin the watch, but it’s the Datograph Perpetual Tourbillon’s standout weakness.

Then again, imperfection is endearing. It’s what makes us human. And it’s equally a reason that the Datograph feels so soulful. Perfect is a Honda Accord, a Texas Instruments calculator, or a Rolex Submariner. Creating a stunner without a blank check is a feat to be admired, and Lange’s watchmakers chose to put their money where it matters most: the movement.

“Caliber L952.2” isn’t a sexy name, but those who know break out in sweat. As with the 850CSi and G63 6×6 engines, a German design team has hidden an eye-watering amount of engineering behind an innocuous acronym.

Movement of the A. Lange & Söhne Datograph Perpetual Tourbillon

The heart of every Datograph is its chronograph function. As with other Dato models, the chronograph in the Datograph Perpetual Tourbillon is a flyback unit that can reset without pausing. Lange employs a fresh column wheel that rewards every click with a crisp report. The lateral clutch isn’t as seamless in operation as a vertical unit, but it’s more beautiful and more demanding for a watchmaker to tune. Yet again, beautiful imperfection prevails.

Perpetual calendars vary from brand to brand, but Lange’s is a standout. First, it’s an instantaneous jump system, which is an order of magnitude more difficult to achieve than a dragging display. In addition to its mechanical programming until the year 2100, the Lange Perpetual adds a moon phase that’s set-it-and-forget-it reliable for more than 122 years. For the sake of convenience, a pusher on the case flank moves all the displays in sync. If the watch stops for four days, simply wind, click four times, and then set the hands.

Not every tourbillon is created equal, and the Datograph Perpetual Tourbillon’s regulator is proudly superior to most. Consider the endstone atop the cage: it’s a genuine brilliant-cut diamond. The tourbillon carriage takes the form of an historic wire-style cage, and there’s an overcoil to even out positional variation. And while the hacking seconds feature no longer is as rare on tourbillons as it used to be, it remains a thrill to see. 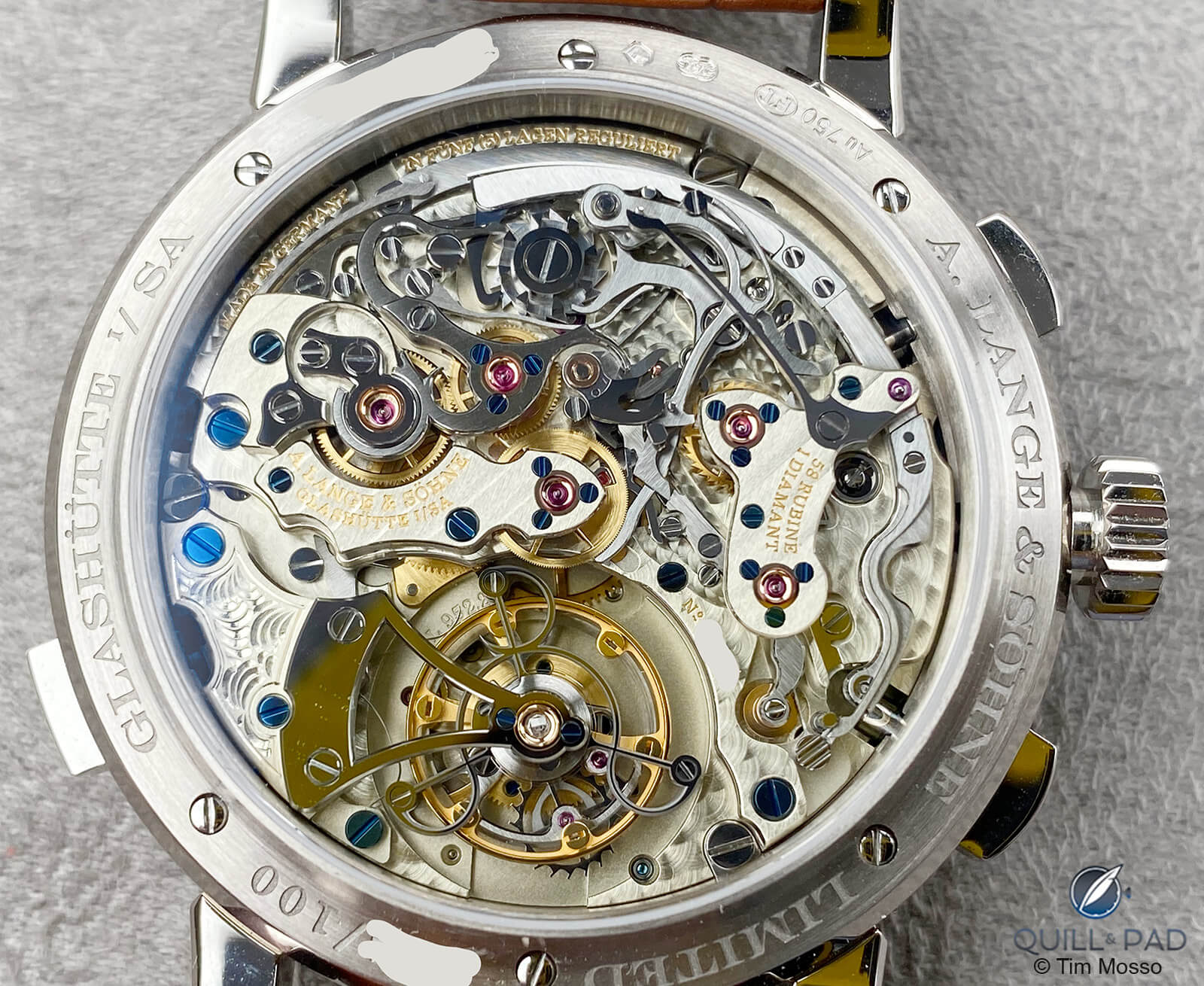 Movement of the A. Lange & Söhne Datograph Perpetual Tourbillon

Finish matters, and the Datograph’s original Caliber L951’s stunning finish shocked and appalled many in Swiss watchmaking when it debuted in 1999. Back then, it was a watershed moment for the industry – a wake-up call – and it’s no coincidence that Swiss haute horlogerie movement finishing took huge reactionary steps forward in the early 2000s.

Today, the L952.2 upholds the reputation of Germany’s foremost watchmaker. While no longer revolutionary, Lange finishing still ranks among the best. All bridges glow with a golden hue of German silver, an alloy of nickel, zinc, and copper that evokes the pocket watches of pre-war German artisans. Engine turning graces the base plate, mirrored bevels distinguish the bridges, and stripes – we won’t call them côtes de Genève here, but rather Glashütte ribbing – add definition to the flat expanses.

Of particular interest is the chronograph clutch. As a steel component, this lever is a more challenging assignment to finish than a maillechort bridge. The sharp interior bevels and exterior points rank first among the standout aesthetic features of this caliber. Entire Geneva Seal movements hit the market without a single sharp bevel convergence, and the Datograph Perpetual Tourbillon has a quiver of them on one part alone. Lange’s clutch also includes one of the L952.2’s many chaton jewel mountings. While unnecessary from a technical standpoint, they’re evocative of a more primitive and soulful era of watchmaking.

Color is a highlight of the Datograph’s movement. Golden bridges meet fuchsia pivot ruby jewels. Fire-blued steel screws glow intensely amid white steel and pale-yellow German silver. Black polish blinds and dazzles. This mirror-like “black” surfacing stands out starkly on the tourbillon bridge. When held at the right angle, each mirrored plane appears perfectly black. One of these sits adjacent to the showpiece center of every Lange movement, the hand-engraved balance cock.

In short, the Datograph Perpetual Tourbillon is a colorful character with a one-third-of-a-million-dollar smile. 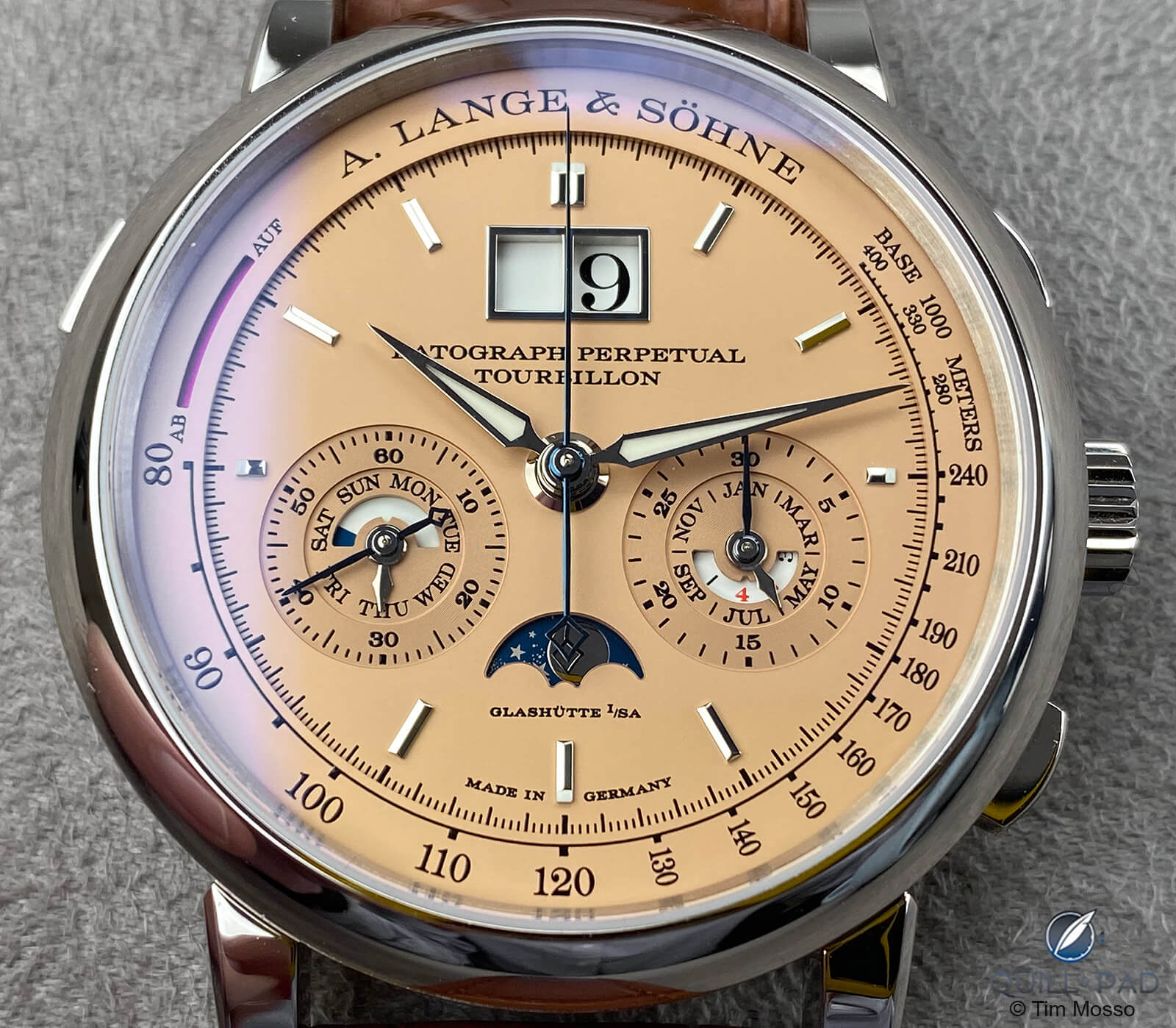 Value among luxuries is hard to define. It’s personal, subjective, and amorphous. That goes double when discussing watches that cost real estate money. As an act of financial self-sabotage, this A. Lange & Söhne is a beautiful way to go broke. And if one were to nuke the 401K and sell a redundant organ to make this dream a reality, take comfort in the knowledge that soul is priceless.

Tim Mosso is the media director at Watchbox; you can find his video reviews at https://tv.thewatchbox.com/reviews.

Elizabeth’s Top 10 Watches Of 2021: A Few You Might Expect And A Few Surprises

Why I Bought It: A. Lange & Söhne Datograph Perpetual In White Gold