As so often happens in Hollywood, movie and television franchises sometimes get rebooted if they are very popular. Dallas, The Wonder Years, How I Met Your Mother, the X-Files, and even Doctor Who have all gotten reboots on the small screen. Not to mention classic fantasy films such as Godzilla, Mad Max, Spider-Man, Batman, and Superman, which have all had successful reboots years or decades after they came out.

Some franchises like James Bond are practically built on reboots as each new Bond actor creates his unique take on the character. Since Ian Fleming only wrote 12 novels and nine short stories, the remainder of the more than 70 Bond novels and short stories were completed by other authors, meaning that tone and themes were already up for reinterpretation in literary form. The silver screen trend of rebooting the franchise was a perfect fit and allowed various actors to canonically play the character and never mess with continuity since each new actor was a new Bond.

Spider-Man is another film franchise that has seen multiple reboots, only now we learn that (spoiler alert) each version of the character is the real Spider-Man, just from an alternate universe. In that case it isn’t so much a reboot as a rebirth, each version having its own story and origin while the others exist simultaneously (in what the Marvel Cinematic Universe calls the Multiverse). I feel that has a lot of meaning because each iteration has a ton of similarities, not just with the character but with individual personalities, tragedies, and overarching goals. It shows that those who become Spider-Man overlap in meaningful ways and even though they are their own person shared traits link them in crucial ways. 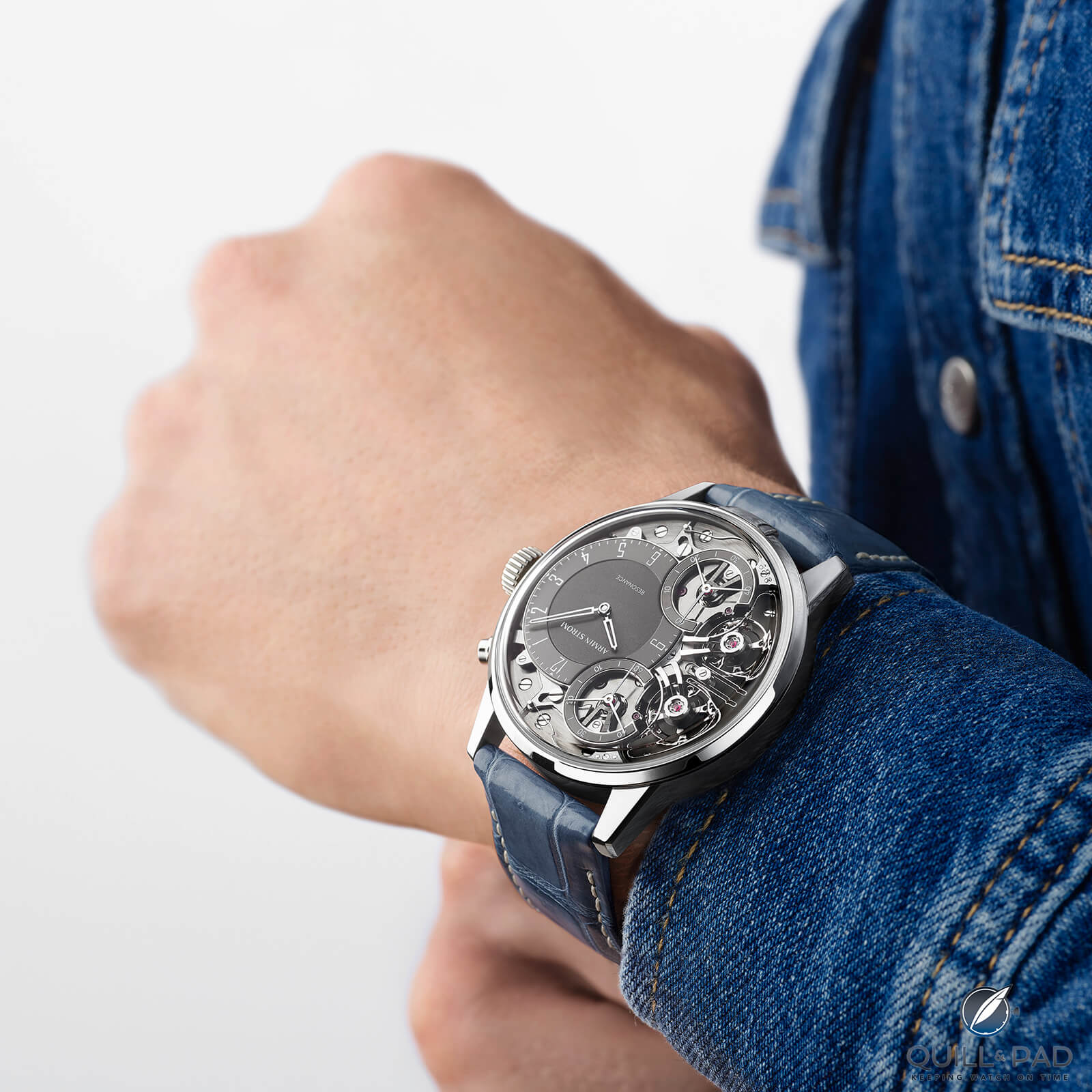 In case the Marvel Cinematic Universe analogy doesn’t adequately convey what I mean, the new Mirrored Force Resonance First Edition feels like what would happen if the original model was designed in an alternate universe that is very similar but had different aesthetic goals to ours. This should be obvious by the architectural updates to the movement and overall design: the new piece is the original Mirrored Force Resonance with redesigned dial, hands, case, and underlying movement – even though the mechanical layout remains generally similar between the two. 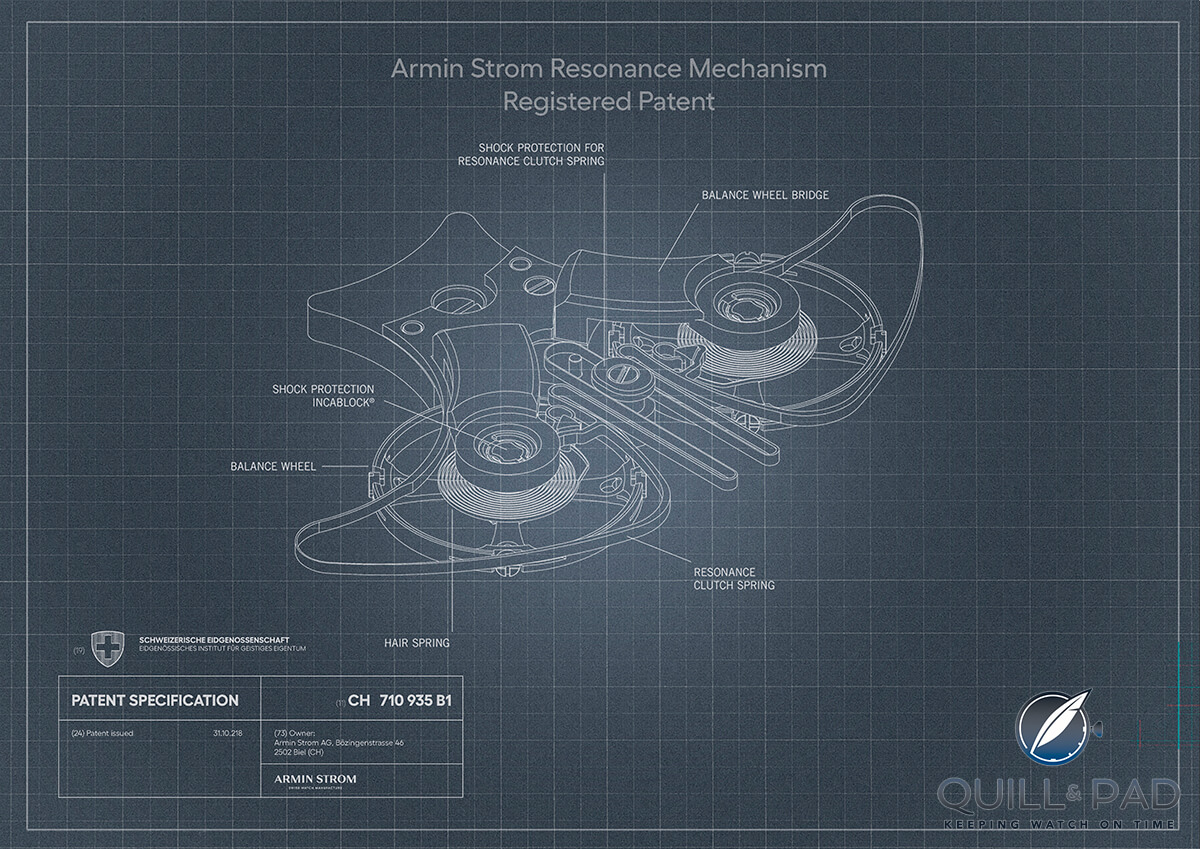 Twin oscillators connected via the patented Resonance Clutch Spring are still the main focus of the piece and represent the core horological pursuit of Armin Strom going forward: Armin Strom is reorganizing the brand around the pursuit of technological innovation and engineering accomplishments found within the Mirrored Force Resonance concept. It can be seen in the Gravity Equal Force and the interesting new Orbit that the Mirrored Force Resonance is the driving concept. This is why the kickoff for this new shift came with the release of the Resonance Zeitgeist, a unique piece acting as a bridge between the original model and the new direction, so named to capture the zeitgeist within Armin Strom. 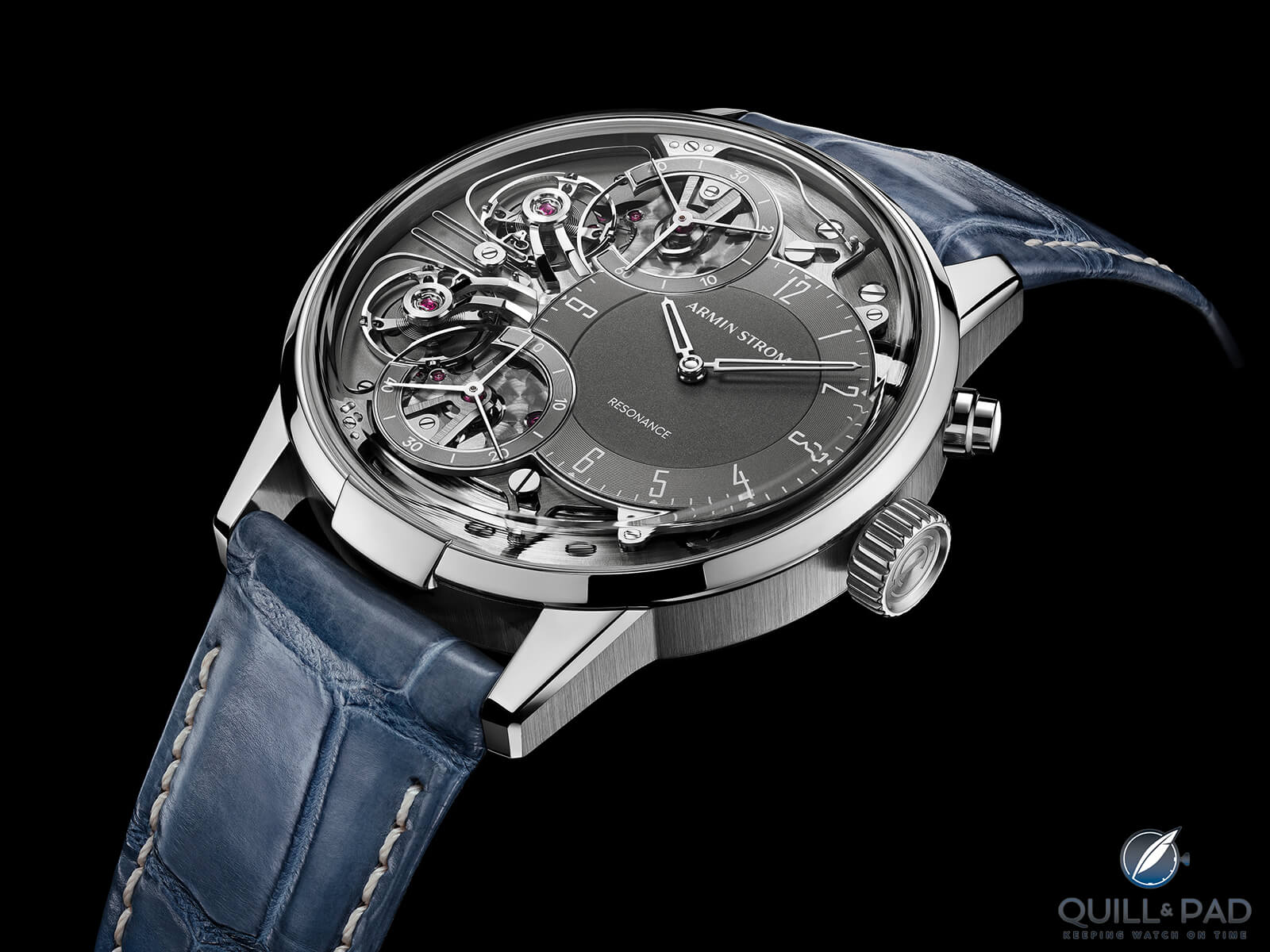 The Mirrored Force Resonance First Edition still displays the hours and minutes on an off-centered dial with twin continuous dials for seconds running in opposite directions and separating the resonance mechanism from the dial. The dials for seconds can be reset and synchronized via pusher at 2 o’clock, which allows verification of the resonant rates as well as indication of any deviation from a shock or disturbance.

As a reminder of why the Mirrored Force Resonance concept is so special in the first place: those continuous dials for seconds help highlight and quantify the primary achievement of the Resonance Clutch Spring, which is the ability to naturally link the two oscillators for a more stable rate. I’ve written about the resonance phenomenon many times before, but the basic idea is that two oscillators arranged in such a way that they are influenced by each other will have their beat rate drift until they become synchronized in their oscillation. Then each balance will resist drifting from that beat rate thanks to tiny vibrational inputs from the other, providing a stabilizing feedback loop. 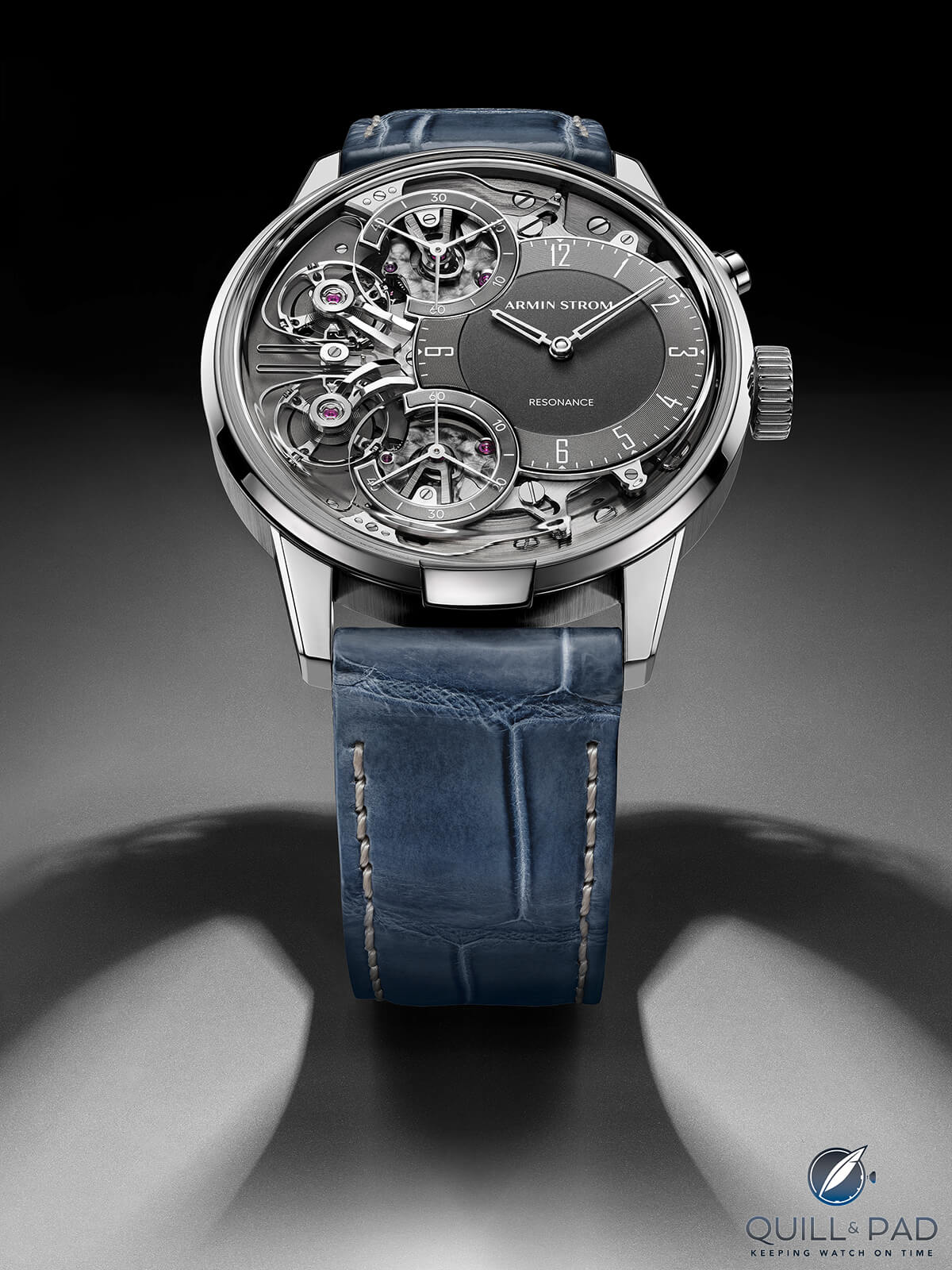 Resonance is the phenomenon that underlies all watches and clocks with a balance spring, but only in a resonance watch do the more subtle influences get to shine. The Resonance Clutch Spring is the physical link between these two oscillators, and its precise geometry allows each balance to transmit a small amount of energy to the opposite balance’s hairspring, adjusting it a minute amount to push or pull the rate into synchronism. A much deeper dive into the principles can be found in my article Understanding Resonance, Featuring The F.P. Journe Chronomètre à Résonance, Armin Strom Mirrored Force Resonance, And Haldimann H2 Flying Resonance, but suffice it to say that the approach that Armin Strom takes to resonance is the most practical answer in a current timepiece – and probably ever.

The Resonance Clutch Spring remains front and center in this attractive reboot, while other aspects have been adjusted, tweaked, or completely redone. The overall case size has gotten smaller, shrinking by almost a half a millimeter in diameter and 1.45 millimeters in thickness, making it more wearable for more wrists. This can be easily seen by the bezel, which is much thinner and makes the dial look larger, and the traditional Armin Strom “lip” at the 6 o’clock position, which is dramatically reduced in the new Armin Strom aesthetic. The lugs now have a straighter, clean profile, and the crown has a new shape with finer fluting and a recessed center that provides a slimmer feel to the touch. 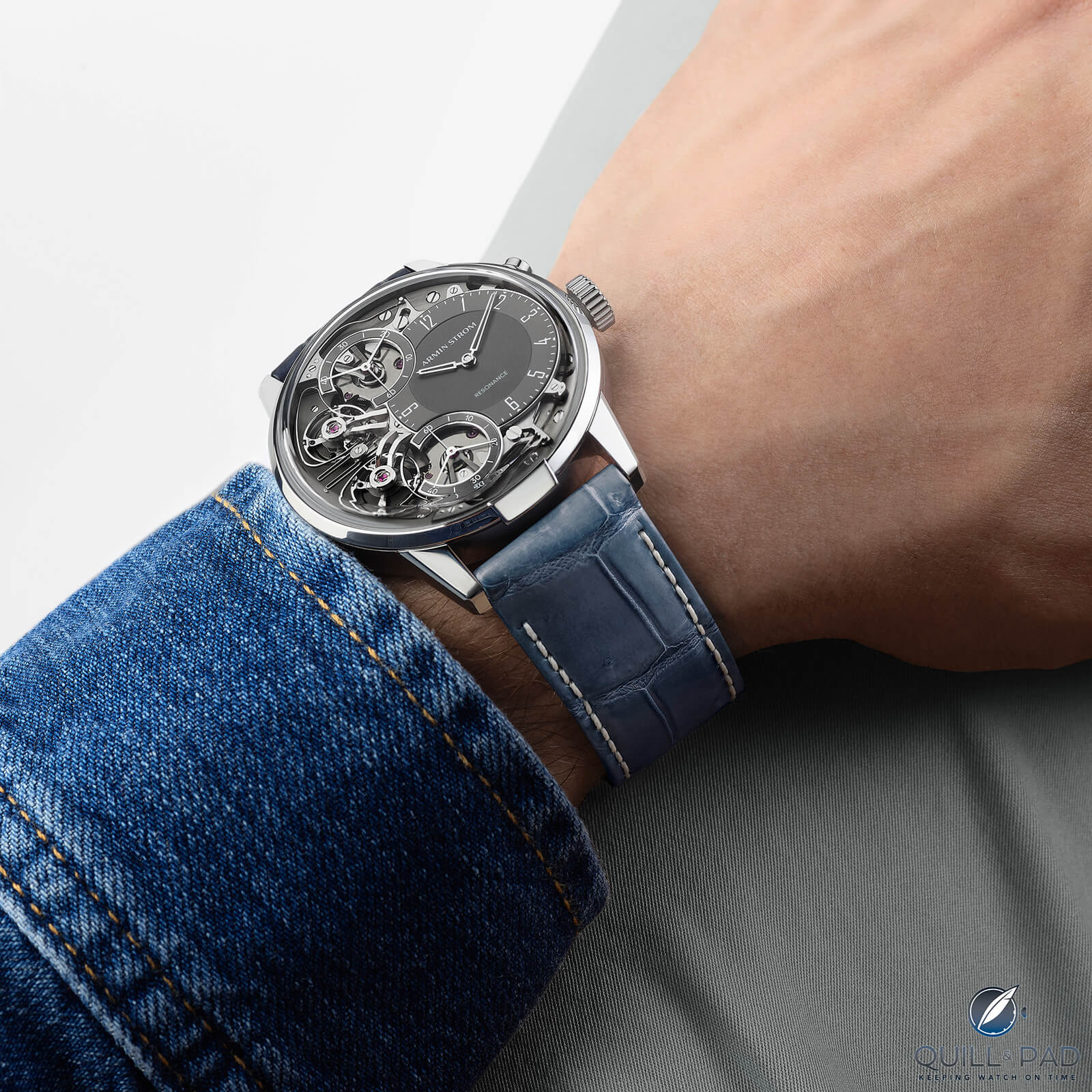 The dials and hands have been updated significantly, simplifying the numerals and markers on the dial. The text has been reduced, and the hands are now a lume-free pair of skeletonized batons with a much slimmer profile (slimming things down seems to be a trend throughout). One could almost say the dials are minimalist but the attention to the details argue otherwise. The dials for seconds are now visually separated with a polished trim, indicating that the dial construction has changed somewhat significantly from the original and is now more complex while appearing simpler.

Comparing side by side, behind the dials we can see that the plates, bridges, springs, and other details have changed significantly, providing ample proof that this is indeed a completely new caliber. A point of note are the bridges supporting the balances and the pivots for the continuous seconds, which have all been openworked to provide a bit more depth to the dial. But the real depth of the Mirrored Force Resonance First Edition can be found on the rear.

Armin Strom’s new Caliber ARF21 is truly the star of this piece, a fact that cannot be denied once you gaze upon the rear of the watch. 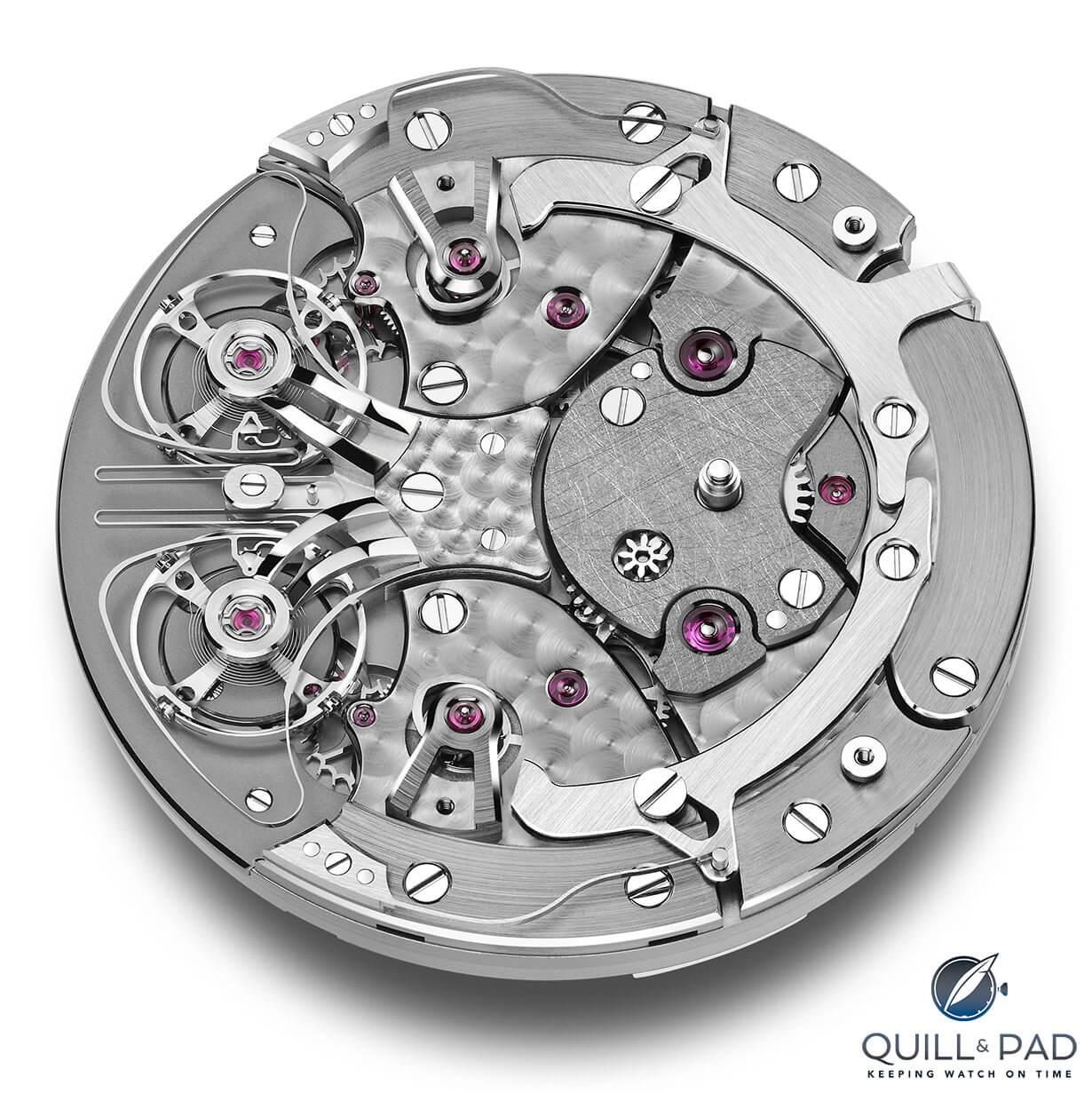 The original caliber was amazing, but the focus was initially on the front of the caliber, highlighting the groundbreaking Resonance Clutch Spring. But now that this technology has six years of exposure, Armin Strom felt it was finally time to give the rear of the caliber something to brag about. And the brand’s engineers did it in a way that reminds me of Greubel Forsey, a brand known for stunning movements. It all comes down to contrast and depth.

Caliber ARF21 takes components that were previously part of one main plate or buried beneath a bridge and exposes them. Now components are supported by prominent standalone bridges, two bearings in white gold, and the others in polished steel. The ratchet wheel now uses the classic design found in grand sonneries, and the wheels going from the ratchet to the twin mainsprings are now exposed and centrally supported, appearing to float between the large barrels. 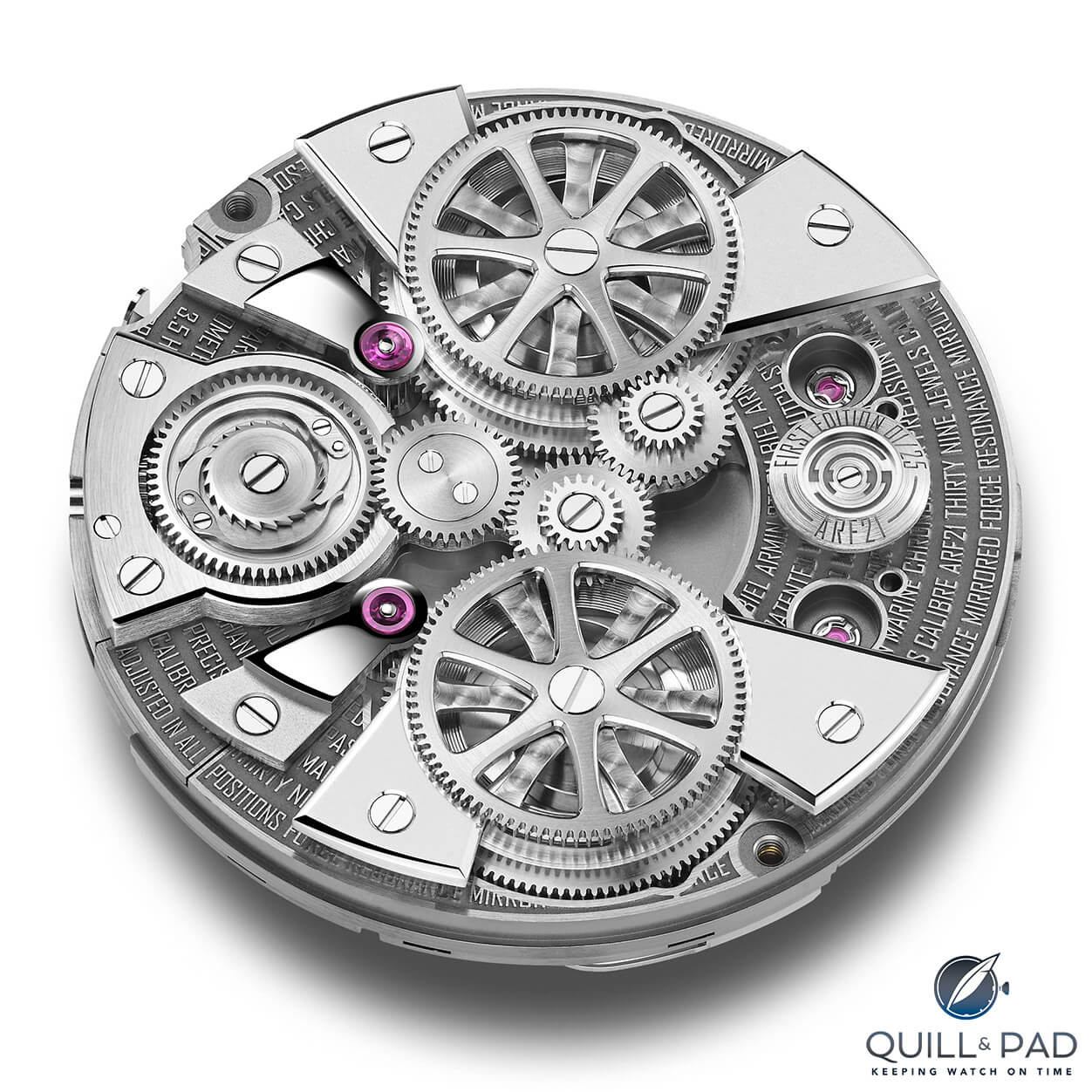 The movement’s two barrels are openworked like before but now bear a much higher level of finish with polished and beveled edges. But the pièce de resistance is the fully engraved recessed plates underneath all of these features that bear text relating to the Mirrored Force Resonance technology. This has become one of my favorite features to see sprinkled into movements, dials, or cases because it allows so much visual texture, contrast, and depth, and this implementation is a maximized version of all of this. The bridges appear to float over the top of the text, and the polished and brushed surfaces of the bridges and plates contrast greatly with the blasted and brushed text engraved below. 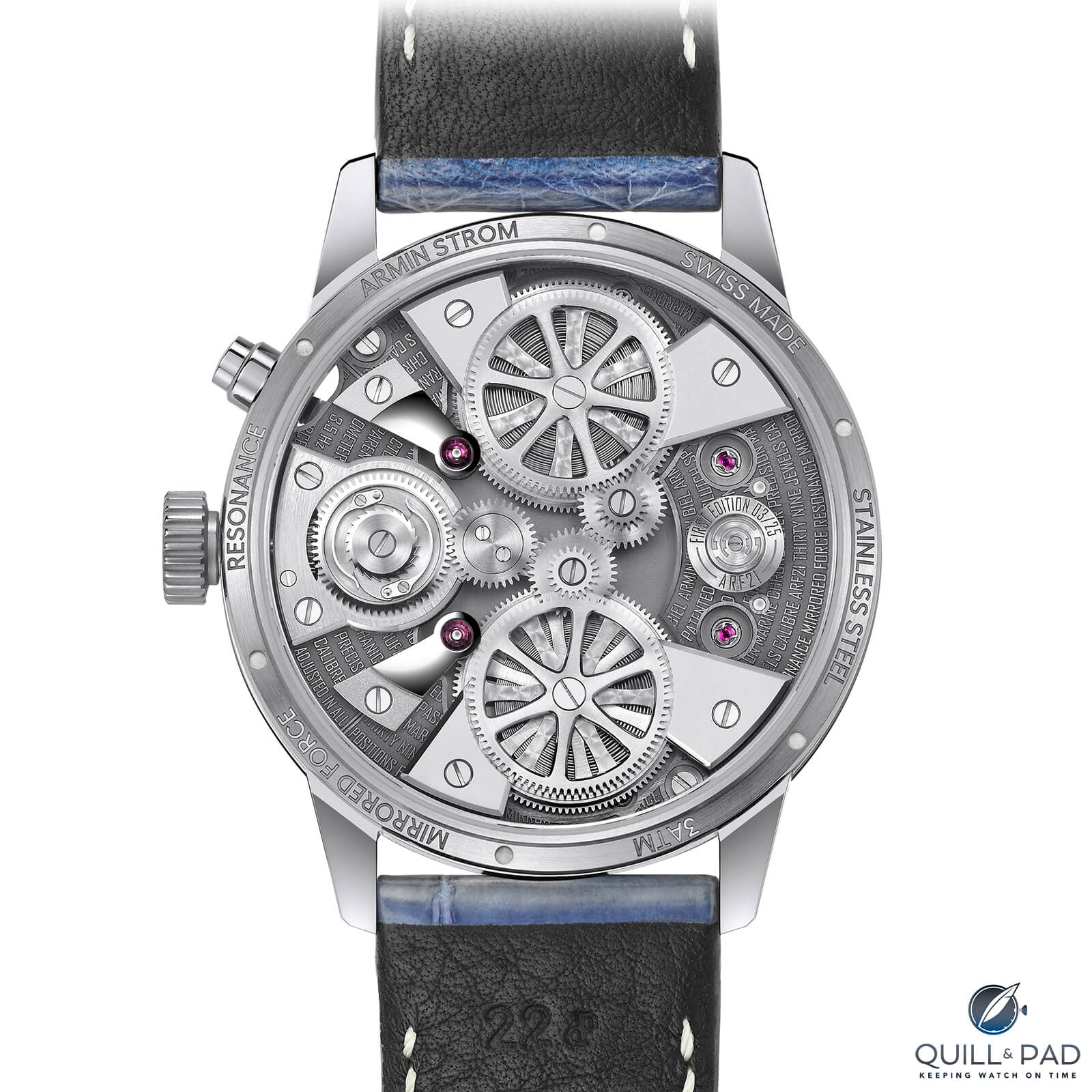 back of the Armin Strom First Edition Mirrored Force Resonance

There is even a little pillar that stands up from the movement and towers over the text like a little mushroom bearing the edition number, Armin Strom logo, and caliber number. All of these details add up to an increditastic visual treat of a movement, something that takes the new caliber to a whole new level of premium horology. And that is saying something when you consider the price of the new Mirrored Force Resonance First Edition.

While by no means cheap, the price is $59,000 / CHF 58,000 for the limited-edition piece. That price represents a reduction from the original model which, in 2016 was listed at CHF 54,000 at the time. Now that doesn’t sound like a reduction in price, but you need to calculate the cost in today’s dollars, which, factoring in six years of inflation, comes out to approximately $64,250, or almost nine percent more (the cost for the model in pink gold adjusted for inflation was $79,750).

That means that with all the improvements in construction, finishing, and thanks to six years of experience, Armin Strom was able to produce a greatly improved product for a better price, showcasing the value that the brand continues to bring to its customers. This is what it all comes down to with the Mirrored Force Resonance First Edition: a recommitment of Armin Strom to make fantastic timepieces and pack a ton of value inside. 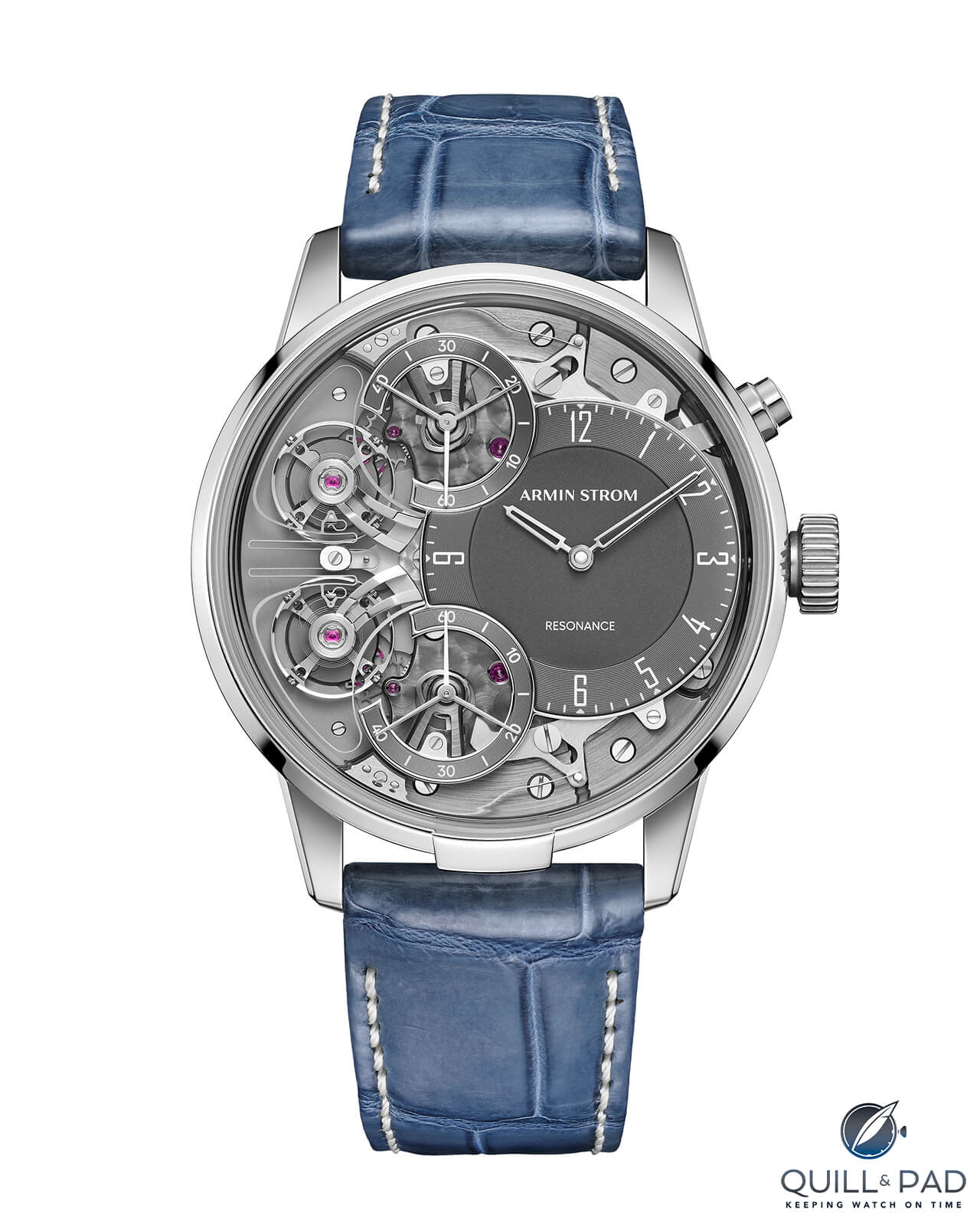 The new piece, just from a visual standpoint, is my favorite Mirrored Force piece to date and quite possibly my favorite from a mechanical standpoint. I know that Armin Strom released the impressive Dual Time Resonance and Minute Repeater Resonance, but the simplicity combined with the mechanical variation of the Mirrored Force Resonance First Edition is simply stunning. Being the “First Edition” also demonstrates how this isn’t the end but is rather the official kickoff of the brand’s next generations of resonance watches.

The Manufacture Edition is sure to ensue, followed by more complicated pieces to make Armin Strom the leader in resonance for the twenty-first century. I know one watchmaker in Geneva who won’t be too happy about that, but Armin Strom has been killing it for years and is poised to be the go-to source for this unique niche of horology for years to come.

But how does this one compare? Let’s break it down to see!

A Watchmaker’s Technical Look At The Mirrored Force Resonance Fire By Armin Strom: A Dual-Balance Watch With A Difference

What Is A Resonance Movement? The Watches TV And Armin Strom Explain (Video)

Monkey 47 Gin: From Failed Watchmaker To Making One Of The Best Gins In The World – Reprise