Available in the Shop: The Hanhart Bronze 417 Chronograph Edition No. 2 “Copperhead” For Revolution & The Rake 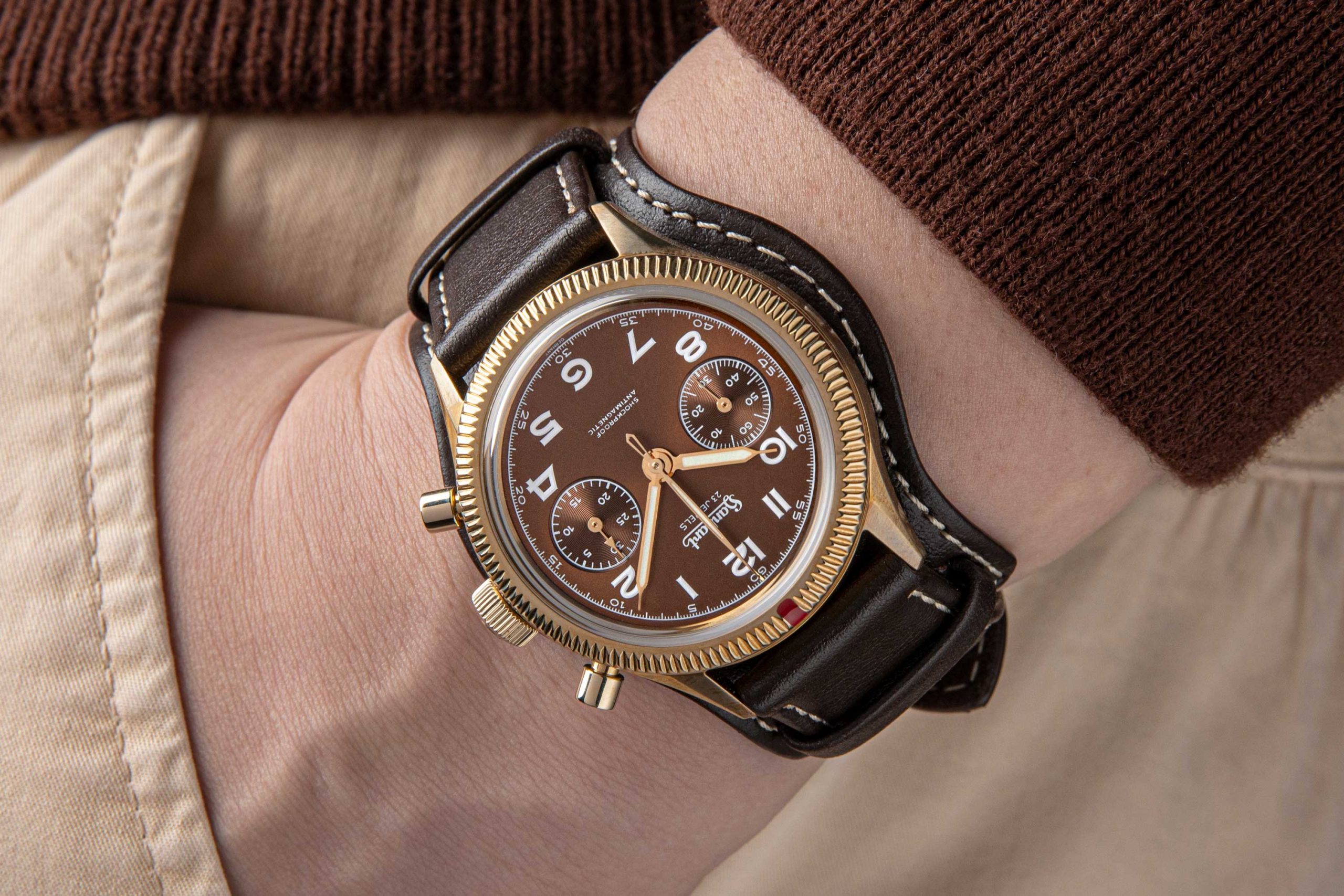 For those of you interested in a little history of the 417, let’s go back in time to 1882 when one Johann A. Hanhart set up his eponymous brand in Diessenhofen, Switzerland. He relocated to Schwenningen in south Germany near the idyllic Black Forest in 1902, and by 1924, the Hanhart brand had gained a reputation for making highly precise yet affordable stopwatches. At the time, the chronograph complication was only available with a staggering price tag. Hanhart, seeing the popularity of competitive sports, wanted to democratize these timing devices, and he achieved great success as a result. In 1935, the company, helmed by Johann’s son, Wilhelm Julius Hanhart, added to its achievements the creation of a split seconds stopwatch. In 1938, Hanhart launched its first modern chronograph powered by the legendary caliber 40. This was a monopusher movement which was utilized to create watches for the German Luftwaffe and Navy. By 1939, officers in both these branches would wear chronographs typified by a thin fluted rotating bezel, and a large matte black dial with luminous cathedral hands and large luminous markers. Interestingly, from the beginning, these watches were made in both stainless steel and chrome-coated brass.

1941 saw the introduction of the brand’s first two- button flyback chronograph movement, the caliber 41, a column wheel powered engineering masterpiece. Following the war, Hanhart produced Type 20 watches for the French military under the name Vixa. In 1956, Hanhart resumed production of its legendary pilot’s watches, now with the updated caliber 42. These watches are quickly distinguished from the World War II era timepieces by having modern pencil shaped hands. By 1958, Hanhart had ceased production of pilot’s watches, and during the two-year period in which it manufactured the 417 flieger or pilot’s chronograph, it is believed that only 1,000 watches were made — 500 with the designation “ES” for stainless steel and 500 more with no additional designation, which were brass watches that were chrome plated. There was a further minuscule number of these watches made with white dials for medical professionals. As an aside, our bronze watch was inspired by the brass cased watches where the plating had worn away to reveal the rich warm-colored base material.

The 417 was one of the most handsome and pragmatically designed military chronographs ever created. These watches eventually became sought after by anyone interested in performance sports, thanks to their reliable movements, high visibility due to the 39mm case size and clean dial design, and their shockproof and anti-magnetic status which is proudly proclaimed on the lower half of the dial.