One of the hard truths about watch collecting is that for just about all enthusiasts, we can’t buy – or keep – every watch we would like to have. Happily, we’re fortunate that ours is a social hobby. And if you are around long enough, get out a bit and treat other enthusiasts with respect, you will have the chance to handle – and in my case – photograph objects of horological desire that are beyond your means.

The Future of ‘Fusion’ 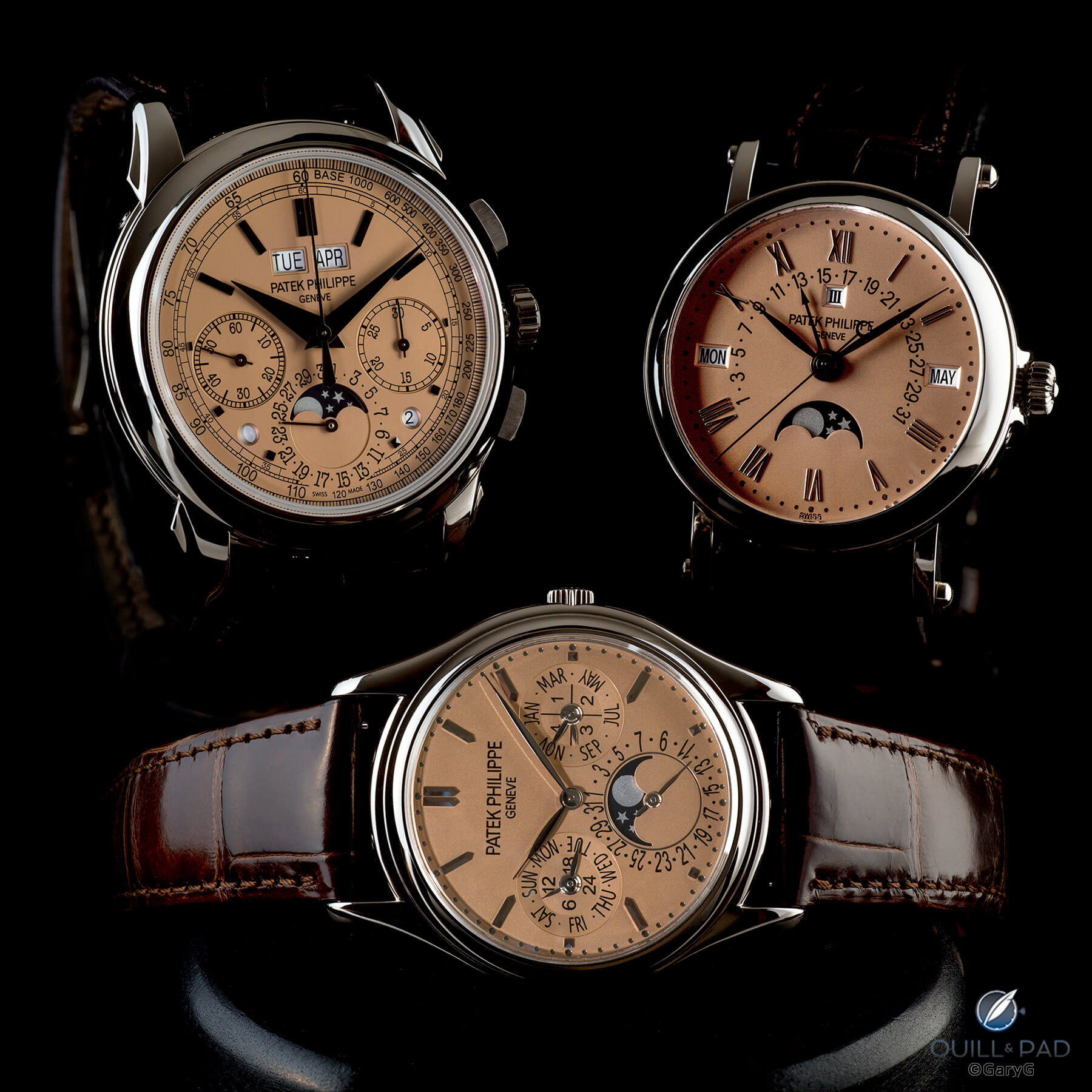 So it was that I recently enjoyed the opportunity to check out three of my friends’ rare Patek Philippe pieces, all with salmon dials: Reference 5059G-018 and Reference 3940G-029 perpetual calendars from Patek Philippe’s Vintage Collection and a unique Reference 5270G commissioned by a particularly fortunate pal.

In chronological order of introduction, Reference 3940 comes first among this trio so I’ll start there. Reference 3940 was launched in 1985 and formally discontinued in 2006, but it wasn’t until 2015, around the time of Patek Philippe’s Grand Exhibition in London, that a small number of new old stock cases and movements were used to create the salmon-dialed Reference 3940G-029. 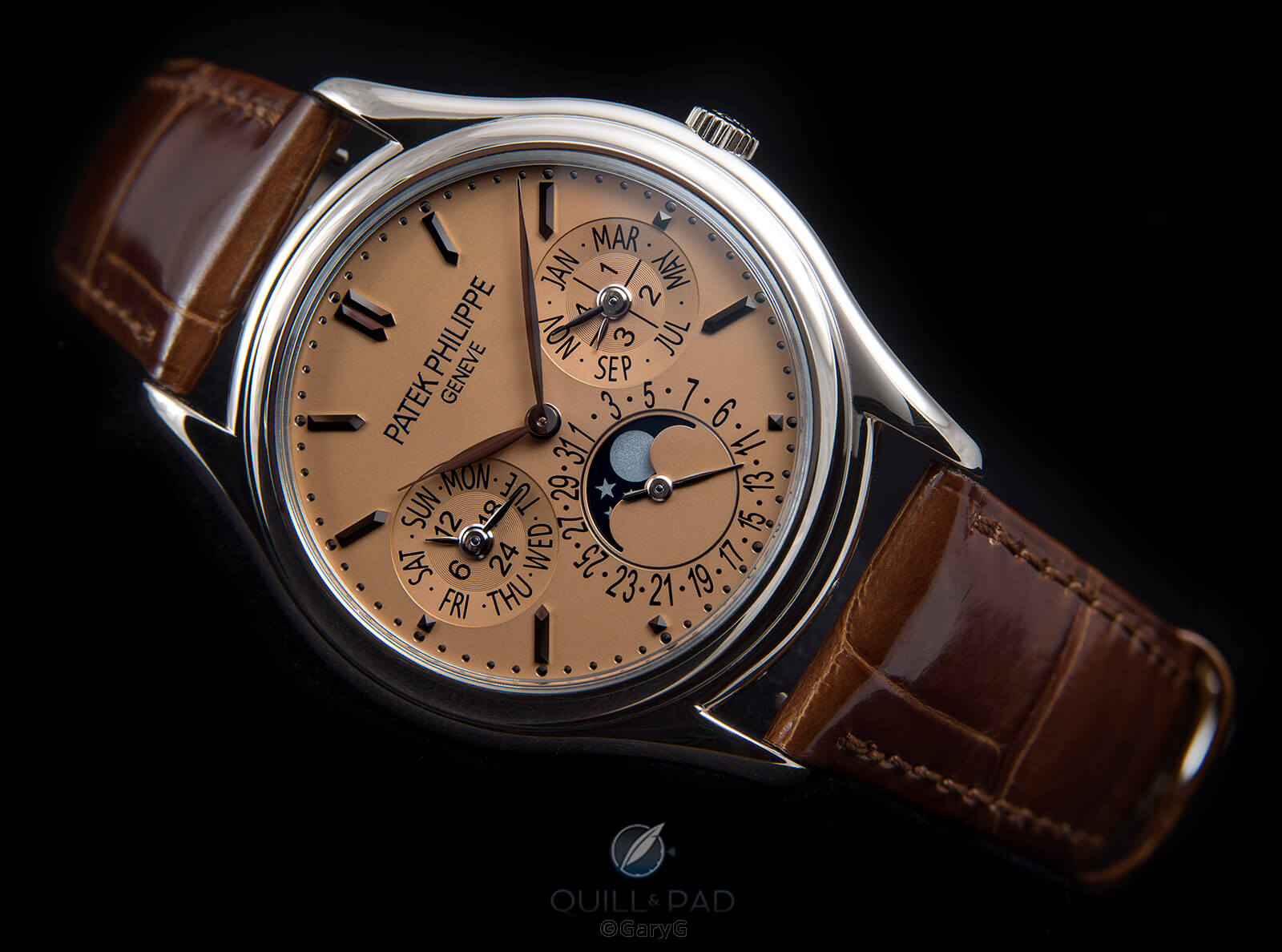 I’ve written before here about Patek Philippe’s Vintage Collection, in particular on the topic of my own blue-dialed platinum Reference 3940. Long story short, while these small-run series of watches based on discontinued references and featuring dial colors (and often designs) not seen during the original production period are often called “London” or “Saatchi Gallery” pieces, some of the London-period Vintage Collection timepieces remained in production afterward and other Vintage Collection variants (including my 3940P-027) did not appear at the Grand Exhibition in London. 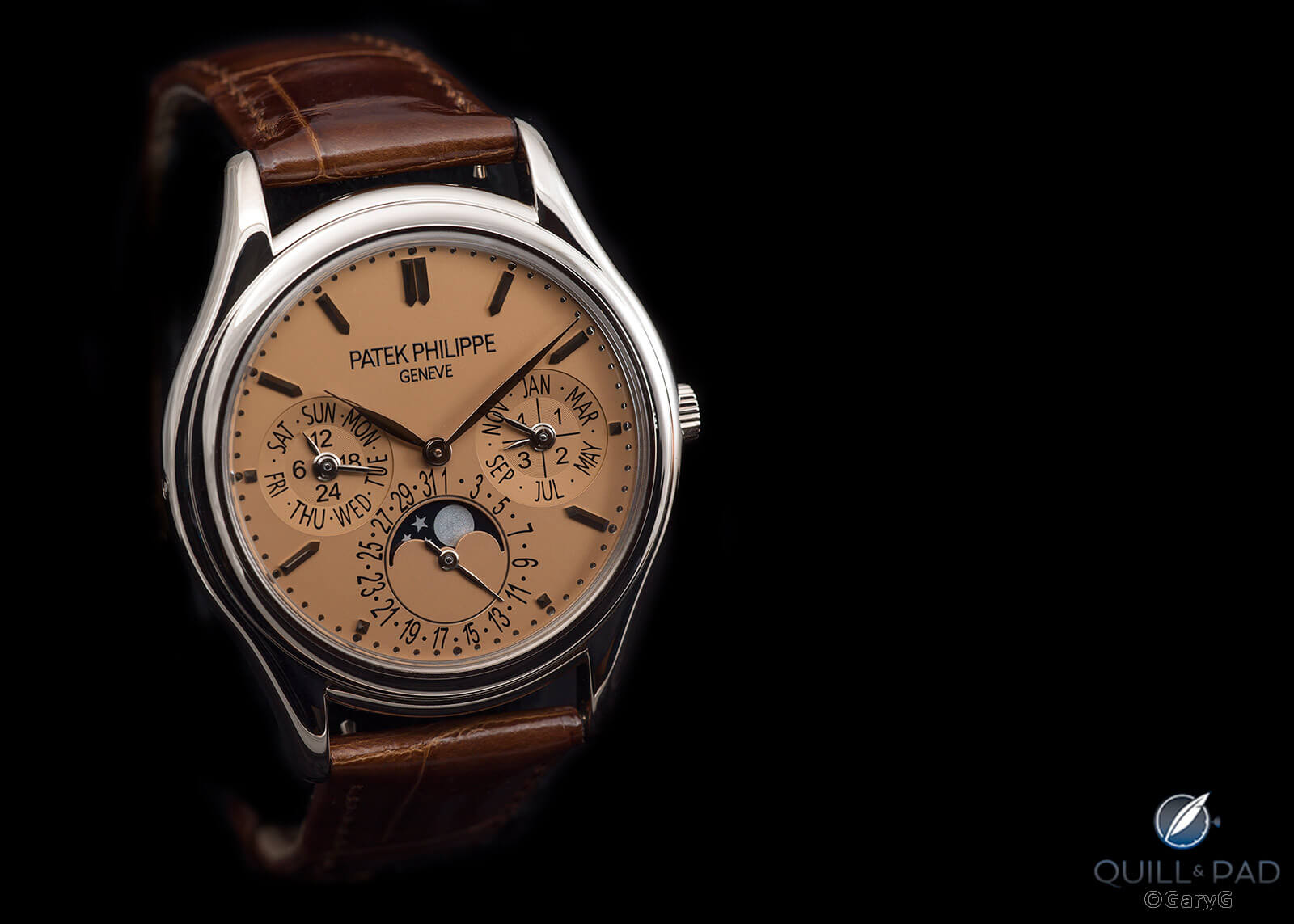 Reference 3940G-029 did appear in the London catalogue, and despite the often-seen claim that only five examples were produced, newly made pieces remained available on a highly selective basis to important Patek Philippe clients for several years thereafter. In my opinion, that’s a good thing as the combination of white gold case, coppery-colored dial, and fonts taken from the later Reference 5140 make for a winning combination. I won’t say that I like it better than my even rarer 3940P, but I won’t say that I don’t either. 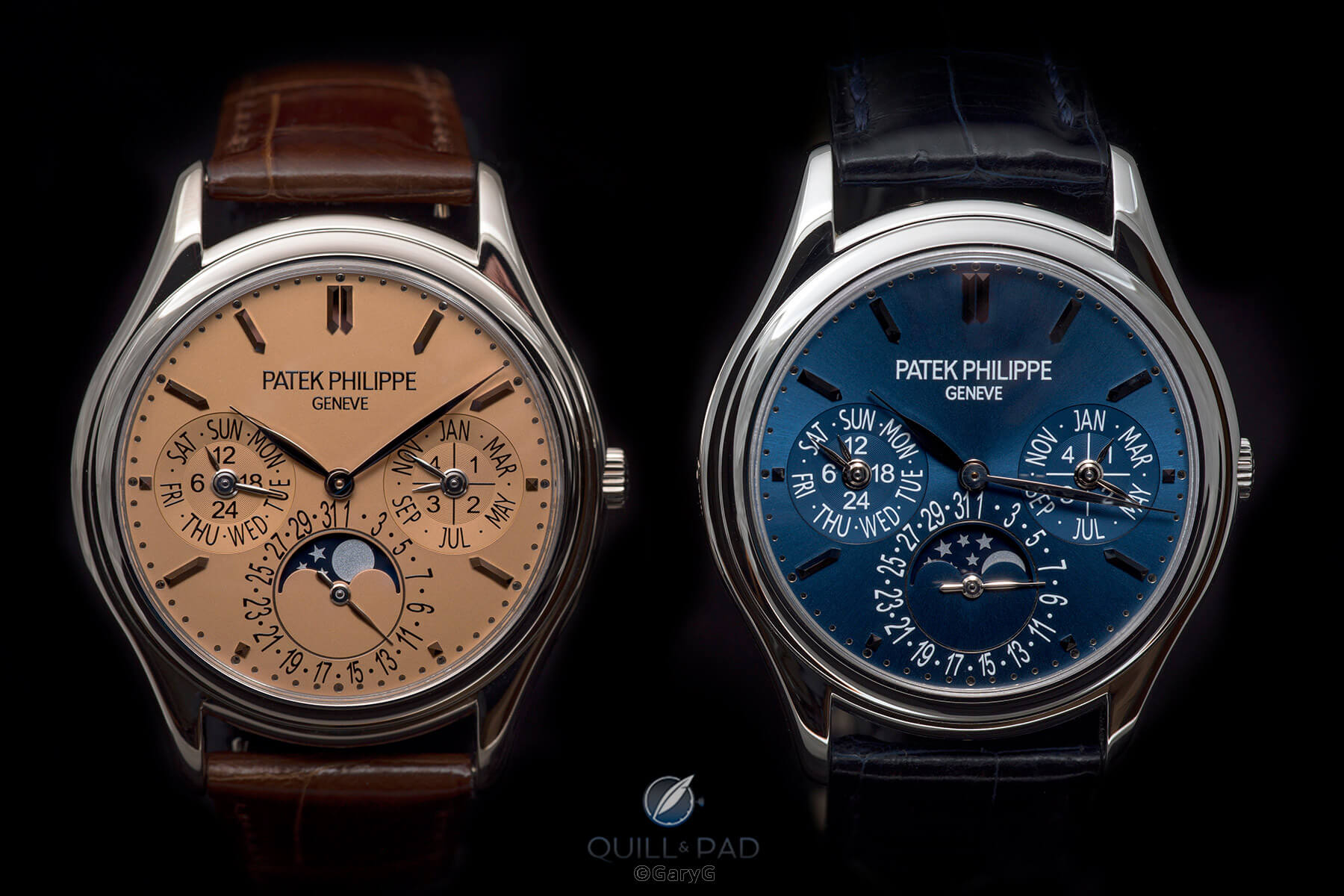 As with the regular production versions, the Vintage 3940G-027 is delivered with both solid and see-through case backs, and the owner of this one has not too surprisingly opted for the sapphire crystal back that gives a clear view of the period-correct, Geneva Seal-stamped Caliber 240 Q movement. 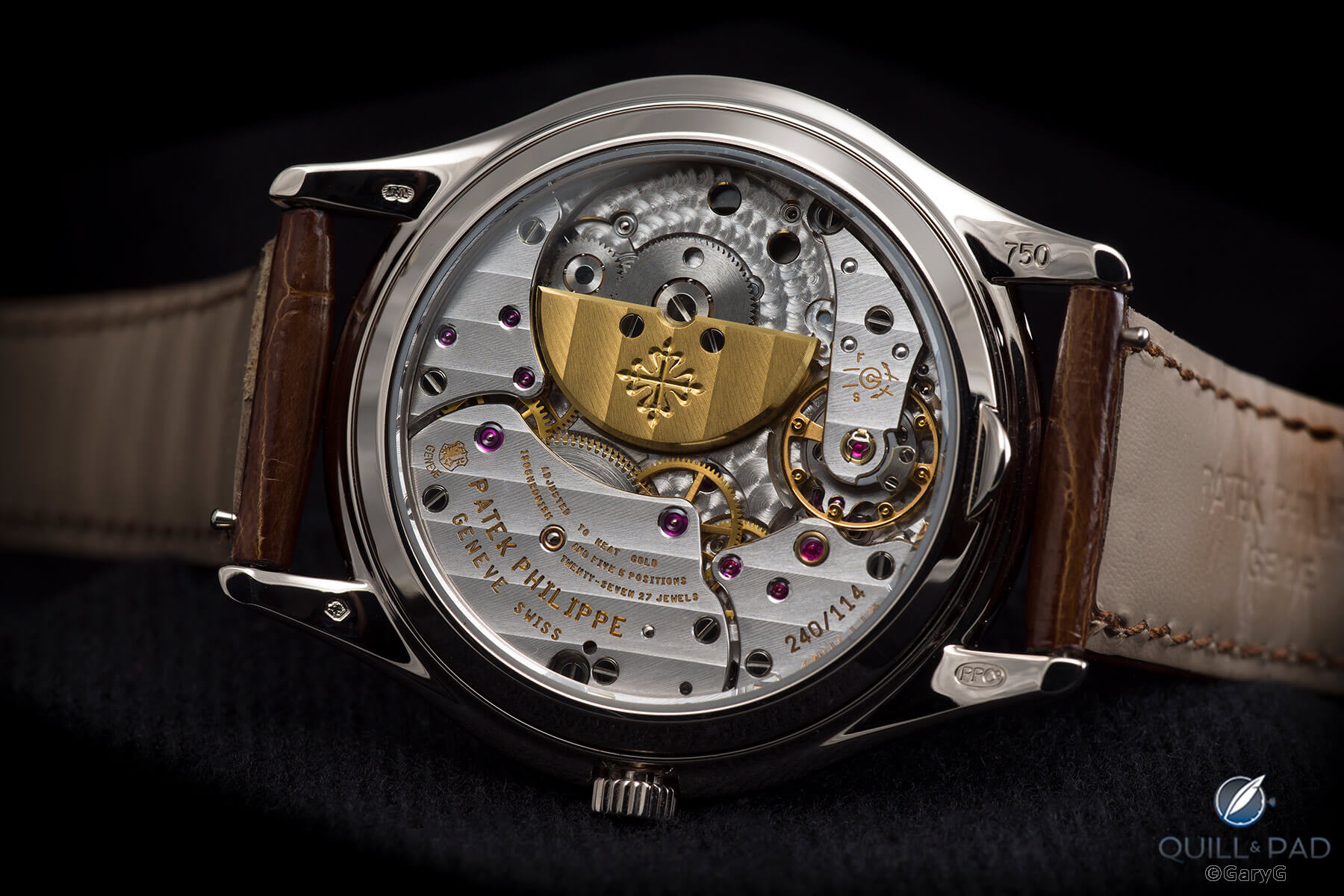 Reference 3940 isn’t huge at 36 mm, but due to its thin profile and long lugs it wears beautifully, especially with a dress shirt – and the salmon dial gives an extra pop that kept this piece on my wrist for a few minutes longer than absolutely needed to grab a quick wrist shot under the trees. 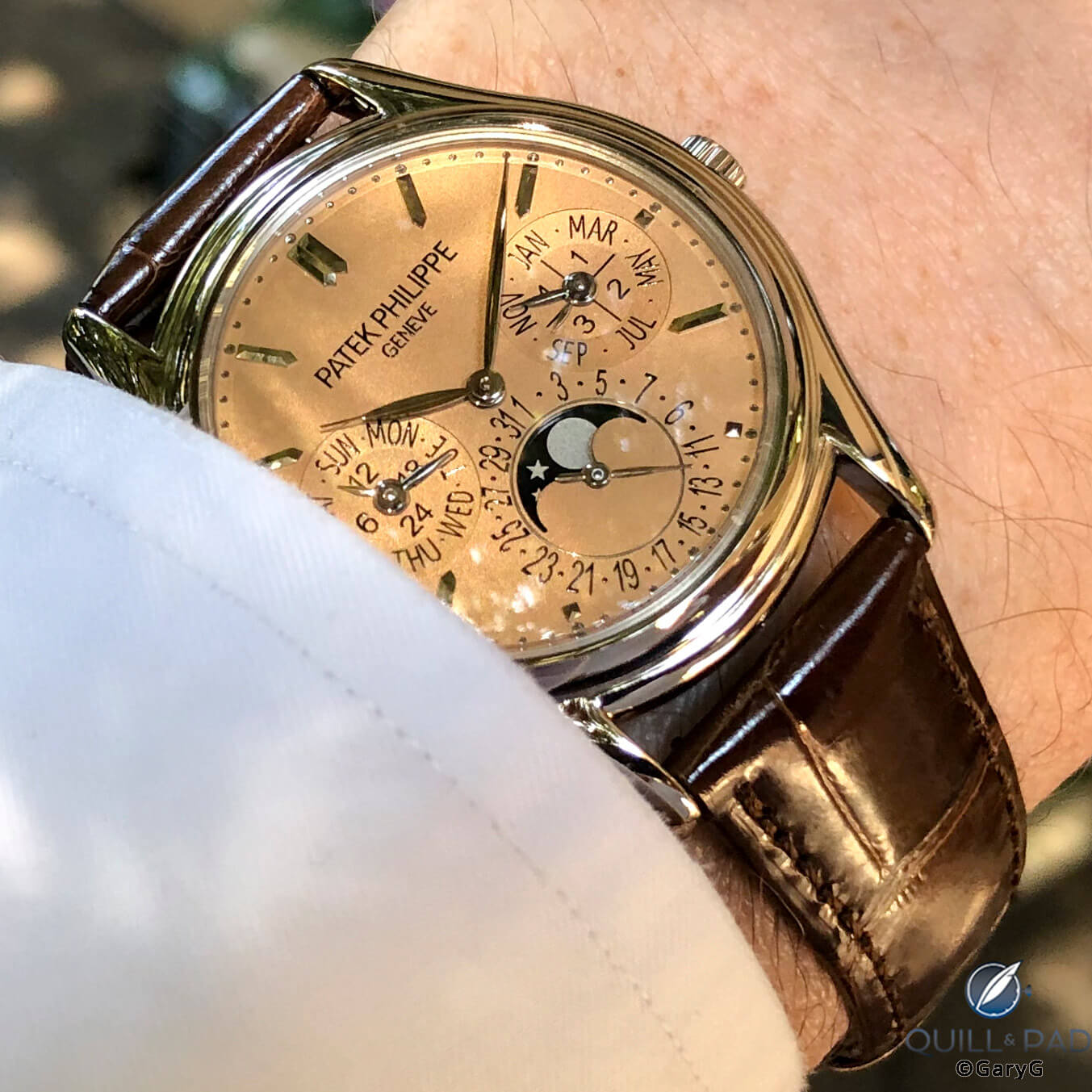 When I returned in earnest to the world of watch enthusiasm following a brief hiatus around the turn of the millennium, one of the pieces that obsessed me was Patek Philippe’s Reference 5059 with its retrograde perpetual calendar, officer’s case, and extravagant combination of large Roman and smaller Arabic numerals on the stark white dial.

When I finally had a chance to try one on, though, it was all a bit too much in a small package for me by the time I factored in the thickness of the watch, its relatively modest 36 mm diameter, and all of the action on the dial. 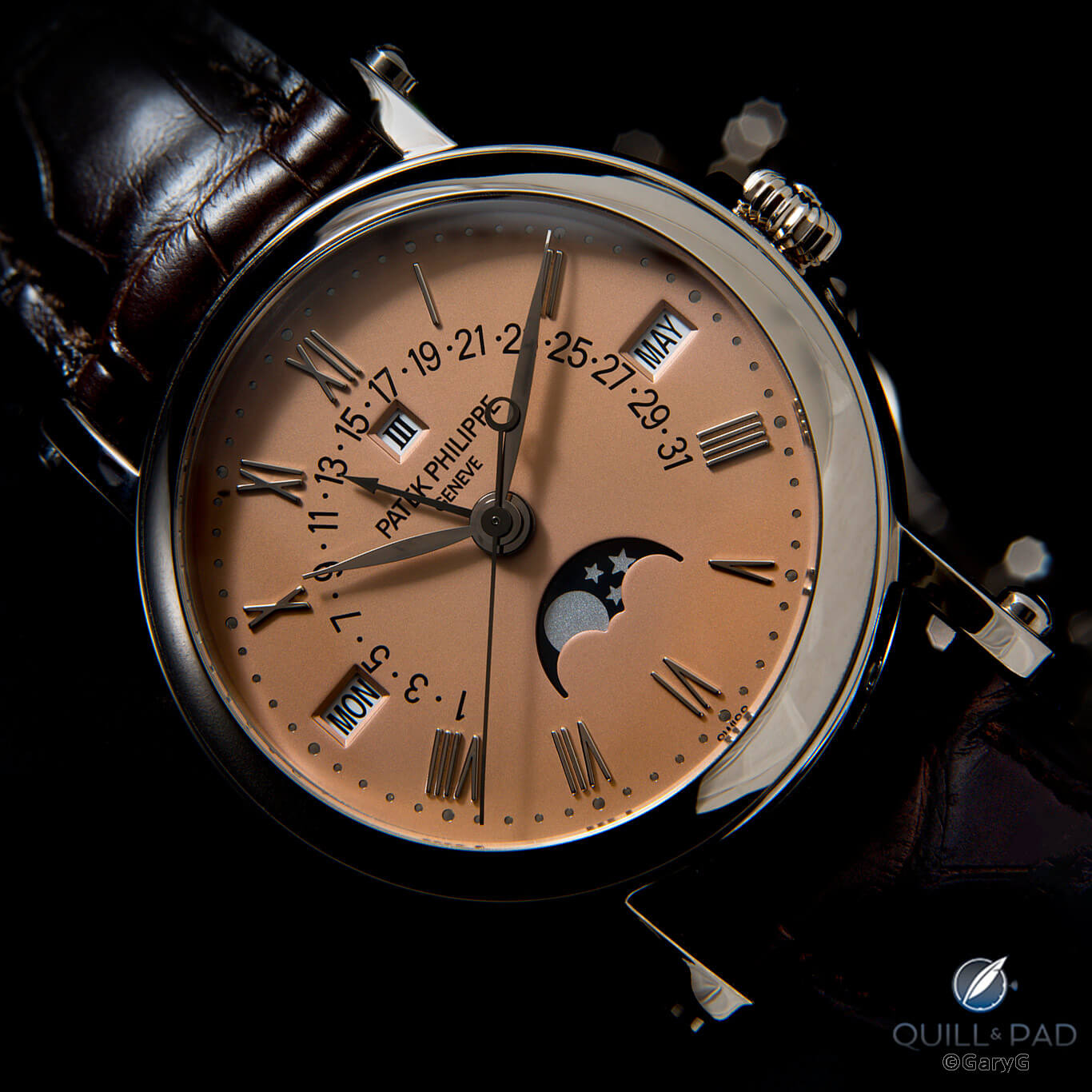 Had I seen the version shown here with its considerably simpler Reference 5050-style dial adorned with pencil-thin applied Romans that draw the eye outward, I might have felt quite differently. 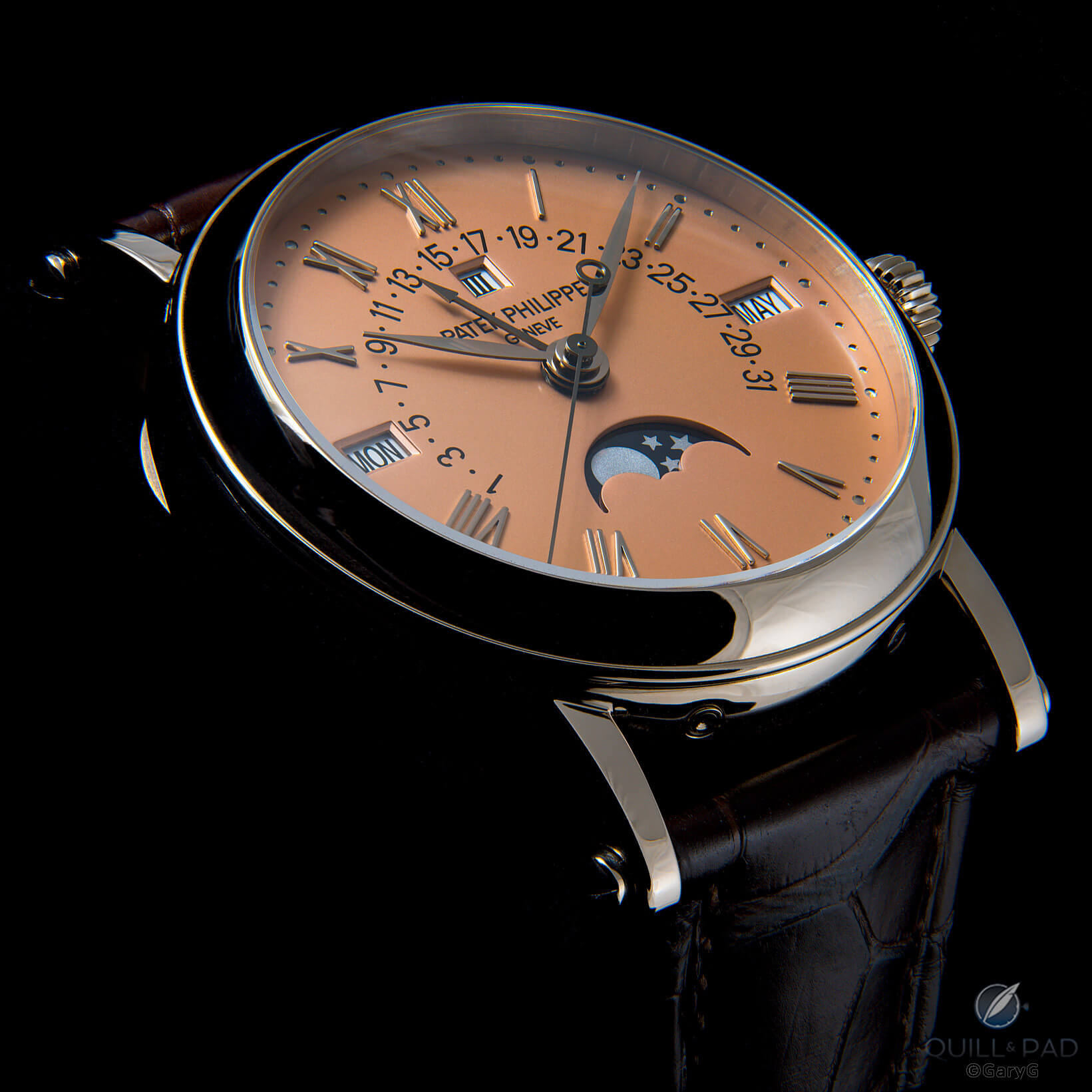 This reference was also included in the 2015 London Grand Exhibition along with other highly limited versions in yellow gold, pink gold, and platinum. I believe that there are considerably fewer of these out there than of the salmon-dialed 3940, but as with the 3940G-029 this watch was placed by Patek Philippe with a friend several years following the London event. 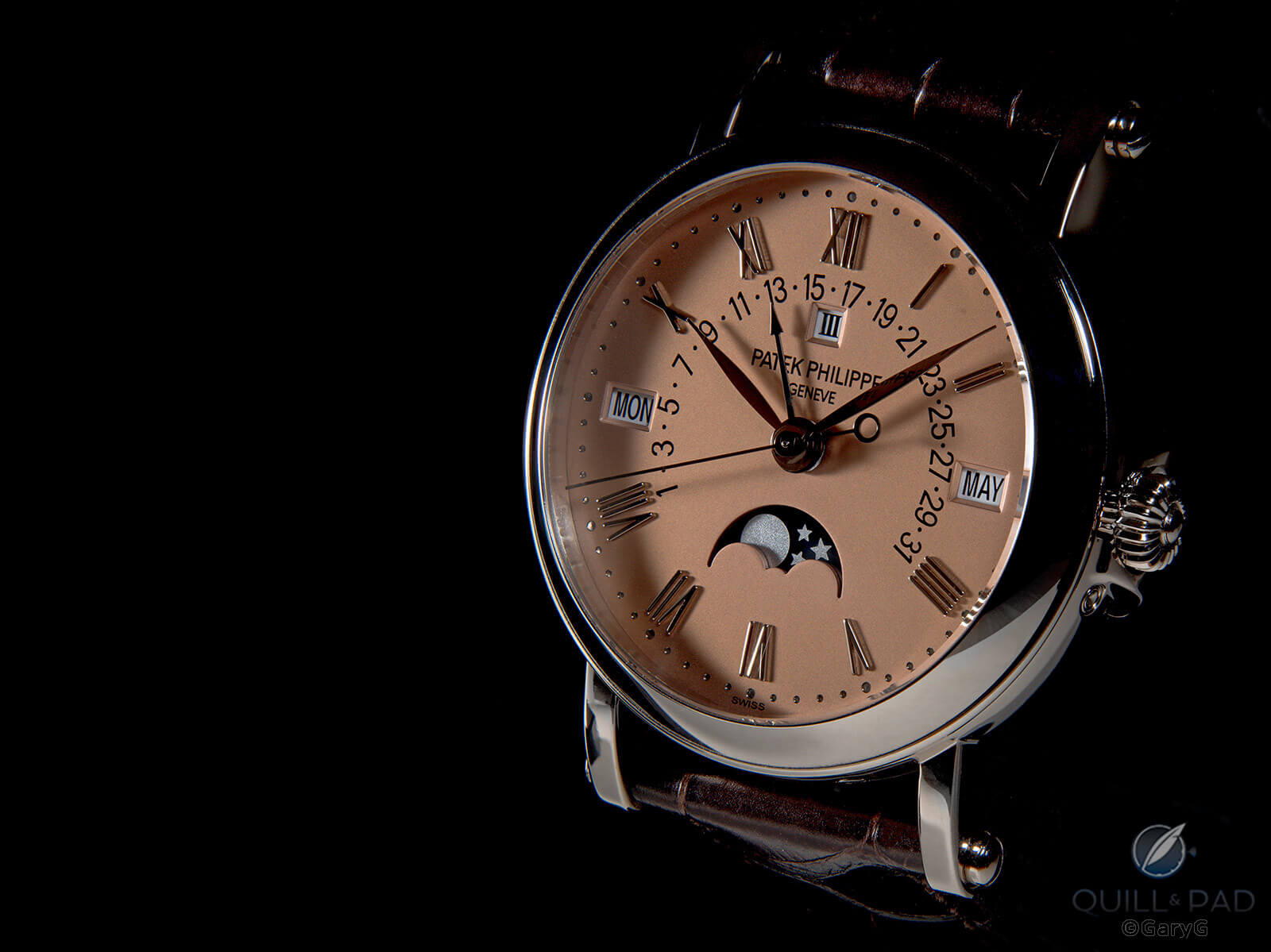 As I handled and photographed these watches, I particularly enjoyed comparing the “salmon” hues of the various dials as they are not identical. In particular, the 5059 dial tends much more to the pink side of things than the more copper-toned 3940 as seen below. 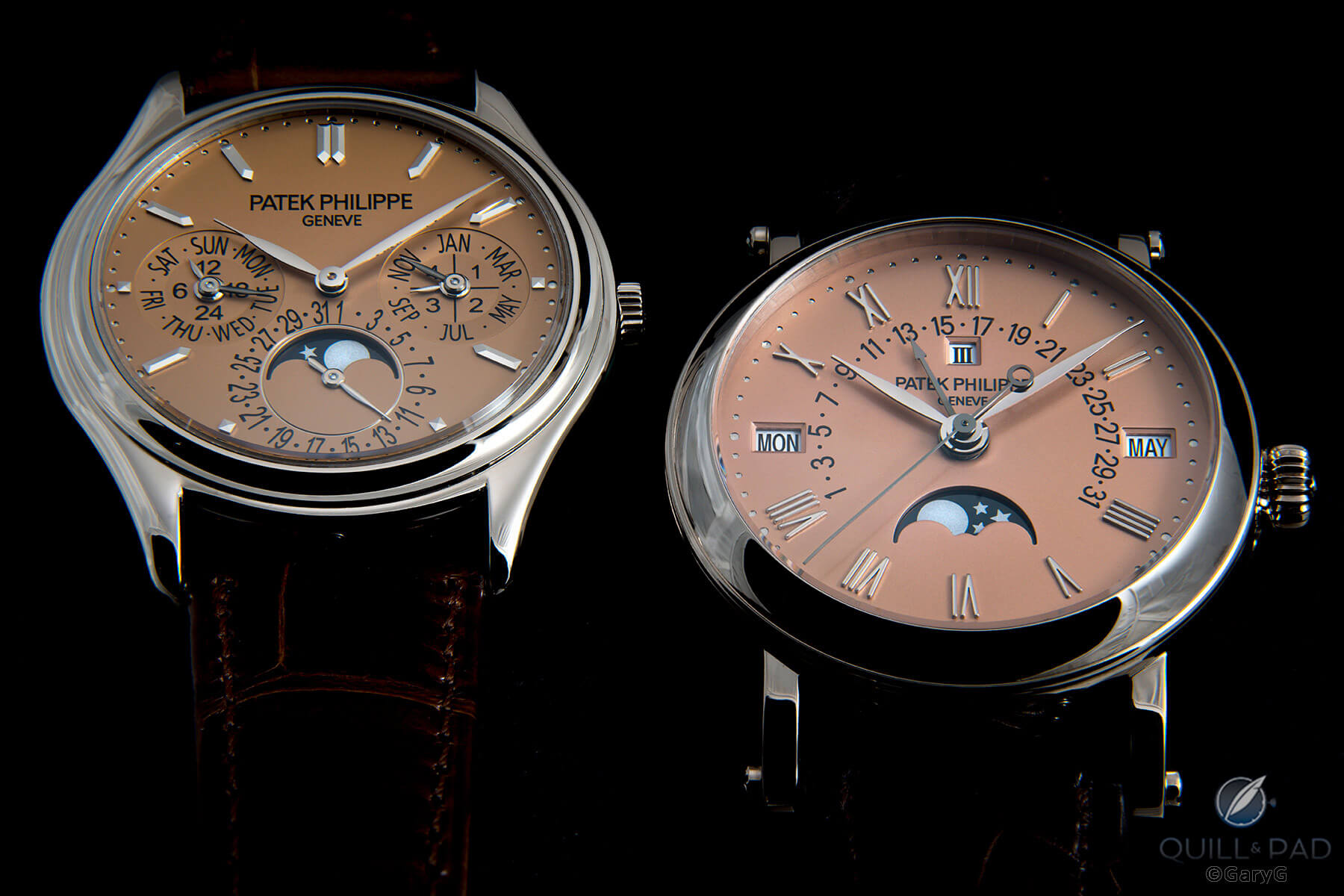 Comparing the 5059 and 3940 side by side, it also becomes apparent that when it came to constructing the Vintage Collection, Patek Philippe felt quite comfortable applying different design rules depending on the reference in question. For instance, while the 3940G salmon dial uses the codes of the later Reference 5140, the 5059’s dial is a throwback to the Reference 5050 that preceded it. And whereas in the 3940 we see a period-correct Caliber 240 Geneva Seal movement, the 5059 shown here is powered by a later Patek Philippe Seal Caliber 324 S QR movement rather than the Caliber 315 S QR that powered the original Reference 5059. 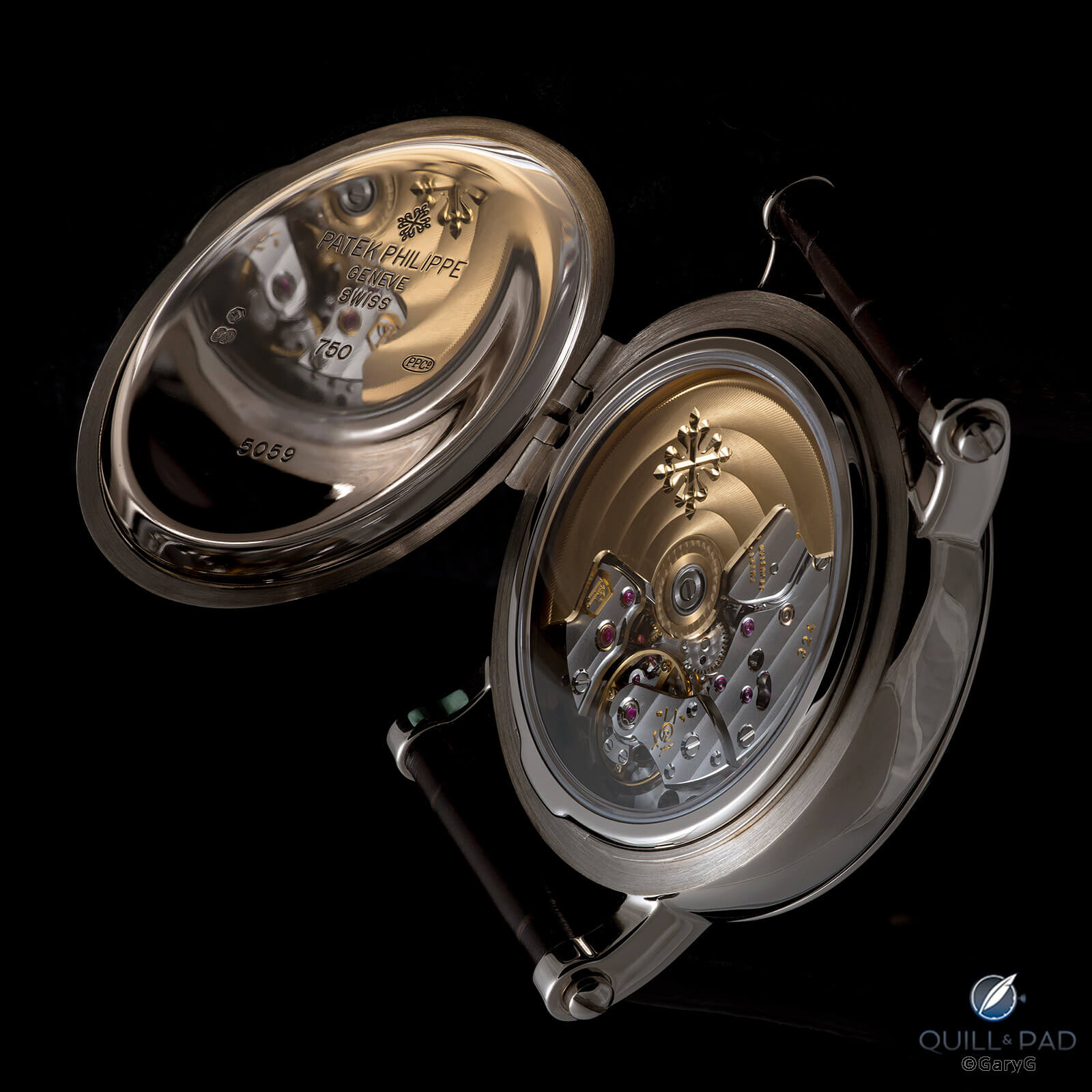 I did have good fun photographing the back of the 5059; officer case backs always present a few challenges with light management, and I do like using the interiors of polished case backs to give an additional perspective on the movement. And I particularly enjoyed the way that the dramatic concentric striping on Caliber 324’s rotor caught the light, seen both directly and in the reflection. 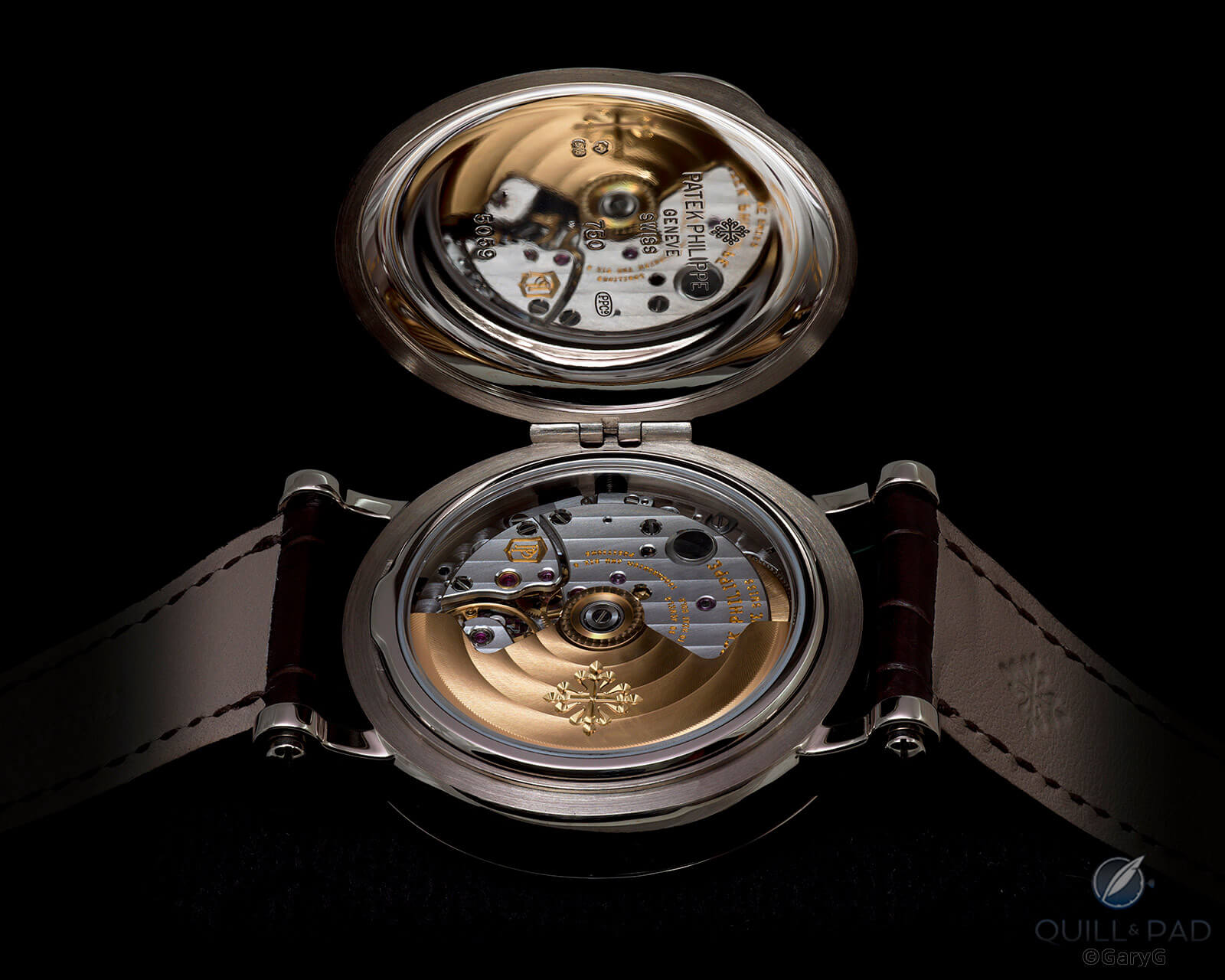 On the wrist, as I mentioned above, I found the 5050-style dial a real asset to the appearance of this particular 5059; and in dappled light under the trees the applied numerals threw off enough reflections to add just enough interest for my tastes to the otherwise flat dial. If you follow Patek Philippe, you’re likely aware of the fact that the firm executes a variety of unique pieces, including both Rare Handcrafts timepieces showcasing enameling, marquetry, engraving, and other artistic crafts and individual commissions (mostly customizations of existing references) for figures including legendary guitarist and collector Eric Clapton. 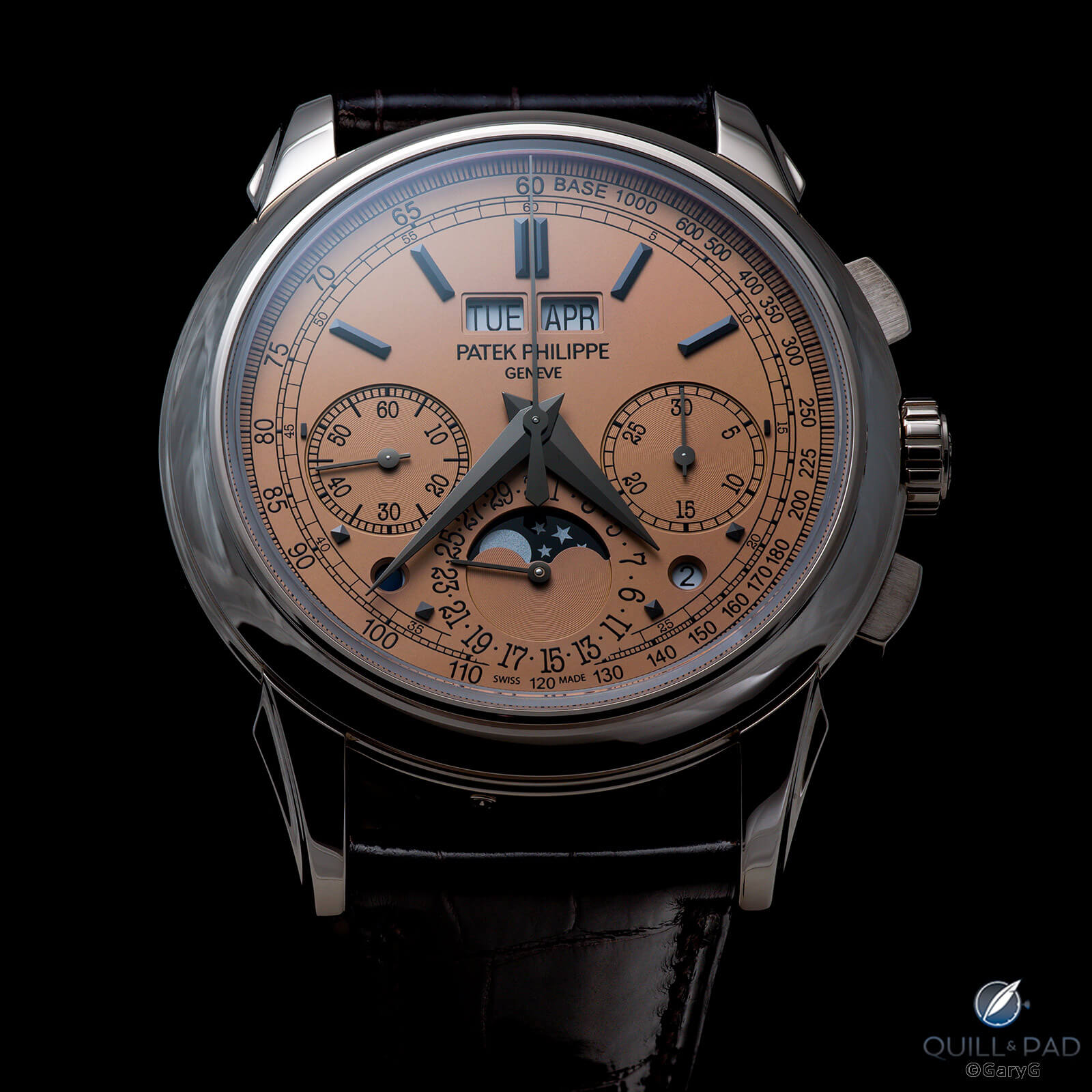 Invitations to subscribe for a unique piece are issued by Patek Philippe’s senior management to select long-time clients, and proposed designs are approved – or rejected – by Patek Philippe president Thierry Stern personally, which is another way of saying that if you have any chance of receiving an invite you already know who you are.

It’s my great good luck to know a few members of this select, and generally secretive, group; and even better that one of them was kind enough to allow me to show his unique Reference 5270G here. Don’t ask me to find you another: unique Patek Philippe Reference 5270G

Having the opportunity to propose some features of one’s own unique Patek Philippe watch, especially one as complicated as a perpetual chronograph, is a daunting task, and I can easily imagine being paralyzed by both the breadth of possible choices and the gripping fear of somehow getting it wrong. At the same time, since you will likely only have one opportunity to play the game and the watch only needs to please you, I’d guess you’d also feel bad getting something too close to a production version. After considering a variety of potential options, my friend illustrated his respect for Patek Philippe tradition by choosing a design clearly inspired by the classic later-series Reference 2499 with baton markers and Dauphine-style hour and minute hands. To go outside the box a bit and to suit his own wearing preferences, he chose an anthracite color for the hands and markers and also decided to retain the stick hands used on the subdials of the production Reference 5270.

We can see that he opted for a salmon-colored backdrop as seen on several limited and unique Patek Philippe watches of the past; all of this prior to Patek Philippe’s own launch of its Reference 5270P with the same color palette but different indices and hands. I’ve done my best to capture the watch in the light tent in a way that shows the play of light on the angles of the hands and batons as it’s easy to capture views that make them look more imposing than they are as seen in real life and at actual size. I find the overall look solid without being ponderous and loyal to classic Patek Philippe design features without being timid. 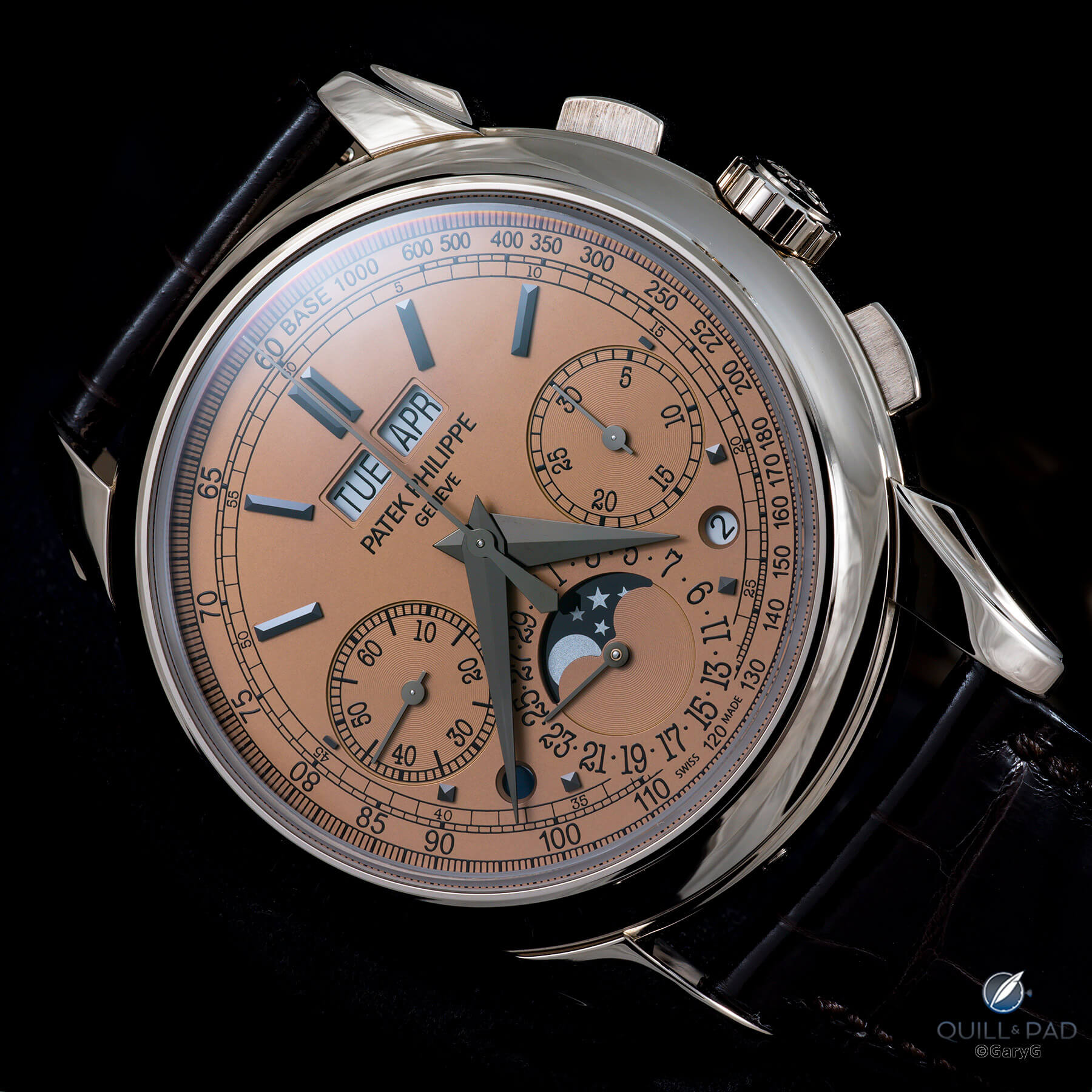 Let there be light: using flash scatter on the crystal to illuminate hands and markers, unique Patek Philippe Ref. 5270G

On the movement side, we’re greeted by the expected lovely view of Caliber CH 29-535 PS Q. Maybe I’m imagining things, but this one looks just that tiny bit crisper than the 29-535 in my Reference 5170P, and whether that’s so or not it’s a pleasure to inspect and photograph. 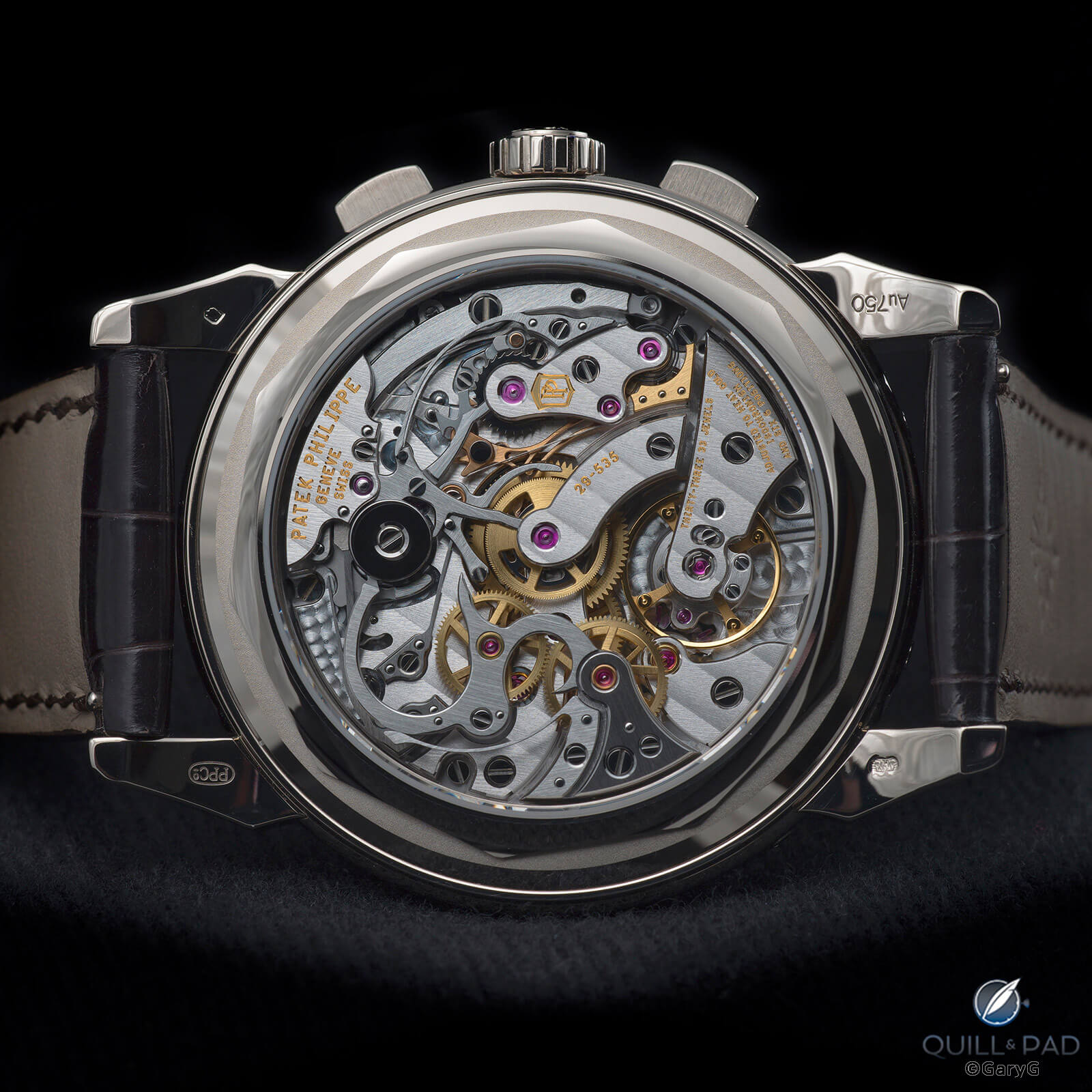 On the wrist and seen in diffuse natural light this unique watch comes into its own, combining touches of sobriety with eye-catching dial color and the just-right, at least to me, level of pleasing dial clutter incorporated in the latest iterations of the 5270 front-side design. If you are a fan of pink and salmon dials, these are undoubtedly happy times for you as a great many brands, from Patek Philippe to Breitling and A. Lange & Söhne to Grönefeld, are now offering them as prominent options. And if ultra-rare or unique watch editions are your thing, my guess is that you’ve enjoyed this close-up look at three pieces I consider myself lucky to have handled and (ever so briefly) worn.

If you’re a member of neither of those groups, I’ll finish with an image that has nothing to do with salmon-colored dials and everything to do with classic Swiss watchmaking: the three movements of these watches captured in a single stacked image. As with the first photo in this article, capturing this one was not at all easy – but as I’m unlikely to have these three references in one place ever again, well worth the effort. I’ll be looking for your thoughts on your own unusual watches and the current fashion for salmon dials in the comments. In the meantime, happy wearing!

*This article was first published on July 17, 2021 at Big Fish: Behind The Lens With Unique And Rare Salmon-Dialed Patek Philippe Perpetual Calendars.

Why I Bought it: Patek Philippe Reference 3940P-027 Vintage Collection

Serving Up Salmon: Watches With Sublime Salmon-Colored Dials And Why They Remain Rare

The Future of ‘Fusion’

In Conversation with Matthias Breschan, CEO of Longines

You Are There: Breitling Launches The Limited Navitimer B02 Chronograph 41 Cosmonaute And Collectors Strut Their Stuff