Sometimes, you miss the memo.

This was not how I had hoped to start the New Year at Quill & Pad. I was planning a story about a favorite cigar, a much loved one that is a bit of a legend. I pull one out every now and again, as do friends, and they never fail to thrill. So it came as a bit of a shock when I started researching details for this article I checked the www.habanos.com site for information, not only on the brand, Bolivar, but also the cigar, their wonderful Gigantes cigars.

No problem with the brand, but when it came to the cigar there was no sign of it. But this was the official site, and I knew that various retailers here and there had them for sale, or claimed to do so. I could not imagine that they had been discontinued. Say it ain’t so!

So, it was off to the ever-reliable and informative www.cubancigarwebsite.com. 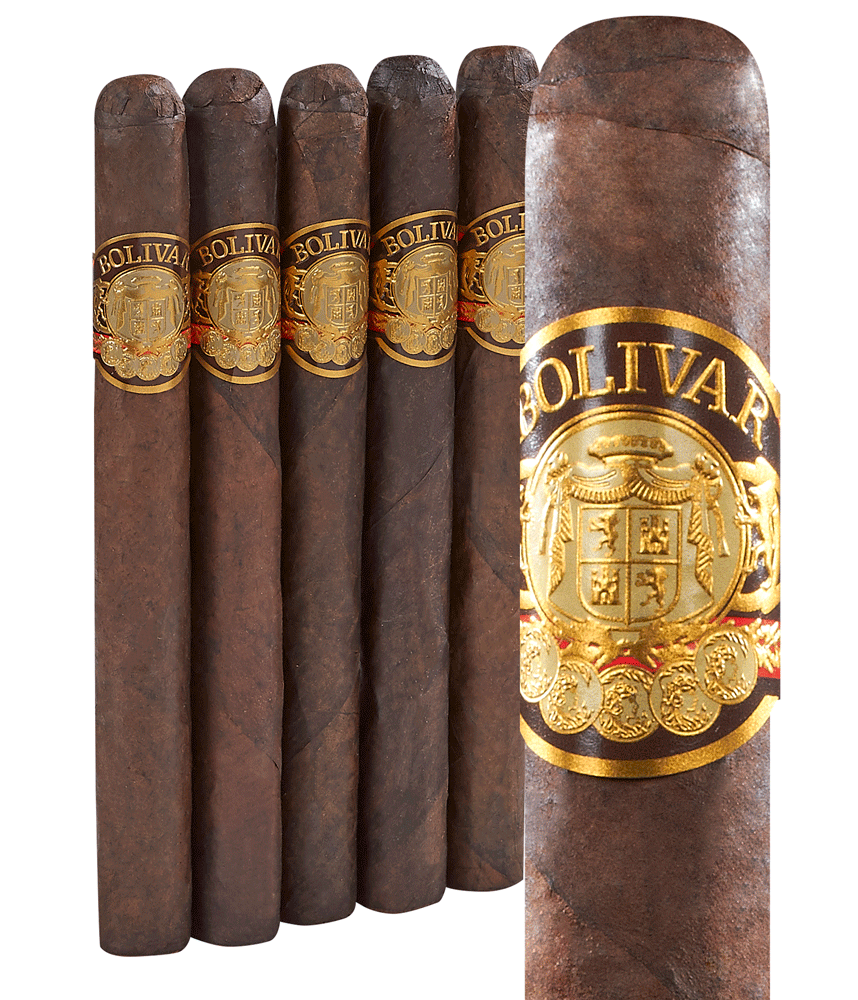 Seems that the Bolivar Gigantes cigars were, in fact, discontinued in 2017 (perhaps I can claim some mitigation in that my cigar bible, ‘An Illustrated Encyclopedia of Post-Revolutionary Havana Cigars’ by Min Ron Nee, was published before the final discontinuation and that I had been blissfully enjoying my remaining stocks without realizing that impending doom had already been set in motion). At that stage, 2017, they had been available in dress boxes of 25. The slide lid boxes of 50 were discontinued in 2010, while boxes of 25 in individual aluminum tubes ceased production as far back as the late 1980s. Now, that would make them largely a curiosity, except that a great many cigar lovers still have boxes in their humidors – they age exceptionally well – and, as mentioned, boxes still pop up occasionally at retail.

More importantly, they are regulars at Bond Roberts, the world’s leading cigar auction site (www.bondroberts.com), appearing almost fifty times in the last few years, including several times as slide boxes of fifty cigars. These boxes vary in age but some date back more than 25 years, confirming just how well they age. Best of all, while not cheap (trust me, quality Cuban cigars are unlikely to ever be considered cheap again, as recent price rises are trying to re-position them as elite luxury products, priced accordingly), there are still excellent value. 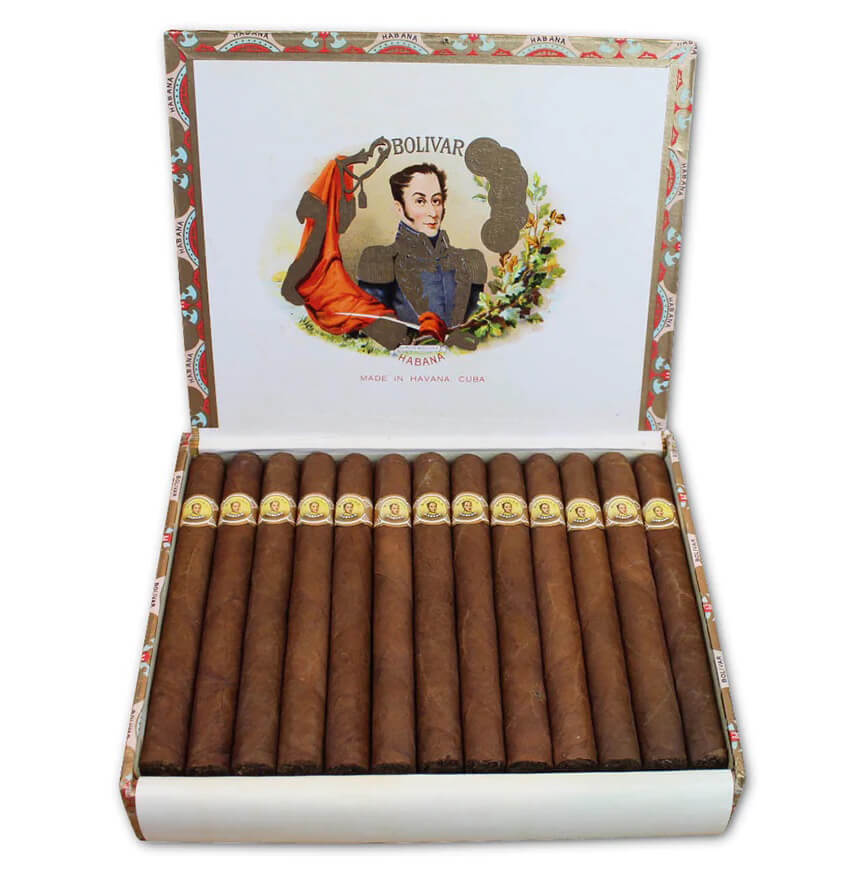 Of course, this raises, yet again, the utterly bewildering practice employed by Habanos as to discontinuations. The Gigantes are immensely popular cigars, or were, but they too, have been tossed on the scrapheap of past glories. In its place? Well, it seems that at least nine out of ten new cigars these days are what we might call fat boys – cigars that are usually rather short in length but often with massive ring gauges. Why people prefer these to the glorious cigars that made Havana’s reputation is beyond me, but it is what it is. The public has apparently spoken, and once famous cigars find themselves thrown out like old newspapers.

Before we look at the Gigantes, perhaps exploring the brand, Bolivar, might be in order. There is a ‘Bolivar’ brand from the Dominican Republic, but they are nothing to do with the Cuban Bolivar brand. There are numerous cigars produced under the Bolivar brand, other than the Gigantes, and they are more than worth a look.

No one is quite certain when the brand first came into existence, but it is believed around 1900 (1902 is generally accepted, though not definitive), founded by Jose Fernandez Rocha. For many years, the registration was under Rocha’s name.

And in case you were wondering, the Bolivar brand is indeed named after the legendary Simon Bolivar, the man considered to have liberated a great deal of South America from the Spanish in the 19th century. Born in Venezuela in 1783, Simón José Antonio de la Santísima Trinidad Bolívar y Palacios, to give him his full moniker, was the first President of Bolivia (something else named after him). That may just have been the most stable period in that country’s history, given that they have apparently enjoyed nearly 200 coups and countercoups since then. As well as Bolivia, he is the man who brought independence to Venezuela, Columbia, Panama, Ecuador and Peru. All of this before his death at the relatively youthful age of 47. Not a bad legacy and surely one more than deserving of being commemorated by having one of the great Cuban cigar brands named after him.

After the death of Rocha, the brand was sold to the Cifuentes family in either 1944 or 1954 – records have been found for both dates, though most consider 1954 more likely. Production was then relocated to the Partagas factory. By this time, and with the support and expertise of the Partagas factory, the cigars had established themselves in export markets, especially Britain. 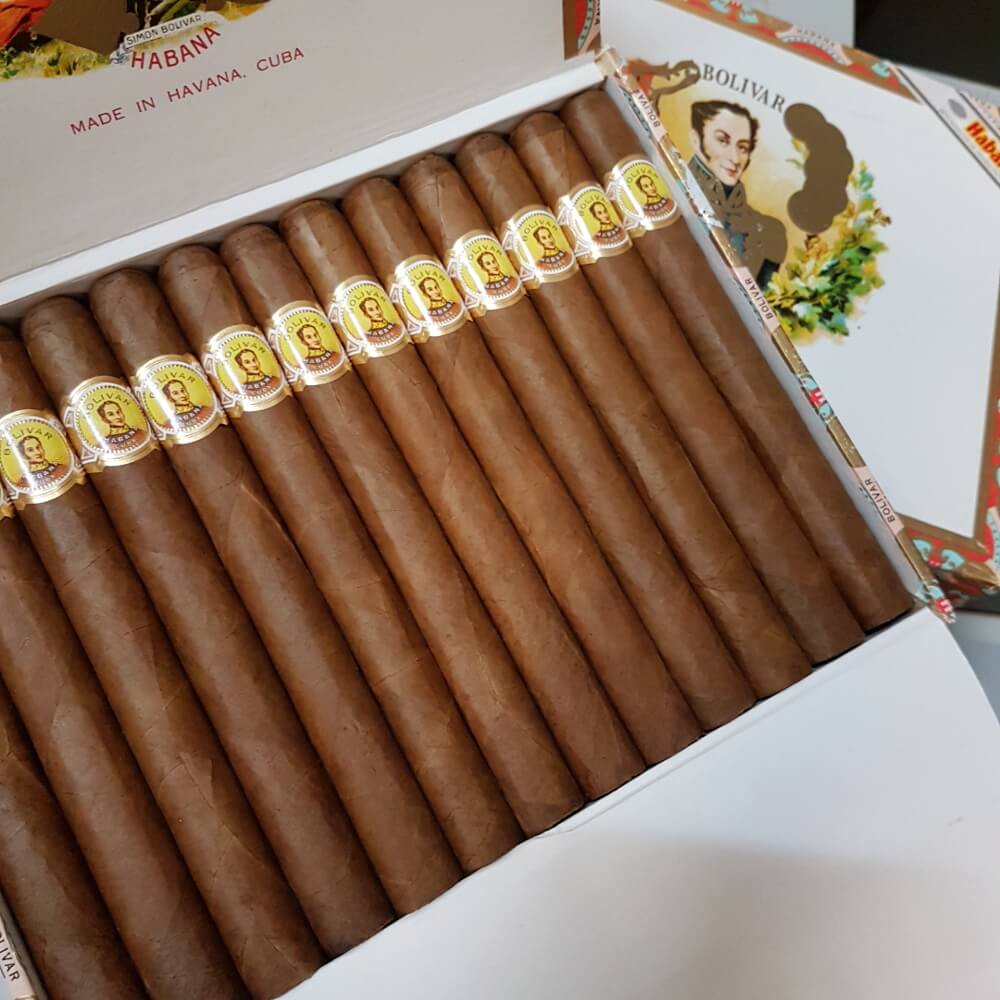 The style of Bolivar cigars is considered to be powerful, ‘robust’, old school’, ‘full-bodied’, and with the ability to age for a long time. Indeed, Min Ron Nee has described them as being ‘unparalleled’ when it comes to ageing. Perhaps the strongest of all brands, what is interesting is that they are often described as changing in style in the mid-1990s to a milder style. The older examples must really have been ‘take no prisoners’ cigars. Flavors will vary from cigar to cigar, but most are considered to be toasty, earthy, rich and full. A high percentage of ligero leaf is considered to be a key reason behind the power of the brand.

If we needed more evidence as to the quality, Min Ron Nee has said that if he were ‘condemned’ to smoke only one brand of cigar, he would “have no hesitation that Bolivar would be the choice”. No higher praise…

And so, we go to the Gigantes, or Coronas Gigantes to give them their full name (other brands have also released ‘Gigantes’, most notably Ramon Allones). First made before the Revolution, they were/are ‘Churchill’ in size, with a ring gauge of 47 and a length of 178 mm (what an ideal size for a cigar! Why can’t we have more of them?). Bolivar has also released Churchills, but these are different to the Gigantes. Min Ron Nee describes them as tangy, toasty, strong and earthy with a subtle fruity note. He acknowledges that they saw a reduction in strength in the mid-90s but gained ‘in suaveness’ as a trade-off. He describes these as a must for any humidor and notes that he could smoke them every single day, having never failed him.

Completely agree, and even though it is all much more difficult now to source them, it is worth the effort. If you ever come across any, grab them.

For me, these are wonderfully full and flavorful cigars, with toasty notes, coffee beans, a hint of orange rind, leather, spices and earthy touches. Occasionally, notes of figs and stone fruit with an underlying creamy honey character. They will give flavor from the first puff to the last, and as we have seen, putting them away for a long spell in your cellar will only be to their benefit. The Gigantes might be strong and powerful, but they always seem balanced. Sadly, this will be an experience that becomes rarer and rarer in the coming years.

Cohiba Robusto: The Cuban Benchmark For All Cigars

Cohiba Maduro 5: Some Of The Most Faked Cigars In The World (For Good Reason)