Gears are one of the most incredible applications of simple machines that I can think of. Simple machines are basic devices that rely on mechanical advantage to multiply force to do work. The classic examples of simple machines include the lever, wheel and axle, pulley, incline plane, wedge, and screw – each of which was discovered or invented thousands of years ago. 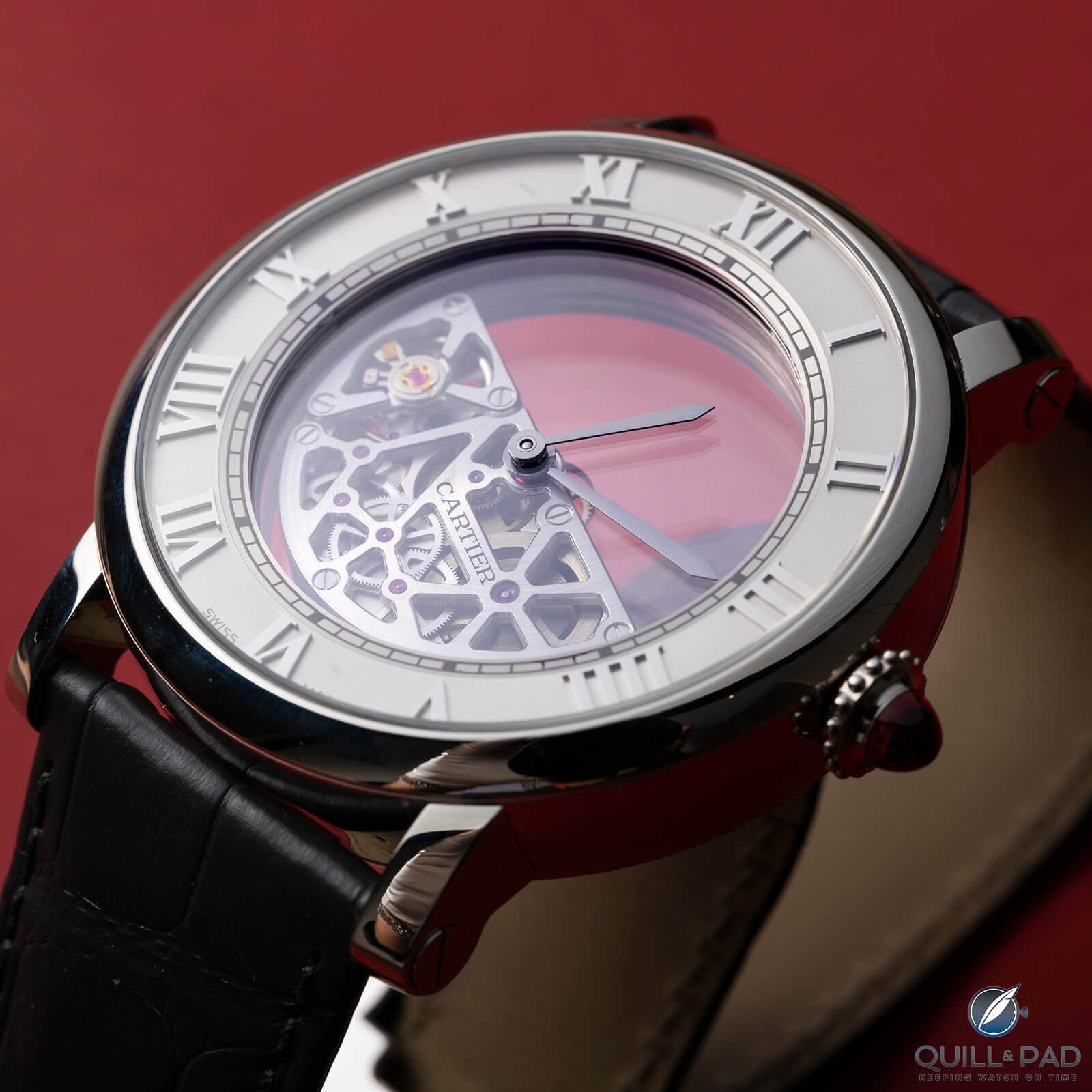 The use of a simple machine allows one to transmit force in a different direction or to multiply the amount of torque. The lever is a great example as it allows a heavy object to be moved a short distance by using a long, rigid arm that moves a large distance and pivots on a point known as a fulcrum, requiring less force at any moment but equaling the force needed to move the object over a shorter distance

The wheel and axle, another very useful simple machine, uses a pair of disks or cylinders arranged to rotate around the same axis to transfer a tangentially applied force (a force at the periphery of the disk perpendicular to the radius) and convert it into rotational motion. This is technically a variation of the lever since the axle acts as a fulcrum and the entire diameter of the wheel functions as the lever arm.

This brings us back to the gear, which uses a wheel and axle (a round variation of a lever) and gear teeth (a simple lever multiplied around the diameter) to create precise rotation in any ratio, direction, or speed desired. Two simple machines combined can make a component that, when combined with other gears, forms a compound machine, which is where the real fun begins.

A planetary gear system (e.g., a differential) is a mechanical marvel of gears working on the surprisingly simple-to-understand principles of levers and wheels. The only hitch is that those principles are stacked on top of each other and interact under certain circumstances that change with a handful of variables. That makes the differential seem a little like mechanical magic to some, a fact that watchmakers have been taking advantage of for centuries.

The latest example of this mechanical wizardry comes from the talented minds at Cartier with the release of the Masse Mystérieuse at Watches and Wonders 2022, another mystery display that appears to have no connection to the case or the winding stem. But this time the movement is in full view – or at least most of it – and that is what makes it even more fascinating.

I can’t bury the lead for a moment longer so let’s just spell it out: the movement (the gear train, balance, mainspring, plates, and bridges) is contained within the winding rotor. Or more accurately, it is the winding rotor, which appears to float in the transparent center of the watch. Wow doesn’t begin to describe the first reaction to this watch, but it’s a good place to start. 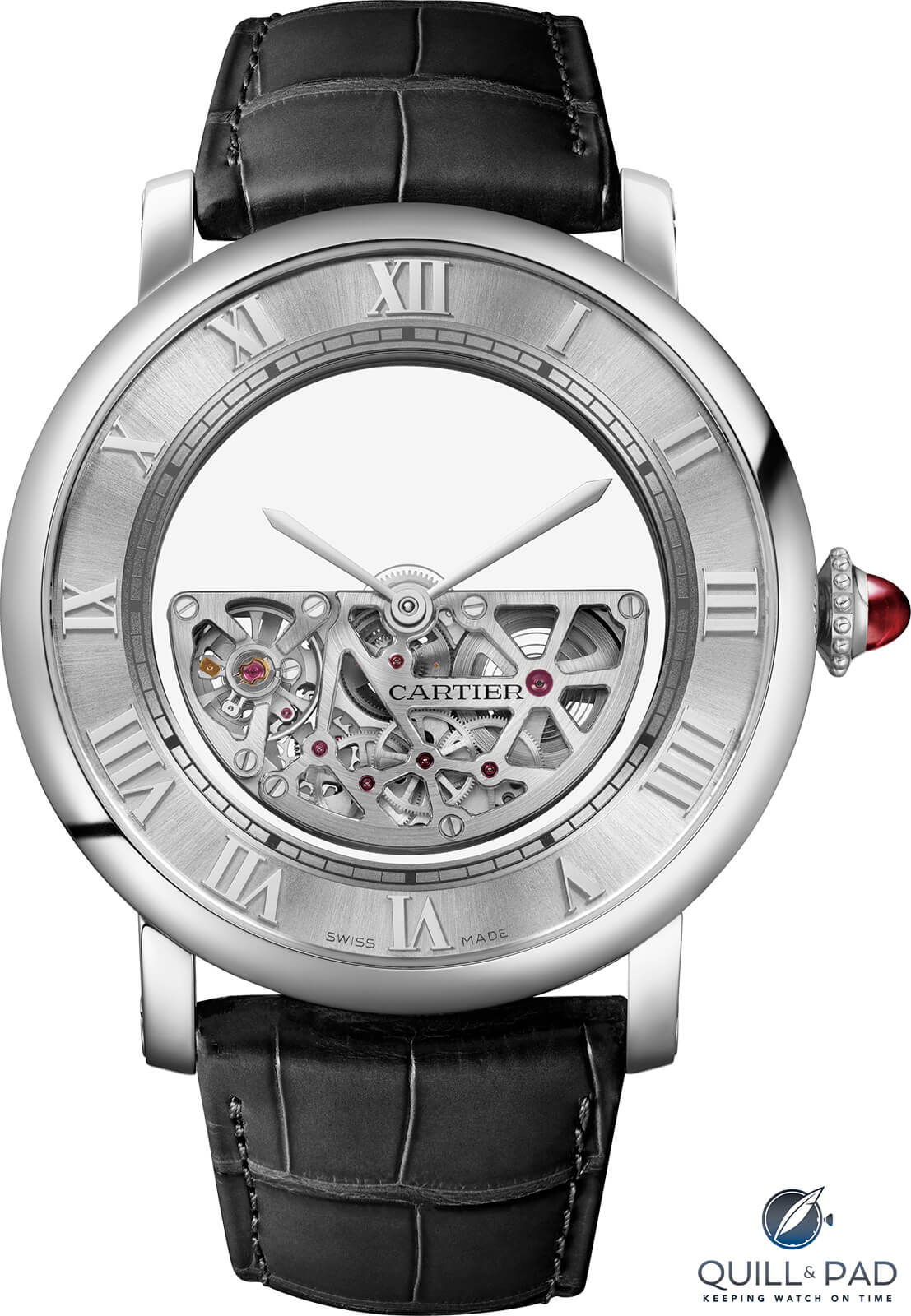 With a history of creating both mysterious clocks (beginning all the way back in 1912) and mysterious watches, Cartier’s Masse Mystérieuse is part of a long line of horologically and mechanically creative inventions that were inspired from an actual magician’s invention from the 1830s, Jean-Eugène Robert-Houdin.

But the Masse Mystérieuse is a long way from the origins of the concept even if it achieves the results in thematically similar ways. The concept has always been a popular way to showcase watchmaking prowess, and this model is the best hand played to date. The dial has a ring of classic Roman numerals and a traditional railroad minute track just inside the numerals. That is the only traditional thing about the display as the watch opens up to the large, seemingly empty center in which a single gear appears to be fixed while the hour and minute hands display the time.

Dangling from the center with no apparent connection, the entire movement, which is shaped like a winding rotor, drives the hands while it whirls around. Like every other “mysterious” clock and watch, there are hidden parts of the mechanism in that ring around under the edge, but knowing how it works doesn’t make it appear any less magical. That is the incredible nature of any Cartier Mystérieuse timepiece: they are made so well and with time-tested methods that they are basically mechanical examples of the sleight-of-hand principle of misdirection.

It also helps that it just looks good, and I mean classy good. The essence of Cartier was always as a jeweler and its timepieces always feature a cabochon in the crown, usually a sapphire or ruby. The Masse Mystérieuse uses the aforementioned ruby and goes big with a rather tall specimen, providing the main pop of color on the watch. The only other color comes from the 43 jewels in the movement, though not all of these are visible.

The rest of the watch comprises various shades of silvery white with the platinum case and rhodium-plated movement components. The monochromatic nature of the watch maintains it as both a statement piece (thanks to the movement) and something that flies under the radar. That combined with the overall restrained aesthetic of Cartier makes the Masse Mystérieuse a master of playing for both sides: mechanical marvel and classically elegant.

While I love a truly elegant watch, I’m still here for the mechanics, and this watch doesn’t leave me wanting. Caliber 9801 MC is a first in the industry while being a natural progression of the Mystérieuse concept since it builds on established methods and incorporates new ideas. Most fans may not have realized it could be possible to have an entire movement self-contained within the mass that winds itself.

It seems like a fan sitting on a boat trying to blow the sails to move forward – it’s just not how physics works.

Obviously, that is also not how the Masse Mystérieuse works, but that is the best part of the illusion. Using a sapphire crystal disk as the support structure for the centrally fixed gear, the movement can freely pivot around that point and use its own weight to slowly wind the mainspring. That takes one part of the winding mechanism outside of the movement so that it can actually function and not end up a failed experiment with perpetual motion. 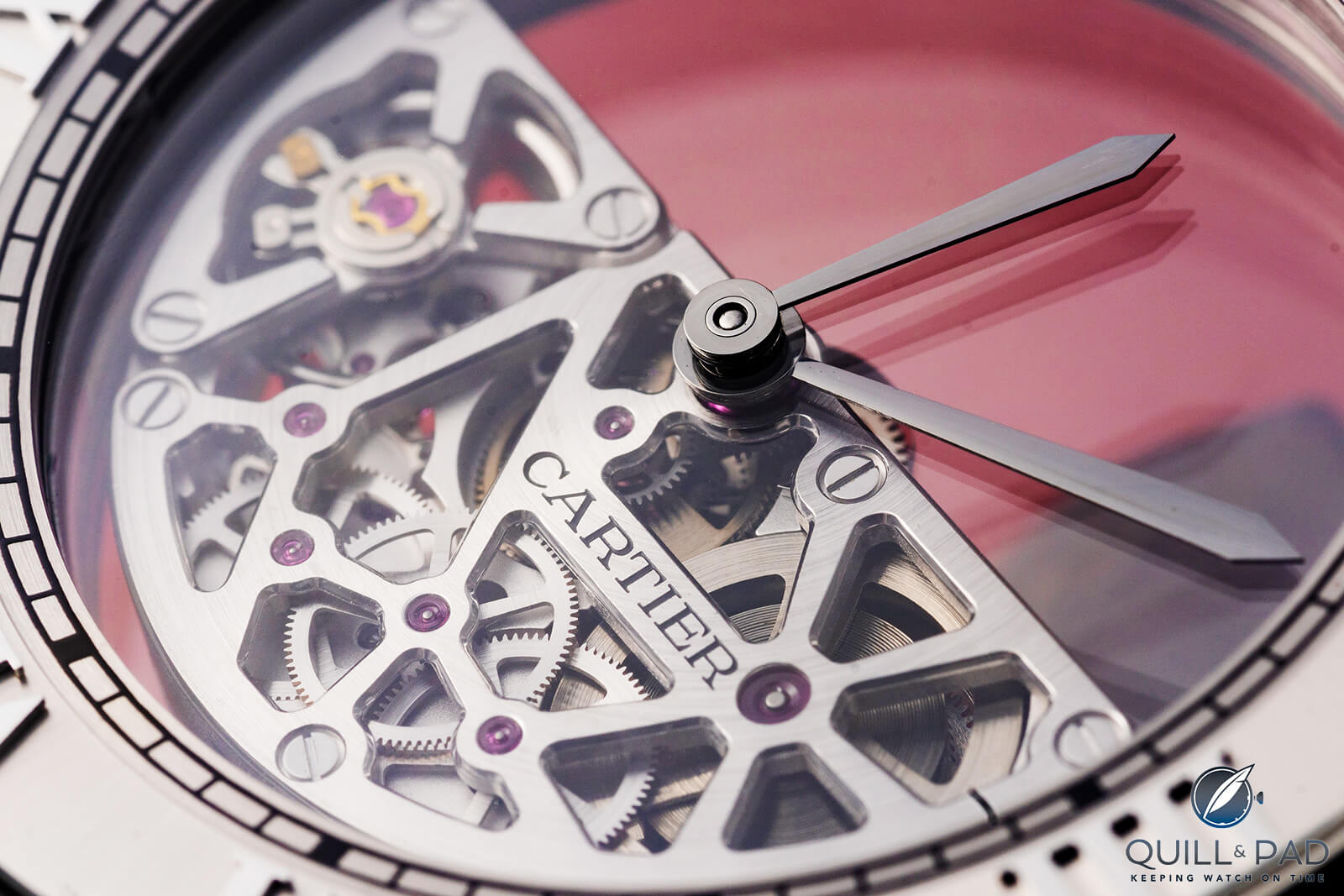 This is a very cool and super simple solution to the problem of winding the mainspring within the movement that is freely pivoting around a central point, but it does not solve the issue of setting the time via the crown on the side of the case. This is where we come back to the foundation of Mystérieuse clocks and watches: the hidden gearing around the edge of the dial and case that meshes with sapphire crystal disks to drive the hour and minute hands.

But since the entire movement isn’t hidden within the case it can’t be that simple.

The movement bears a complex differential gear system as its main connection to the hour and minute hands that is crucial to the seemingly magical function of the display. Since the movement is freely rotating around its central pivot, any normal connection to the time display would have it rotating in sync with the movement, and clearly that is not going to work in this case.

The differential allowing the gear train mounted within the movement to drive the hour and minute hands will also freely rotate around them as the movement/rotor spins. This is all thanks to the planetary gear system within a differential. As the input gears rotate within the differential, the other gears are either free to spin or are constrained, which redirects the rotation of the input to a different place. The hour and minute hands are constrained by the sapphire crystal disks used to set their position, but only firmly enough that the planetary gears in the differential will spin freely when the movement rotates around the center.

This keeps the hands from moving from their position as the movement spins but still allows them to be slowly driven through the differential to display the proper time. A full dissection of the differential with demonstrations of which gears are free, constrained, or driving and how it all connects from the balance to the crown would be required to adequately explain it, but it’s safe to say that the differential is the mechanical glue that holds this magical illusion together.

Honestly, for people who eat, sleep, and breathe mechanics like the engineers designing these movements, it’s probably not that hard to comprehend how it functions, but tracing the energy path through the movement is no small task. That is why the Masse Mystérieuse feels so counterintuitive and so darn magical. The illusion is persistent even if you know how it works, and that is why the “mysterious” watches are some of my favorite from this brand.

It also touches upon one of the reasons I fell in love with watchmaking: mechanical watches present engineering in such a way that it almost feels like magic. Thanks to the size and typically hidden nature of the movement, it isn’t obvious how watches work. But with careful examination you can comprehend it since it is all right there in front of you. 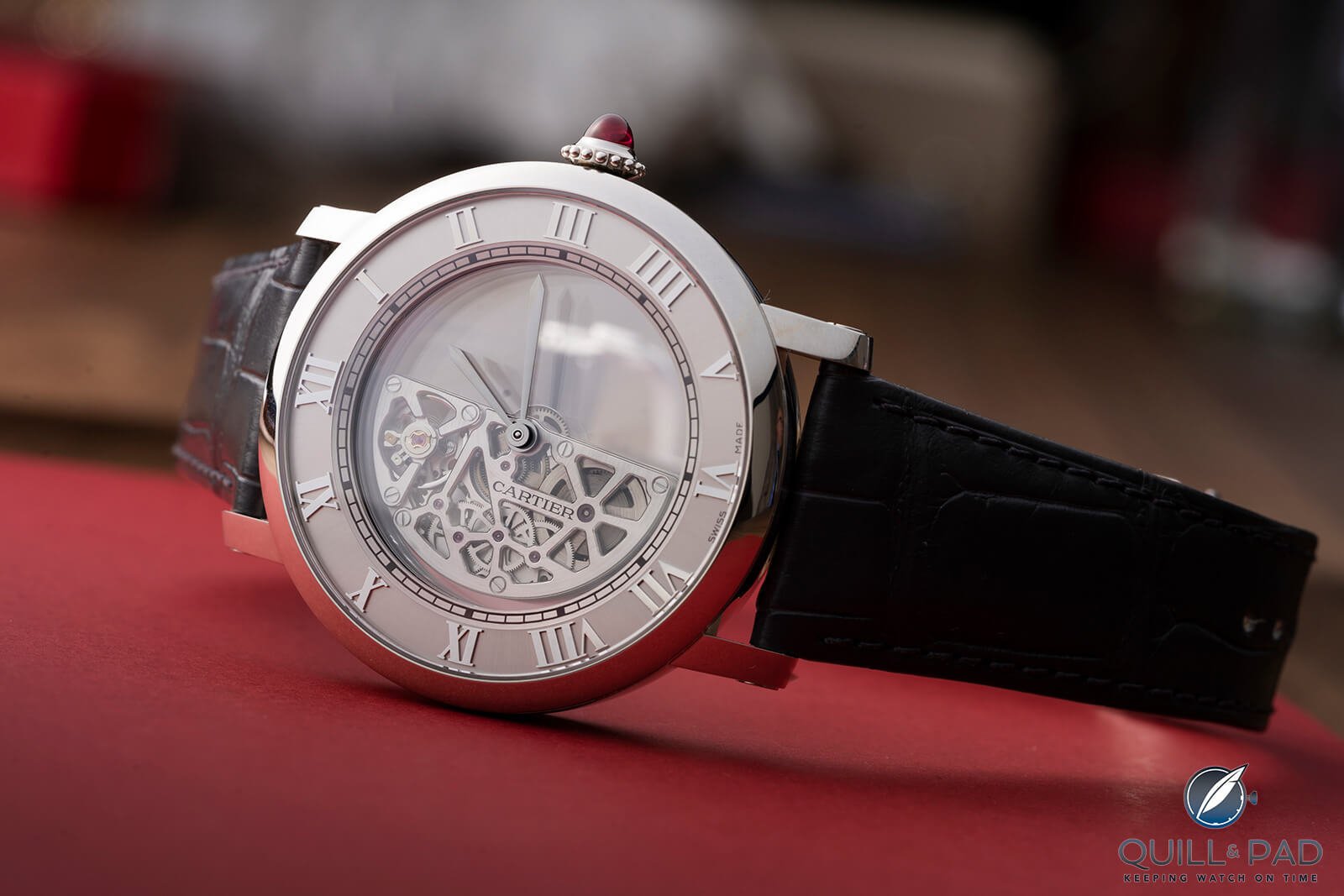 The Masse Mystérieuse from Cartier amplifies that feeling thanks to the apparent lack of any connection to the case while putting most of the mechanics on full display. It may be a time-only watch with no complications or tourbillons, but it might be one of the most impressive accomplishments (from an emotional standpoint) to date.

And that is a mountain only very few can climb.

While we wrap our heads around the Masse Mystérieuse, let’s break it down!

Cartier’s Mystery Clocks: Now You See Me, Now You Don’t

History Of Ferrari Watches: The Unlikely Story Behind The Cartier Formula Ferrari