Château Mouton Rothschild Artist Labels Are As Collectible As The Wine

Julien de Beaumarchais de Rothschild remembers a Sotheby’s wine auction in which a 1977 magnum of Château Mouton Rothschild sold for an astronomical price. Even though it was not a good vintage, the buyer badly wanted that particular year to complete his vertical collection.

When it comes to Bordeaux First Growth Mouton collectors want them all, with even poor vintages prized because they feature a tiny work of art on the wine label. “It’s a bit irrational, something that you can’t explain, which is linked more to feelings,” notes de Beaumarchais de Rothschild, sixth-generation family member and co-owner of Château Mouton Rothschild. 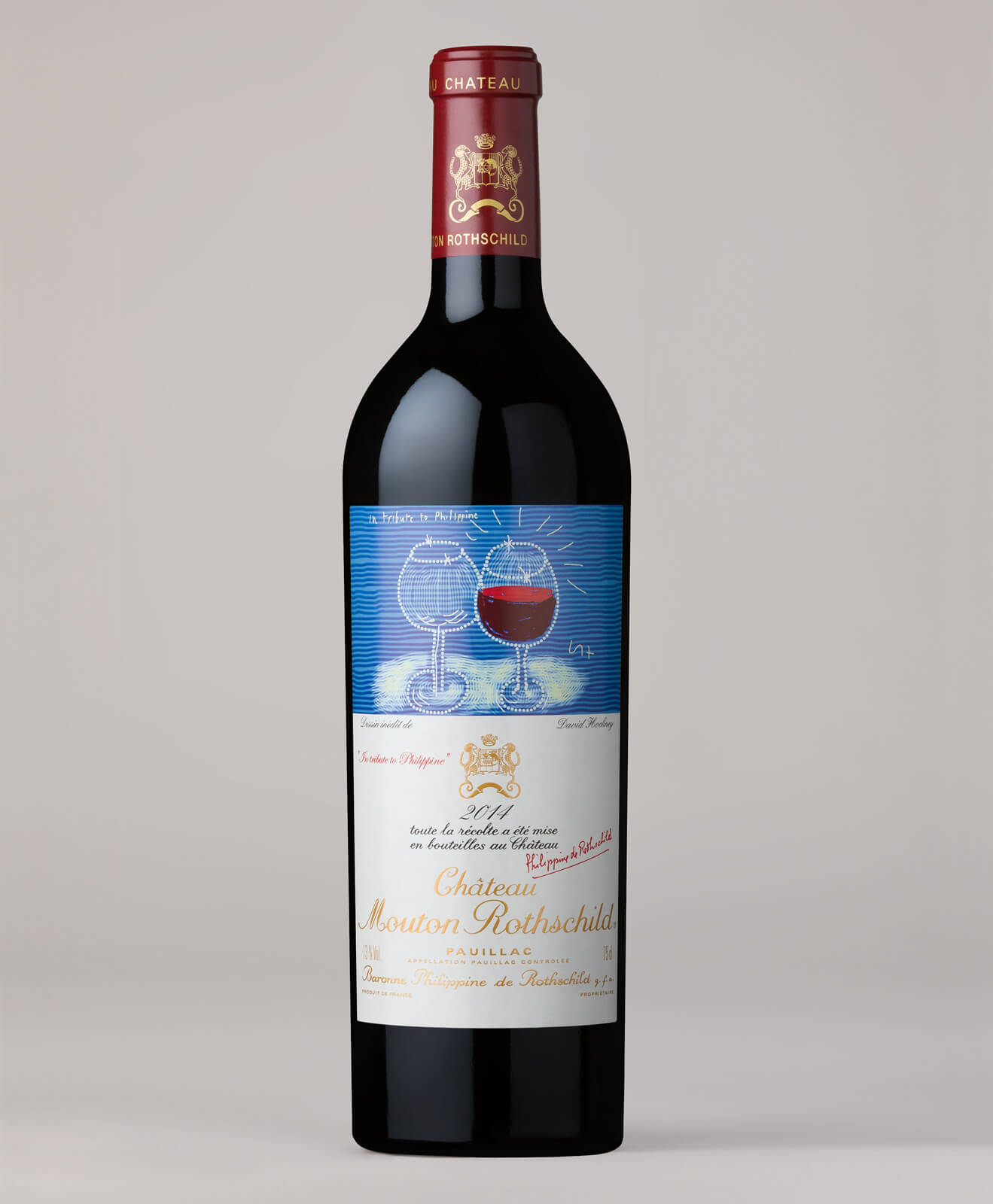 For close to a century, the estate has been putting art on its labels, ever since 1924 when these labels helped Mouton’s young 22-year-old owner at the time, Baron Philippe de Rothschild, to change the way Bordeaux made wine. Back then, most Bordeaux châteaux shipped their new wine in barrels after harvest to merchants’ warehouses in the city. The merchants matured the wine for two years, then bottled and sold it around the world.

Winemaking was a joint effort and quality control was shared between château and merchant. When paper labels became the norm around 1860, the négociants (wine traders) designed and applied them, with the merchant’s name often appearing as conspicuously as that of the estate.

Baron Philippe de Rothschild refused the system and made the audacious decision to have his wine leave his château in his bottles with his labels. But these weren’t the small, ordinary, text-only labels of the era. To show just how different he was, he commissioned a distinctive label from Jean Carlu, an avant-garde French graphic designer specializing in posters and known for introducing Cubism to advertising.

Carlu became the first-ever artist to place a commercial artwork on a wine label. “My grandfather’s initial link to art was the château bottling,” states de Beaumarchais de Rothschild, who is responsible for producing the label today. “It was revolutionary at the time to have the entire harvest bottled at the château with the owner present. He really wanted to change this place to do something different. He felt, before anyone in his family, that there was something to inaugurate and to improve in the wine world. His motivation was the fact that Mouton was classified a Second Growth, and art was a way to say he was different because he was the only one doing that at the time.”

Carlu’s unconventional, Cubist-inspired composition in bold red, black, and gold depicted a ram’s head (the emblem of Mouton or the baron’s Aries horoscope sign) alongside five arrows symbolizing the five powerful dynasties established by the five sons of Mayer Amschel Rothschild, which pierce through a chai. The phrase “ce vin a été mis en bouteille au château” (French for “this wine was bottled at the château”) also featured prominently. 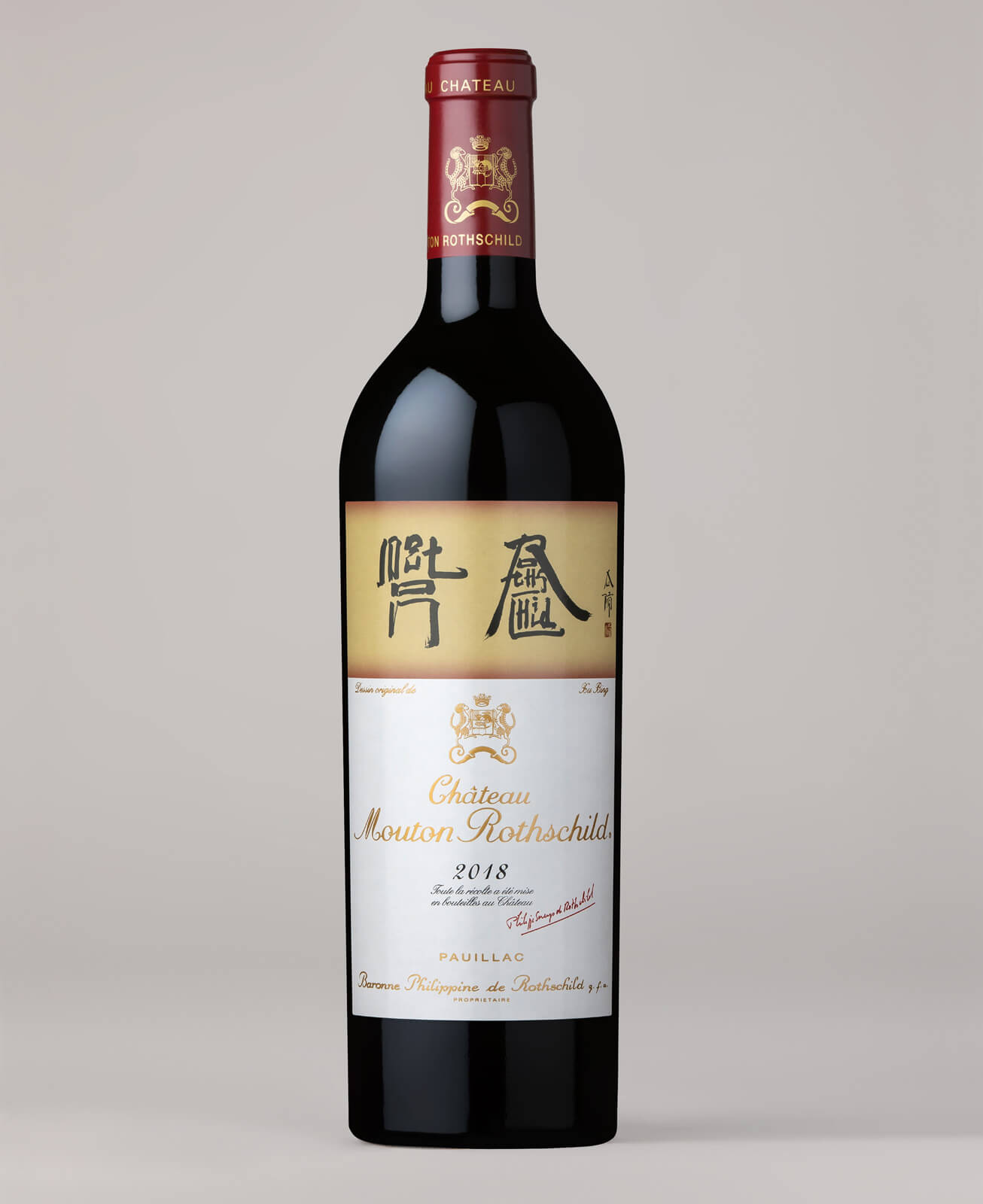 The four Bordeaux First Growths – Haut-Brion, Lafite Rothschild, Latour, and Margaux – followed the baron’s example and estate-bottled their whole harvests. And, gradually, the rest of Bordeaux’s top producers did the same. The customer was now guaranteed that each bottle was an authentic product of its château. 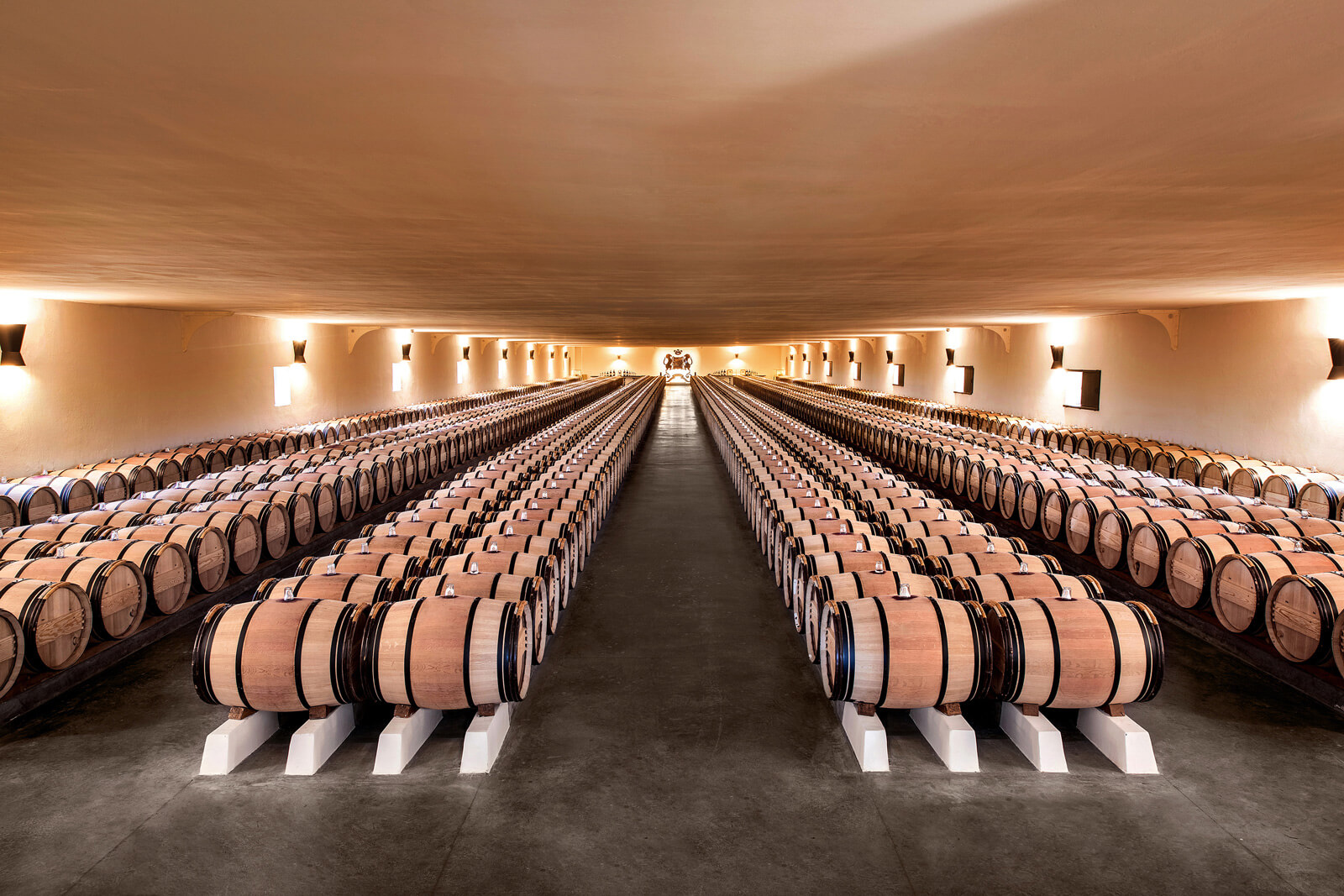 Ahead of his time, Baron Philippe de Rothschild scandalized the highly traditional wine market that fiercely criticized the artist label, and Château Mouton Rothschild subsequently dropped it after three vintages. “This start was so new in Bordeaux, which was very conventional at the time in its habits and its labels, that it was not well received at all,” admits Julien de Beaumarchais de Rothschild. 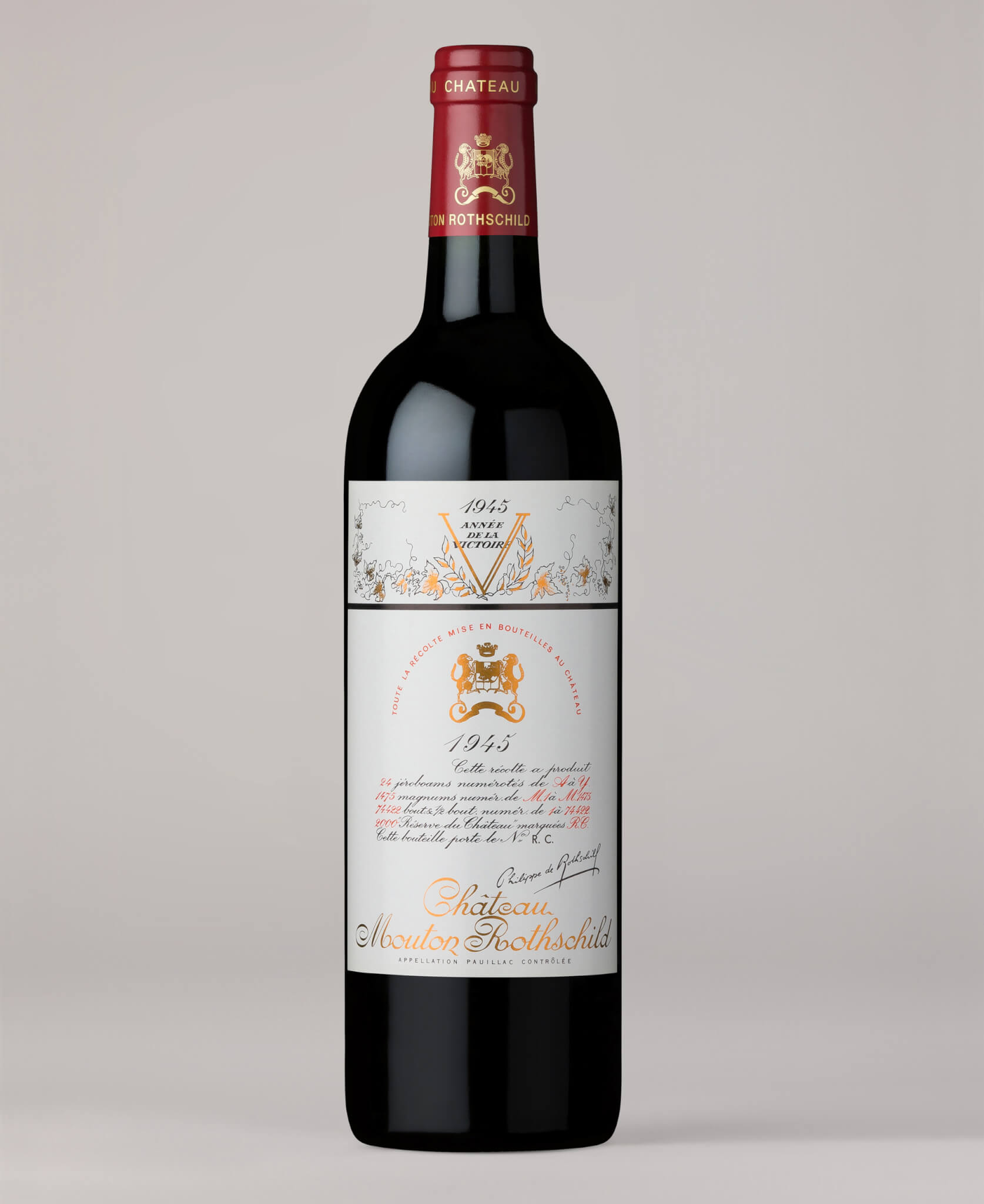 “My grandfather had to change because there was strong protest against the artist label, so he did not continue it.” Nonetheless, undeterred, he waited two decades to resurrect the idea in 1945 to celebrate the end of World War II. The young illustrator and author Philippe Jullian conceived a “V” for “Victory” for the label, which was a roaring success that made Mouton famous again. It was a period when fine artists rarely took part in commercial art, so the early label artists were Baron Philippe’s friends like Jean Cocteau or Jean Hugo. It was very casual, just for fun, and some drawings were even made on napkins at the dinner table.

That all changed when Baron Philippe received an unexpected phone call from Georges Braque, who wished to know more about the artist labels. They didn’t know each other, but Braque eventually became the first artist of international stature to participate. His drawing for the 1955 label was an ink and watercolor of a glass of wine beside a bunch of grapes.

That label was a game changer, as other artists sat up and took notice. Suddenly, famous artists began to appear on Mouton labels like Salvador Dalí in 1958, Henry Moore in 1964, César in 1967, Joan Miró in 1969, and, perhaps the most well-known of them all, Pablo Picasso in 1973, the year Philippe finally achieved his lifelong goal of elevating Mouton to First Growth status.

“My grandfather was the label,” Julien de Beaumarchais de Rothschild discloses. “It was very important for him that below the work of art, you had Mouton to not forget its roots, this amazing terroir that exists nowhere else. The art had a purpose; it wasn’t only art for art’s sake. There was art, but Mouton also.” 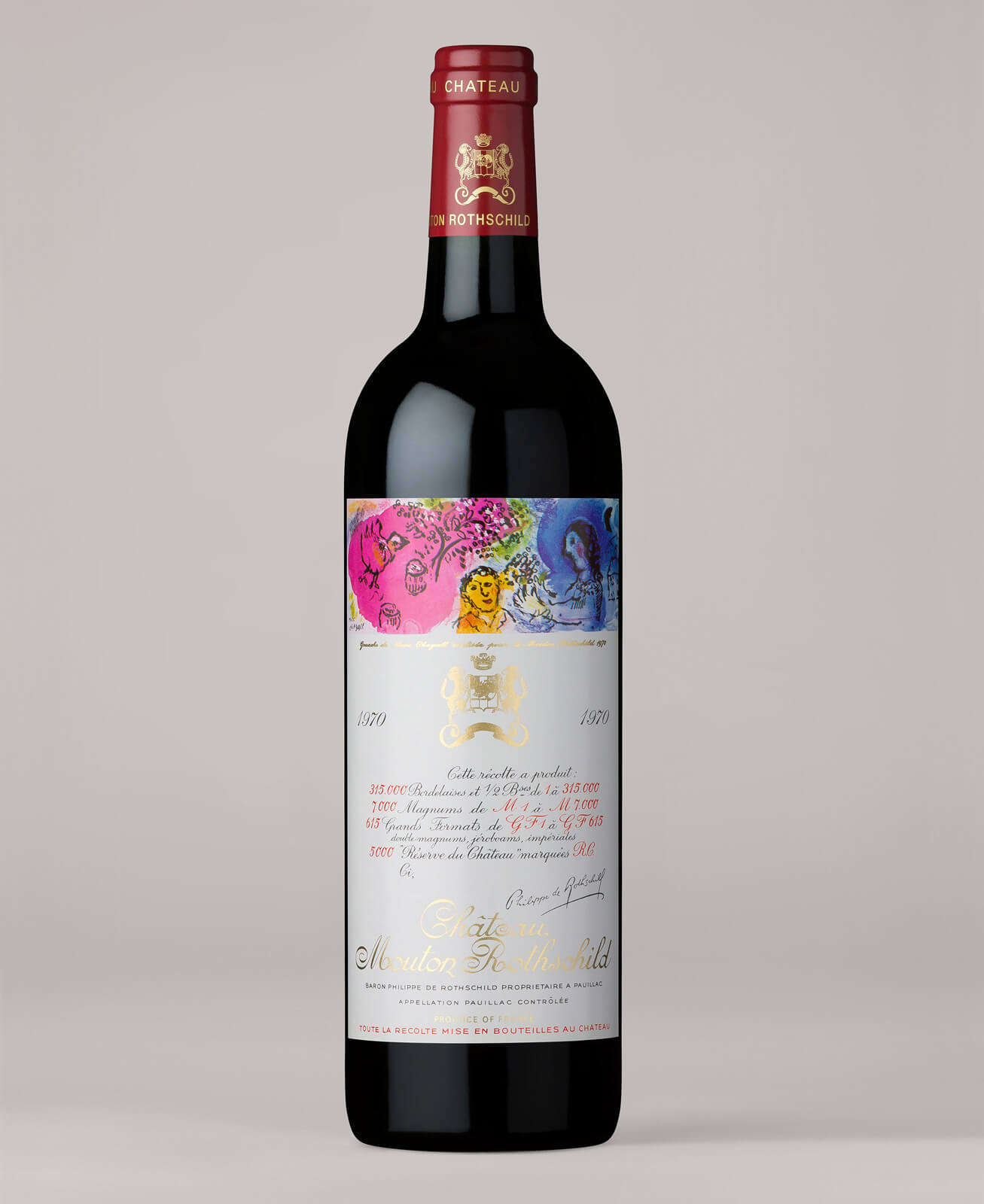 On the 1970 label, Marc Chagall depicted the living fruit of the vine being eaten by a thrush and fed to her chick. For the 1975 vintage, Andy Warhol imagined two whimsical portraits of Baron Philippe rotated sideways, while for the prestigious 2000 vintage, instead of commissioning an artist Mouton Rothschild departed from tradition. The entire bottle became a collector’s item featuring a drawing of the Augsburg Ram, a sixteenth-century, chased silver-gilt drinking vessel by German goldsmith Jakob Schenauer, enameled in gold on the glass.

More recent names have included Bernar Venet, Anish Kapoor, David Hockney, Lee Ufan, Jeff Koons, William Kentridge, and even Prince Charles. “The artist must be like Mouton: an extremely well-known artist who does not need Mouton to promote his or her art,” explains Julien de Beaumarchais de Rothschild. “It’s important that we like the artist, what the artist creates, and the artist’s career.” 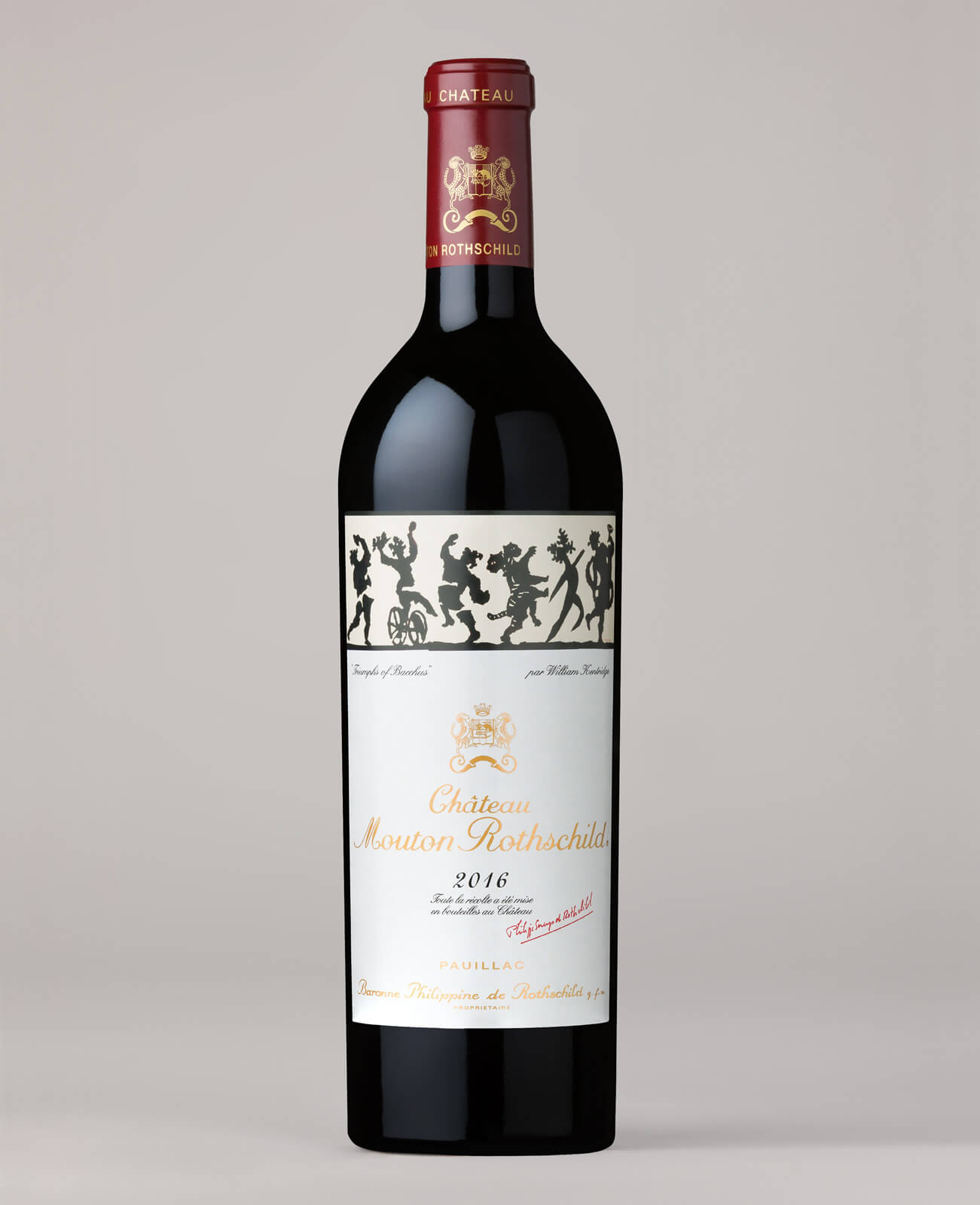 A compendium of the greatest artists of their time that provides an intimate look into the lives of a respected family and the changing times in which they lived, the artist label collection has become a body of work important enough to be exhibited in museums worldwide. “While traveling for the company in the United States, my mother Philippine was invited to an elegant mansion where she saw framed Mouton labels hanging in the entrance hall,” recalls Julien de Beaumarchais de Rothschild. “She was really surprised about why they framed the labels as they’re not the original artworks. There was a sudden shift in her mind, and she thought there might be something to be done with the originals, so that’s why she started searching for the drawings.” 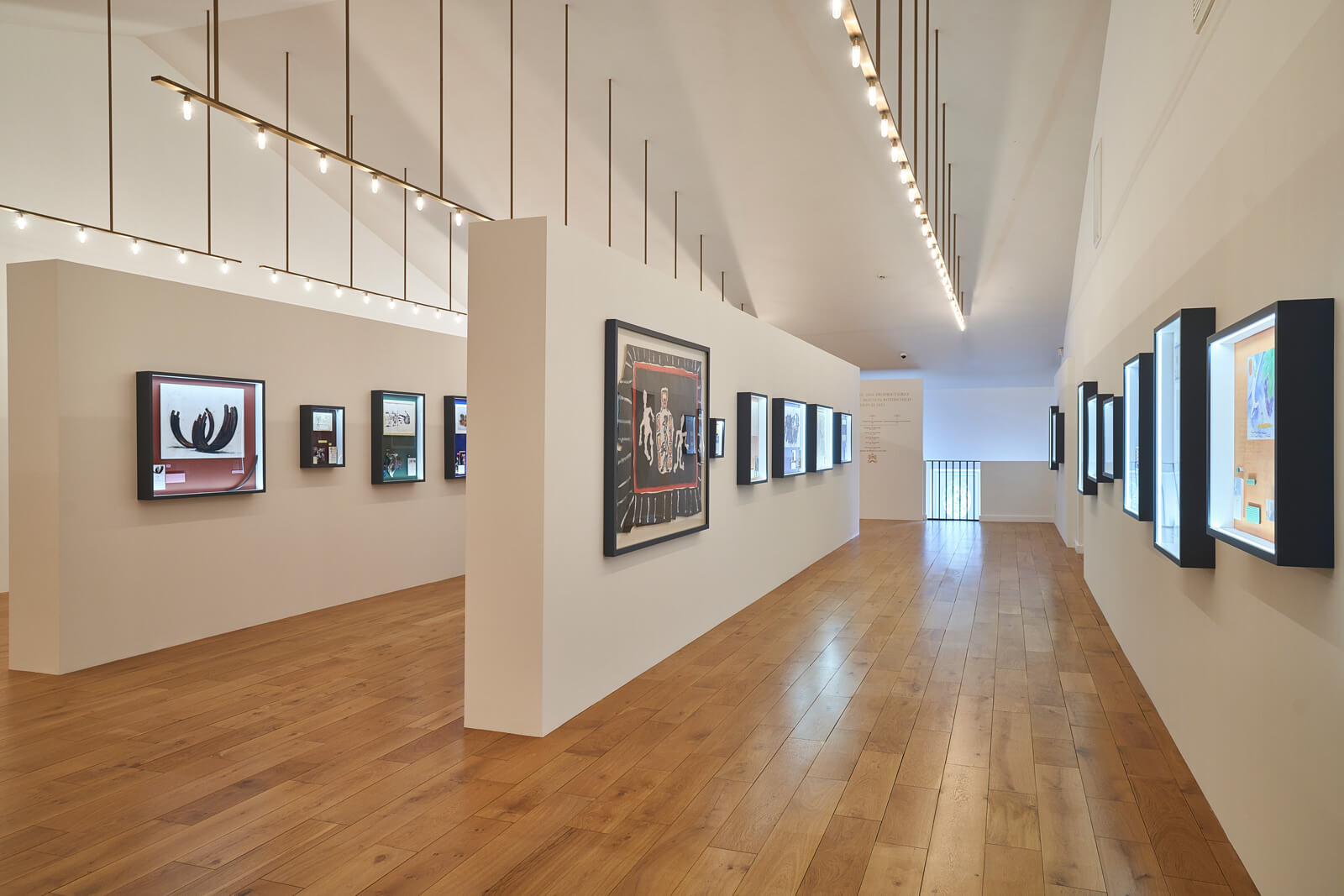 In 1981, Philippine, Baron Philippe’s daughter, decided that the original artworks given to Mouton by the artists and their corresponding labels should go on a traveling exhibition rather than be hidden away, so the labels have been seen internationally in over 40 museums, including the Victoria and Albert Museum in London and the Hermitage Museum in St. Petersburg. 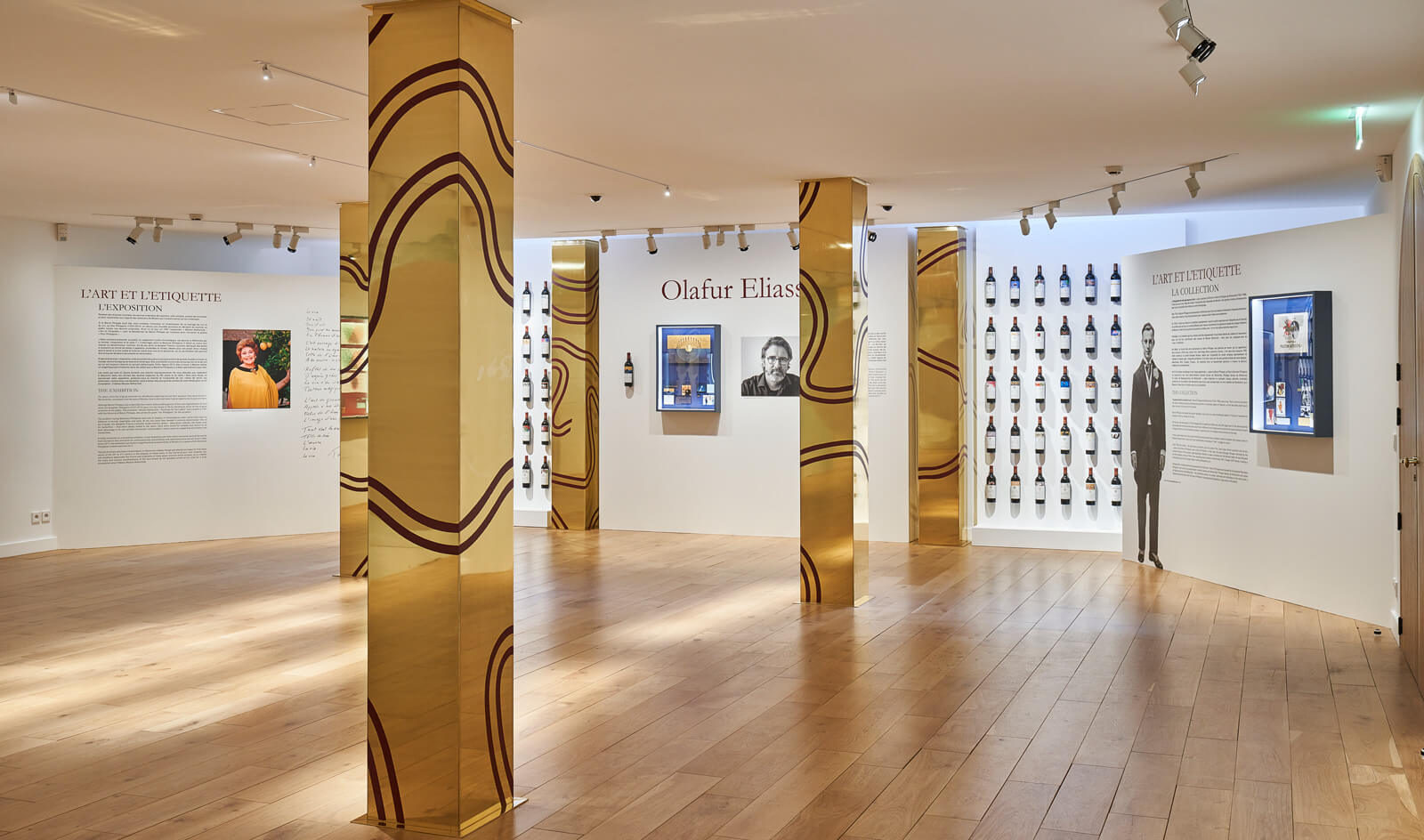 After touring the globe, they found a permanent home at Mouton in 2013, displayed in glass cabinets in the Paintings for the Labels Room, together with information about the artists, artefacts, photos, and correspondence. After several months of renovations begun in September 2021 to redesign the space for these works, led by the architectural firm Mazières, the by-appointment only Paintings for the Labels exhibition recently reopened with new scenography by French designer Hubert Le Gall and display cases restored by artisan Véronique Debord.

The artist who created the most recent label – Olafur Eliasson for the 2019 vintage – is given pride of place in the room. Juliende Beaumarchais de Rothschild had been fascinated by his art for years and visiting Eliasson’s exhibition at the Château de Versailles in 2016 finally convinced him to commission the artist. The result is Solar Iris of Mouton, which is split into two halves: the golden-hued top part represents daytime, while the midnight blue lower part the night. At the center is a mirrored oculus in tribute to Château Mouton Rothschild, surrounded by a ring of ellipses that charts the path of the sun in relation to the estate’s location, which are topped by elongated figure eights known as analemmas showing the declination of the sun recorded from the château at the same time every day of the year.

Eliasson says, “Solar Iris of Mouton is a map of all the sunsets and sunrises that take place over a year at Château Mouton Rothschild. Depicting each hour of daylight and nighttime that go into the growing of the grapes, it is a kind of signature for the vineyard, telling us something about the conditions in which the wine grew and the intimate relationship between the wine and its location. Tasting the wine connects us to the local environment, to the soil, and to the particular weather, seasons, and lighting of the place.”

The relationship between the artists and the estate’s owners has always been complicit, one built on friendship and mutual respect. Though the artists have complete freedom to express themselves on the labels, Château Mouton Rothschild has the last word and may decline or alter artworks. Rather than monetary compensation artists are given several cases of the vintage for which they contributed a label as well as cases of another vintage.

As for the name of the next label artist for the 2020 vintage, it remains a closely guarded family secret. We’ll just have to enjoy a glass of Château Mouton Rothschild while we wait.

Anniversary Wine Suggestions For 2022: What To Drink When The Year Is More Important Than The Price