As regular readers will recall, I subscribe to my pal Terry’s assertion that patronage – specifically buying, wearing, and discussing the works of today’s small independent watchmakers – is a critical part of being a serious collector. 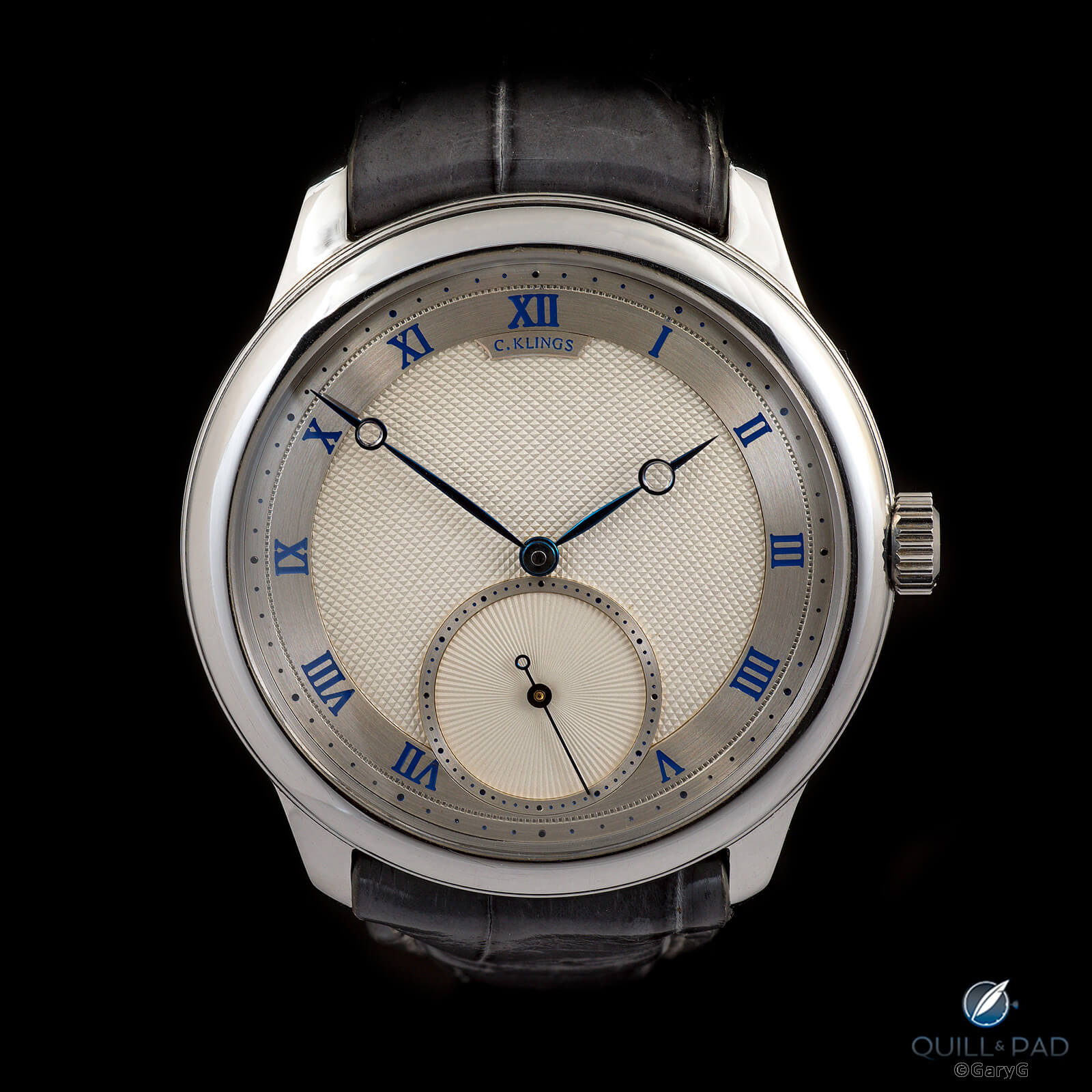 These days, it’s easier than it used to be to work up the courage to buy independent watches as the leading indie makers are now all the rage and many are enjoying full order books – or in some cases, as with the Grönefelds, have completely stopped taking new orders for watches, at least for now.

But it wasn’t always so! Not that long ago, independent watchmaking celebrities were few and far between. As a reminder, it was as recently as 2015 that I wrote an article here that began, “Have you heard of Philippe Dufour?” It took some guts to plunk down five or even six figures for a watch from a relatively unknown maker, and then as now took discernment and taste to select artisans whose work would stand the test of time.

A dear friend of mine has been a master of this practice since the early 2000s. He’s a private fellow, so let’s call him “Chuck.” 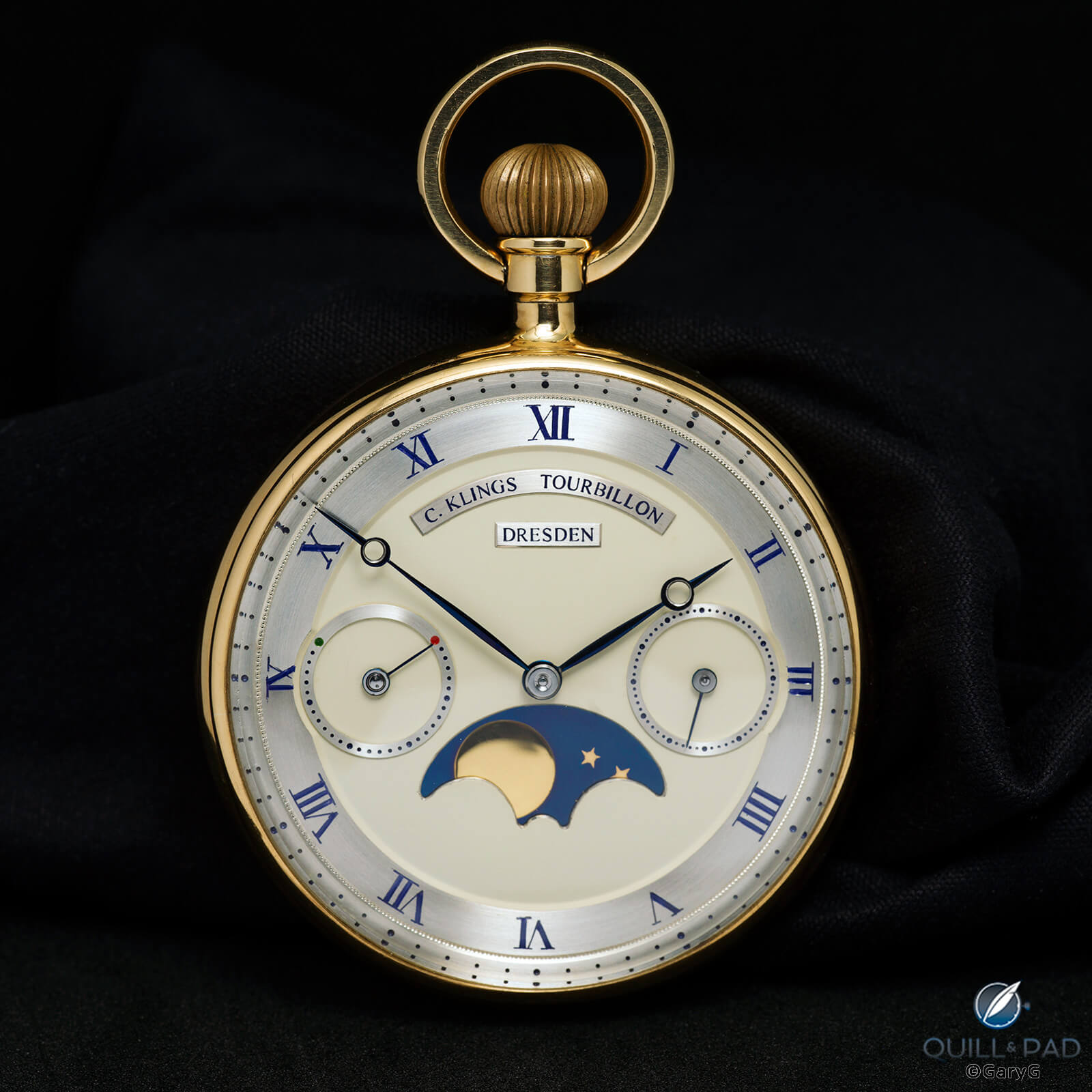 Treasure for the pocket: Christian Klings Tourbillon pocket watch No. 2

Among other things, Chuck was one of the very first customers of a Finnish watchmaker named Kari Voutilainen, and as part of developing a bespoke watch with Voutilainen collaborated with him on what would become the design of the Observatoire dial. He was also a subscriber to Ludovic Ballouard’s launch series of Upside Down pieces, as well as a Dufour Simplicity, and Vianney Halter Deep Space subscriber. And on and on.

Along with many of us back in the day, he was also an active participant in The PuristS AHCI forum, which was where online awareness of independent watchmaking got its start, and where he heard of a watchmaker named Christian Klings.

Fellow Purist “pplater” commissioned a remarkable bespoke watch from Klings in 2012 with slender tourbillon-style bridges and, of all things, a textured silk dial, the latter at the suggestion of the watchmaker. 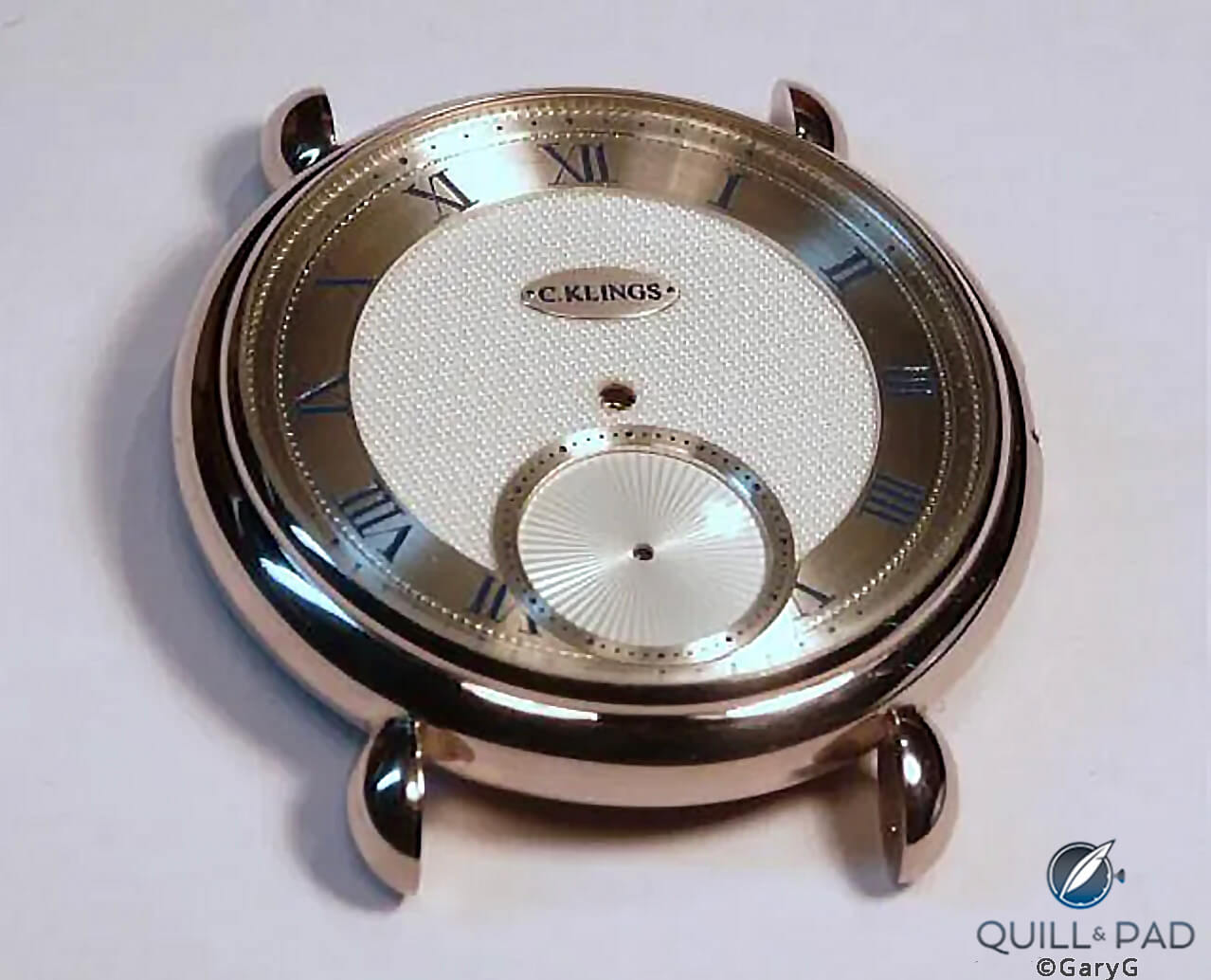 Chuck followed these developments with interest, but it wasn’t until 2017 that he acquired his first Klings watch: a quite special detent-escapement tourbillon pocket watch purchased at auction. 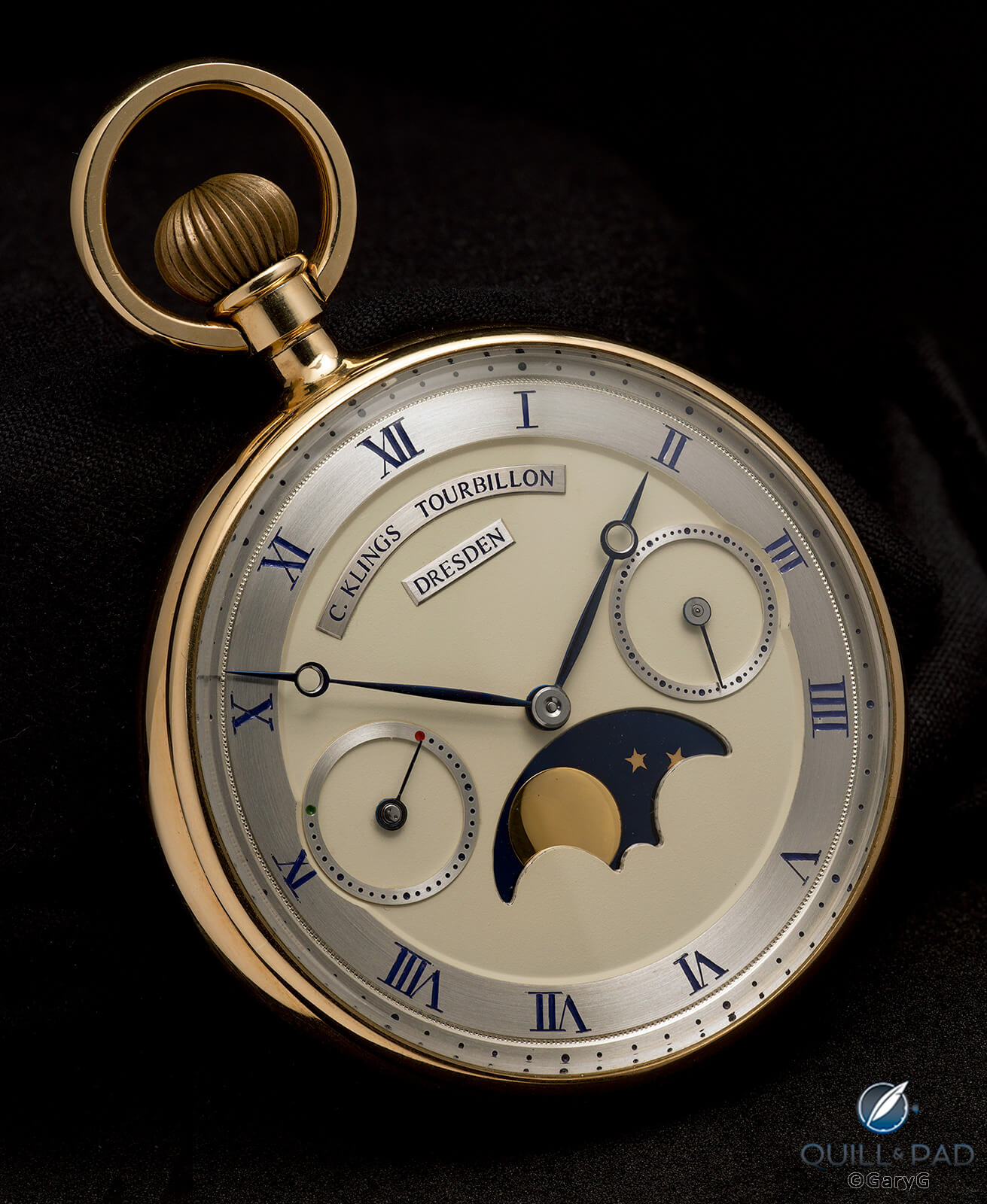 Following his purchase, Chuck wrote to Klings seeking more information about his newly acquired treasure. Klings responded in detail, setting out the history of the watch and its innovative features.

Klings began working on Tourbillon No. 2 in 2001 but felt that he lacked the experience to complete it given the complications he wanted to include. In his own words, “Once in a while I was looking in the box (of parts) and felt very sorry about it. Years went by, and during sleepless nights I made numerous drawings until it was figured out to make the mechanism work properly. After that, the drawings with the unfinished movement have been laying in the box for another couple of years. About 2016, I said, I cannot take it anymore. Now I have the experience to make it work right; let’s finish the timepiece. And about 700 hours later the watch was finished.” 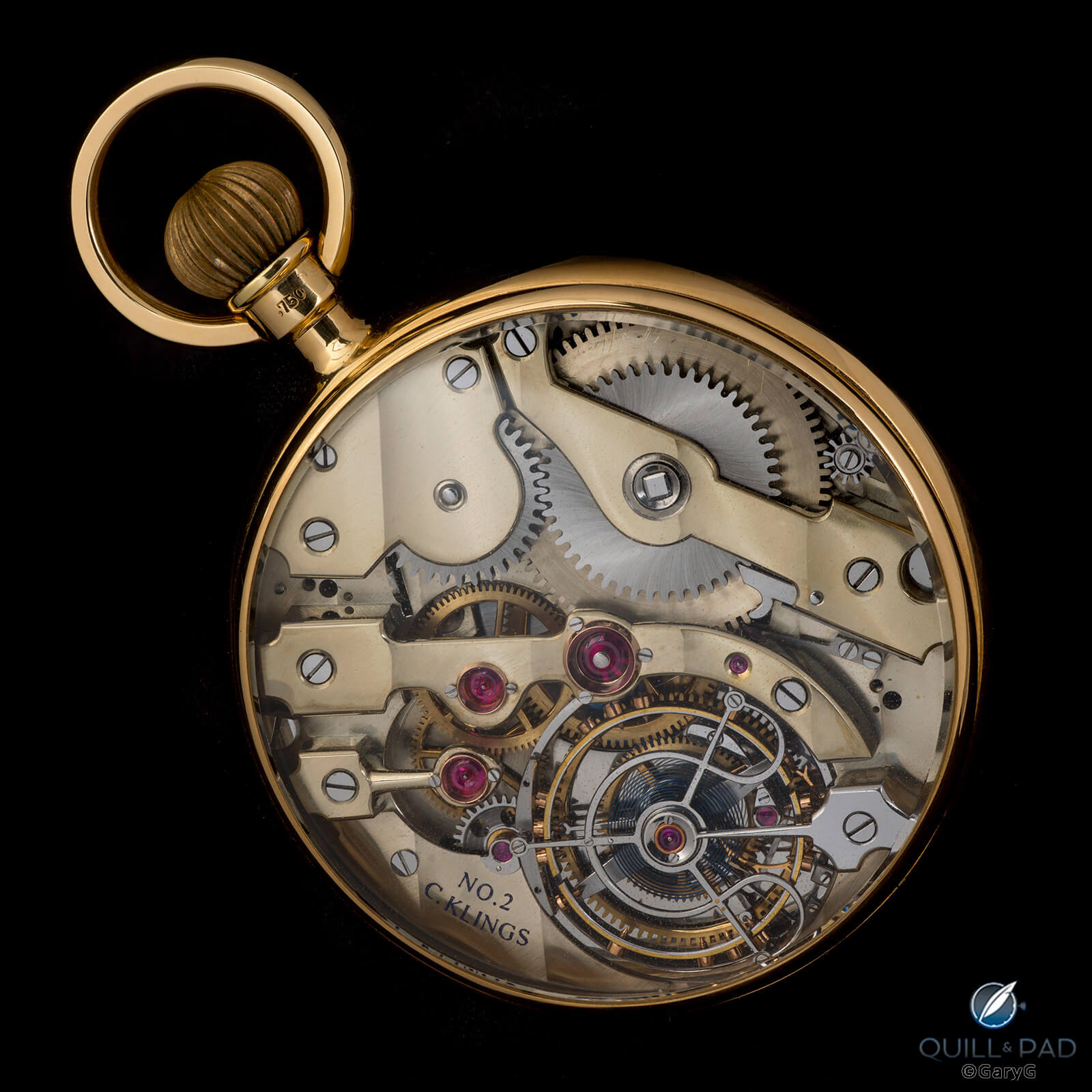 Based on an early twentieth-century “Apogee” Swiss movement in German silver, the No. 2 was extensively rebuilt and modified by Klings, with the moon mechanism, up-and-down (power reserve) mechanism, zero reset return, detent escapement, some bridges, and start/stop mechanism made from scratch. As you can see above, it’s also beautifully finished, with clean beveling, a delightfully thin tourbillon cage, and broad, shallow Geneva waves. 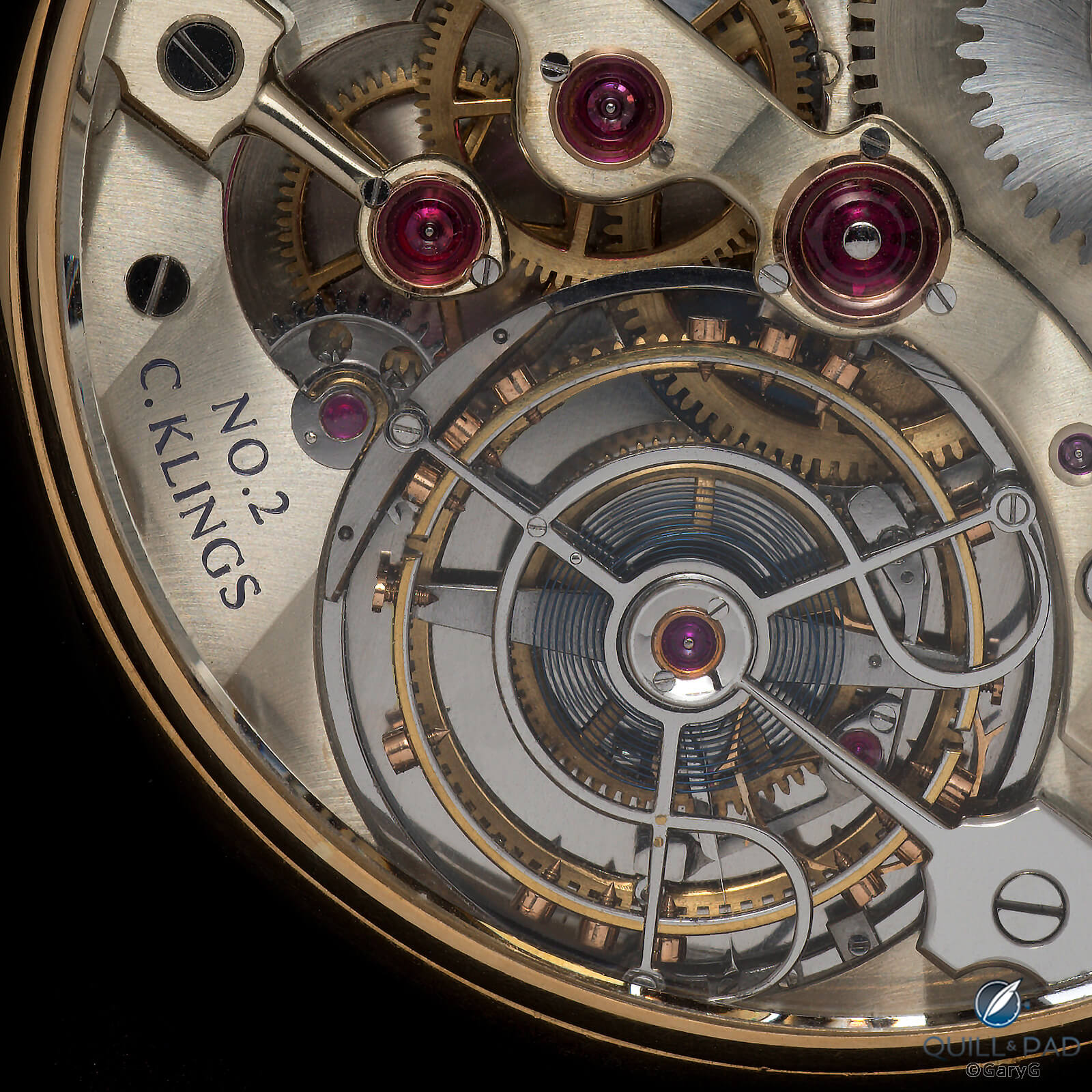 And, check out the split bimetallic balance and mouth-watering screwed chatons in the detailed view above! By the way, the balance swings at a majestic 14,400 vibrations per hour, which Klings describes as having “a calming effect to the heart and the brain.”

The dial side was completely fabricated by Klings by hand in his workshop. Here’s a look at work in progress on the moon phase disk, with rough moons cut out before being turned on a lathe to the correct size and hand-polished to a domed mirror finish. 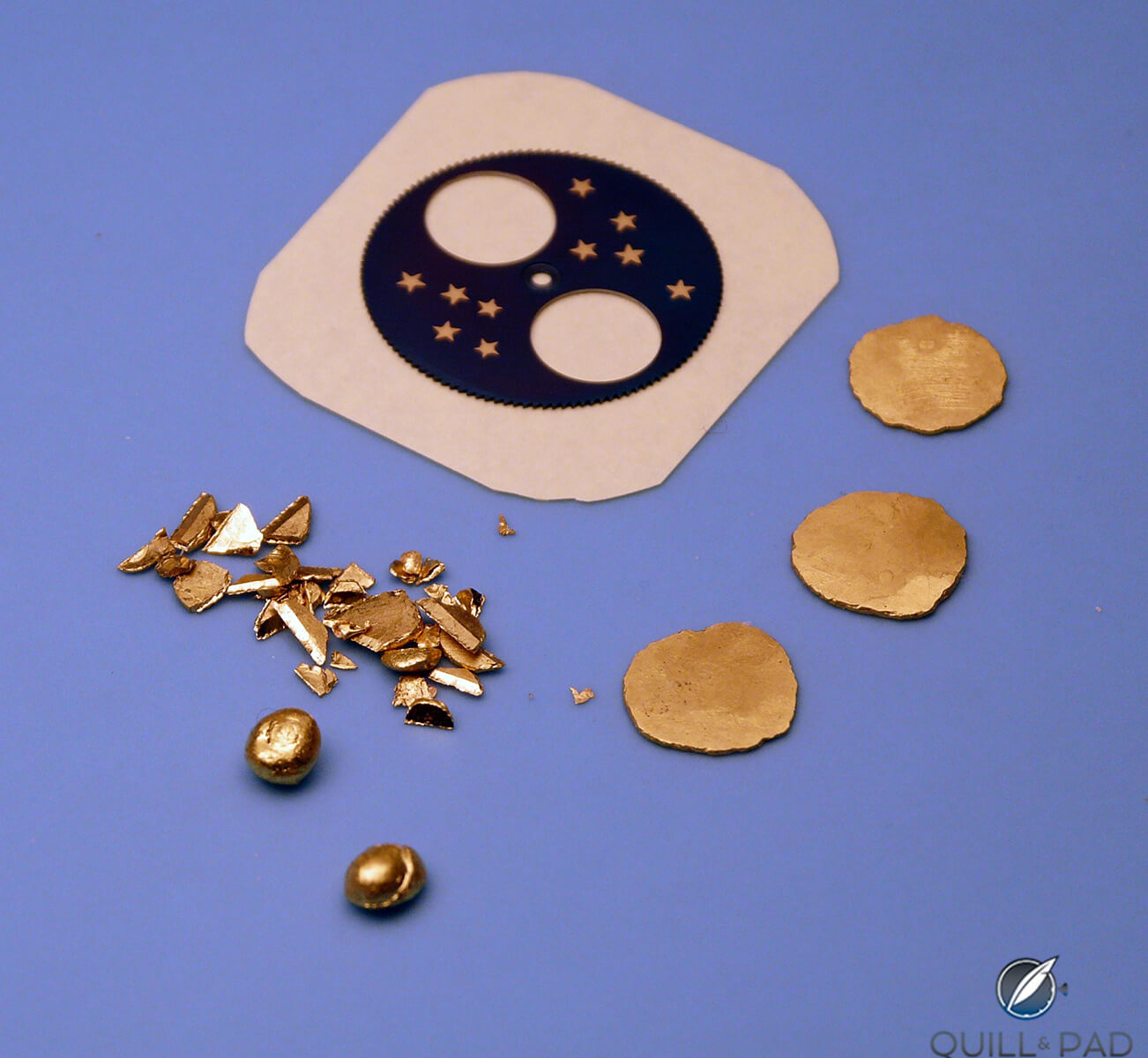 Klings also made the case: in the photo below it’s difficult to avoid being mesmerized by the movement view, but if you can tear your eyes away and focus on the case you’ll see the vertical joining line at lower right where the ends of a strip of gold have been fused to make the case band as well as the small notches above the second zero in “0.750” that indicate the proper alignment of the caseback when snapped onto the watch. 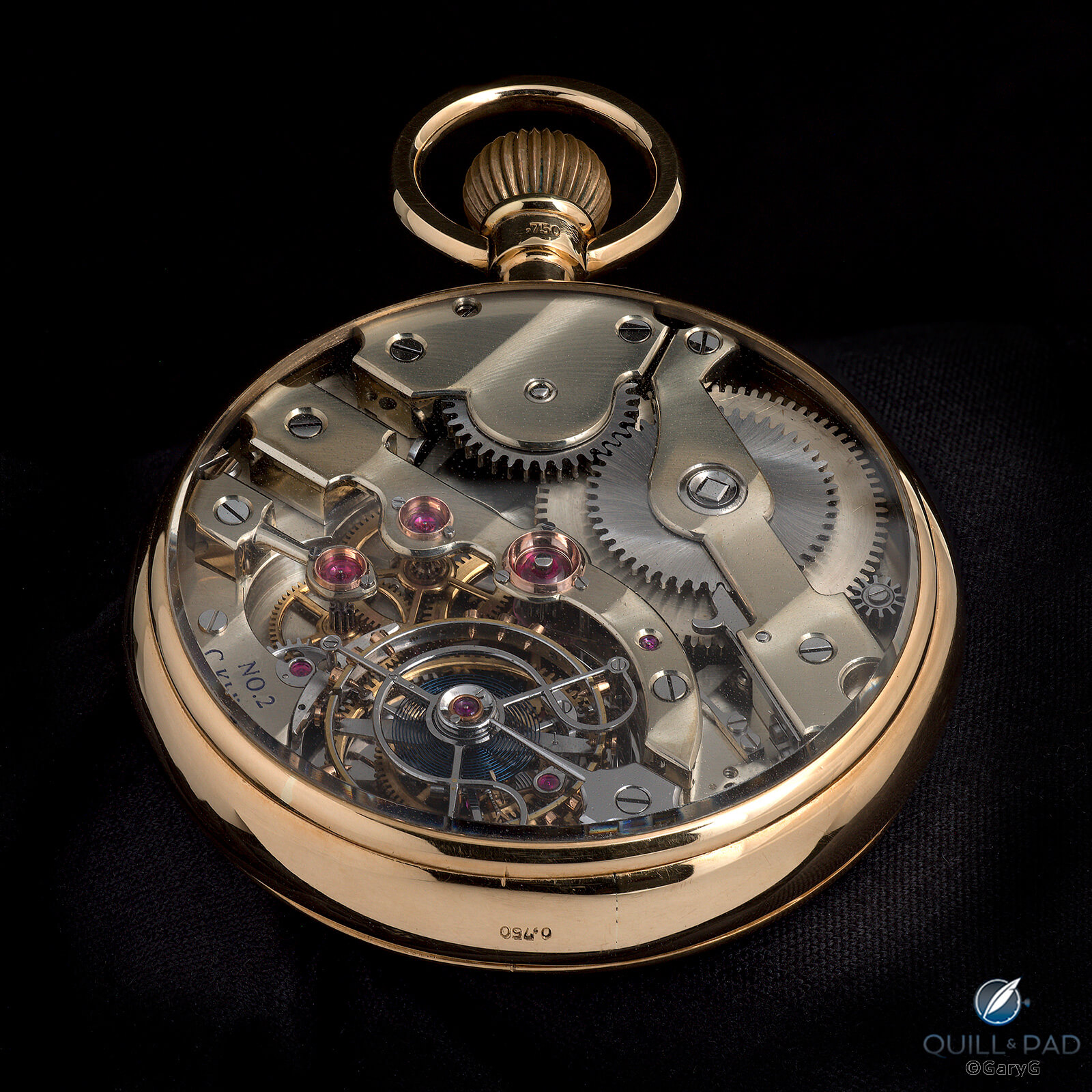 Movement and case view, Klings No. 2

Just because I can’t resist, here’s one more view of the dial side showing the handmade multi-element dial, Breguet hands with small polished sinks, engraved and filled Roman numerals, and that lovely, big moon phase dial. 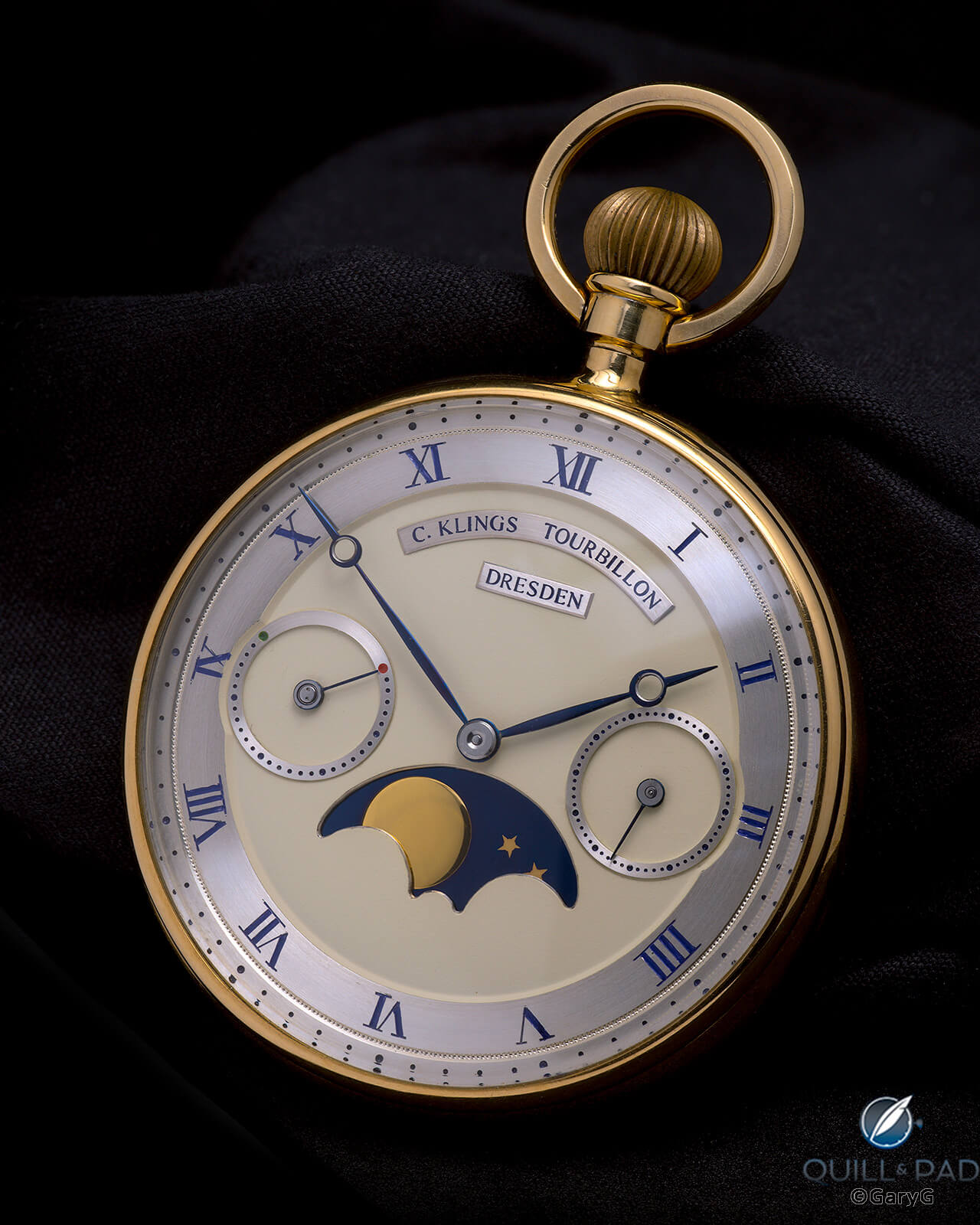 As soon as Chuck had the pocket watch in hand, he knew that he wanted to commission a bespoke wristwatch to his own specifications. That wasn’t quite as simple as it may sound as Klings’ production was extremely small – perhaps 30 watches in total over his career – and saying “just make another one like you did for X” wouldn’t work as Klings had a practice of never repeating a given design.

In a stroke of luck, Klings had planned to make one more watch that year, and Chuck jumped on the opportunity to specify a simple three-handed 37 mm wristwatch in his preferred case material, stainless steel. 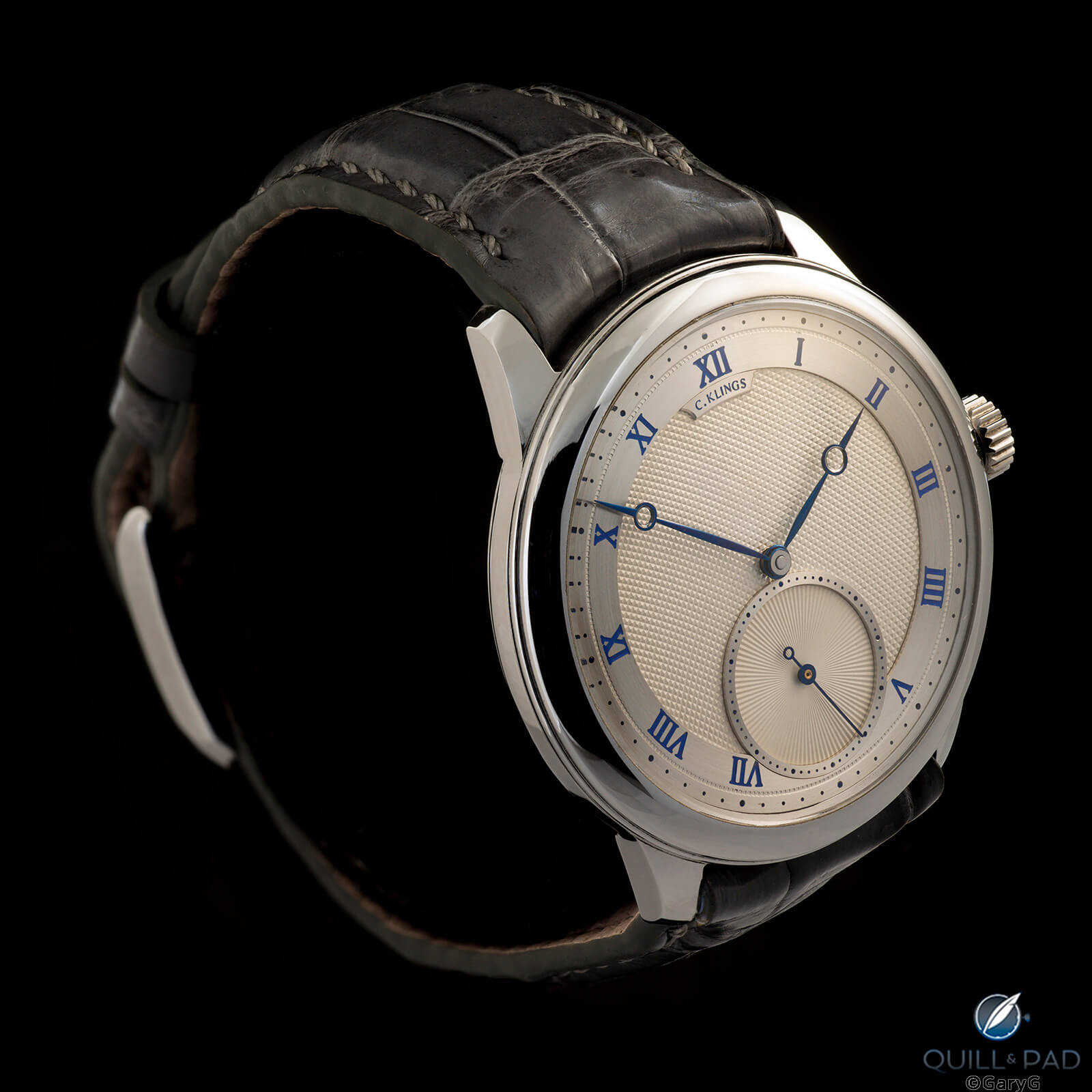 While simpler than the pocket watch, as seen from the dial side this one is no less appealing to my eye. The multipiece construction, filled, engraved Romans, and delicate hands with polished sinks carry over themes from the pocket watch, while the guilloche patterns of the main dial and seconds subdial provide points of difference. I’m also a fan of the straight lugs on a 37 mm watch, allowing for a classic case size while giving a bit of additional visual presence on the wrist.

Speaking of which, I did sneak the watch onto my arm for a quick wristshot (sorry, Chuck!). I loved the way its narrow profile sat flat on the wrist, and the steel case seemed just right in weight to make me aware that the watch was there without giving a sense of undue heft. I would have preferred an anti-reflective treatment on that domed crystal though as getting a clear photo without a bunch of untoward reflections proved pretty much impossible. 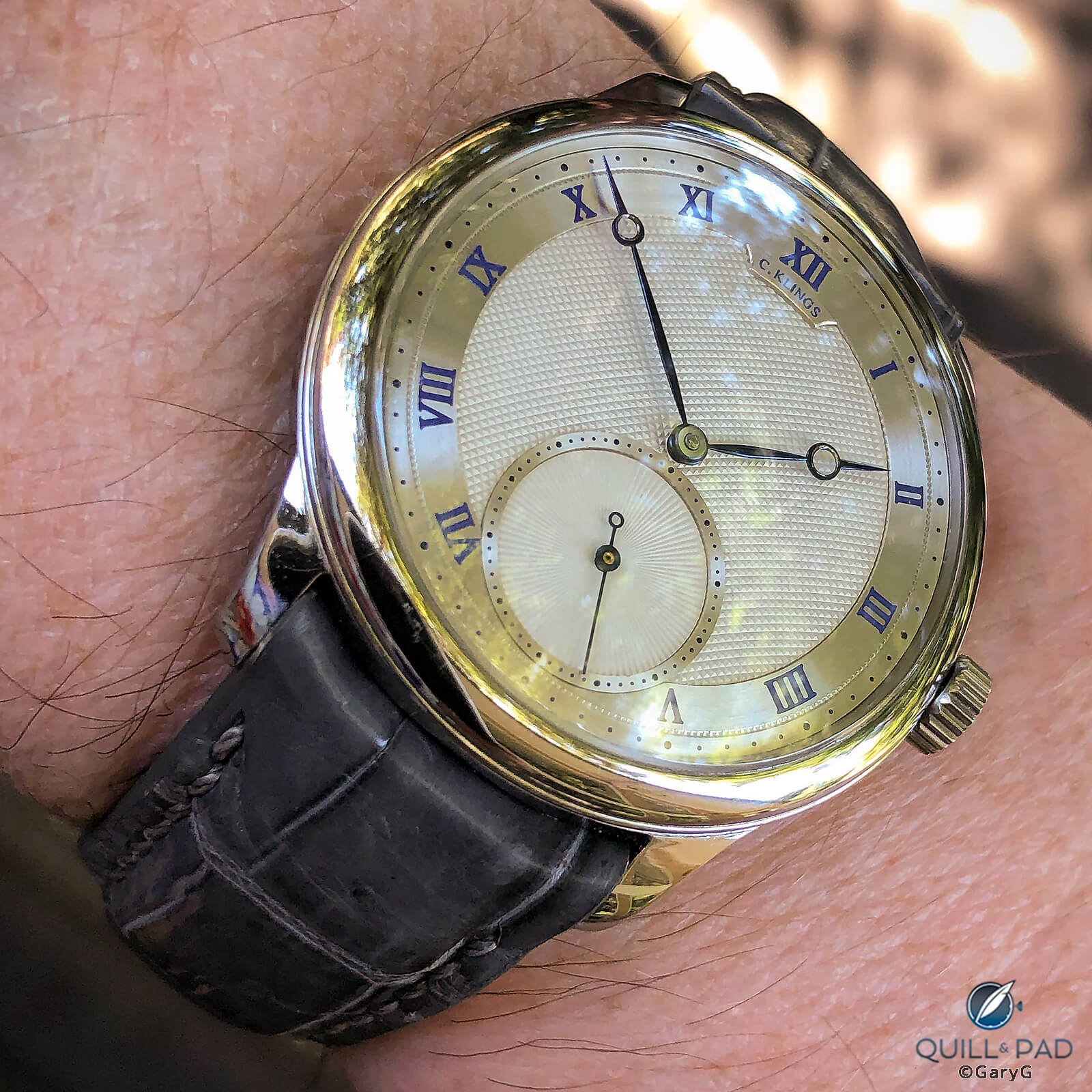 On the wrist: Christian Klings No. 8

The movement here is considerably simpler in appearance than that of the pocket watch, but still incorporates those broad stripes and some custom touches specified by Chuck, including an arrow-shaped balance cock. 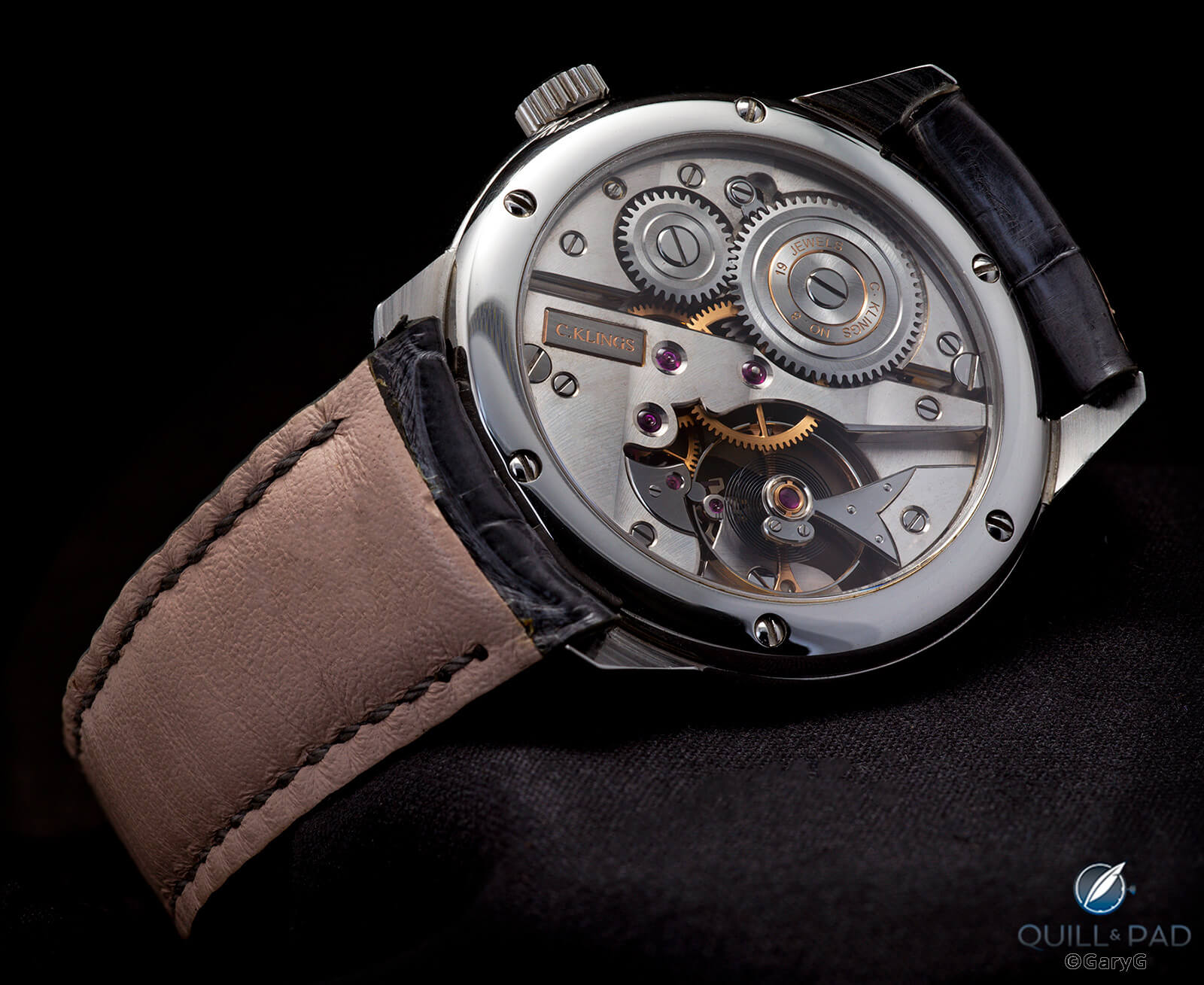 Case back view, No. 8 wristwatch in steel from Christian Klings

Taking a low angle view of the movement both gives a better look at the hand-beveling applied by Klings and a sense of how he was able to give dimensionality to a movement that is quite thin. 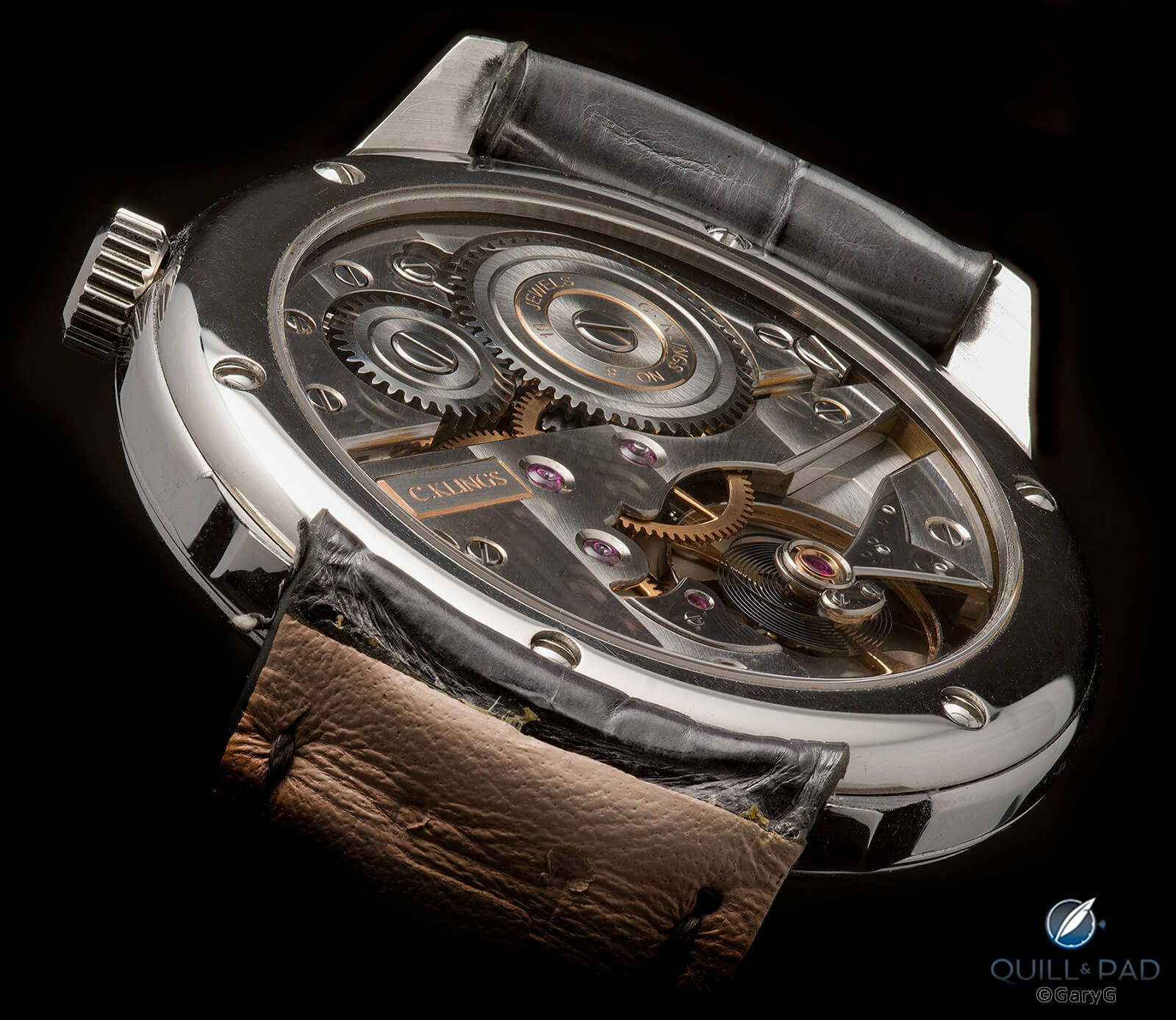 While I had the two watches in hand, I took the opportunity to shoot them side by side. From the movement side, the differences in design and historical era are quite evident, but each has its considerable appeal. 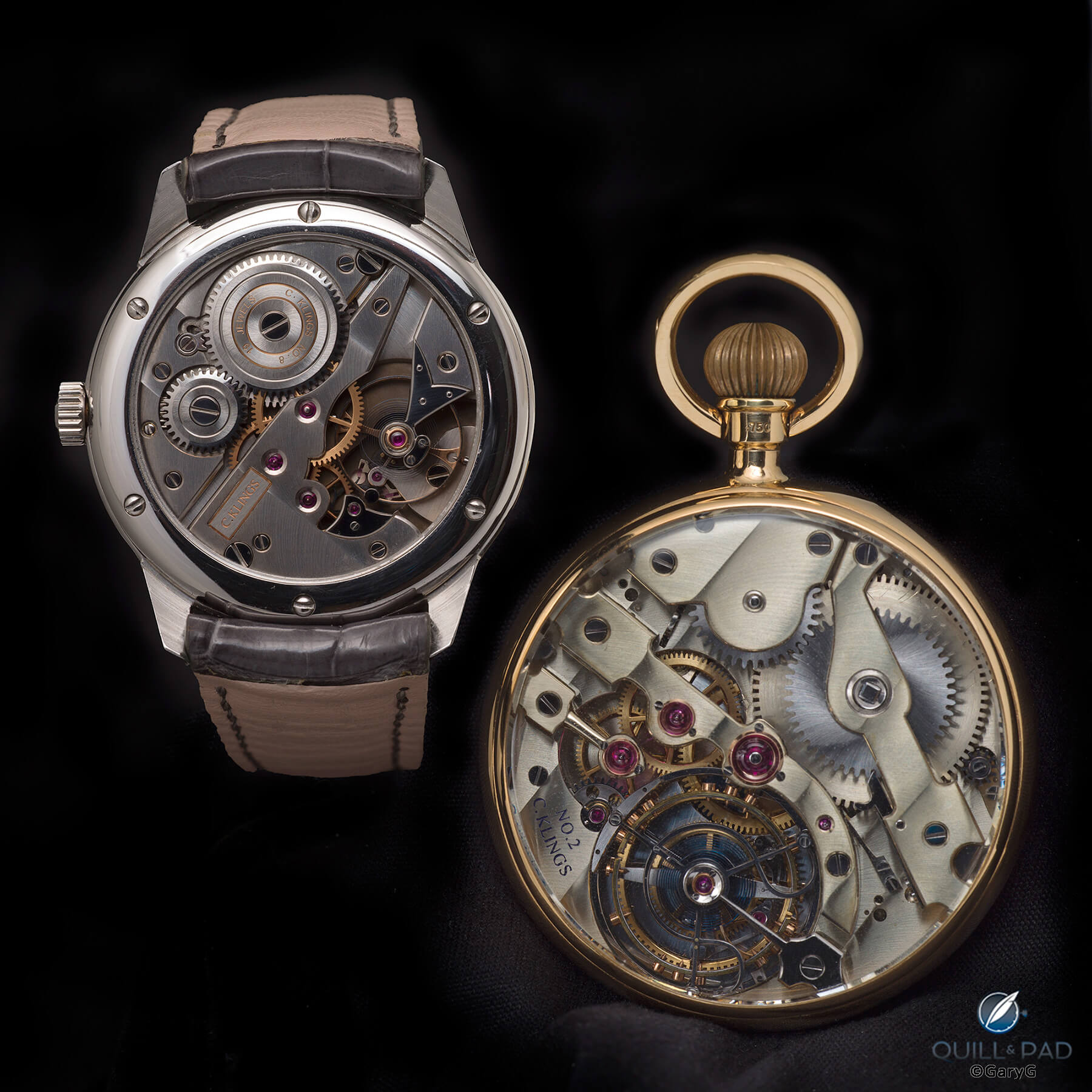 Two eras, one craftsman: movements of the Klings No. 8 and No. 2

And on the dial side, while the matte eggshell central finish and prominent moon display of the pocket watch are hard to compete with, for me the wristwatch is gorgeous as well. 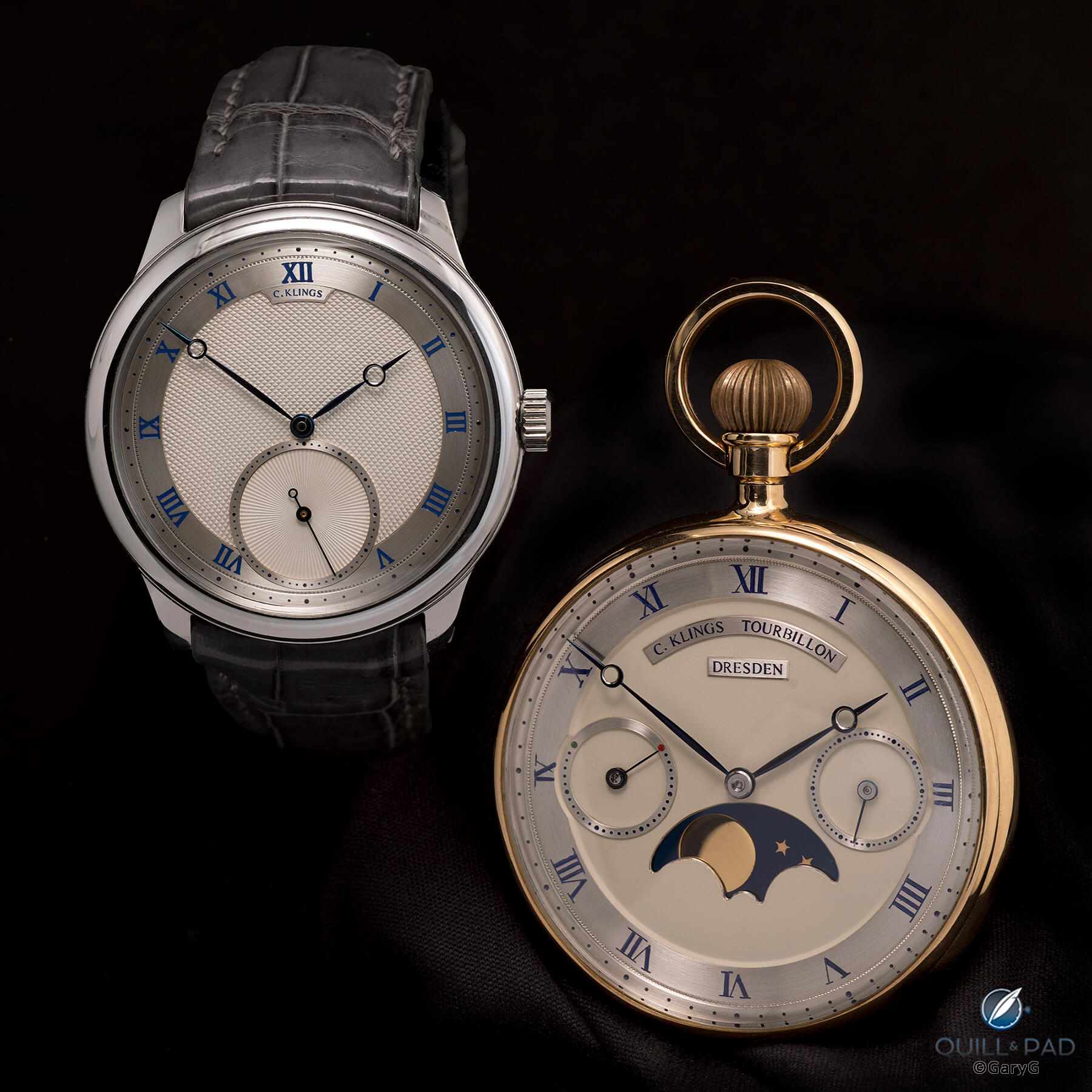 Wrist or pocket: side by side view of Christian Klings No. 8 wristwatch and No. 2 Tourbillon pocket watch

My understanding is that Christian Klings has called time on his watchmaking career, so unless he can be persuaded otherwise your only chances to own one of his masterworks will be to keep a close eye on forthcoming auctions and to work your own private networks. If that doesn’t work, the good news is that you too can become a “Chuck” by learning as much as you can about lesser known but still brilliant independents, polishing your own tastes, and becoming a patron of someone who could be tomorrow’s Christian Klings. 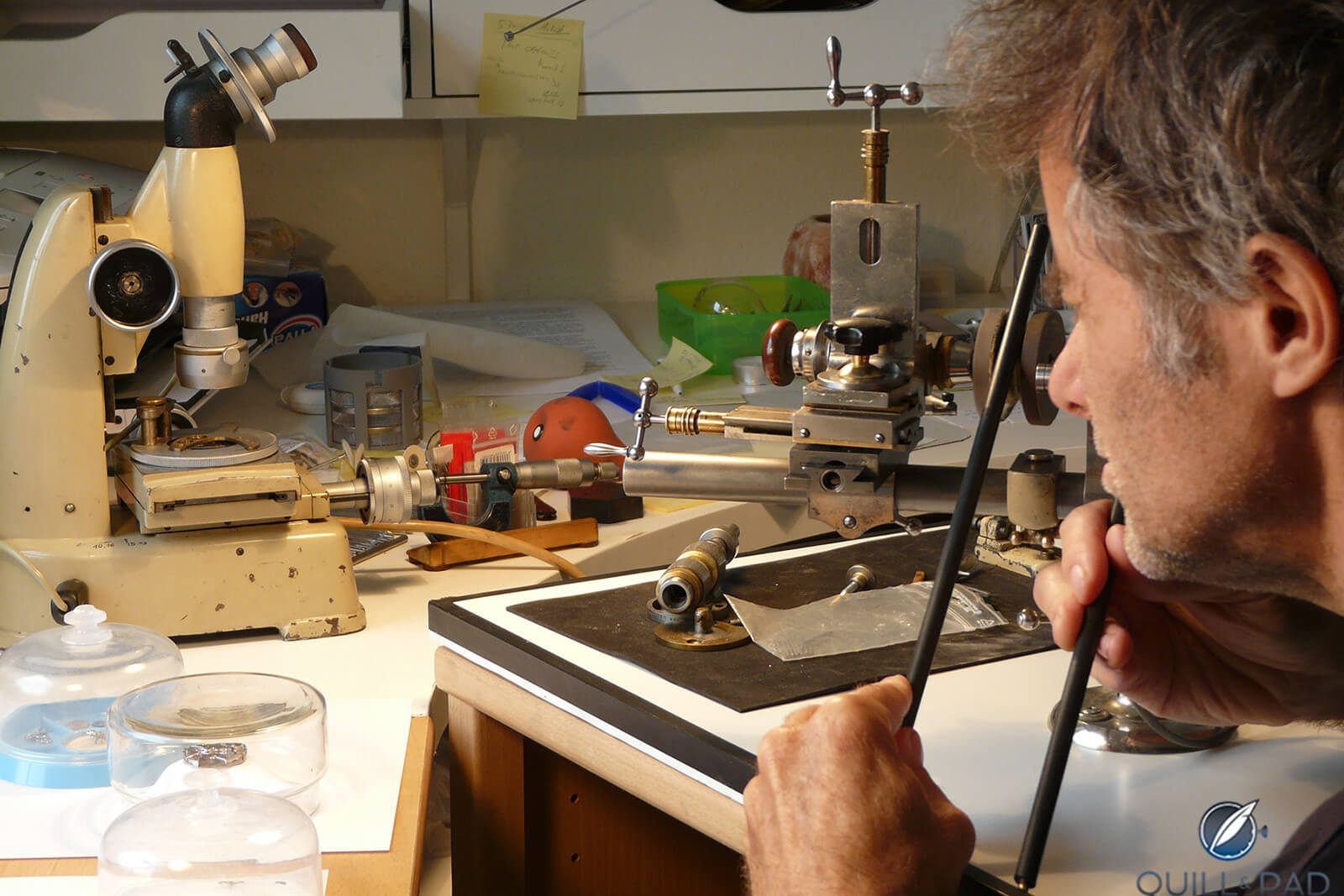 I’d love to hear about your favorite lower-profile indies in the comments section. In the meantime, happy hunting!

Why Philippe Dufour Matters. And It’s Not A Secret

Why I Bought It: Ludovic Ballouard Upside Down