The year 2022 marks the centenary of the discovery of King Tutankhamun’s tomb, which sparked a new wave of Egyptomania when it was found by British Egyptologist Howard Carter.

Though an interest in the culture of ancient Egypt actually dates to the early Greeks and Romans, the chance finding of the young pharaoh’s tomb in Egypt’s Valley of the Kings in 1922 captured humanity’s collective imagination in a particular way. Well over 5,000 artifacts were eventually recovered from the site.

American Egyptologist Kent Weeks explained Egyptomania in a recent edition of Getty, the online cultural magazine: “Egyptomania means two things. First, it’s the interest in ancient Egypt in popular culture – National Geographic television specials, films like The Mummy – things that appeal to the ordinary person on the street. Second is the enthusiasm with which modern people take bits and pieces of ancient Egyptian culture and insert them into contemporary culture in things like architecture, design, or objects.”

Cartier and others introduced Egyptian-revival jewelry and some pens in the early 1920s, not long after King Tut’s tomb was opened. Much more recently in 2020, Montblanc turned to ancient Egypt with its Heritage High Artistry Egyptomania Limited Edition collection.

This year, Montegrappa and Visconti each introduced limited edition Tut-inspired pen collections in honor of the centenary. They share some thematic subtleties, though each is different in looks and price point, representing the proficiencies and the audience of the respective companies. Tutankhamun’s gold death mask – one of the best-known works of art in the world – is delivered by both brands.

There are two versions of the Montegrappa Tutankhamun, one in vermeil and another sculpted in 18-karat gold, each recreating the gold death mask on the cap. Here, Montegrappa shows off its métier of engraving, along with enameling and stone setting, to recollect a likeness of Osiris, the Egyptian god of the afterlife, which is the centerpiece of the mask. 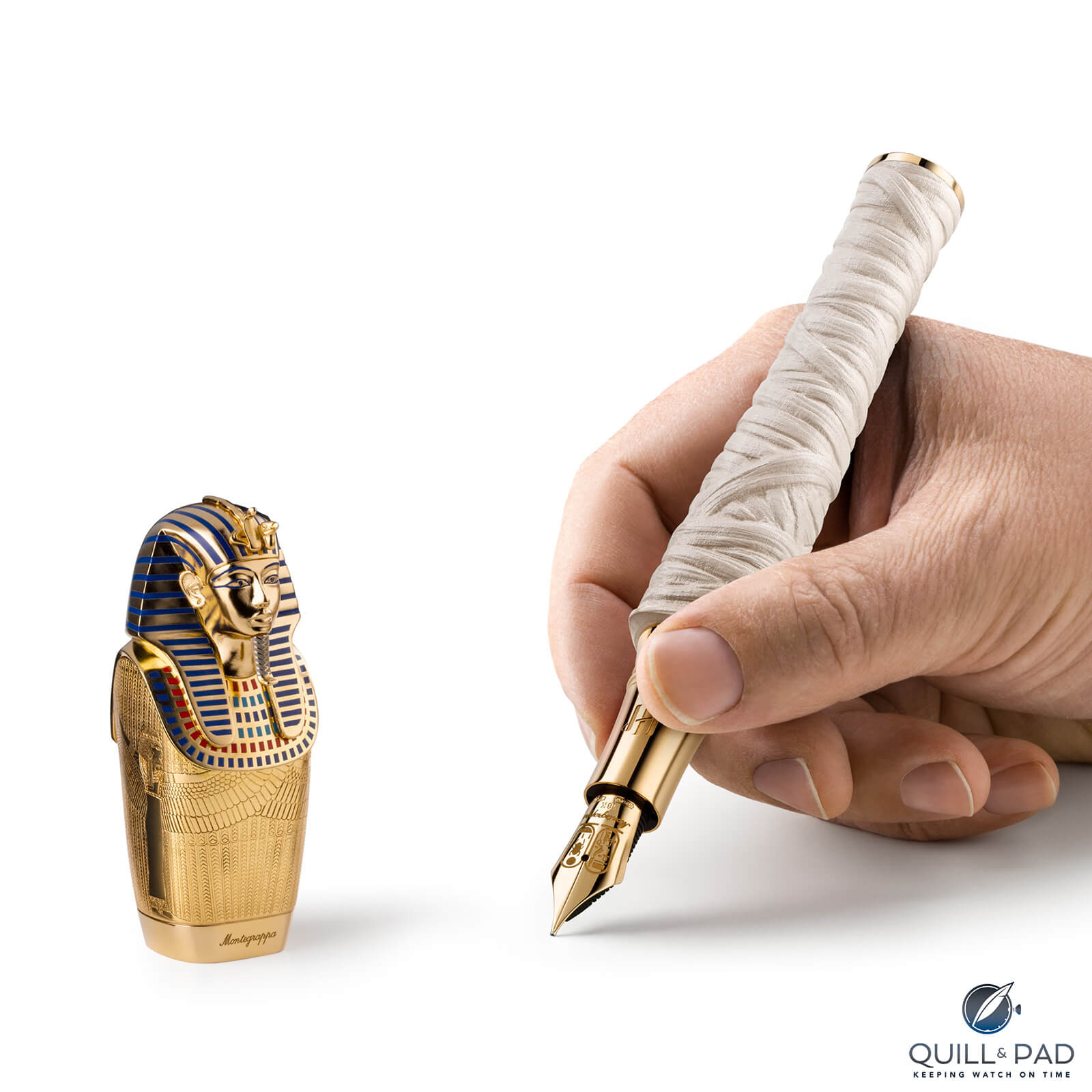 The discovery and clearance of Tutankhamun’s tomb was a multiyear process; the death mask was not found until 1925. Montegrappa does an amazing job in suggesting the phases of this unearthing in its intricate pen packaging, the outer portion of which implies the burial chamber, which is decorated with colorful imagery. Inside is a likeness of a sarcophagus with a clear lid that allows a view of the golden coffin within. Inside the body-shaped coffin is the final prize: the pen. 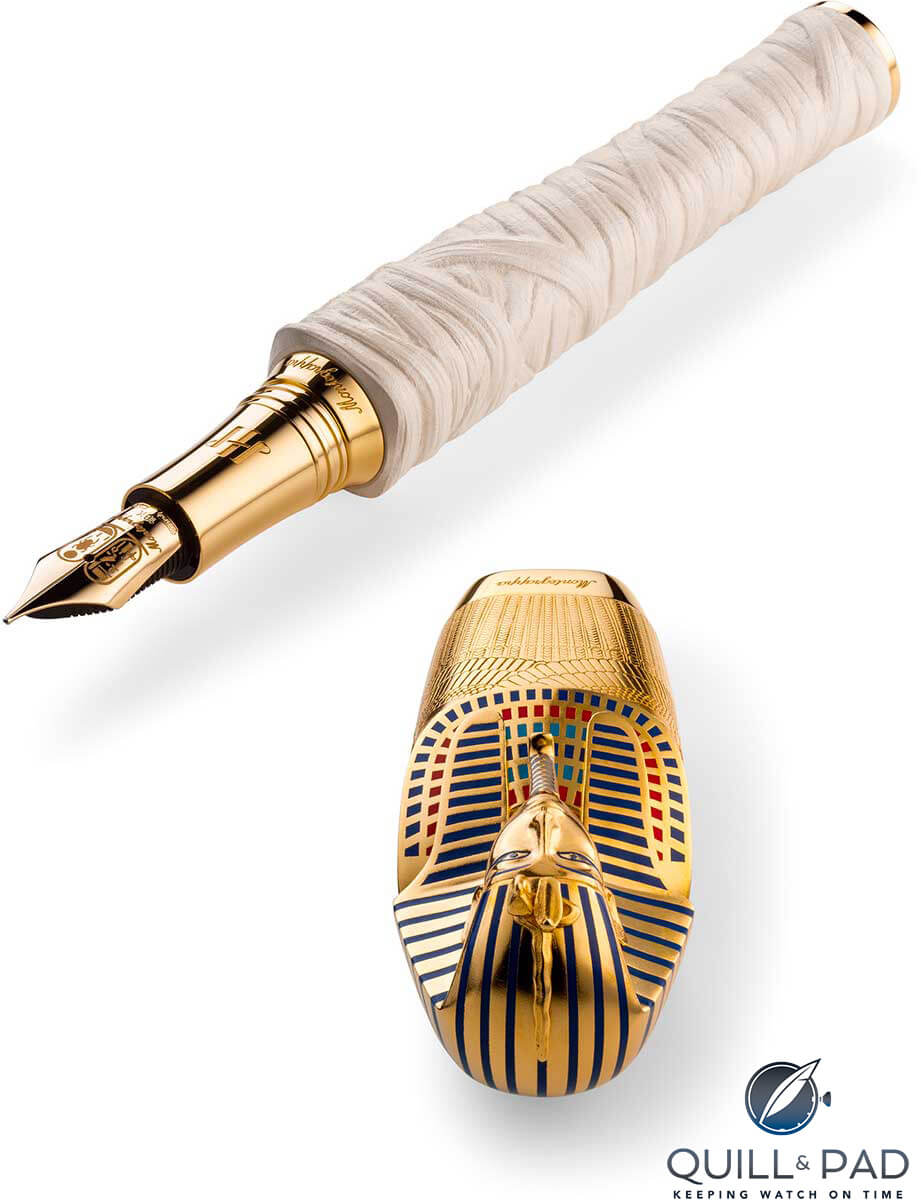 There are 100 fountain pens and rollerball pens in vermeil and just ten pieces in gold. The cartridge- or converter-filled fountain pen has an 18-karat gold nib inscribed with “Montegrappa” in hieroglyphs – a nice touch.

The pen cap and barrel of Visconti’s Tutankhamun feature a central band crafted from ivory-colored resin, which is decorated with hieroglyphs and other images from the pharaoh’s burial chamber. Using a time-consuming scrimshaw technique, the hand-filled engravings stand out from the off-white background, telling a story in the process. 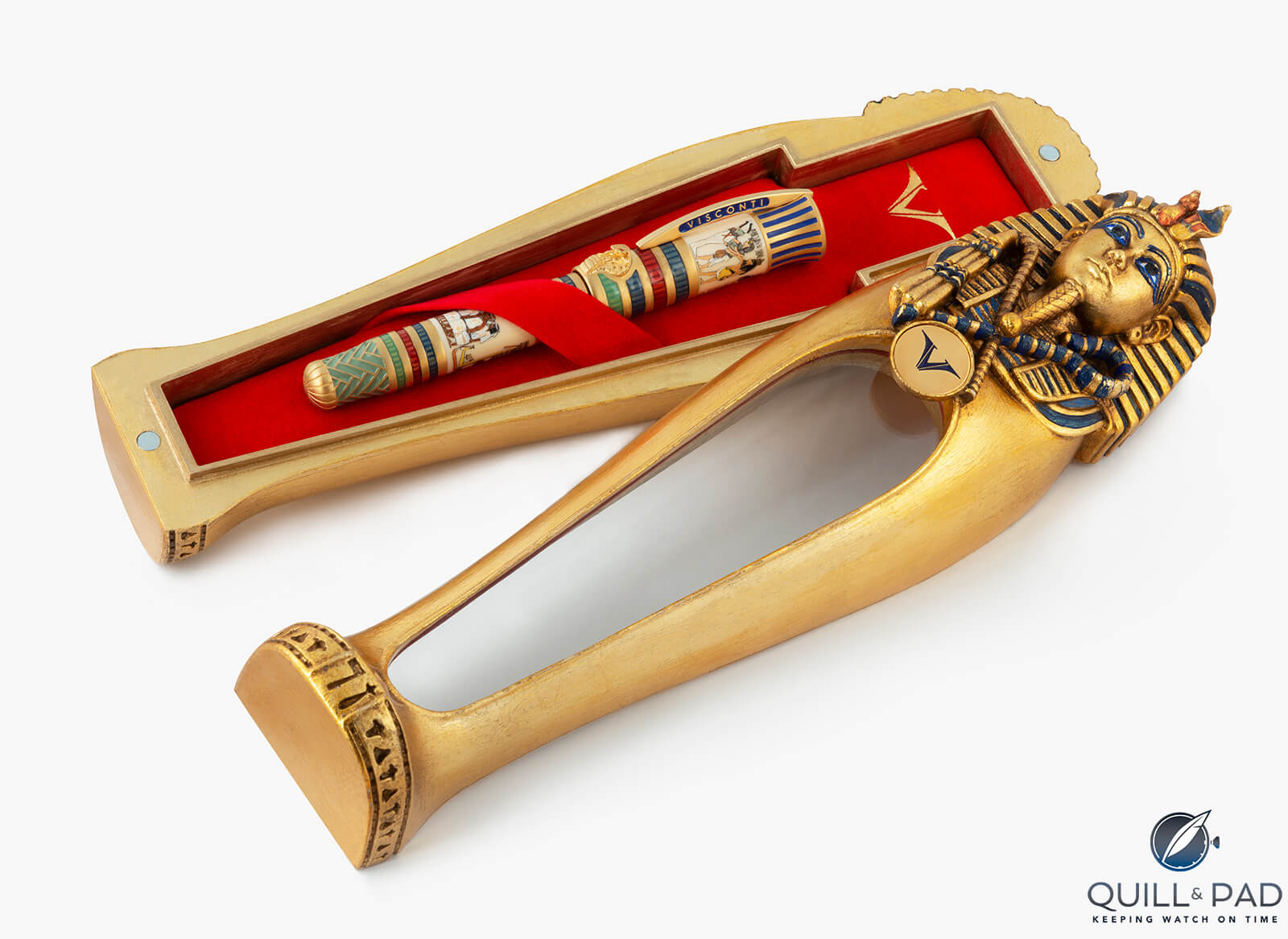 Blue, red, and green enamel stripes on the cap and barrel are designed to recall the pharaoh’s necklace, while a series of darker blue enameled stripes adorn the top of the pen cap, like the Nemes cloth (head cloth) covering Tutankhamun’s crown. A cobra is carved into the lower portion of the pen cap representing Tutankhamun’s rule of Lower Egypt. The pen’s trim is in yellow gold vermeil. 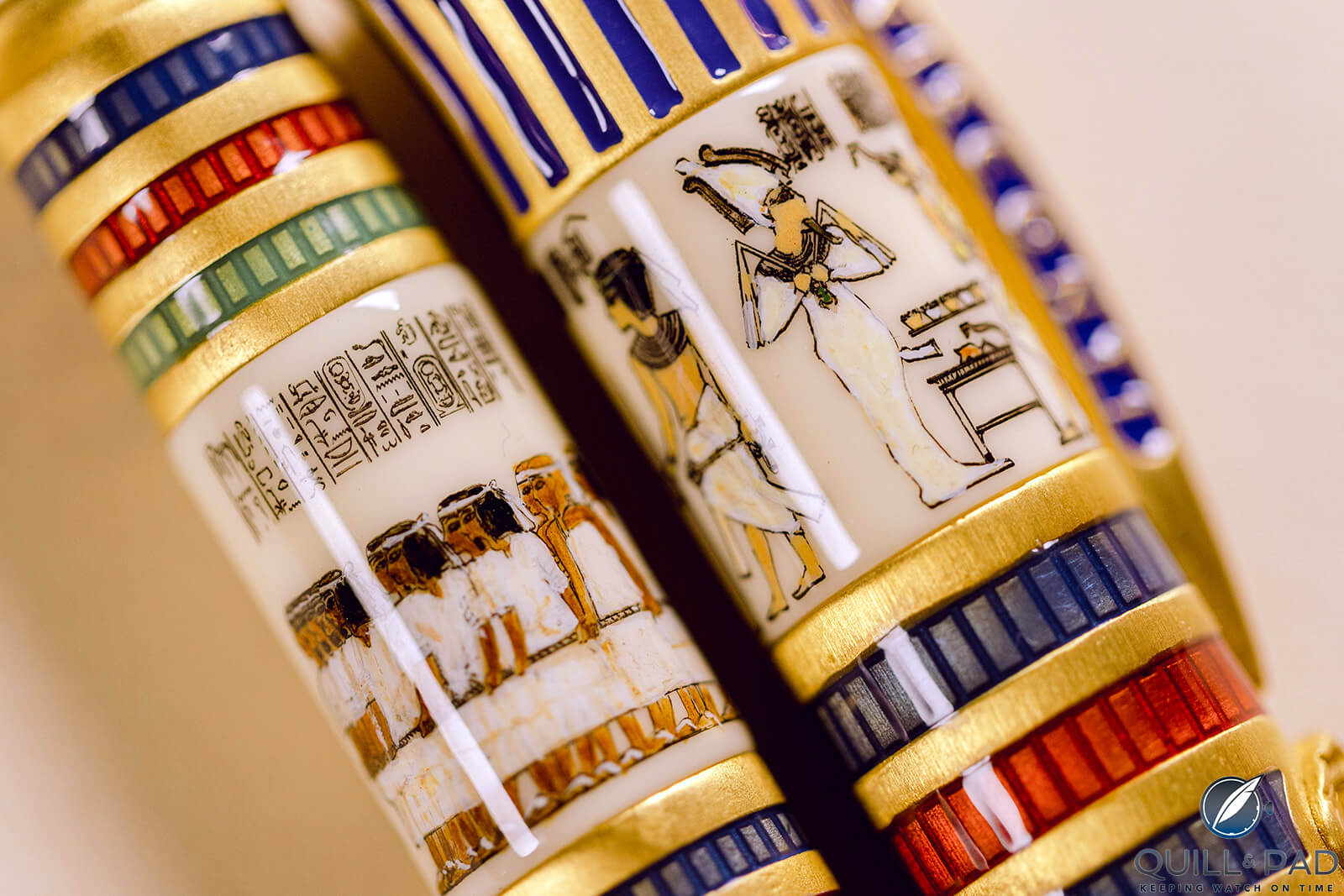 A rollerball is also available and it, like its fountain pen counterpart, has a threaded cap. Each pen rests inside a likeness of Tutankhamun’s gold coffin with the familiar death mask stealing the show.

Memo Luxor Oud: Not How The Ancient Egyptians Would Have Smelled