The apprentice was once a crucial part of almost every trade and industry; apprenticeship was the most common way for a person to learn a skill and then engage in a profession until it became more common to employ low-skilled workers in industrial positions. Most of them would forgo extended training and get straight to work. But the system lives on to this day – especially in Europe, where it has a long and venerated history.

Starting to be formalized in the fourteenth to sixteenth centuries, the idea of an apprenticeship is ages old. The concept generally saw a young person join a master craftsman or a craftsman’s guild to receive training and instruction in a specific skill, usually being provided food and housing during the apprenticeship. The apprentice would work beside the master craftsman, where as much expertise as possible would be shared with the young pupil, who would carry on the knowledge. Some of the oldest professions used this system for centuries: stonemasons, blacksmiths, goldsmiths, carpenters, bakers, shipbuilders, and tailors just to mention a few, and this is why we still have some very old knowledge, which was passed down from master to apprentice for hundreds of years.

With the industrial revolution we entered the modern industrial age in which a large portion of workers did not need to spend years learning skills as machines replaced physical labor. Apprenticeships fell from being the most common way for people to learn skills (though there was still a lot of on-the-job learning). 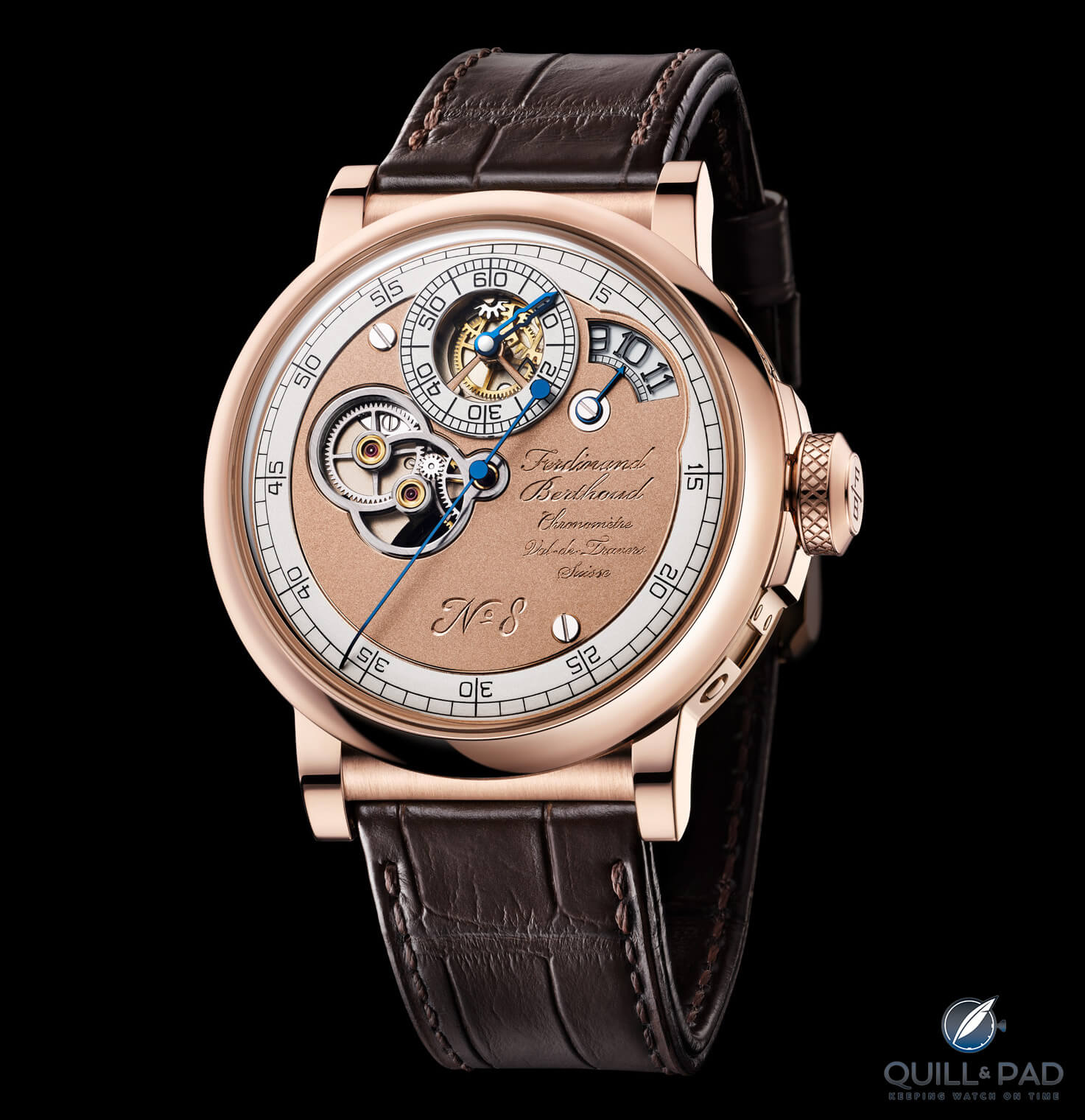 One brand that is happy to incorporate it into its organization is Ferdinand Berthoud. The brand’s most recent release, the FB 2RSM.2-1, is the culmination of the apprenticeship of a student at the University of Neuchâtel. And what a project it is.

It all began, as do most stories, a long time ago. And this time in the workshops of the man himself, Ferdinand Berthoud. Berthoud was known for his desire to pass on his knowledge, taking in his first apprentice shortly after he opened his first workshop and training him for eight years.

His second apprentice, Jacques-Vincent Martin, was his pupil the longest, working with Berthoud for 20 years. Berthoud also taught his nephew Pierre-Louis, a Spanish watchmaker by the name of Cayetano Sánchez, and another star watchmaker named Jean Martin. During Berthoud’s career he taught apprentices for decades, always ensuring that his knowledge and skills would be carried onward and outward.

That spirit of knowledge and education is what urged the brand to engage with a student to create the stunning new FB 2RSM.2-1. The model is a regulator-style deadbeat seconds watch sporting a constant force mechanism, tourbillon, and fusée-and-chain device all expertly applied to achieve chronometer certification via the C.O.S.C. (a feat that most marine chronometer-inspired watches with constant force mechanisms often lack). The watch also includes a stop-seconds mechanism to halt the tourbillon, a stop works on the fusée-and-chain device (a necessity to prevent damage to the chain), and a small power reserve indication on the rear.

But why, exactly, is this the project that the brand decided to work on with a student? The answer once again goes back to Ferdinand Berthoud the man. In 1766, Berthoud’s second apprentice, Jacques-Vincent Martin, began working with him and over the next two years he supported the efforts of the master as Berthoud created his famous Marine Clock No. 8, known as the H.M.8 (and, yes, I am giving MB&F founder Max Büsser a knowing glance when I see that the more things change the more they stay the same). The H.M.8 then went to sea for two years, where it was tested and found to be incredibly accurate and very useful for the task of precise navigation.

As a result of this success building upon earlier accomplishments, the H.M.8 cemented Berthoud as the preeminent horologer of the time, earning him a royal appointment as Horloger mécanicien du Roi et de la Marine or the “Watchmaker-Mechanic by appointment to the King and Navy” by Louis XV. The Marine Clock No. 8 is therefore a crucial achievement for Ferdinand Berthoud, and it was supported by his talented apprentice.

Using that history to inform the present, it only makes sense that the FB 2RSM.2-1 would be the modern spiritual successor to the H.M.8 and be built with the contributions of a modern apprentice. 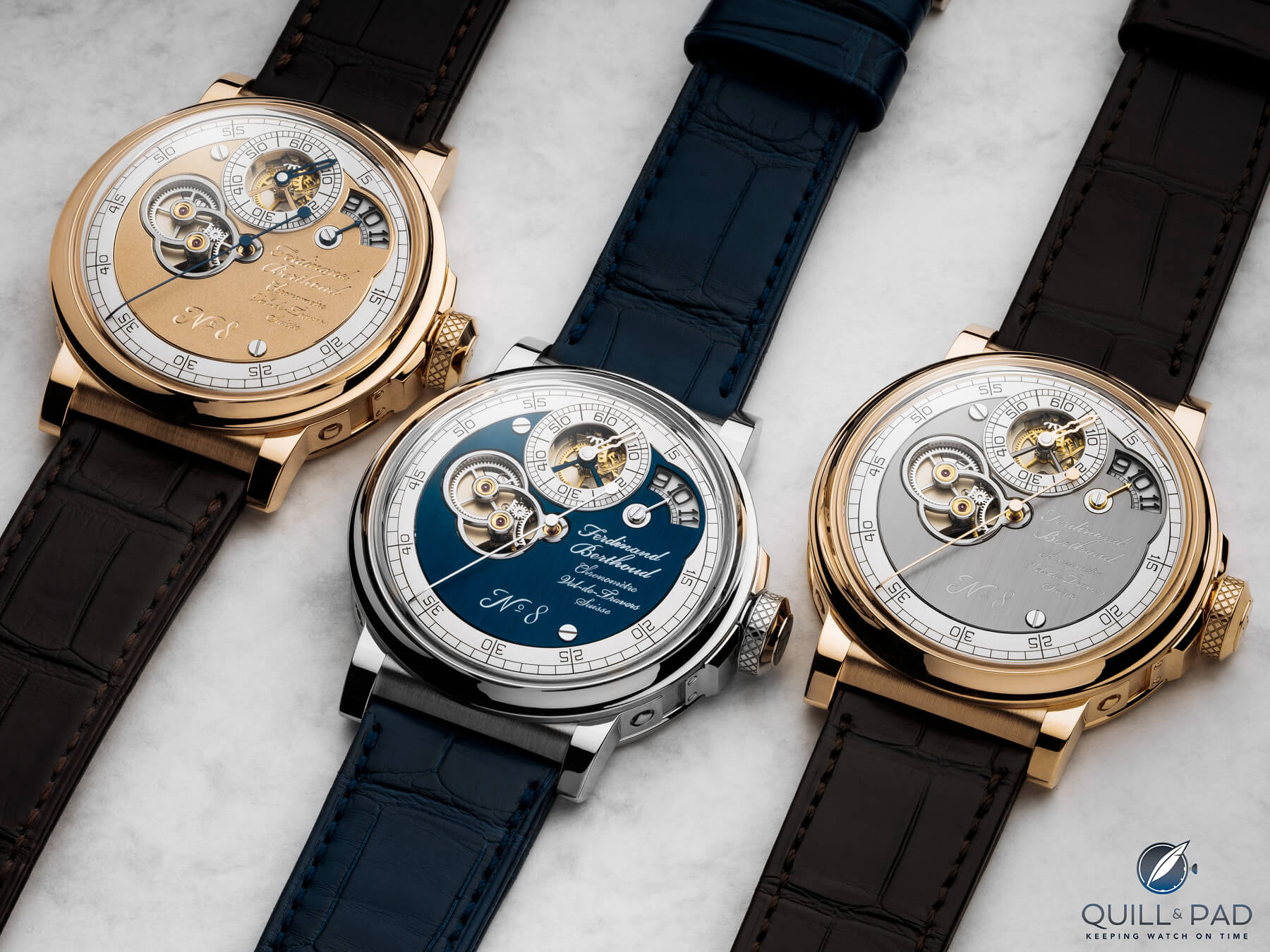 Ferdinand Berthoud FB 2RSM.2-1 in a trio of dial colors

While the student isn’t exactly the same as a historical apprentice, the co-op structure that students in many industries participate in to get hands-on training (with pay and sometimes housing provided) is one of the modern forms of apprenticeship that fits in the world of universities and capitalism. Turning what would have been an entire lifestyle in centuries past into a job opportunity is a perfect way for skilled and creative people to work with companies they might hope to work for after graduation.

In this case, the development was specifically for a graduation project and was not limited to just watchmaking but also included historical research of deadbeat seconds clocks, relevant patent investigation, and a full understanding of the original Marine Clock No. 8, all leading to the development of the seconde morte complication implemented in the Tourbillon Régulateur à Force Constante caliber. 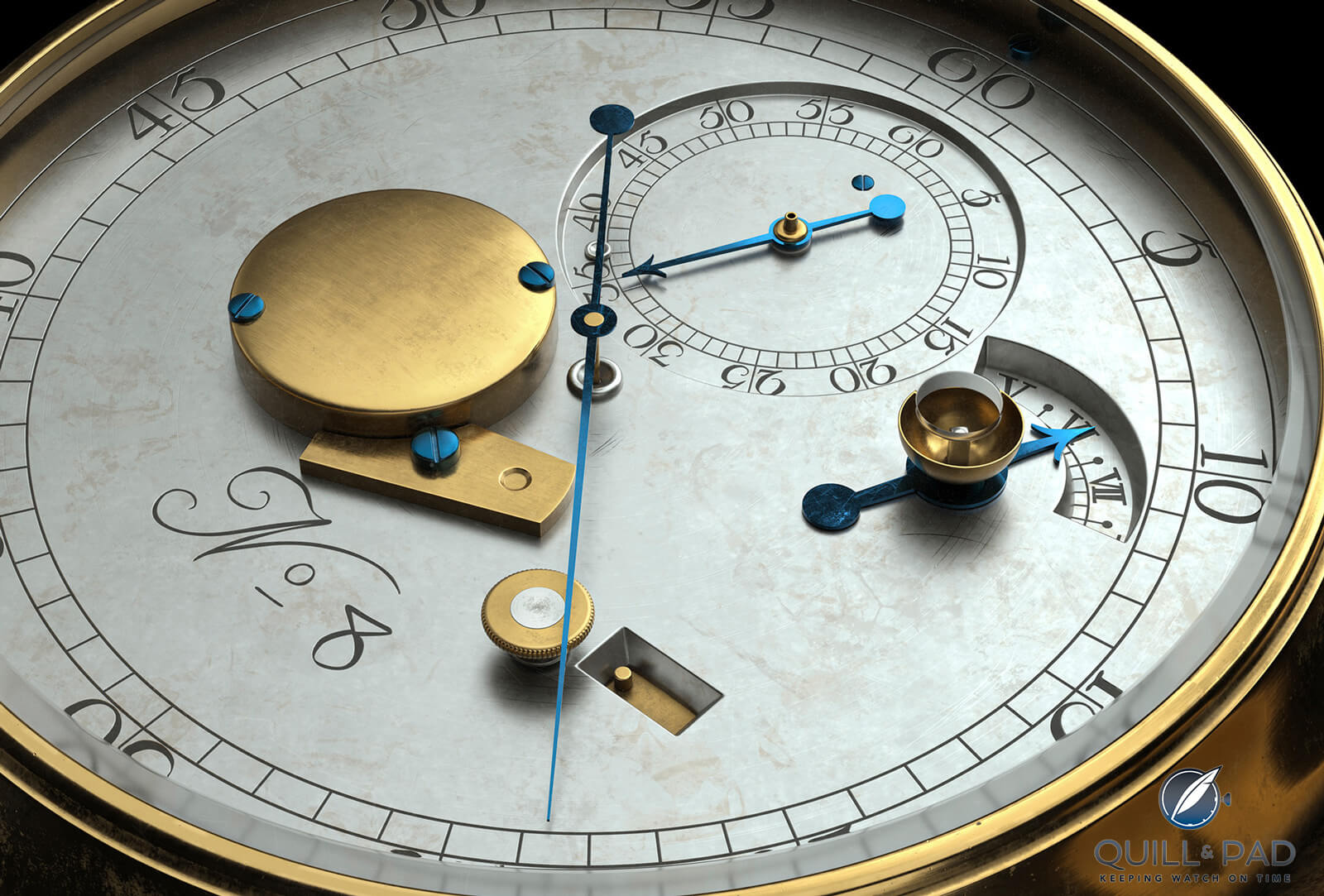 The result speaks for itself, following in the footsteps of the original clock while mixing the aesthetics of the H.M.8 and the modern Ferdinand Berthoud brand. The regulator layout is perfectly maintained in relation to the entire dial, and the design of the dials matches the historical clock.

The Arabic numerals have been updated to the modern typography typical of Ferdinand Berthoud since the FB 1. This is most evident with the hours, which originally were classic Roman numerals while now they are rather bold Arabic numerals applied to a sapphire crystal disk that appear to float above the silver dial underneath.

Originally, the Marine Clock No. 8 had a variety of other movement-related components attached to its dial as well as a window with a small lever, but none provided any extra information and they closed off the mechanics of the clock. Unlike the standard practice of the eighteenth century, modern Ferdinand Berthoud likes to go the opposite way and showcase what is actually making the watch function. The minute “dial” is hollowed out in the center, providing a window into the going train and giving a peek at the sapphire crystal hour disk as it rotates over the wheels in the opening. 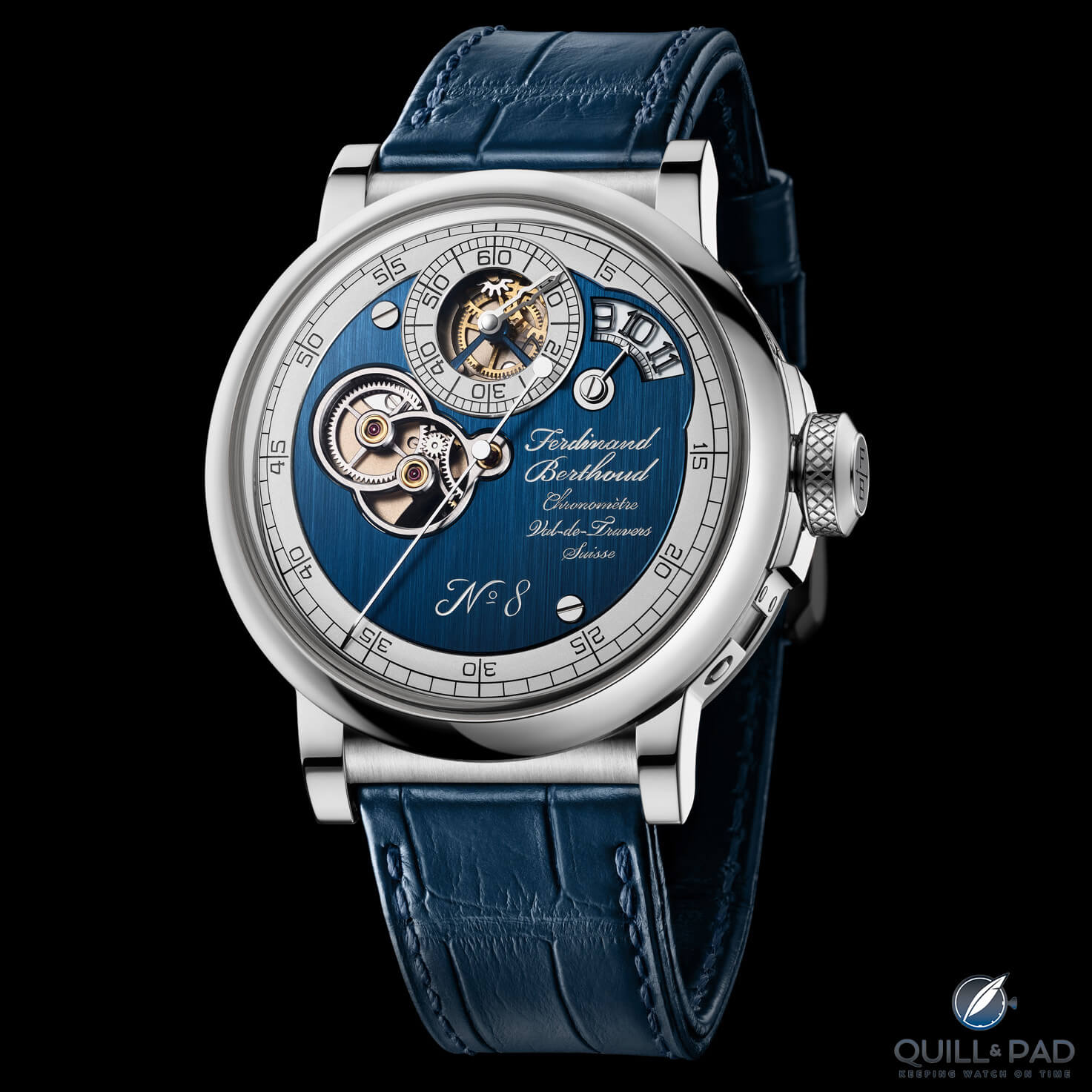 One of the largest aesthetic changes is the addition of the overlapping windows that expose the deadbeat seconds mechanism to display the work of the student apprentice. Previously a large round cover that likely hid the original deadbeat seconds mechanism on the clock, on the watch it thematically fits in a similar spot with a unique shape. The two wheels in the window are each supported by a jewel bearing in a gold chaton, and the window border doubles as the bridge structure, cantilevering out from the edge in a quasi-ying-yang symbol.

While that detail is entirely unnecessary, it is also such a simple way to show some creativity in design for a very technical watch. Given that this piece is one of the few models that strays from the brand’s differentiating octagonal case and in lieu of the round case, the aesthetic is going to be more on the conservative overall. But the choice of details doesn’t make it feel that way, it just feels fun and technically impressive. And that is all before you turn the watch over. 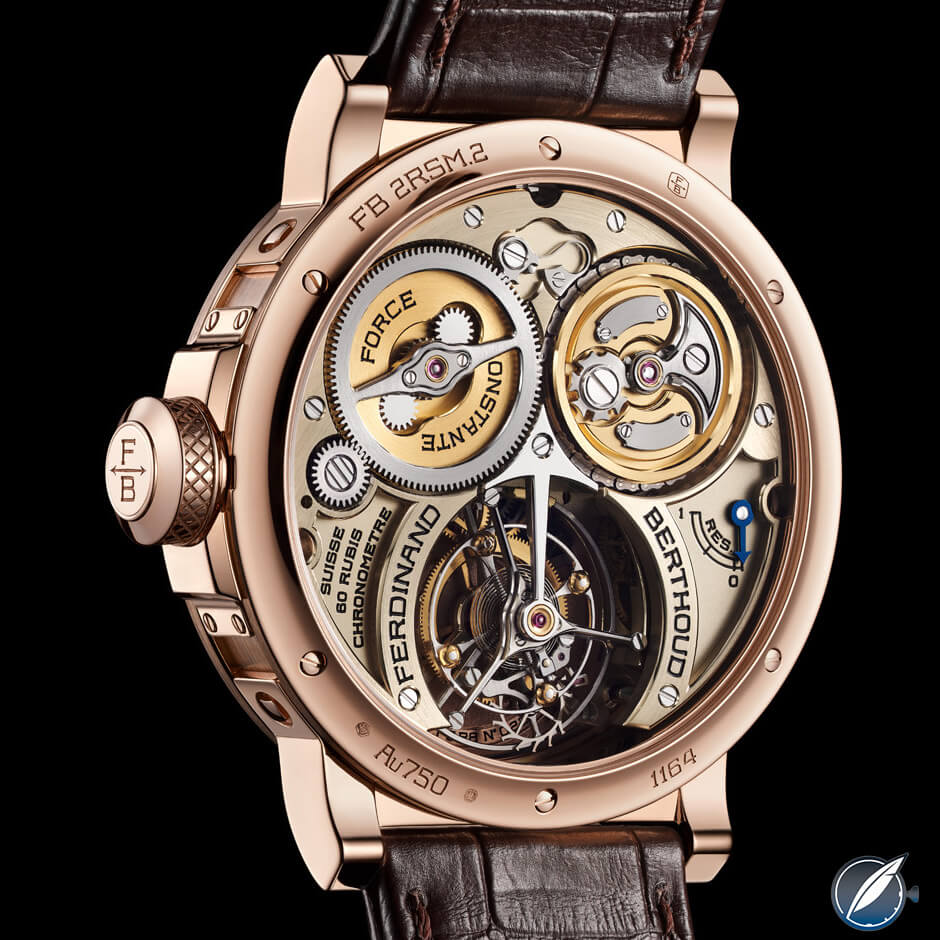 Caliber FB-T-FC. RSM, a new iteration of the base Tourbillon Régulateur à Force Constante caliber, is mouthwatering. Not that there has been a movement from Ferdinand Berthoud that failed to blow me away, but it’s movements like these that remind me just how impressive the brand is. Movements like what is in the FB 2RSM.2-1 are not widely present in the watch industry as a whole, and even if it has some limited company, much of my time will always be spent just staring at the movement trying to understand its mechanical secrets. In this case the secrets are even on display, adding up to a movement that was able to achieve C.O.S.C. chronometer certification.

As a rule of thumb, creating chronometer movements is not an especially difficult thing engineering wise, it often just comes down to the effort spent on regulation by a trained watchmaker. Movements can be made fairly accurate quickly with a few adjustments while on a timing machine. That is the result of good quality control that comes at every stage of manufacturing, and much of that is standardized. But to get a movement very accurate and consistent to meet C.O.S.C. standards, that requires much more fiddling to really dial in all the positional errors and adjustments that can affect the rate over time.

In movements like Caliber FB-T-FC. RSM, which has multiple mechanisms designed to improve rate consistency, power delivery, and positional errors, most brands won’t actually spend the time to ensure they meet the hypothetical accuracy these mechanisms supposedly provide. If I had a dollar for every time a watch included a mechanism to improve its consistency yet there was no rate information available anywhere, I would have tens of dollars. That might not sound like a lot but it’s enough that anyone familiar with these things would agree that just because a watch claims it sports a movement that is more precise you have every reason to assume it is probably not much more precise than a well-adjusted ETA movement. 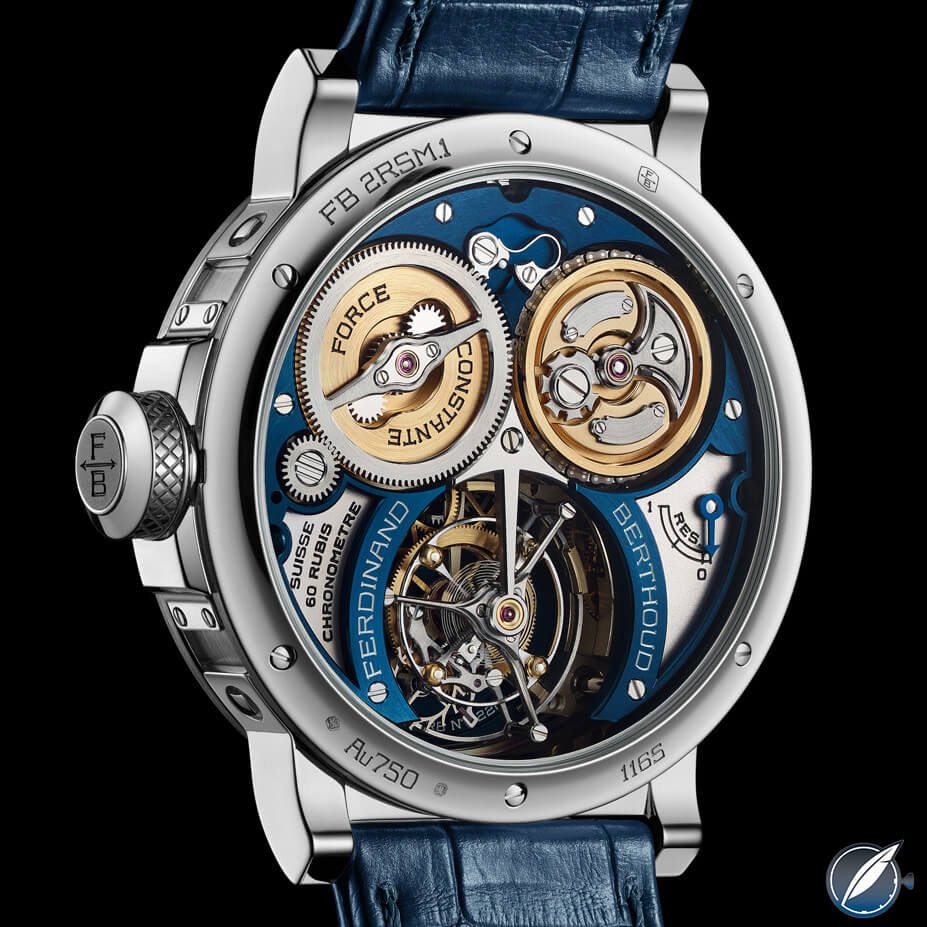 But not so with the Ferdinand Berthoud FB 2RSM.2-1: the brand didn’t want to just talk the talk without making sure the watch could at least hit the basics of C.O.S.C. certification. That certification isn’t saying the watch is the pinnacle of accuracy, but it is confidently bearing witness to solid engineering, design, and regulation. I think we can all appreciate when a brand puts that much effort into an incredible movement and then follows up to make sure it works as well as it looks.

That is what Ferdinand Berthoud is all about: incredible watches made to fantastic specifications that would make the founder and namesake proud. If you are a movement or mechanics nerd, this piece has enough engineering to keep you captivated. And if you love history then the fact that the brand is built around honoring watchmaking history in truly tangible ways is bound to curry favor. I’ve found multiple reasons to keep championing Ferdinand Berthoud, and the FB 2RSM.2-1 is more ammunition for my cheers. 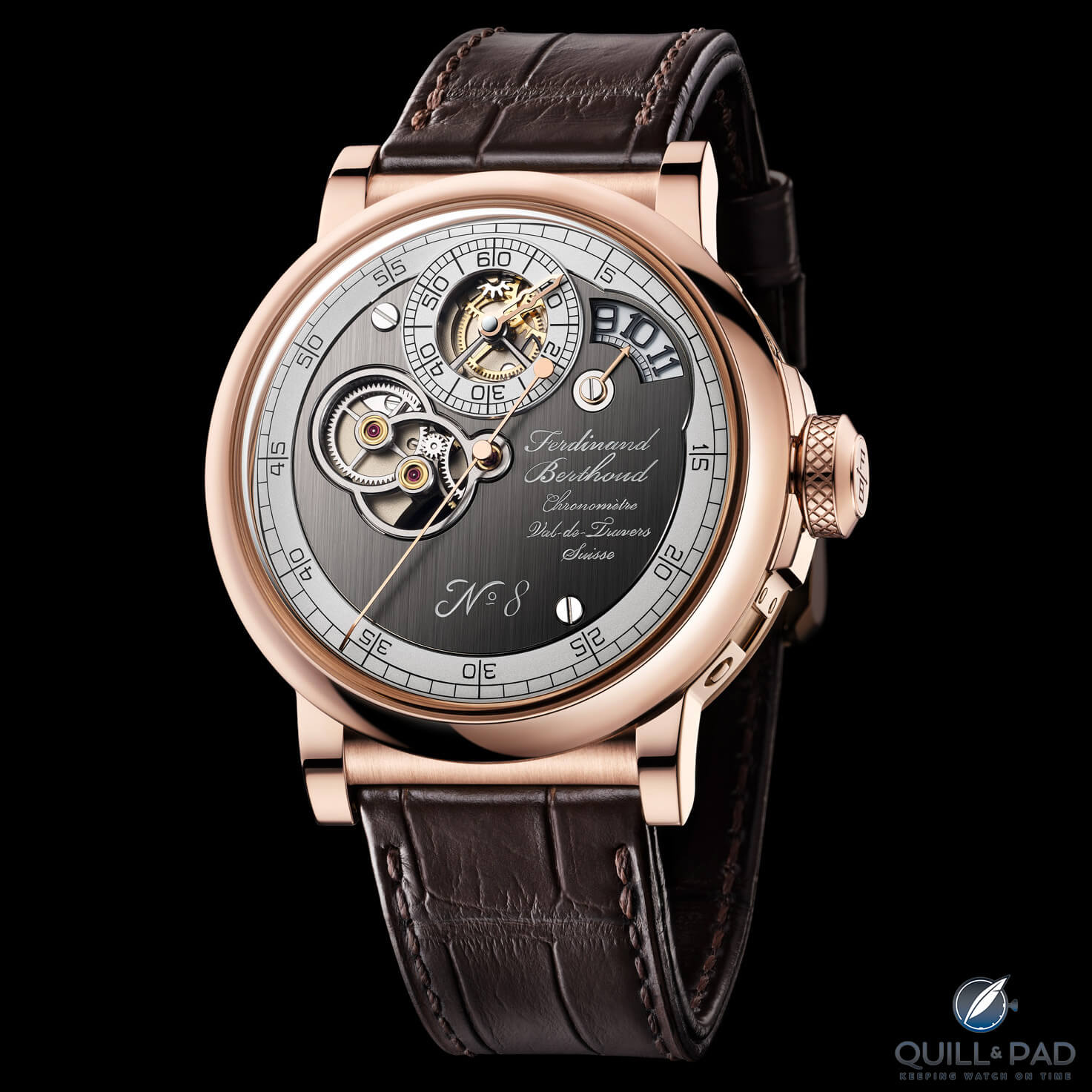 So with all that mechanical awesomeness, I still have to break it down!

Who Was Ferdinand Berthoud And Why Should We Care?

Ferdinand Berthoud Chronomètre FB 2RE: Change Is Round

Ferdinand Berthoud FB 1L: When History Has A Date With Progress