It’s almost that time again! In just about two months, the watch community will gather in Geneva on November 10 for the 2022 edition of the Grand Prix d’Horlogerie de Genève (GPHG), also known familiarly as the “Oscars of Watchmaking.”

As a former GPHG juror and a current member of its Academy, I have the opportunity each year both to suggest deserving watches for consideration and to participate in the initial round of voting to narrow the long list of entries down to six finalists in each of 15 categories.

That round of polling recently finished, and the finalists (“nominated” watches) have been announced, but before we move on I thought I’d give a shoutout to several of the entries I felt were of merit or interest. I suspect that some, but not all, of them will be my “winner” picks in their respective categories when we conduct our annual round table discussions here, and two of them didn’t even make the cut for the final six in their category. But as usual I reserve the right to change my mind!

I’ll leave the debate on whether there should be such a thing as “men’s” and “ladies” watches for another day, but this year Hermès has finessed the question by nominating two slightly different versions of the same watch, its Arceau Le Temps Voyageur, in the two Complications categories. 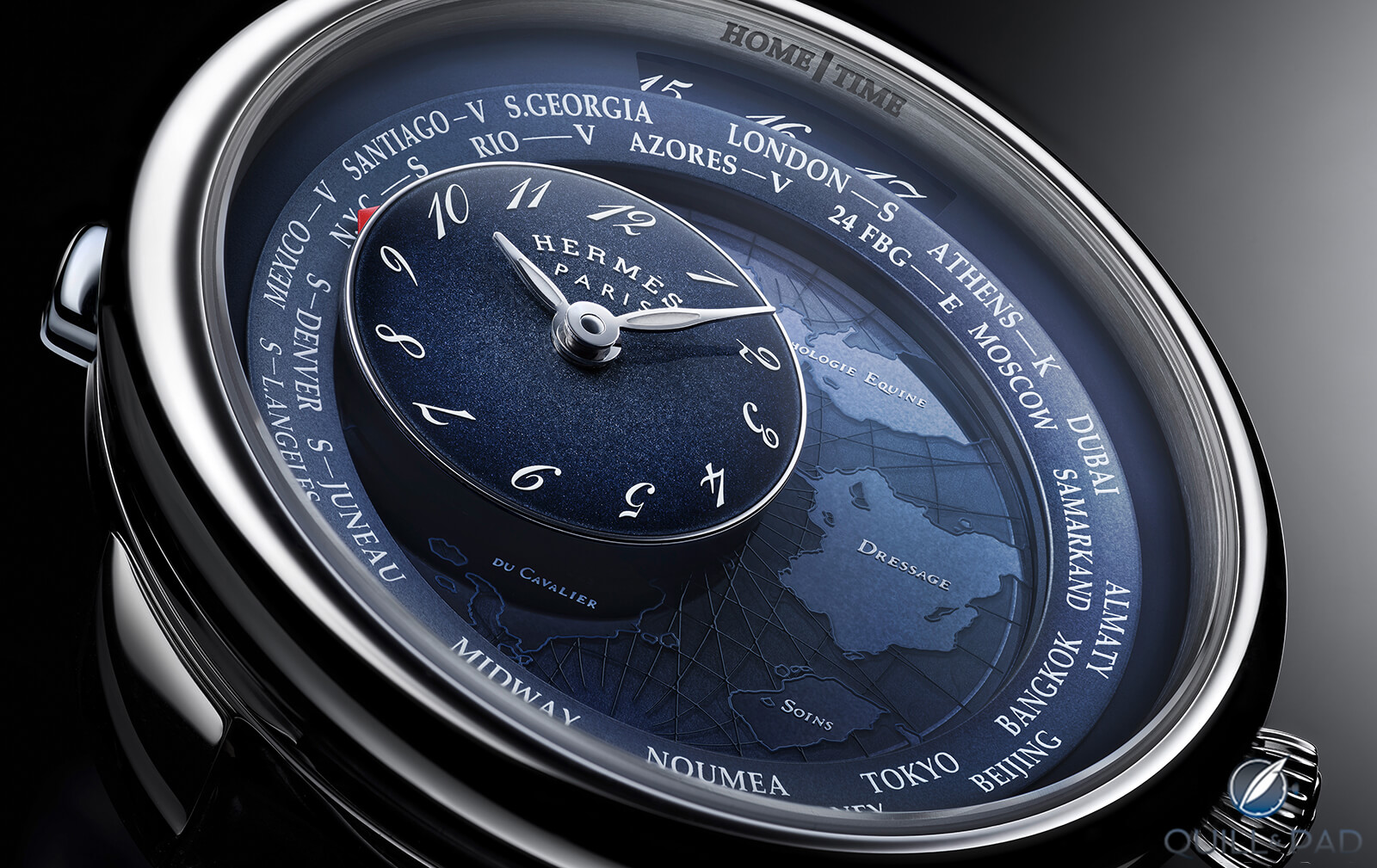 The Ladies Complication nominee is in a 38 mm steel case with blue dial, and the Men’s in a 41 mm titanium case with black dial, but both feature the same clever complication: a local time subdial that travels around the perimeter of the watch as it points to the time in any of the cities displayed on the outer chapter ring.

Home time is visible through an aperture at the top of the dial side; and in the background behind the local time disk, we see a fanciful map of the world with land masses labeled with equestrian designations. As a dressage rider myself, how could I possibly resist a watch with an entire continent labeled “Dressage?”

One other thing that I particularly like about this watch: its family resemblance to 2019’s Arceau L’Heure de la Lune, whose traveling carousel with the time on one end and date on the other slowly covers and uncovers two moons in the background as it crawls around the dial each 29.5 days, with its own fanciful horse-related art in the form of a rendering of Pegasus replacing the true cratered image on one of the moon disks.

Is there anything as predictable as someone picking out the Chronomètre Contemporain II by Rexhep Rexhepi’s Atelier Akrivia as a watch to praise in the Men’s category? Well, for those of you with short memories I’ll just remind you that the year before its predecessor, the RRCC 01, stormed to the Men’s category win at the 2018 Grand Prix d’Horlogerie de Genève, Rexhepi’s entry in the Grand Prix didn’t even make the final six in its class. 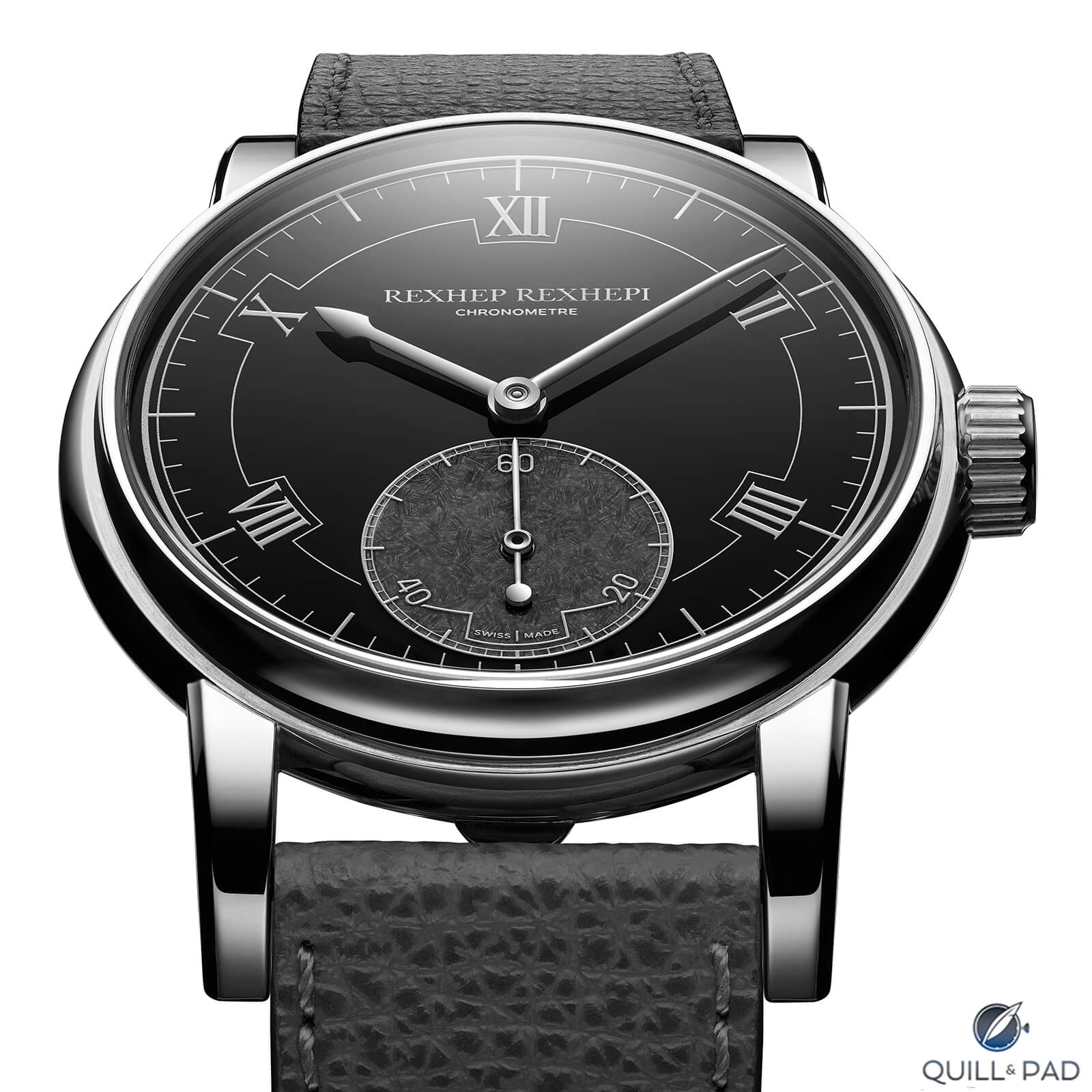 There’s little risk of that this year, however! As a proud owner of the RRCC 01, I’m not eligible to buy the RRCC 02, but it’s safe to say that I’d buy one if I were able. Rexhepi has retained his trademark use of symmetry in movement design, created dials that look to be as good as those on the first series and better than the dial on the RRCC 02 Only Watch, added a deadbeat seconds complication on top of the prior zero-reset seconds, and packaged it all in gorgeous new cases by maestro Jean-Pierre Hagmann. What’s not to like?

While the RRCC will attract lots of deserved attention, I’ll also point to another handmade piece in this category: the Old School by Massena Lab and Luca Soprana. 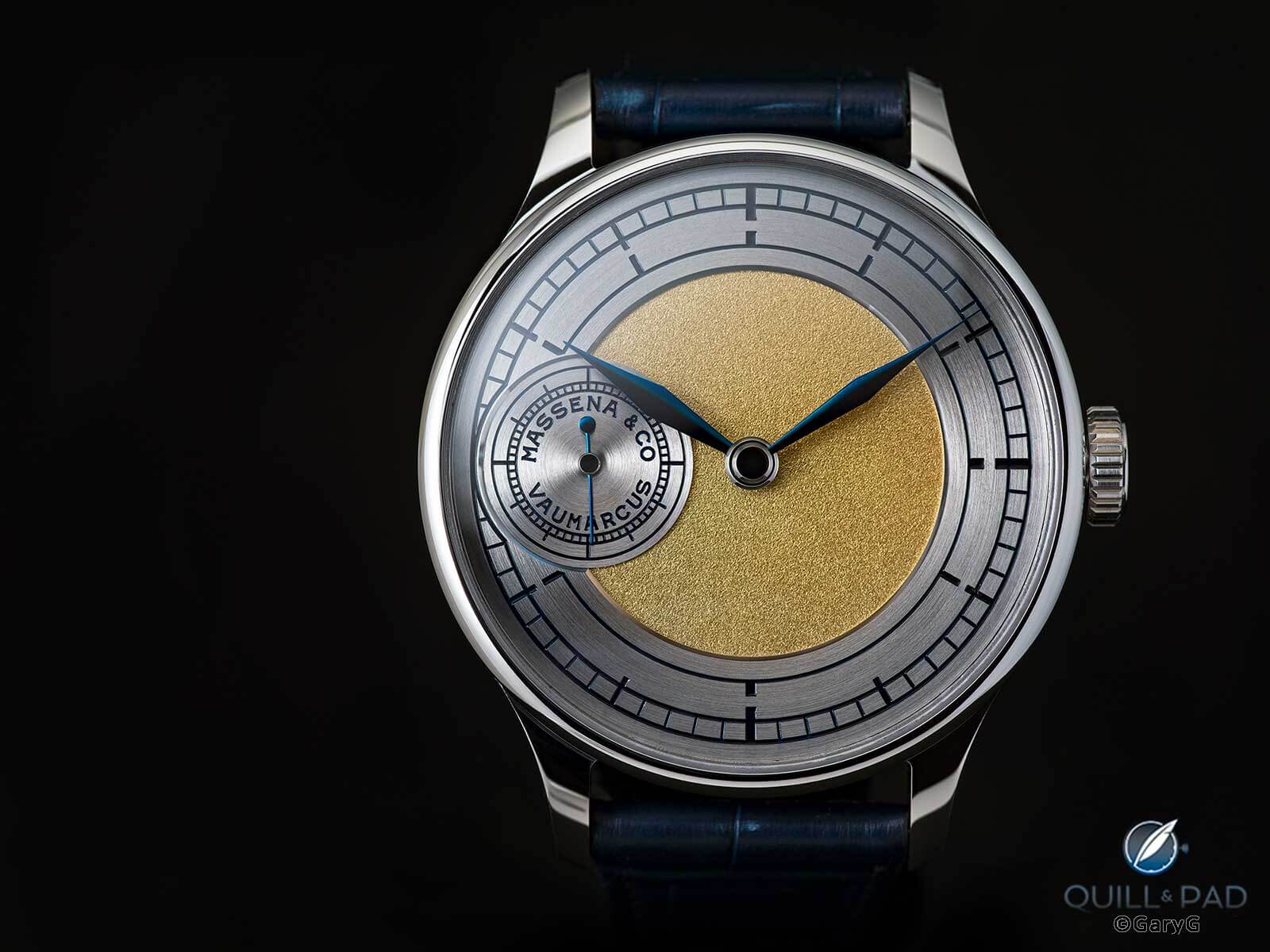 I’ve photographed and written about this watch on Quill & Pad and hope you will click on the link to see why I’m so high on this piece. Soprana is a treasure in the watch field who has been the behind-the-curtain designer and maker of a variety of pieces you know well. William Massena is a love-him-or-hate-him guy (I’m in the former camp) with strong views on watches and the watch business, an encyclopedic knowledge of watch history, and in my opinion an unerring eye for what looks good.

Sadly, the Old School didn’t make the GPHG lists of finalists, nor did my third notable Men’s watch, a piece that I tried to buy but that was sold out before I could hit “send” on my email: the Minions watch by Konstantin Chaykin. To know me is to know that I love the Minions, and this 40 mm ode to sheer fun would have been the ideal follow-up to my earlier purchase of Chaykin’s original 2017 Joker.

You can’t have them all, though! I remain envious of the folks who are getting these pieces, even including the one who paid on the order of three times the retail price for one at auction as I was composing this article. 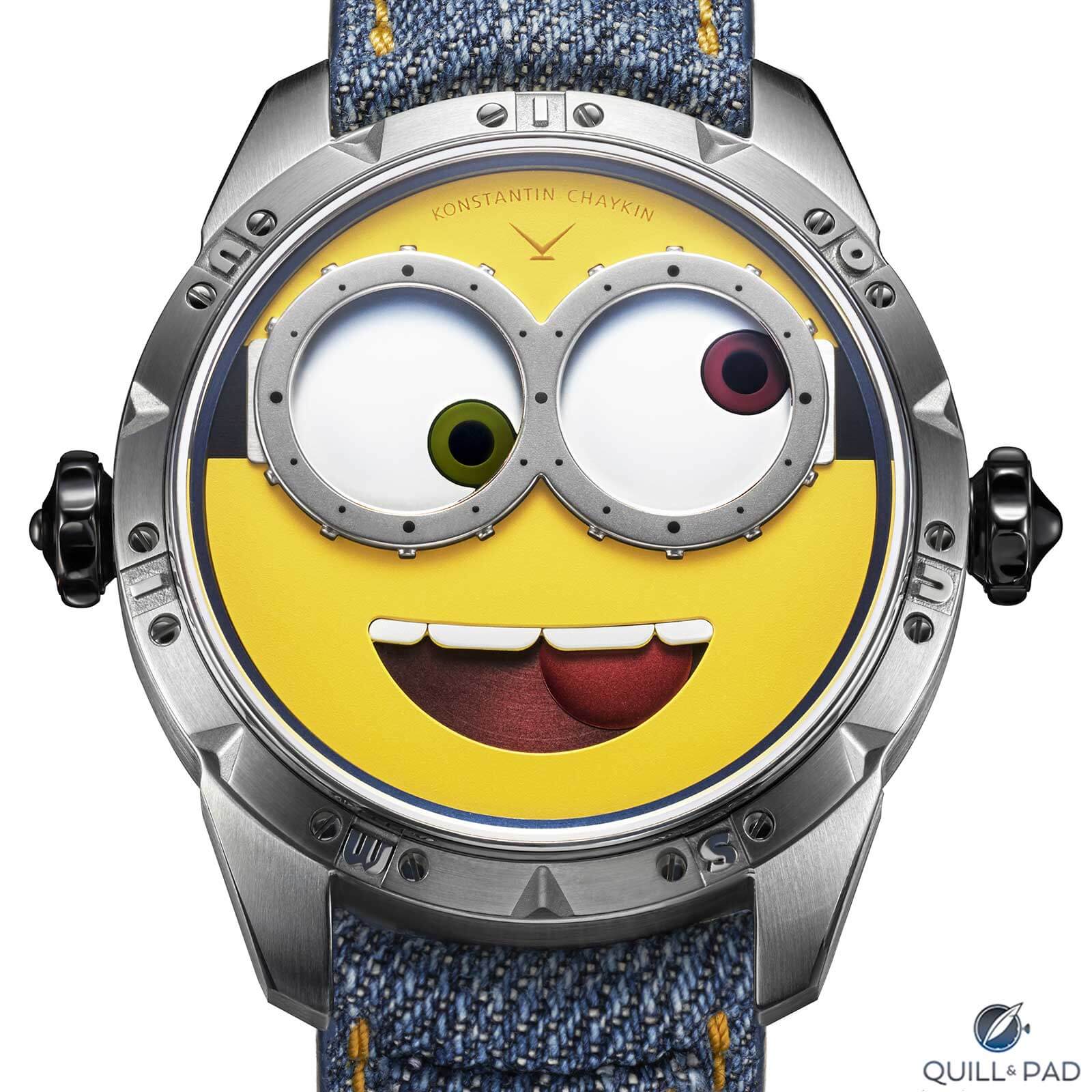 As a former juror of the Grand Prix, I can attest that there’s no category in which it’s more important to handle the watches prior to rendering judgment than Artistic Crafts. Something that looks blah in a photo can leap to life in person, and watches that look more than appealing in rendered images can turn out (and have in at least one instance in my personal experience) to be horrifying in the metal.

If there’s one safe bet, it’s that Kari Voutilainen’s collaborations with Japanese master artists will not disappoint. And this year’s Ji-Ku, created with Japanese lacquer artist Tatsuo Kitamura, seems no exception.

The watch itself is a unique worldtimer commissioned by a Voutilainen client, making it notable in its own right. The dial’s central section, a lacquer work incorporating gold dust, gold leaf, and two varieties of aquatic shell, dazzles with its colors and depth. For whimsy, while the watch does not carry the Voutilainen name on its face it does utilize the watchmaker’s residence, Môtiers, as the worldtimer city for its time zone. 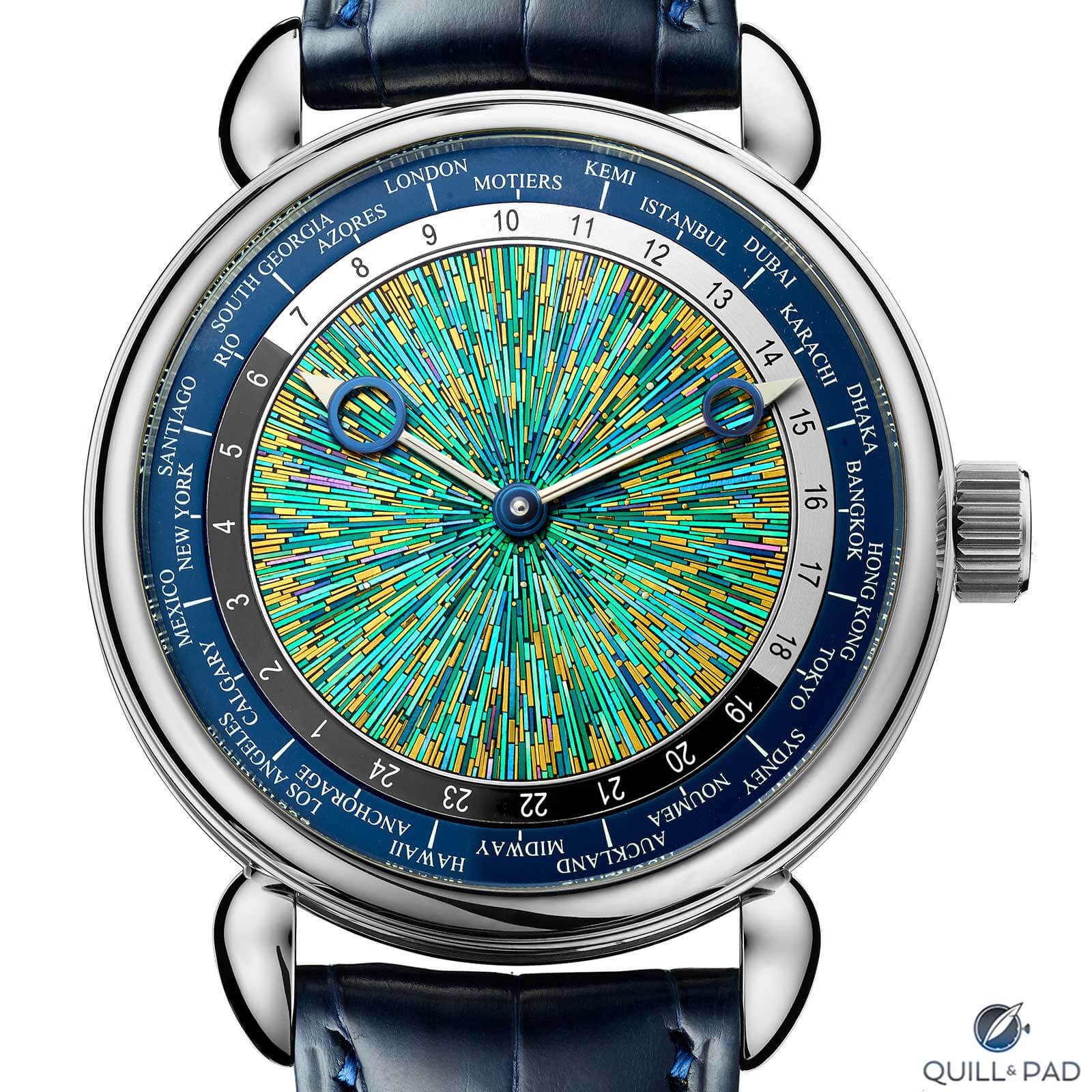 Not mentioned in the materials on display on the GPHG website, but clearly visible to anyone who takes a careful look at the included photo of the rear of the watch, is another compelling feature: the use of Voutilainen’s new foundation movement, which retains the double direct impulse escapement design of the Caliber 28 variants in a slimmer package, and with a single-sided balance cock that makes it more appealing to my eye than its predecessor. 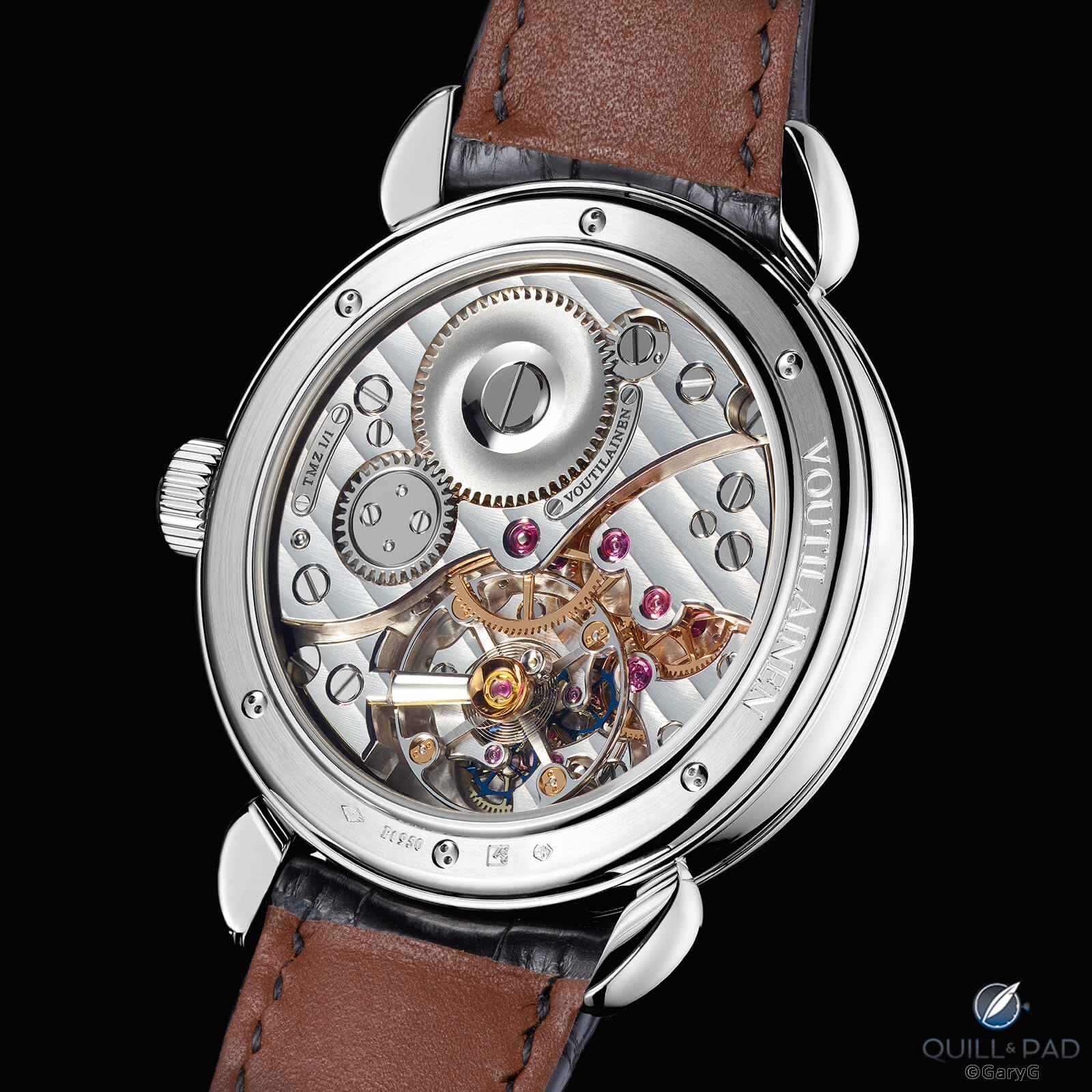 I was going to start my comments on the Chronographs with the Grönefeld Grönegraf, but my colleague Ian Skellern has done such a thorough job explaining why you should love this watch that I don’t need to belabor it! I will only mention that the use of a repeater-style regulator to smooth and slow the return of the chronograph hands to zero is a delightful touch as I’m a fan of majestically slow returns as with the Voutilainen retrograde calendar that uses a different mechanism on its retrograde date.

So, I’m left (boo hoo) with the stunning MB&F Legacy Machine Sequential Evo! I had a chance to handle (but not photograph) one earlier this year in Geneva, and I can tell you that it’s fantastic. 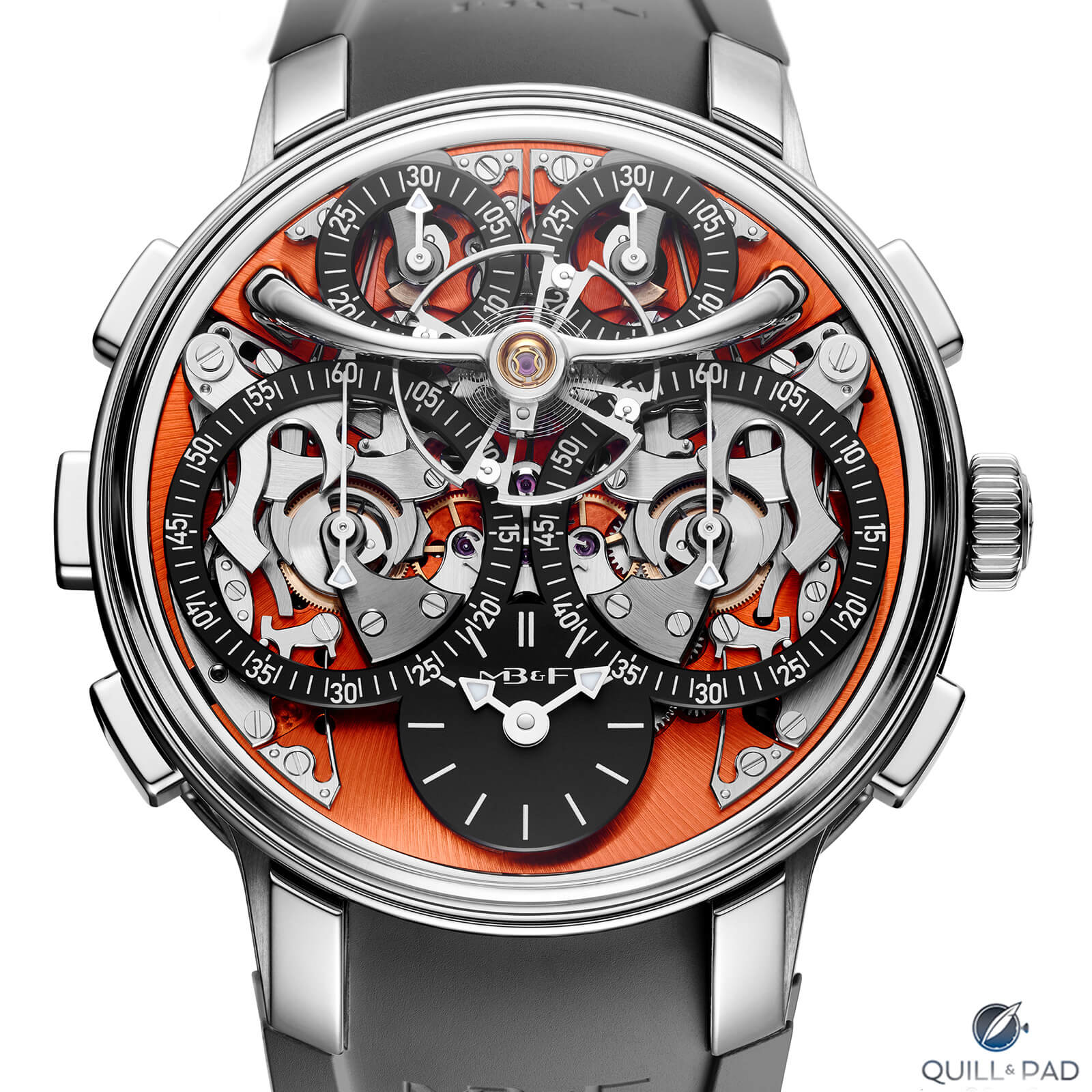 Other constructors might be able to design such a movement, and other makers might sell a watch that looks this daring, but it seems that only the combination of movement designer Stephen McDonnell and MB&F founder Max Büsser can give us timepieces that meld the two: first with the aesthetically similar but functionally quite different LM Perpetual and now with this Evo-styled chronograph.

It’s a rattrapante but then again with its side-by-side, independently actuated twin chronographs sort of not. It reminds me most of the twin- or triple-stop watch rigs on clipboards used in days of yore to time auto racing. But then again those were pure lap timers; and if you’ve played chess you know what a chess clock does – this watch does that too.

Basically, there’s no way of describing the damn thing. And I love it!

The feature that makes it all hang together is what MB&F call a “Twinverter” binary switch that in its simplest explanation makes both chronographs do the exact opposite of what they were doing just before the button was pushed. I prefer to call it the “upside down” button for that reason: it makes the moving still, and the stationary active. Or, as in the old joke, it’s like humankind’s greatest invention, the Thermos: it keeps hot things hot and cold things cold. How does it know?

Has anyone else noticed that Chopard has consistently been introducing fantastic timepieces? The brand’s relatively simple jump hour piece was my choice for 2021’s GPHG top prize, the Aiguille d’Or, and the brand has entered two crackers in this year’s Mechanical Exception category: the L.U.C. Full Strike Tourbillon and subsidiary brand Ferdinand Berthoud’s FB 2RSM.2-1 (note to reference naming team: that doesn’t exactly roll off the tongue . . . ). 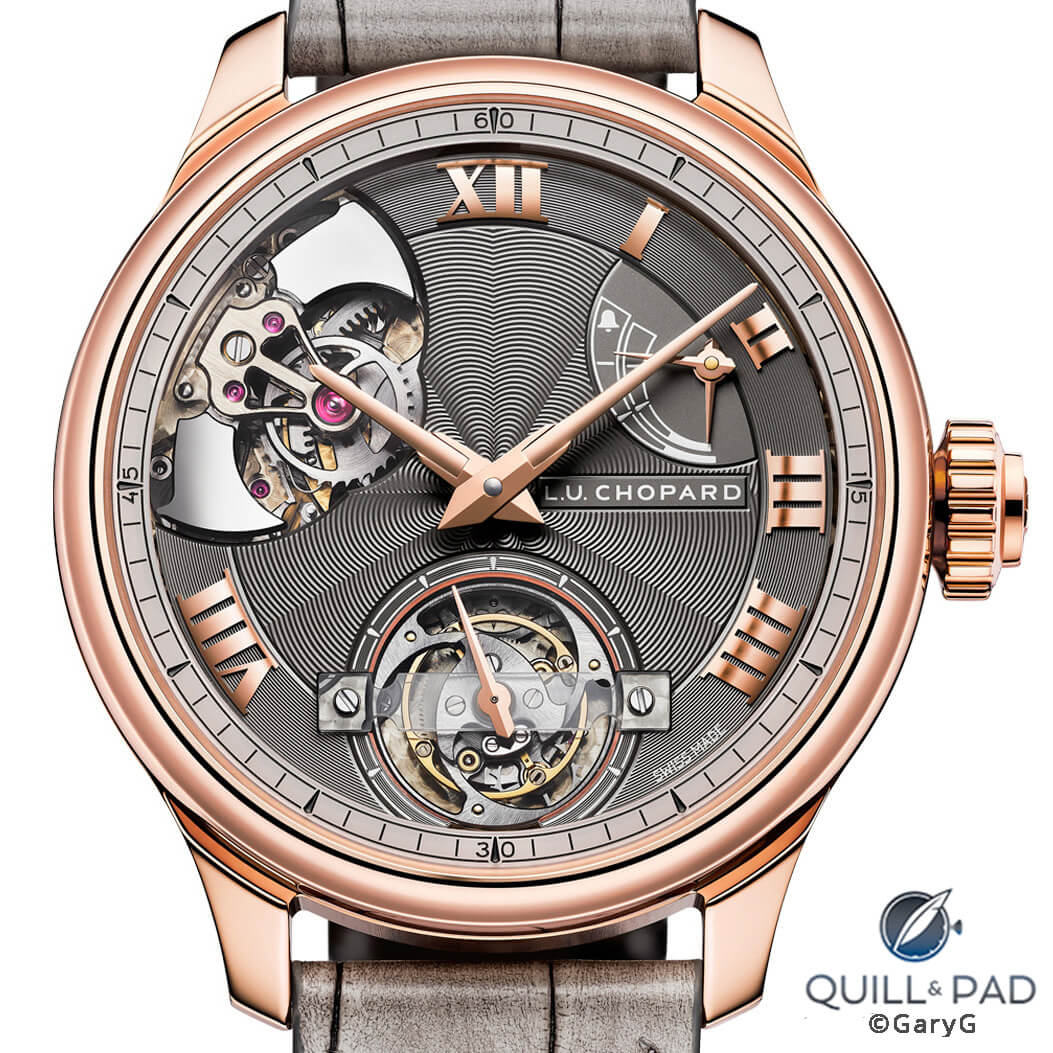 I was rather hoping that Chopard would choose to enter the L.U.C Full Strike Sapphire in this category, as to my ear it sounded even more brilliant than the original Aiguille d’Or-winning Full Strike, and to the eye it is beyond reproach. But perhaps Chopard felt either that it was too similar to the prior winner or chose to up the ante with this watch that adds a crystal-bridge tourbillon to the sapphire crystal gong minute repeater of the original.

I didn’t have an opportunity to handle the Full Strike Tourbillon at Watches and Wonders 2022, but a watch I did see in person was the Ferdinand Berthoud FB 2RSM.2-1.

The 2RSM.2-1 adds independent deadbeat seconds and stop seconds complications to the fusée-and-chain tourbillon regulator; the added complications were developed with a young apprentice watchmaker, a fact that makes my summer jobs as a youth look pretty weak. The overall design was inspired by Mr. Berthoud’s original H.M.8 marine clock from 1768, which was on display at the Berthoud booth at Watches and Wonders 2022.

Only 20 movements of this design will be made, and each will be fitted into a bespoke presentation of case and dial colors chosen by the buyer. The example entered into GPHG by the brand features a red gold case and black rhodium-treated dial; when our group saw several of the watches, I was particularly drawn to the white gold piece with blue dial shown below. 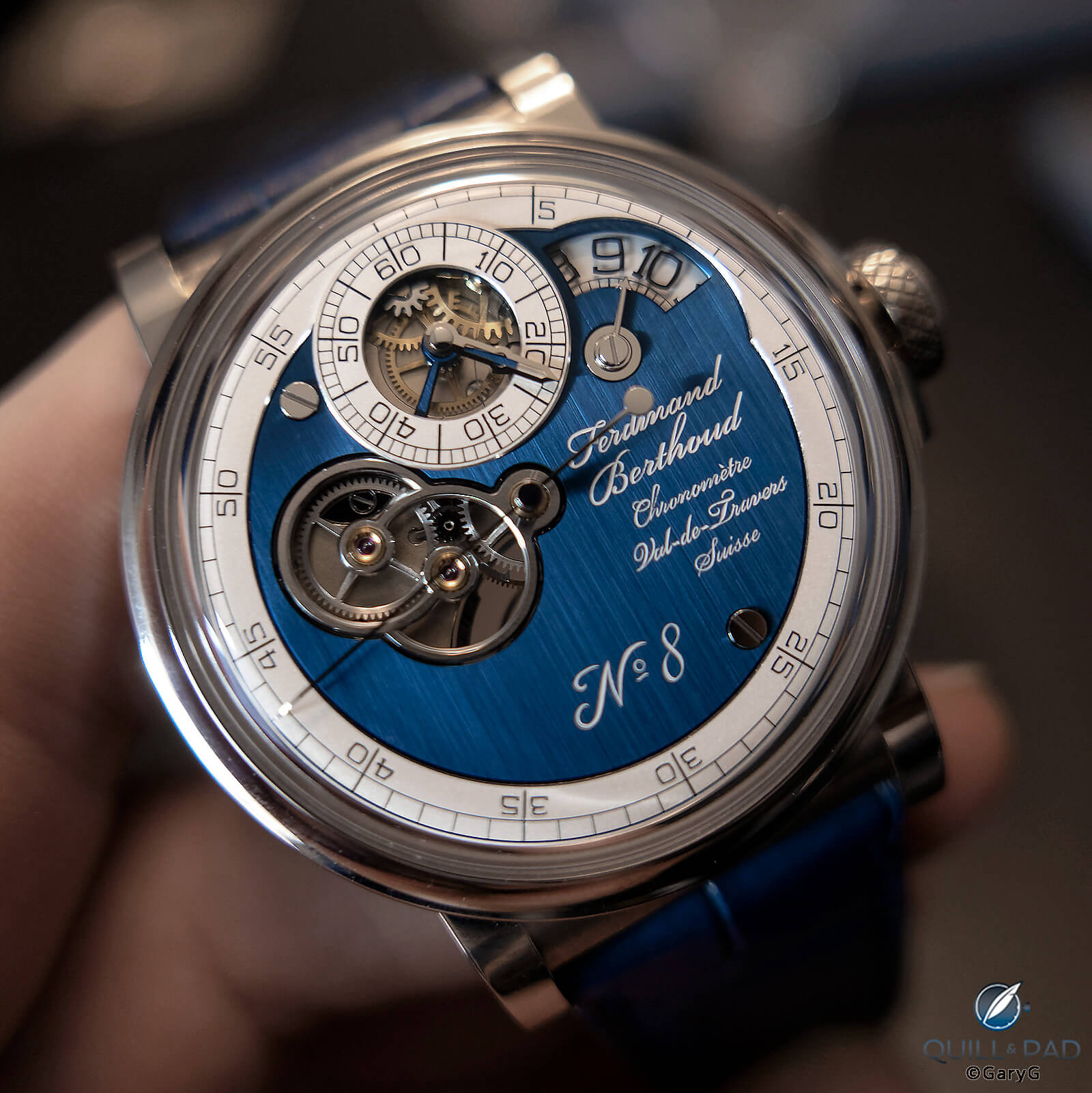 Ferdinand Berthoud 2RSM.2-1 as seen at Watches and Wonders Geneva 2022

At 44 mm, this watch is big but wearable; and I’m a fan of the use of a round case rather than the octagonal example of the first Berthoud references.

I hope that the makers of the many other outstanding pieces entered in this year’s GPHG competition will forgive me for stopping with this list, but as I reviewed the overall list of nominees, I was encouraged to see at least one watch in each class that I’d be pleased to wear.

Of course, there’s always room for more of the year’s new watches to be entered! It’s a shame that some of 2022’s top introductions weren’t brought forward by their makers, and I continue to encourage both big brands and independents to join the competition and do their part to promote the very best of the watchmaking arts.

Hermès Arceau Le Temps Voyageur: Time Traveling Around The World (And A Standout Star At Watches And Wonders 2022)

Why I Bought It: Rexhep Rexhepi/Akrivia Chronomètre Contemporain

MB&F LM Sequential EVO Dual Chronograph: An Ingenious Application Of A Simple Idea (That Nobody Had Thought Of Before)

Why I Bought It: Ludovic Ballouard Upside Down – Reprise