The king is dead, long live the king!

When I was young, I didn’t quite understand this statement as it seemed to be almost untethered from what was happening. How could the king have died, and the subjects still be cheering for the king to live a long time? It wasn’t until my teen years that I finally saw a movie in which a king died and the court cheered “Long live the queen!” (as the queen took over) and it all suddenly made perfect sense. The cheer for the new person followed the lament for the previous ruler – it just was so often men following men as rulers that the phrase seemed pointless.

With the recent passing of Queen Elizabeth II, the phrase popped back up into use as people said, “The queen is dead, long live the king.” Interestingly there is usually one of two tones in which the phrase is spoken, and it relies completely on how good the previous ruler was. If they were a ruthless tyrant and a young noble knight vanquished them to ascend to the throne, it is yelled triumphantly; everyone happy that they can finally cheer for a king they like.

But when the deceased ruler was an icon, long beloved, the phrase is uttered in sadness and mourning, such as it was with Queen Elizabeth, a monarch who reigned for 70 years and the only ruler a majority of her citizens ever knew. These two scenarios cover most situations I have seen. But there is another tone, one much less common, and that is a cry of surprise and slight hesitation. This could happen when a monarch dies suddenly and the next in line is an unlikely king or queen, and everyone isn’t sure what to make of it.

The previous ruler could even have been great, a favorite and well liked, but the change is slightly startling, and people might need some time to adjust. This reminds me of Greubel Forsey and the new Tourbillon 24 Secondes Architecture. 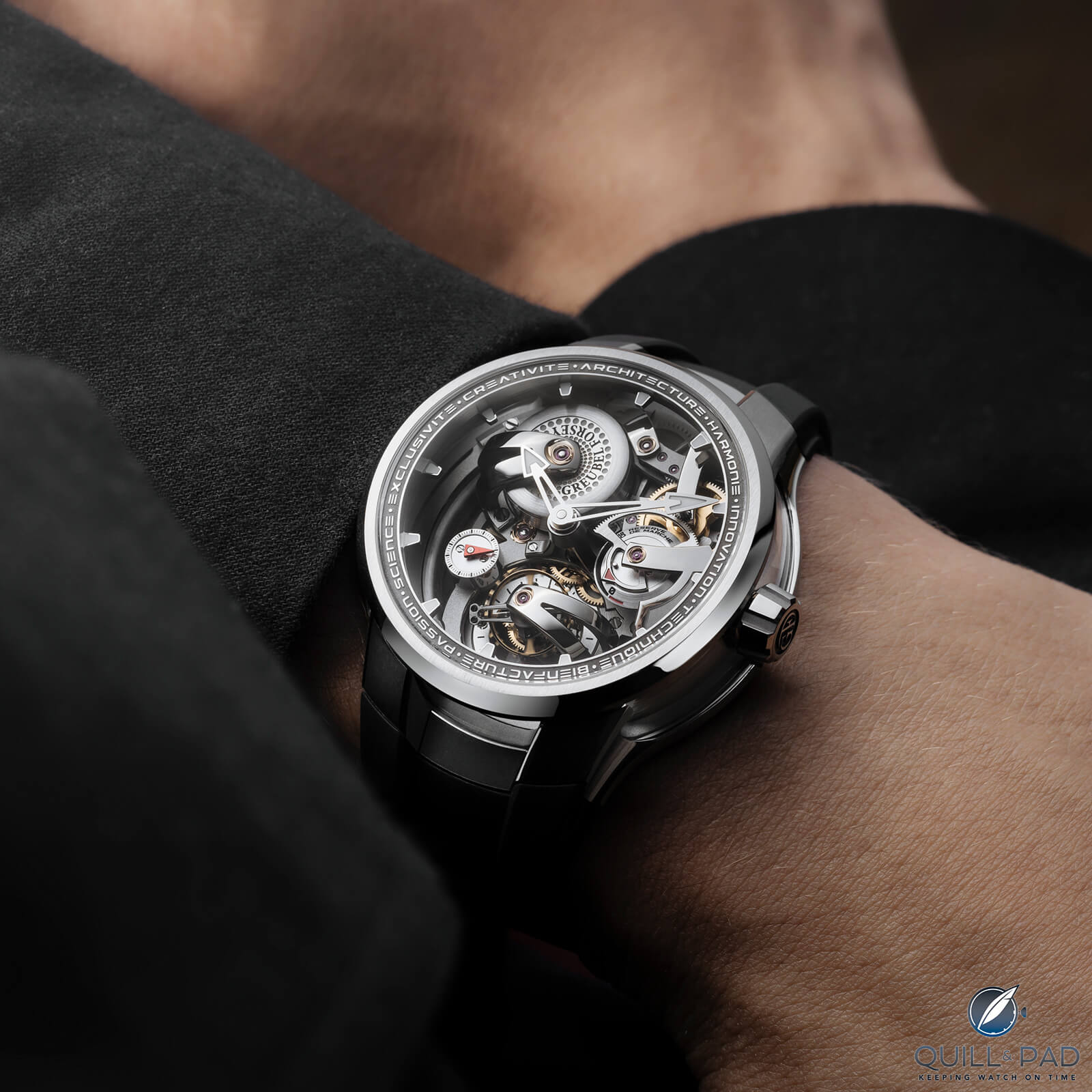 When I first saw it, I was surprised. But now, in the full context of everything happening with the brand, my main reaction is, in a slightly trepidant tone – Greubel Forsey is dead, long live Greubel Forsey!

This new release is both completely unlike anything the brand has ever released and perfectly fits with the overall brand concept. The movement architecture, case design, and overall aesthetics feel so foreign to a typical Greubel Forsey watch, yet upon closer inspection it is exactly what you would guess is from the brand synonymous with incredible mechanics and peerless hand finishing. This is an incredibly nuanced watch.

The Tourbillon 24 Secondes Architecture is technically a fairly typical Tourbillon 24 Secondes watch with the central hours and minutes, a very small offset dial for seconds, a power reserve, and an angled tourbillon assembly at 6 o’clock. The movement is fully open to the front with extreme depth found throughout; the bridges, supports, wheels, and plates are all shaped rather simply and finished to the highest levels in the industry.

The case is atypical in shape just like many Greubel Forsey watches, and it has relief-engraved text along the bezel with sapphire crystal windows on the side of the case band like many watches that came before. The rear of the movement is kept simple and clean and largely avoids extreme architecture like the front, opting for a very modern three-quarter plate vibe.

So why would I say this watch is surprising, prompting me to claim that Greubel Forsey is dead?

Because this watch signals that the “old” Greubel Forsey is dead, and its awesomeness gives reason to cheer on the brand and scream long live Greubel Forsey!

A shift in style . . . but not substance

Every detail about the Tourbillon 24 Secondes Architecture is a shift from what the brand has created before but there is a clear through line to the older pieces. The support for the hour and minute hand axis is once again a tall tower extending out from the main plate, sporting three feet and an upper collar that helps to boldly center the movement. But it isn’t exactly like the versions of this we have seen on other pieces; this one is less rigid, less square. Instead of the feet splaying out at sharp angles from the supporting legs, with a nice internal angle, these feet smoothly transition in a curve, almost as if the metal had been shaped like clay instead of machined from the hard titanium that they are. 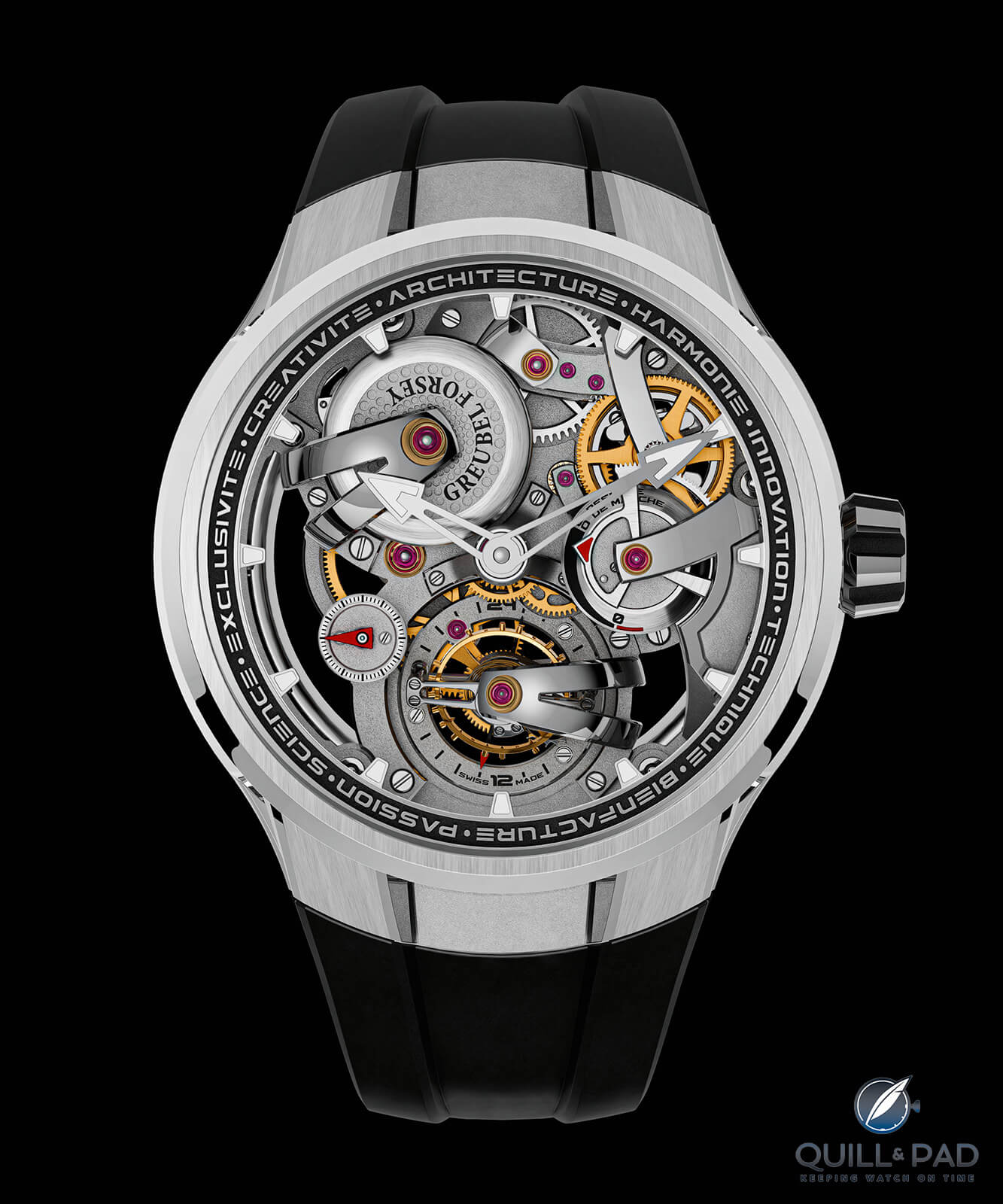 A single instance of this would be noteworthy, but this is when you start to look around and realize that it is the foundation for almost the entire watch. All of the bridges use curved architecture, parabolic in shape, to create a softer, more fluid structure to the movement. The mainspring barrel has not one single visible sharp edge to its body, and the decoration continues that theme. Instead of sharp, recessed sections with relief text and internal angles, this barrel features a circularly radiating pattern of circles (who would have guessed) with a section of circles replaced by the Greubel Forsey name.

The power reserve display is shaped like a flying saucer, and the bridge supporting its pivot has an extension on it that gently curves away toward the main plate, giving the entire movement the feeling that it is domed. That actually continues on the rear of the movement with the 24 second tourbillon flanked by two curving dome-shaped sections, making it appear as if it were resting in a dish.

Not your grandmother’s Greubel Forsey

The base plate that supports the mainspring, the bottom of the tourbillon, and a handful of gold chatons also introduces another new feature to Greubel Forsey: massive chamfers. In a cutout surrounding a gold chaton and the aperture where the power reserve differential is supported (on another, shorter, curved foot tower) the base plate has an area of chamfer that looks to be a mile deep. 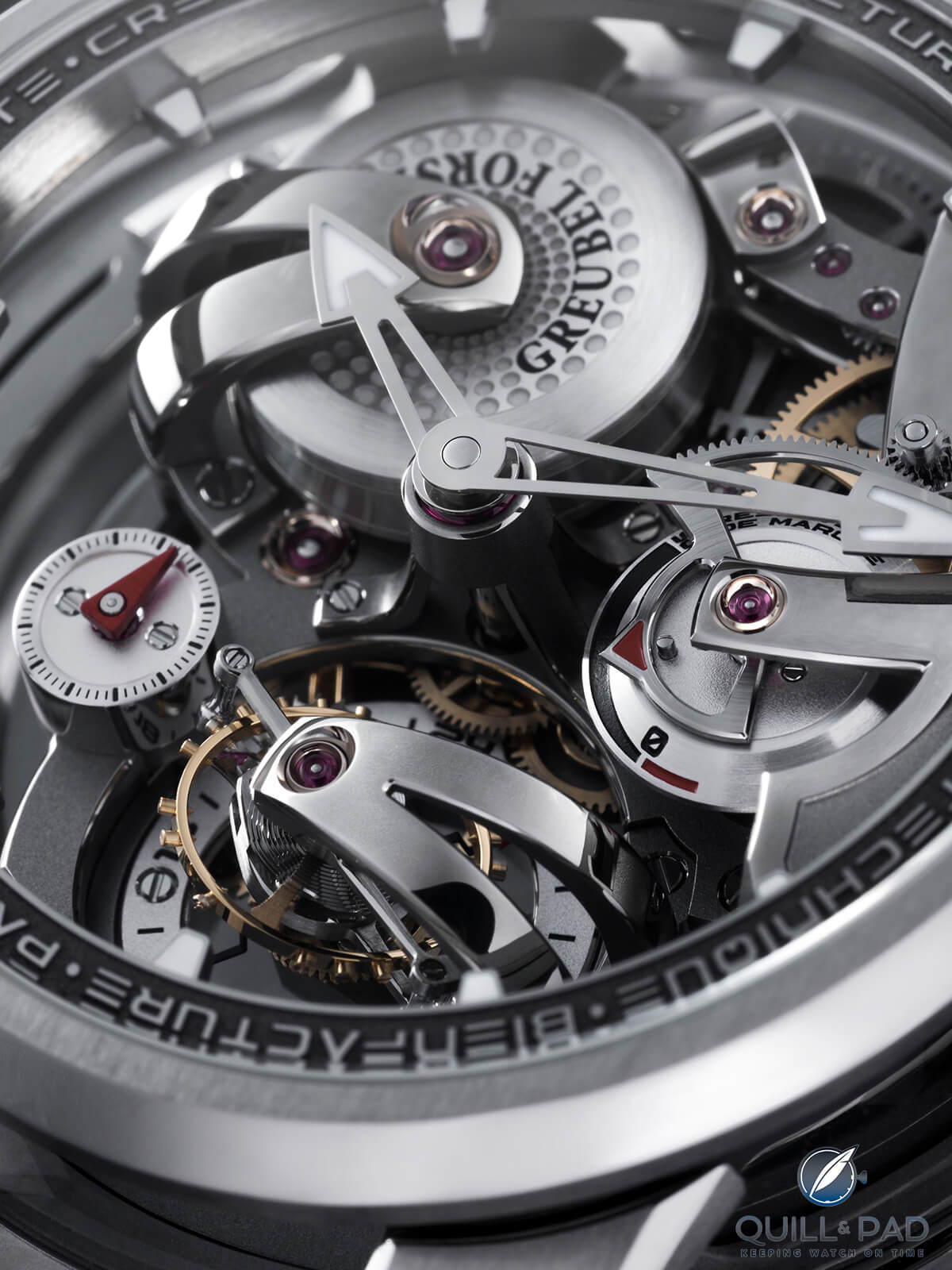 Nowhere else on the movement do you see a feature like this, but it appears to be a way to direct the eye toward that unquestionably awesome axis support, and that is it. Most classic Greubel Forsey design would have seen tall, flat sides to the plate that are perfectly brushed to reflect in polished surfaces nearby, but not anymore. 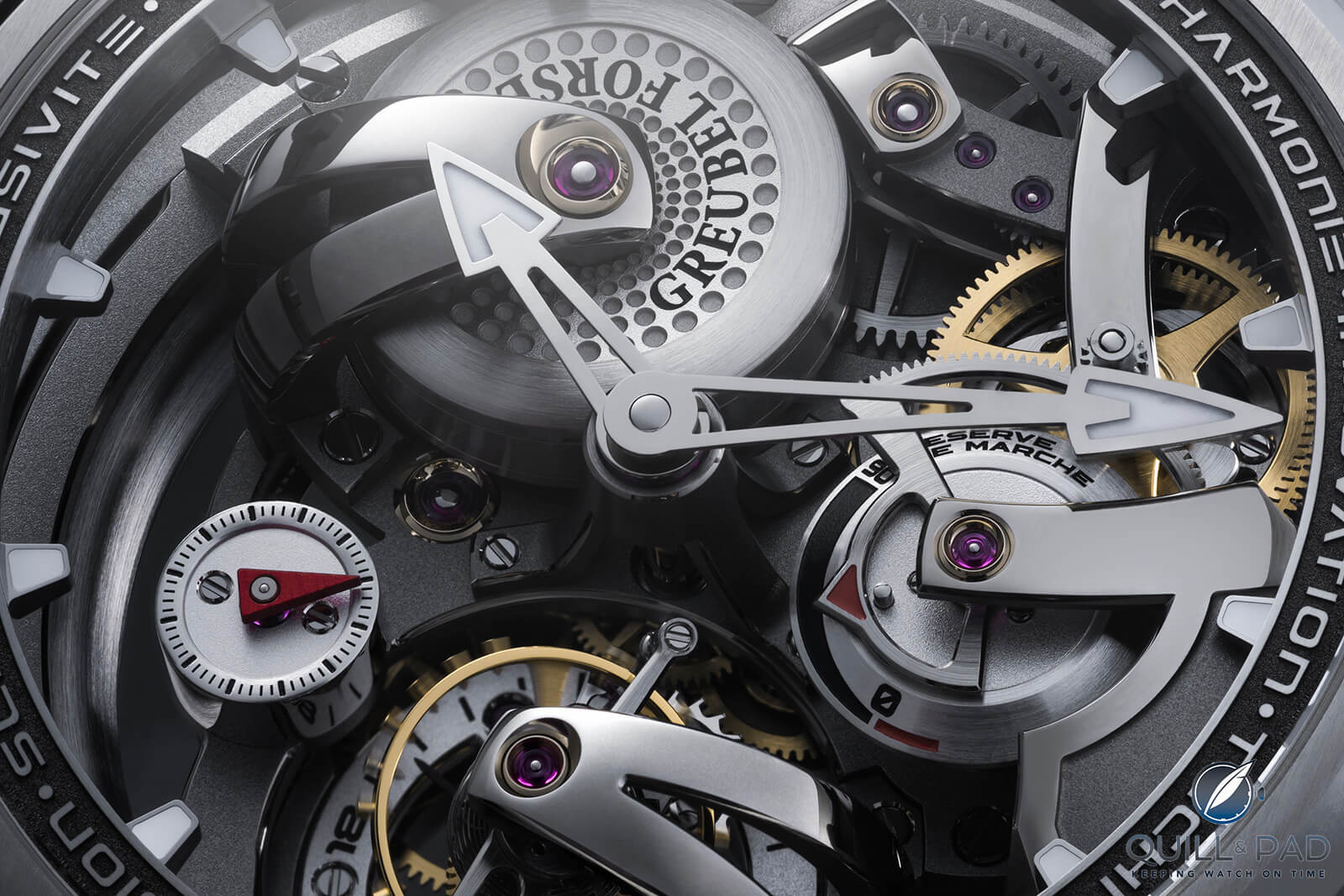 Yet throughout all of this, the small second hand is still the very familiar red triangle, and the hour and minute hands are still the same skeletonized arrows. The finishing is all still the best in the business with astonishingly perfect black polishing on the curved and domed surfaces of the bridges, hands, and other small features like screw heads. The chatons are still perfectly polished, the surfaces of plates still softly blasted, and many edges are still hand-chamfered and -polished.

Breaking its own molds

The case is both following in the footsteps of the Convexe collection and entirely its own beast. First of all, and probably most importantly, it has a completely sapphire crystal middle case ring. Not a sapphire crystal window into the middle of the movement like on many pieces that came before, but a 360-degree sapphire crystal ring forming the middle band of the case. 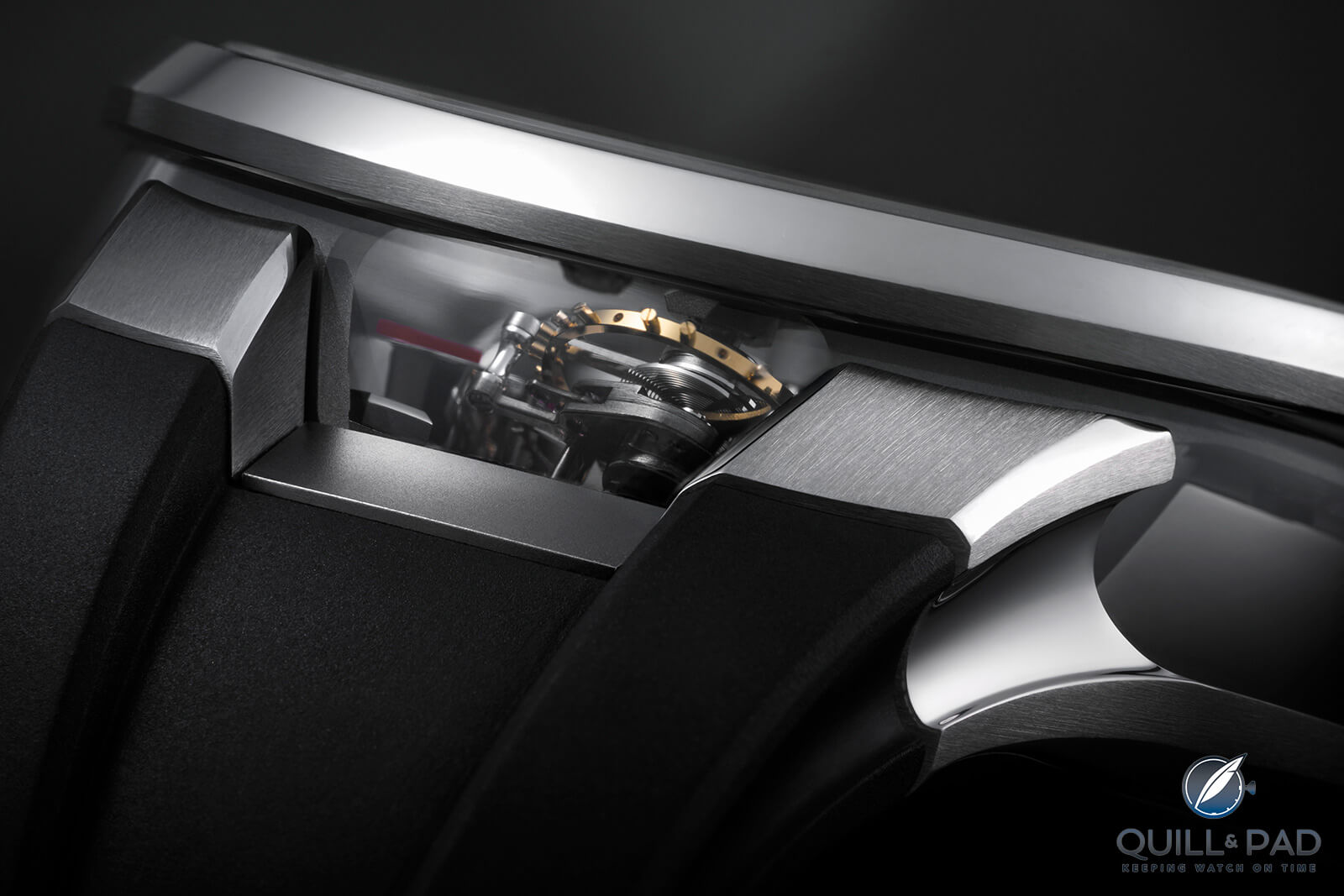 Even though I read the press release and looked at the photos, this is something that didn’t quite hit me until I examined the lugs a big more closely. The lugs do not attach to the middle of the case but extend from the case back upward and outward, effectively cantilevering over the side of the case, floating but unconnected. They extend very near to the bezel, but they do not connect, the outward edges curving (once again) to appear almost scalloped or sculpted from clay. 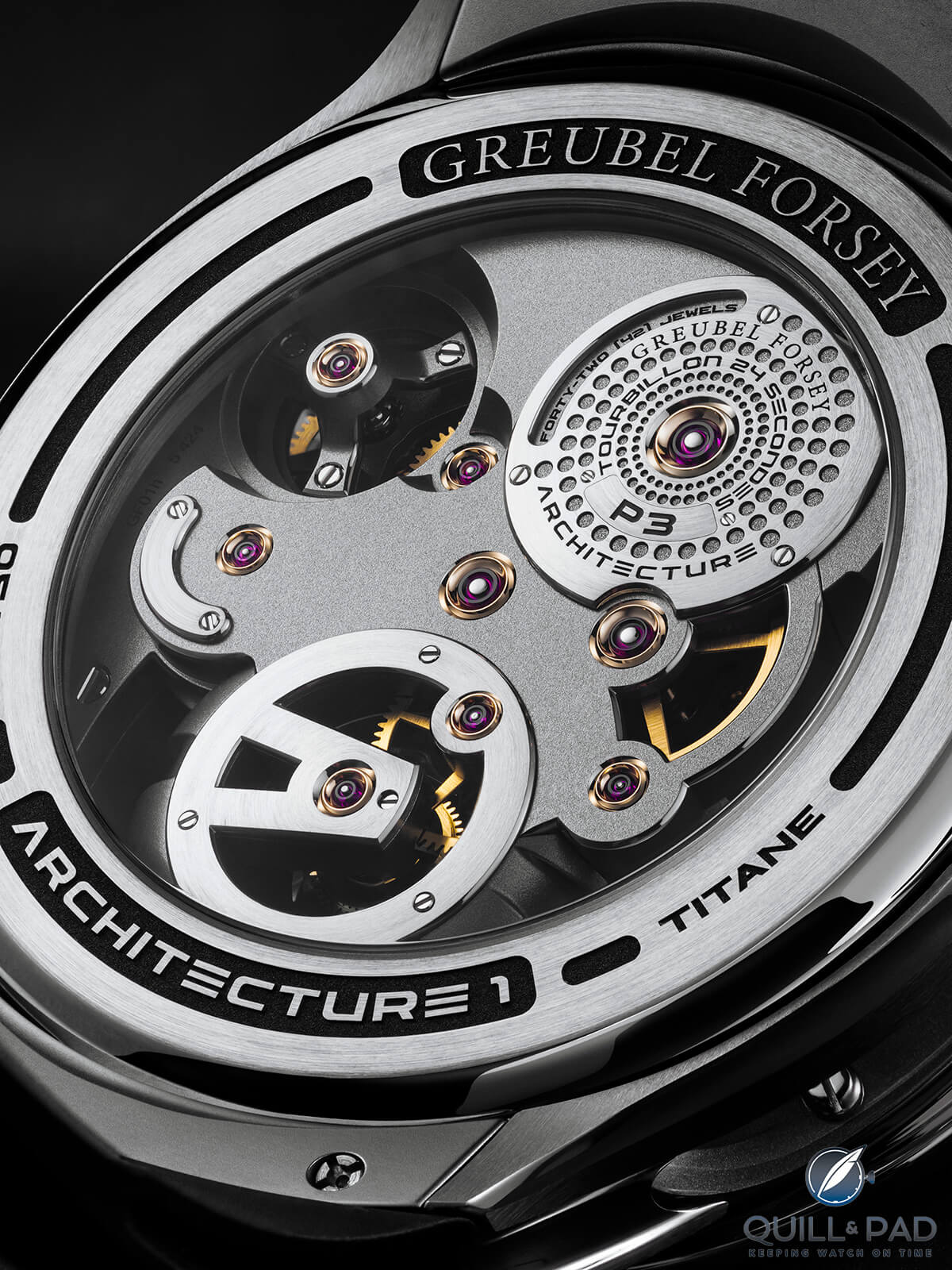 Back of the Greubel Forsey Tourbillon 24 Secondes Architecture

What makes all of this even more incredible is that the entire case shape is what Greubel Forsey describes as a “convex conical frustum,” which is a fancy way to say a curved cone with its top sliced off. Once again, to allude to sculpting clay, the form is completely geometric mathematically but feels entirely organic and flexible, shaped by hands and bent into its final configuration. 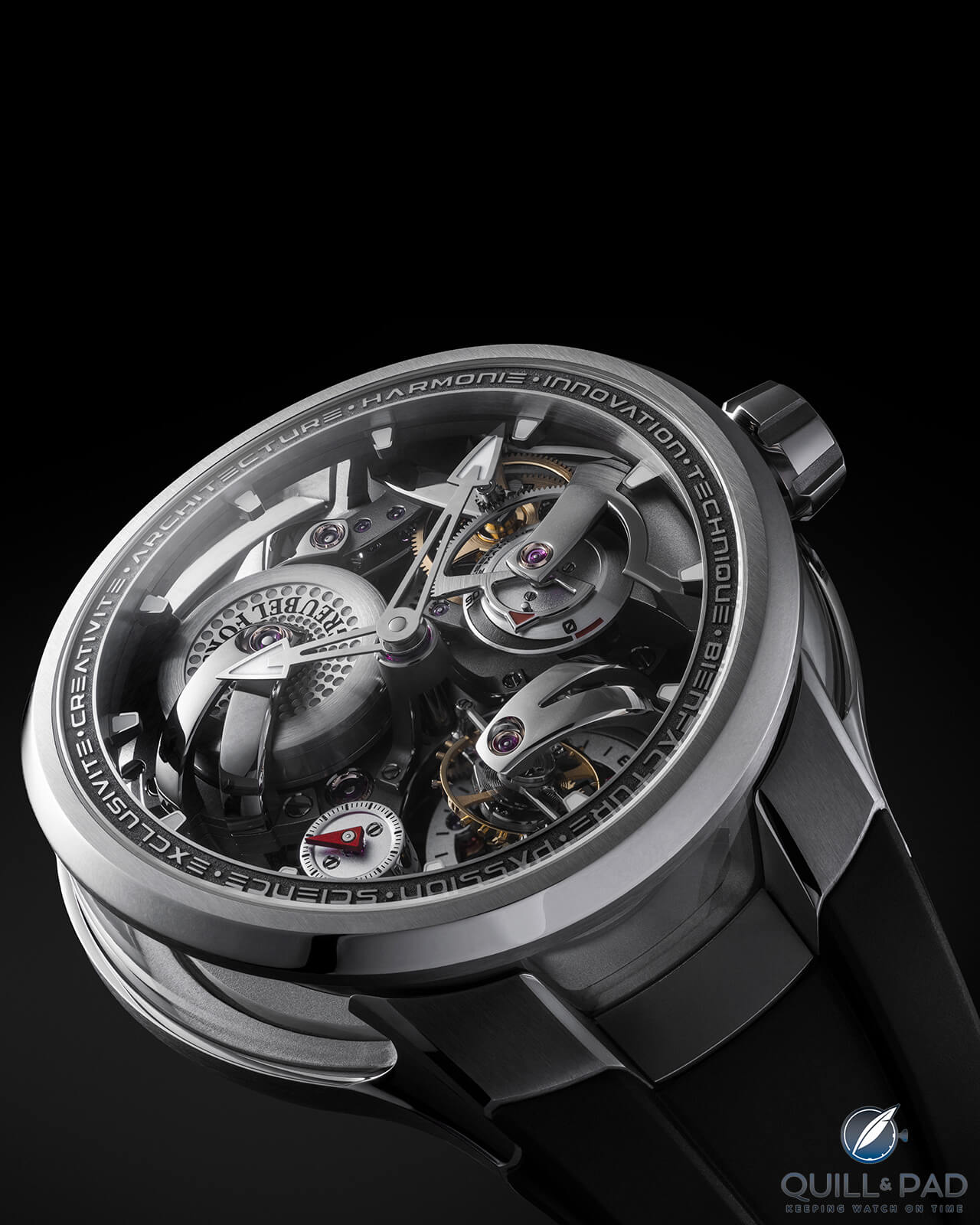 The lugs and case back form ribs when viewed from the front of the case, making the three-dimensional strap feel perfectly integrated into the overall shape. Helping this feeling of integrated-ness is the fact that there are no case screws holding everything together. The strap is held into the case back via two small spline screws, but the bezel, sapphire crystal ring, and case back are invisibly assembled, adding a bit of wonder to the extreme engineering of the watch.

The entirety of the Tourbillon 24 Secondes Architecture demonstrates that the Greubel Forsey we have loved for years might be a feature of our past, but that it also has a bright future. New CEO Antonio Calce redefines some goals, collections, and shifts gears for increasing production. Greubel Forsey is becoming something new.

The brand is built from the same building blocks and has many of the same goals, but like a Ferrari from 1965 it is a world apart from a 2022 Ferrari. The timepieces coming from Greubel Forsey are going to evolve, and the Tourbillon 24 Secondes Architecture is the clearest shift yet. Not to worry, though, clearly the core of incredible mechanics and finishing are all still there, and the aesthetics are in the same ballpark, so future models and expansion will likely be something as awesomazing as anything we’ve seen in the last 18 years. 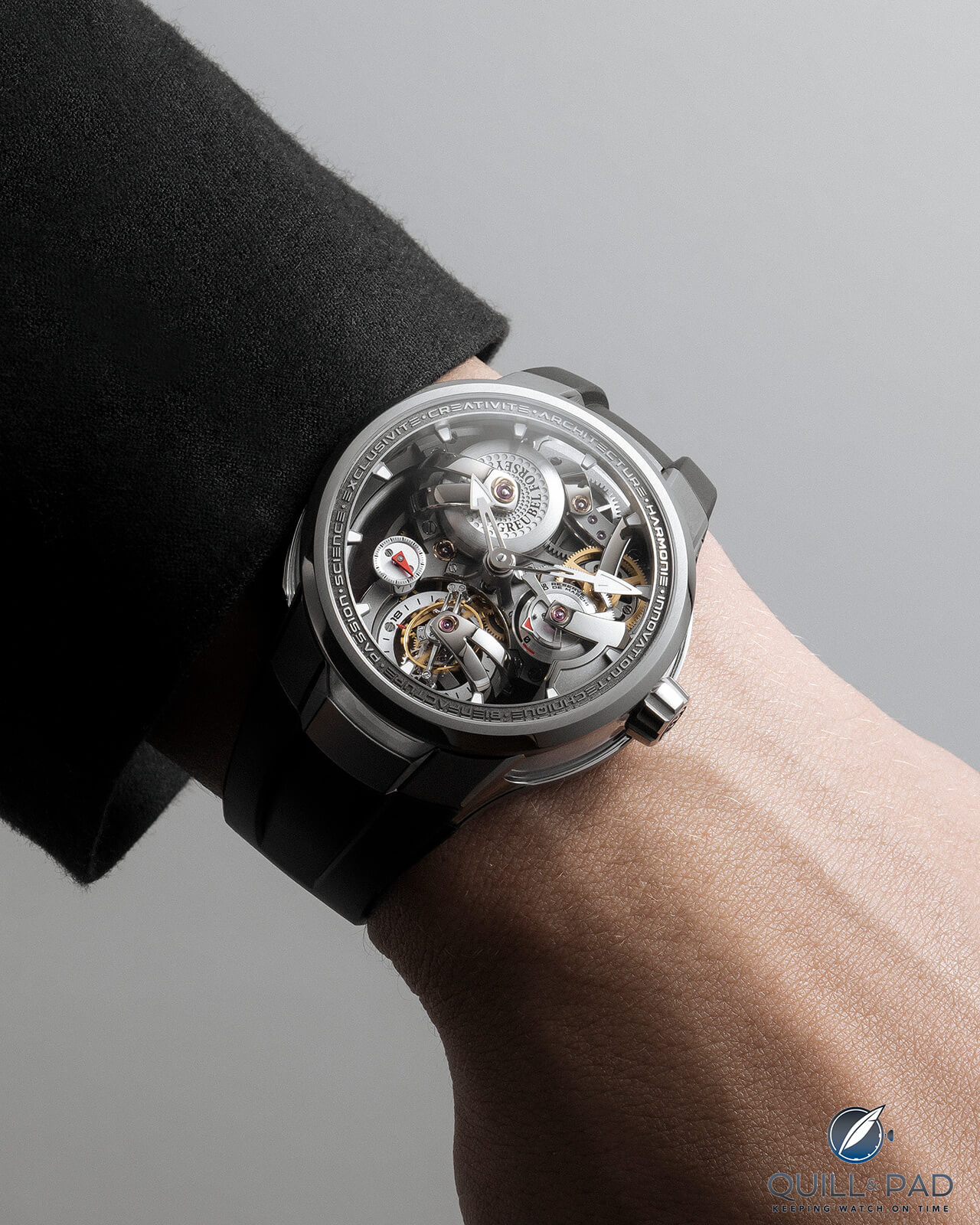 So even though it’s made of sapphire crystal and titanium, let’s try to break this one down!