Hermès Arceau Le Temps Voyageur: Time Traveling Around The World (And A Standout Star At Watches And Wonders 2022)

For many in the watch world, the fairly unassuming Hermès Arceau Le Temps Voyageur – with no tourbillon, no chimes, and nothing too eye-catchingly crazy at first glance – became the watch of the fair at Watches and Wonders 2022. In fact, in our post-fair round table it was the “best in show” for at least half of our on-location team.

The Arceau Le Temps Voyageur is many things but mostly it is indicative of the playful nature of complications that Hermès has cultivated over the last decade. And yet it remains extremely useful in an everyday sense. 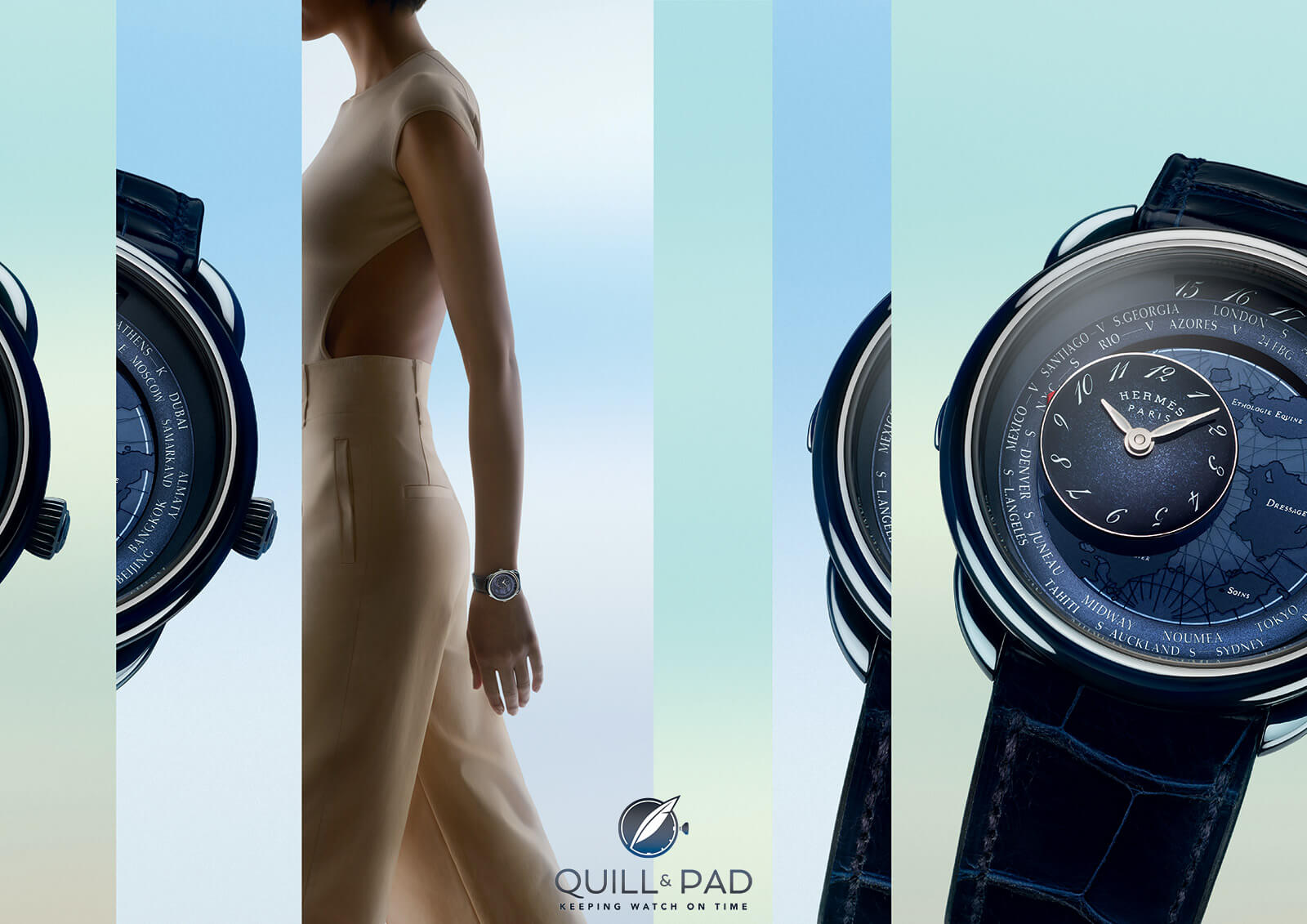 The Hermès Arceau Le Temps Voyageur is a handy worldtime complication with very clever execution that makes it incredibly simple to use and read. And the Voyageur is at the same time a worldtimer expressed in a poetic way, fully in line with both the overarching Hermès theme of 2022, which is “travel” (as in discovery), and the 2022 La Montre Hermès theme, which is “lightness.”

The wearer simply uses the pusher to rotate the hour/minute subdial around the dial periphery to the selected city to display local time anywhere around the world. The hands on the mobile subdial adjust automatically to the position that the subdial points to with a tiny red marker. 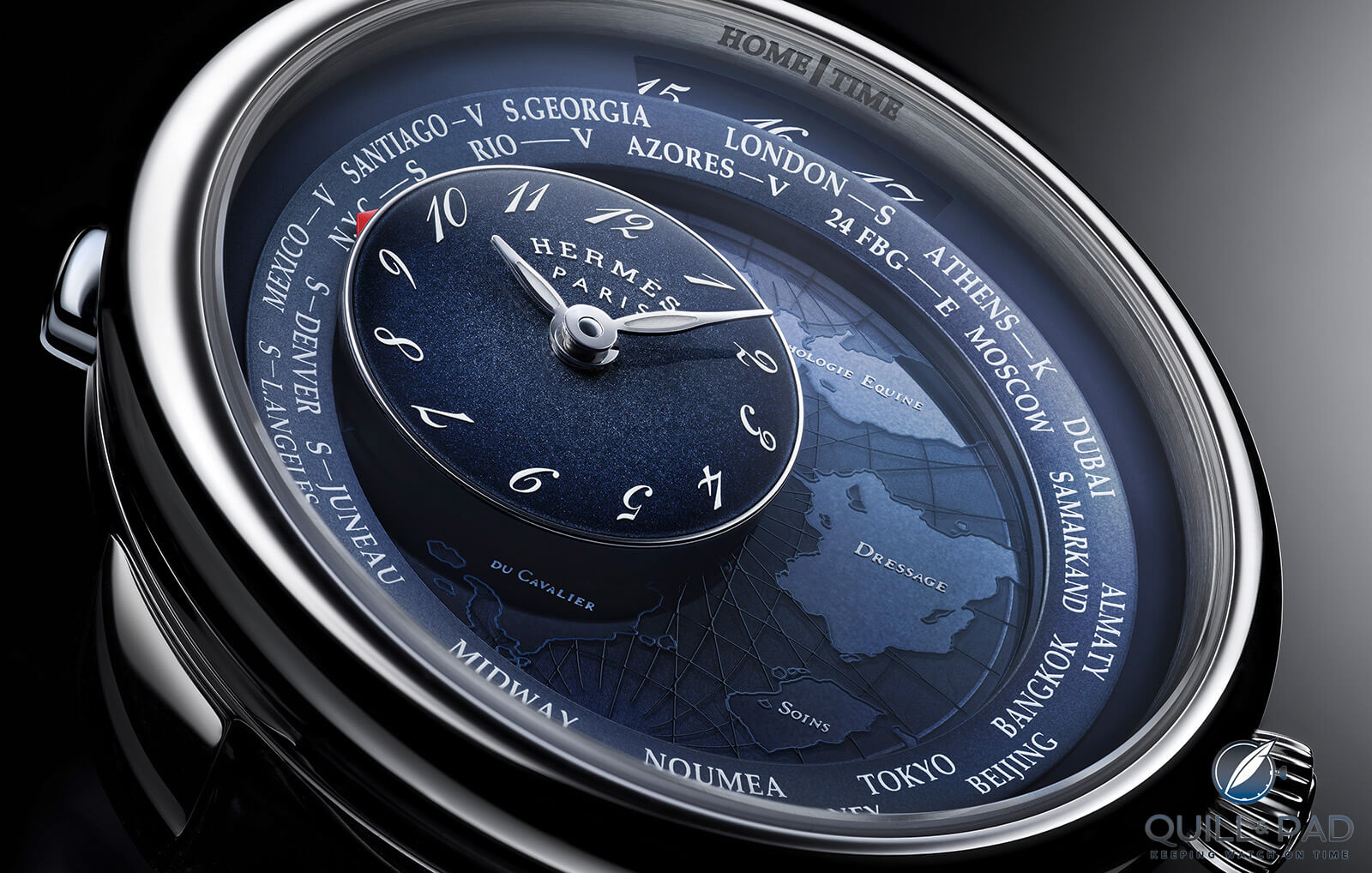 This mobile indicator is driven by a 122-component module created by Jean-François Mojon and his team at Chronode, following on from his Arceau L’Heure de la Lune idea, which featured twin moons revolving around the dial. This “travel time” module is 32.7 mm in diameter and only 4.4 mm in height. “But what is important is the result at the end,” Mojon commented on the approximately three years it took to make this creation, which is far more complicated than it looks.

In fact, it looks and feels so light that it seems to lift off the dial, hovering over the world map as it makes its journey. The fact that we do not see any mechanics moving the subdial or even screws holding it in place is like magic, keeping the aesthetics simple.

In a way it is magic: Mojon did not use a spring to move the subdial; the satellite moves using the force created by the wearer pushing the button. Which means little to no energy is taken from the movement. Mojon related that only the minutes come from the base movement; the rest is all from the subdial’s module.

The movement base is an automatic Hermès manufacture H1837 crafted by Vaucher (Hermès owns 25 percent of Vaucher).

The Voyageur also shows home time, in a display in a window at 12 o’clock.

The Hermès Arceau Le Temps Voyageur is unlimited and comes in two executions and two sizes: a 41 mm platinum case with a matte black DLC-treated titanium bezel and a 38 mm steel iteration. Both are incredibly wearable and comfortable, even on small wrists like mine.

The playful elements of Hermès

But the best thing is that it’s a pleasure watching the subdial orbit the timepiece and a pleasure to press the button that operates it. It’s almost a visceral experience.

The dial-traveling satellite gravitates over continents and oceans belonging to a fantasy map that was first imagined by Jérôme Colliard for the Hermès “Planisphère d’un monde équestre” silk scarf: it is a “map of an equestrian world” according to the imagination of the artist.

Delhotal’s idea for this watch was to project an idea of depth, so the design used some of the imaginary continents and seas from Colliard’s map. Every year Delhotal proposes 20 new dials for Hermès based on the ideas of existing scarves in the brand’s iconic collection (if there was ever an iconic scarf collection, this is the one!). These dials are produced in Hermès’ own dial manufacture, Natéber SA.

Delhotal hit upon the idea of using the “Planisphère d’un monde équestre” while perusing the company’s archives for inspiration. As the imaginary world that Colliard created is entirely equestrian, it fits exceedingly well with the Arceau case, whose lugs were designed by Henri d’Origny in 1978 and inspired by stirrups. This case is a quintessential expression of Hermès style with its playful, asymmetrical look.

The whole thing is just wonderfully coherent and consistent, naturally completely in Hermès fashion. (If I were a Mandalorian in the Star Wars universe, I might say “this is the way” at this point . . .)

Transferred to the watch, you have to look closely to see that the map is not really the world as we know it but is rather infused with the imaginary details. And the laser-engraved galvanized dial is also quite technical.

In the version with platinum case and matte black DLC-treated titanium bezel, the dial is blackish with light grey pad-printed continent names and contours, while the stainless steel version has a blue dial and elements. The oceans are laser-engraved then lacquered, while lines of longitude and latitude are pad-printed in charcoal grey or blue, depending on the watch version.

The city ring featuring 24 locations is sandblasted black on the black watch and satin-brushed blue on the blue one. The location names are printed in silver-colored powder or white respectively. The home time display is “sunburst” black or blue. The hands are in black gold (black watch) or rhodium plate (blue watch) and coated with Super-LumiNova for wonderful legibility. 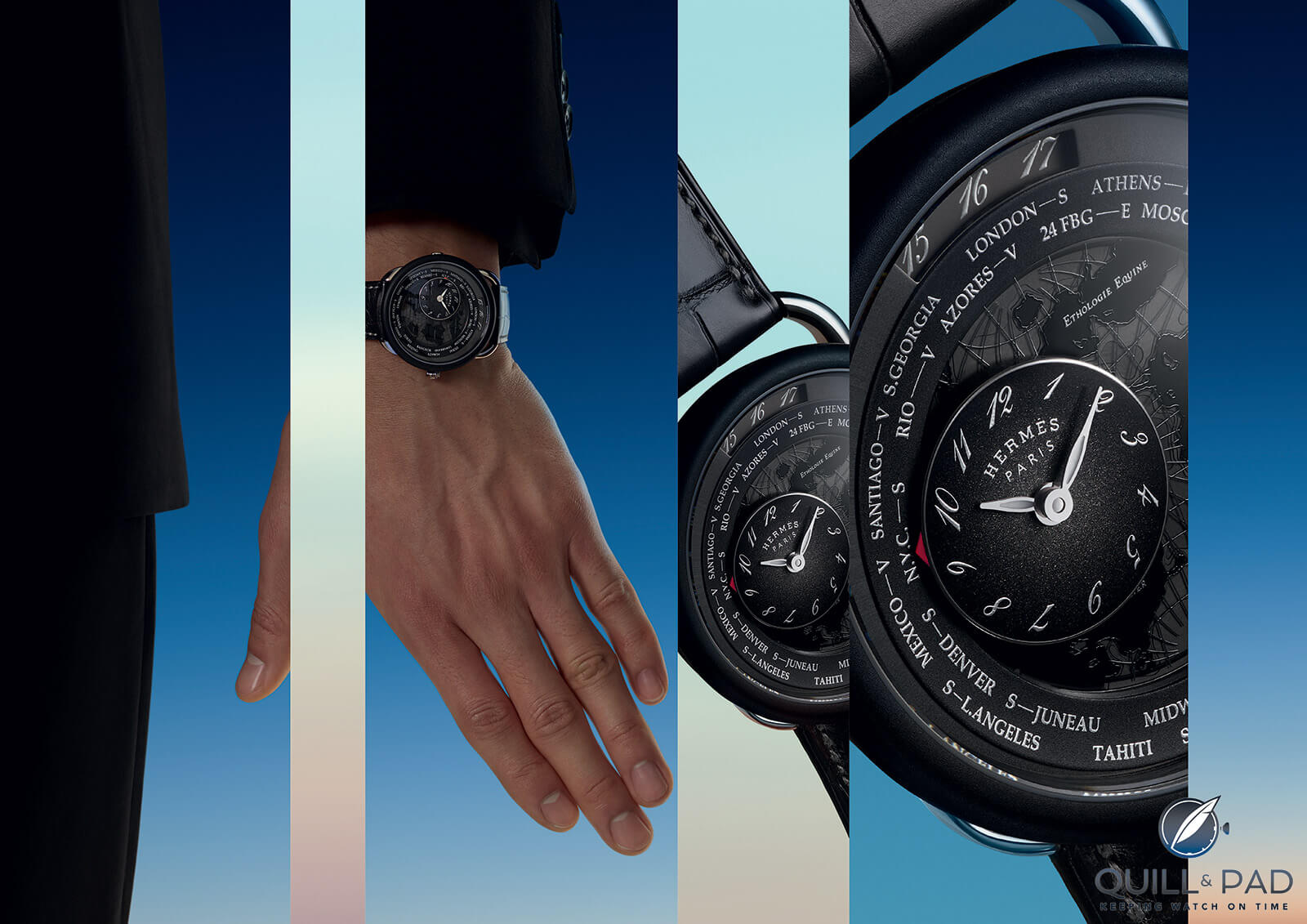 One “detail” that is practically mind-boggling: the price

Yes, it’s gauche to talk about prices. And we all know that if you have to ask the price, you probably won’t be able to afford it.

“Because we really want to bring value for money and to avoid any suspicion of arrogance,” La Montre Hermès CEO Laurent Dordet told me regarding this. “We certainly want to avoid that because we think we have everything to prove every year in our products and we don’t want to be suspected of arrogance in terms of price.”

And watch out for a surprise third color variation launching toward the end of the year!

Hermès Arceau The Three Graces: A Giraffe In A Dial-Sized Savannah

Travel in Style with the Breguet 5557 Marine Hora Mundi