If anyone thinks that Marc Newson’s first watch design was the Apple Watch they are missing something, as this prolific designer has been active in the watch world for more than three decades (see Talking With Marc Newson: Jaeger-LeCoultre’s Favorite ‘Clock Designer’ Styles New Atmos 568).

Granted, Newson’s body of horological work might not be as significant as that of say Eric Giroud, but neither has it ever been the former’s core focus.

Newson’s horological career began in 1986 with the Large POD Watch, a 60 mm behemoth designed to be worn over clothes and displaying the time through disks marked with dots. A year later, the Large POD Watch was joined by the Small POD Watch, and Newson even went on to create a wall clock in a similar style.

The designer’s mark on the watch world became more prominent when he joined entrepreneur Oliver Ike to form a watch brand called Ikepod. Because Newson was, and still isn’t, really part of the watch scene, his designs weren’t bound by a predetermined mindset from the industry.

Since Ikepod was a new brand without a history Newson could create his own playground, and that is exactly what he did. Ikepod’s watches were totally unconventional and innovative at the same time.

Perhaps the best watch with which to discover these aspects with is the Ikepod Megapode. 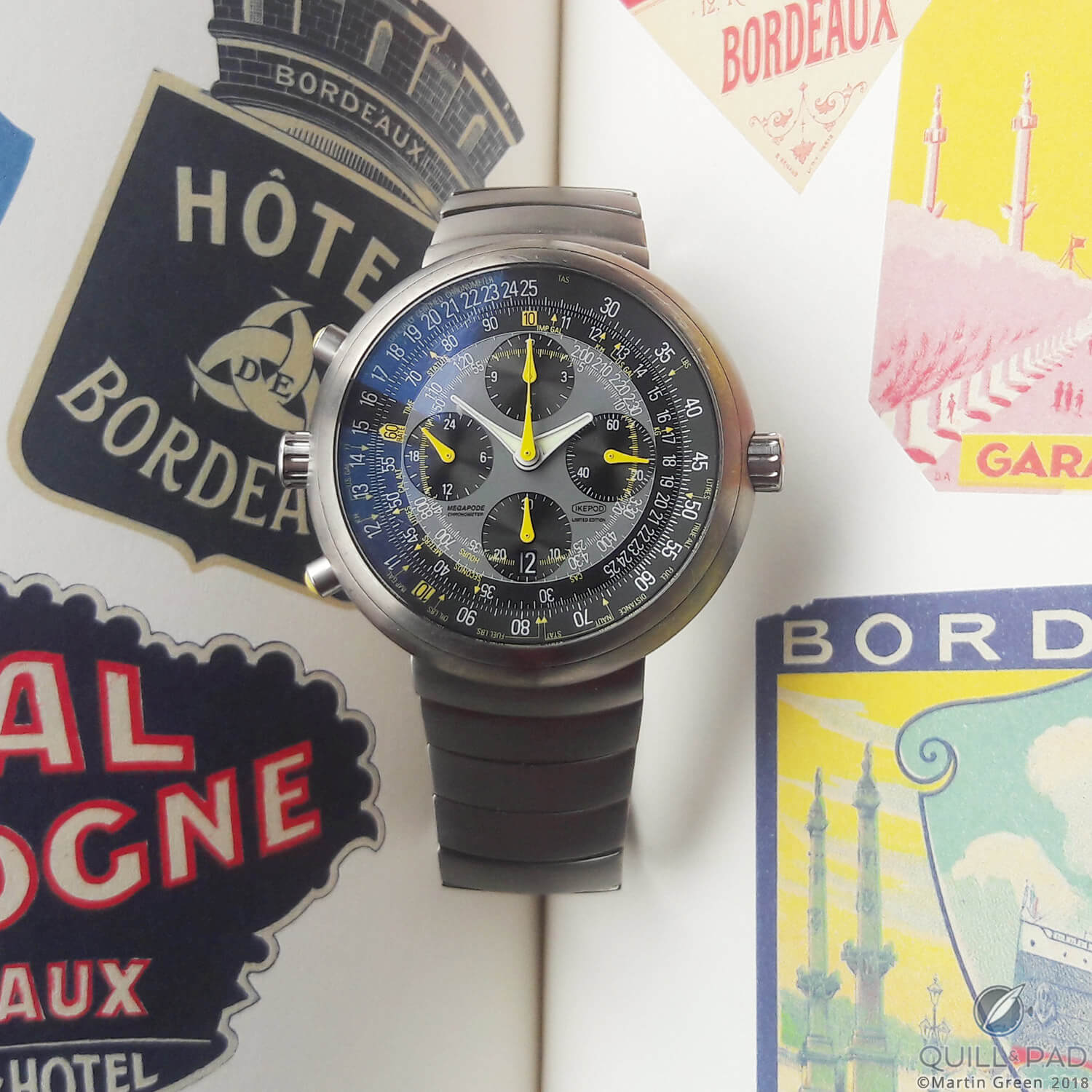 Ikepod Megapode: large is an understatement

The Megapode does justice to its name because it is indeed mega!

That says something because it was launched in 1999 when the world was already getting used to larger watches.

Still, with a diameter of 47 mm the Megapode was in a league of its own. Fortunately, this was done with purpose and not for sheer shock effect.

Despite making some interesting choices, Newson used the space to advantage: he placed the elementary timekeeping functions in the middle of the watch, yet gave them short hands.

Visually, this made the wristwatch look smaller as well as easier to read as there was not one function dominating the face of the watch. This layout also allowed Newson ample room to integrate an under-glass slide rule bezel. 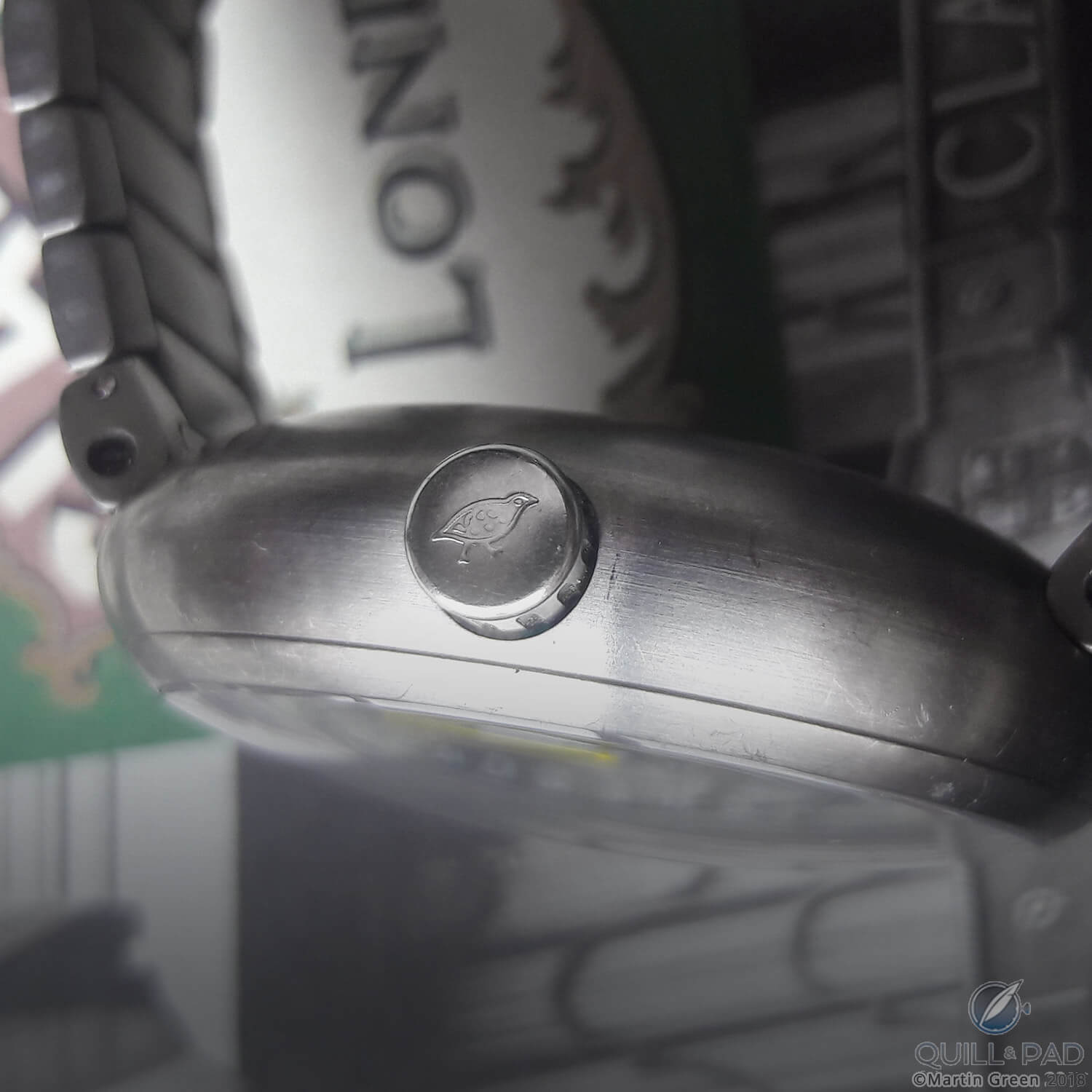 Hemipode bird on the crown of the Ikepod Megapode

The Megapode is full of seemingly small details combining to make a large impact like the shape of the hands and little bird etched into the crown. The bird is a hemipode, a bird of the suborder Turnices, which includes several types of quails. 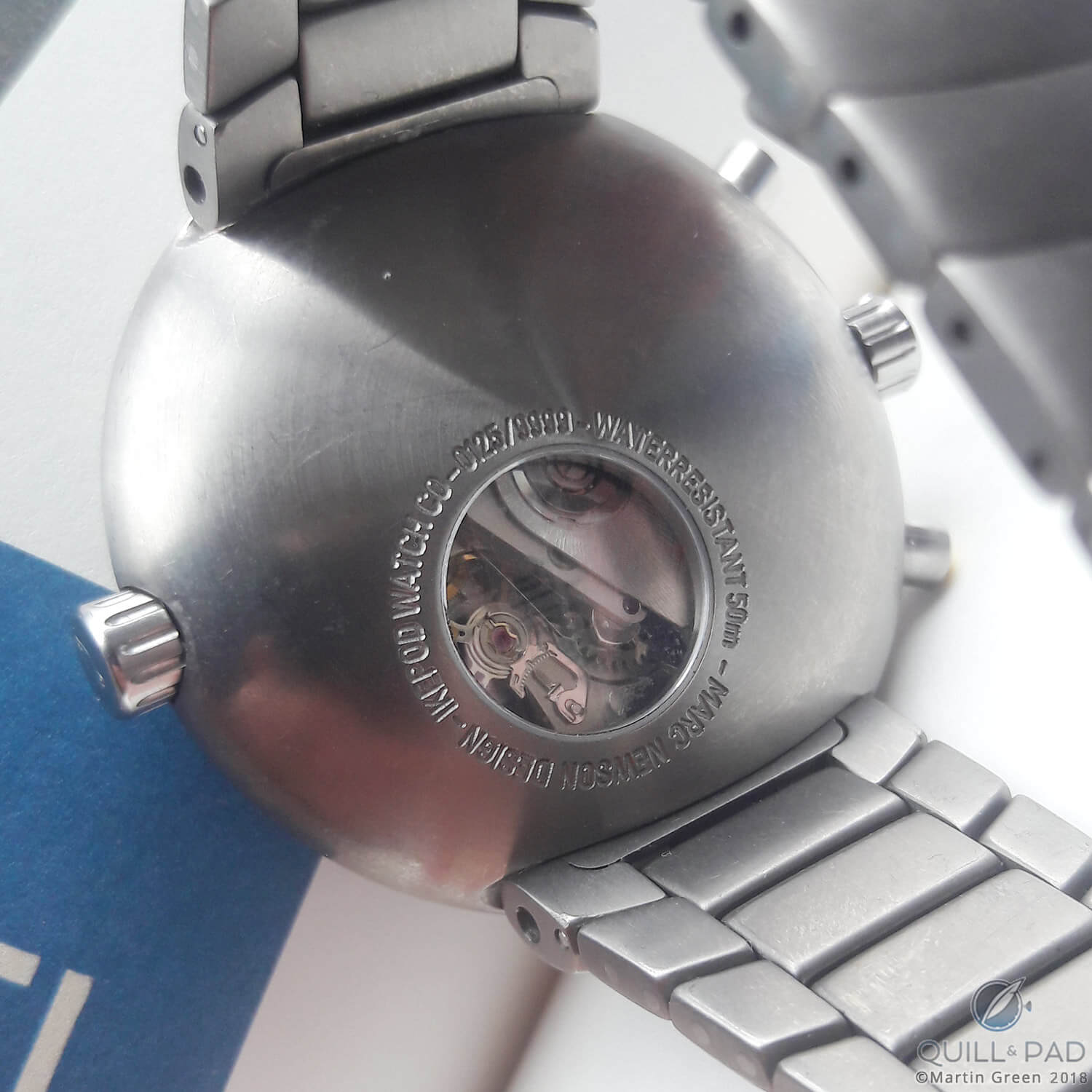 There is also a small porthole window Newson designed on the back of the watch, allowing views of the balance wheel. This may be fun, but pointless. However, it changes an otherwise massive case back into something a little bit more interesting.

If you are wondering why the Megapode pictured is not completely blemish-free, the reason is that it’s my personal travel watch.

Over the years, a series of watches have served me on my travels, and with every one of them I zoomed in ever closer to what I consider the perfect travel watch. Yes, I could buy a Casio G-Shock and call it a day, but I am simply too much a watch snob for that (and not afraid to admit it).

My biggest issue was that every time I found a new travel watch that seemed to suit my needs better, there always seemed to be a tradeoff.

In a twist of irony, I never went looking for the Ikepod Megapode, but it found me when offered by a vintage watch dealer as a swap for the Rolex on my wrist.

Sacrilegious to many perhaps, but to me it was one of the best deals that I ever made as I had found my perfect travel companion, and it’s so good that it even frequently graces my wrist when I am not traveling.

What makes this watch so perfect?

As the resident gentleman of Quill & Pad, I mostly write about modestly sized dress watches, which are my primary passion. A 47 mm watch doesn’t belong on my wrist, yet the Megapode is somehow different.

Newson designed the case to be as smooth as a pebble, and that makes that the watch sit on the wrist unlike any other watch I have every worn. The moment you put it on it seems to shrink. 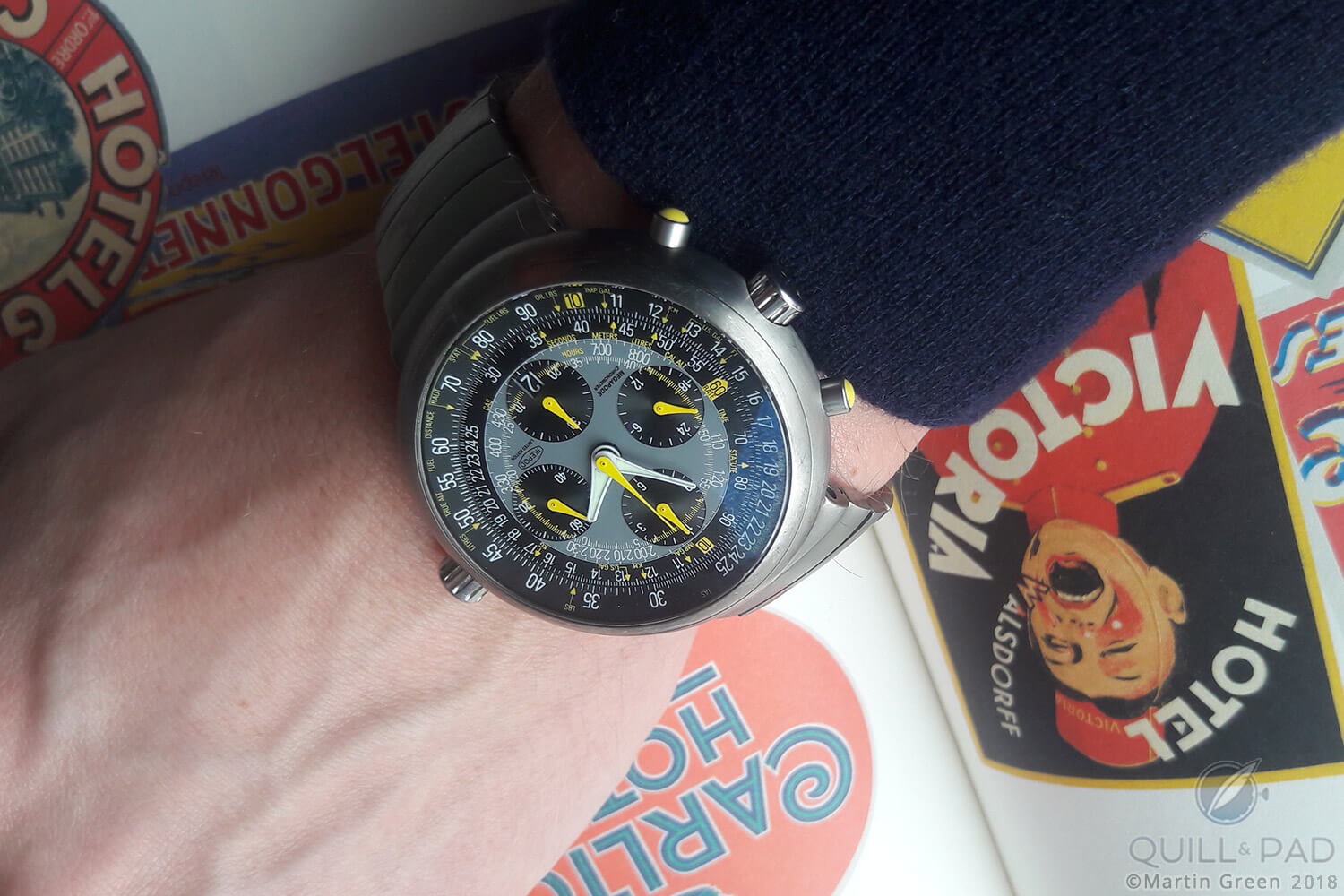 Ikepod Megapode on the wrist

It never becomes small; it simply becomes comfortable. The crowns and pushers are out of the way, but easy to operate when required.

While Ikepod also made the Megapode in steel, the titanium case is very light, increasing wearing comfort.

The vast majority of the Megapodes were fitted with rubber straps, which have closures much like the one now available on the Apple Watch. A very comfortable choice, but the bracelet is a work of art in itself in terms of fit, finish, and design, making it a must-have. 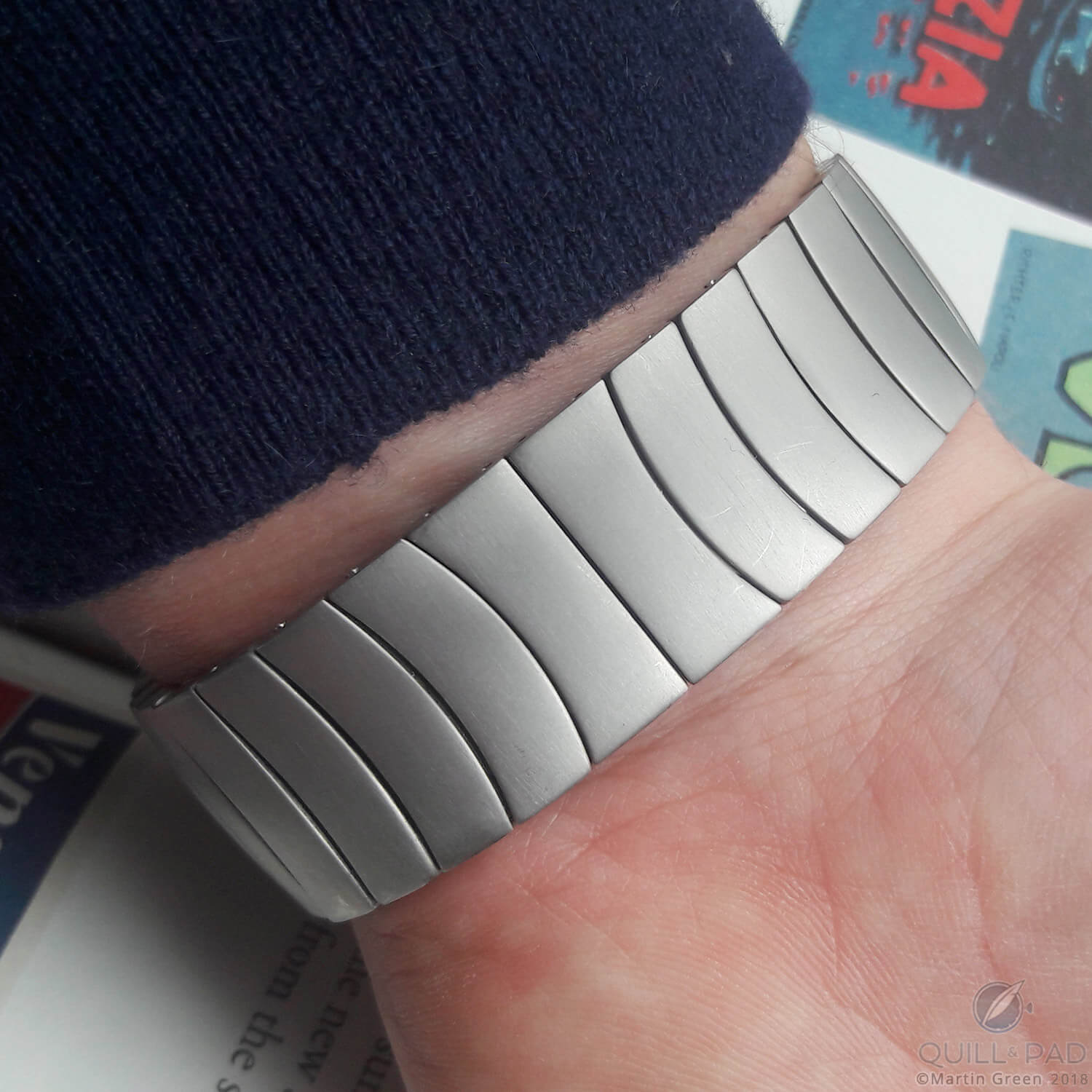 Again, for the current bracelet on the Apple Watch Newson took a lot of inspiration from his previous work.

While Newson is not your typical form-follows-function type of designer, the Megapode is indeed very practical with displays for chronograph, date, and second time zone, of which the last two can be set by the crown. So you don’t have to push little case correctors in the plane to set the time or correct the date when traveling abroad.

The crown and pushers are also placed on the left side of the case for extra comfort.

The recessed crown on the right operates the slide rule, which is placed underneath the domed sapphire crystal. As I don’t use this, the vast majority of its functions are lost on me. However, I do find it very handy to for calculating currency exchange rates abroad.

An Ikepod was never inexpensive, and in that light the choice of movement might be a bit crude as it runs on a solid, but uninspiring, modified ETA Valjoux 7750, yet this is a movement that I have come to love over the years. When I was still in college and my passion for watches was running high, I needed, of course, to have a mechanical chronograph in my collection.

While I might dream of a movement like a Frédéric Piguet Caliber 1185 or a Zenith El Primero, these were financially out of reach for me, so the 7750 became my friend, mainly powering Tissots and Hamiltons.

What the 7750 lacks in refinement, it makes up for in reliability. The movement can take a beating, and when push comes to shove it can easily be repaired at modest expense. Ikepod uses a modified version with a second time zone indicator that is chronometer certified by C.O.S.C. Not a necessity, but it does show that the 7750 is capable of precise timekeeping when well calibrated.

For me, this combination of qualities makes it a very suitable choice for a travel watch. 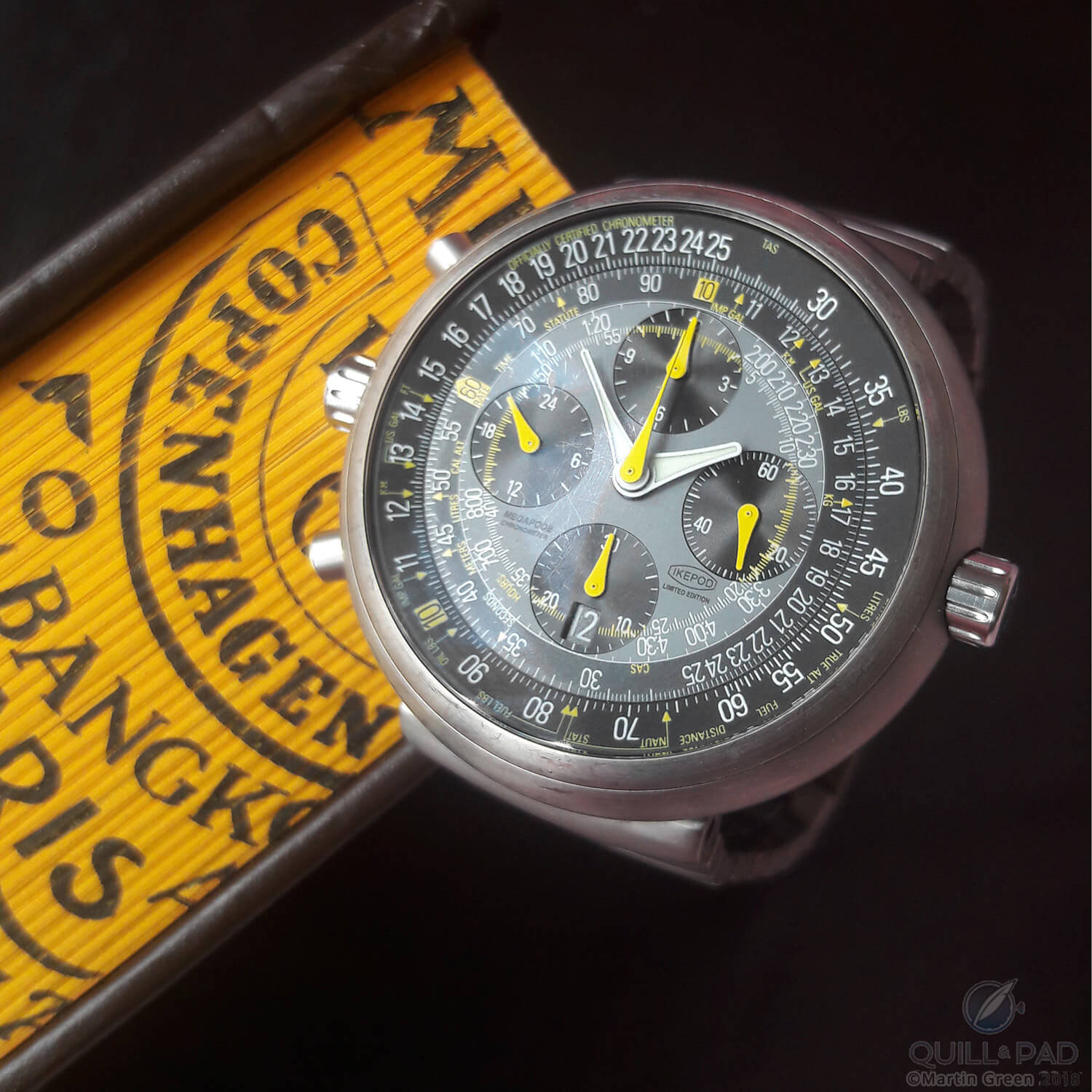 What is interesting about Ikepod is that all of the watches during its heyday were limited editions. This Megapode was part of an edition of 9,999 watches  ̶  per dial color. As Ikepod never had a very large retailer network, and its prices still required a substantial investment for most people, I always wondered if the company sold that many of them.

While even pre-owned Ikepods are only found in limited supply, I do see a great variety of serial numbers on them, including some very high ones, indicating that they might have sold quite decently.

That by itself is surprising, as commercially Ikepod has known great ups and downs over its many lives. The brand was often saved from the edge of bankruptcy by yet another owner willing to put money and effort into resurrecting what was still a unique brand. 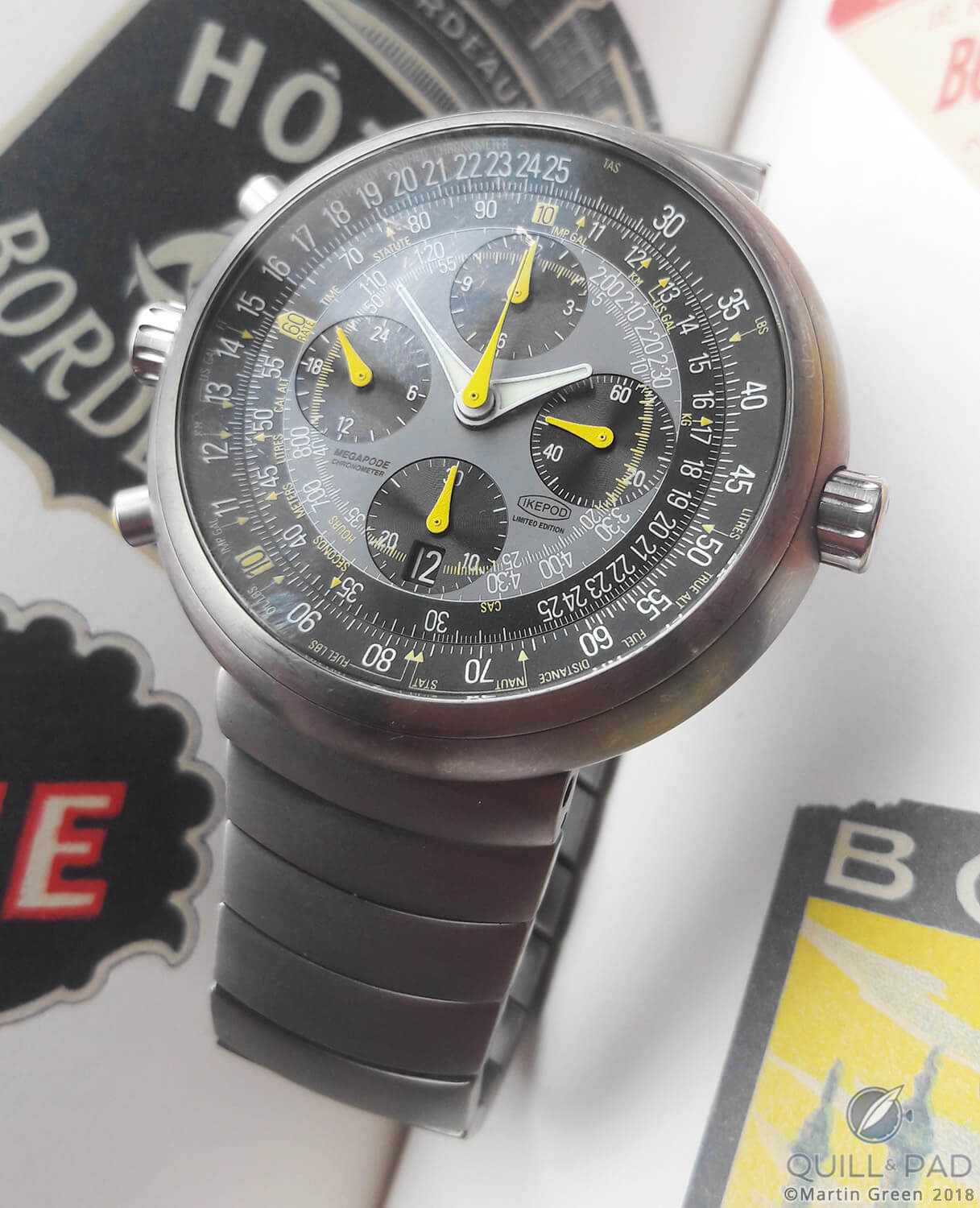 Newson himself called it quits in 2012, and while the brand may seem currently dormant, behind the scenes there is a lot of work going on to relaunch it later this year under a new owner.

I can only hope that under its new stewards Ikepod will again find success as it remains a beautiful brand with unique watches, full of character without neglecting functionality.

* This article was first published on April 18, 2018 at Ikepod Megapode: Marc Newson’s Smartest Watch (And Perhaps My Smartest Rolex Trade).

Ikepod: Just Another Mystical Phoenix-Burns-In-Fire-Then-Reborn-Better-Than-Ever Story. Except That This One Is True

Glass, Nostalgia, And The Ikepod Hourglass

Why I Pimped My Rolex – Reprise