Incredible Porcelain Clocks In And From Meissen, Germany

How much of the following describes you? I am fond of ostentation, splendor, decadence, collecting, kitsch, fine arts, opulence, beauty, decorative items, and/or craftsmanship.

Have you ever thought about a classic mechanical clock or porcelain “made in Germany” or “ made in Meissen?”

According to historians, most of these characteristics would probably have applied to Augustus II the Strong (1670–1733), elector of Saxony and later king of Poland. Augustus – a real super collector in the truest sense of the word – had amassed so many objects to feed his passion that today several museums are necessary to show all of them.

Among his collections are many pieces of art, astronomic tools, scientific measuring instruments, clocks, and precious stones. Elector August was also significantly involved in the collection and even production of porcelain.

Art-interested visitors to Dresden are well-advised to visit August the Strong’s porcelain collection, which is part of the Saxon State Art Collections in Dresden. And anyone who has enjoyed that might also visit the famed porcelain collection in the city of Meissen, which is only 30 kilometers northwest of Dresden.

Here, passion for mechanical timepieces collides with passion for porcelain. Among the more than 2,000 pieces on show in the Meissen porcelain collection, there are permanently about 100 clocks in porcelain cases. One of the biggest is the “Angels and Arts” table clock, whose movement and dial are signed by Ernst Pfannschmidt. 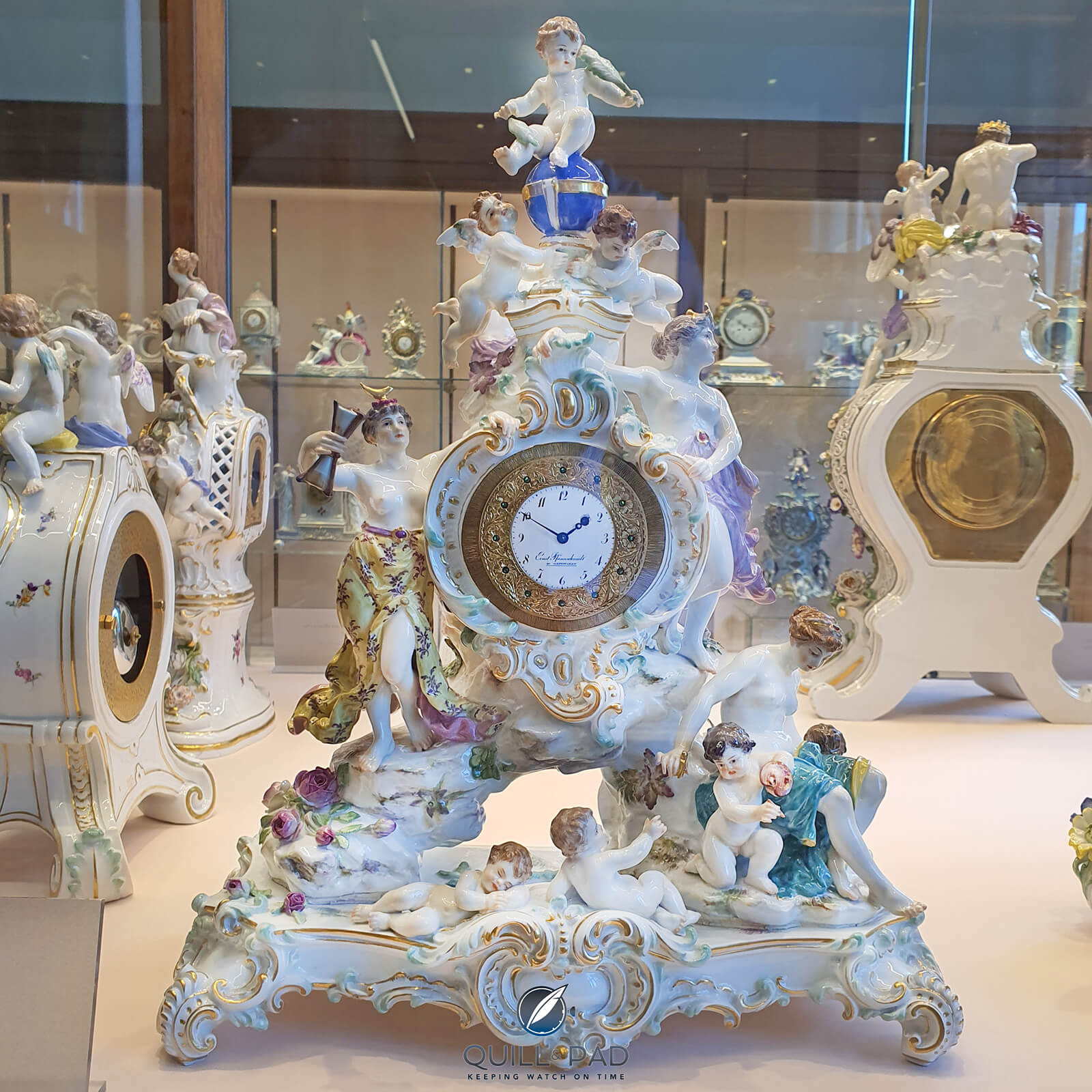 Meissen porcelain has existed since about 1708 and consists of a mixture of kaolinite (porcelain clay found near Meissen), feldspar, and quartz. During the manufacturing process it is fired twice: first at 900–1,000 degrees Celsius and then again at 1,100–1,500 degrees Celsius. This process is responsible for the porcelain’s characteristic shiny white and hard, but also fragile character. Typical for the manufacturing process is the shrinkage that results from the firing process, which causes the porcelain to shrink by about 16 percent. 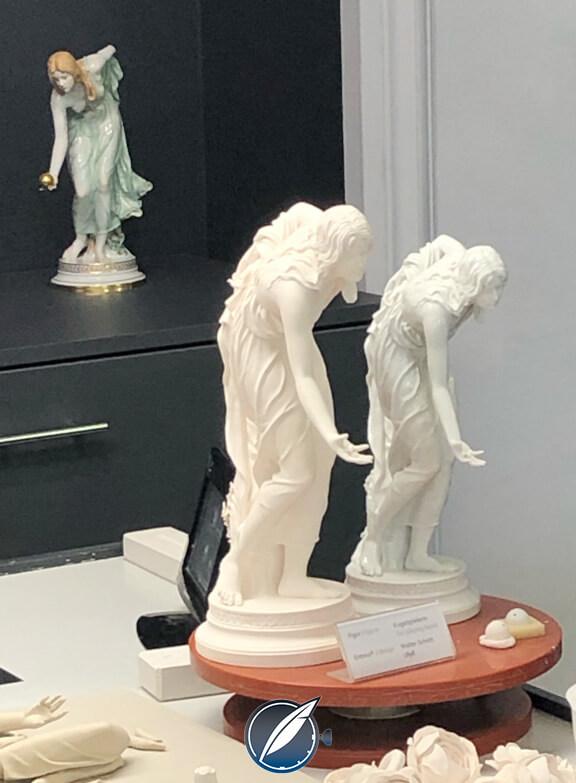 Double firing means that the porcelain piece can be made pure white or decorated in many colors, which can be either under or over the glaze. Decoration in Meissen is done using more than 600 special colors as well as precious metals and it is executed by trained porcelain painters. Porcelain is highly fragile and very expensive, but it is a craft par excellence.

As a child I did not always know that as the many broken items my parents had to pay for unfortunately testify. Small mechanical porcelain table clocks typically resided in most living rooms of middle-class European households as recently as last century. 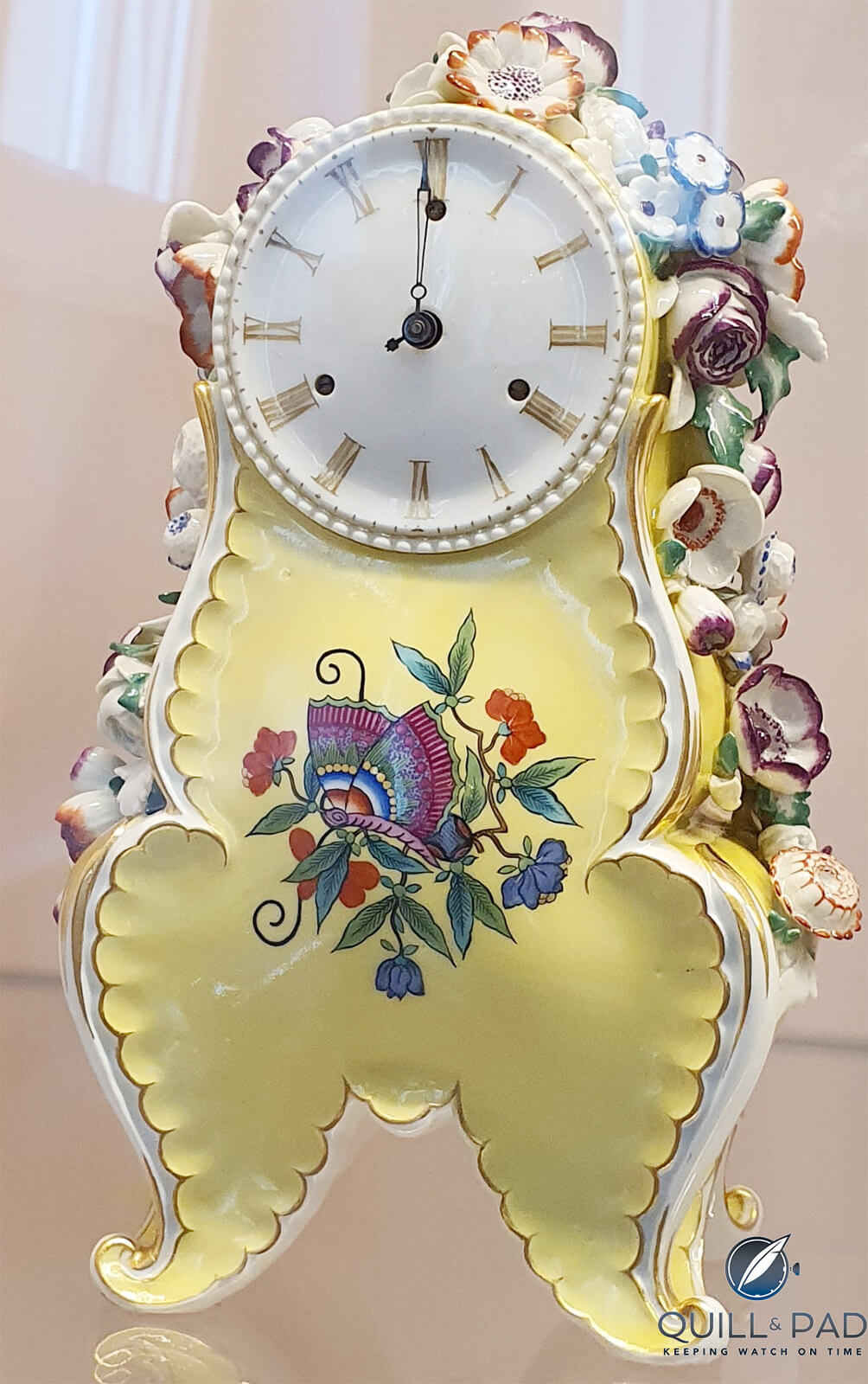 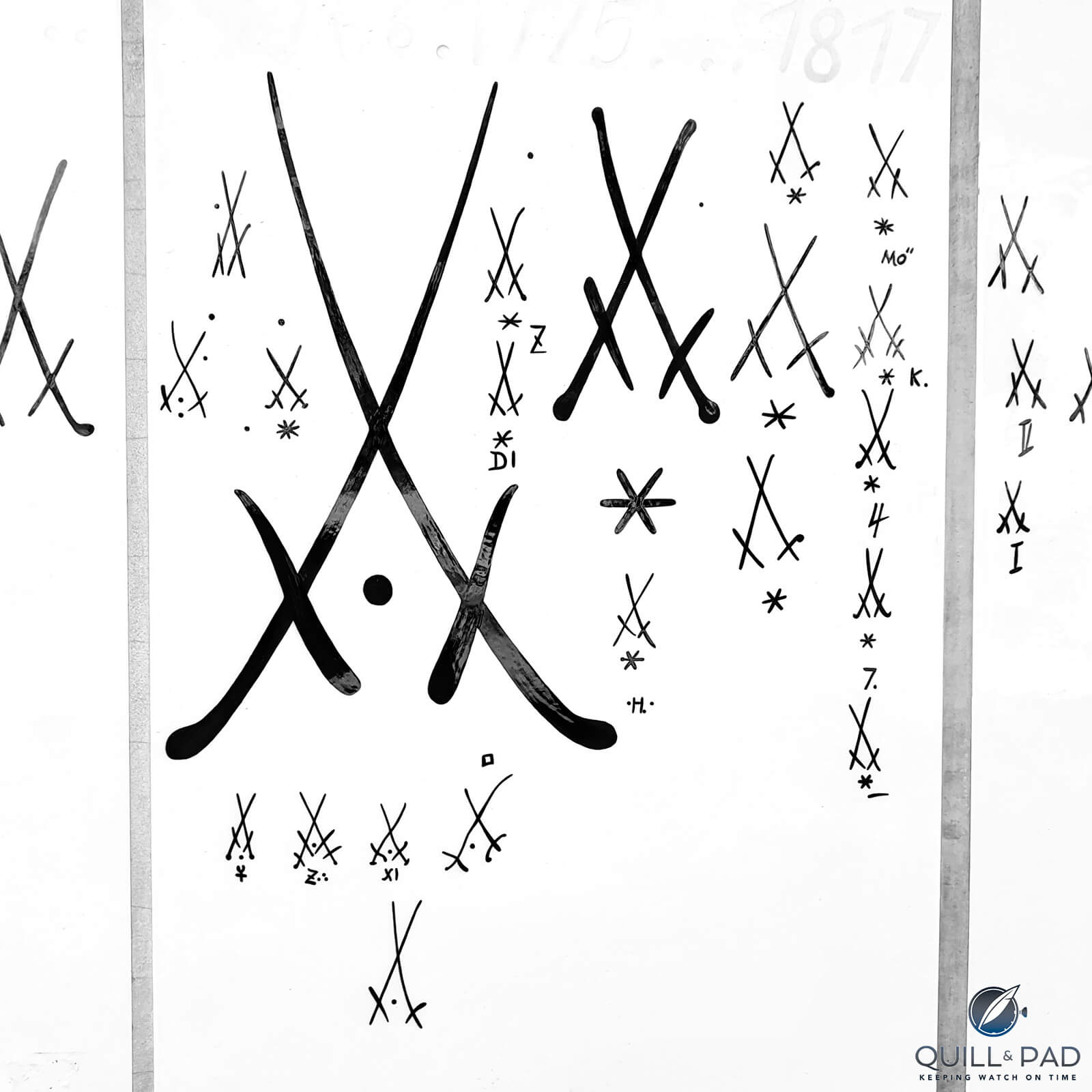 Famed crossed swords of Meissen, hallmark of the Meissen brand as seen on a tile outside the Meissen factory (photo courtesy Thomas Brechtel)

To this day, the Meissen manufactory continues to produces a variety of porcelain products. Since the beginning, numerous famous porcelain embossers, sculptors, artists, and painters have left their marks on this brand – such as Johann Gottlieb Kirchner (sculptor) and Johann Gregorius Höroldt (porcelain painter). 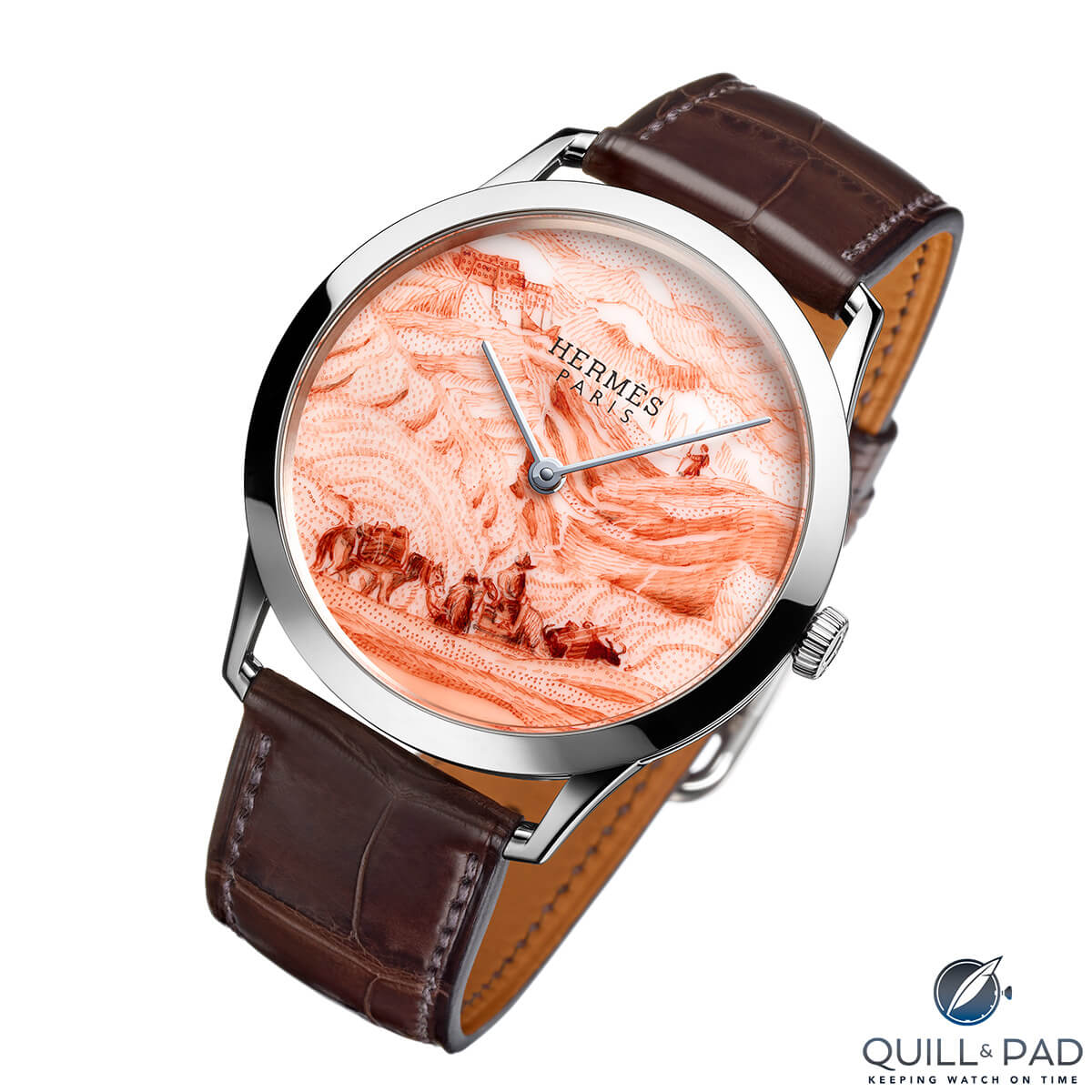 Some very famous artists and craftspeople worked for Meissen in the service of porcelain clock cases, among them artist and sculptor Emil Paul Börner and medalist Johann Joachim Kaendler. The collection, which exhibits more than 200 years of artistic craft, also contains pieces by Johann Daniel Schöne, Christian Gottfried Jüchtzer, and Peter Reinicke. For those with the wish to see famous names and prominent masters on the dials of antique clocks or watches, such masters can also be found in the collection of porcelain clocks of the Meissen manufactory. There are, for example, several beautiful clocks with dials signed by Breguet, Paris in porcelain cases with animal motifs by Johann Joachim Kändler, or in much more classical-looking cases by Michel Victor Acier. 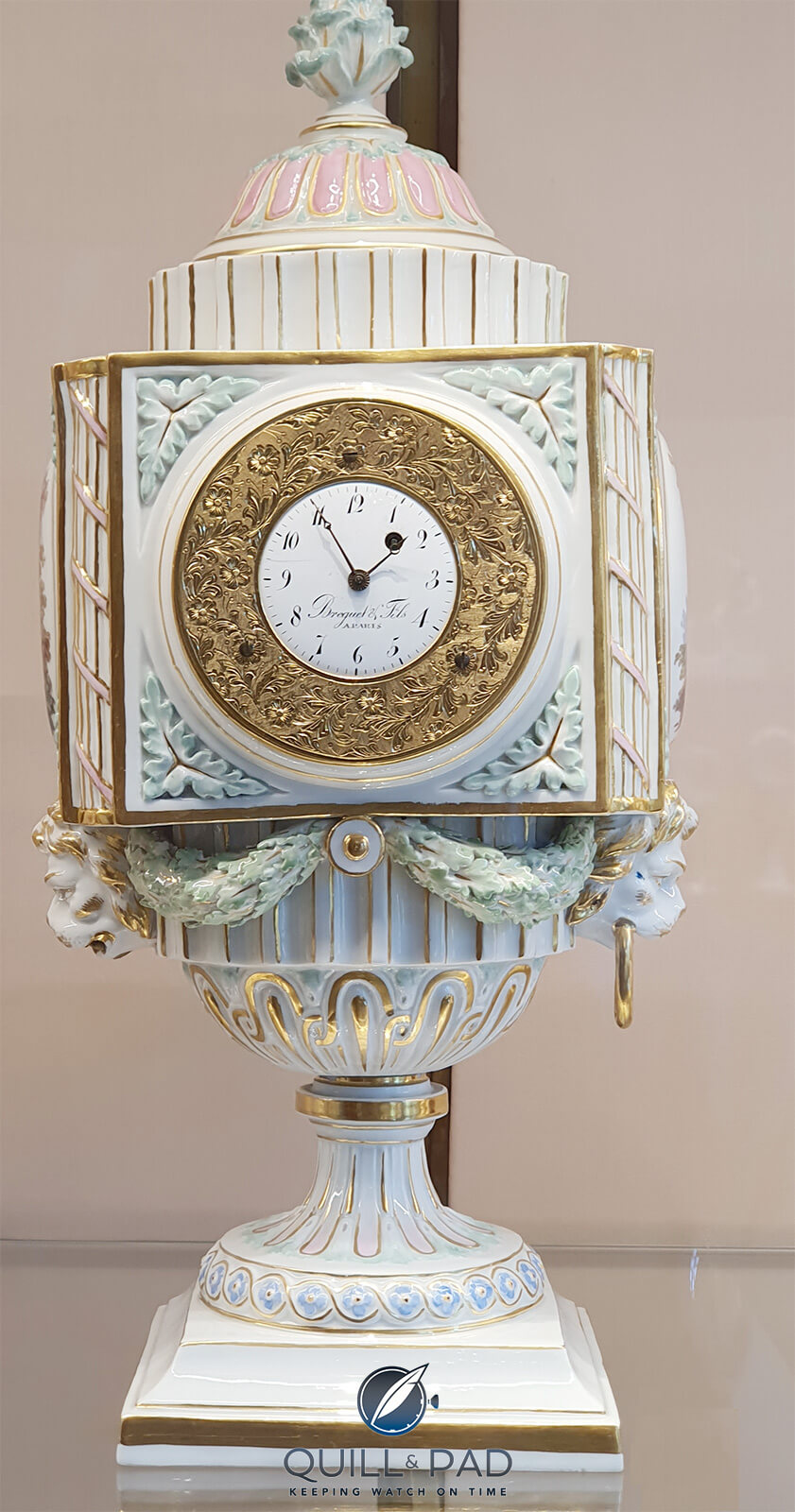 The beautiful clock with vase and pedestal made by Ludwig Eduard Martin shown below has an antique design that is characteristic of the late eighteenth century, which has a less playful, less ornate, and very classic style. The case is made of porcelain, the blue and gold decoration is over-glaze painting. Additionally, the case is decorated with gold leaf. The white dial has Roman numerals, a railway minute track, and Breguet-style hands. Very early, around 1720, the first artists were engaged in the design and manufacture of clock cases made of Meissen porcelain, like Johann Gottlieb Kirchner. Some of the clocks exhibited in the Meissen museum have cases that are very clean and undecorated, while other models are rather ornate with figures, scenery, and jewels so that the mechanical clock with its dial and movement and perhaps complication plays a more subordinate role.

Up to the twentieth century, the decoration of the clocks and their cases were completely in the foreground. Large clocks with porcelain cases fell into the collecting sphere and artistic taste of enthusiasts at royal courts and in aristocratic circles. Often they were given as valuable gifts.

The clock shown below by Johann Daniel Schöne and Christian Gottfried Jüchtzer is decorated with figures of the Greek muses Melpomene and her sister Thalia (tragedy and comedy) holding smiling and crying masks, the age-old symbol of theater. These two characters belong to the group of inspiring muses of art and science. The museum’s collection both includes table clocks with built-in movements and decorative objects such as the small stand below made to hold an antique pocket watch. Made by Peter Reinicke in about 1747, could it be depicting “Father Time?” 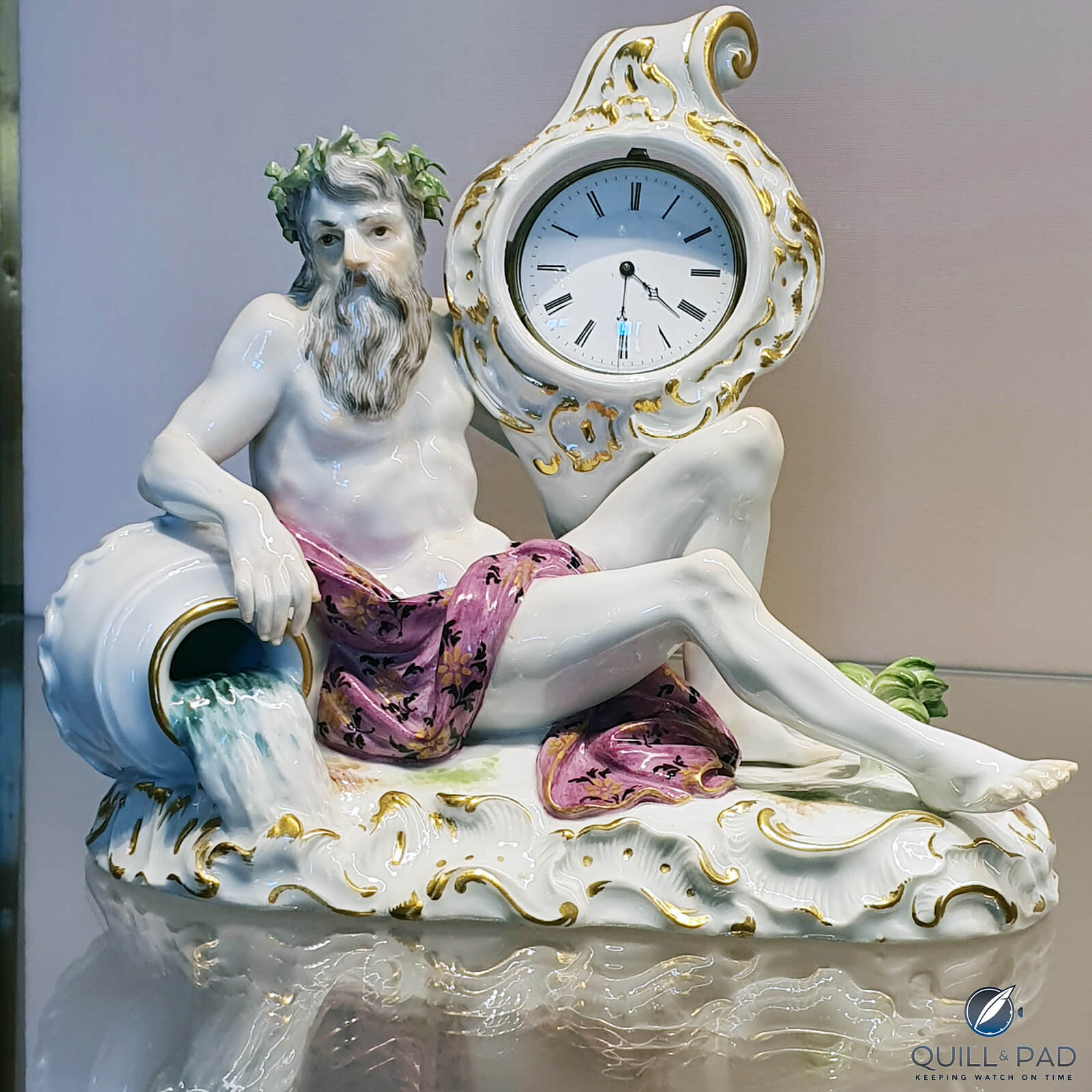 A Meissen watch stand with figure by Peter Reinicke, about 1747 (recast of the original model made about 1860) (photo courtesy Thomas Brechtel)

Porcelain clocks are available even today

The timepiece below showing the figure of a huntress and and her dog is a mantel clock from the current production of porcelain clocks of the Meissen workshop. It is a recast of an original piece designed by Paul Scheurich from the year 1937 and has an eight-day manual-wind movement. It is made in a limited edition. What about the opening questions?

I confess that I appreciate the splendor, fine arts, opulence, beauty, and craftsmanship of clocks. Before visiting the collection in Meissen, though, I was not aware that clocks in cases made of porcelain even existed. I don’t usually get too excited when I see a well-known and spectacular clock or watch, but do when I see things I have never seen before.

Which is why I am grateful to the August the Strong’s collecting frenzy. And to the Meissen museum and manufactory for maintaining its collection. Whether these clocks have a large community of enthusiasts, I couldn’t say. It may be that some see it more like W. C. Fields and may think: the clocks of this collection are like a majestic elephant – we look at him very gladly, but would not like to have him at home.