Astronomical phenomena lie at the very origin of time measurement. However, these celestial events are not only practical, they can also be very romantic as Jaeger-LeCoultre demonstrates with its latest beauties: Rendez-Vous Star and Rendez-Vous Dazzling Star. 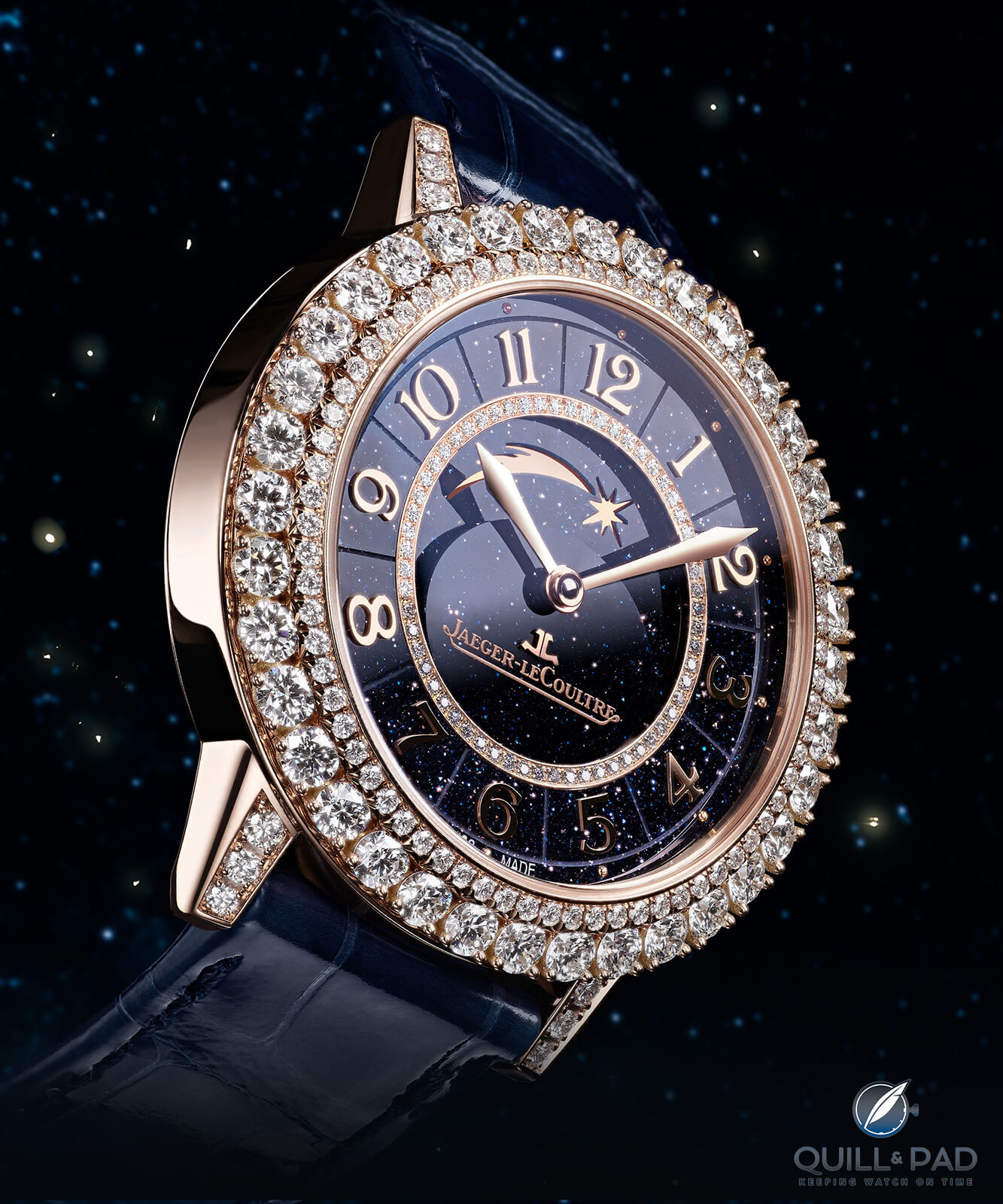 The “watchmaker’s watchmaker,” uses a heavenly anomaly to enchant: the unpredictability of the shooting star. The erratic meteors that shoot across clear night skies fill our hearts with wonder, and the Le Sentier-based manufacture has managed to recreate this in miniature. It fills us with the same emotion when we see the dials of these oeuvres as we experience when we see a “star” shooting across the heavens. 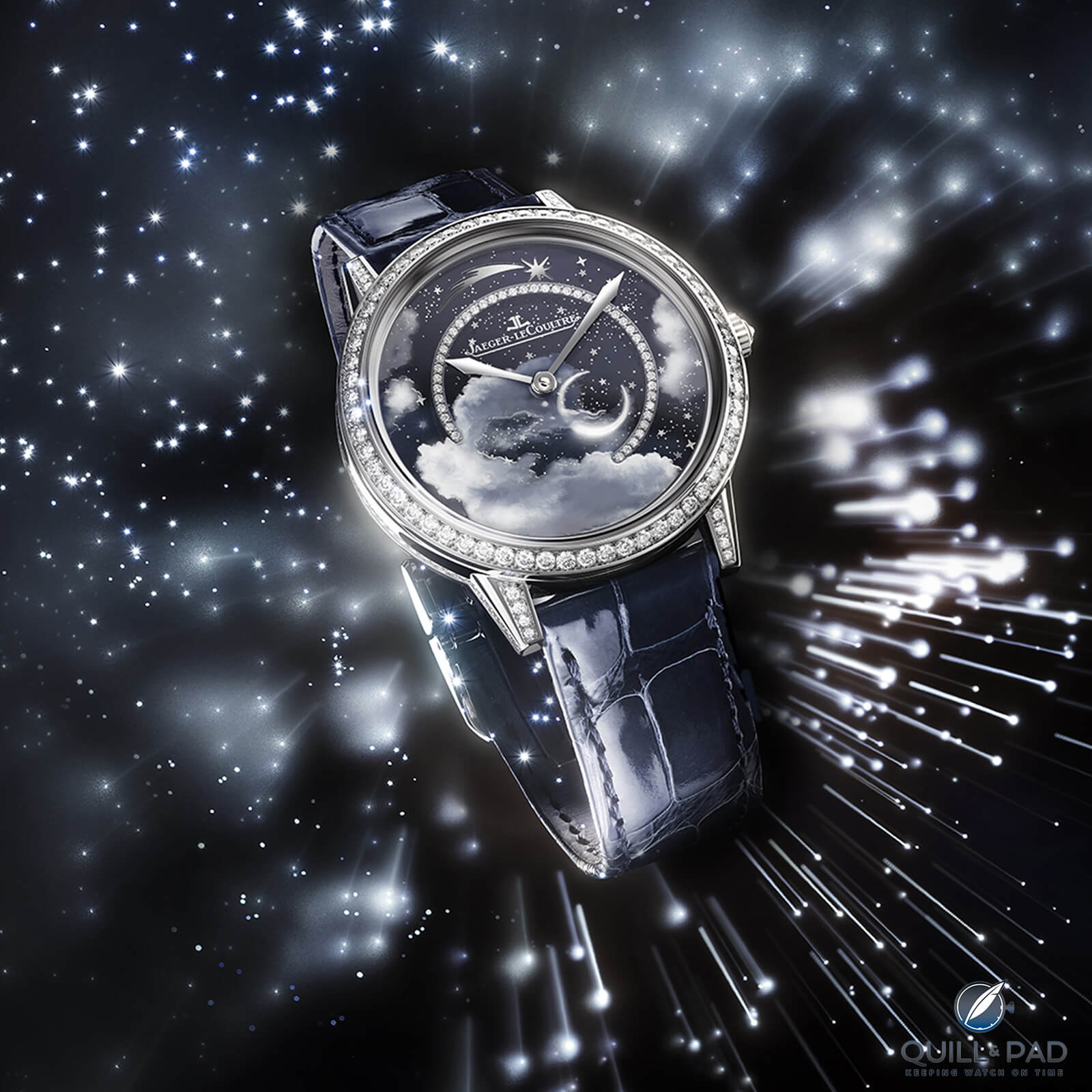 These two new timepieces from Jaeger-LeCoultre’s lovingly redesigned Rendez-Vous collection were quite difficult to create as the brand’s product design director Lionel Favre revealed in an interview.

Jaeger-LeCoultre Rendez-Vous Star and Dazzling Star: the mechanics of Caliber 734

The Rendez-Vous Stars are small masterpieces of technical and artistic savoir-faire that recreate the enchanting celestial event that is a shooting star thanks to an entirely new invention that is activated by the movement of the wrist – the same way the watch is wound, in fact. 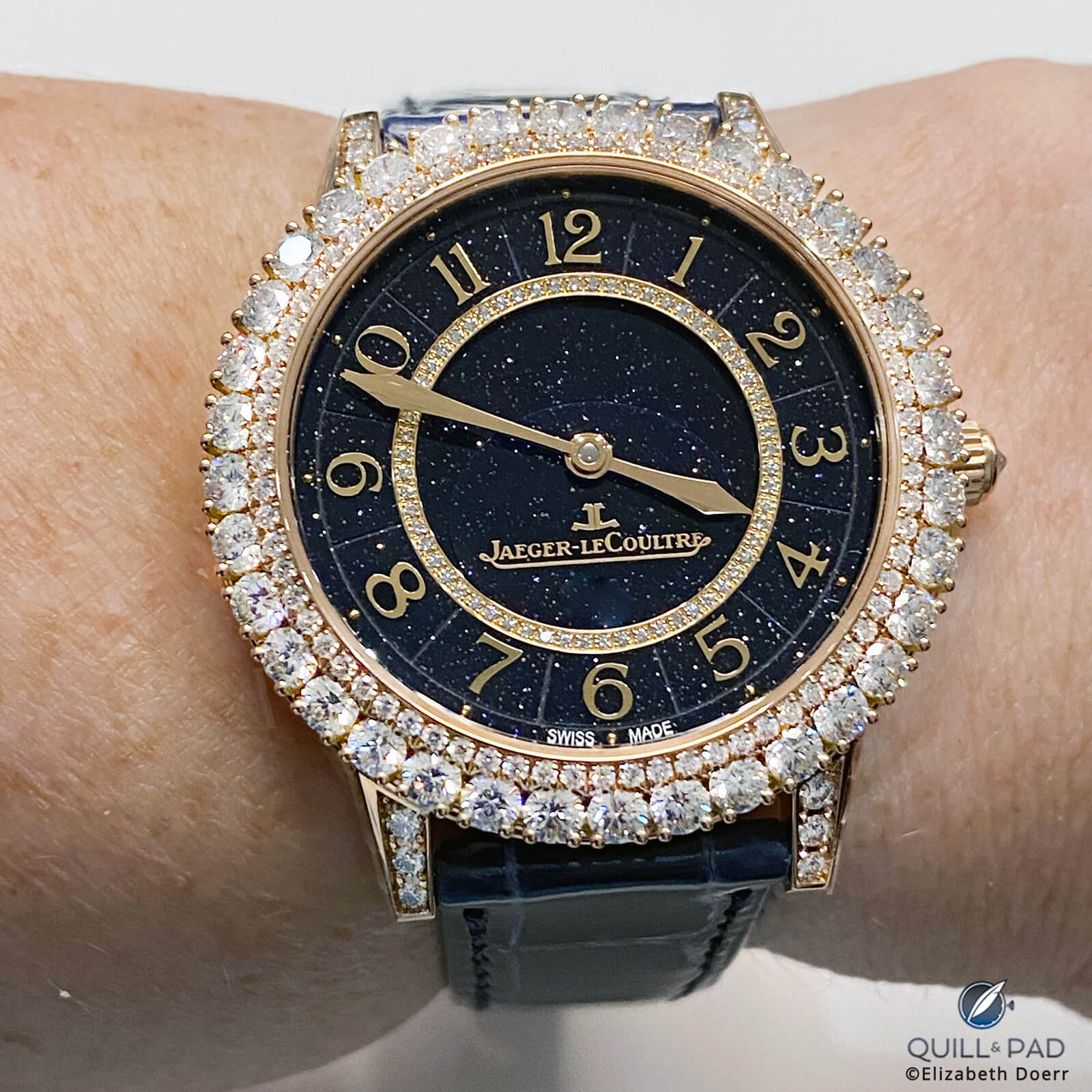 The shooting star appears on the dial just under 12 o’clock at random moments, usually four to six times per hour, for ten seconds each time. Its unpredictability makes it even more enjoyable as the enchanting display entices the viewer not to look away.

“To provoke this feeling of luck, the sighting of the star must be rare,” Favre, who came to Jaeger-LeCoultre by way of Chopard then Roger Dubuis, explained.

Jaeger-LeCoultre Caliber 734 is based on the Caliber 899 base movement, which takes care of the timekeeping functionality, while a very thin but complicated module that includes a regulator – a component for regulating energy usually found in minute repeaters – creates the random motion of the heavenly element.

The shooting star is linked to the motion of the rotor, it’s so the wearer’s wrist that makes the star launch across the dial. The regulator manages the inflow of energy from the rotor through the gear train to allow the star to cross the dial in a ten-second period (and not faster). The mechanical solution is quite novel.

“Randomness” is not possible to recreate in the gears and springs of a watch movement, which are based on principles of physics. So it took the Jaeger-LeCoultre team, who specifically looked to create a new complication based on the starry sky, almost three years to perfect this system for the creative pair of watches.

Favre and his team were inspired by the beauty of the celestial night sky, but as they delved into what became a passion project they found that these two watches were more inspired by emotion, with chance playing a large part. “The moment of happiness that you have when you see a shooting star is the feeling we were aiming for,” Favre said. “It needs to be rare, like when you see a shooting star in the sky.”

The shooting star mechanism, which moves the star across the dial thanks to a complex combination of the motion of three aventurine disks, may also be summoned on demand by turning the winding crown several times.

These two watches were made right from the beginning with women in mind, Favre confirmed. “We have a habit of making useful complications,” he added. “Here we wanted a new complication able to create an emotion.” And create an emotion it did – I was immediately enchanted during Watches and Wonders 2022 when I saw these incredible timepieces.

The visuals of these two watches are nothing short of striking. Especially the Rendez-Vous Dazzling Star, whose 36 mm 18-karat pink gold case is embellished with 36 brilliant-cut diamonds set in place using the prong (griffe) setting, which adds a higher degree of sparkle. A classical jewelry technique introduced in Jaeger-LeCoultre’s Rendez-Vous collection in 2019, it remains an exquisite testament to the brand’s gem-setting expertise. Fine gold claws hold the diamonds high, allowing light to pass through them from every angle and maximizing the presence of each stone while minimizing visible metal. A second row of smaller diamonds held in place using the descendeur setting style animates the watch immensely.

“This is a very refined detail,” Favre said of the two rows of diamond setting that play with opposition. As a high jewelry designer in the past, he now keeps a watchful eye on the originality and composition of jewelry watches at Jaeger-LeCoultre. 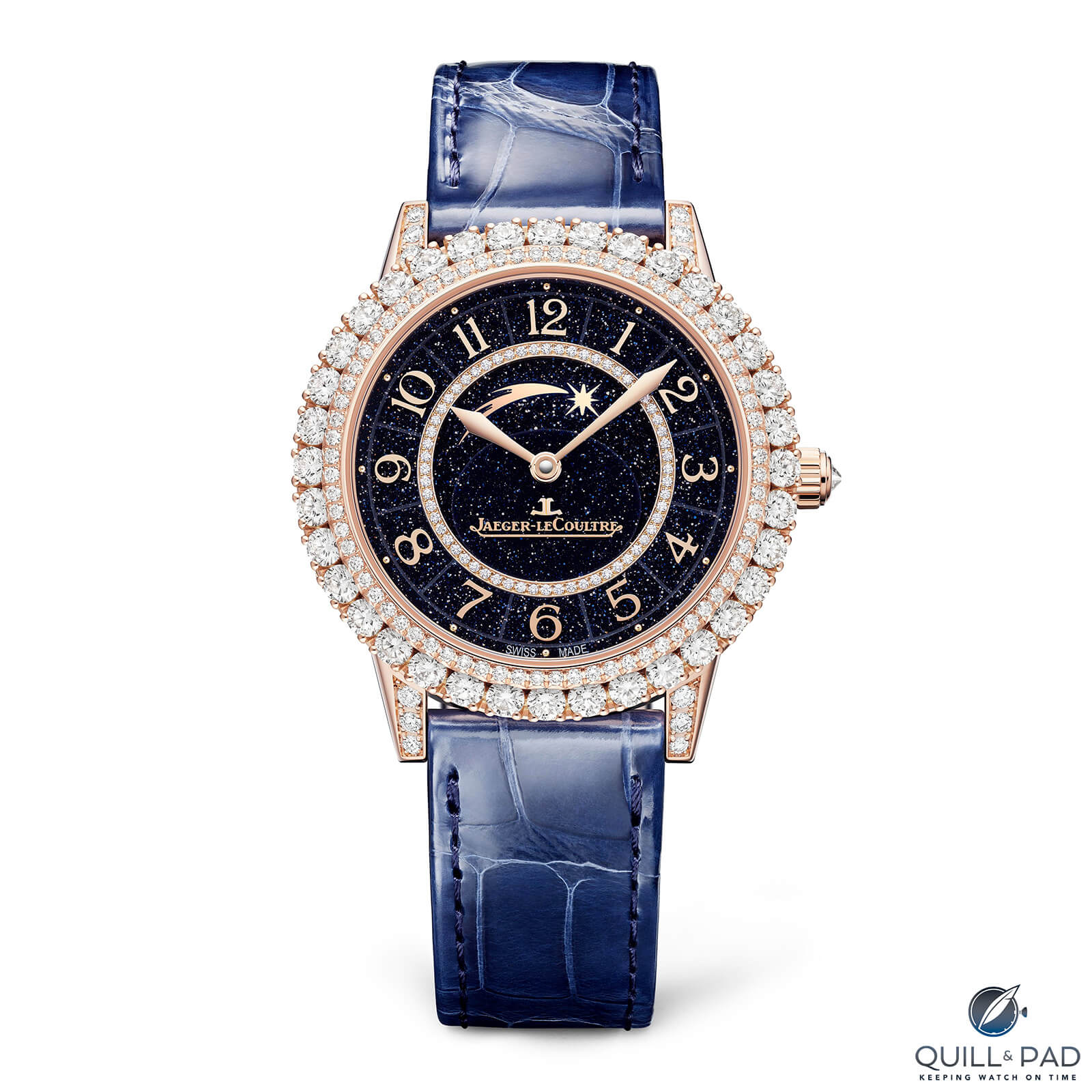 “Having small diamonds and large diamonds together makes the reflection different, and the different types of settings – griffe for the larger and descendeur for the smaller – create interest. Descendeur setting, with engraving on the side, provides a fully different feeling,” he patiently explained. “When you put them together, one highlights the other. It’s a question of feel. If we had used only the griffe setting, the piece would have looked a lot more vintage; the second row provides more modernity.

The upper surfaces of the lugs are also set with dazzling gemstones, and an inverted diamond is set into the crown. The Rendez-Vous Dazzling Star’s three-part dial is made of sparkling aventurine glass, recreating the night sky.

Jaeger-LeCoultre’s Rendez-Vous Star (below) is a masterful example of rare craft work using miniature painting, the art of realistically reproducing an artwork in miniature. Here the artisans used lacquer to achieve an aquarelle look for transparency on sapphire crystal over the aventurine disks. “We wanted clouds and a foggy atmosphere,” said Favre, “so we had the idea to create different levels.” The three sapphire crystal disks give the visuals of this watch amazing depth and beauty but also make it complicated to manufacture. One particularly difficult but novel idea was to set a three-quarter circle of diamonds directly into the sapphire crystal using UV glue.

The real pleasure, however, lies in the anticipation of catching sight of the mechanically driven shooting star in the night sky. For owners of the Jaeger-LeCoultre Rendez-Vous Star and Dazzling Star, this anticipation must feel much the same: there is no better way to pass the time than staring at one of these tiny masterpieces in the hopes of catching the fickle comet traveling across the dial.

Aventurine: Sparkling, Glittering, Mysterious, And Placing A Galaxy Of Stars On Your Wrist

Watch Collecting Regrets? I’ve Had A Few, But Not Too Few To Mention: They Include Selling Too Soon And Failing To Buy – Reprise