Brace yourselves for a weird one because today’s journey takes us well beyond the mainstream – even by indie-brand standards. Jérôme de Witt isn’t a name often mentioned alongside the François-Paul Journes (1999), Stephen Forseys (2004), or Hajime Asaokas (2005) of the world. But he’s been at it just as long.

And Jérôme de Witt is a colorful character – even by indie-brand standards.

As of November 2022, the front page of De Witt’s website modestly bills the founder as “descendant of Emperor Napoleon and King Leopold I of Belgium.” Lest there be any confusion, that’s Napoleon Bonaparte, not the ill-fated pretender Napoleon III. Still not hip? That’s okay because clarity is only one mouse-click away: “Owning a De Witt watch means owning a Napoleon watch.” Cool!

The De Witt operation grew out of former Chopard jeweler/watchmaker Cédric Johner’s original company, which had launched in 1997. Today’s De Witt watch enterprise effectively emerged from a fraught 2003 rebranding of the Johner operation. After much legal wrangling and recriminations, Johner lost the right to use his name for several years, leaving de Witt – like Napoleon – in control of the field.

Jérôme de Witt was an original partner in what is now F.P. Journe’s Les Cadraniers de Genève dial factory and he has relocated and retooled his eponymous manufacture several times within the Geneva city limits. Now that we’re up to speed, let’s jump straight to 2015 and the launch of De Witt’s Academia Mathematical. 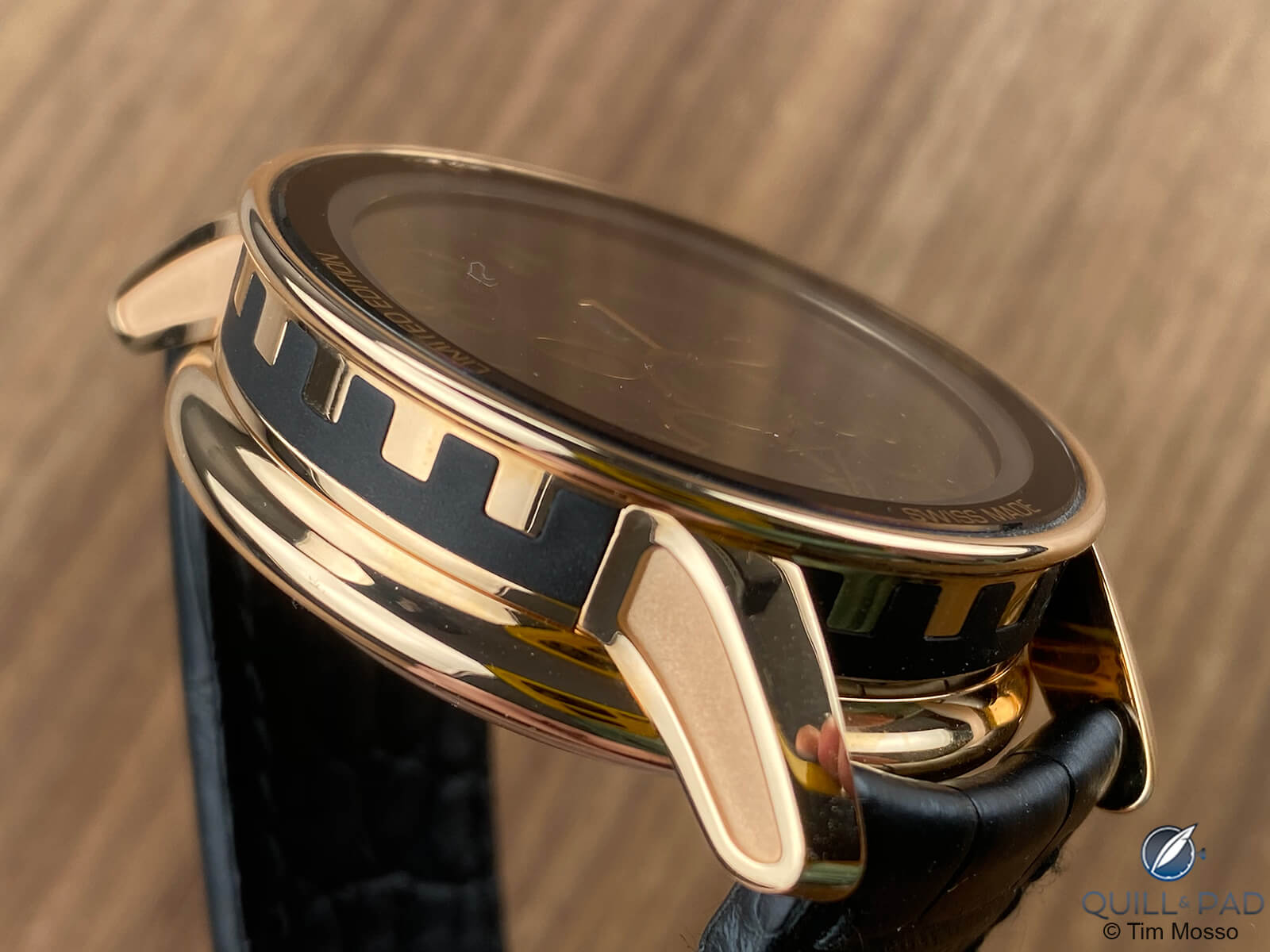 At De Witt, “Academia” is a collection and “Mathematical” is the model. Like the F.P. Journe Vagabondage II and A. Lange & Söhne’s Zeitwerk, the Mathematical is a digital time display with jumping hours, tens of minutes, and minutes. The Mathematical leaves its full numeral carousels visible at once under a transparent smoked sapphire crystal dial. Subtly cut windows in the sapphire crystal highlight the current hour and minute while leaving the whirling wheels of time fully revealed. Hours sit at the top, and minutes reside in the center.

While analog digital displays have become a sub-genre of fine watchmaking in the years since the Harry Winston Opus 3 started the party in earnest, the Mathematical offers an original vision of this style. Virtually all other digital time concepts strive to place the numerals in a co-planar arrangement, but this De Witt plays up the staggered depth of its displays. The diminishing size and plane of each digit imparts an extra dimension rare on this style of watch. 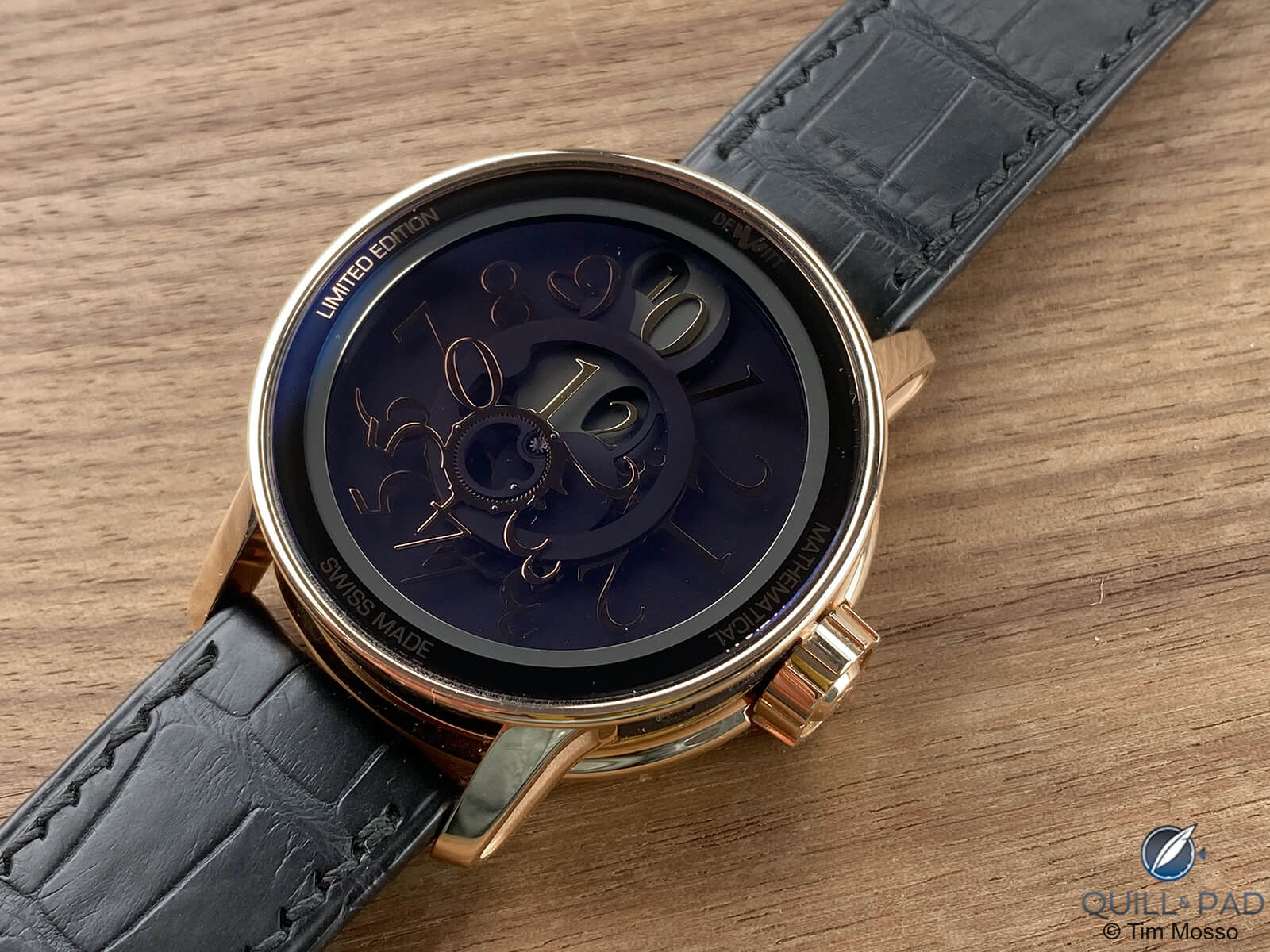 Despite the visibility of the numeral wheels underpinning the displays, few of the actuating mechanisms driving the wheels are apparent. This is an impressive achievement that reveals enough detail to intrigue but not enough to spoil the illusion of floating numbers. The result is a unique and ethereal appearance with some of the occulted intrigue of a vintage mystery dial.

Unlike better-known digital watches, the Mathematical features an automatic movement for increased daily practicality. De Witt – the brand – makes parts of this mechanism itself, and the work is credible.

The basic tractor caliber is derived from a proprietary design released by De Witt for the 2015 model year and intended for use with complications. It employs a unidirectional system for optimized winding efficiency, and the handsome variable-inertia balance benefits from the stability of a free-sprung regulator. Forty-eight hours of power reserve is admirable given the energy-intensive display, and most digital mechanical watches come nowhere near this level of autonomy. 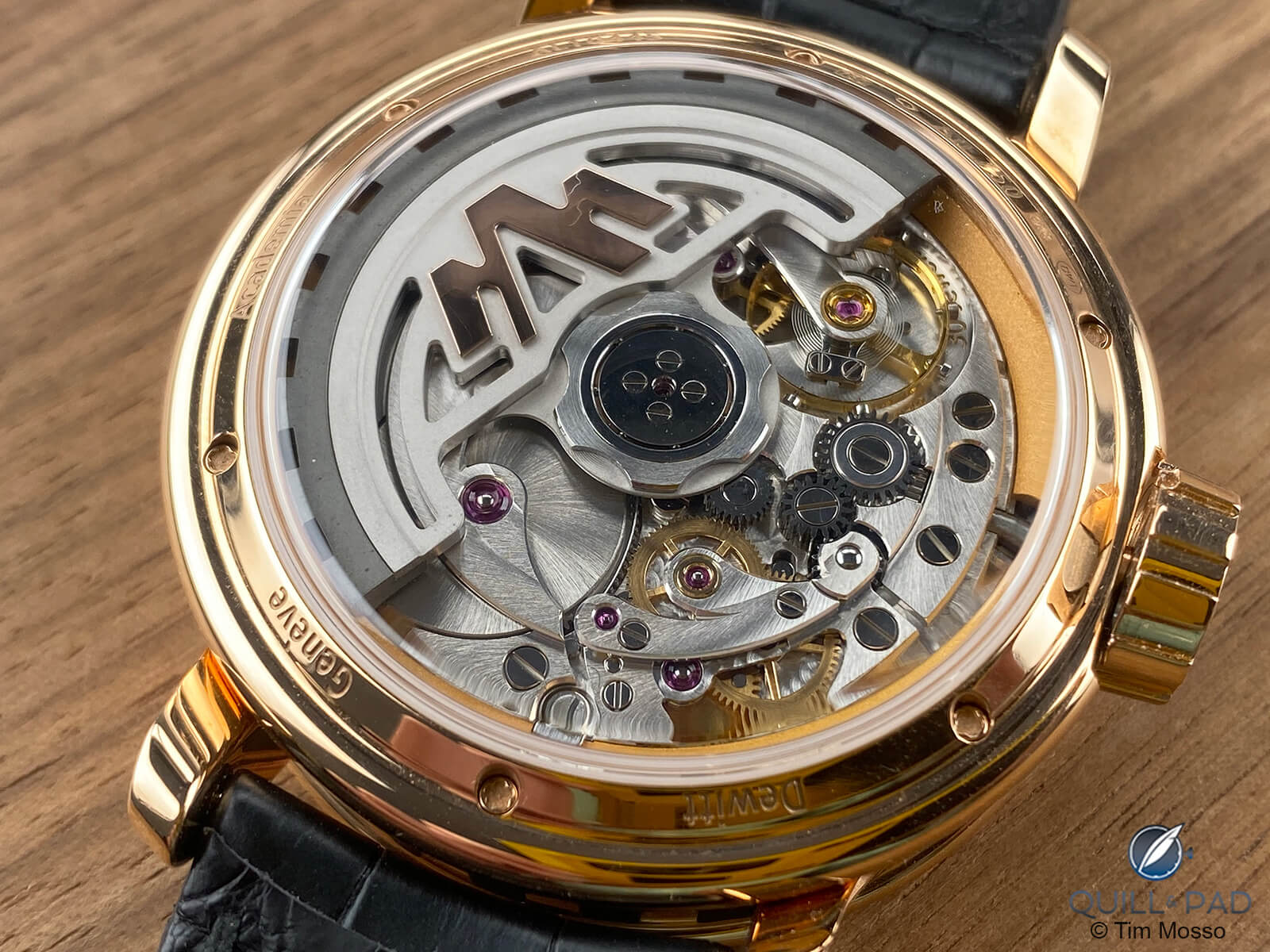 Finish is impressive. It’s not Romain Gauthier level, but the F.P. Journes, Audemars Piguets, and Jaeger-LeCoultres of the world generally do no better. Bevels appear to be started mechanically and finished manually – likely with a hand-held buffing tool. An ambitious number of bevels feature sharp inward creases, which are a pleasure to encounter. The barrel is solarized beautifully, and all screws are black polished. Locating pins used to align bridges with the base plate feature carefully polished heads – a signature of top-grade execution. 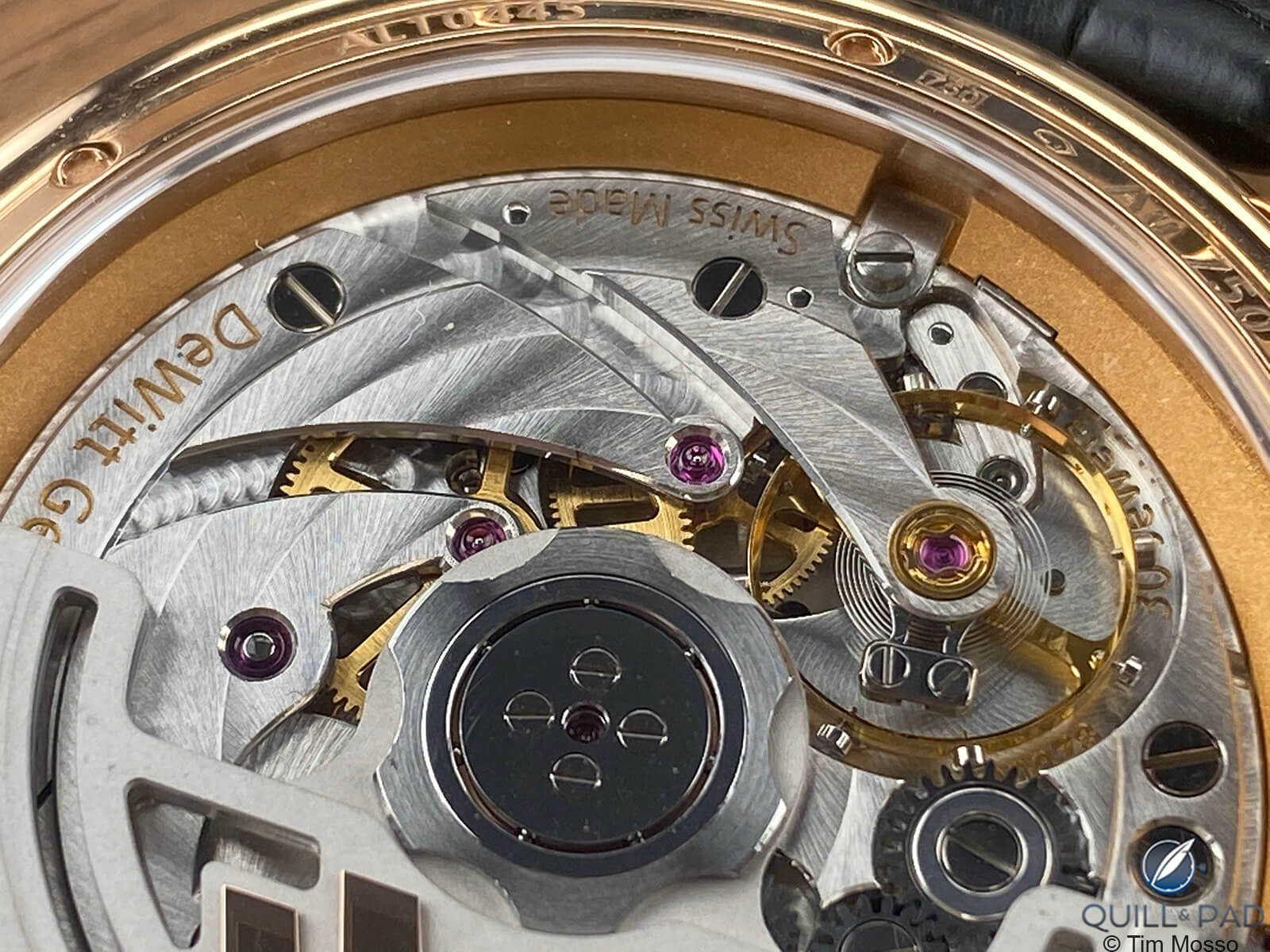 Architecture is outstanding, and the physical arrangement of bridges is thoughtful, revealing, and memorable. Although somewhat obscured by the winding wheel, this ranks among the upper-echelon of appeal for center-rotor automatics.

If this movement has one clear shortcoming, it’s the relative lack of size in proportion to the case. A 42.5 mm watch needs a large movement to match, and De Witt had years to ensure this caliber would be suited to its intended vessels. At 30.6 mm in diameter, the 384-piece De Witt automatic is midsized by industry standards, but it’s clearly undersized for this application. 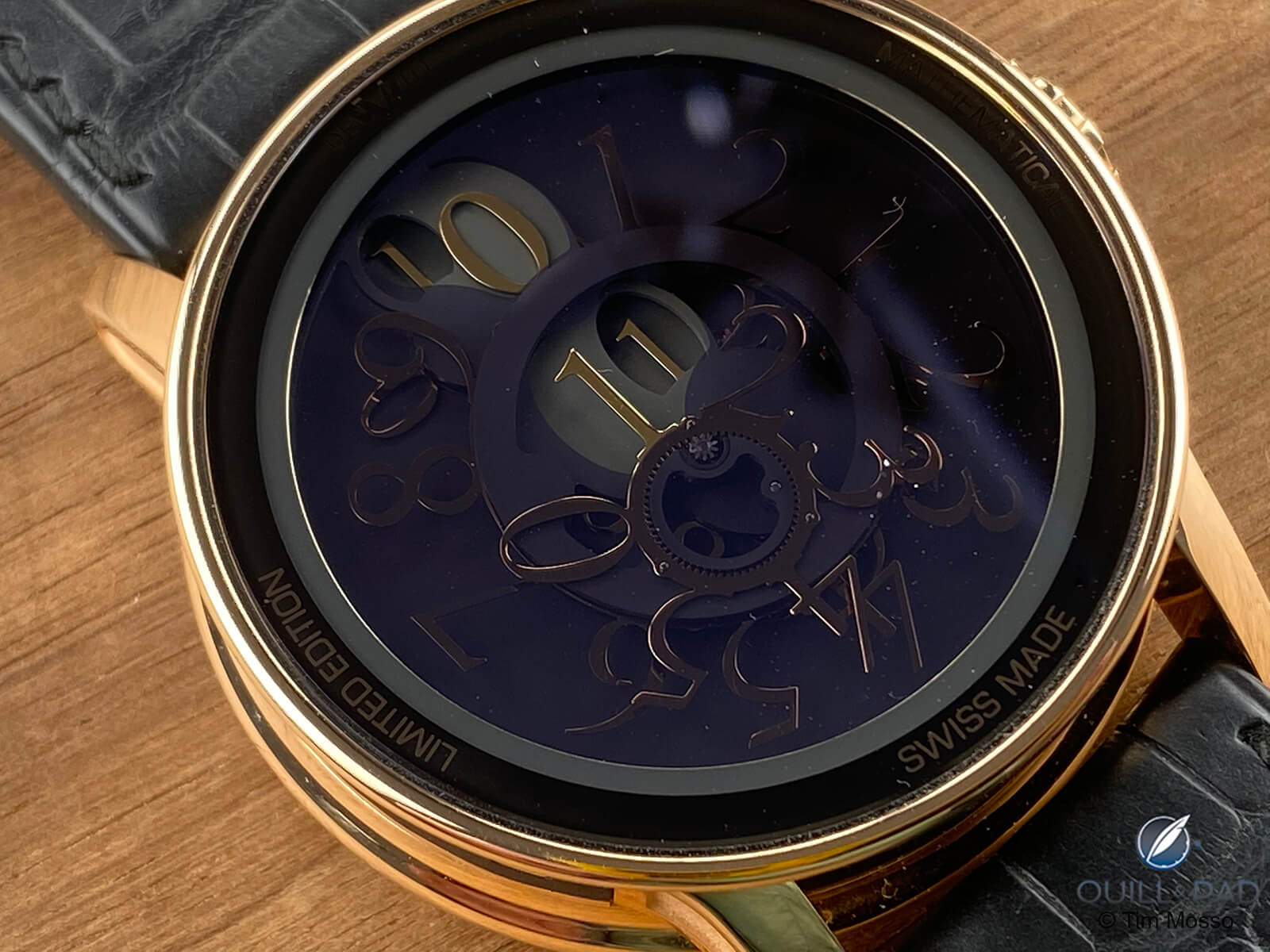 Setting the Academia Mathematical is something of a literacy test for watch collectors.

This isn’t a panzer-like Lange Zeitwerk L043 that tolerates race-pace setting of the time. The De Witt is a true piece of cottage horology that requires a slow hand versed in the realities of indie-brand hardware. It’s like shifting a pre-synchromesh gearbox from a 1930s Duesenberg: do it slowly and with a firm hand.

Get it right and the Mathematical rewards competence with a pleasingly mechanical “cogging” sensation through the tip of your fingers. Get it wrong and it can be necessary to back off, release pressure, and start again.

This watch’s lugs are short but strong; their profiles are hollow and sandblasted. The case back flares dramatically to create the impression that the watch is sitting on a platform. Plan on at least a 16-centimeter wrist to wear this one with conviction; the bigger the wrist, the better the fit. 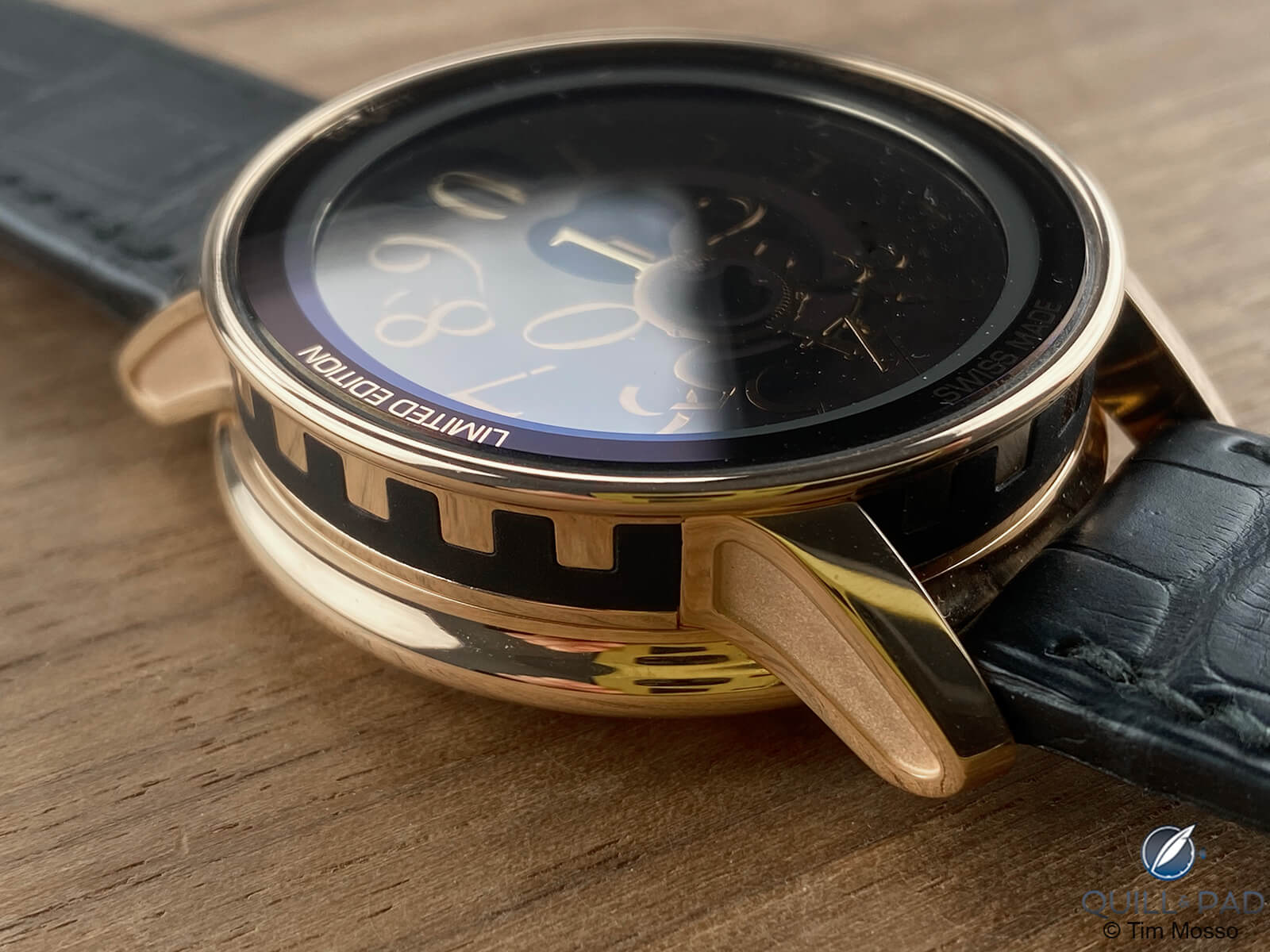 At 42.5 mm in diameter and almost 15 mm in height, the Mathematical is a large watch with an imposing presence. That commanding stance is accentuated by the De Witt house style, which incorporates a circumferential array of “imperial columns” girdling the case. Pink gold is the rule for this model, but black rubber inserts help to define the profiles of the “columns.”

De Witt moved away from the original Cédric Johner “Abyss” shape from 2005 onward, and the imperial column design has been in circulation since at least that year’s De Witt Differential Tourbillon. While the columnar design pays a sort of sideways homage to the imagery of imperial France, the actual shape recalls a snare drum of the type that might have paced Napoleon’s legions. 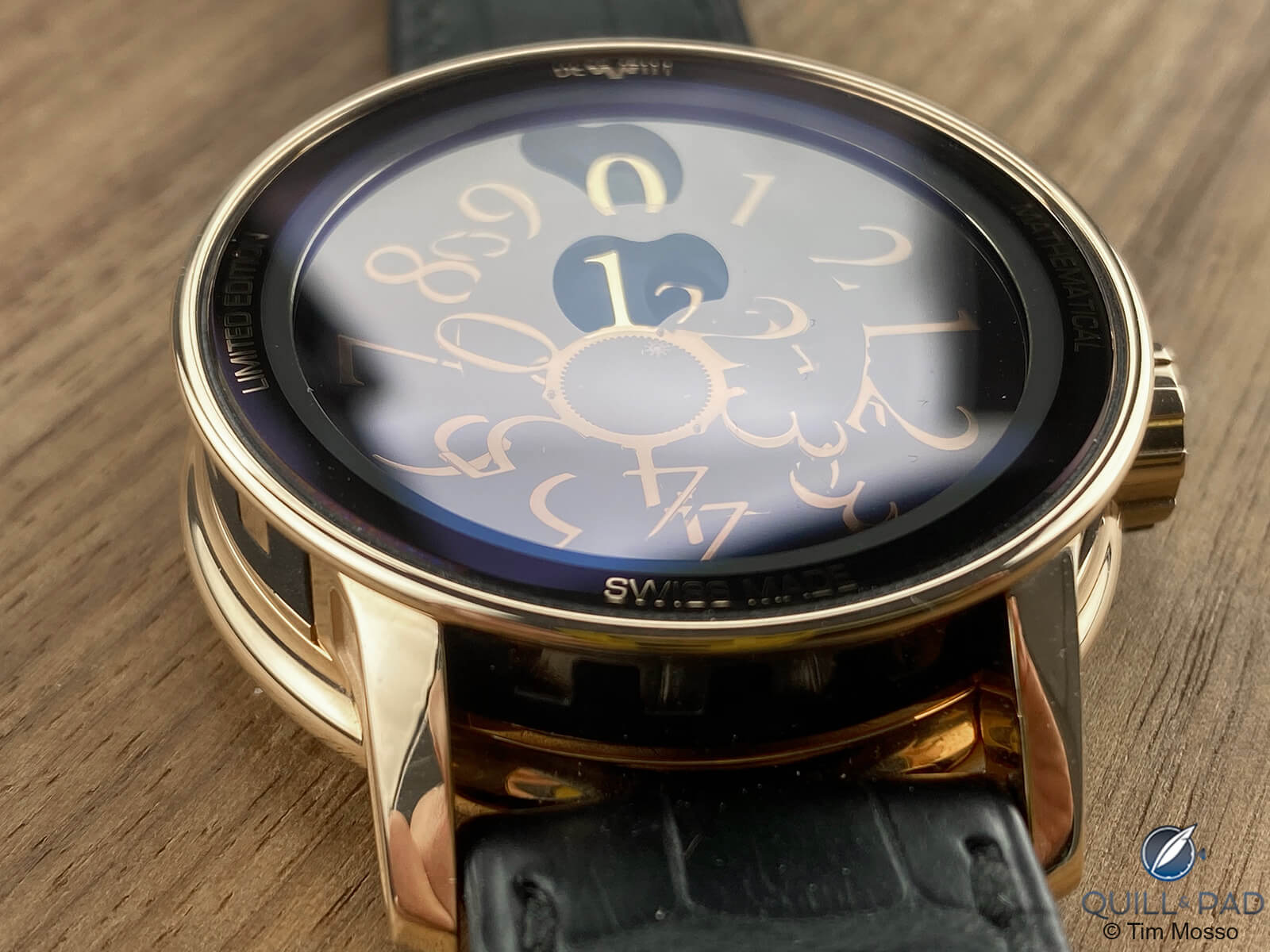 Frankly, the colonnade case is the least distinctive part of the Mathematical; all that’s unique is dial side. Cover the jumping numerals and there’s little to separate this flagship model from lesser ETA-powered De Witts. While those basic models have provided volume-selling foot soldiers, prestige complications like the Mathematical are the imperious leaders of De Witt’s horological “grande armée”; a bit more differentiation would help justify the price premium. 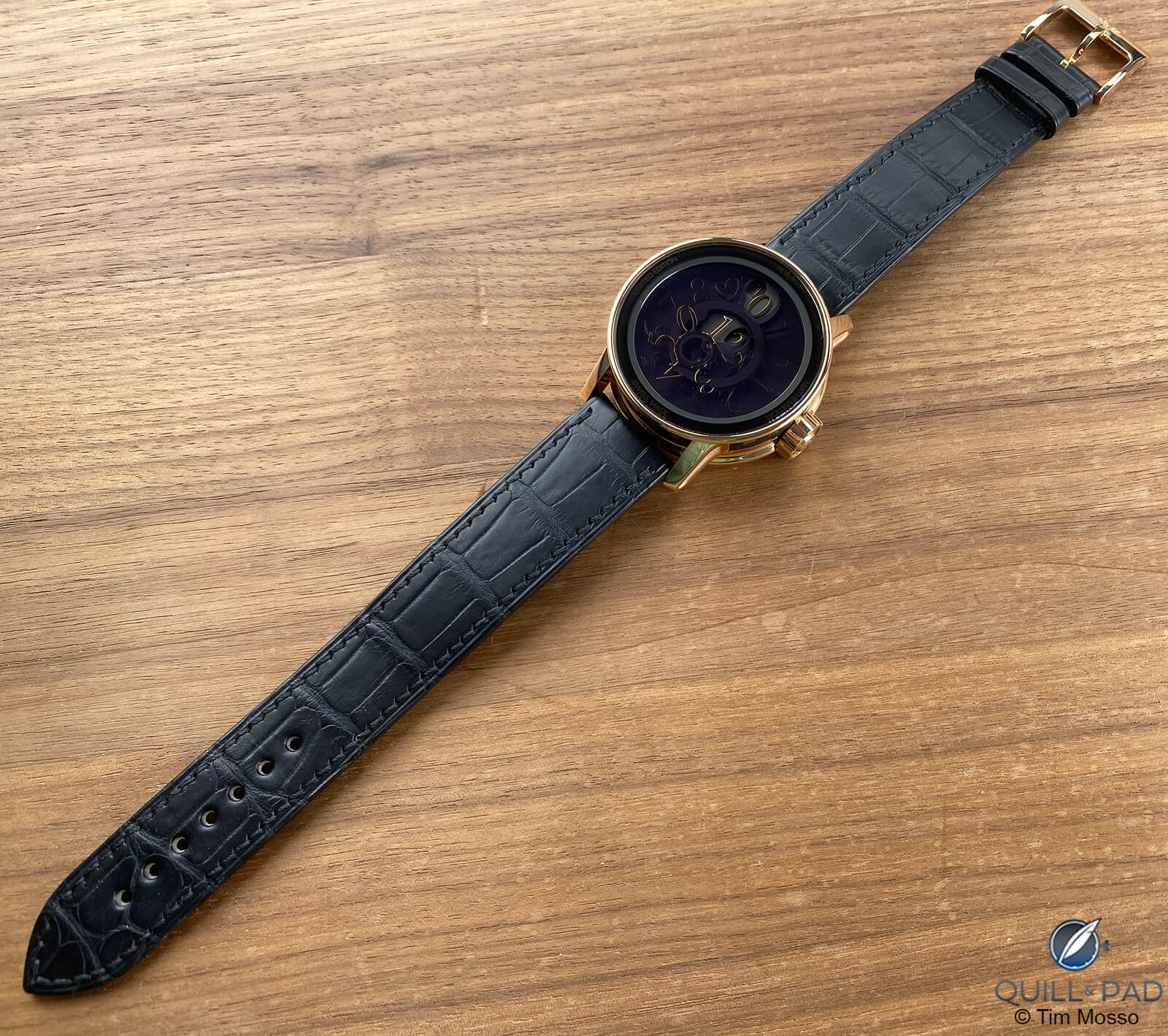 Given the Land Rover-like depreciation, the De Witt Academia Mathematical is appealing to watch collectors who crave general attention but not brand recognition. The watch gets noticed, inspires curiosity, and generally attracts positive feedback.

De Witt’s digital display might be the coolest watch your friends have never heard of. If their memories are a bit rusty, just remind them that it’s “a Napoleon watch.”

A, Lange & Söhne Zeitwerk Minute Repeater And Its Large Digits: Does It Cause Hyperdigitalia?

A. Lange & Söhne Zeitwerk: A ‘Date’ With History

A. Lange & Söhne Zeitwerk: Digital Delight With A Mechanical Heart

New A. Lange & Söhne Zeitwerk Lumen Honeygold, Plus Why October 24/25 Is So Significant To Lange