A rowdy teenager tends to be loud and brash but may not have much with which to back that up. This often comes from an energy and passion that outpace training and experience, leading to wild ideas in need of refinement. Think of garage bands, fashion choices, and experimental automotive modifications. As teenagers become young adults, this bravado is (usually) tempered by some experience, possible failure, and growing into their skills.

It’s often said the best musicians, artists, mathematicians, designers, writers, and other creatives do their most innovative work in their twenties for just this reason. The unbridled exuberance of youth is still flowing energetically in their veins – but with a bit more practice under their belts. Yet there often comes a time following this period in which talent, experience, and the desire for some level of restraint coalesce to hone the wild ideas into nuggets of gold.

This is the period in which rock stars turn into icons, best-selling authors into literary giants, and designers into era-defining geniuses.

Dieter Rams, for example, a German industrial designer, is the reason that much of the modern world looks the way it does. Beginning largely with Braun in his thirties, Rams has helped define what clean, simple, and refined design looks like (and was the main inspiration for Apple designer Jony Ive). His ideas have permeated so many facets of industrial design that it’s hard to imagine what the last half-century would have been like without him.

You might say the same in the watch industry about someone like Gérald Genta, a designer who started creating real icons in his thirties. The sweet spot of creativity and longevity together come not just from raw talent but persistent practice and constant iteration. 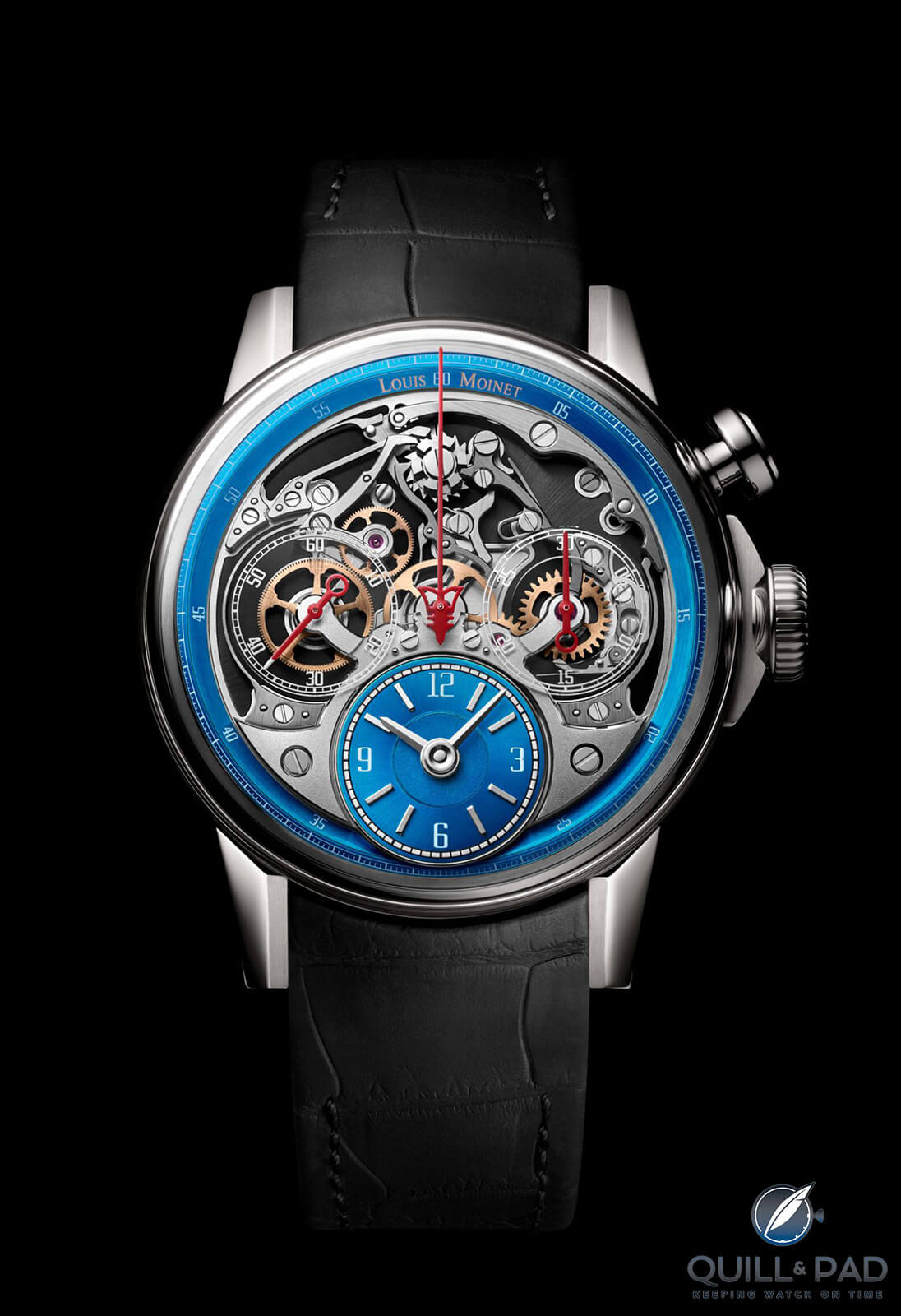 Brands as a whole can also go through this growth, eventually finding a rhythm and needing only tweaks instead of repeated reinvention. Louis Moinet is a fantastic example of this with the recent release of the Memoris Spirit, an aesthetic and mechanical update to the classic Memoris chronograph that may end up being the most sought-after model yet.

The original Louis Moinet Memoris is a stunning monopusher chronograph with the mechanism mounted front and center for all to see, highlighting the engineering behind the movement. This watch was a huge win for me, and over time the brand added to its allure with a variety of captivating colors and exquisite finishing variations. 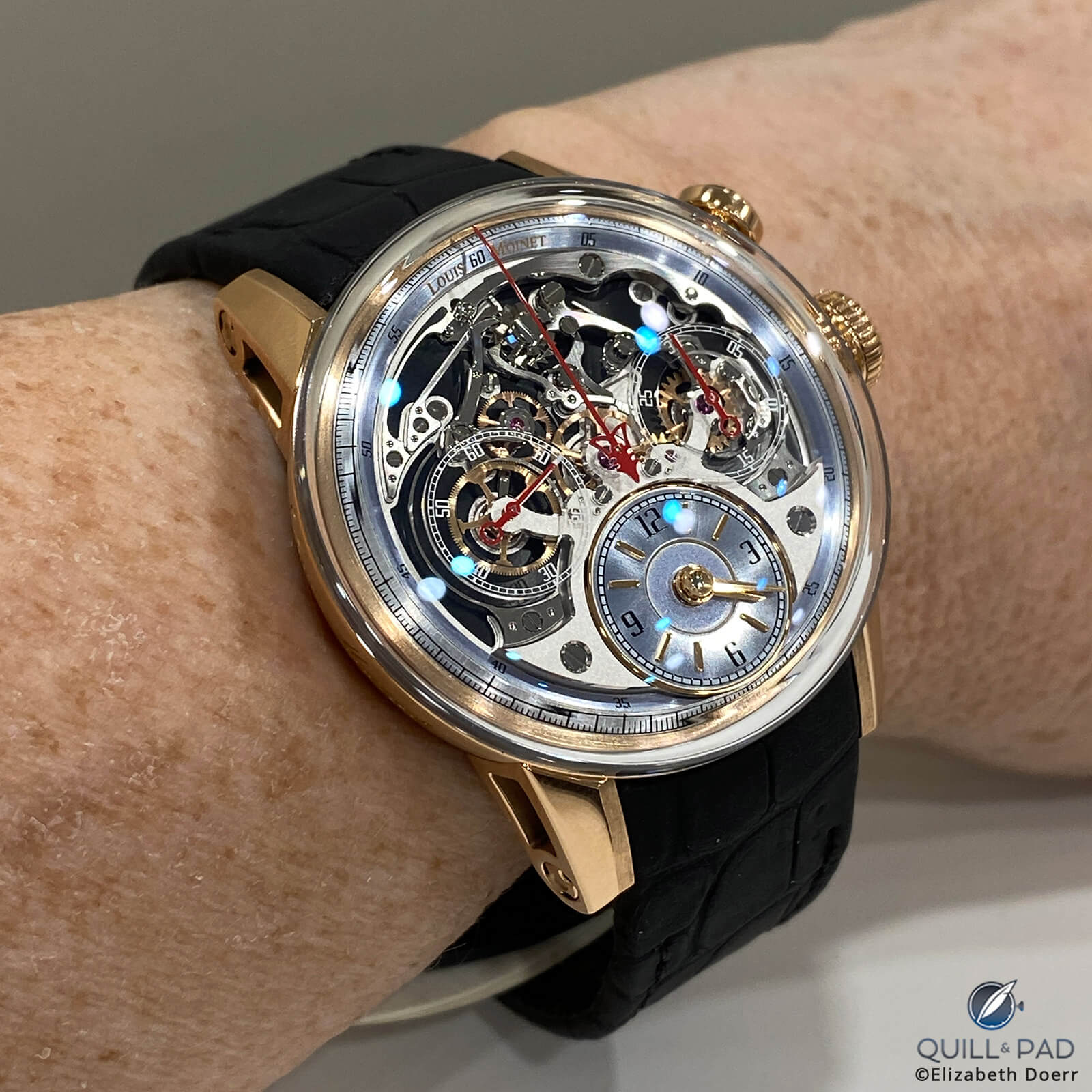 Louis Moinet Memoris Spirit in red gold on the wrist 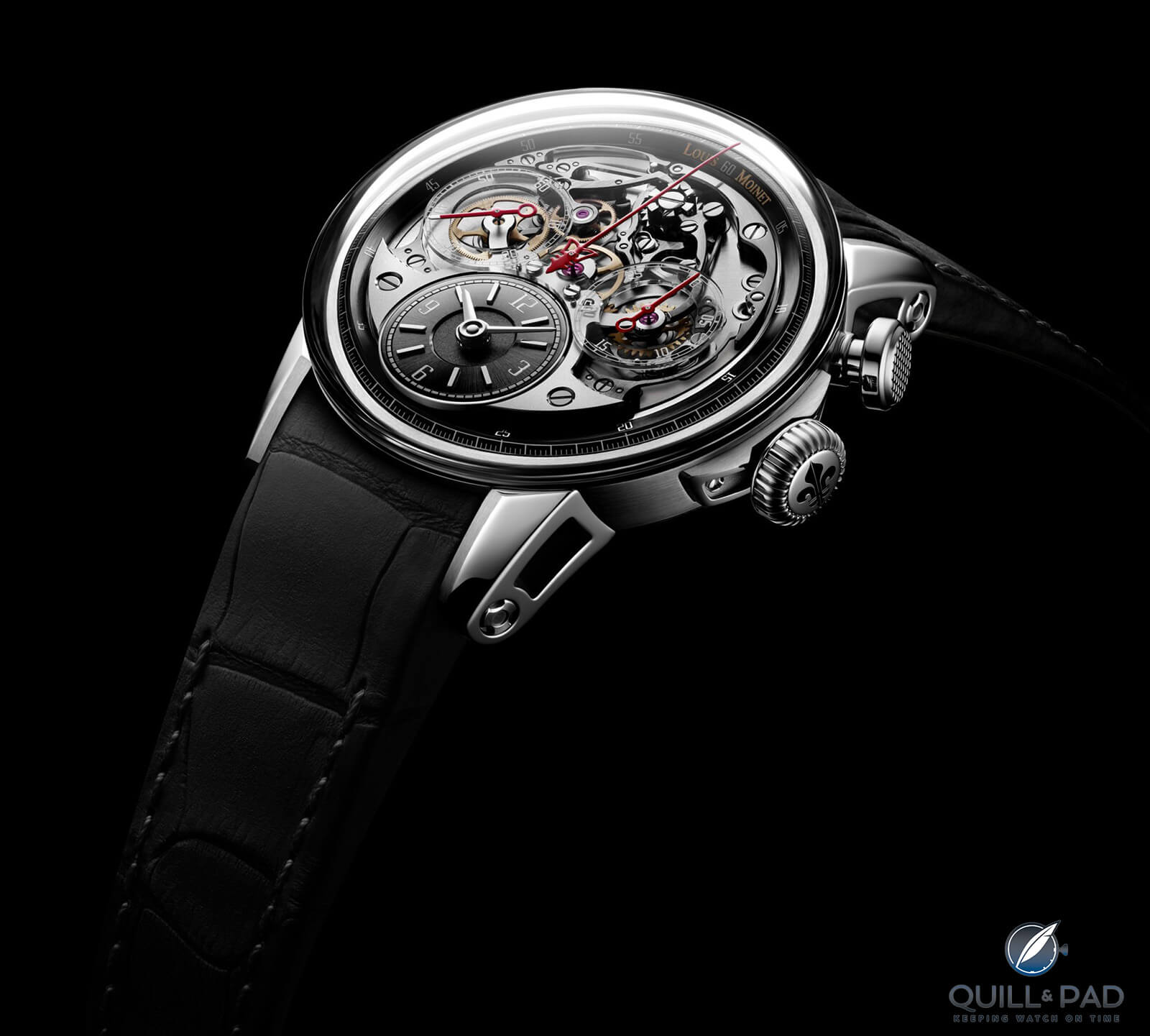 These key details form the basis of the new Memoris Spirit but it is so much more with only a few additional tweaks. The sizing has been slimmed down from the bold 46 mm to a very approachable 40.7 mm, making this case one that can sit comfortably on so many more wrists. This was accomplished by removing the six-screw bezel that has been on nearly every Louis Moinet timepiece since the brand found its stride after its “adolescence.” That major departure allowed for a very different feel for the Memoris Spirit as well as some creative options.

Enclosing it all, the sapphire crystal is no longer a simple domed piece mounted into the bezel but now a massive box crystal that is mounted around the movement right up to the perimeter of the case. It allows a view into the movement that only the Astronef and Space Revolution models have offered at Louis Moinet thus far.

Another creative change afforded by the lack of a bezel and the use of the box crystal is the angular, double-reading inner bezel/flange ring that features a fifth-of-a-second scale on the outward angled edge and five-second numerals on the inward-facing edge. Combined with a long and gently curved chronograph second hand, this allows reading and appreciation from many more perspectives. 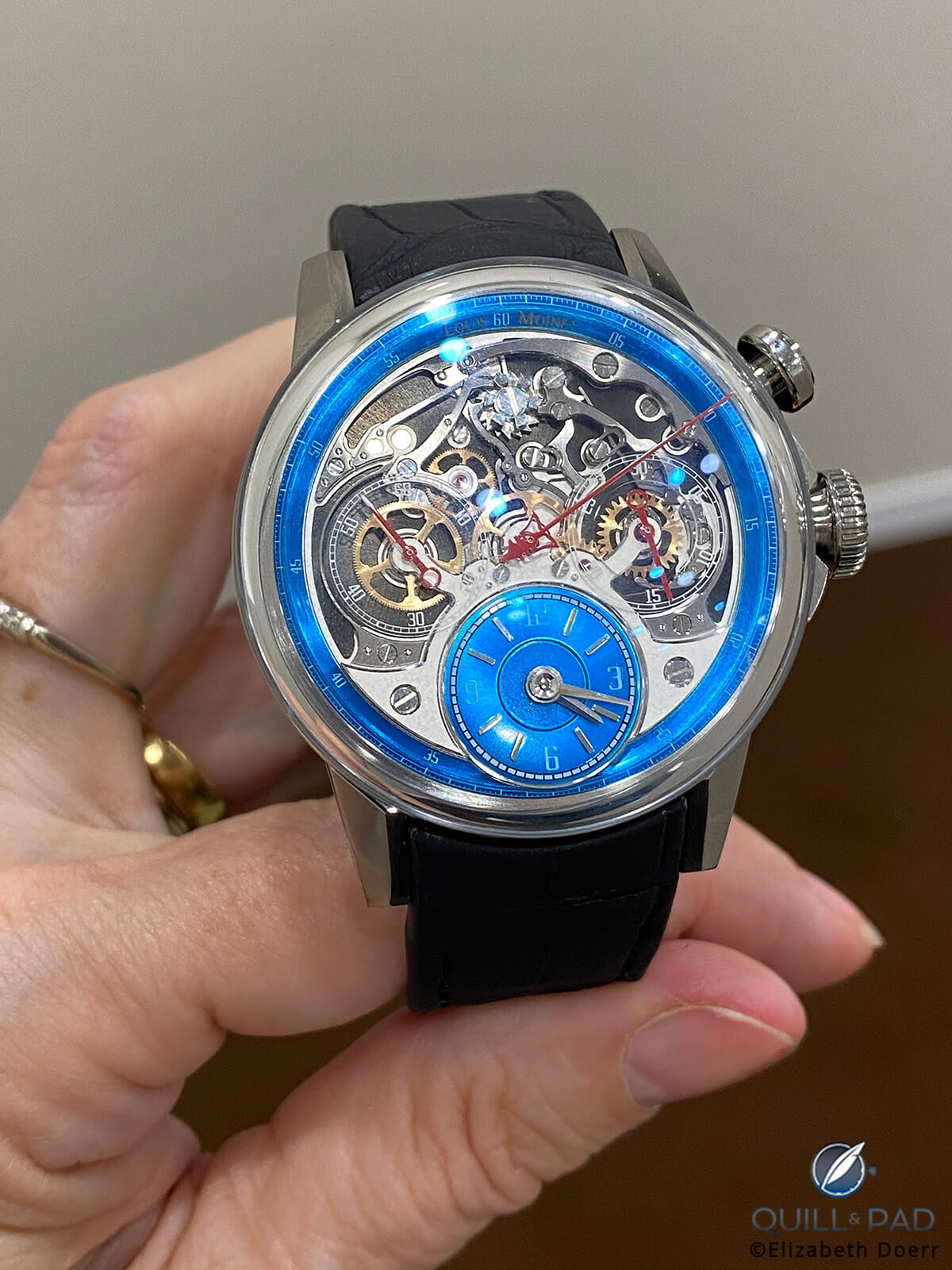 The thickness of the case with the large box crystal is nothing to scoff at, but thanks to a third of the thickness being translucent, it feels thinner than it is. This is always the case with box crystals done correctly, and I would argue that Louis Moinet has nailed it with this implementation.

What’s hardest to miss is that case profile has been reworked to feel a bit better proportioned, and the lugs have been skeletonized to reduce the weight even more. Some of the inner bezel text and the skeletonized lugs reminds me of the Audemars Piguet Code 11.59 but in a way that makes sense and is executed incredibly well. It’s a modernization and adherence to some industrial design philosophies that take established aesthetics and rework them for the next decade. 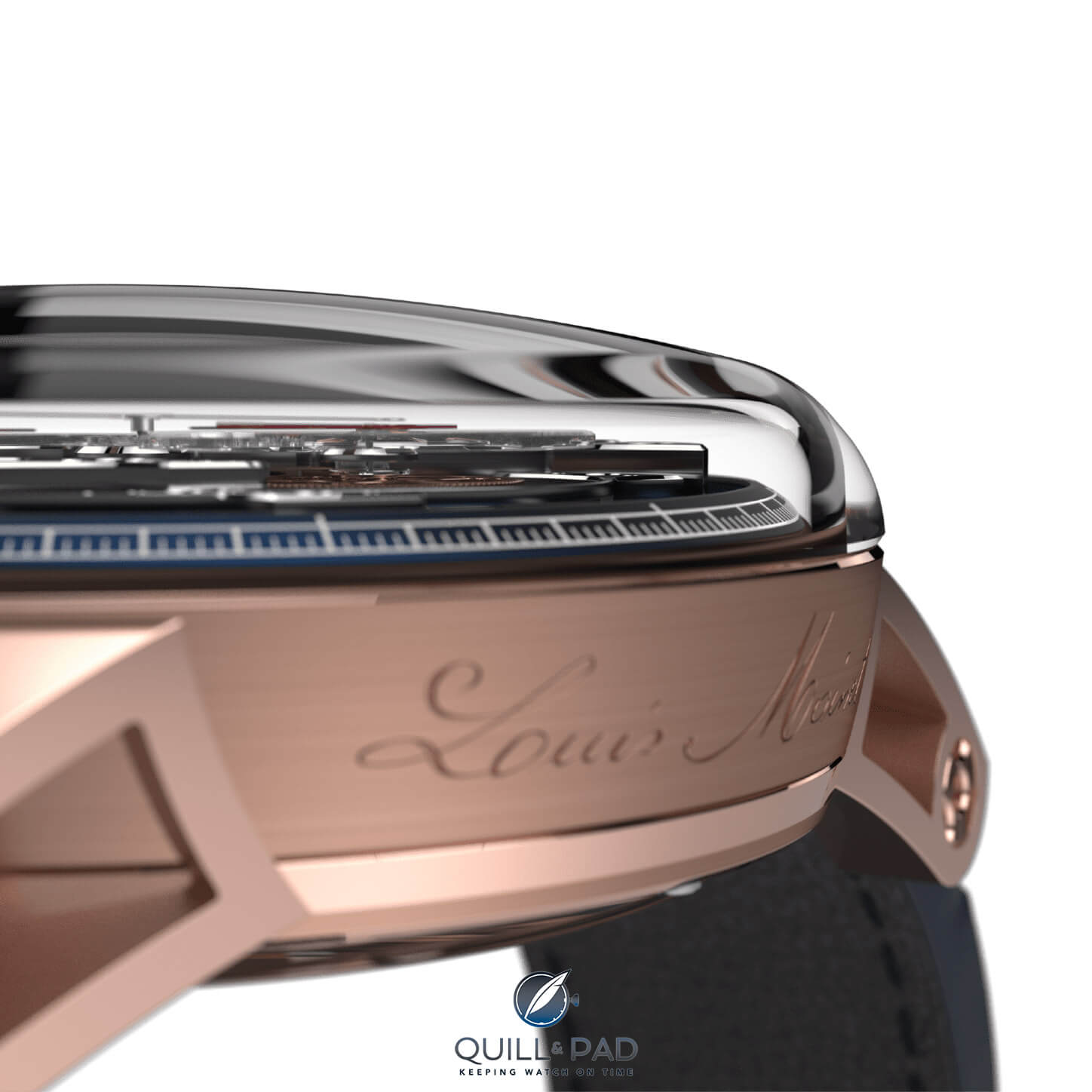 Yet there is something that will come as no surprise to anyone: my favorite aspect is the ability to peer into that chronograph movement. It already was a star in previous Memoris models, but the addition of the large box crystal turns the watch into a miniature city under a dome, a little terrarium of horology.

Combined with the translucent dials that show off even more of the mechanics, this is a great timepiece showing how a chronograph mechanism works. 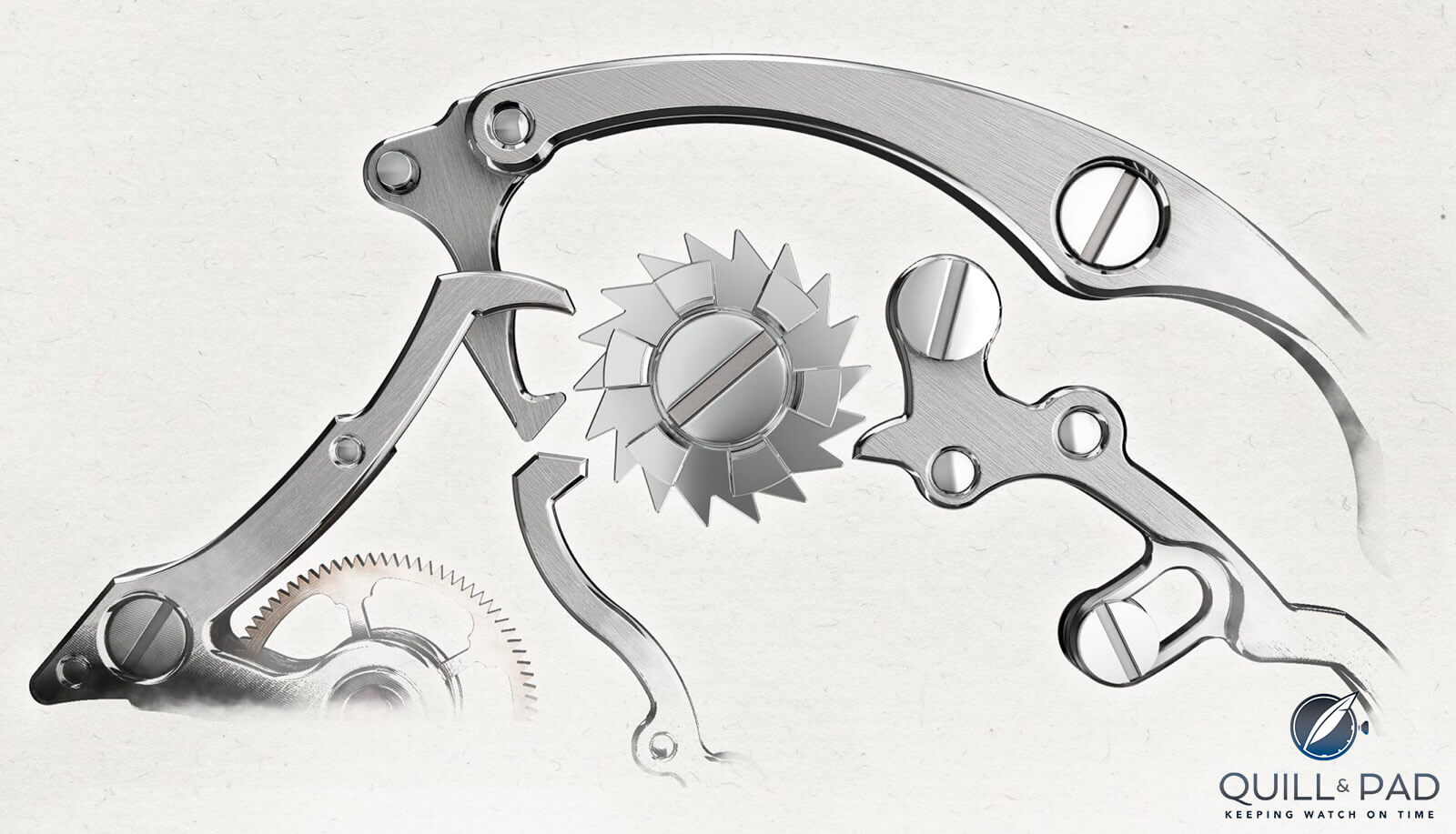 All of these small updates have made the Memoris Spirit the best watch to introduce the uninitiated to Louis Moinet’s wilder pieces, which make up the lion’s share of the collection. Taking the last two decades of aesthetic choices from the brand into consideration, it is clear that this piece is likely to have the broadest appeal to the traditional watch buyer. That makes sense as Louis Moinet shifts into its “adult years” design-wise; the brand is using its creative experience and style to develop the next generation of Louis Moinet watches. 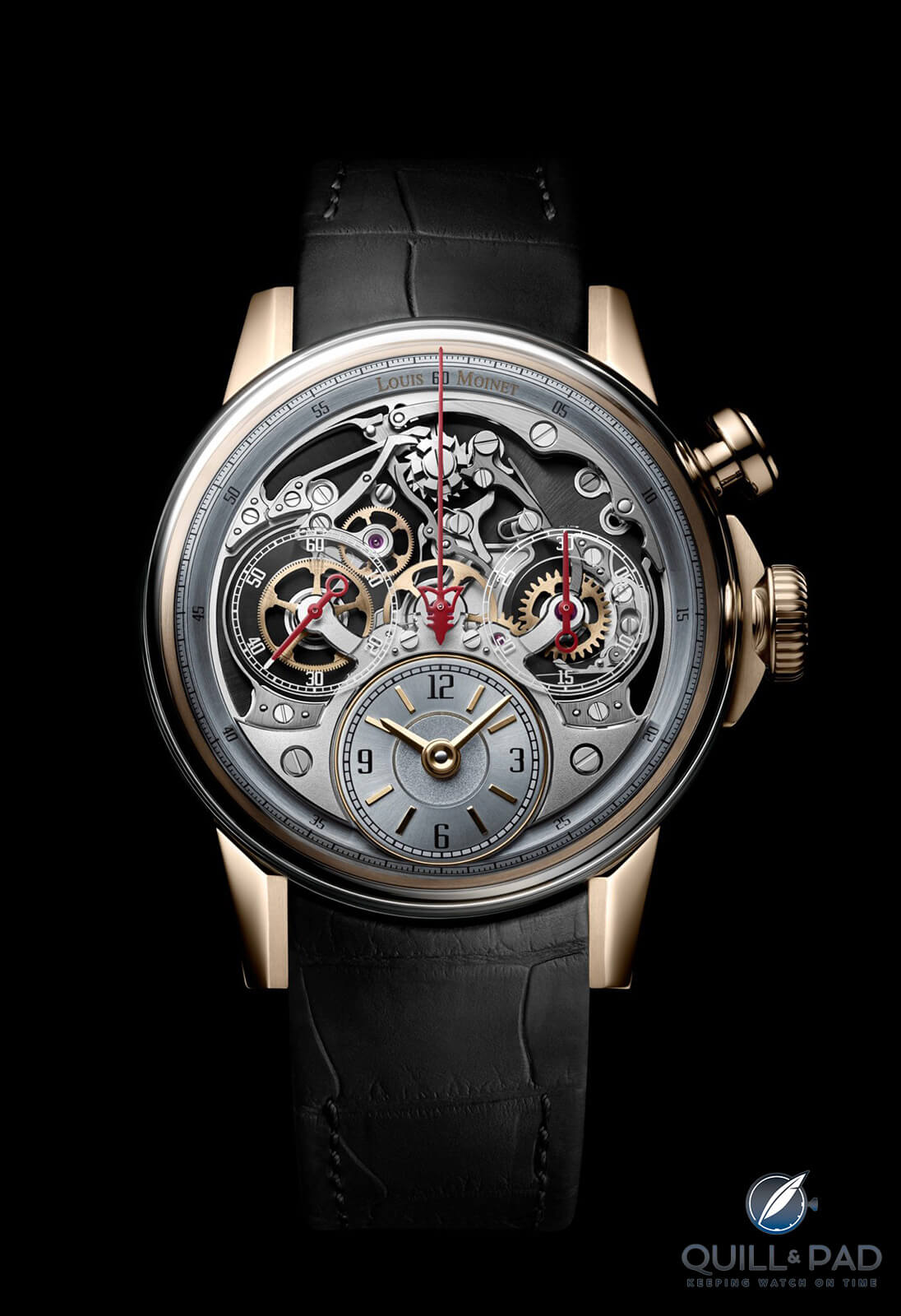 I feel that Louis Moinet’s core business will still be in the use of ultra-rare materials and high-end tourbillons, but leaning into chronographs and other mechanical details while being a bit more restrained with bold aesthetics could be a great evolution. Don’t get me wrong: the Memoris Spirit is still very bold when you compare it to classic dress watches. But side by side with the rest of the collection it purrs more than roars.

Louis Moinet also tested the reaction to the new direction by debuting the Memoris Spirit as a unique piece for Only Watch 2021. This has become a somewhat popular idea as other brands and independents have released the first versions of upcoming models for the charity auction over the years. The Memoris Spirit Only Watch was largely the same as the later version seen at Watches and Wonders 2022 but with unique colors and a special lacquer finish on the main plate.

The reaction was good, with the piece hammering for more than twice the auction estimate, showing that there was definitely appreciation for the new Memoris design direction. 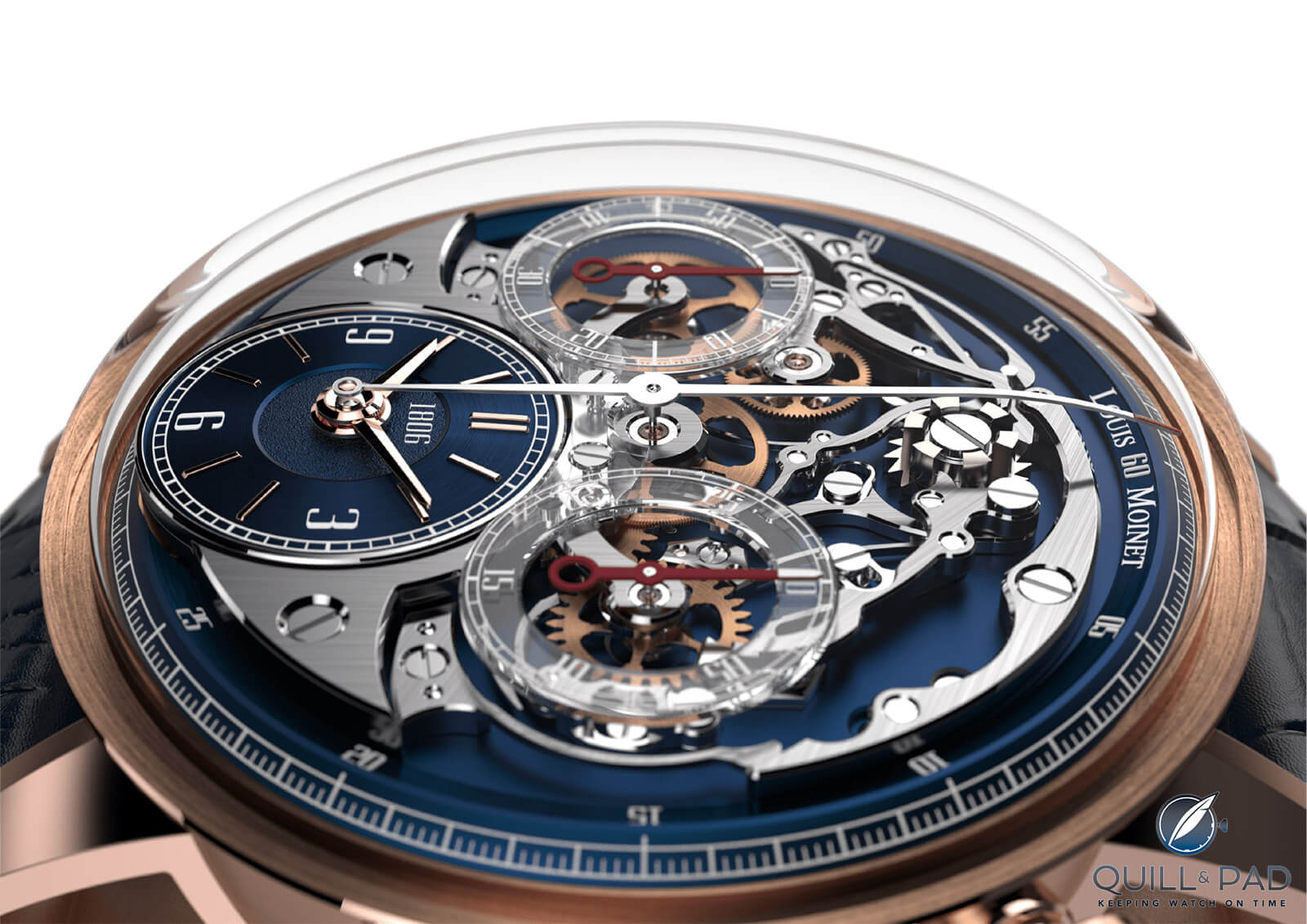 Now with two new limited editions having been released at Watches and Wonders 2022 offering the option for color customization (as do many Louis Moinet watches), I am excited to see the unique combinations that may come about. If it goes the path of the earlier Memoris variations with a lot of bold color choices (or even tries out pastels, neons, or earth tones) then the Memoris Spirit could become a top seller, not just for the brand but for anyone looking to add their own flair to a world-class chronograph caliber. 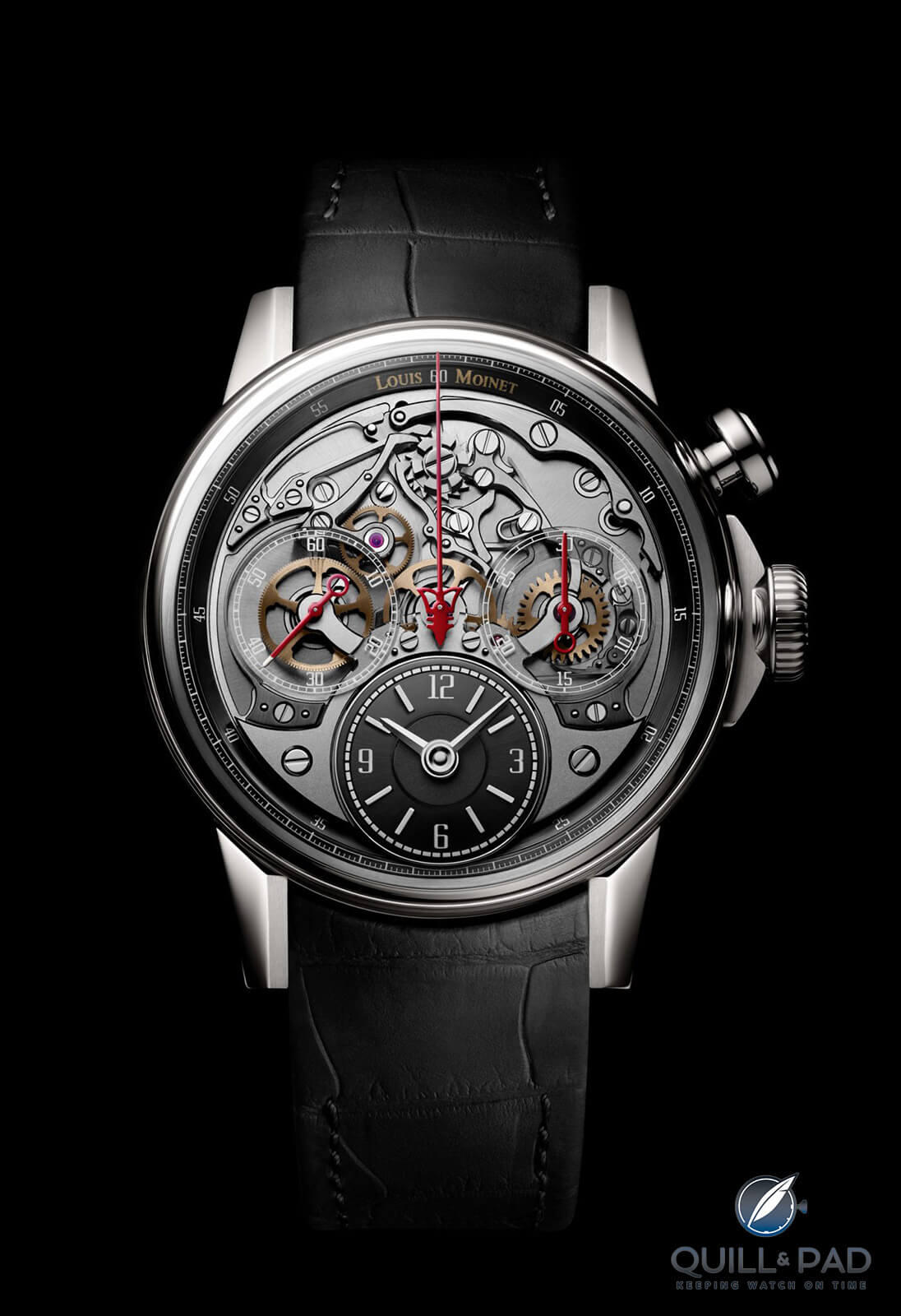 I look forward to being able to spend some hands-on time with the new design since I’ve already enjoyed the original Memoris models so much. In the meantime, I’ll keep coming up with mental color combinations that I’d like to see splashed across the dials in hopes that one day I would get the chance to make it a reality!

Enough about my hopes and dreams, let’s break it down!