Part of the manufacture’s program since 2003, the Grand Lange 1 was created for aficionados of the classic Lange 1 timepiece introduced in 1994 who prefer slightly larger cases. It originally came in at 41.9 mm in diameter, while the classic Lange 1 continued to be offered in the original 38.5 mm size. The Lange 1 is the brand’s flagship timepiece, the watch that certainly best embodies all that A. Lange & Söhne stands for.

Thinking back to 2002/2003, the trend for larger watches was in full swing, so bringing out a larger version of the brand’s flagship made a lot of sense. And continues to make sense as there are still people who prefer watches larger than the traditional 38 mm.

The movement of the original Grand Lange 1 was “simply” the Lange 1 movement in a larger case, which resulted in the design solution of the overlapping subdials. Many agree that these proportions were not as perfect as they could be, so A. Lange & Söhne has continued to improve the Grand Lange 1 over the years.

A major revamp came in 2008 with a lightly freshened dial design. The company credited the change to a desire to create a stronger visual tie to the original Lange 1 by implementing delicate snailed grooves around the two main display subdials.

Over the course of the years, the movement was also slightly modified to better fit the larger case with notable updates in 2012. 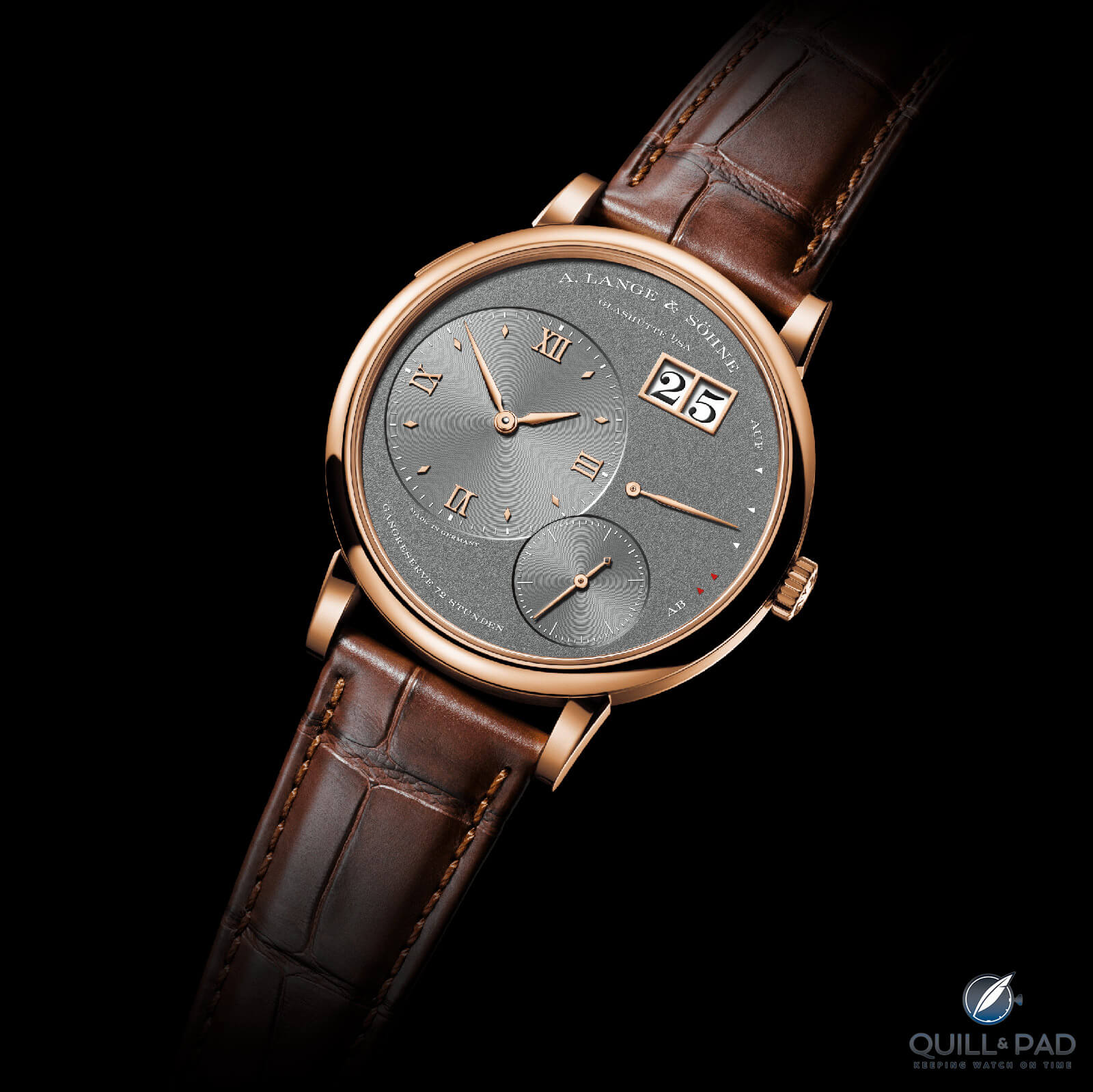 But now comes the perfect version of the Grand Lange 1, a watch that won over even the staunchest fans of the classic size (like me).

And now A. Lange & Söhne revisits the Grand Lange 1 with a successful refresh that is anything but boring – starting with the case height, which has been reduced by close to a millimeter to make it even more svelte. The watch now comes in at 8.2 mm, the perfect stealth height for sleeves.

“Over the past couple of years, we gave ourselves the task of making the Grand Lange 1 a touch more elegant,” said Anthony de Haas, A. Lange & Söhne’s technical director, in a personal meeting. “We didn’t want to do too much to it, though. It is a good movement, a beautiful, flat, reliable movement, and we didn’t want to touch that. And we managed to achieve our goals.” 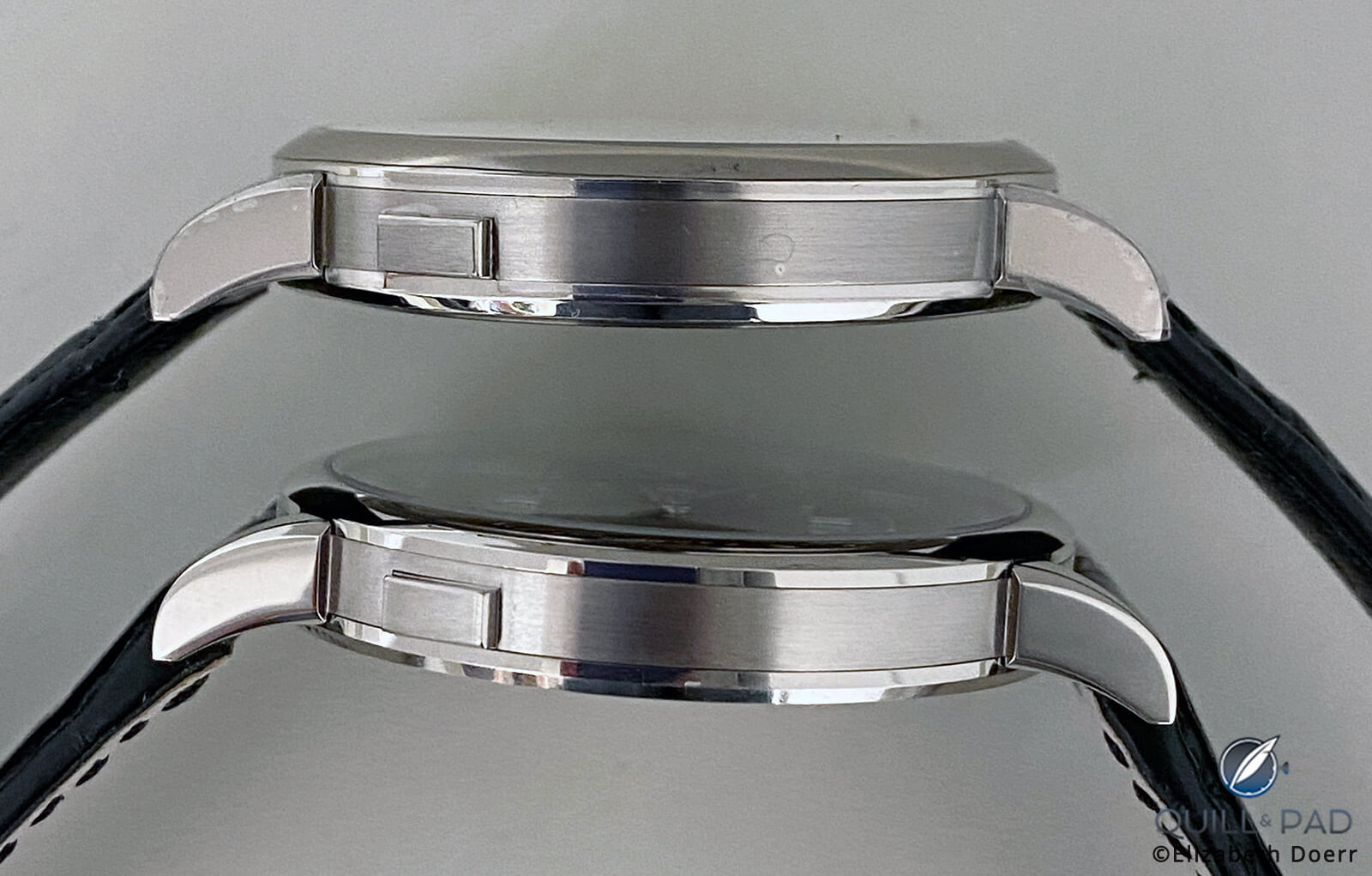 The 2022 A. Lange & Söhne Grand Lange 1 from the side on the bottom, with the previous version on top

Shaving close to a millimeter off the height of an existing watch is no mean feat, especially if your goal is not to touch the movement. So how did the A. Lange & Söhne team do it?

The Grand Lange 1 was most recently 8.8 millimeters in height, and the team managed to bring that down to 8.2, all by changing elements of the dial and case. “And it really makes a giant difference,” de Haas noted. 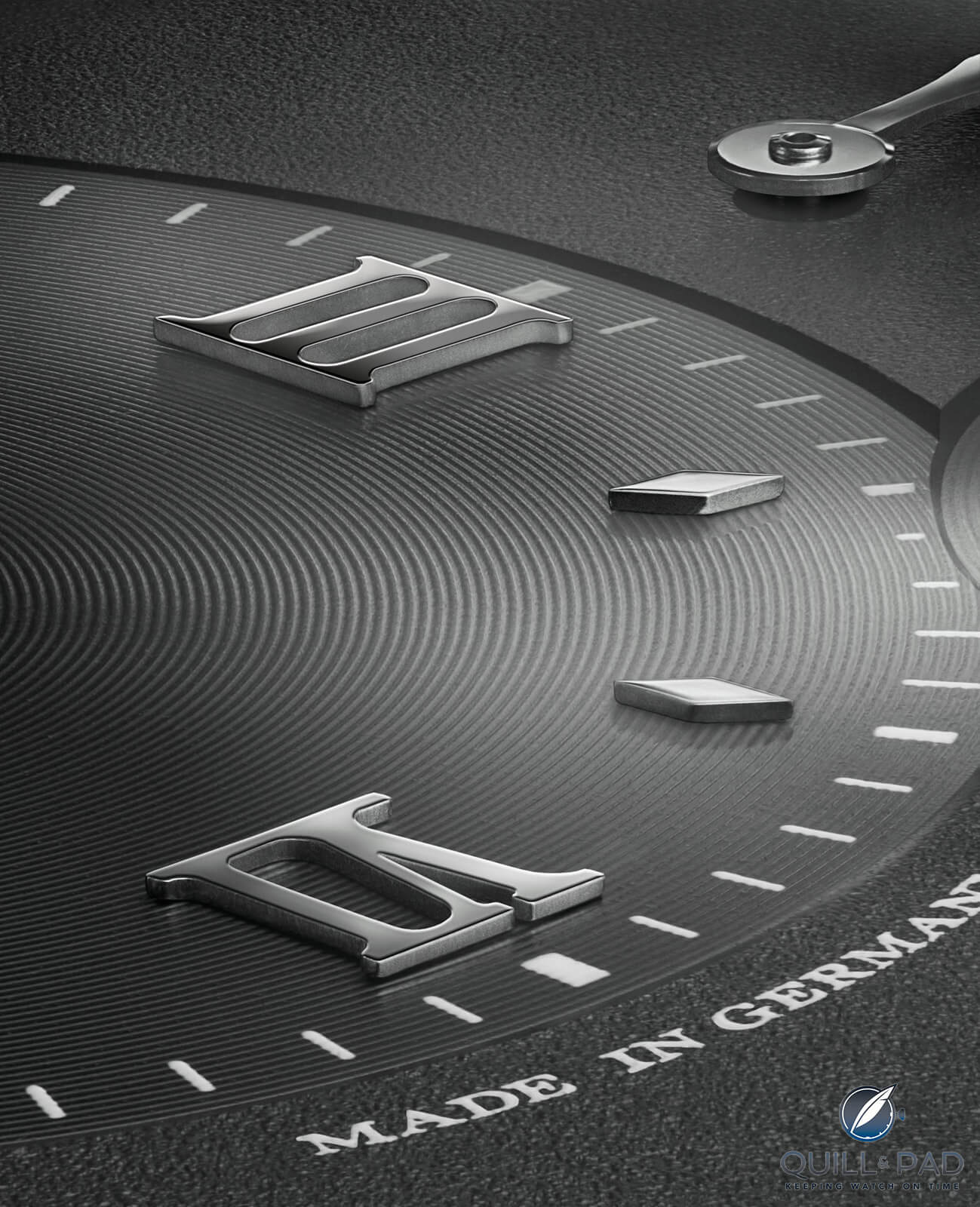 Dial of the 2022 A. Lange & Söhne Grand Lange 1 in white gold: the appliqués are about half as high as usual

The secret lay chiefly in optimizing the case, more specifically the distance between the bezel and sapphire crystal. The team also reduced the height of the appliqués on the dial by about half to aid in this. When you look at the dial through a loupe now, it’s obvious. And it makes the dial much more beautiful, which I hadn’t anticipated. The closeness of the metal to the sapphire crystal covering mesmerizes in a way.

The team also lowered the dial train so that the hands are as close to the galvanized silver dial as possible. 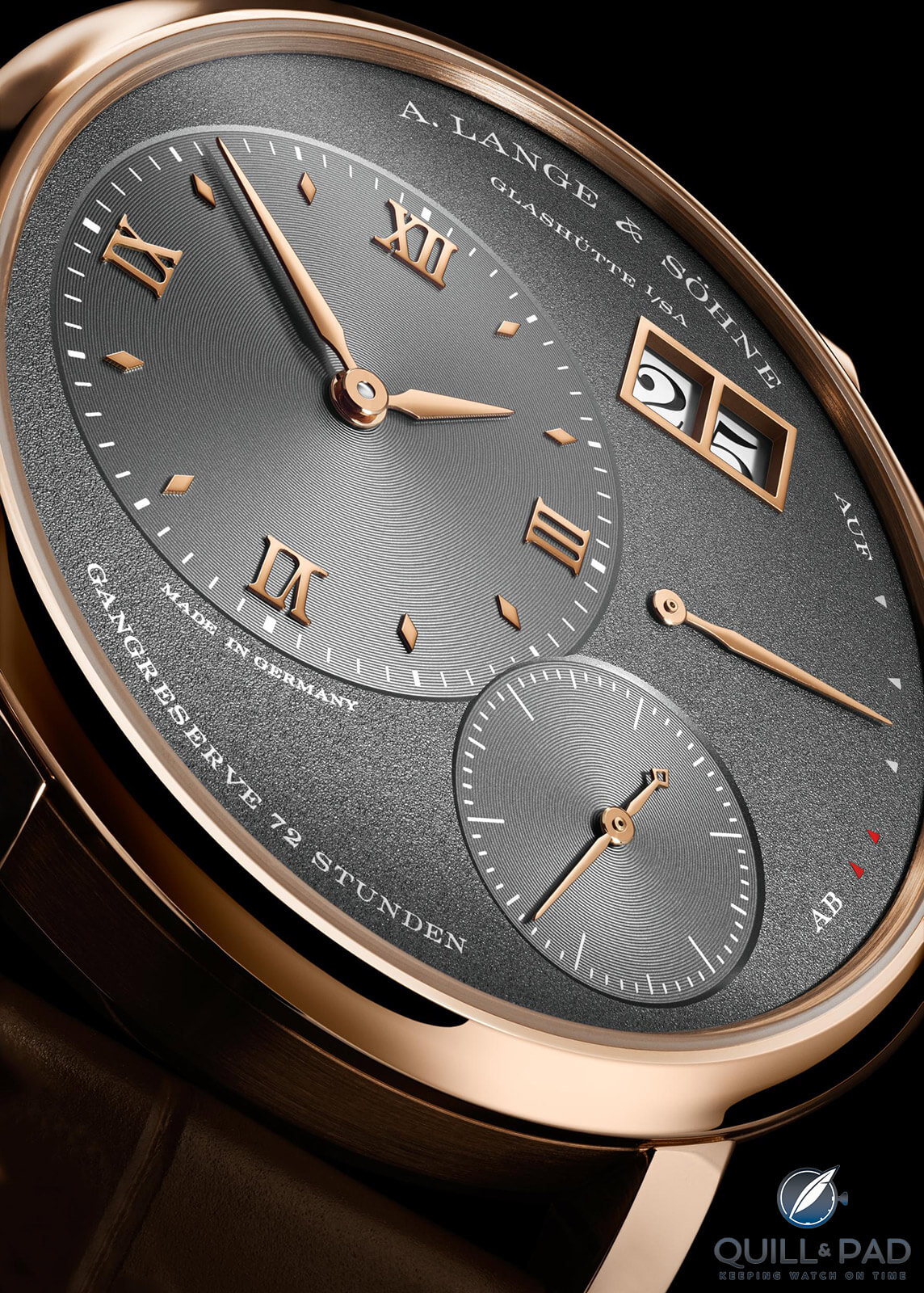 “The dial is not thinner, though,” de Haas underscored. “Technically, it can’t be thinner. The underside of the Lange 1 dial is about as technical a dial as it gets, and it is already quite thin at 0.25 mm.”

However, de Haas and his team didn’t quite get away without touching the movement at all: the distances between the first and second wheels were optimized. “And we were so surprised at how elegant this watch now looks.”

For me, the change is like wizardry. The difference between this new version and the previous one is beautifully obvious when you put them next to each other.

With all that Lange has learned about dials over the decades – and most obviously during the Covid era when at times the brand had to produce dials in-house out of supplier hardship – it’s perhaps not that surprising that this new dial is remarkable in its understated beauty. In fact, it is quite a vivid dial for one that is grey in color.

The transitions between the two main subdials and the rest of the dial elements are now much more balanced, with the very slight subdial overlap now almost imperceptible. 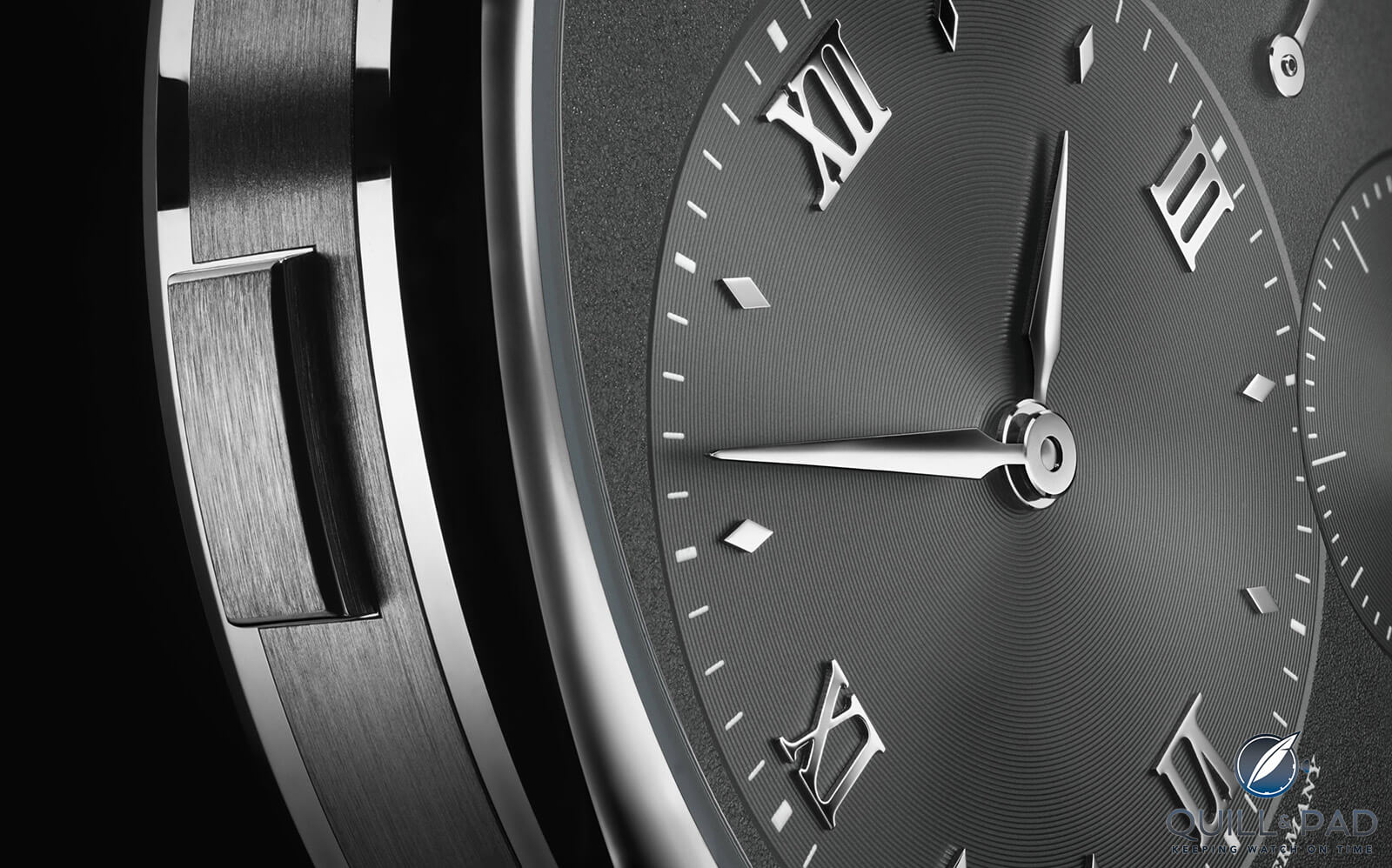 De Haas explained that the surface of the entire dial was rethought, with the team deciding on a type of rough grainage in the main areas, though without going so far as to make a hand-hammered Handwerkskunst-style surface.

The outlines of the subdials are usually very pronounced on the Grand Lange 1, but here they are much, much gentler. One of the secrets, de Haas revealed, is the very sparing use of cellulose lacquer on the dials.

This particular shade of grey gifted the look with high-contrast hands, Roman numerals, and lozenge-shaped hour markers, even on the white gold variation, whose applied elements are also all white gold. On the pink gold version, everything on the dial absolutely pops. But the white gold version is seriously not far behind. 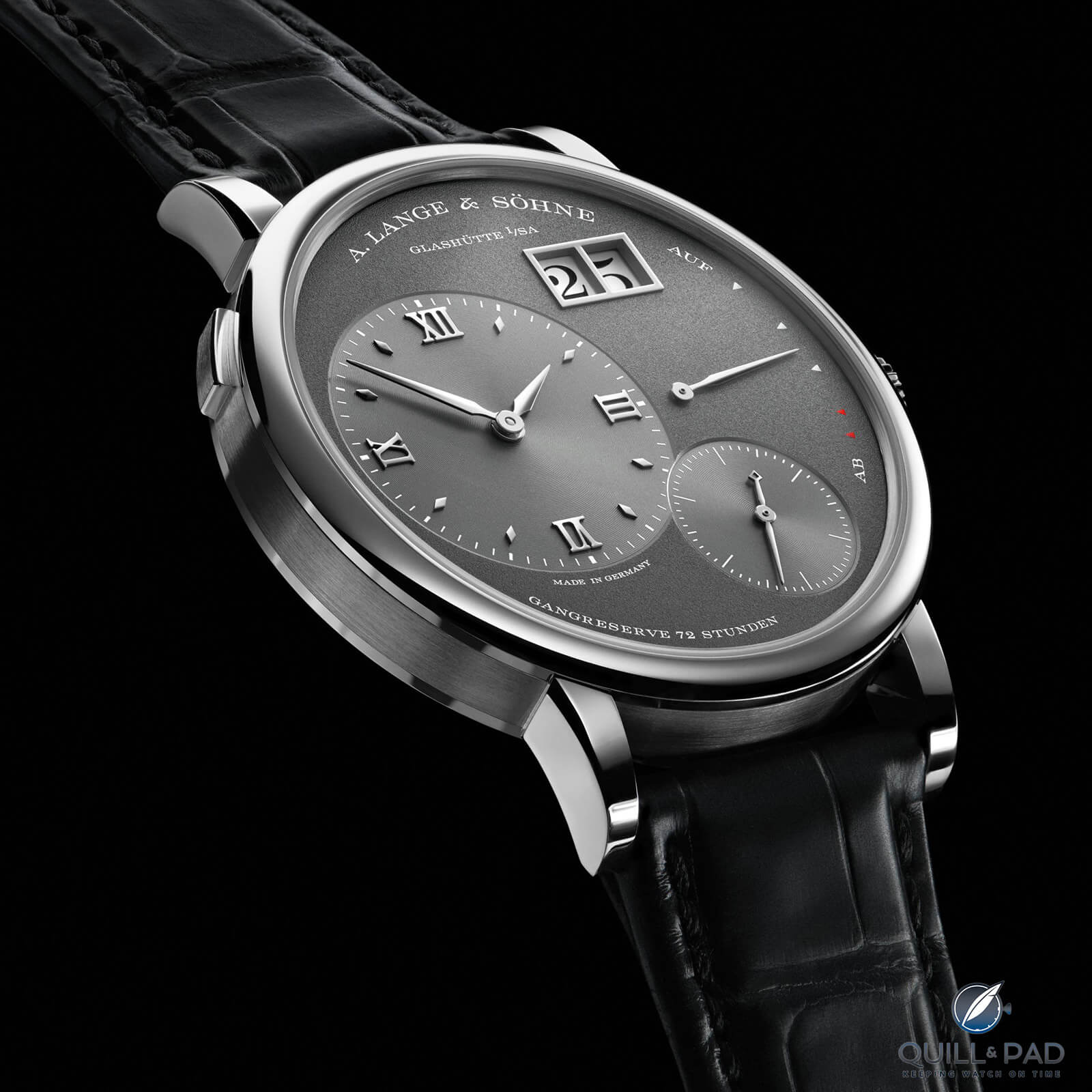 And to top everything off, the case offers Lange’s new style of alternating brushing and polishing, which is only obvious when you look at the case from the side. 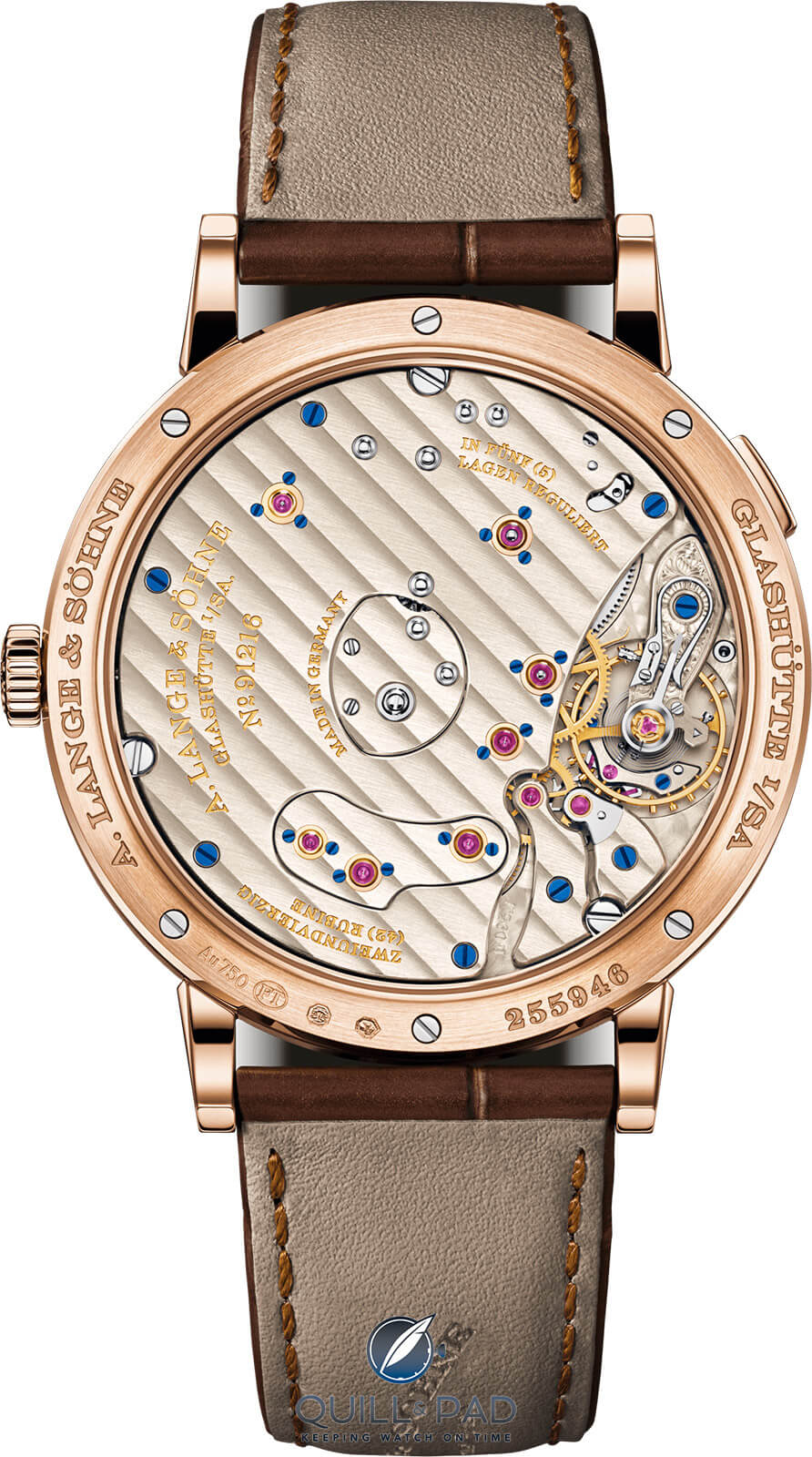 Comprising 397 exquisitely manufactured and finished components that were assembled twice before the watch was called done, the movement contains seven mirror-polished, screw-mounted gold chatons, another factor making the now lower height of this watch impressive. 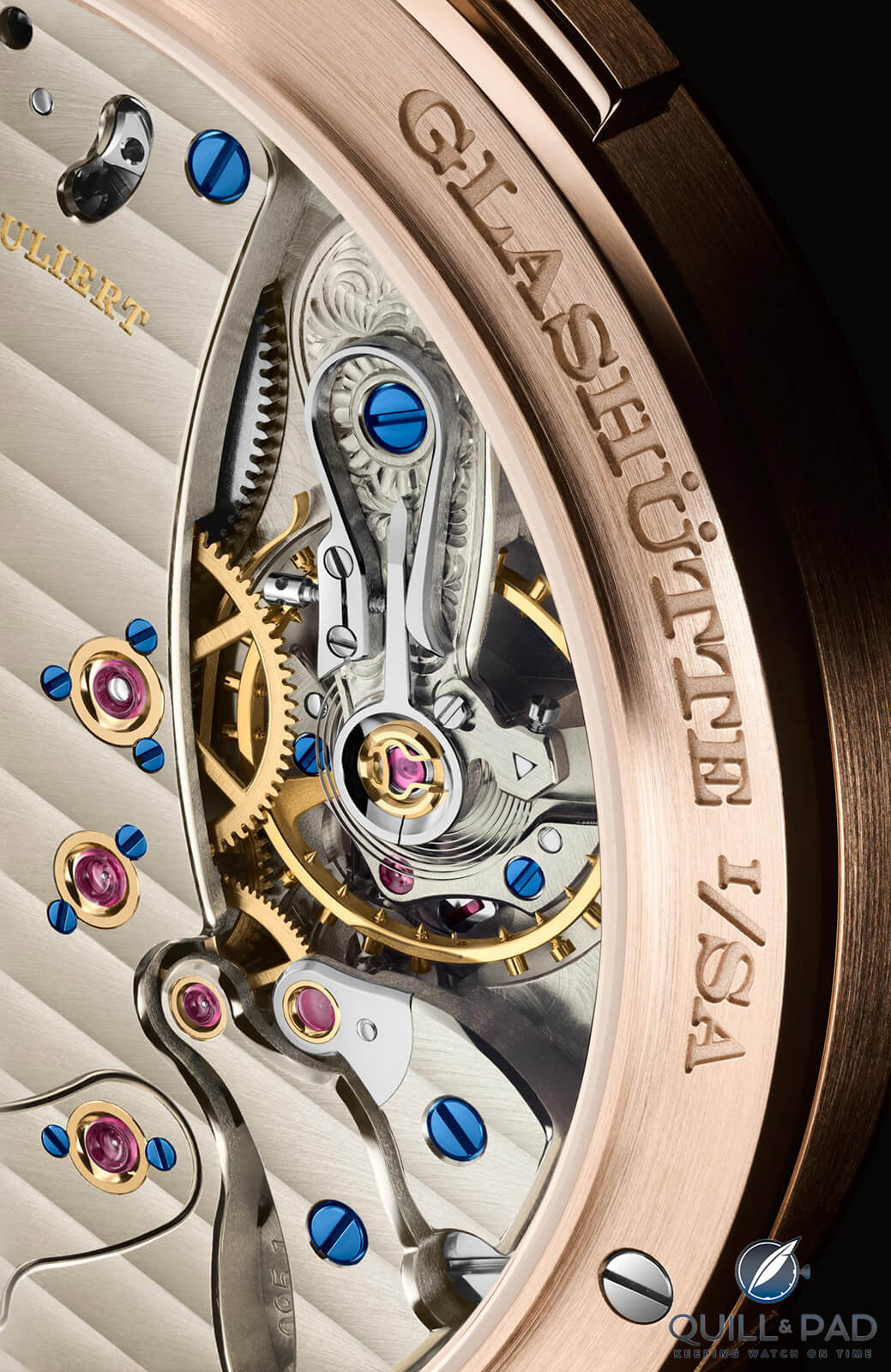 Engraved balance cock of the 2022 A. Lange & Söhne Grand Lange 1

The movement’s focal point, though, is the classic balance with screw balance wheel and an in-house balance spring. These are positioned beneath the typical hand-engraved balance cock, a signature element that adds the unique personal artistry of the engraver to one of the greatest serially made watches in existence. 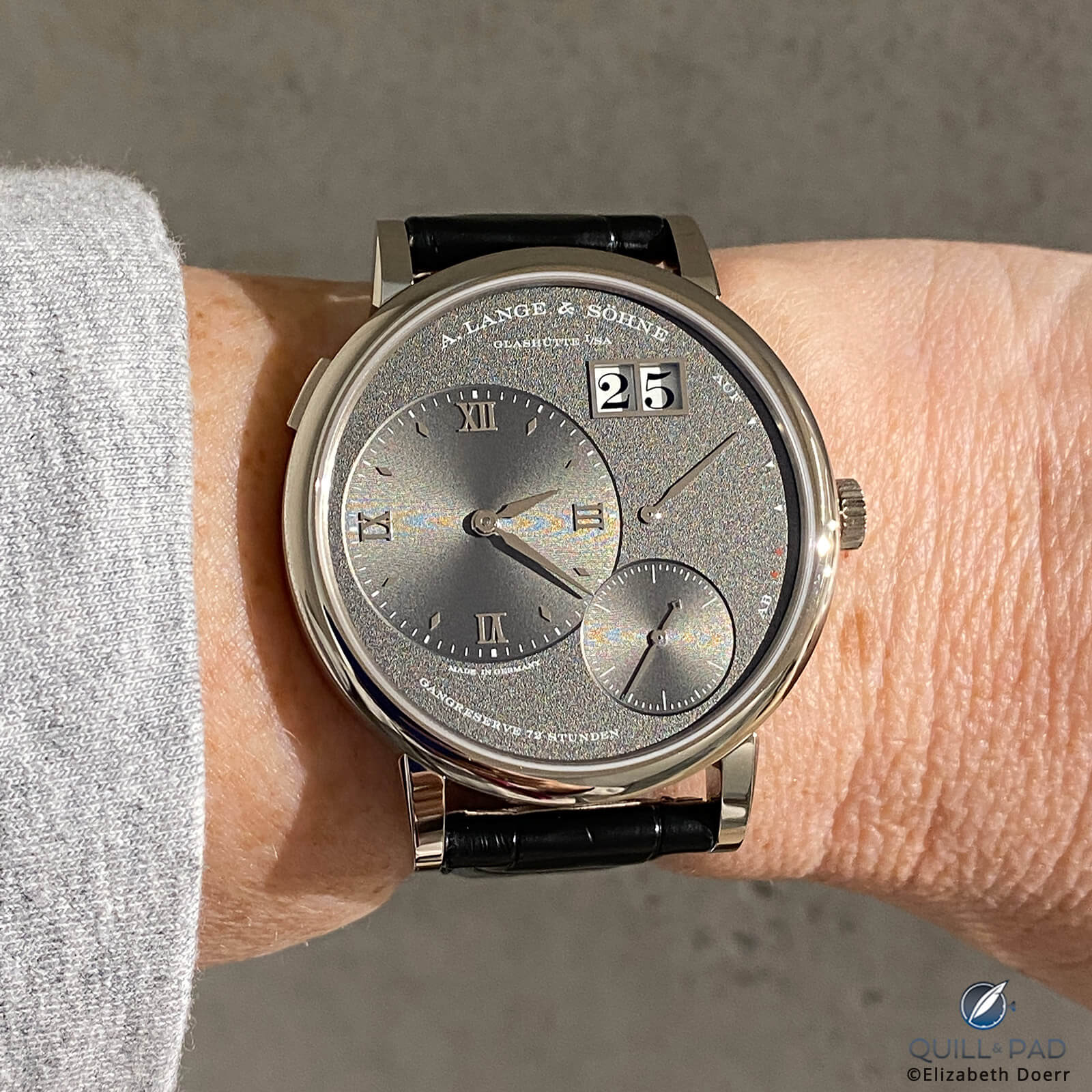 Both the white and pink gold versions come with a solid silver, grey-galvanized dial with surface treatment, unusual for A. Lange & Söhne, who normally changes up the dial color with each case metal. But, as you can see, both case metals work beautifully with the grey here.

This new Grand Lange 1 will replace the previous version going forward. Take another look at it: I’m sure you’ll agree it is stunning.

Wavelengths And Quantum Mechanics? How The A. Lange & Söhne Grande Lange 1 Moonphase Lumen Gets Its Special Shine

WatchBox Talks: How A. Lange & Söhne Became One Of The Best In The Business (Video)

A. Lange & Söhne Datograph Perpetual Tourbillon: A Machine With Heart And Soul