Piaget’s journey to thin timepieces has been a quest that has tracked the history of the brand from its earliest years in the Jura Mountains through to today, where world records for slim watches and movements reign.

The ultra-thin watchmaking continuum ramped up in 1957 with the debut of hand-wound Caliber 9P. This was followed in the 1960s by the automatic 12P, whose introduction was described by the Journal de Genève as “an event destined to be a milestone in the history of watchmaking.”

But it was in 2014 with the debut of the Caliber 900P in honor of Piaget’s 140th anniversary that a completely novel approach to thin watches was introduced: it merged case and movement into one svelte timepiece.

However, the pursuit of thinness was not yet complete. 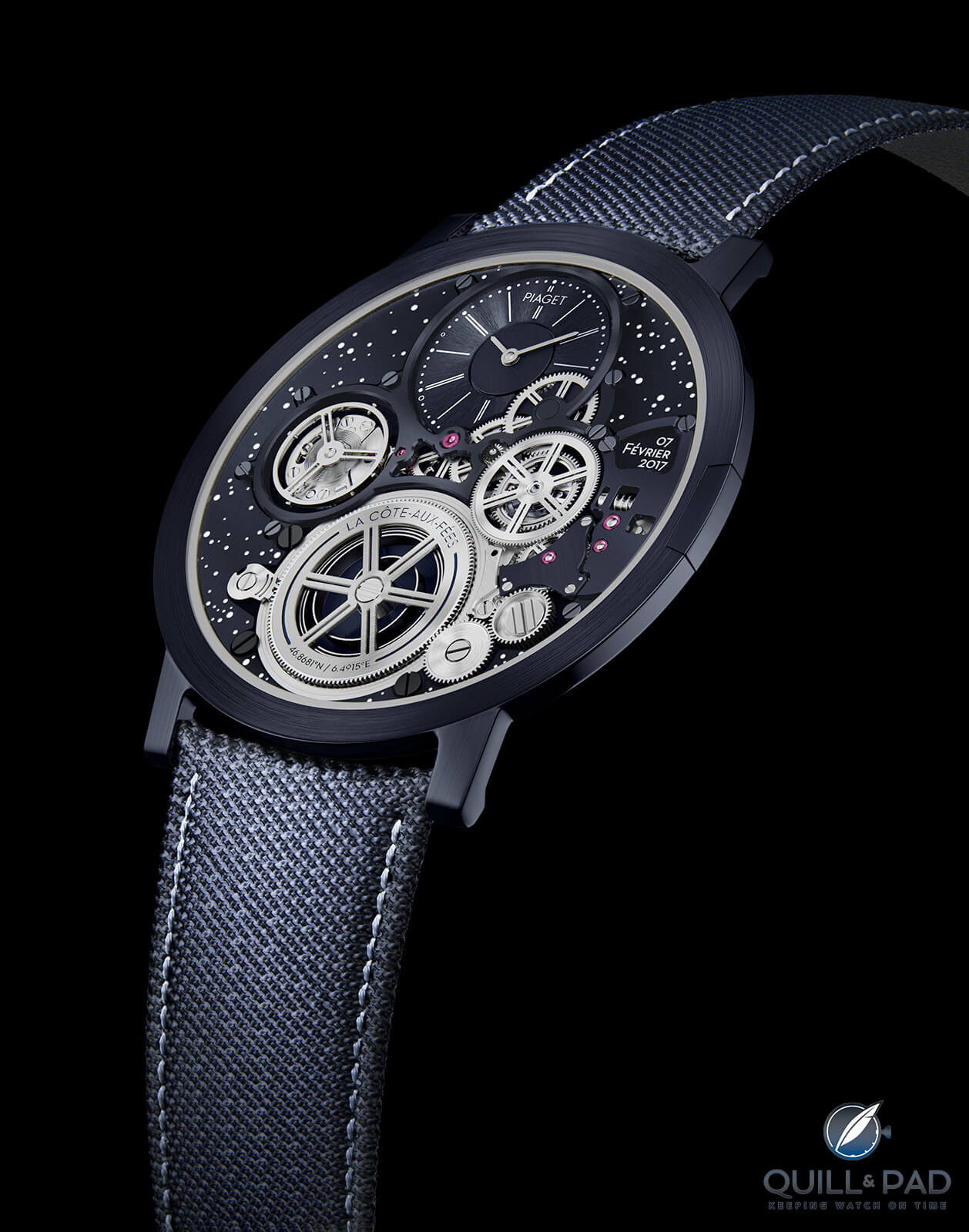 Piaget Tribute to the Altiplano Ultimate Concept Watch, introduced at Watches and Wonders 2022 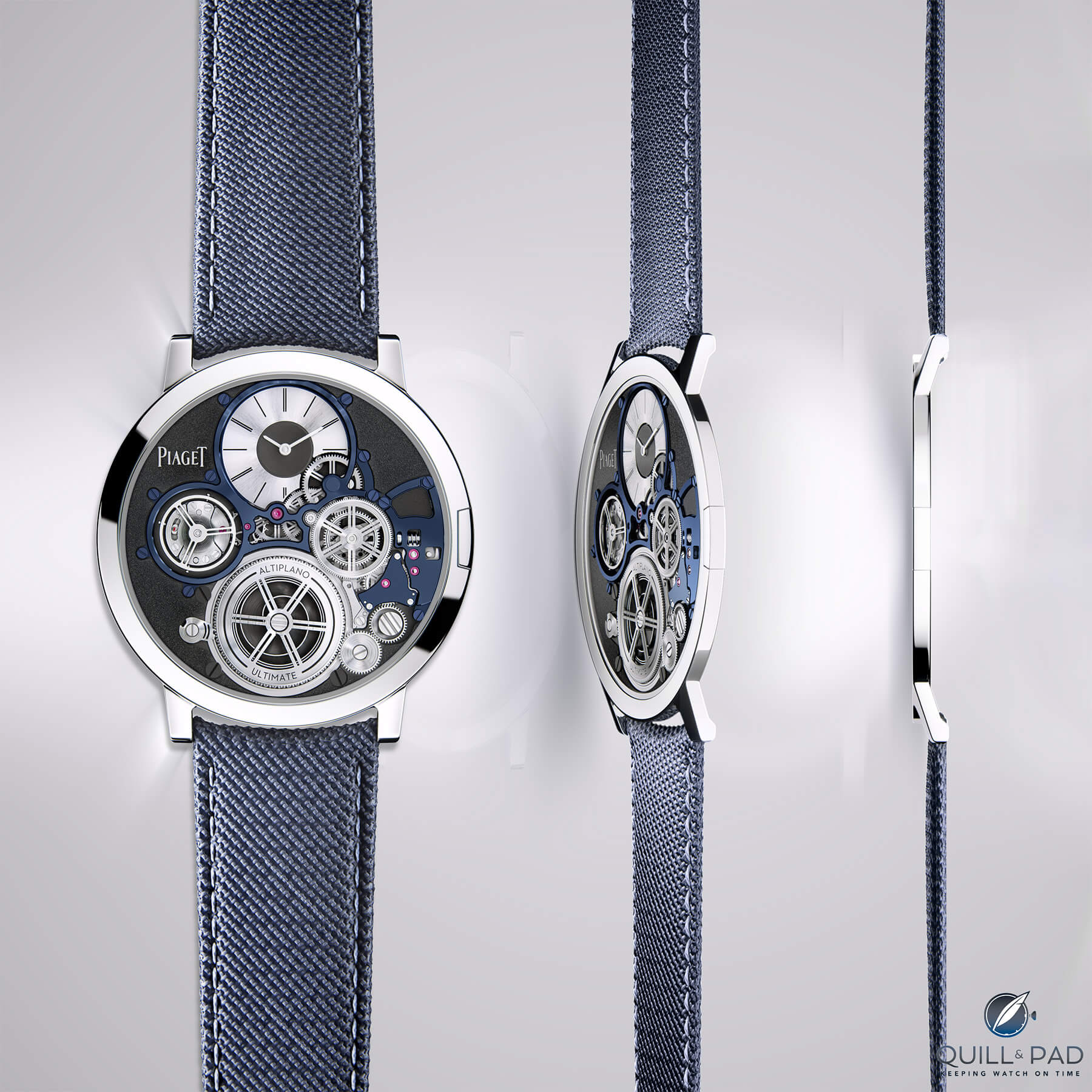 Born in 2017, the Altiplano Ultimate Concept has been on a unique – though similar – trajectory as its Piaget watch brethren. It made its debut at SIHH 2018. Just two years later, it garnered the Aiguille d’Or at the Grand Prix d’Horlogerie de Geneve 2020 for the micro-mechanical engineering that ensured its status as the world’s thinnest timepiece at two millimeters in height. 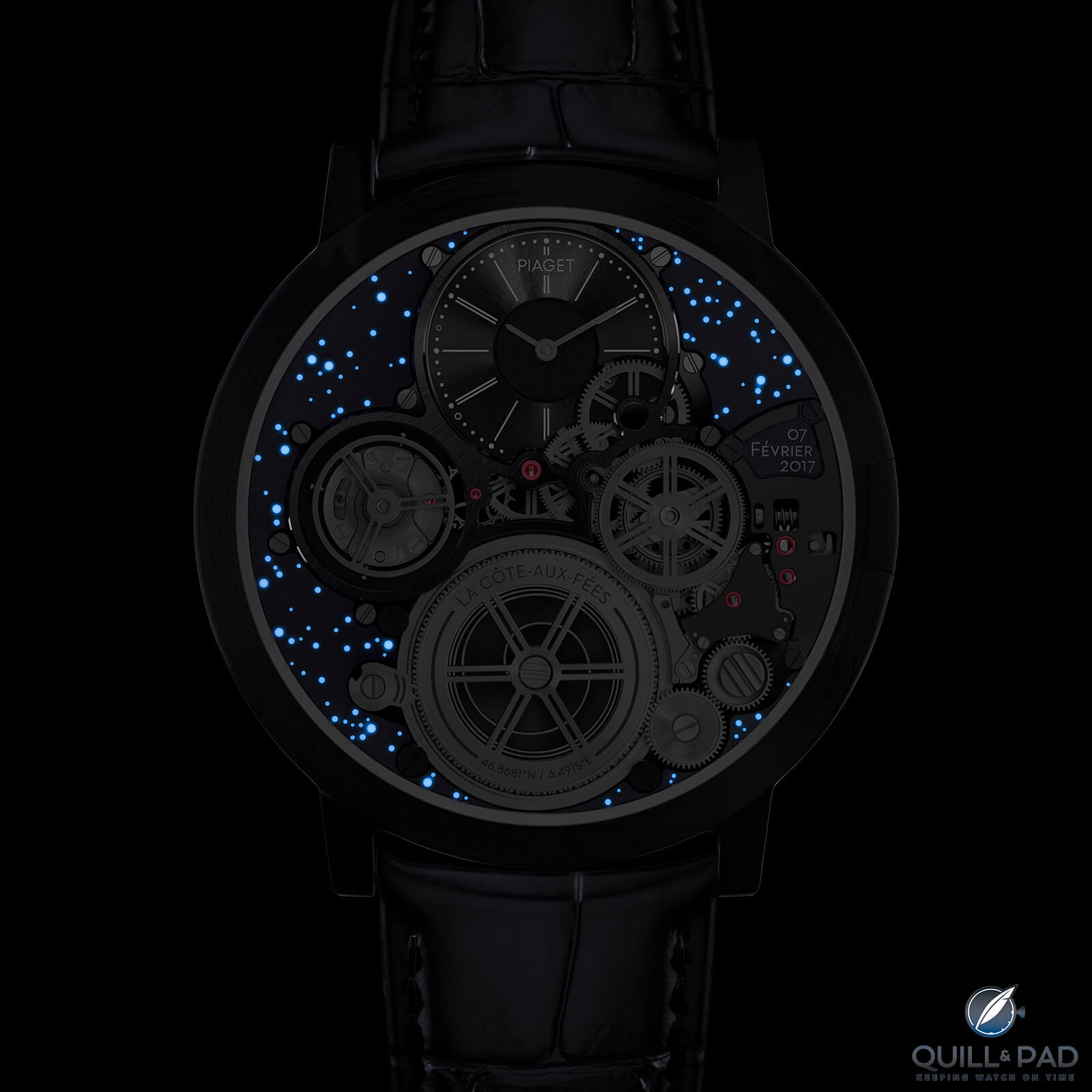 Like its Altiplano Ultimate Concept forebears, the 2022 model remains a mind-boggling two millimeters in height (which, for a fun reference, is thinner than many watch straps) thanks to its ingenious fusion of construction that defies the typical “layered” configuration of a watch.

In a nutshell, the movement is integrated with the case, which essentially serves as the base plate. And if you’re wondering about the crystal and its overall effect, it too is whisper-thin at just 0.2 mm – or about the thickness of a few human hairs. 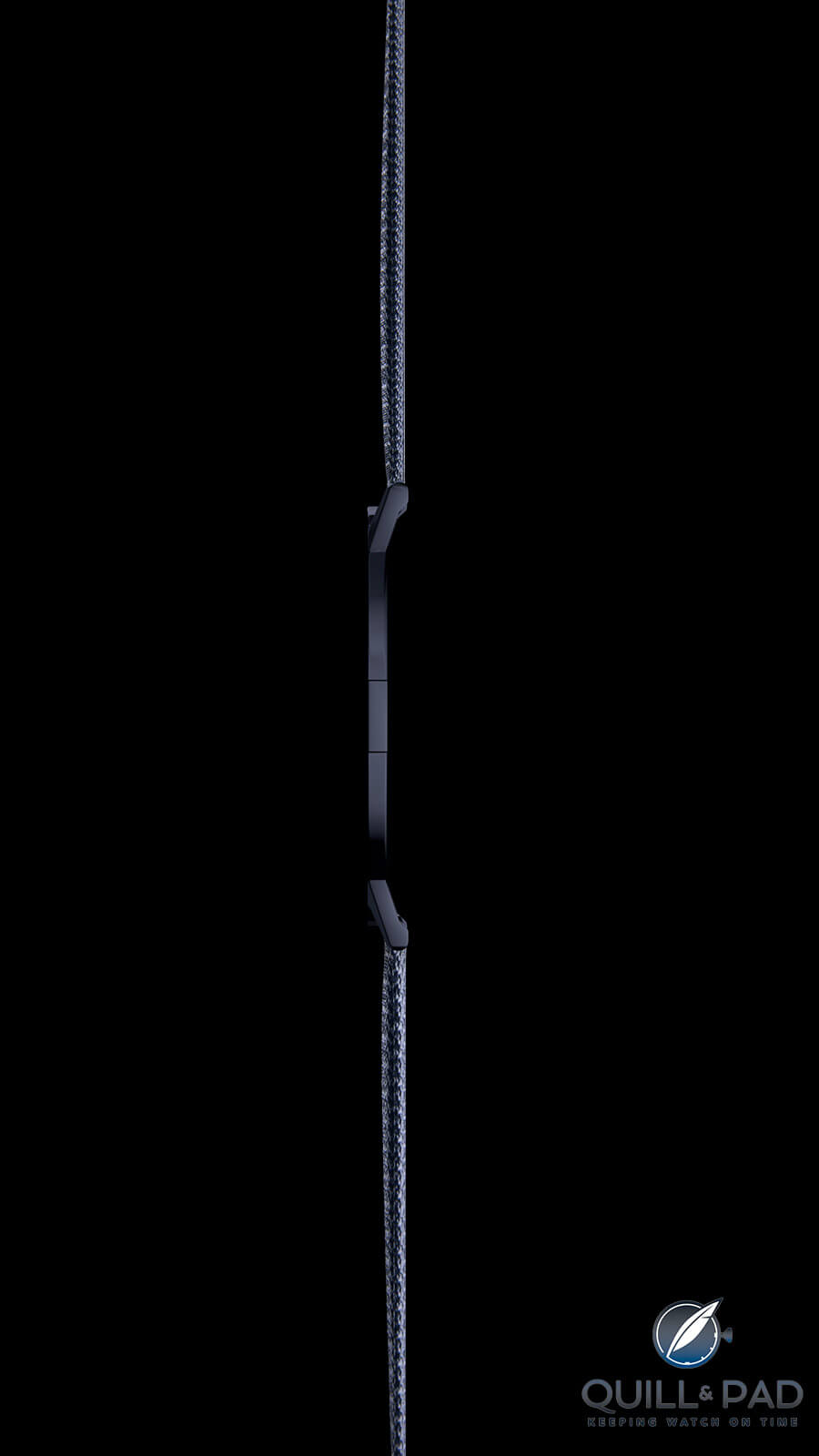 Piaget Tribute to the Altiplano Ultimate Concept Watch from the side 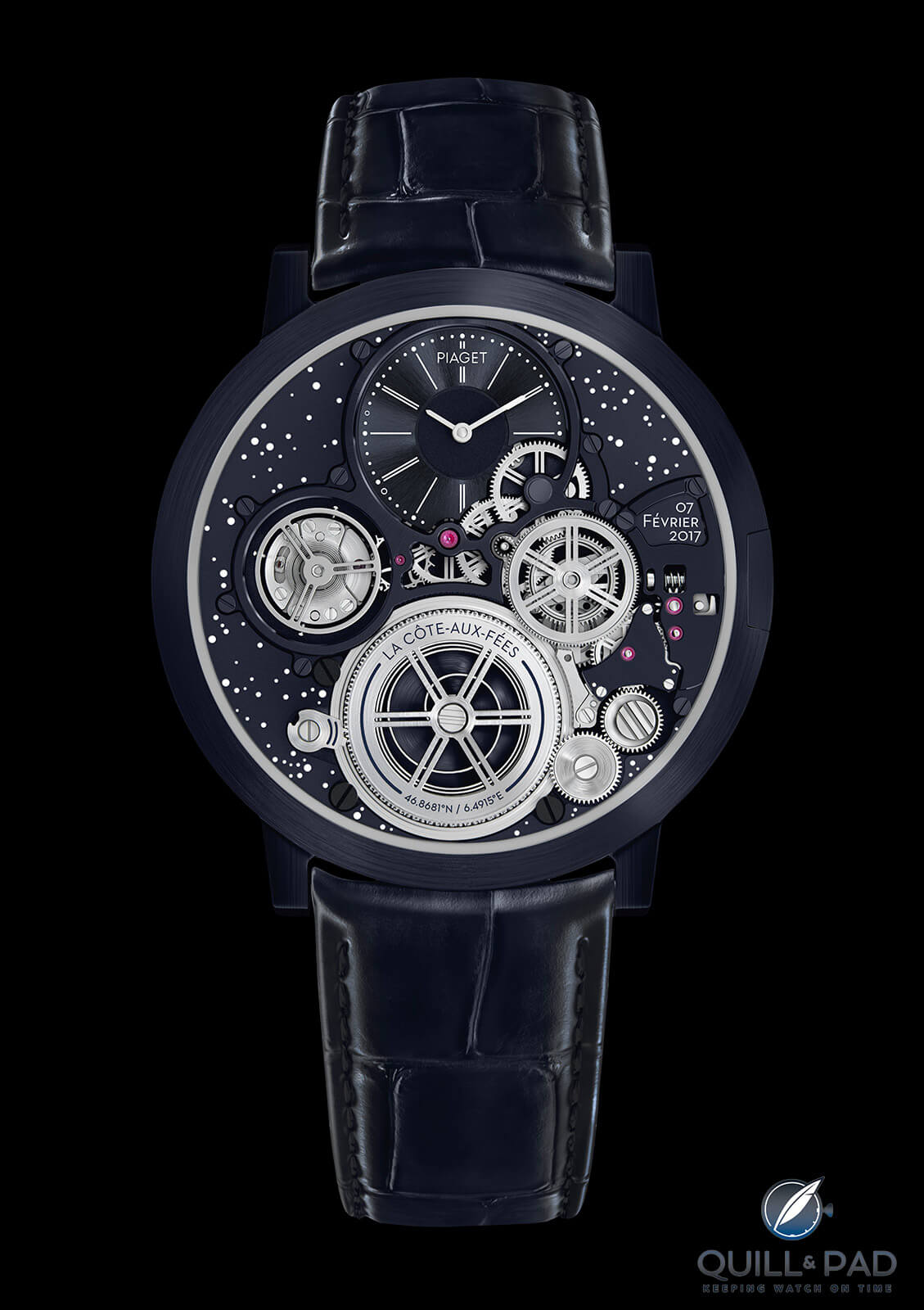 The Piaget logo at the top of the time dial at 12 o’clock is meaningful, sharing the same typeface used for the logo above the manufacture in La Côte-aux-Fées, the company’s birthplace and current home. The watch face features stars in the background painted with Super-LumiNova that replicate the sky above La Côte-aux-Fées at the exact date and time of this watch’s “birth”: February 7, 2017, at 2:30. 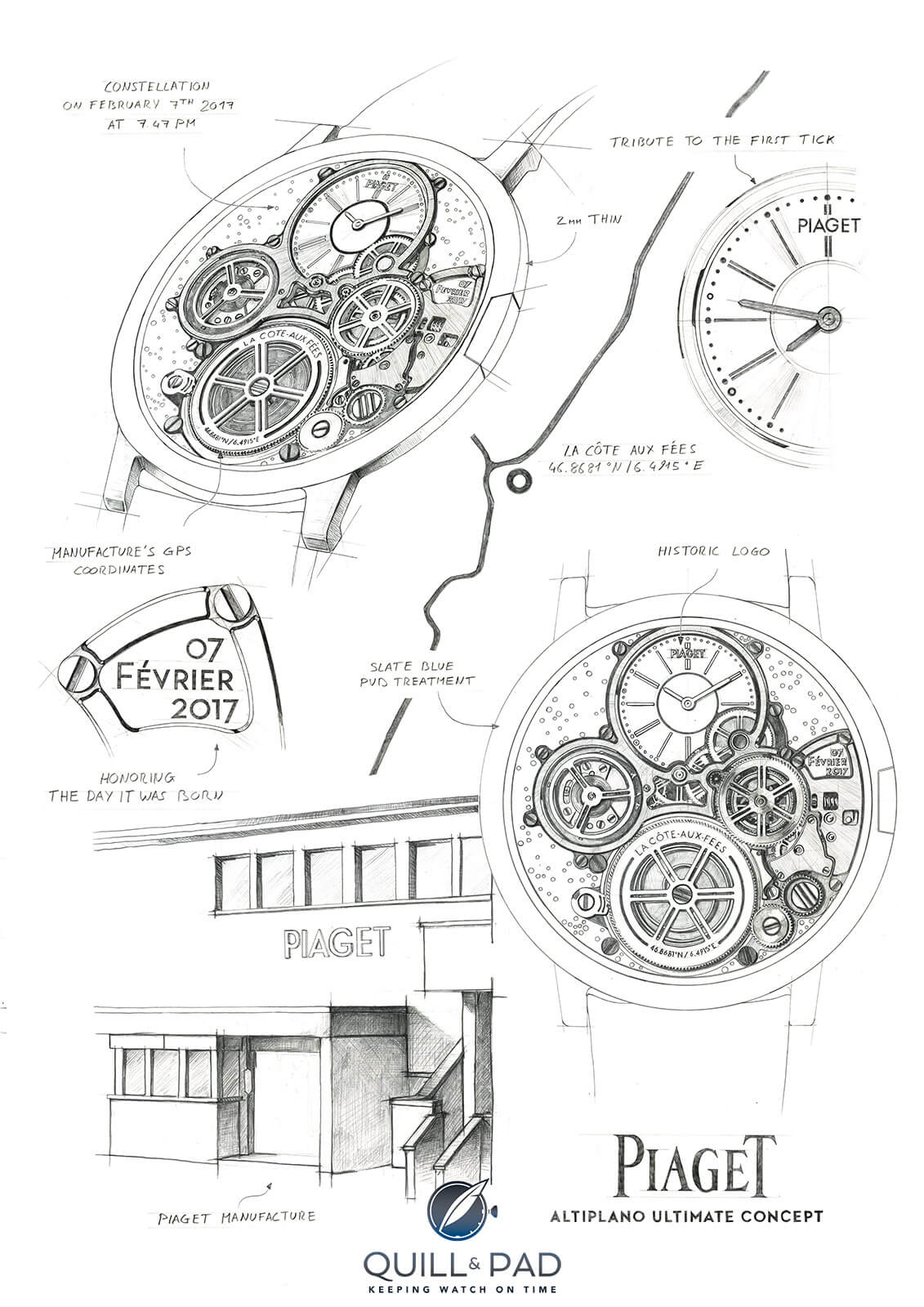 This date is also inscribed in a small window, while “La Côte-aux-Fées” is engraved on the ratchet wheel along with the manufacture’s GPS coordinates.

The Altiplano Ultimate Concept Unique Piece has a 41 mm case crafted in a cobalt-based, high-tech alloy that retains its rigidity – as in “resistance to bending” – despite its thinness. The base plate is sandblasted slate blue PVD in perfect counterpoint to the illuminated stars decorating it. The case back, barrel, and lugs are all satin brushed, while the case band is polished in elegant contrast. 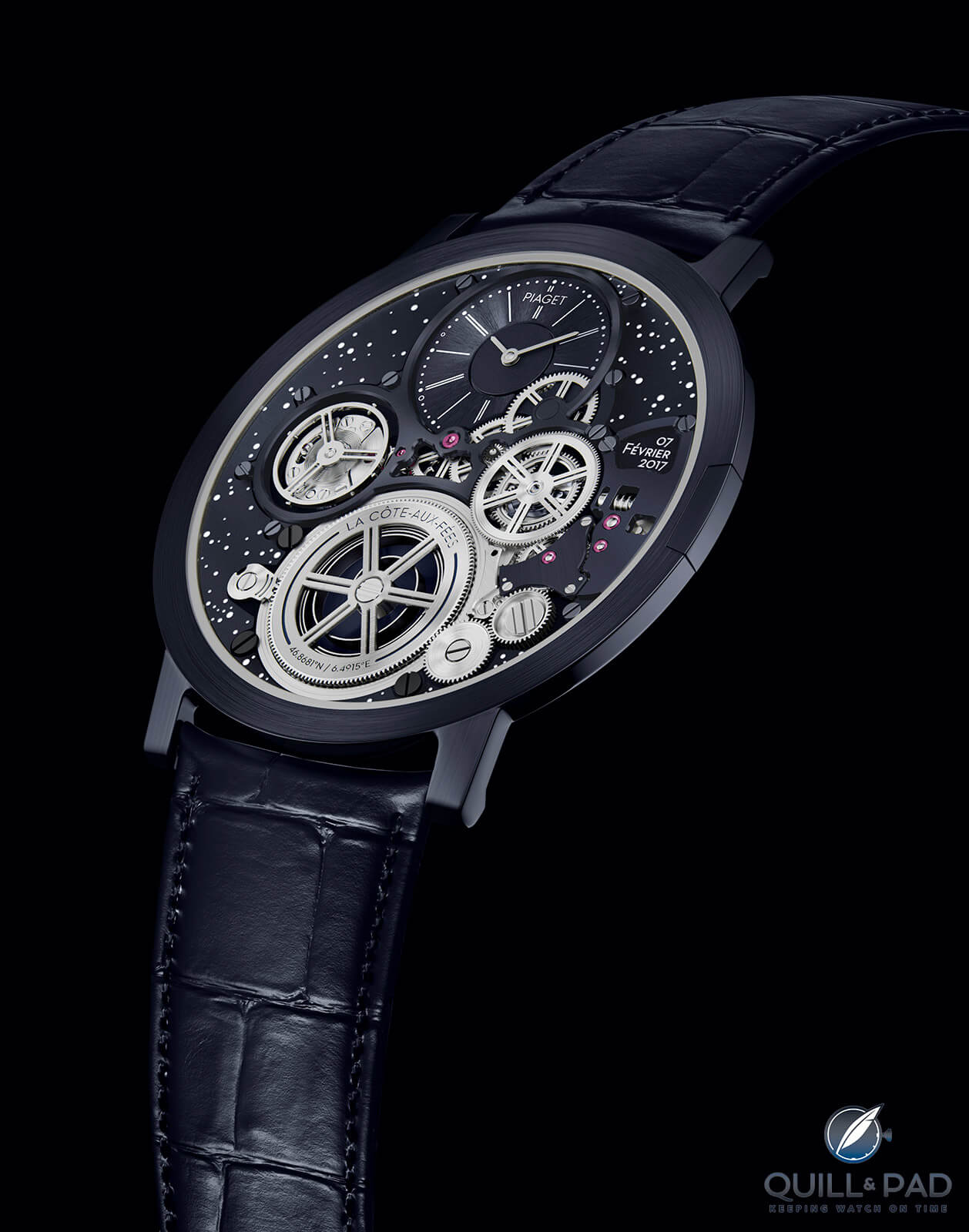 The 4 Hz hand-wound 900P-UC movement features hours and minutes and offers 40 hours of power reserve. Not surprisingly, the dark blue alligator strap on which the watch is fitted is also very thin, measuring just 1.5 mm.

Piaget Altiplano 900P Ultra-Thin: Contender For The “Galaxy On The Wrist” Award