Amazingly, it’s been 30 years since Montblanc first introduced the limited edition Patron of Art collection paying homage each year to significant historical art patrons. Patronage has played an important role in painting, architecture, sculpture, and even music throughout history, with the affluent and other influencers serving as sponsors in the production or commission of works.

Lorenzo de Medici – one of the most enthusiastic proponents of Renaissance culture in Italy – was Montblanc’s honoree that first year, 1992, and the octagonal sterling silver Lorenzo de Medici fountain pen remains one of my all-time favorites.

Like its forebears, this year’s Patron of Art Homage to Victoria & Albert is another fine example of Montblanc’s artistry in pen making. It is also the last Patron of Art collection the company intends to produce, so its elaborateness is as much a nod to this (sad) fact as it is to Montblanc’s increasingly proficient pen-making playbook.

The six writing instruments spin an interesting yarn about the British royal couple as passionate partners and art patrons, and their story is told via a variety of in-house decorative techniques that seem to get more intricate by the year.

A lot has happened to facilitate this evolution, including an increased focus on research and development. And Montblanc’s decision several years ago to make multiple editions of each of its Patron of Art pens is a huge opportunity to show off its métiers d’art, which includes engraving, stone setting, lacquering, pearl work, and more. It also allows for a variety of price points, in this case reaching to $162,500 for the diamond-studded Victoria and Albert LE8, the most limited of the four editions.

There’s another very important artisanal expression at play that might be overlooked: every handcrafted Montblanc nib is a miniature work of art all its own. Several discrete steps go into making each one, whether fitted on an expensive limited edition or an everyday writer, from the initial cutting of the gold to the final grinding and testing. Thus, every Montblanc pen owner holds a place in the company’s larger tale of craftsmanship.

I’ve always thought that Montblanc took the correct – and in my opinion, the only – stance in putting such value and care in producing its nibs since that’s where the writing experience is sourced, and this, at least for Montblanc, is where the buck stops. To sum it up, a beautiful pen with a bad nib “is like lipstick on a pig,” as some say here in Texas (for the record, I’ve never said this . . . ). 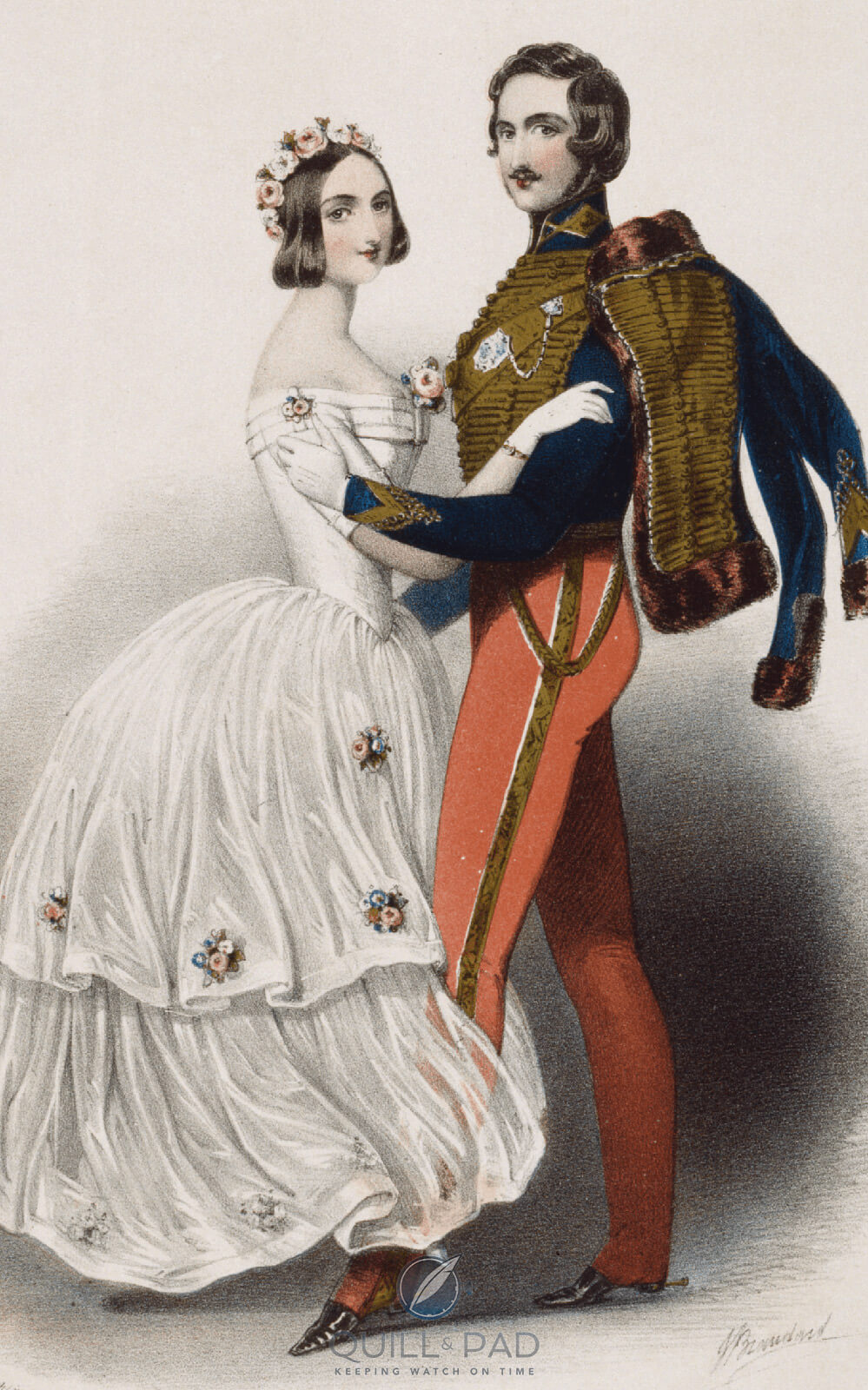 The new Homage to Victoria & Albert pen collection comprises two 4810 and two 888 editions, with one honoring Victoria and the other Albert within each edition. The LE100 and the LE8 editions each honor the royal couple together as one pen.

The LE4810 and LE888 editions are gorgeous couplets that move the royal love story from Victoria and Albert’s earlier years to her accession to the throne. In the interest of time and space, I’m concentrating on the LE100 and the LE8, whose tasteful details focus on the couple’s later years.

The LE100 has a faceted mother-of-pearl barrel and 18-karat champagne-tone gold fittings inspired by Victoria’s wedding dress décor. The couple had nine children, and the nine lines on the cone are in tribute to their large brood. The French sentence unis à jamais (“united forever”) is taken from a ring given to Victoria by her half-sister as a wedding gift, while a bracelet she received from her mother inspired the intertwined heart-shaped amethyst set in the cone. 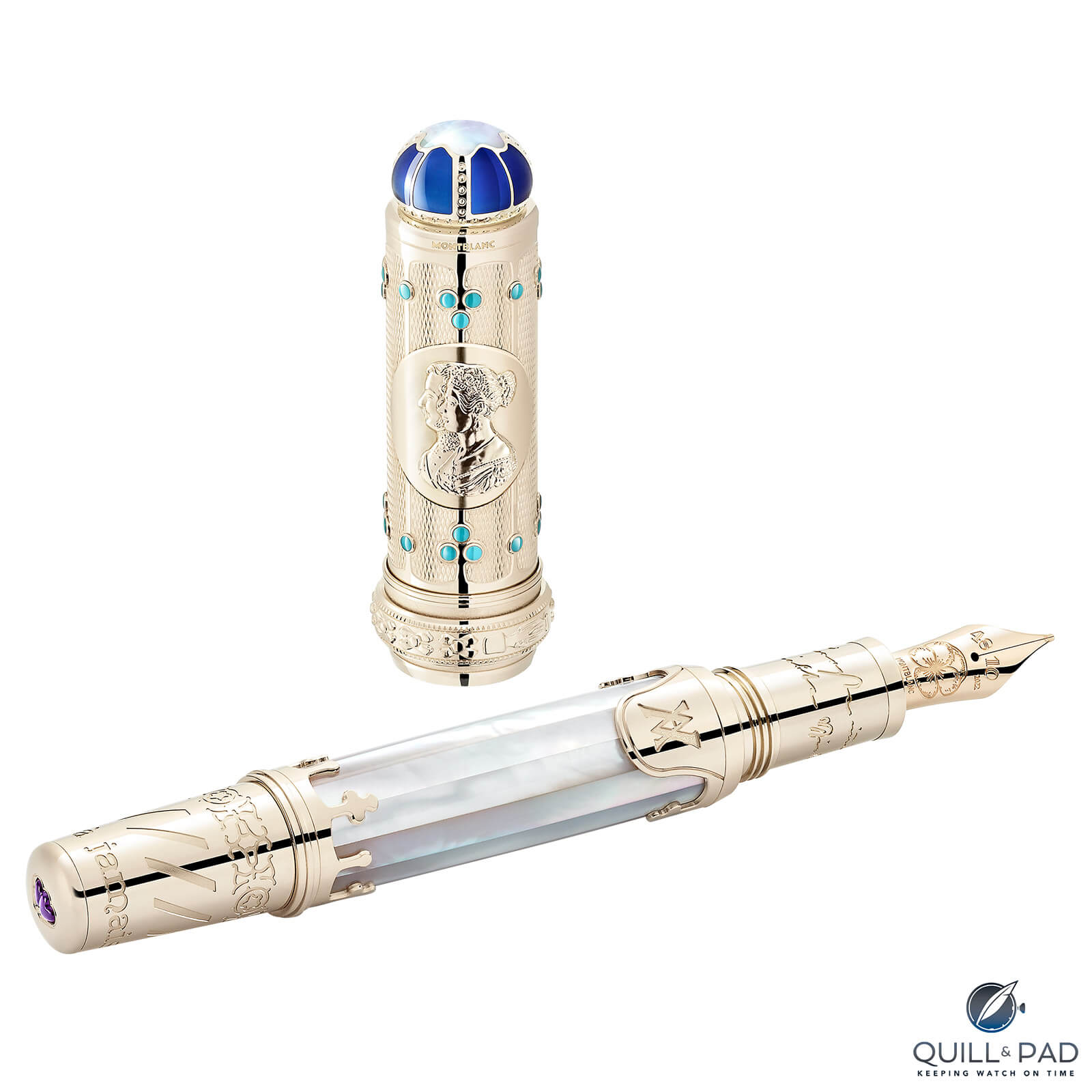 The 18-karat champagne-tone gold cap recalls the arches of the Crystal Palace, where the Great Exhibition of 1851 took place, and it is set with a sprinkling of turquoise stones that add both color and dimension. The hand-engraved profiles of Victoria and Albert on the side of the cap are modeled on the medals distributed during the Great Exhibition. The pen is crowned in royal blue lacquer – another pop of beautiful color – and the Montblanc emblem is in mother-of-pearl. 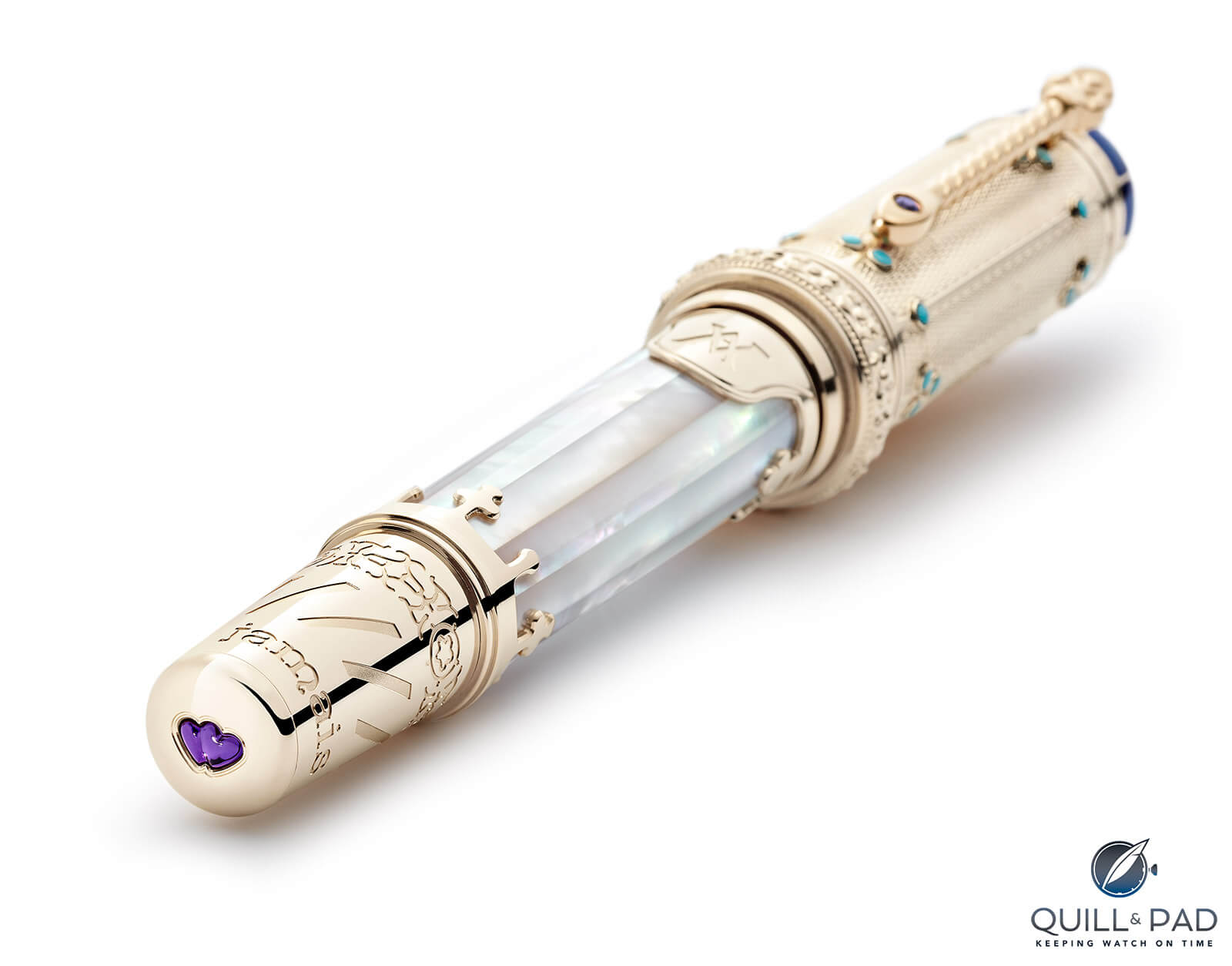 The handcrafted 18-karat champagne-tone gold-coated nib is engraved with a pansy, a symbol of affection, while an excerpt from a note written by Albert to his beloved on their engagement day is engraved on the gripping section. The detachable cap ring is decorated with an engraving of an orange blossom, the flower Victoria favored for her wedding. The opposite side of the ring depicts the couple’s linked hands as represented by German painter Franz Xaver Winterhalter.

This edition with its black onyx cap acknowledges the period of grief Victoria suffered after the loss of her husband. The black is interrupted by an 18-karat white gold inlay, which is a medallion with the hand-engraved monogram “VRI” (Victoria Regina Imperatrix). It opens to reveal a hand-engraving from a locket she wore, reading, “In Erinnerung an Albert” (“in memory of Albert”). 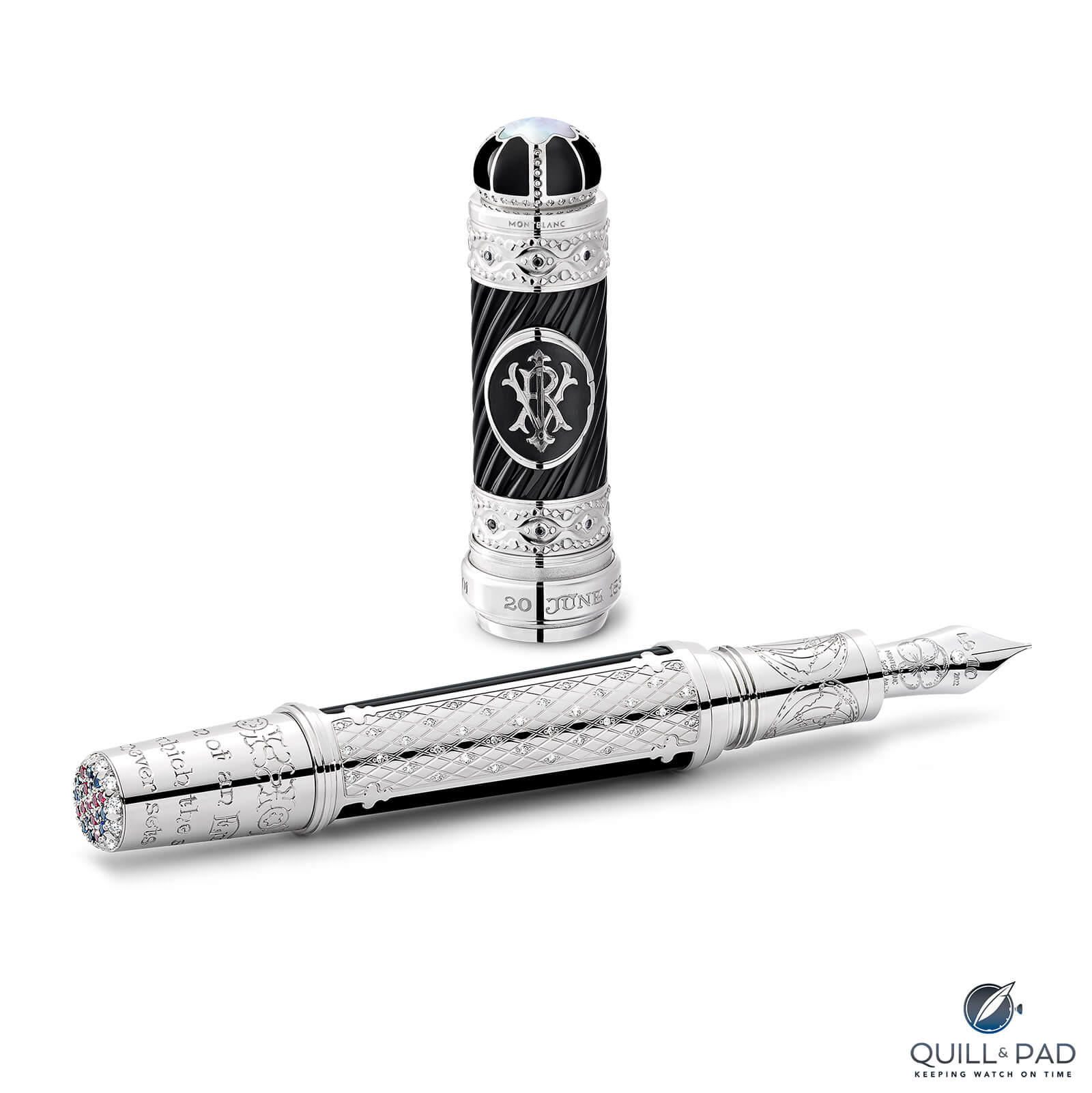 The rhodium-coated 18-karat white gold barrel is set with brilliant-cut diamonds and two black onyx inlays. The cone is engraved with “Queen of an Empire on which the sun never set.” Queen Victoria’s coronation ring inspired the gem-set cross and circle inlay that crowns the cone.

The 18-karat gold rhodium-coated nib is engraved with a pansy, and the white gold gripping section features a hand-engraving of a world map showing the British Empire under Victoria. The detachable cap ring is engraved with the dates of her reign, June 20, 1837 – January 22, 1901, while the cap is topped with a black lacquer crown set with the Montblanc emblem in mother-of-pearl.

Montblanc Takes A Voyage Around The World In 80 Days By Land, Sea, And Air With Pens And A Smartwatch

Why a Desert Dweller Designed a Dive Watch