I always look forward to the introduction of Montblanc’s annual Writers Edition pen collection, which has honored writers from William Shakespeare to Ernest Hemingway since 1992. A dedicated pen, after all, seems like the perfect tribute to a writer, particularly since the vast majority of Montblanc’s honorees are from the pre-keyboard days when writing implements were tools of the trade.

The Writers Edition pens are always distinctive and reference their subjects in a specific way. Sometimes subtly, sometimes not. This year’s edition is a tribute to the German Brothers Grimm – Jacob and Wilhelm – who collected and published folk tales such as Snow White, Rapunzel, Hansel and Gretel, and Sleeping Beauty during the nineteenth century.

There are four editions in the Montblanc Homage to Brothers Grimm collection, each inspired by the wooden walking sticks often used in centuries past by wandering storytellers traveling from village to village telling their tales.

The pens’ clips are intriguing, appearing as a gnarly root representing the roots of language (the Grimm boys were also instrumental in producing a comprehensive German dictionary) or the brothers’ facial profiles, depending upon the viewing angle.

The cap rings are engraved with the words “ES WAR EINMAL . . . ” (“once upon a time”). And the nibs are decorated with an engraving of flames to symbolize the fires around which children sat to hear the captivating stories.

The Homage to Brothers Grimm Limited Edition 8 is the most exclusive of the four editions, comprising just eight fountain pens. Its origin story is that of Snow White, and since everyone knows the tale I’ll forego its retelling here. But suffice it to say that its eponymous heroine eventually finds life and love in a predictably handsome prince after a meandering rough patch that includes a vindictive stepmother, hardworking dwarfs with issues of their own, and a poisoned red apple. And we wonder why kids have trouble sleeping. 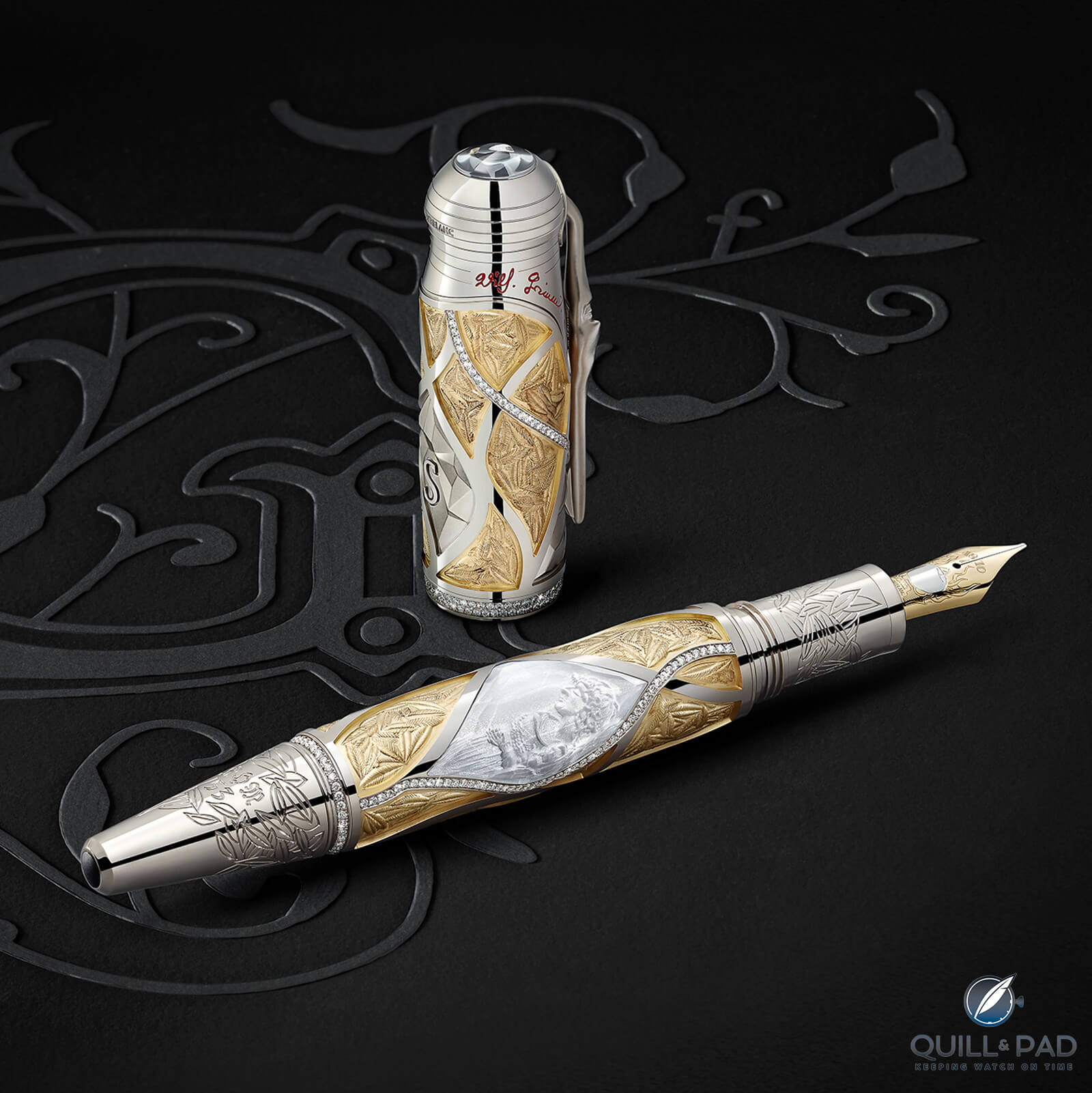 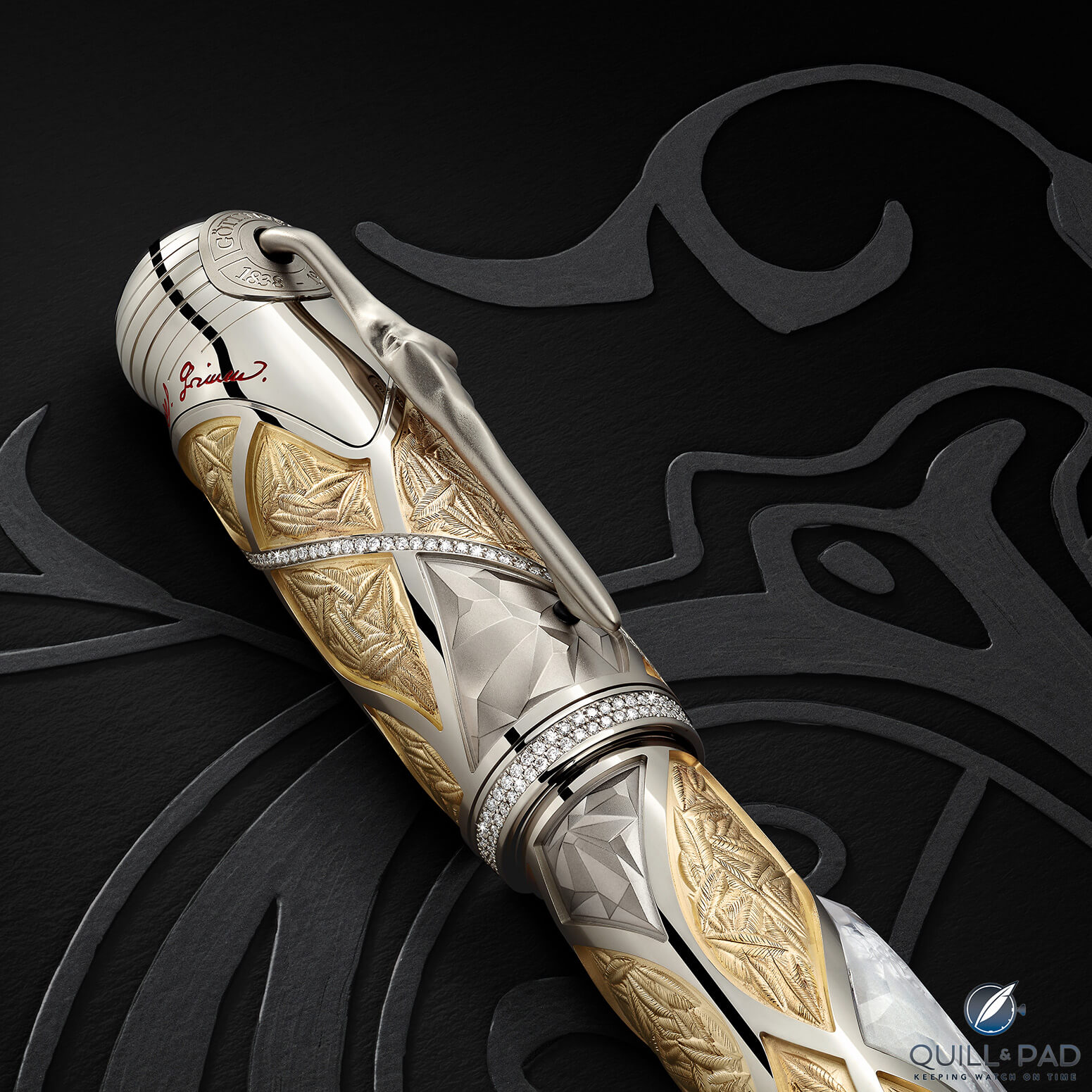 Cap of the Montblanc Homage to Brothers Grimm Limited Edition 8

In another reference to the Grimm brothers’ dictionary, this edition is crowned by a cast piece with artfully sculpted letters of the alphabet, A through F, covered by sapphire crystal. The cone is decorated with hand-engraved leaves and rubies and is set with a black spinel cabochon said to symbolize Snow White’s black hair.

The other editions in the collection are the Brothers Grimm Limited Edition 86, which tells the story of Hansel and Gretel, and the Limited Edition 1812 referencing Sleeping Beauty. Finally, a fountain pen, rollerball, ballpoint, and mechanical pencil (only as part of a set) chronicles the story of Rapunzel. 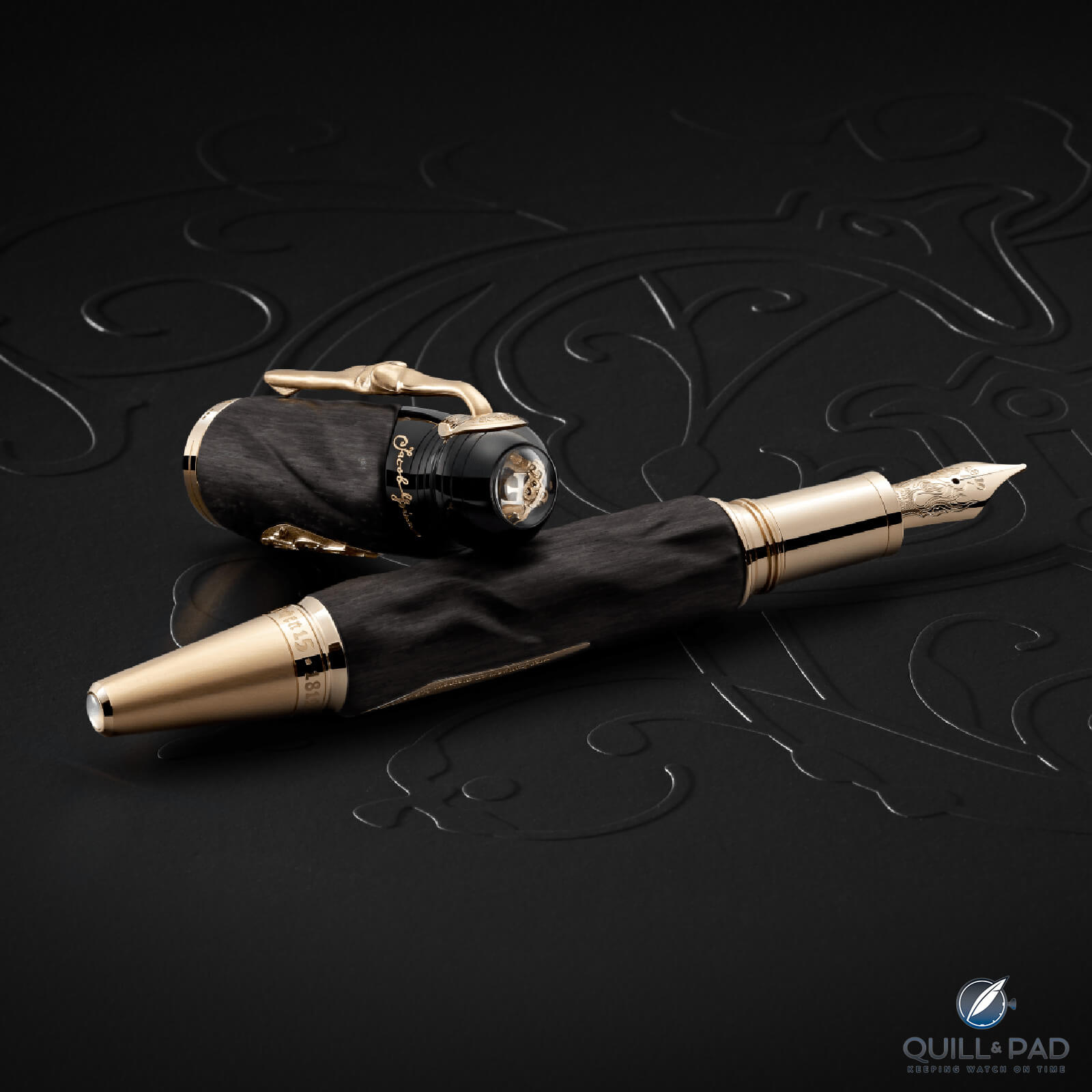 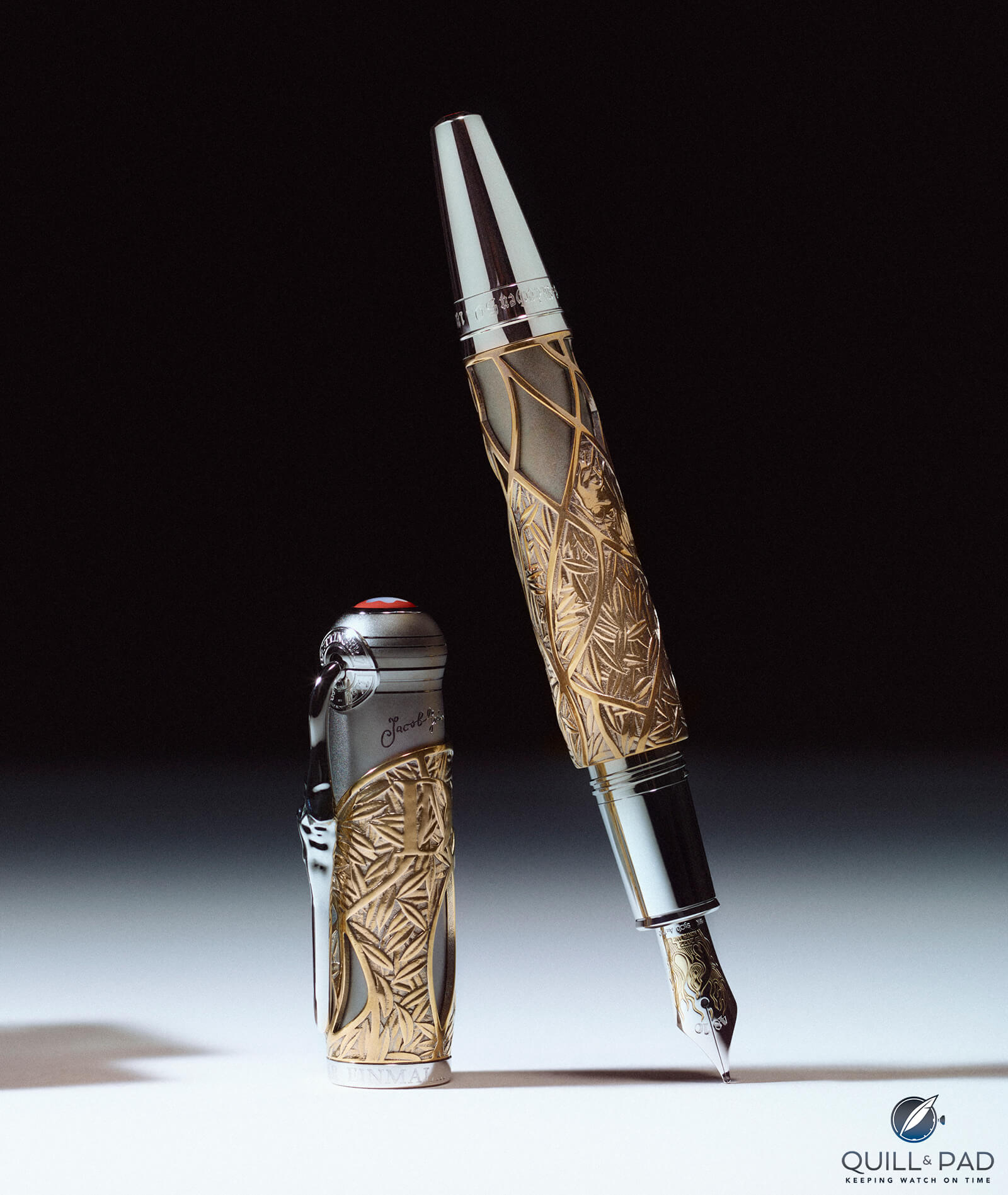 I’ve never been much of a fan of wood pens because I tend to associate them with “kit pens” from hobbyists that mostly comprise lower quality fittings. But there are some wood pens from major makers that have really taken this material up several notches. These include a few of Graf von Faber-Castell’s Pen of the Year editions and Montblanc’s recent wood marquetry First Ascent of the Mont Blanc, LE 5, from 2022’s High Artistry collection.

What I like best, aside from the organic appearance, is the unique feel of well-finished wood, which is much warmer than lacquers, resins, and metals. Wood can also take on an interesting patina over time, depending upon how it’s been treated. 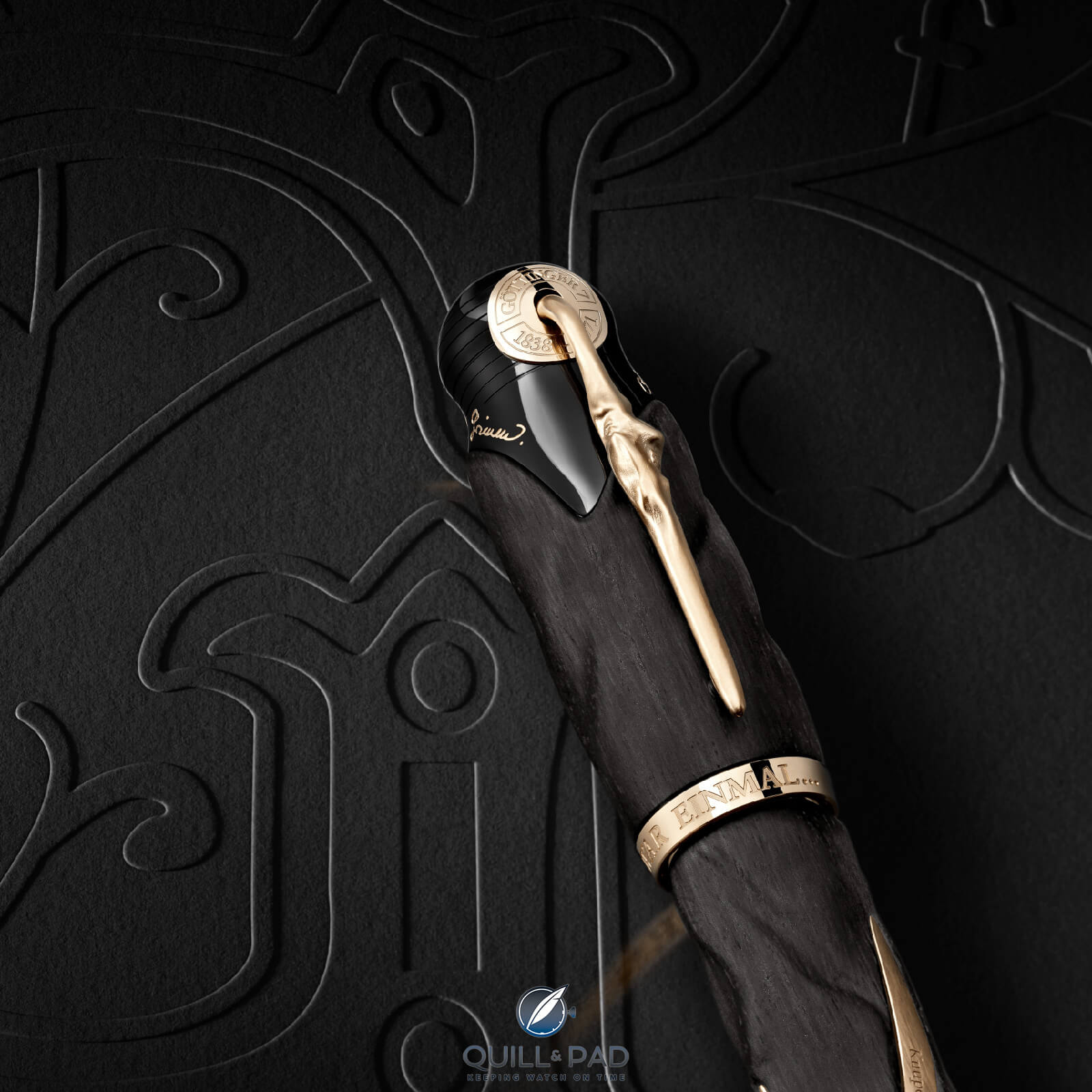 The cap and barrel of the Homage to Brothers Grimm Limited Edition 86 are made from blackened ebony wood reminiscent of the dark forest where Hansel and Gretel is set as well as the fires that burn the witch at the end of the story (yet another soothing bedtime image). The deep darkness of the material sharply contrasts with the gold inlay “flames” on the barrel, resulting in an elegantly spare look that relies on shapes and textures for its drama. 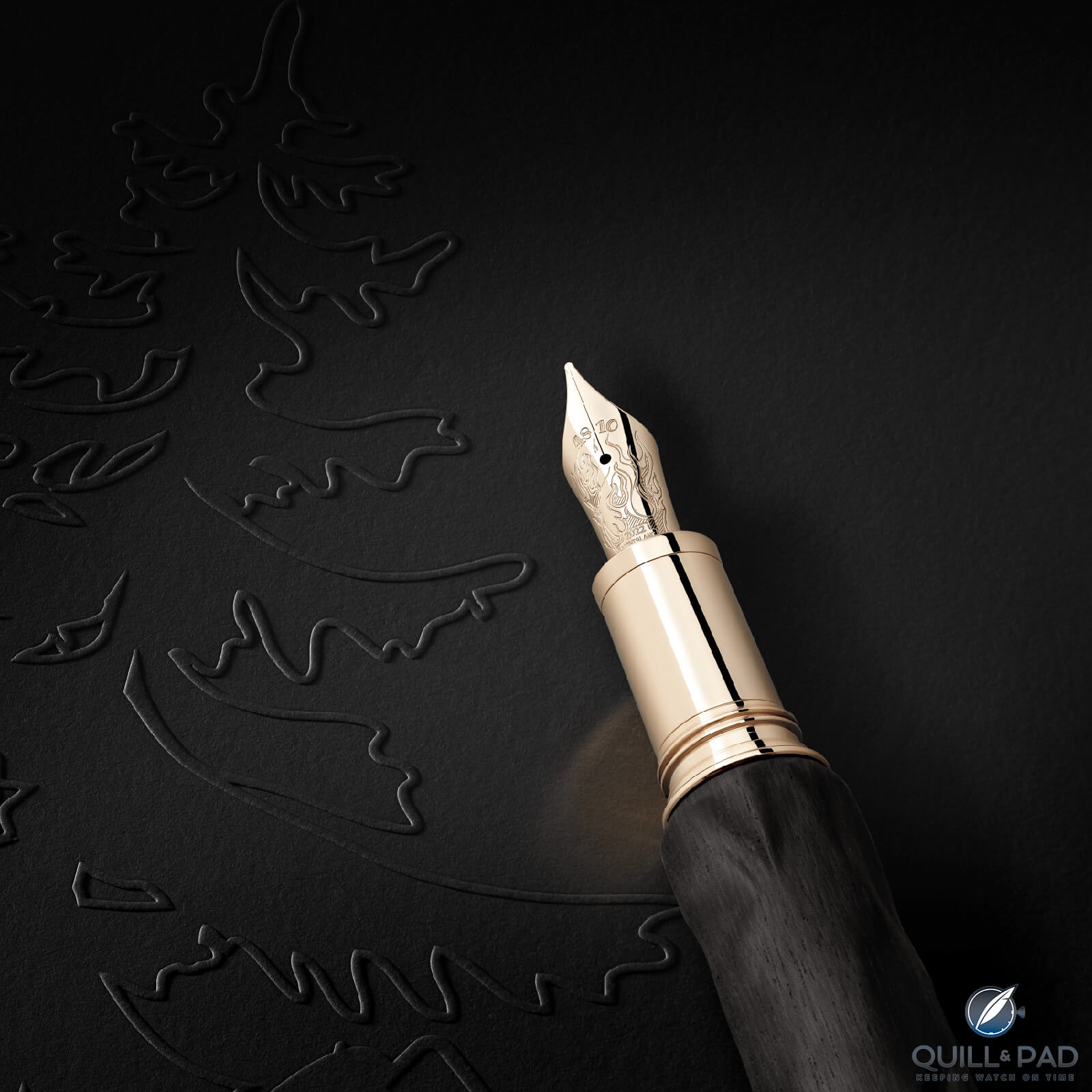 The two gold inlays feature these famous words in their original version: “Knusper knusper knäuschen, wer knuspert an meinem Häuschen?” (“nibble nibble like a mouse, who is nibbling at my house?”). The limitation of 86 fountain pens is a reference to the number of fairy tales published by the Brothers Grimm in 1812 in the first edition of Children´s and Household Tales.

The Vulcain Cricket is Back!