A while ago, friend and fellow journalist Victoria Gomelsky asked me for a subjective listing of my “top” Patek Philippe watches of the twenty-first century. She didn’t give much direction, preferring, I assume, to see what kind of answers she would get from the people whose opinions she asked (eight in total).

Victoria published her findings in an interesting story on Robbreport.com on December 26, 2019; however she cited only one of my top five Patek Philippe models. Below is my full list.

Note that these are simply my personal favorites among Patek Philippe’s modern offerings, not necessarily the models I think will be future giants on the secondary market – like the stainless steel Nautilus currently all the rage in collector’s circles, which I did not choose for this list.

All of my picks will, of course, be very expensive on the secondary market, though, should they arrive there.

Patek Philippe is unquestionably one of the most traditional manufacturers in the world of haute horlogerie. And until the turn of the new millennium, the Geneva-based icon utilized nothing but metal and synthetic ruby in its movements. 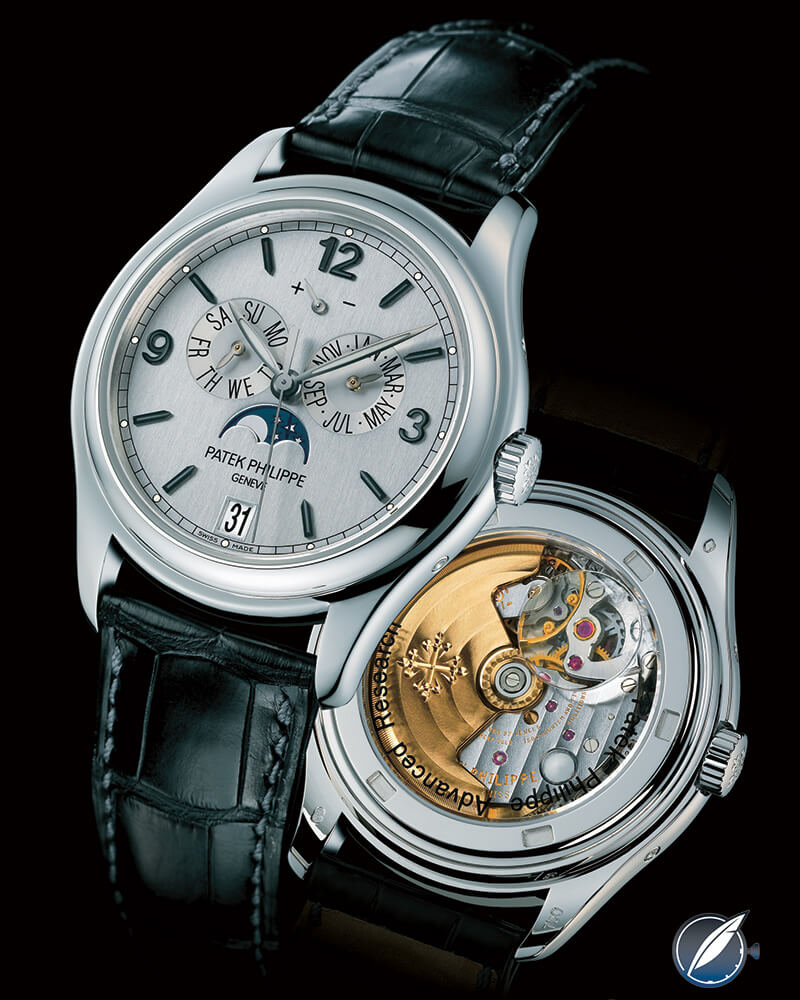 When the brand finally introduced a watch in 2005 – Reference 5250 Advanced Research – utilizing the new materials it had been researching for some time, I found it to be nothing short of a revelation: Patek Philippe had managed to add what was then considered space-age material to its very traditional style of watchmaking without changing anything about itself.

Not only did this model catapult the watch industry’s most traditional house into the modern age, it did so by combining the much-discussed technology with a calendar style the Genevan brand invented: the annual calendar.

This watch was and remains a fascinating study in keeping a traditional manufacture fresh.

I have a soft spot for both cushion-shaped cases and manufacturers who introduce new complications for women before adding them to a men’s watch. 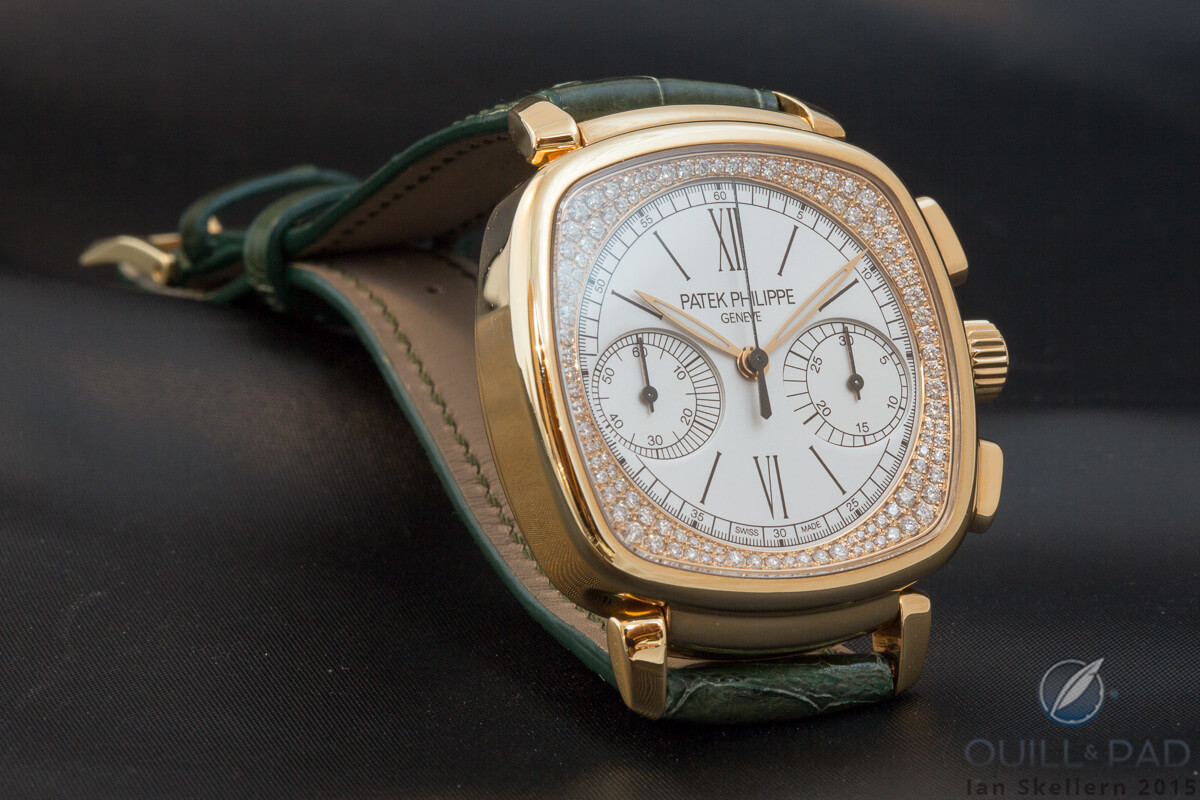 And this is exactly how Patek Philippe approached its first in-house chronograph movement: by first paying tribute to its female clientele and – wonder of wonders – housing it in cushion-shaped gold case.

Ladies First’s caliber was brand new and specifically designed to power the next generation of Patek Philippe chronographs and perpetual calendars; it was named 29-535 in honor of its dimensions.

This watch is a looker both inside and out. And its historical significance cannot be overstated.

Every year, Patek Philippe has a wild output of one-of-a-kind pieces crafted with the help of specialist artisans. These pieces, though they will appeal to only a handful of people in the world, are exquisite with their archaic use of centuries-old crafts like enamel. And very often these crafts are not applied to wristwatches but rather pocket watches or dome clocks. 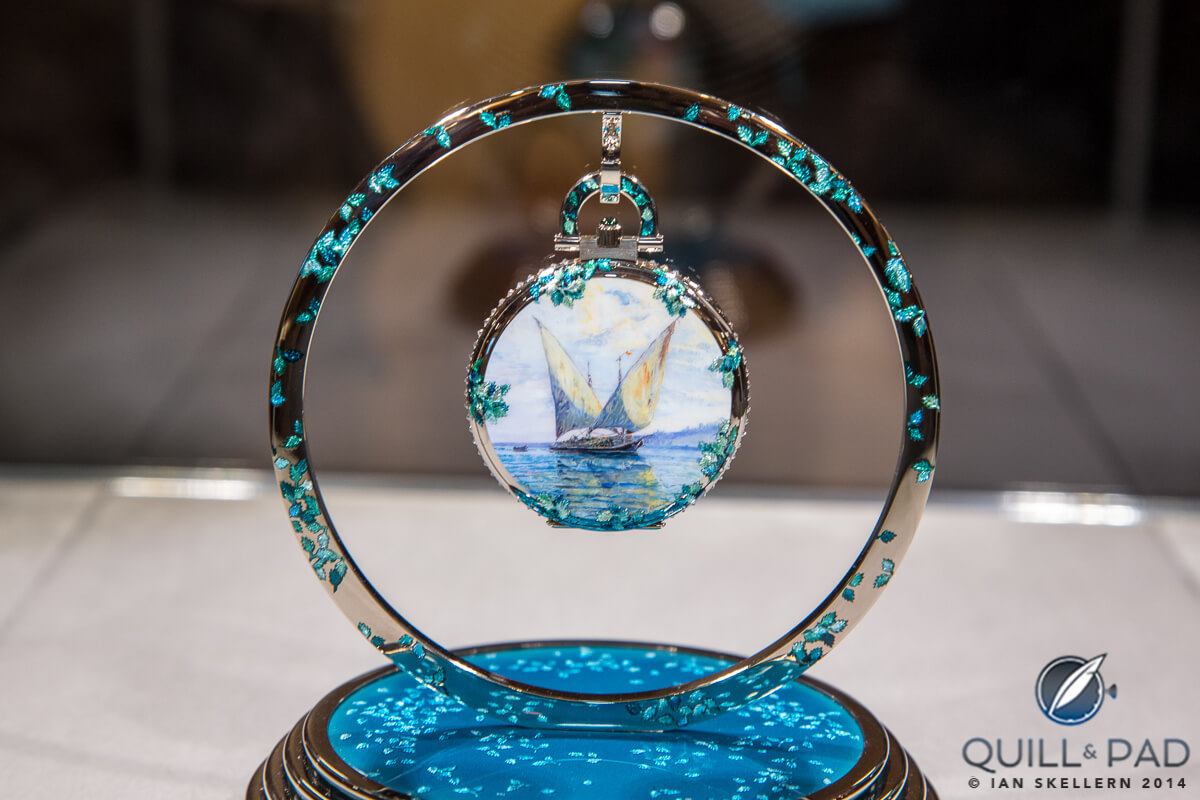 And so it is with the unbelievable Dawn on the Lake pocket watch, whose embellishment was created by master enameler Anita Porchet, included in the company’s offerings in honor of its 175-year celebration in 2014. 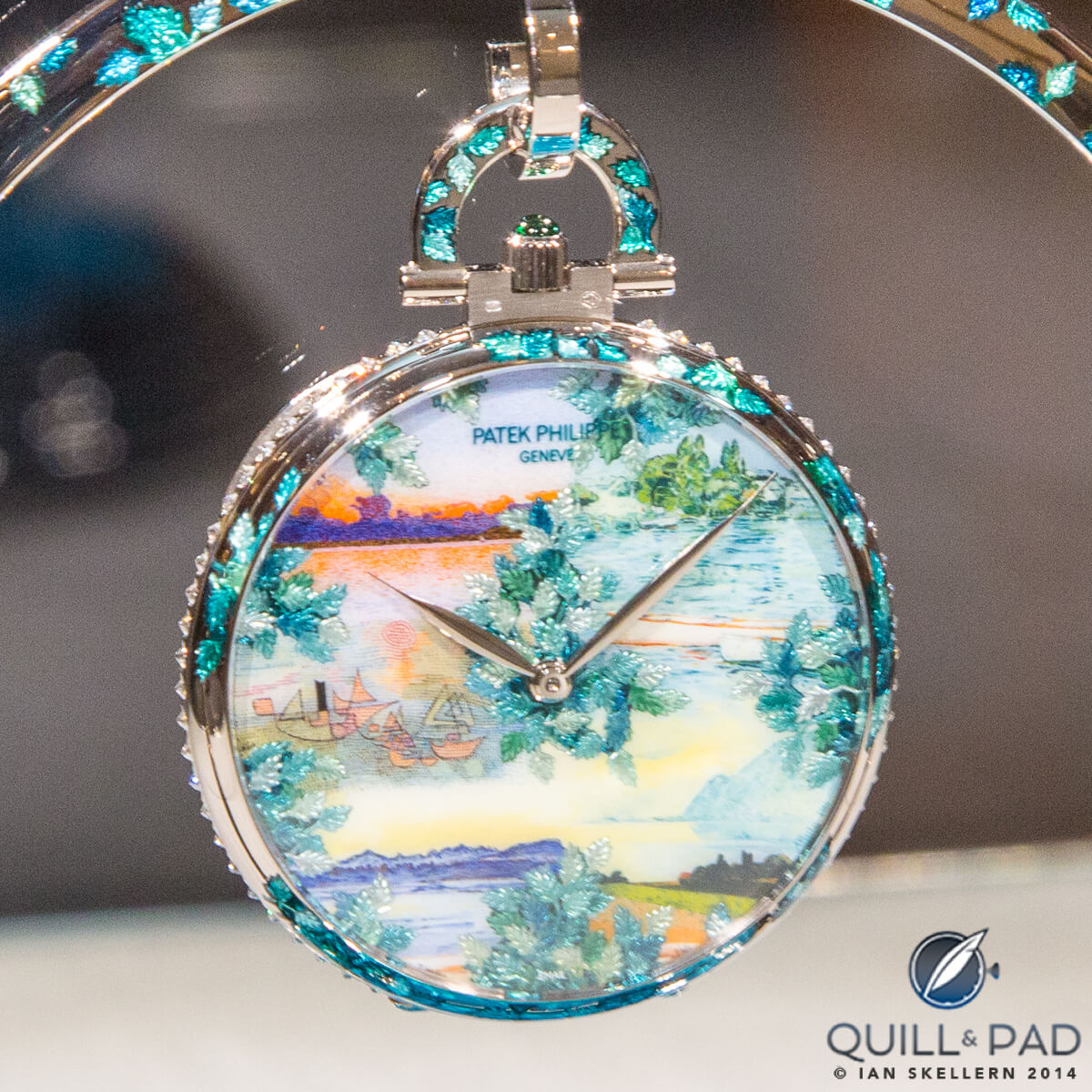 The front dial comprises five separate miniature enamel paintings blending into each other, inspired by five different artists of the same epoch (and each from a painting belonging to the Stern family’s collection): Paul Klee, Alexandre Perrier, Edouard Valent, Walfter Mafli, and Ferdinand Hodler. 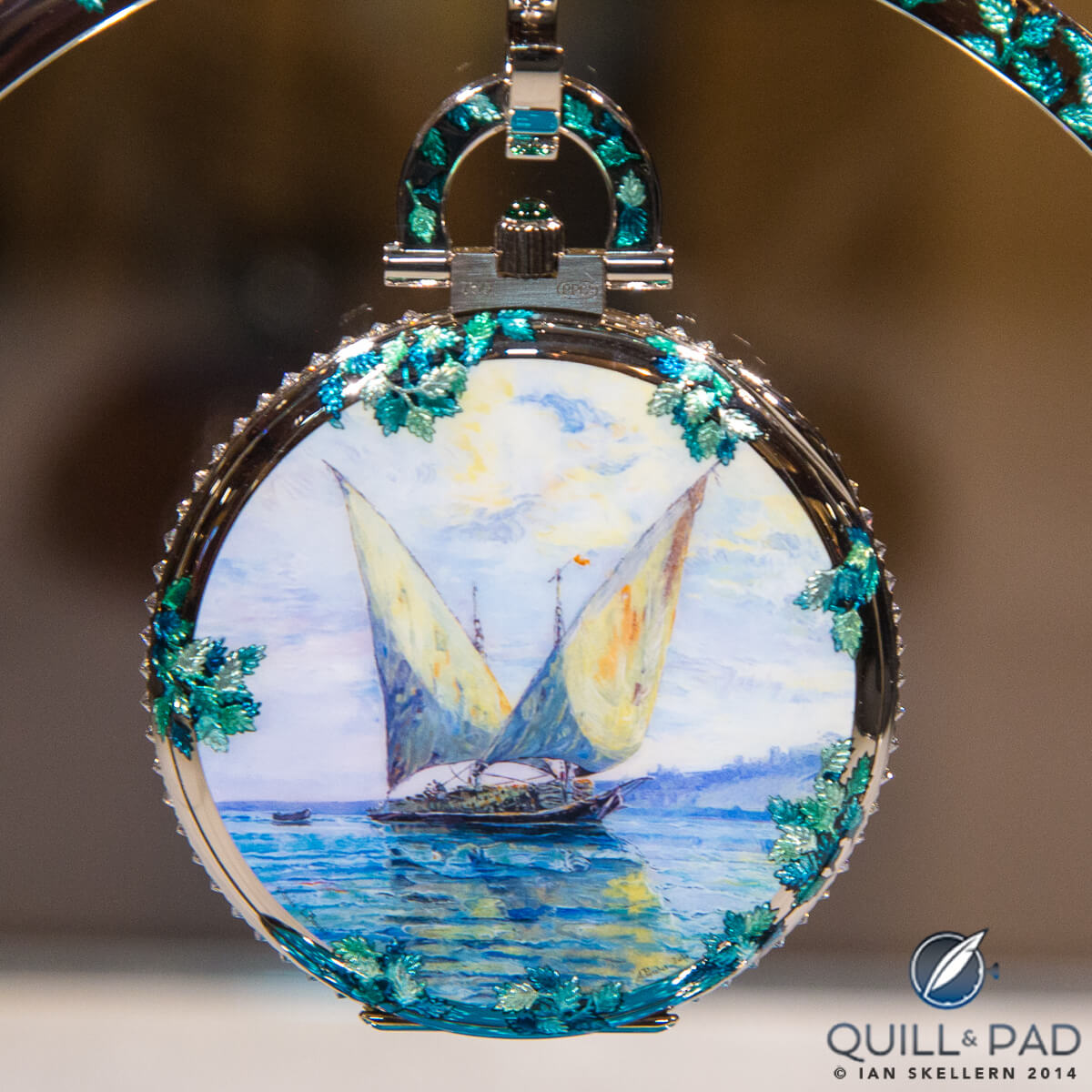 A sixth one depicting Lake Geneva covers the outside back cover of the watch’s hunter case. And the circle posing as the frame for the watch – simultaneously symbolizing infinity and time – as well as its base, are embellished with paillonée enamel leaves made from flecks of real silver. Some of the exquisite enamel is fashioned as ivy, interspersed with diamonds, which “hangs over” the main piece of art.

See more about this work of art in Dawn On The Lake: Celebrating Patek Philippe’s Grandiose 175th Anniversary With Art And Collaboration.

Here again is a high complication packed in an outfit meant to appeal to women – and I love it! 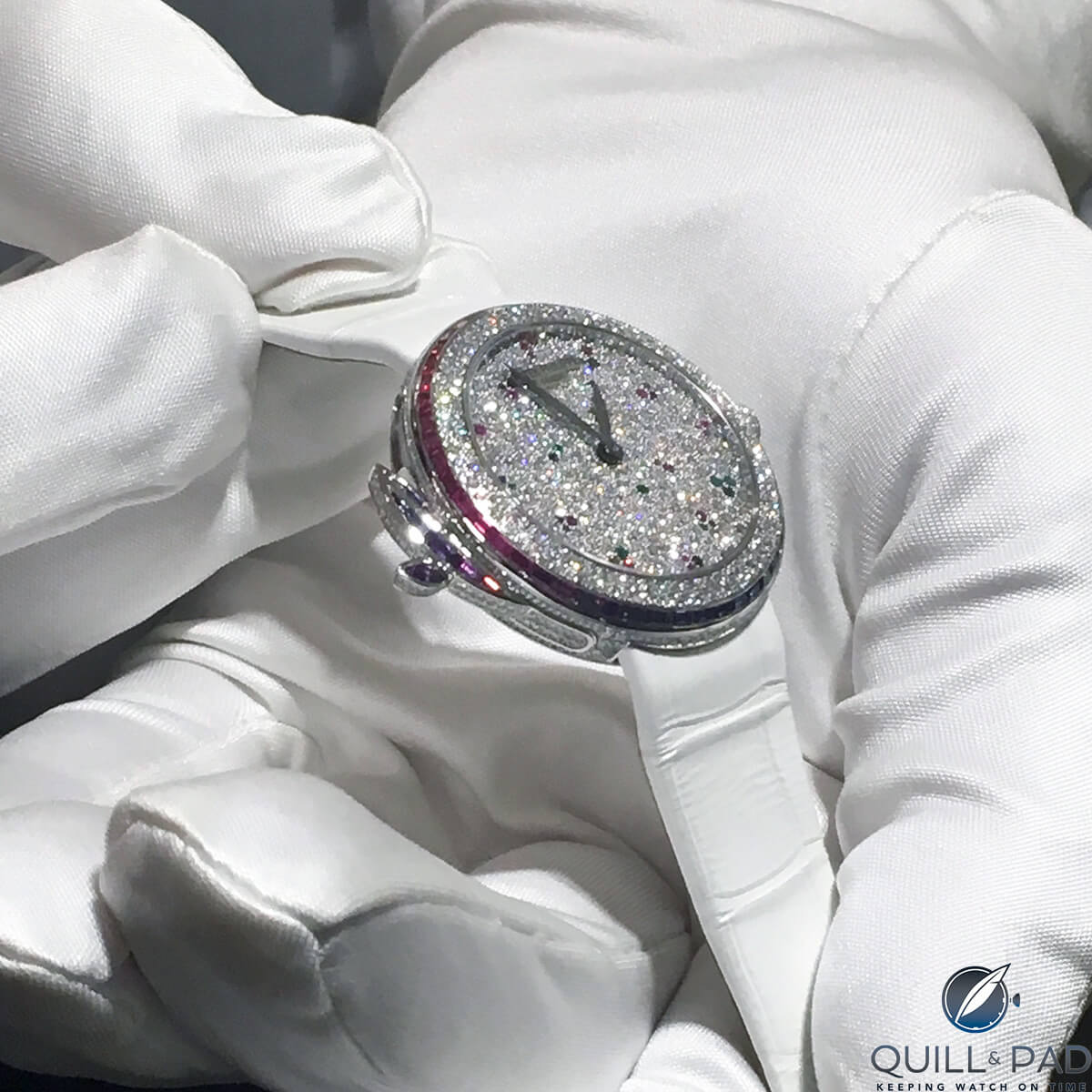 Placing such a complicated mechanical treasure in a gold-encased space of 34.7 mm diameter is no mean feat. And not only does it look fascinating with its snow-set diamonds and colorful sapphires, but it sounds strikingly good – much better than I would have surmised given all the gold and precious stones blocking the sound from resonating.

And, of course, I love that this beauty, which was the first high-jewelry high complication by Patek Philippe, is made with women in mind.

I am an unabashed Calatrava fan; this elegant line is my favorite among Patek Philippe’s pillar families. Usually if someone asks me, I’ll say my preferred models within it are the simple references with the traditional clous de Paris guilloche bezels (as in a Reference 3602). 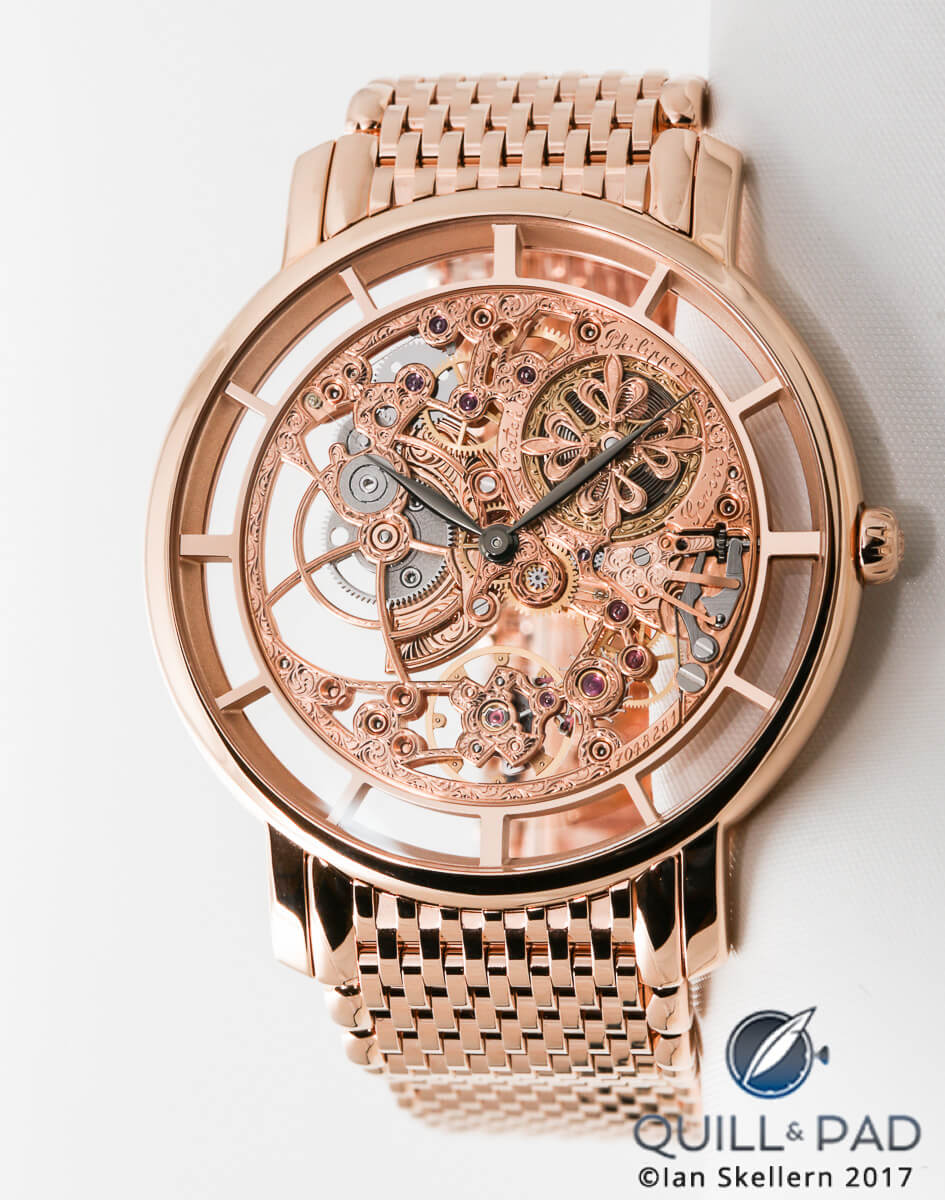 But that was before I set eyes upon the latest skeletonized version of the Calatrava. Though Patek Philippe has been skeletonizing its Caliber 240 since 2008, it’s this version that really captured me with its silky-smooth red gold bracelet, exquisitely artistic skeletonization, and engraving of the automatic mechanism with micro rotor.

The complete skeletonization of this movement takes more than one week of work, after which the engraver invests another 130 hours to add a cornucopia of arabesques and volutes decorating the highly visible metal remaining in the movement.

The movement of Reference 5180 is then plated with pink gold and polished before being framed by a movement holder ring, which is also skeletonized down to 12 spokes that serve as hour markers. 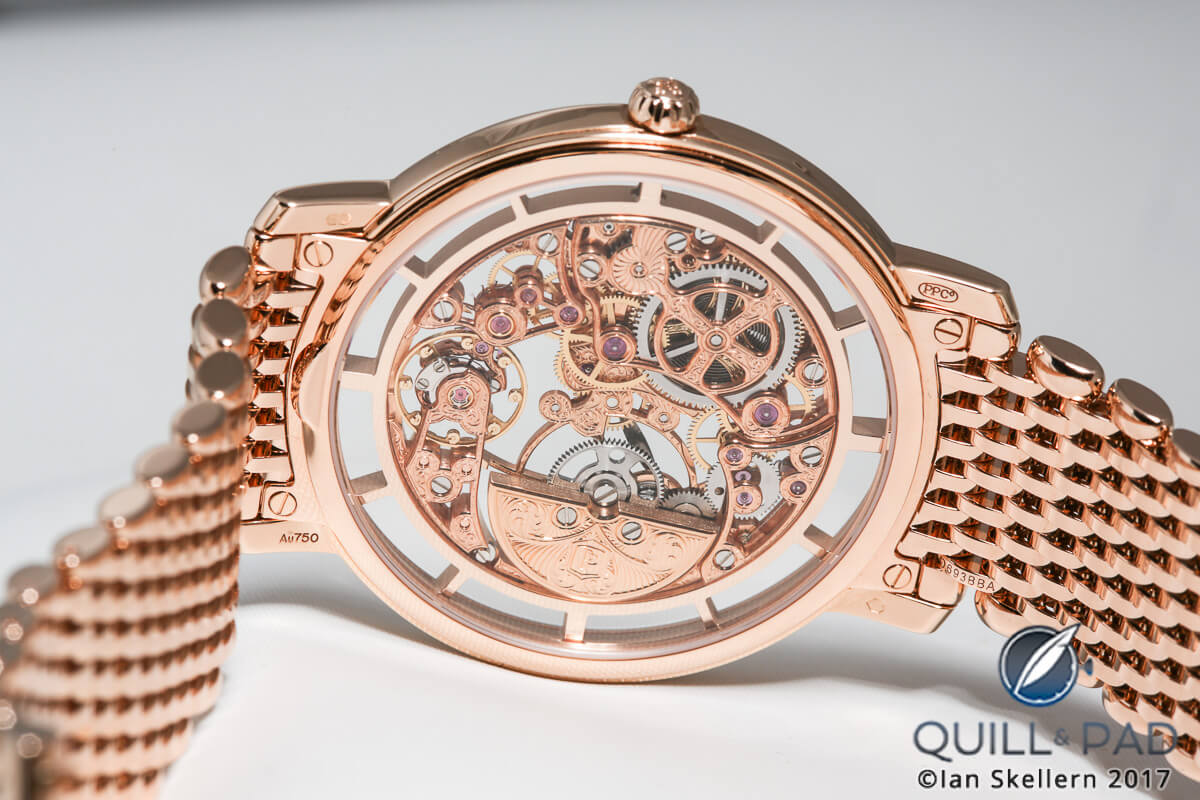 And let’s not forget the bits of silicon found in its balance, too, proving it’s a product of today! The Calatrava Squelette Reference 5180/1R-001 delivers the best of Patek Philippe on every front.

* This article was first published on January 9, 2020 at My Top 5 Patek Philippe Timepieces Since 2005: A Very Subjective List.

Give Me Five! All 5 Of Patek Philippe’s Advanced Research Limited Editions

Extraordinary: The Largest Grouping Of Patek Philippe Minute Repeaters In One Place

Give Me Five! 5 Skeletonized Watches That Came Out Of The Closet At Baselworld 2017 From Patek Philippe, Chanel, Graff, Manufacture Royale And Glashütte Original.