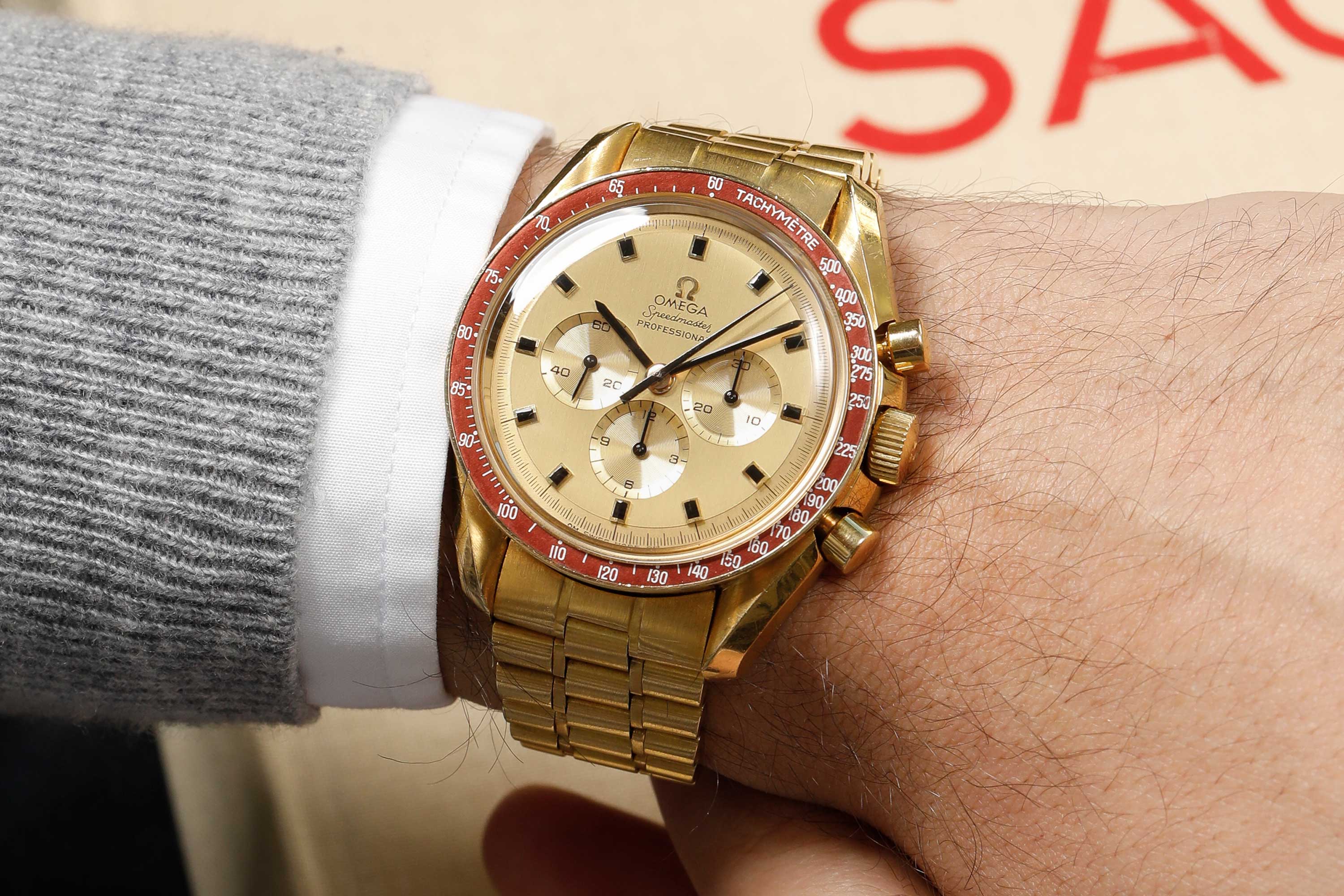 As the watch collecting community begins to dust down its paddles and limber up its collective bidding arms, the team at Phillips has shared with us some pictures of a selection of Omega lots going under the hammer this weekend.

As you guys know, we love nothing more than some fine vintage Omegas here at Revolution and thought you’d like to see a few of our favourites from the sales.

The Geneva Watch Auction XIII runs this weekend on the 8th and 9th of May and you can find all the relevant info on the lots and links to watch and bid live on the Phillips website.

Of all the watches that Omega have made of the years, the venerable brand’s chronograph is a watch that we hold dear. We love it so much in fact that we created the Temple of Speed, a permanent collection of interesting Speedies that are housed in Singapore at the Revolution Watch Bar. Lot 20 is an 18k yellow gold Speedmaster that was launched to celebrate the successful moon landing of 1969. Made in a limited run of 1014 examples, the first 32 of which were offered or given to people including the United States President and Vice-President and the astronauts. Numbers 33 to 1000 were retailed commercially and the last 14 given to other astronauts and other personalities. The offered lot has case number 833 and remains in really strong condition.

There are certain watches that capture the imagination of collectors beyond all others. This has to do with a combination of compelling mythology, stunning and unique looks, and just the right amount of rarity — meaning it was produced in enough numbers that you can find one if you look hard, but at the same time it’s far from easy. To us, that watch is the 145.012-67 “Special model fitted with orange chronograph hand”, known as the “Ultraman”.

Sticking with the Speedy theme, this watch is a seriously cool looking watch with an equally cool story. In 1975 the Soviets and Americans put their political differences aside and collaborated on a mission to dock the Apollo and Soyuz spacecraft. The project was a success and one year later the Italian Omega distributor De Marchi commissioned a limited run of Speedmasters to commemorate the event. The Soyuz watches were based on the reference 145.022 but featured a modified case to allow for the large pushers, which change the aesthetics of the watch. The dial features the ‘Apollo Souyuz’ patch logo and the caseback also features a commemorative engraving. As one would hope to see, the Archive extract confirms that the watch was delivered to Italy.

If you were asked to name a military watch that was issued to British forces, had sword hands, a 60-minute bezel and fixed lug bars we’re guessing eight out of ten would name the Rolex MilSub. Omega, however, also supplied dive watches that met the UK MOD spec for a military diver’s watch. Between 1967 and 1970 Omega delivered a number of SM300 watches that all featured the aforementioned attributes as well as the iconic ‘circled T’ on the dial. Lot 123 is a very nice example of one such watch that was delivered to the Army, as signified by the ‘W10’ engraving on the case back. This marks it out as additionally rare, as most were delivered to the Navy with a ‘0552’ code on the case back. The watch’s provenance and delivery details are highlighted on the accompanying archive extract.

If we continue with the name that watch game and asked ‘which watch brand was used extensively by Comex’, probably nine out of ten would say ‘Rolex’. However, Omega also tested and developed some watches with Comex that we now know as the Proplof. Regarded as one of the leading commercial diving companies, founded in the 1960s and still going strong today, Compagnie Maritime d’Expertises (Comex) have always been at the forefront of setting new diving records. A small number of Proplof prototypes were used on the Comex Janus I dive in 1968 when 4 divers worked at a depth of 150 metres for 14 hours. These protoypes have a couple of key points to note, the red locking nut and blue dial without the PROFESSIONAL text or a depth rating. The archive confirms the watches prototype status and delivery to Comex.

An oddball watch, but worthy of mention is a De Ville series watch that was designed as part of a collaboration with jewellery and watch designer Andrew Grima. The 40mm x 25mm watch is made in sterling sliver and is fitted with an integrated sterling silver bangle-style bracelet. The blue sunray dial is stunning the watch houses a manual wind movement. Even in today’s context, where we feel like we’ve seen everything, this is a highly unusual watch and perfect for a bidder who wants to swim against the flow!

Available in the Shop: Our Selection of Top TAG Heuer Formula 1 Watches With Watchfinder & Co