Having claimed the lofty title of watch-of-choice among astronauts, it seems fair to forgive those who forget the origins of the iconic Omega Speedmaster. In fact, a clue can be found in the name! This king among chronographs saw it’s early marketing place it as the ultimate watch for sport and racing enthusiasts. The Speedmaster provided the perfect timepiece for the adrenaline soaked velocity seekers – those who valued precision, and quality, when each split second counted!  While everyone from NASA’s finest to Elvis sported an Omega, they never lost sight of the Speedmaster’s origins. The romance between Omega and race car drivers was rekindled with Formula One in the early nineties, and culminated in the coveted Omega Speedmaster Michael Schumacher line. Bringing the opportunity for unusual and unique colored dials, a swift ride-along with this segment of the Speedmaster’s history is something worth dipping into. Horology enthusiasts, buckle up! 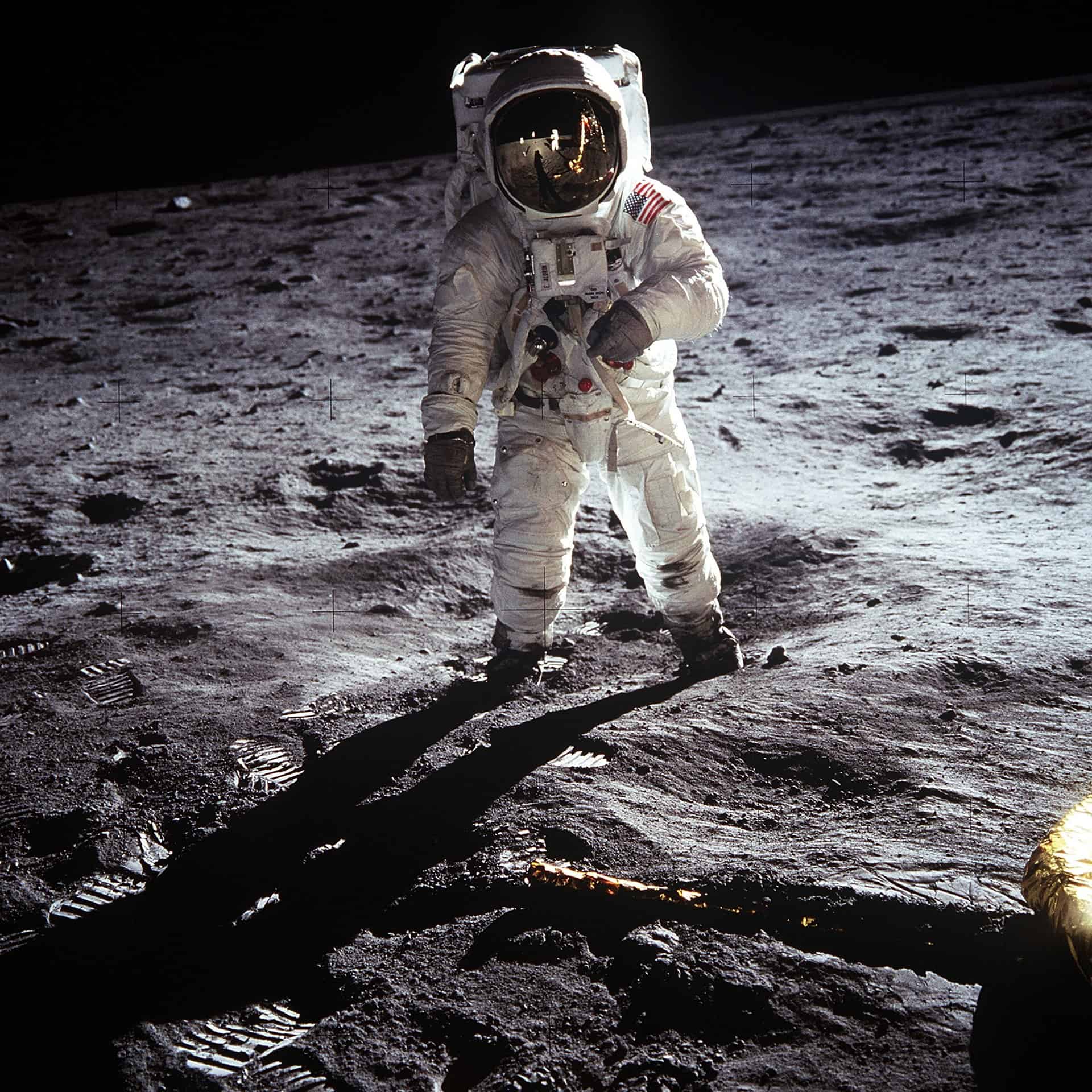 Formula One And The Japanese Passion For Speedmasters

Another impassioned and long-standing relationship can be found between the Speedmaster and Japan. So amorous was this connection that Omega have created several limited edition Speedmasters over the years, exclusively for the Japanese market. While the vast majority of Speedmaster models have featured a monochromatic palette, this niche market lured a highly coveted selection of now-rare unique color dials. In the early 1990s, their first limited edition Formula One themed Speedmaster landed in Japan. The Japanese Grand Prix was, and remains, one of the final destinations of the Formula One season each year, making it a highly exciting venue. This provided an ideal cultural crossroads in which to launch the special edition Omega Speedmaster Watch 3511.12. While the first Omega Speedmaster Michael Schumacher watch was still a twinkle in the eye of it’s creators, this model is believed to have marked the inception of the exclusive advertising contract between F1 World Champion Michael Schumacher and Omega! 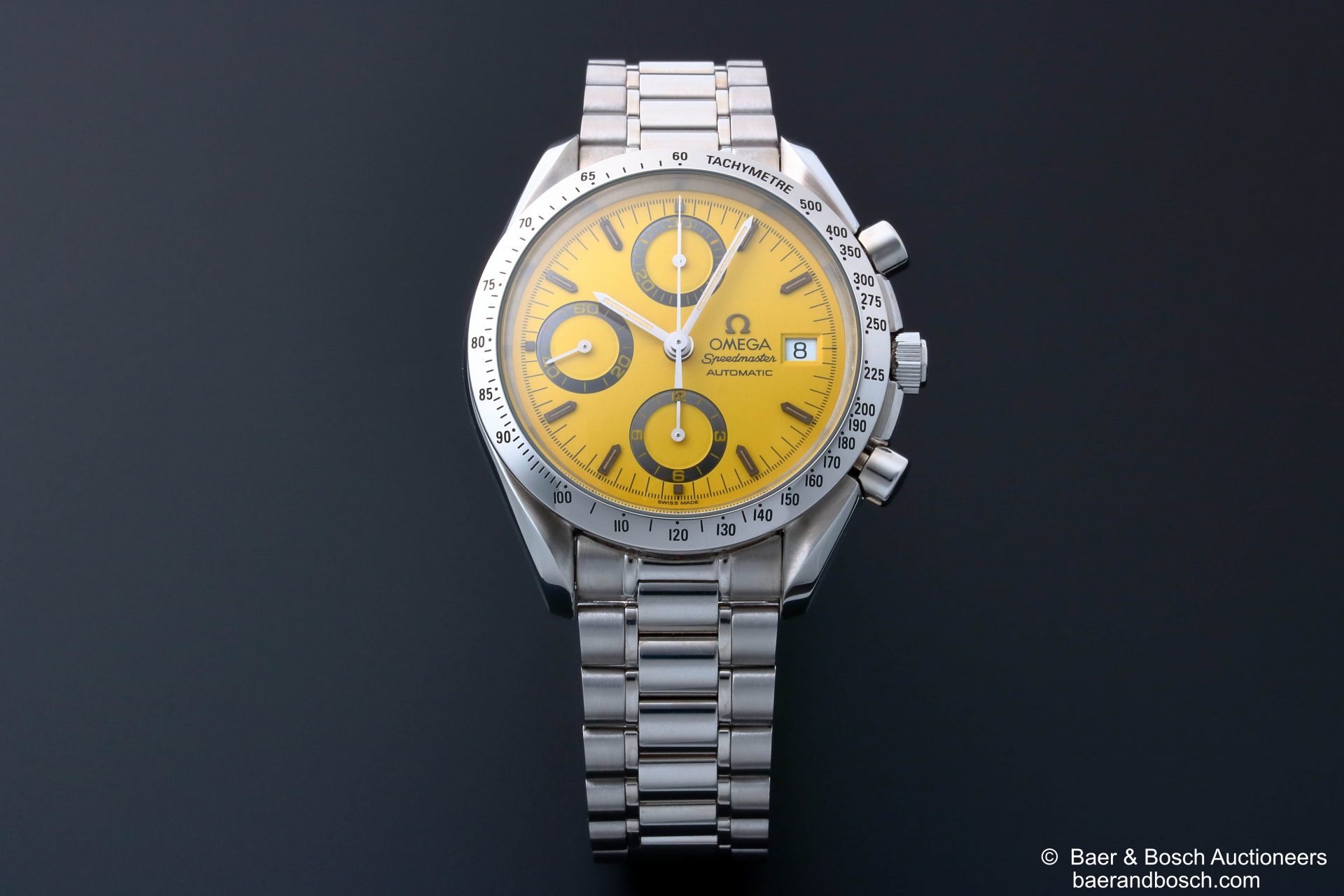 The Omega 3511.12 has a rich yellow dial with dark grey register rings.

This fine men’s chronographic wristwatch provides an energetic aesthetic for any adventurous watch enthusiast. The dial is an exuberant shade of yellow, with black accents. It features three two-tone sunken sub-dials, and date window at the 3 o’clock. The sub-dials layout on the dial delivers a 30 minute counter at the 12 o’clock, 12 hour counter at the 6 o’clock, 60 seconds counter at the 9 o’clock. This timepiece boasts a Swiss made, self winding automatic movement, of caliber 1152, and water resistance to 50m. It features a stainless steel engraved Tachymetre bezel and sapphire crystal. The case is back stamped with the Omega Hippocampus seahorse logo. The 3511.12 provides a diameter of 39mm, and comes on a stainless steel Omega bracelet with an Omega deployant buckle bracelet stamped #1469 with matching #813 end pieces. While it is difficult to date this early and rare model precisely, it is thought to be circa 1991-96. 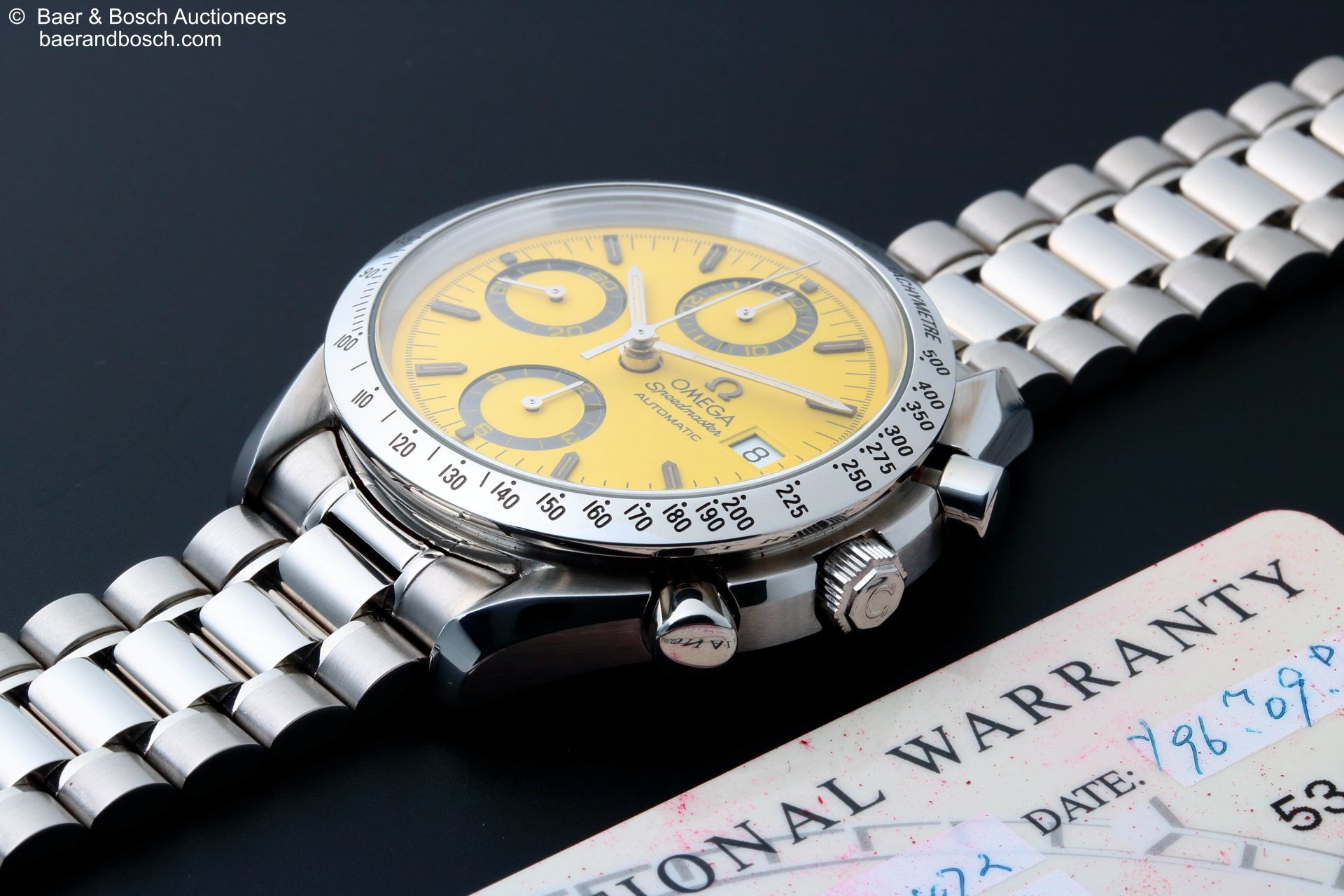 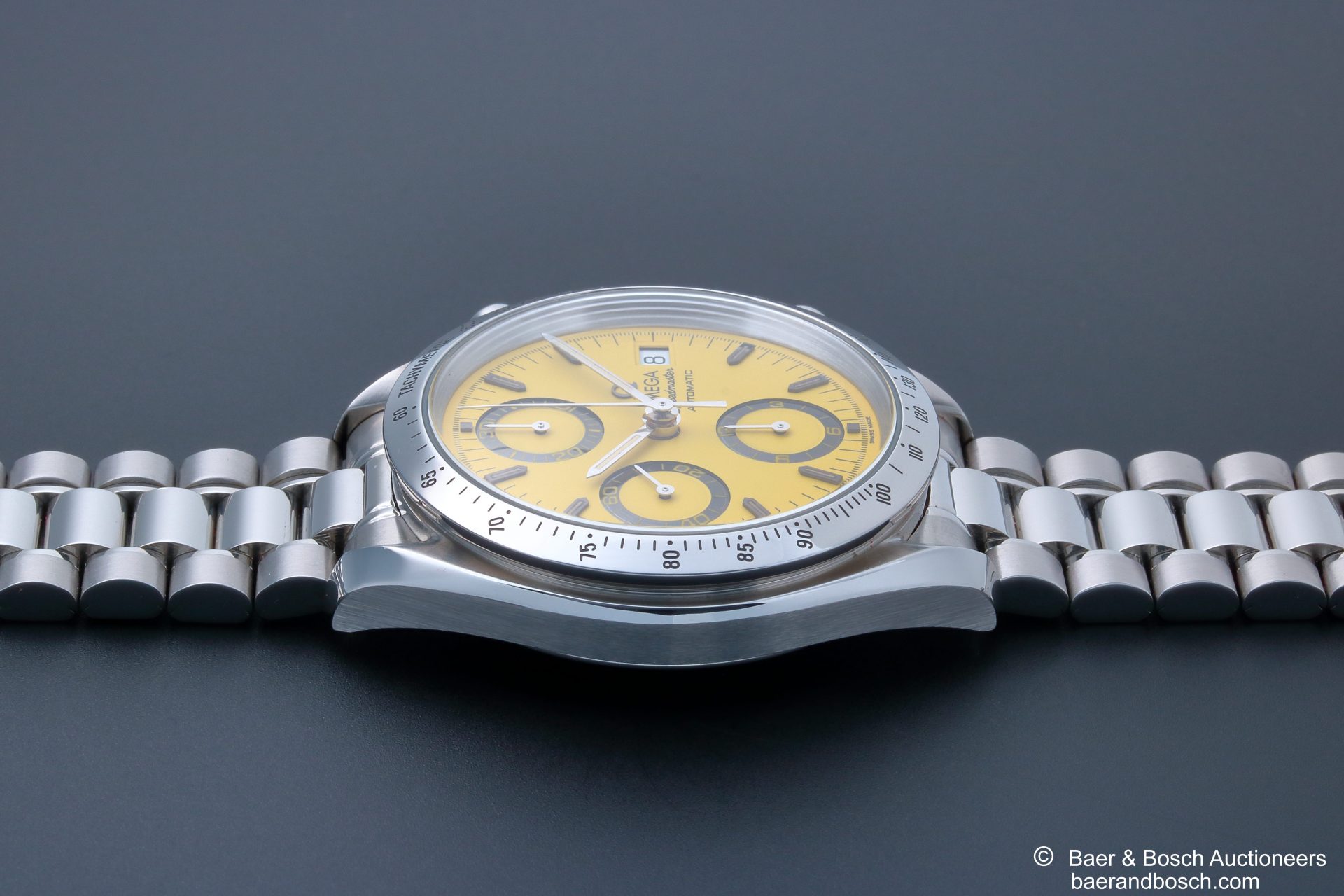 Michael Schumacher: An Iconic Watch For A Legendary Driver

It’s hardly surprising that Omega sought Michael Schumacher as the perfect face for the Speedmaster brand. Schumacher seemed unstoppable in his heyday, and retired with a track record that is unlikely to ever be eclipsed. Claiming the title of most successful F1 driver in the history of the sport, Schumacher won no less that seven world championship titles. During his full run as world champion, he also served as an Omega ambassador. Each of these extraordinary years was marked with a new Omega Speedmaster Michael Schumacher, often with highly unusual and limited releases – some featuring unique colored dials such as those featured here. For fans of both Speedmaster heritage and Schumacher’s remarkable legacy, there can be no better tribute than seeking out such highly collectible Omega Speedmaster Michael Schumacher wristwatches.

Following the Omega Speedmaster Date 3511.12, the race-themed yellow returned with the arrival of the Omega Speedmaster Michael Schumacher 3510.12. Introduced on July 22, 1996 in collaboration with Michael Schumacher, it was shown at Schumacher’s go-kart track in Kerpen, Germany. The seminal Omega Speedmaster Michael Schumacher 3510.12.00 featured that stunning yellow dial, with black and red accents, and a racing style minute track. The layout of the sub-dials provides a 60 seconds counter at the 3 o’clock, 12 hour counter at the 6 o’clock, and 30 minute counter at the 9 o’clock. This wristwatch features a self winding automatic movement, of caliber 1141 or Caliber 1143 (based on the ETA 2892-A2), alongside hesalite crystal, a black Tachymetre bezel, and 50m water resistance. The case is back stamped with the Omega Hippocampus seahorse logo. The stainless steel Omega bracelet with an Omega deployant buckle bracelet is stamped #1469 with matching #811 end pieces. 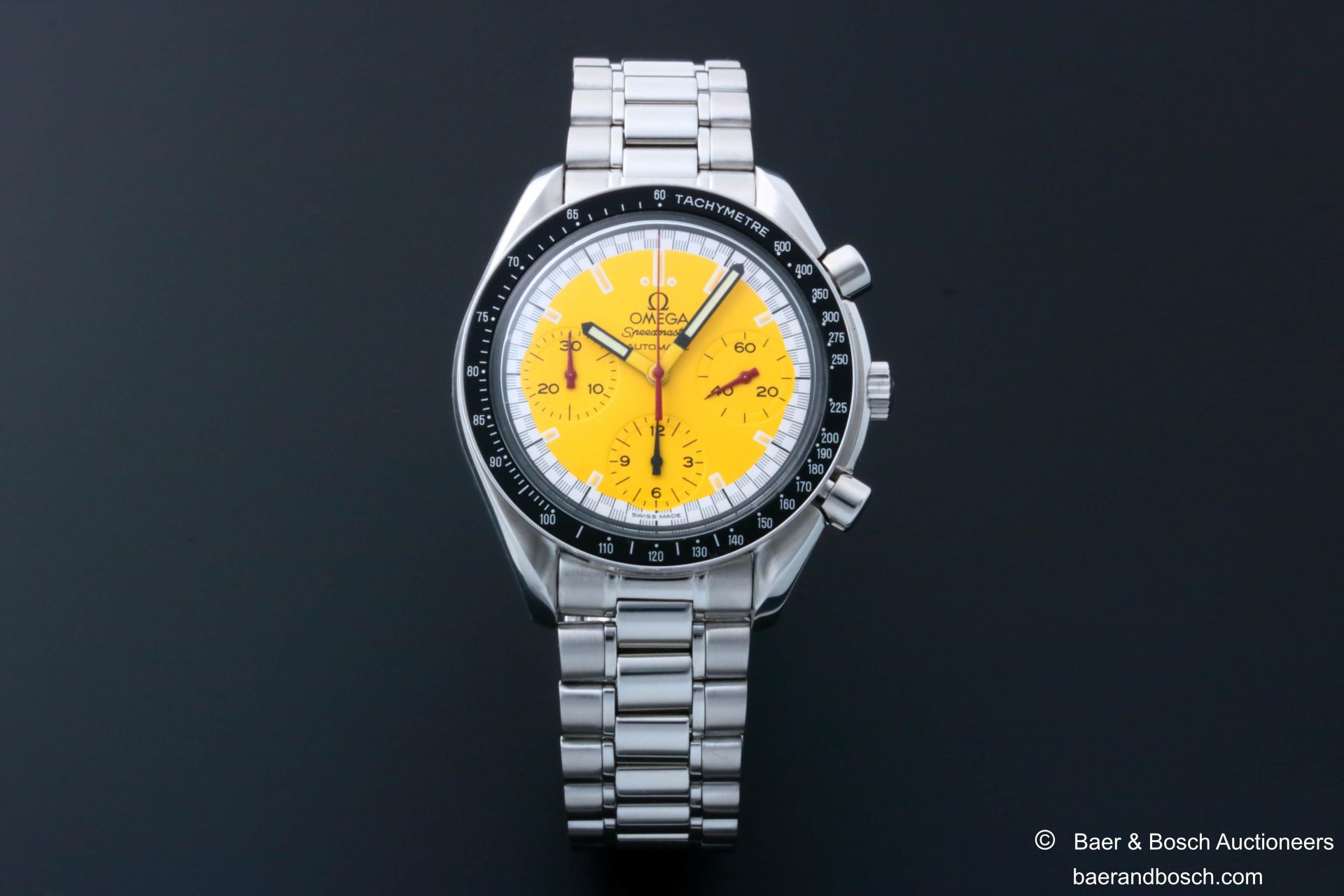 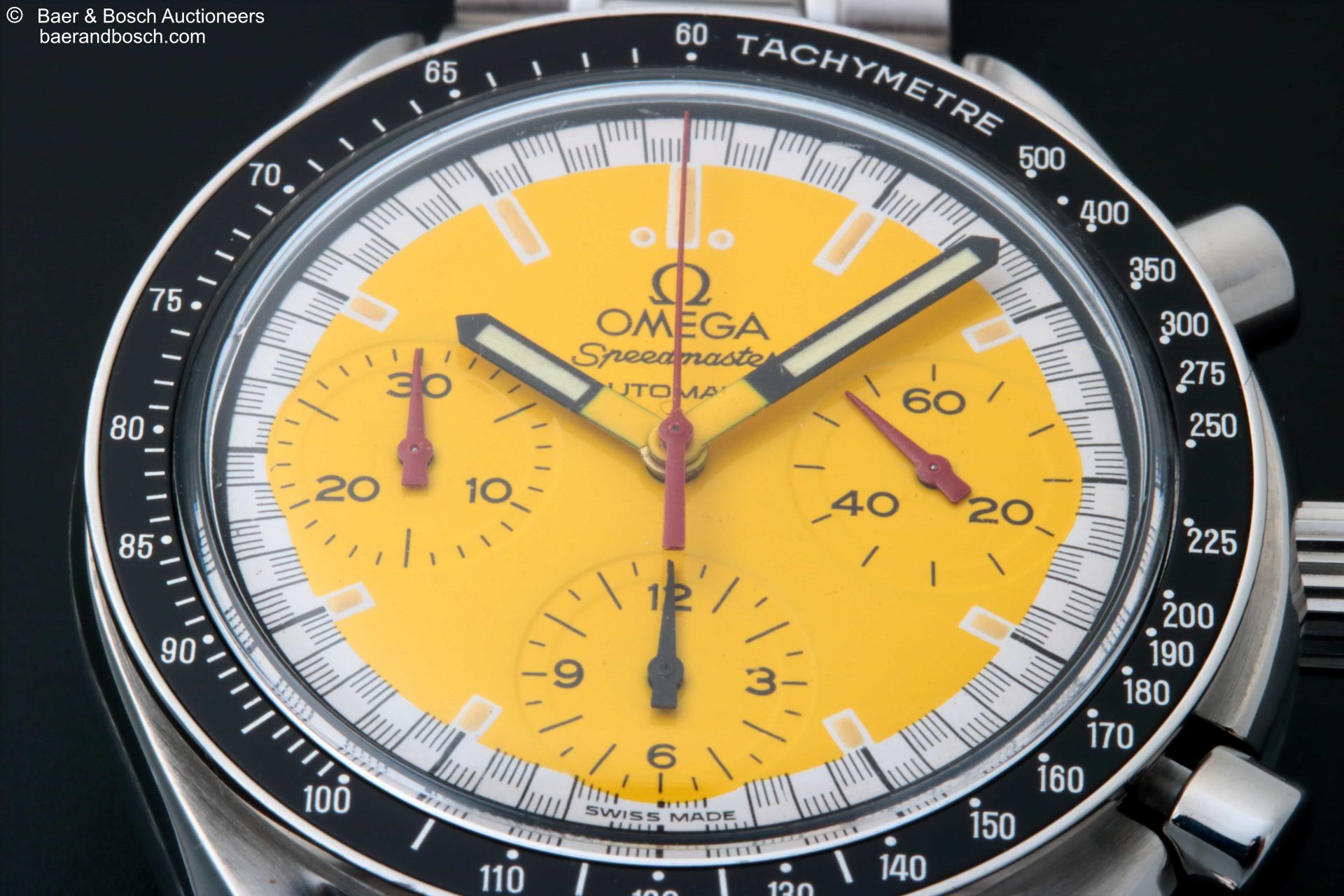 Racing yellow dial with a “checkered” minute track. Note the original Hesalite crystal indicated by the Omega symbol in the center. 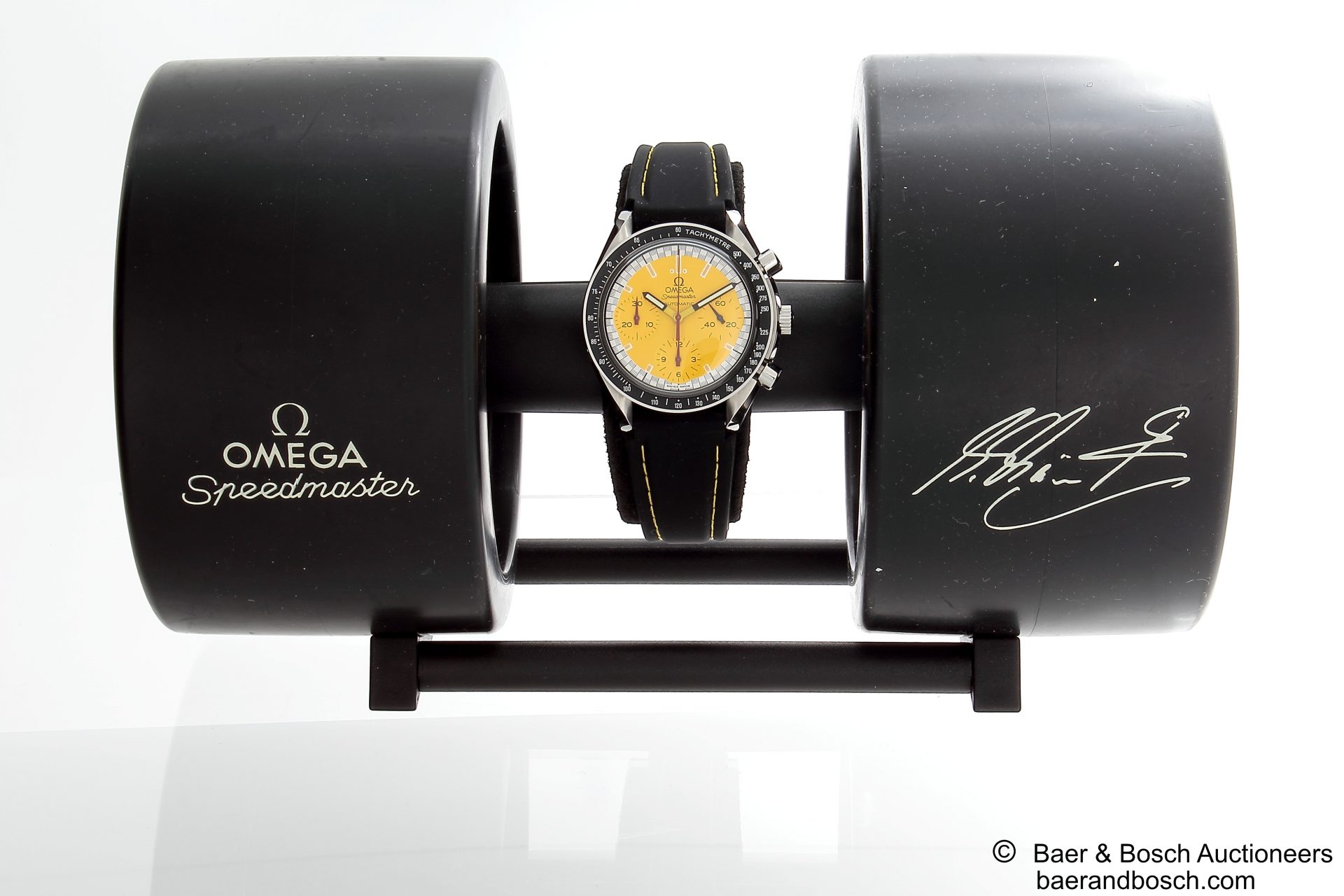 This Omega Schumacher collection came with a watch box in the shape of a Formula One tire.

While non might be so enchanting as the energetic yellow – of the stainless steel braceleted 3511.12 wristwatches, Omega also introduced a red version #3510.61.00 and a blue version #3510.81.00. The blue version included a distinct “Cart” edition, featuring the Cart logo on the dial.  It was introduced in 1997 by Omega to announce their new ambassador, race driver Michael Andretti.  Andretti drove for the Newman / Haas racing team.  To commemorate their new relationship, Omega launched the Speedmaster Cart edition.  Of the color-matched leather strap variants, Omega introduced a red version, #3810.61.41, and a blue version, #3810.81.08. To round out the collection, the #3810.12.06 flaunted a yellow dial on a black leather strap. Does the thought of one of these unusual and collectible racing-themed Speedmaster’s set your pulse soaring? While Elvis’s Seamaster sold at auction for a staggering $1.8 million, these iconic and highly collectible speed-themed Omegas, with their unique colored dials, are far more accessible for today’s collectors. Not only that, but they have a fantastic story to tell. 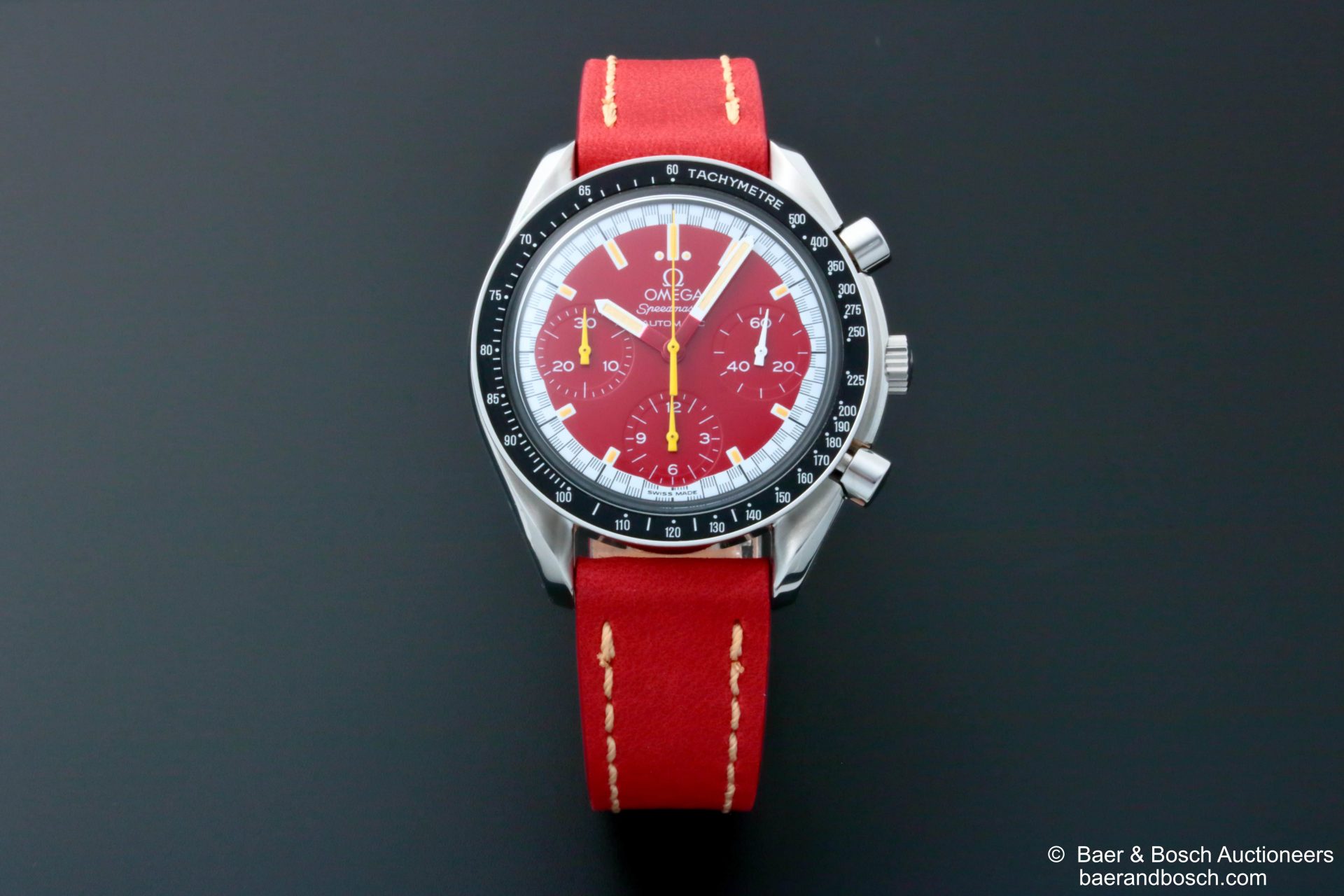 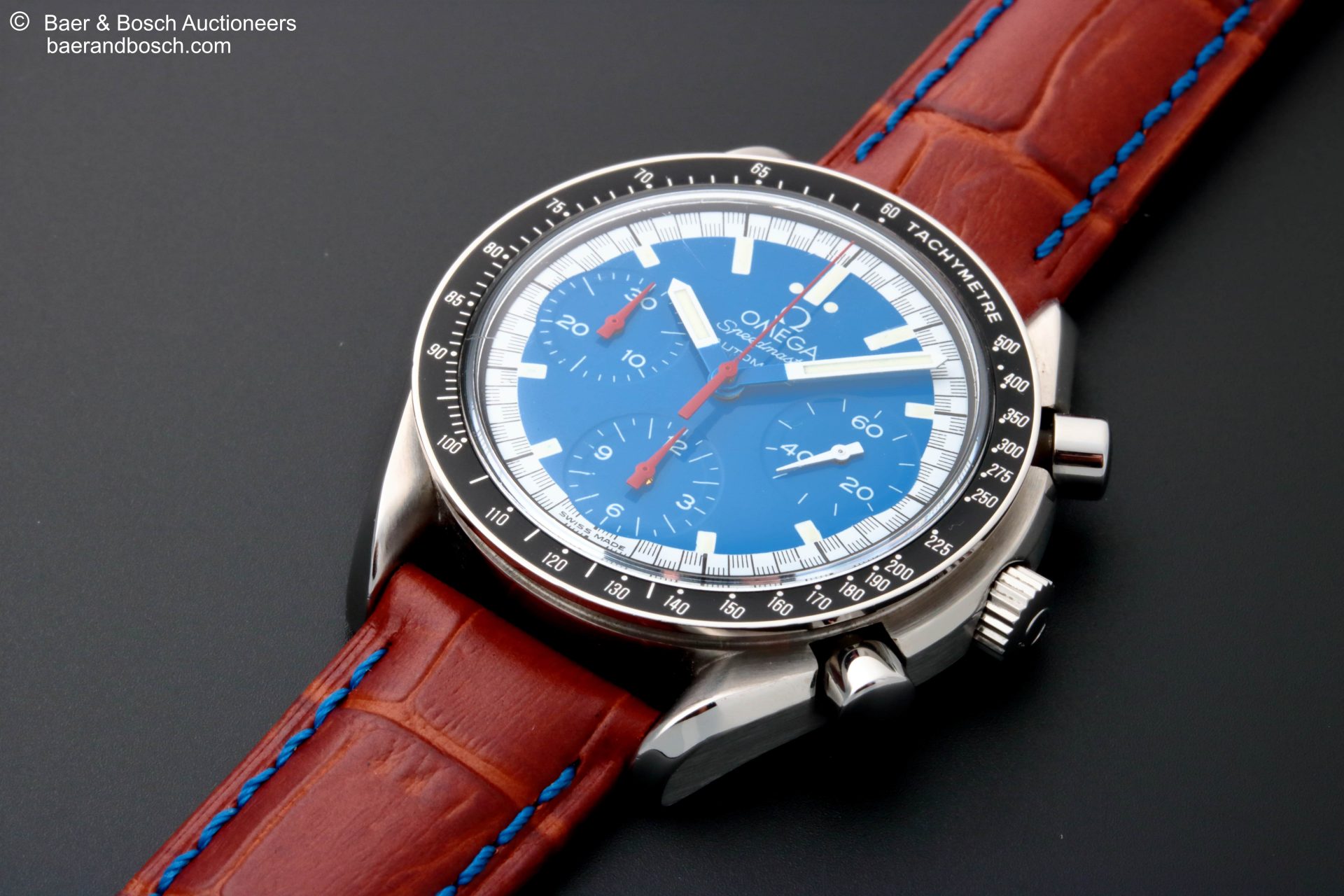 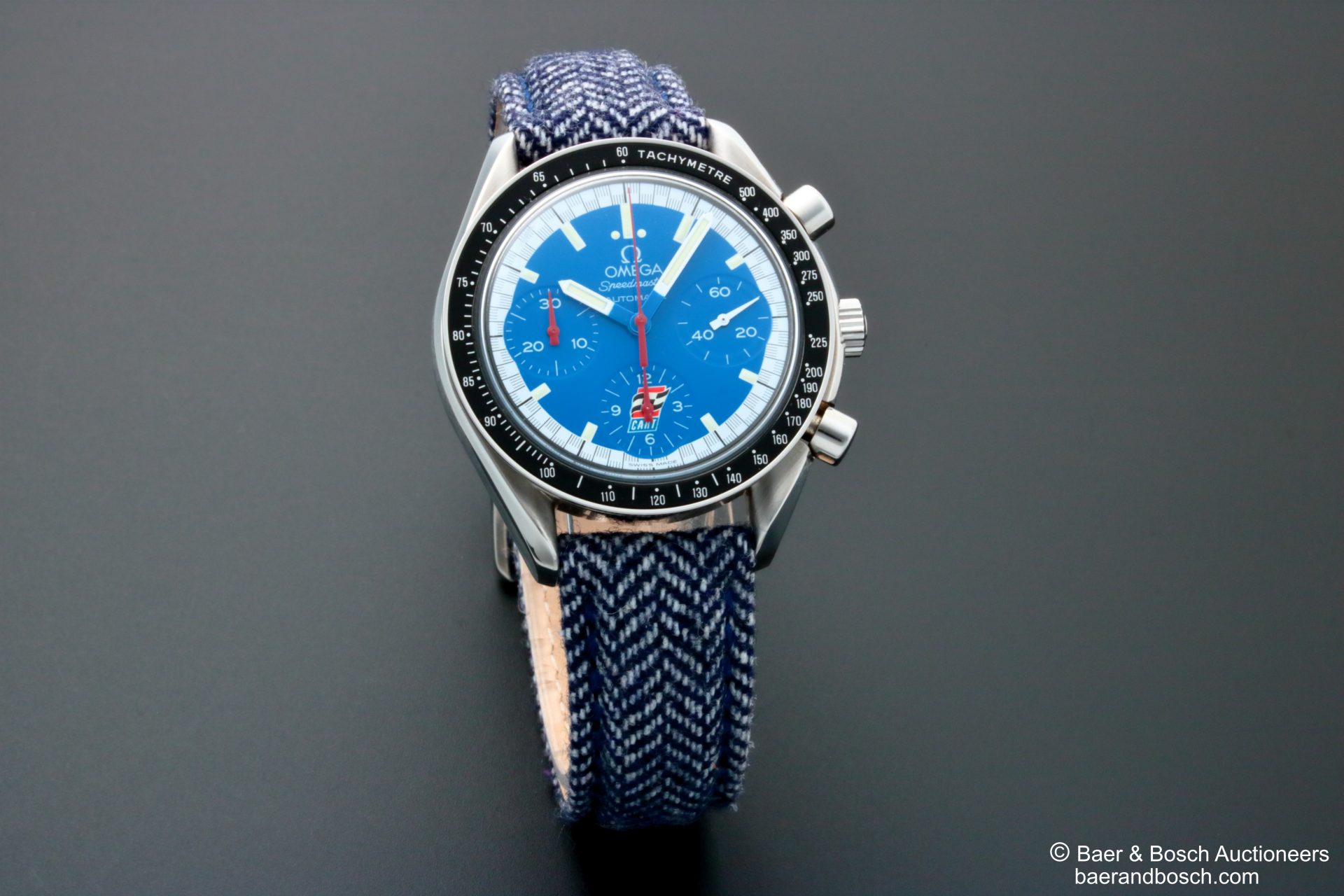 a dinner at a yacht club

3 Annual Calendars From Patek Philippe, Parmigiani Fleurier, And Omega That Will Only Need One Adjustment In 2023

A Very Special Cartier Basculante 2390 For The Australian Federation