Delve Into The World Of Omega’s Rare Dials, With Limited Edition Speedmasters Created For The Japanese Market

Undoubted royalty in the world of luxury watchmaking, Omega is a brand that is as iconic as it is ingrained in global culture. From James Bond to Elvis Presley, the Omega is a watch we have seen on the wrists of war heroes and cult-status superstars for more than a century. It’s no wonder that these timepieces become prized collectibles – especially when limited edition pieces with rare dials become available. For this reason, Baer and Bosch are exhilarated to share the arrival of two highly sought after limited edition Speedmaster watches, created exclusively for the Japanese market. Here, we will explore why the Omega Speedmaster 3513.60, and the Omega Speedmaster 3511.60 are likely to steal your heart, and what makes each timepiece spectacularly unique. 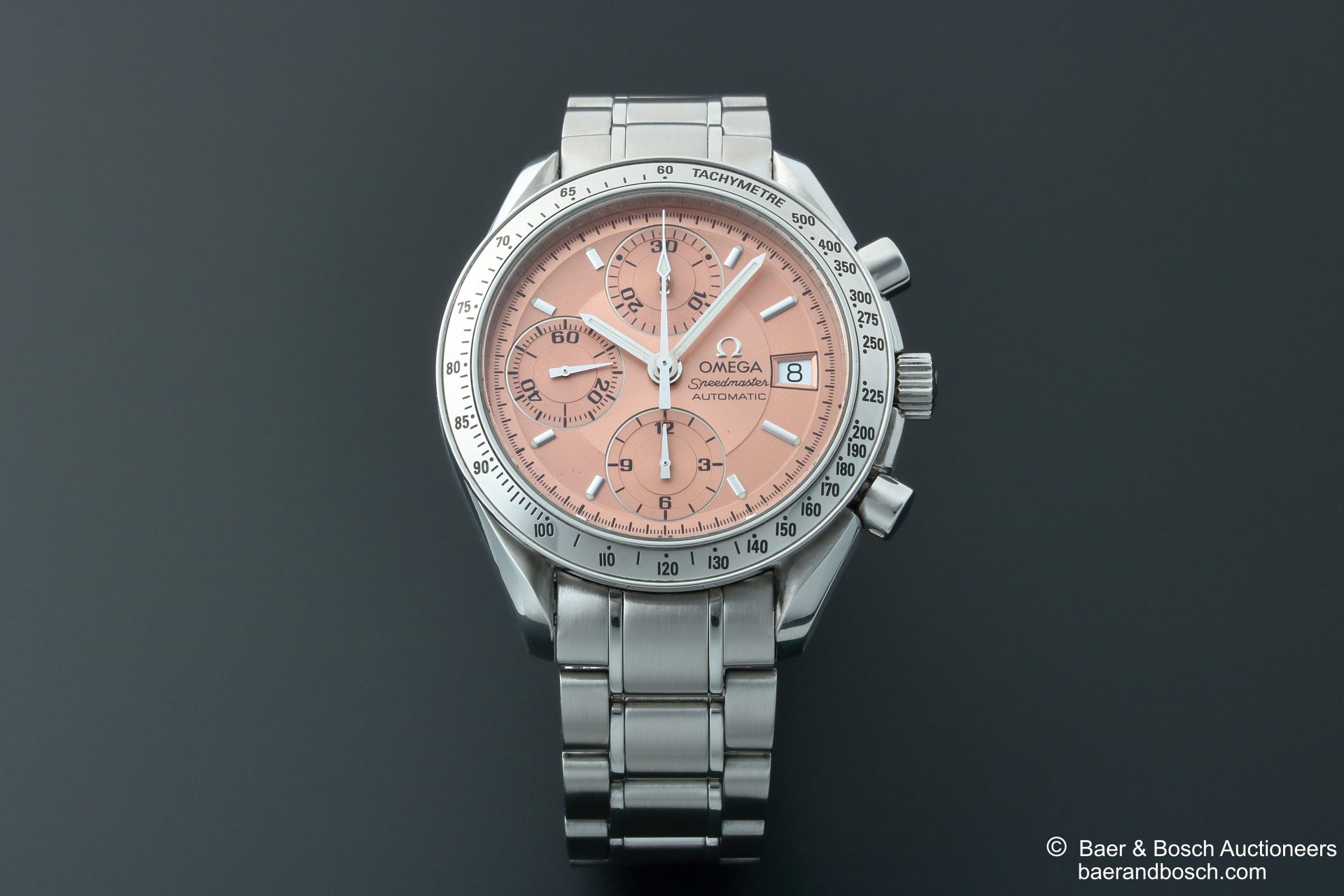 Diving Into The History Of A Truly Iconic Brand

First founded by Louis Brandt in La Chaux-de-Fonds, Switzerland, in 1848, and then incorporated with the Omega name in 1903, the brand’s history is as captivating as it has been world-dominating. Such was their reputation for precision time keeping, that Omega became the first watch company to time the Olympic Games, beginning in 1932. In their next meteoric claim to fame, Omega watches became the official timekeeping accessory of the British Royal Flying Corps in 1917, and then the US Army in 1918.

Shining a light on the Speedmaster in particular, we can unearth a little of the history of the chronograph wrist watch. First developed for precision battle artillery, the chronograph was favored by pilots, submariners and race car drivers for their revolutionary precision. The Omega Speedmaster claimed it’s place in the history books when selected as the watch of choice for NASA Astronauts. A Speedmaster joined Ed White when he made the first spacewalk in 1965, and then – most iconically, became the first watch on the moon on the wrist of Buzz Aldrin during the 1969 moon landing, worn over his spacesuit, in a testament to extraordinary Omega craftsmanship! 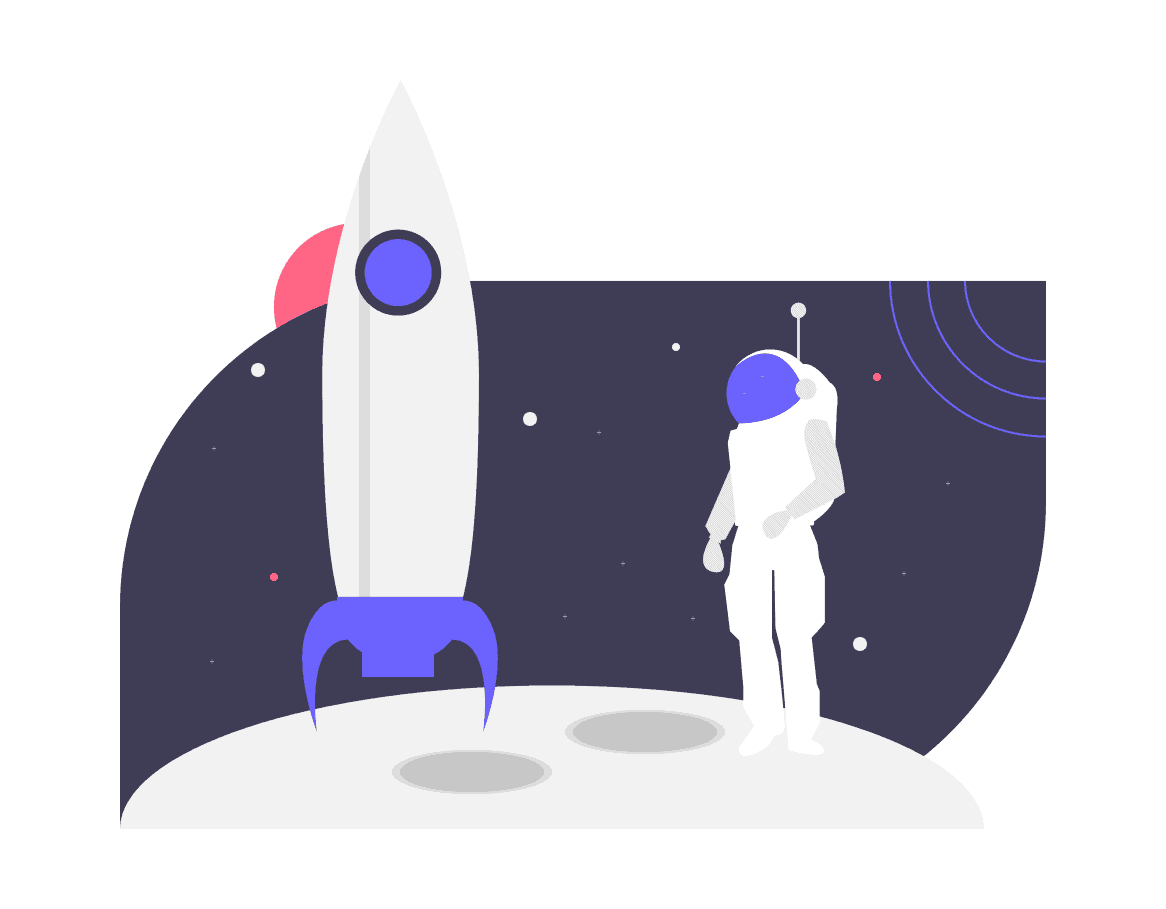 So enamored are the Japanese with the Omega Speedmaster, that the classic watch is laced into the country’s pop culture. A particularly charming example of this can be found in the cult-status 1970s Japanese science-fiction TV series “The Return of Ultraman”. Producer Eiji Tsubaraya was an Omega aficionado, and several characters within the series can be seen with Omega Speedmasters on their wrists. Such was the fervor for the Speedmaster within the Japanese market, that Omega chose to create several extraordinary, limited edition watches for exclusive retail in Japan, with highly coveted rare dials. 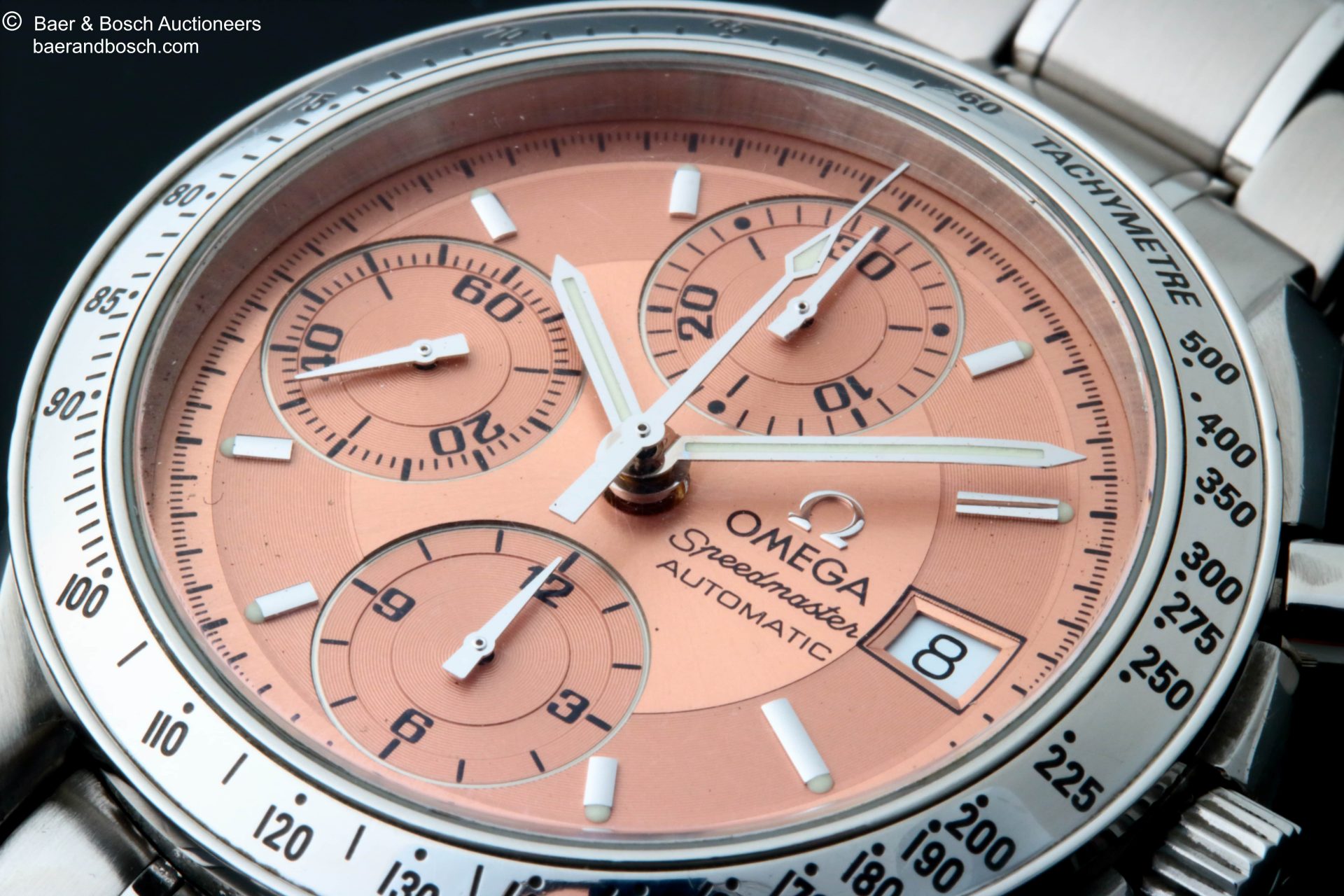 As a general rule, with few exceptions, Omega made watches with black and silver dials only. However, for the Japanese market, they periodically produced unnumbered limited editions with special colored dials. Both the Omega Speedmaster 3513.60, and the Omega Speedmaster 3511.60 are just such rare finds, with rare dials featuring distinctive design and unusual salmon coloring. Each was originally retailed in Seibu Department Stores in Japan. The exclusive and rarified nature of these watches draws the attention of international watch collectors of the highest caliber.

Getting To Know The Omega Speedmaster 3511.60

This spectacular example of a collectible limited edition Speedmaster, exclusive to the Japanese market, was first released in 1997 to commemorate the 40th anniversary of the Omega Speedmaster, which was first introduced in 1957. This beautiful example of Omega’s rare dials boasts a salmon color, with two-tone sunken sub-dials. Of these, a 30 minute counter features at the 12 o’clock, a 12 hour counter at the 6 o’clock, and a 60 second counter at the 9 o’clock. Finally, the spectacular dial design is completed with a date window at the 3 o’clock. 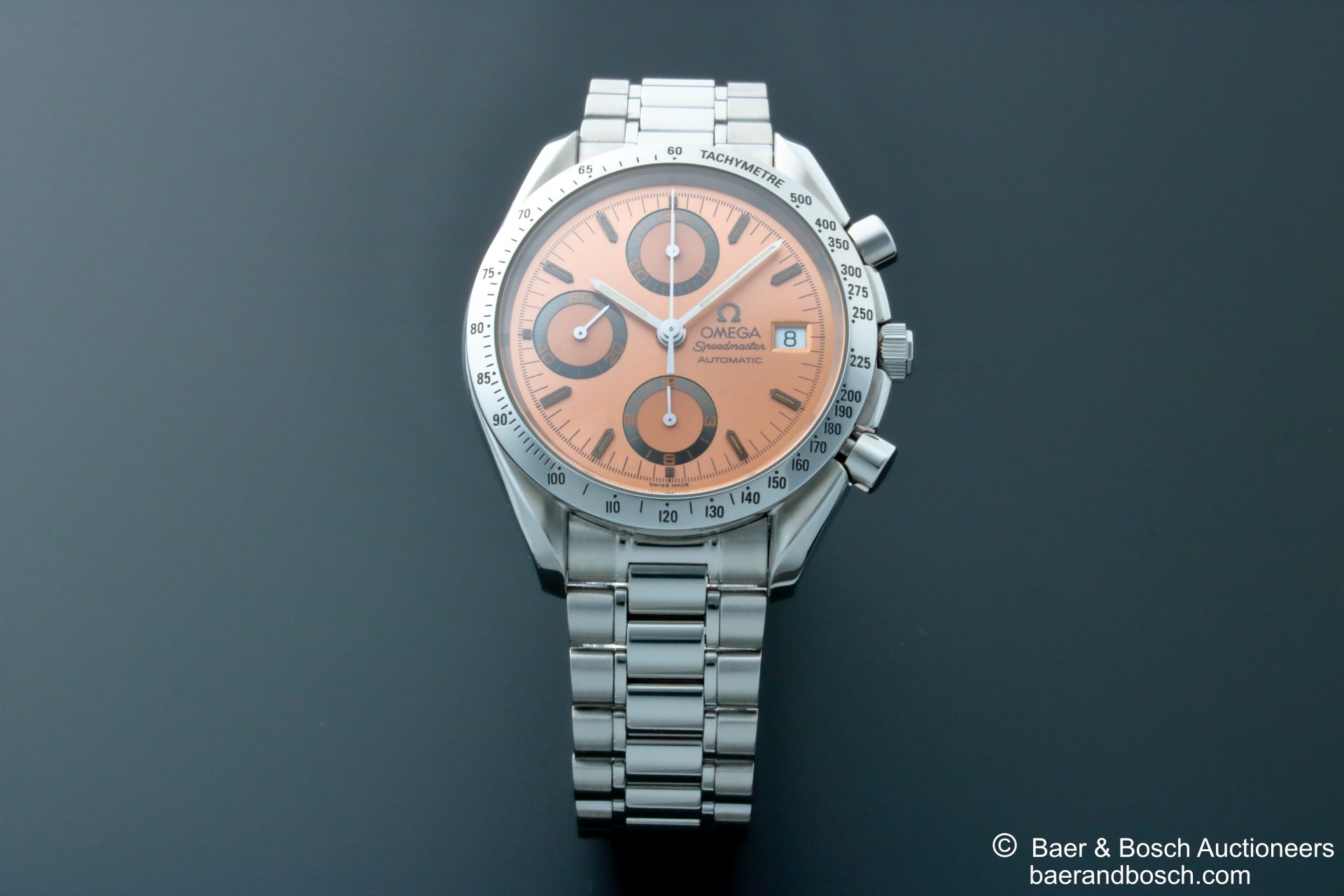 The Speedmaster 3511.60 features 50m water resistance, a 39mm diameter, and a #1469 / #813 stamped bracelet. The watch’s automatic movement is caliber 1152. This movement is based on the ETA Valjoux 7750, which is one of the most reliable chronograph movements – used by several other brands, such as Chopard, Eterna, Baume & Mercier, and Laco. The case back features the iconic Hippocampus center, featuring Omega’s handsome seahorse design. The top is engraved “40th ANNIVERSARY”, while the bottom is engraved “GRAND PRIX”. Finally, the watch features a flat engraved bezel, and is presented within a black leather Omega box, secured by leather tongue and holding a large interior pillow. 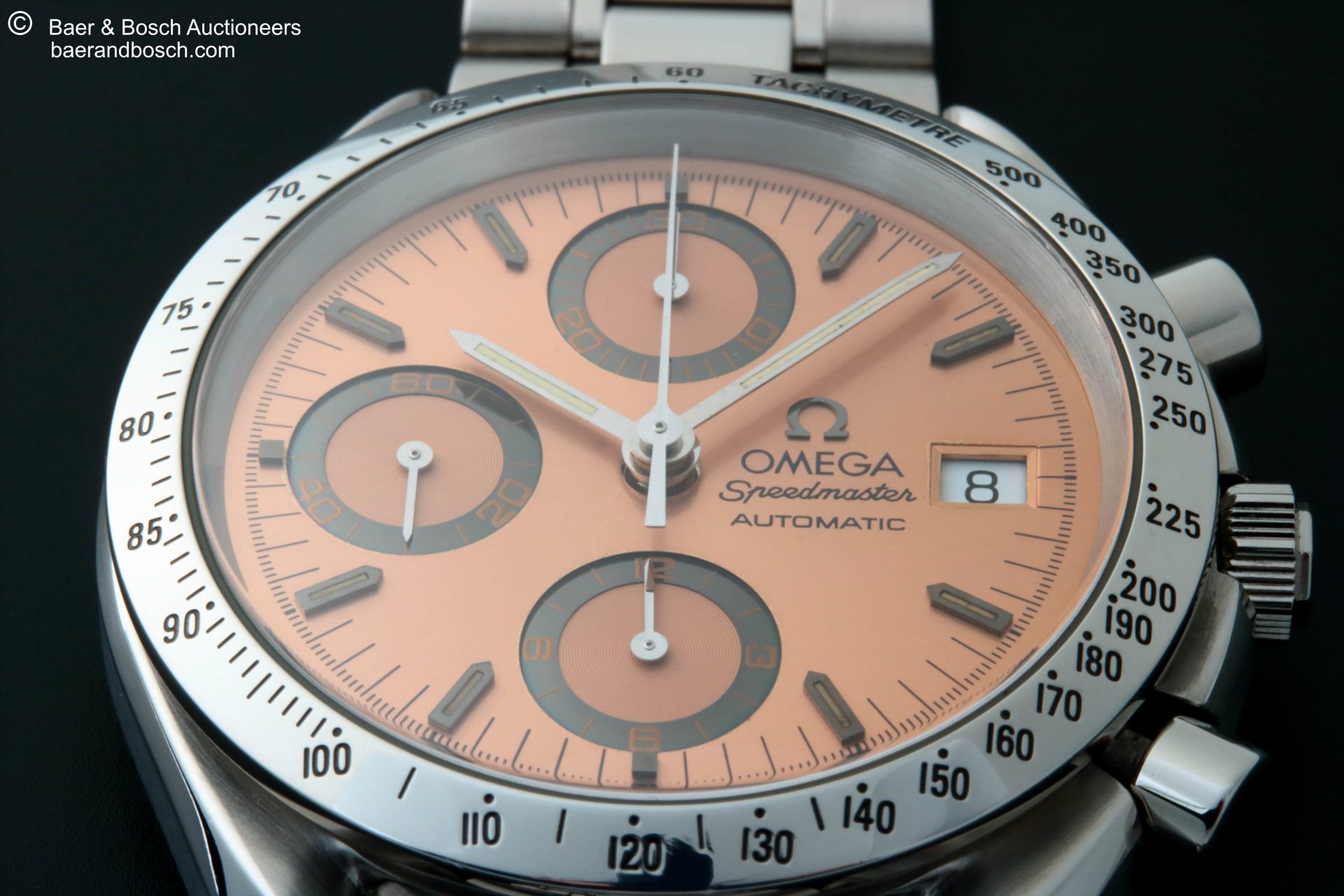 A closer look at the Omega 3511.60 unique dial coloration. 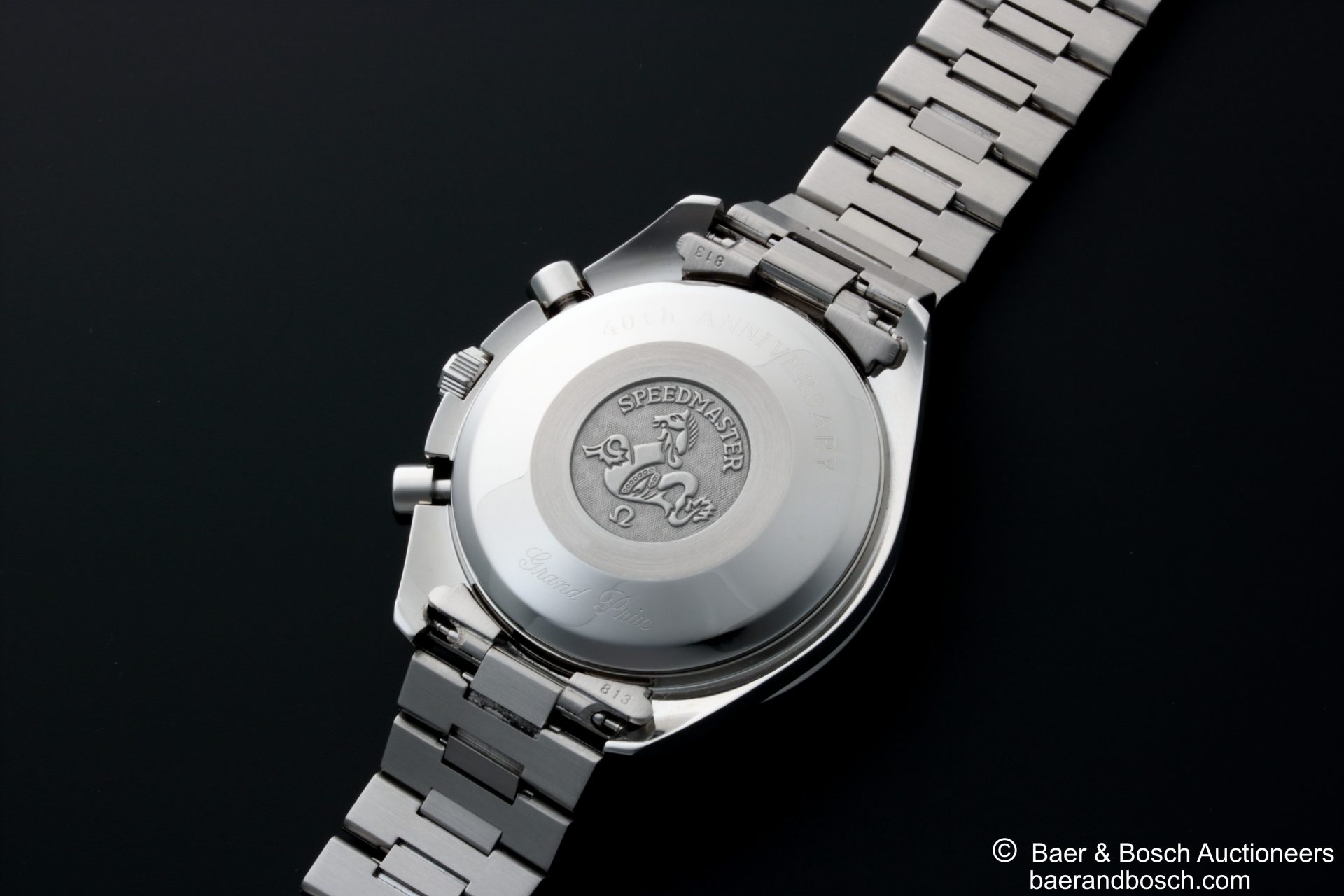 Becoming Acquainted With The Omega Speedmaster 3513.60

The Speedmaster 3513.60 exhibits a hugely attractive salmon step dial with sunken sub-dials. This gentlemans stainless steel Omega Speedmaster chronograph wristwatch enjoys the same sub-dial and date layout as the 3511.60, and a stainless steel engraved Tachymetre bezel. Just as it’s counterpart, this watch features a self winding automatic, Swiss made movement, and a 39mm diameter. Fascinatingly, the 39mm Speedmasters were first launched in 1957. In contrast to the prior 42mm Speedmasters, this slightly smaller face was first created exclusively for race car drivers. 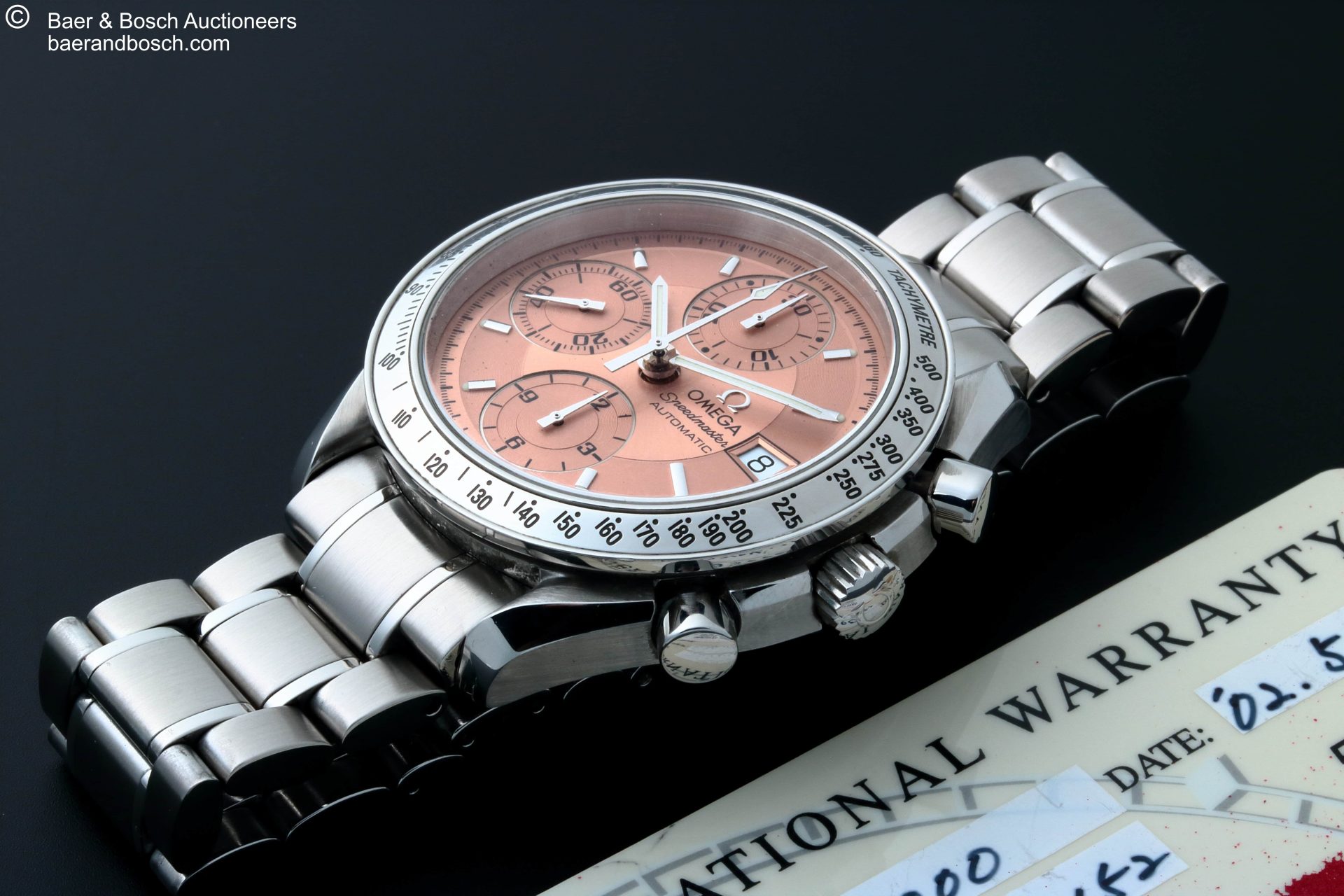 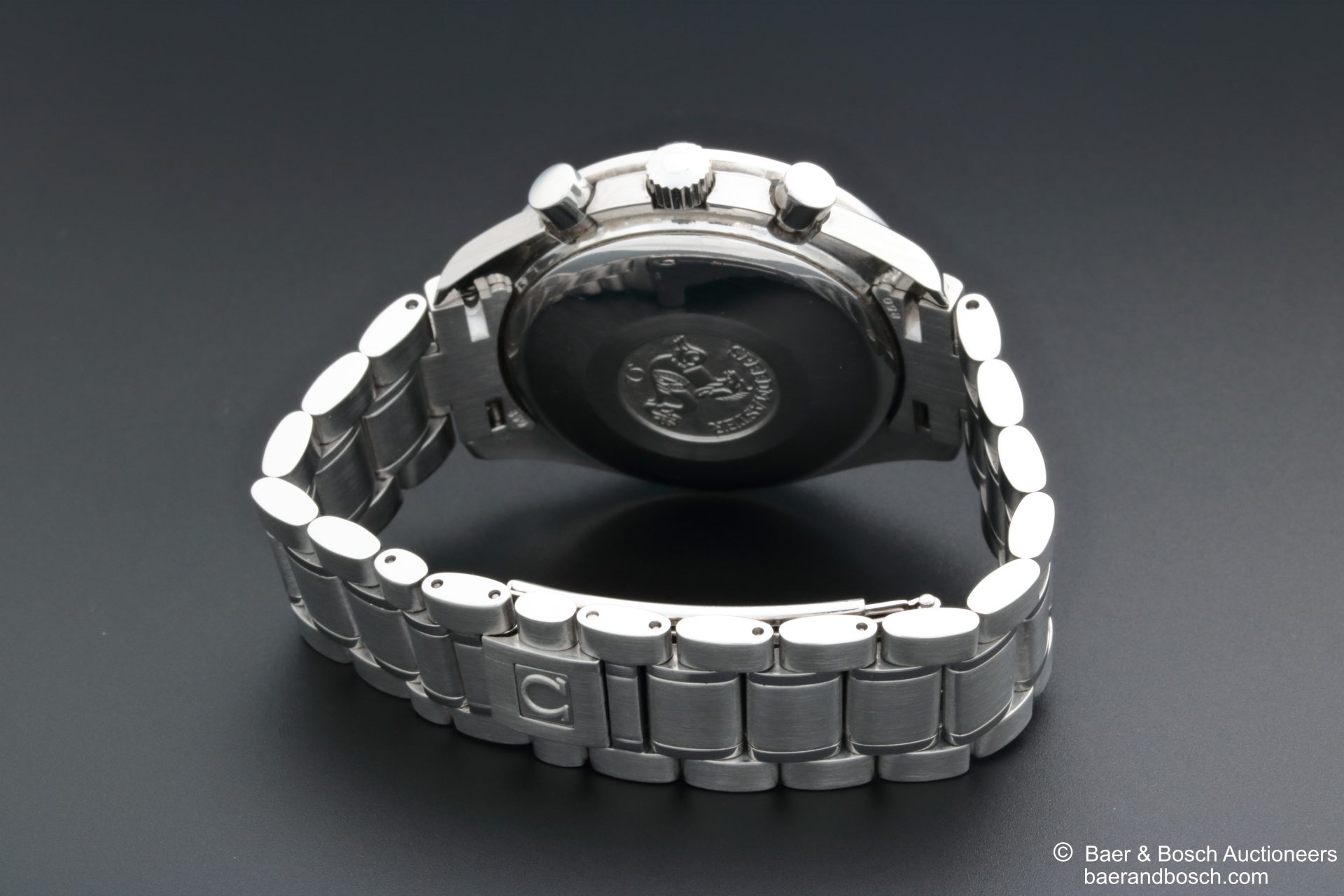 The Speedmaster 3513.60 is once again backstamped with the Hippocampus seahorse logo. The bracelet is stamped #1562 with matching #850 end pieces. As sold exclusively within the Seibu department store, the watch is presented within a red leather Omega box, featuring the Omega Watches medallion, and small interior pillow. The ultimate question that remains to be answered is which of these stunning examples of Omega’s limited edition timepieces can you not live without in your collection? 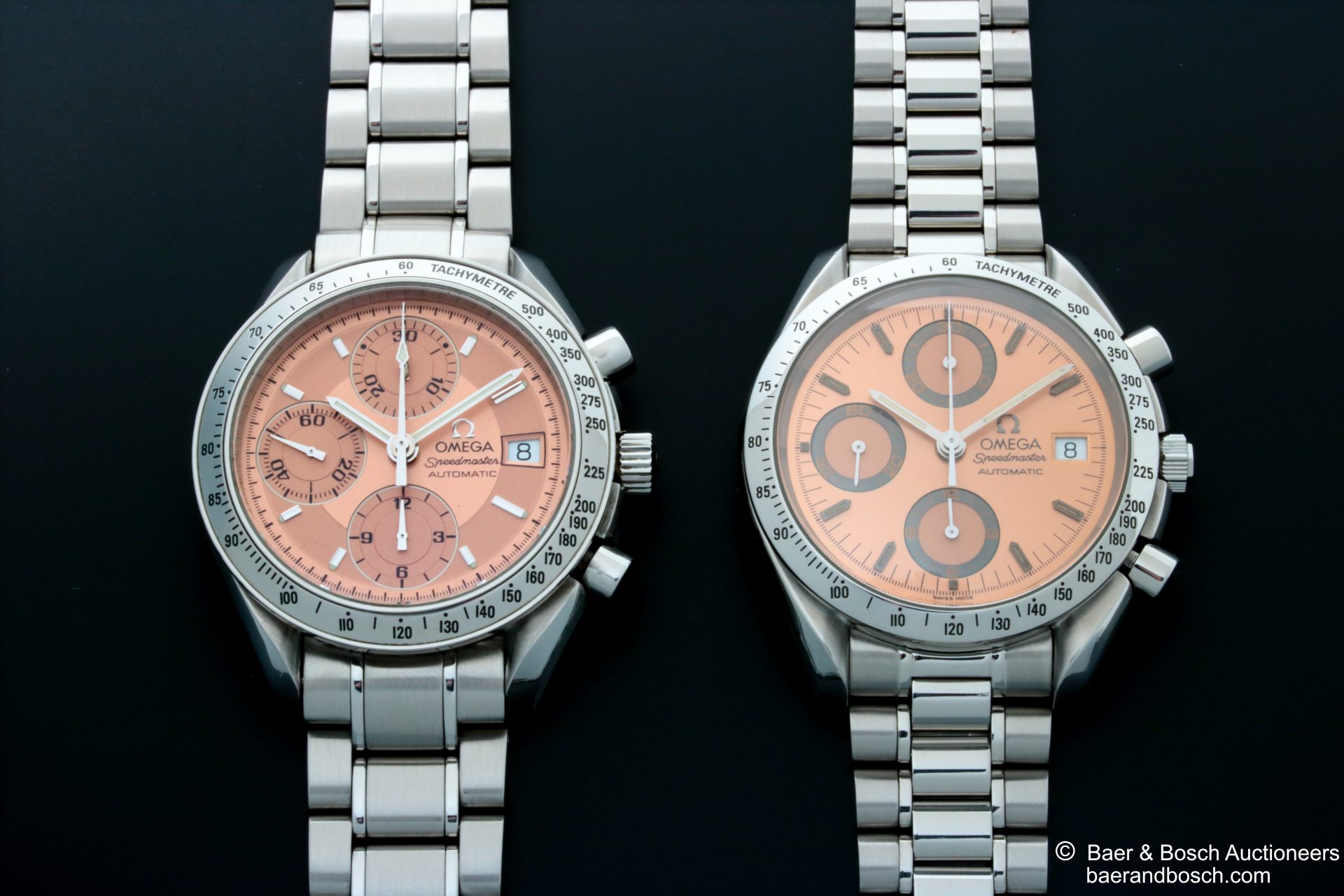