The Pièce de Résistance of the Double Balancier Concept 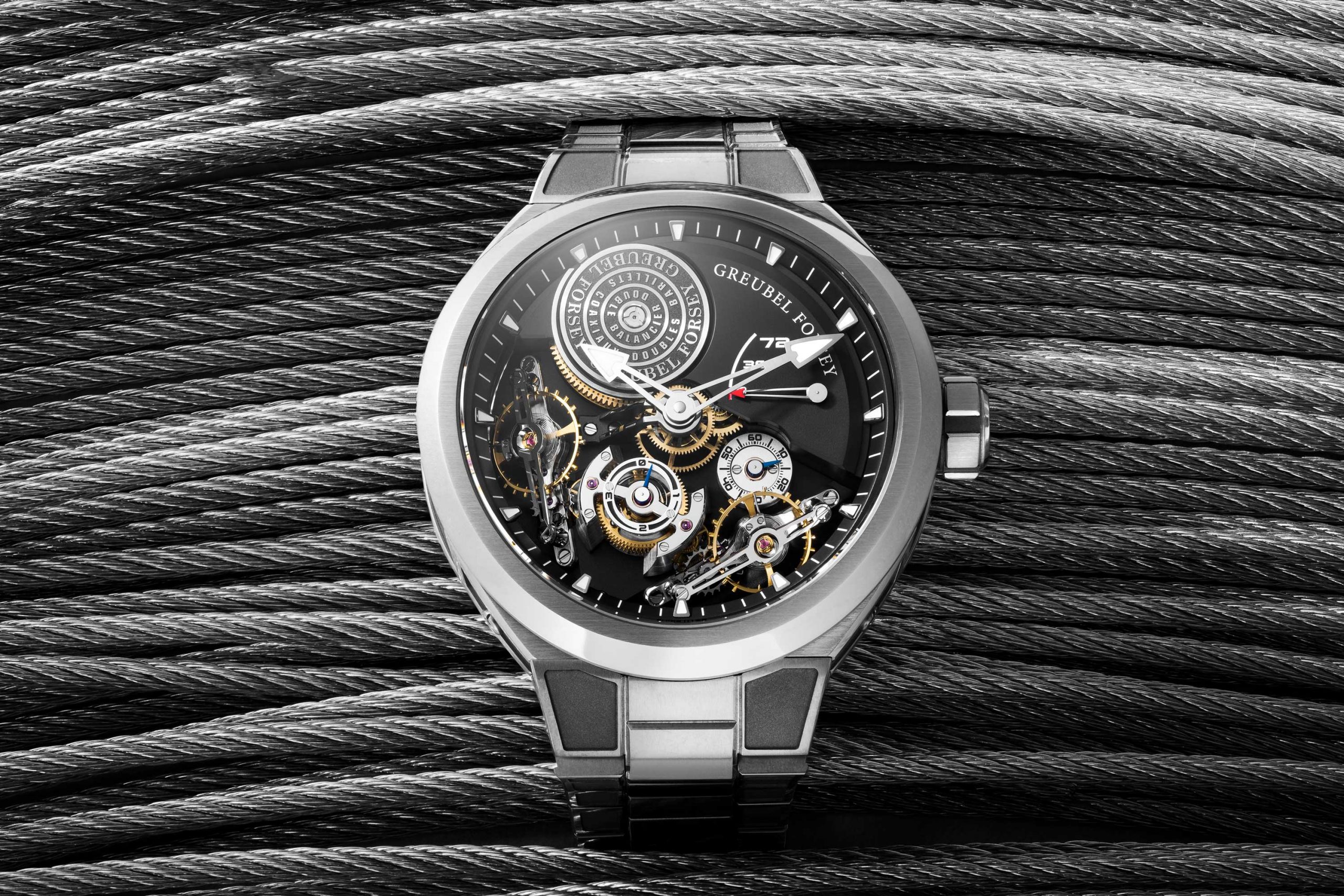 All that scientific engineering is made beautiful by the art of the movement’s finishing. Here we find the bridges with polished bevels, countersinks for the screws, and straight-grained flanks just for variety. The flat top sides of the differential and balance bridges are also flat black polished. Black frosted treatment of the dial and mainplate lets all that bright work not get lost in the view. With so much to see, the overall design has visual harmony in its high level of finish and color contrast despite the intentional asymmetry of the dial layout. Pablo Picasso said it best and it very much applies here: “Learn the rules like a pro, so you can break them like an artist.”

Robert Greubel and Stephen Forsey first made a name for themselves by reinterpreting how a tourbillon should be presented on a dial (i.e. at an angle). Over the years since 2004, they have continued to outdo themselves by adding more of a good thing (up to four tourbillons) to their watches, and then came the “flying” globes of their equally extreme GMT watches. GF watches were always packed to the brim with horological sculptural architecture, but rarely caught the attention of the mainstream enthusiast as they often seemed too heavy and unwearable. All that changed when Antonio Calce took over the reins from the founders in 2021 and realigned the brand’s focus of creating everyday wearable watches but keeping the architectural forms that made them famous. And it shows. The Double Balancier Convexe ticks every box of that brief, and then some.

Its appeal lies in the fact that it is a watch that goes about its simple function in a most complex and artful way. Yet, its complexity has a purpose in the pursuit of chronometry and does not get in the way of its usability. The titanium ovoid case, which is surprisingly water-resistant to 100m, compensates in weight savings what certainly would have been a lumbering beast of burden on the wrist, had it had been sculpted from precious metal. The endless curves feel natural against your skin, with titanium being hypoallergenic and impervious to rust for all intents and purposes. Whether you choose the rubber strap or titanium bracelet, you could dive with it, work out with it, and then go chill at the bar with it — and its inclined balances and constant differential wouldn’t skip a beat either way. You might also experience the added benefit of going incognito, as it is highly unlikely anyone else would know what you have on your wrist — or have the same watch on theirs, for that matter. The power reserve of 72 hours is plenty to tide you over the weekend, in the unlikely event you take this beauty off from daily wear.

While the price of the DB Convexe has yet to be confirmed, it would most likely be in the ballpark between the price of its cousins — the Balancier S at CHF 195,000, Balancier S2 at CHF 205,000, and the last white gold 2016 Double Balancier at CHF 350,000. A lot of money, for sure, but each one truly limited and special.

There has been much debate on the secondary market values of stainless steel sports watches that every mother’s son (and daughter) seems to want. Is a final-series green dial or Tiffany blue dial really worth hundreds of thousands, or even millions of dollars? Does a 15202 or 16202 really look all that different from a 5402? Some say these companies are undercharging for their icons, and the retail price does not reflect what the market is willing to bear. This is life imitating art, imitating life, and so it goes on. Will we ever see the end of this fever pitch in demand for the same watches, and every other company offering an alternative to try and capture market share?

If you have that kind of cash to drop, it’s time to look elsewhere. To watches and watchmakers that are attempting something new. Not just a rehash of what’s been done before. Nostalgia will always have its place — we are human, after all — but maybe it’s time to look ahead. Where Greubel Forsey goes next is anyone’s guess, but the Double Balancier Convexe and its future progeny could very well be the next big thing in luxury sports watches. And they would be worth every penny.

#WatchFamForUkraine Solidarity Auction and How You Can Participate