The Superficial Value In Refinishing/Refurbishing Rolexes: A Watchmaker’s Rant – Reprise

Sitting in my living room one evening sipping on a neat Grey Goose, I got to thinking about the current state of watch collecting.

I had recently read Derek Weinberg’s story, The Current State Of The Pocket Watch: It’s Better Than You Might Think, which got me thinking about modern horology in general.

But first, here’s a brief anecdote that explains the background to this rant.

It was the British Horological Institute’s 150th anniversary, and I was a young watchmaking student attending a WOSTEP partnership school at the time, the British School of Watchmaking. The WOSTEP students, including myself, were honored to be seated at the table with Dr. George Daniels and his good friend Andrew Crisford.

I remember this dinner well: it was the first time I had seen an F.P. Journe watch in person, which graced Crisford’s wrist. Seeing the F.P. Journe, however, was not the highlight of the evening, dining with Daniels as an 18-year-old watchmaking student is clearly the winner there.

There were so many great horological names in attendance that weekend: Peter Speake-Marin, Stephen Forsey, the chaps from Frodsham, and, of course, the British Horological regulars such Justin Koullapis, Allan Middleton, Timothy Treffry, and Jim Arnfield, as well as Quill & Pad’s own Ian Skellern.

My good friend Scott (who went on to work for Roger Smith) and I sat in the pub on the Sunday evening chatting with Peter Speake-Marin about his watchmaking journey, imbibing multiple pints of beer. Speake-Marin wisely convinced us to blow off school the following day and continue taking in the BHI 150th anniversary celebrations.

When were we going to get another chance like this? The answer was never. And I have never to this day been in a room with so many horological greats, and I doubt that I ever will.

I had separately met many of these individuals before. Arnfield once journeyed to our school as he was friendly with Allan Burtoft, the man I owe my horological education to (patiently teaching my cocky 18-year-old self horology as I was nursing the odd hangover or two).

Arnfield brought along an incredible selection of watches for us to view. One I remember in particular was a Breguet pocket watch with a ruby cylinder escapement: this watch was truly a delight to see and I could understand how manufacturing such a movement was truly an outstanding accomplishment.

So, why exactly am I taking you through this educational watchmaking experience?

I am a contributor to multiple watch-related forums. I constantly see questions asked such as “who is the best watchmaker around to service this” and similar.

The same answers usually come up, but the thing I find so interesting is that the answers usually involve those who do the “prettiest” superficial work. In a word: case refinishing. And in other words: huge chamfers on Rolex cases, perfectly flat surfaces, and well executed sunburst patterns.

These watch restorers are often considered the best of the best, but I maintain that little regard is given to the movement. 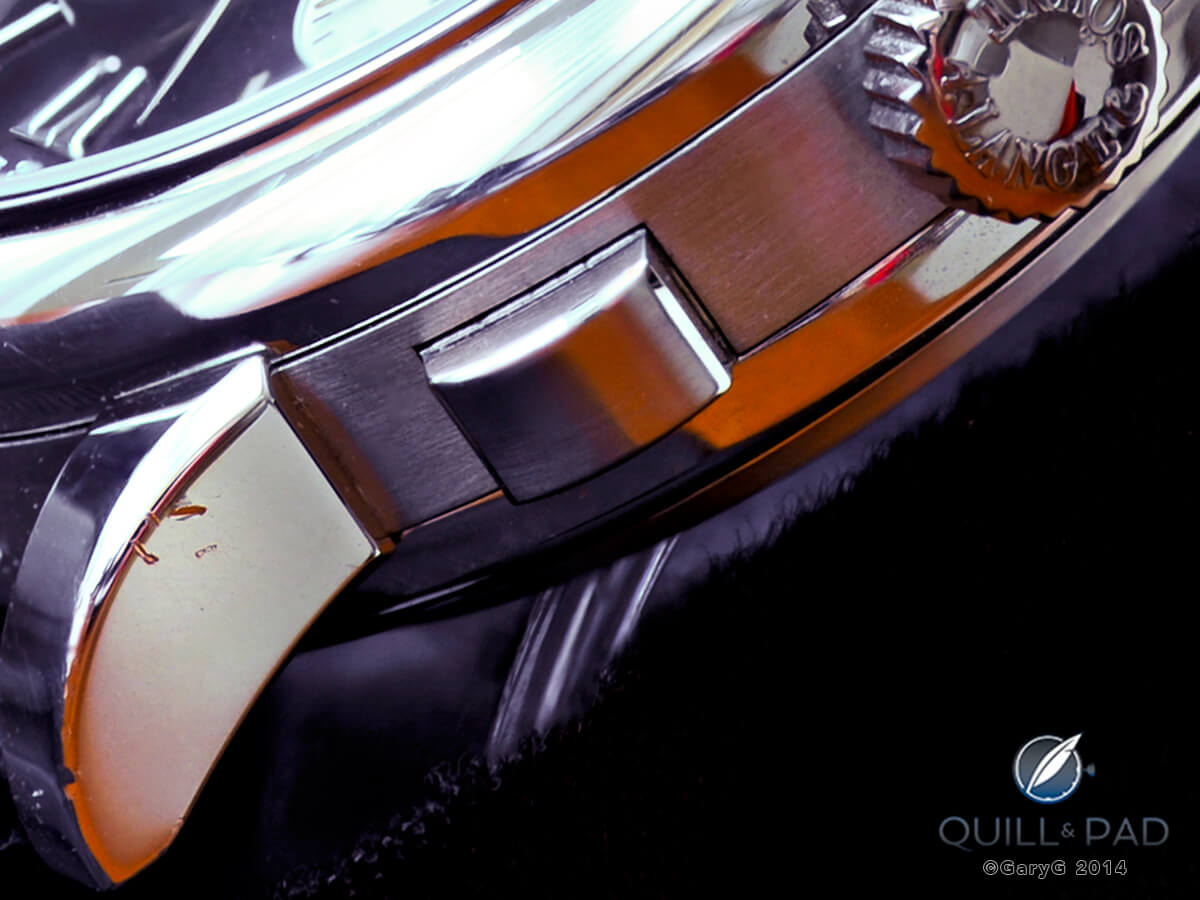 An A. Lange & Söhne Double Split that has been through some living before refurbishment

Please do not misunderstand me. Case refinishing is an important aspect of horology and is difficult to do well without the right equipment.

But, if I am being honest, once the expensive equipment has been purchased it is fairly standard work, and most people can be taught to do it well.

Vintage and pre-owned watches that have been untouched are all the rage and command huge premiums. Consumers pay double retail for stainless steel models of certain brands.

And for what? A brand name?

Is a Rolex Daytona worth double what the retailer is asking? No. It’s barely worth the retail price, as generally speaking retail prices are negotiable. 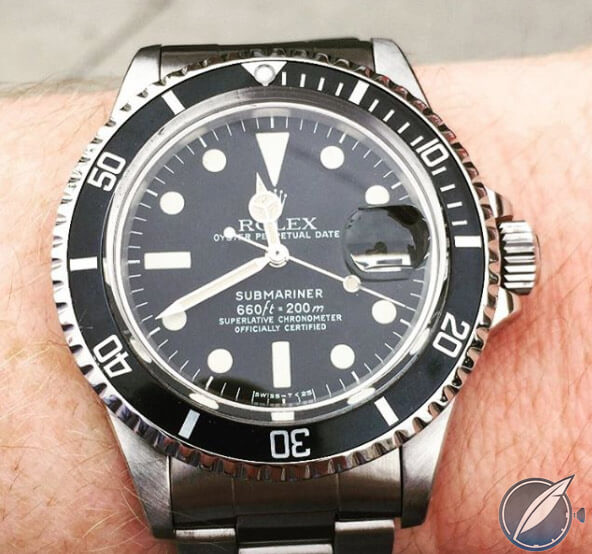 The author’s Rolex Submariner Reference 1680 from 1978

Now, I love a Rolex as much as the next guy. I own a Submariner 1680, which is my daily wearer, and I love it.

What am I getting at here?

Watches perceived as “hot property” are worth all the money.

Watches that have been “refinished with exceptional skill” fetch huge premiums, and the work commands top dollar. And so it should.

We live in a supply-and-demand world, so watches that are hard to come by should fetch high prices. The same goes for expert case refinishing; it too should command top dollar.

However, I feel as if so much has been lost in the noise. Exceptional horology has been forgotten in the mass. Roger Smith, George Daniels, Derek Pratt, Peter Speake-Marin, Frodsham, Jim Arnfield, and my brilliant instructor Allan Burtoft have all been left in the dust for a chamfer that is far too large in my opinion anyway.

In 2012 at Sotheby’s sale of the George Daniels Horological Collection held after the great watchmaker’s passing, a Rolex Datejust fitted with a co-axial escapement (and done so by Daniels’s own hands) was estimated to sell for £5,000 – £7,000. It eventually sold for £21,250 – which is less than the current market price of a Zenith-powered Rolex Daytona.

The Daniels-modified Rolex is a one-of-a-kind watch, which was personally fitted with a co-axial escapement by the greatest watchmaker our time has ever seen. And it is worth less than a mass-produced watch with a movement that hasn’t changed since the late 1960s.

That’s a sad state of affairs.

The current horological landscape only cares about the superficial: the chamfer, the lugs, the unpolished specimen.

What about the true horological genius right under our noses that we pass over on a daily basis?

Those who can chamfer a lug, create a sunburst case pattern, and polish the side of a case flat are considered the watch masters of today. I have news for everyone: if you have $15,000, you can purchase a lapping machine and produce the same results.

Yes, there is of course a level of skill involved, but nowhere near the level of skill it takes to perform movement-related horological restoration. Black polishing of components, re-bushing plates, re-pivoting wheels, and turning balance staffs are all much more difficult tasks, but no love is ever given to these as they are the unseen, forgotten aspects of modern horology.

But, hey, I guess I’m just an Audrey Hepburn fan in a Kim Kardashian world.

* This article was first published on May 23, 2020 at The Superficial Value In Refinishing/Refurbishing Rolexes: A Watchmaker’s Rant.

The Current State Of The Pocket Watch: It’s Better Than You Might Think

A Horological Guide To London