That I ever got interested in cigars is something I cannot really explain. It happened late last century, even though I had never (and still have not) had so much of a puff of a cigarette in my life, and not the slightest interest in ever doing so. I can’t even recall how or why cigars started, but I can say that like so many small interests, it grew into, if not an obsession, certainly a serious fascination.

Back in those early days, a good friend would host a monthly cigar dinner at a local restaurant. Try doing that these days and you are likely to find your head exhibited on a spike next morning. Good fun, good wines, good company, and a range of cigars that always featured something a bit special. They were very popular evenings.

One stands out. My friend was late arriving, which only heightened the anticipation – he never let us in on what the featured cigar would be prior to the evening. Would it be a great Cohiba, a perfect Partagás, a brilliant Bolivar, or a magnificent Montecristo? We were all guessing.

Finally he arrived. We had “intro” cigars to keep us ticking along until this stage (usually a Montecristo 4 or something similar), before he announced that evening’s featured cigar: the Saint Luis Rey Double Corona. Saint Luis Rey? Was this a joke? To say that the response was a bit underwhelming would be a gross exaggeration. Most people looked like they’d just found a live cockroach in their martini. 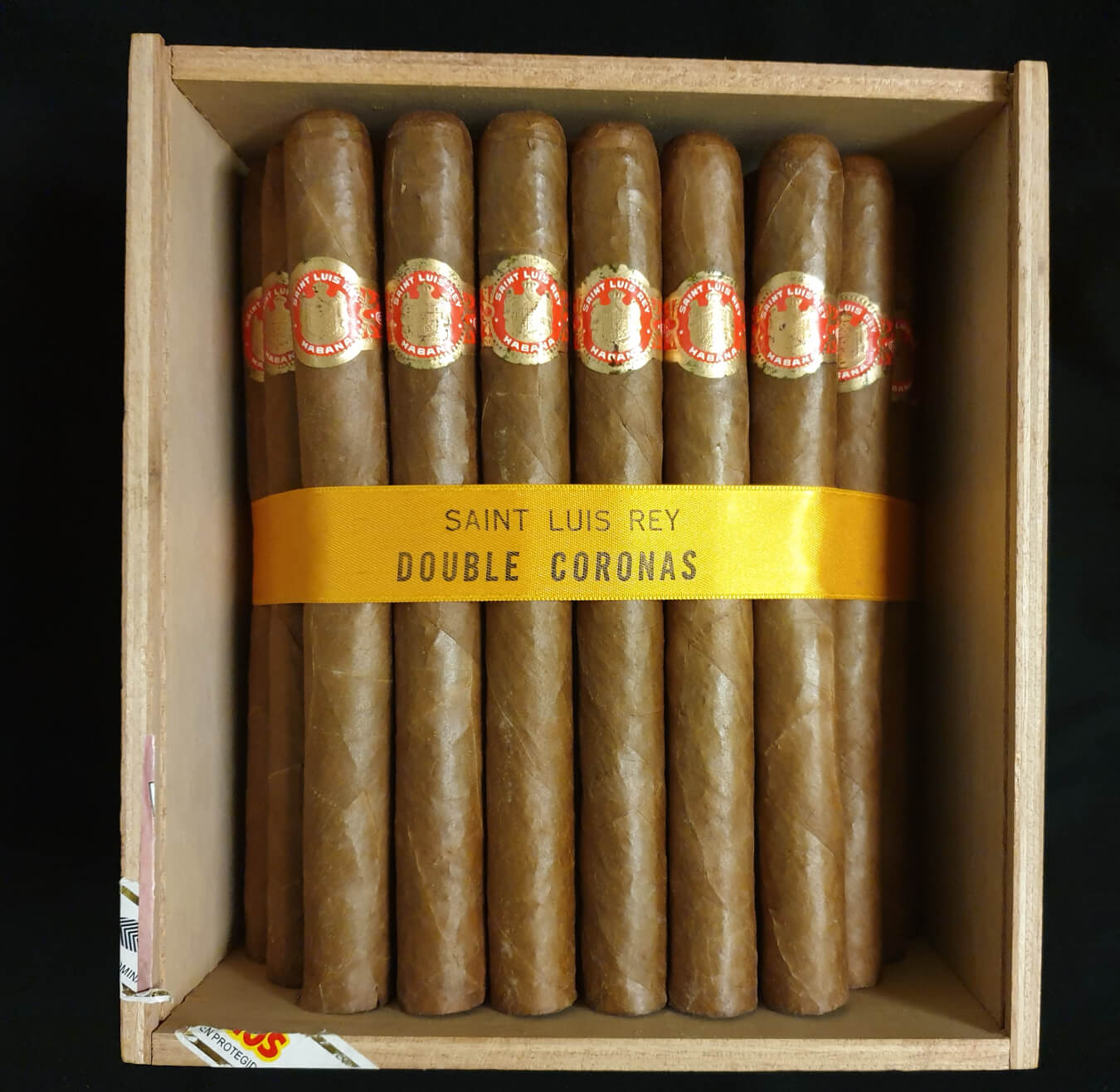 Of course, this wouldn’t be much of a story if the cigar had been a flop, although there was far from unanimous acclamation for it (I still believe that some guests failed to see its glories as they were so attuned to the expectation of one of the big guns). Personally, I loved it.

And I remember that cigar well. It was the 2001 release, the very first ever made. Stunning. As is typical of the cigar world, when one says “2001” the reality was more 2001/2002 and they still did not arrive until a year later, this dinner taking place in May 2003.

I especially remember the ash. To this day, I’ve never seen anything like it. It was well over half the length of the cigar before it finally parted company and dropped away. That speaks of construction at the very highest level.

Before I get into the specifics, at the end of the dinner, I recall my friend noting that the price was AUD$40 a stick – fairly hefty in those days – but they were half price that evening. He only had eight left. I grabbed the lot. It was quite some time before any arrived Down Under again, but I would always grab what I could. Sometimes only a few sticks and then for a few years, a cabinet (a cabinet contains 50 sticks).

Needless to say, this was not all one-way traffic. I was certainly enjoying quite a few at this time. All that said, and as good as subsequent releases have been, nothing has quite matched that legendary 2001 release. I think I still have one left somewhere, but in those days they were all unbanded so occasionally they’d get smoked “accidently.”

As happened a few years ago. Looking for something easy and simple one evening to enjoy in front of the footy, I fired up a cigar that I simply could not place. Unbanded and a Double Corona, but sensational. Suddenly, the penny dropped. I was smoking one of my very last remaining 2001 SLR DCs. These cigars were given bands at some stage in the mid-2000s. It is believed to have occurred with the 2006 releases, but time is a flexible concept in Cuba, so assume it is around then, give or take a few years.

Who is Saint Luis Rey and what does it have?

The brand Saint Luis Rey dates back to 1940, when it was created by the British firm Zamora y Guerra (as ever, there are various versions of history here, but, again as always, I look to the indispensable An Illustrated Encyclopedia of Post Revolution Havana Cigars by Min Ron Nee as my most reliable source). The most generally accepted version of the name comes from the famous 1927 Thornton Wilder novel The Bridge of Saint Luis Rey. It is important to distinguish this house from non-Cuban wannabees and another Cuban brand, San Luis Rey, which is a completely different operation.

Until the 1990s, the brand was restricted to the UK. It had always been a very small house though during the 1980s it began to expand and gain more attention. Back in the 1990s/2000s, there were up to nine different cigars available under the SLR brand, the height of its glory. These days, it is much reduced. There have been a few cigars released under various special programs, such as the Regional Releases, but the actual number of cigars now in the SLR range might be as low as one – the Regios.

Min Ron Nee believes that the tobacco for this brand comes from a “unique area” due to the “bean flavors” that he finds throughout the range, especially in the Serie A. He also sees notes of coffee, honey sweetness, vanilla, a hint of grass, and a very subtle saltiness. I don’t get much of that bean character, though I certainly see the honey as well as notes of vanilla and coffee. But in a good SLR, especially the DC, what stands out for me is amazing stone fruit notes, especially dried apricots and apricot kernels. Unmistakable.

So what is left in the SLR range? As that same friend said to me the other day, if you try and work out the thinking and/or reasoning behind the decisions made in Havana as to what cigars are to be introduced and what are to be discontinued then you will get nowhere. That route, madness lies.

Let’s take the SLR DC. Introduced in 2001, it was a slow burner rather than an instant success, but it soon developed a cult following. This grew over the years and any release soon sold out. So why on earth would you discontinue them? Beyond me.

Did they need the tobacco for some of the many short, fat cigars now released? Well, you can only sell the stuff once. It helps no one if all cigars become versions of a single style – sure, we are not there yet but who can keep track of the never-ending releases of large ring gauge, short-length cigars, while many formerly popular styles simply disappear. Are they officially discontinued? No one seems able to be able to answer that.

The excellent www.cubancigarwebsite.com suggests that the only SLR cigar still in production is the Regios. It claims Serie A was discontinued in 2014, Double Coronas in 2013, Churchills, Coronas, and Petit Coronas in 2010, while Lonsdales supposedly ceased production in 2006. But there was another batch released from 2010. So who knows? It is claimed that Frank Sinatra was a great fan of the Lonsdales. 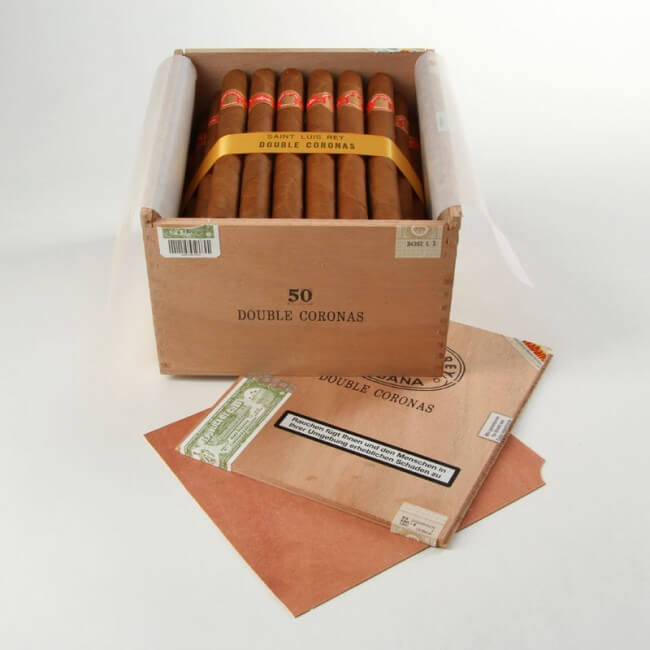 That is the problem with Cuban cigars. Just when you think something has met its doom, suddenly there it is again. While all the SLR DC fans I know accept that it does look like the cigar has been discontinued, every single one of them has not given up the idea that it is just as likely that they will suddenly be available again. Fingers crossed that it is so.

Min Ron Nee probably devotes more text to the curious case of the SLR DC than he does any other cigar. The technical details, a 49 ring gauge and length of 194 mm, which is known in the factory as a Prominente. Where it gets confusing is that SLR used to have a cigar of these dimensions called a Prominente. Extremely rare, these were introduced in 1988 and then discontinued ten years later. It is believed that the economic conditions in Russia and the collapse of the former USSR contributed to the decision to stop production.

Min Ron Nee has described the SLR DC as having tobacco that was “incredibly substantial . . . the most impressive” he could recall in a new cigar.

By chance, I had the opportunity to look at two sticks from different boxes in recent weeks. One from my own collection and one for a video review I do with that same friend. They were both from around the 2004/2007 releases and both were remarkably similar. You would think that would be a given, but if you did think that then you are not as familiar with Cuban cigars as you might wish.

They were complex, surprisingly mild, and impeccably balanced, offering notes of stone fruit and nuts, apricots, a hint of orange rind. Construction for both was truly first class and both cigars gave every indication that had they been allowed they might have gone for a decade or two more. Stunning, brilliant cigars. I gave both of them 98. They won’t all reach such heights, given the variation Cuban cigars can offer, but also they do have the ability to hit that magic 100 on occasion.

The SLR DC is truly one of my favorite cigars. If they are indeed discontinued, that will count as a tragedy of immeasurable proportions. But all is not lost. You will occasionally find a cabinet or two at the better cigar retailers and they do appear at cigar auctions now and then. The price is of course variable because of the situation, but if you are paying less than $100 a stick, you are getting a steal.

These should be on the bucket list of every serious Cuban cigar lover.

Cohiba Robusto: The Cuban Benchmark For All Cigars

Cohiba Maduro 5: Some Of The Most Faked Cigars In The World (For Good Reason)