Recently, Ulysse Nardin  announced its support of a program designed to study the ecosystem of blue sharks in the Atlantic ocean. The blue shark is an endangered species and by studying its habits and environment in a non-invasive manner, scientists  hope to acquire knowledge that can help save the species. 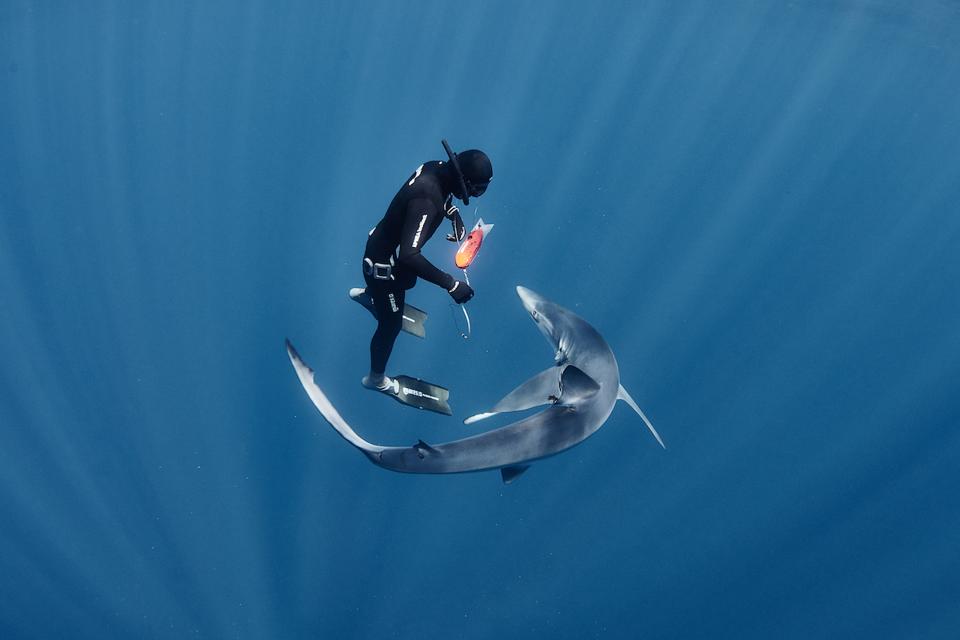 “Free diver and underwater photographer Fred Buyle, who has set records with his dives, joins the tagging efforts, noting that advances in bio tagging have helped with the research. For this project, Ulysse Nardin has offered a grant to the marine research center of the Azores University to acquire 10 pop-up biologging sensors for tagging and tracking blue sharks.”

“One of the most difficult parts of collecting the research is the actual tagging of the animals, which typically requires catching and restraining them. However, this has proven difficult, so advances are being made in biologging tags that can be non-invasively attached to the shark, and that have very limited effects are necessary. Buyle, working with the scientists and marine ecologists at the University of the Azores, is using his free diving skills to creatively attach new state-of-the-art tags to the sharks.”

“Buyle and other free divers simply place a type of self-releasing lasso onto the shark’s pectoral fins, attached to it is the low-drag torpedo-shaped camera tags and sensors. The tags can withstand depths of 2,000 meters and can track temperature, speed, depth, and other information, as well as capture video. They are even equipped with red LEDs (light-emitting diodes) that are triggered at 100 meters deep to capture the ocean in darkness. The LEDs are engineered so they do not interfere with the shark’s vision or affect its prey. Each shark is only studied for a period of 24 to 48 hours before the lasso dissolves and the tags float to the surface where they transmit satellite beacons so they can be recovered.”

“Throughout the tagging process, Buyle, a Ulysse Nardin brand ambassador, wears his 44mm Diver watch. The titanium timepiece is water resistant to 300 meters and features a concave bezel with domed sapphire crystal and is powered by an in-house-made automatic movement. It retails for $7,900.” (Parts of this article were reprinted from Roberta Naas’ “Perfect Timing” column on Forbes.com.)

3 New Tourbillons From Watches & Wonders 2020: A Pursuit Of Personal Passion