The year is 1502 and you are a stonemason living in central Mexico under the rule of the newly crowned Tlatoani (leader), Moctezuma Xocoyotzin. Your new emperor has called for the creation of a massive ritual stone table that is going to take you and another mason years to complete. The request is a boon to your family, which will be blessed under this new reign as wealth and prosperity come to all in the city-state of Tenochtitlan.

But little do you know that right then, 2000 miles toward the rising sun is a race of men that will soon leave everything you know and love in ashes. The Spanish are just a couple of decades away from invading Mexico, and with the help of enemies of your people they will brutally conquer your city and bury this stone table to hide the traces of your culture. You aren’t even aware that you are at the end of the Mesoamerican Postclassic Period that will define the last days of a distinctive culture.

In that ignorance you set to work, slowly tracing and carving the intricate details of the symbols and animals crucial to the various ceremonies. Day after day you slowly shape the stone into something that will last beyond the end of the empire, though you are unaware of this fact. You are surrounded by objects that sing the glories of your ancestors, yet you will have no ancestors that continue in your ways of life. You are the last generation to live this culture; time will march on and you will be known only by your work.

This is the story similar to that of thousands, possibly millions, of talented artisans across the history of our species. More cultures and civilizations than we currently know have been lost to the sands of time, whether through famine, disease, disaster, or hostile destruction – cultures faded from our memories, never to be heard from again.

Impressively, every one of these cultures had its own complex relationship with time, its measurement, and its representation. From calendars to creation stories, every culture understood time differently and developed unique ways of thinking about it. 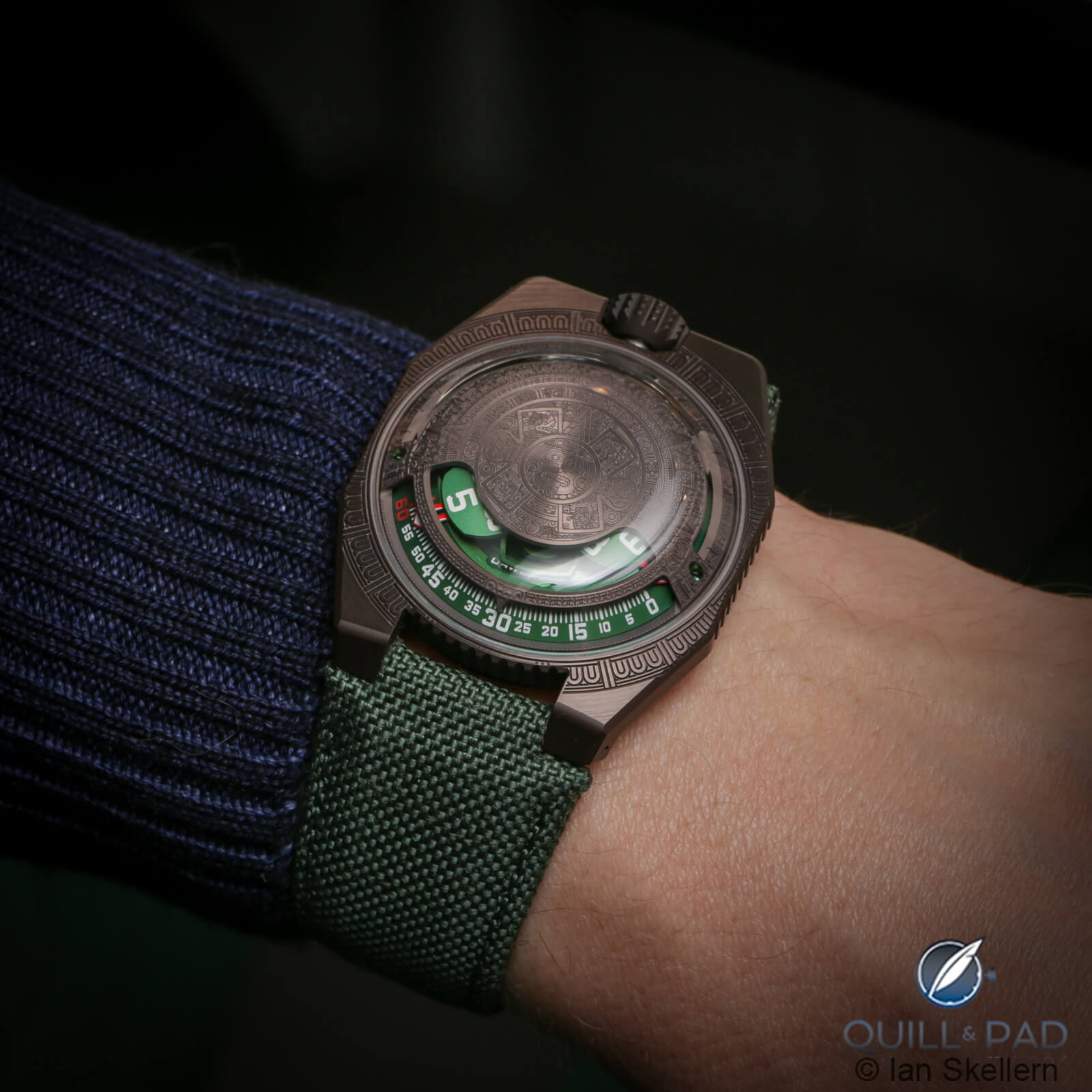 Urwerk UR-100V Time and Culture on the wrist

That fact inspired Urwerk to develop a design series to honor the historical cultures that have related to time. The first of which is the UR-100V Time and Culture. This timepiece focuses on the Aztec sun stone, highlighting the complex relationship between the Aztecs, the seasons, and their place in time

This horological experiment in design and culture is based on the popular UR-100 SpaceTime, which first debuted at the end of 2019. The core of the UR-100 is the satellite hour display that travels along a 120-degree arc, tracing the minutes from right to left before another pointer emerges at zero. The pointer from the previous hour continues around the perimeter to display astronomical indications in a pair of small windows on each side of the case. 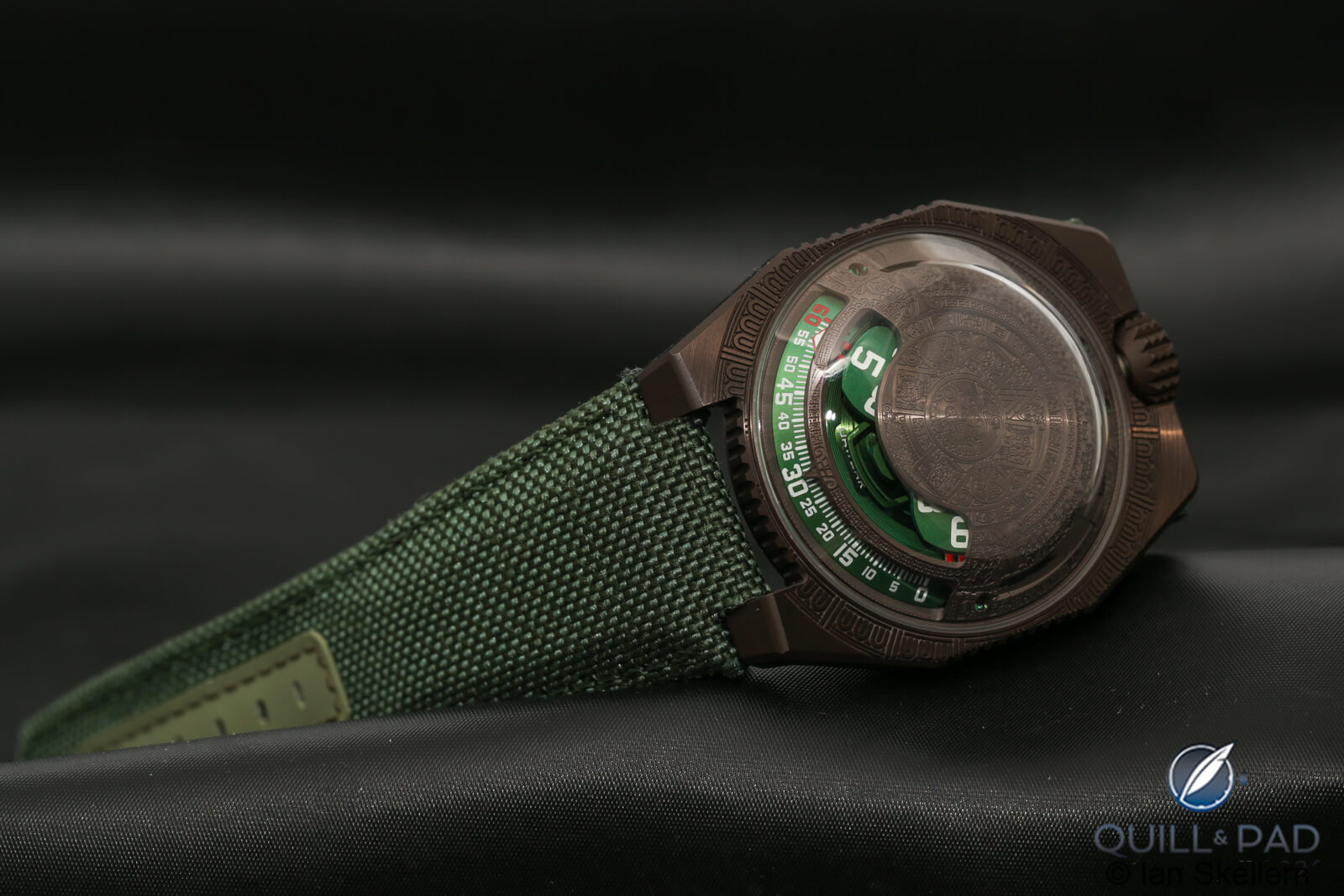 The case was a fairly tame creation for Urwerk at the time, which made sense as the UR-100 was the most accessible piece from the brand to date. But the new UR-100V Time & Culture adds a whole new perspective to the piece.

This is where we come to the Aztecs, the sun stone, and a man from Singapore. The idea originated from a conversation with Su Jia Xian, better known as SJX, a watch journalist and collector from Singapore. In a conversation, SJX described the UR-100 combined with the cover of the original UR-103 or even the openable cover of the UR-105 with intricate engraving across its surface, perhaps something akin to the Mayan calendar. The result of further conversations and creative brainstorming between Urwerk co-founders Felix Baumgartner and Martin Frei was the absolutely stunning UR-100V Time and Culture.

The domed plate covering most of the hour carriage is entirely engraved with a copy of the iconic Aztec sun stone, a ceremonial stone slab depicting a variety of animals, elements from nature, and important aspects of Aztec life. The case is made of steel with an aged copper finish, something I would argue looks more like a black oil-rubbed bronze with its dark warmth. 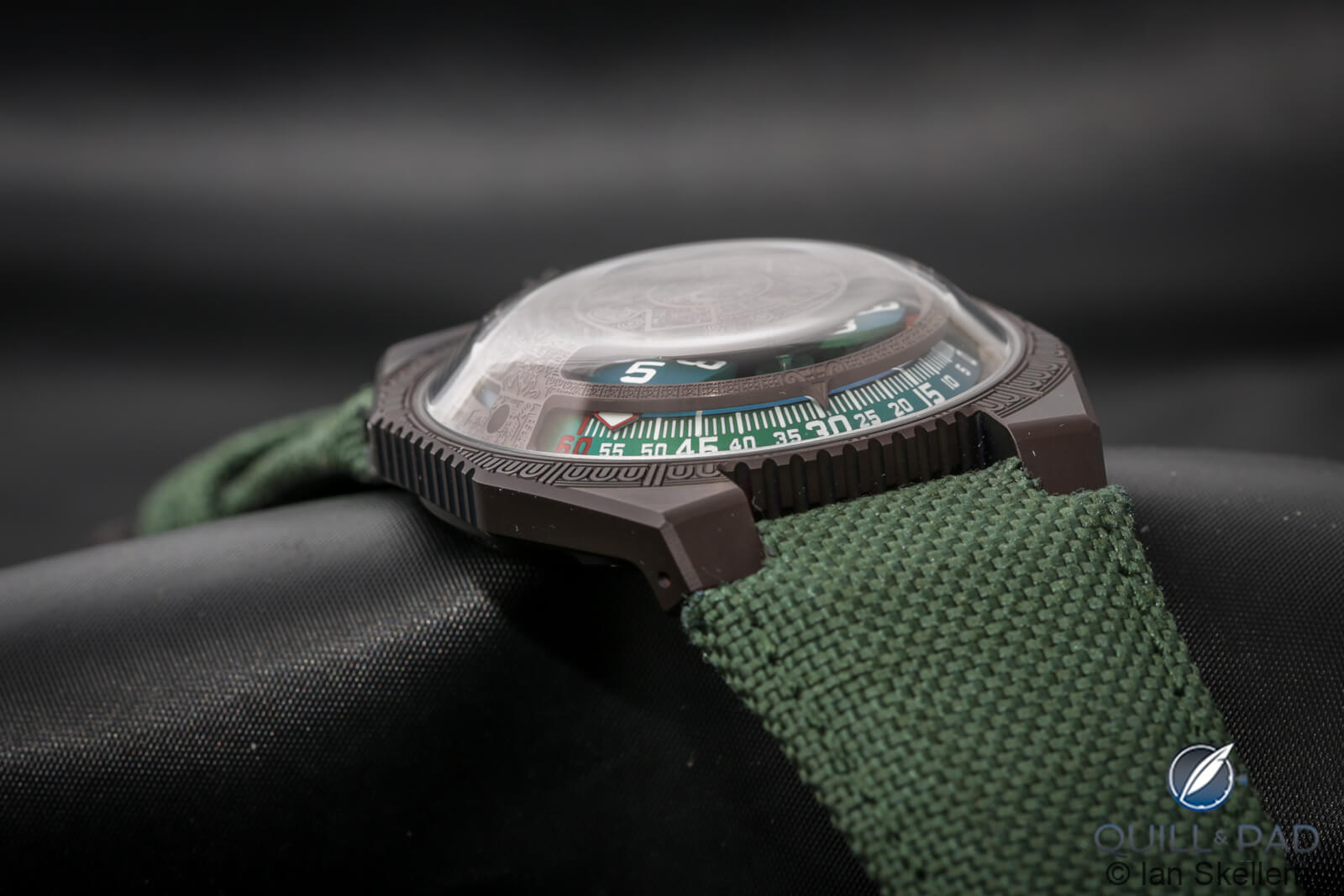 The finish is well chosen for the UR-100V Time and Culture, making it feel appropriately ancient while still clearly being a science-fiction watch. In the window just after the 60-minute display, the tip of the hour hand tracks physical distance that the earth travels. In this case it is the distance covered by a person in Mexico City every 20 minutes as the world rotates, approximately 524.89 kilometers. It’s a very human-centered scale, although it displays something nearly no one would be aware of since it took thousands of years to even realize we live on a sphere rotating 360 degrees a day.

Speaking of that sphere, the second window is an astronomically centered scale tracking the distance the earth orbits around the sun every 20 minutes, approximately 35,742 kilometers (it orbits at a speed of roughly 29.8 km/s). This combines both the terrestrial concerns of the Aztecs with the celestial aspirations they had as they charted the night sky with incredible accuracy. 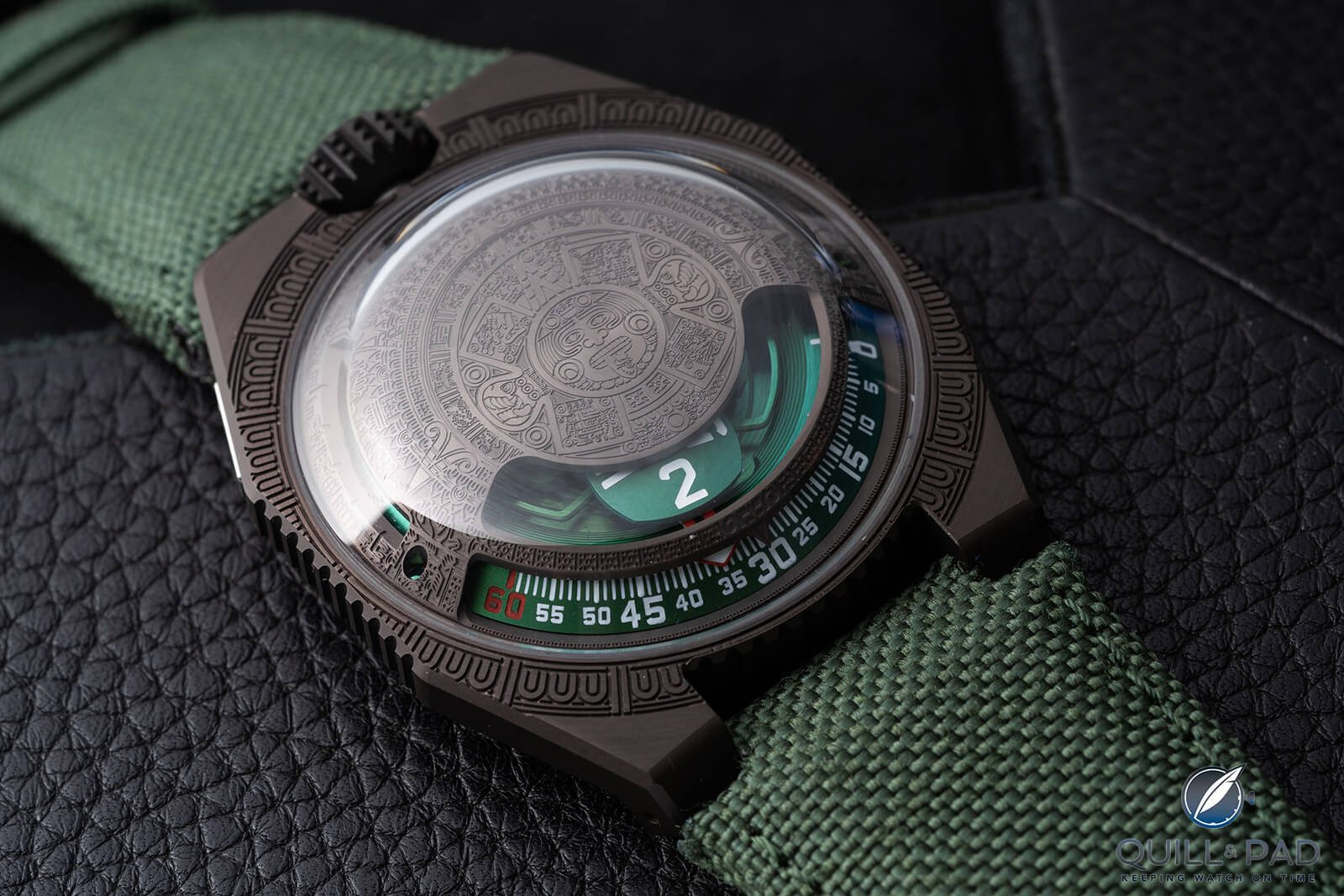 The universe and time

Both time and the universe are at the center of the 100V collection, a line dedicated to “perceptions of time through the ages and cultures,” as Urwerk explains, exploring the many ways that humanity has related to and tracked time throughout history. The Aztec sun stone had a variety of uses but one related to the Aztec calendar: the inner ring refers to the 20 days of the 18 months in the Aztec solar calendar. The glyphs represent different cyclical concepts of time and their relationships with cosmic conflicts in Aztec ideology. 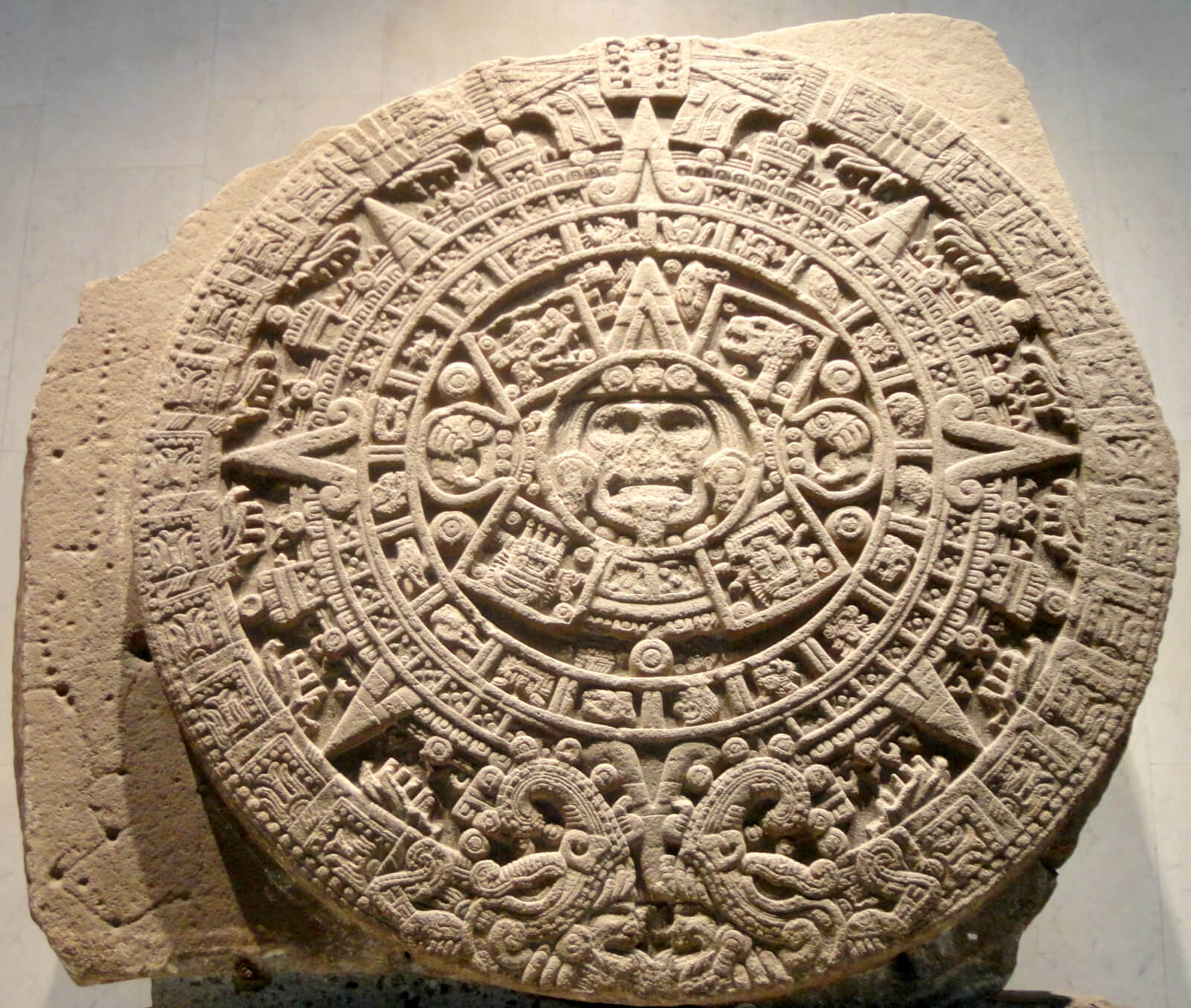 The stone also gives an insight into how the Aztecs divided their time: the solar calendar was based on a 360-day cycle with five intercalary (unnamed) days inserted between the years that were thought to be bad luck, giving the Aztecs a functional 365-day year. The Aztecs also had a 260-day cycle related to their 20-day month corresponding to 13 days, which would give days names such as One Crocodile or Four Vulture. This imbalanced relationship led to the 260-day count, which is how long it would take for it to realign, making One once again a crocodile.

That is how the Aztecs understood their century as well: an Aztec century was 52 years, which was the number 13 multiplied by four main deities and cardinal directions: Tochtli (rabbit/south), Acatl (reed/east), Tecpatl (flint/north), and Calli (house/west). This corresponded to a specific relationship within the 260-day count. As 260 days does not evenly divide into 365, the first day of the year and the first day of the day count became misaligned after the first year.

All of this information is effectively carved into the Aztec sun stone and now into the face of the UR-100V Time and Culture. 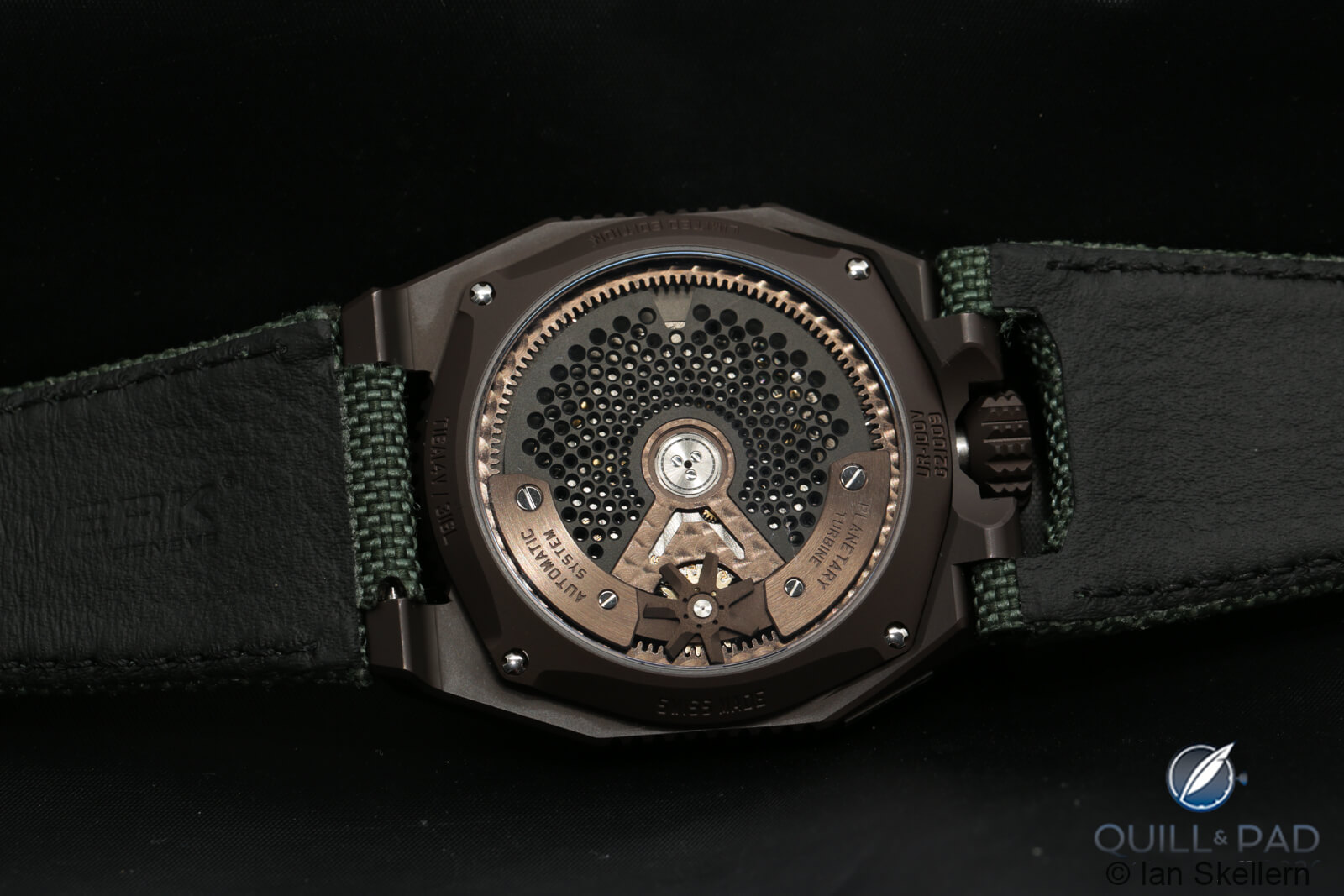 Back of the Urwerk UR-100V Time and Culture

The original sun stone is a massive 358 centimeters (nearly 12 feet) across, 98 centimeters (3.25 feet) thick, and weighs in at a whopping 27 tons, which gave the stone masons plenty of room to carve all the intricate details.

Urwerk had less than 41 millimeters, or 1/1000 of the available space. This meant the design required an engraving bit with a tip of only .05 mm, and the design is incredibly fine. The recesses were finished via abrasive blasting for a nice matte finish while the surfaces are satin brushed to provide a bit of a glow to the engraving. 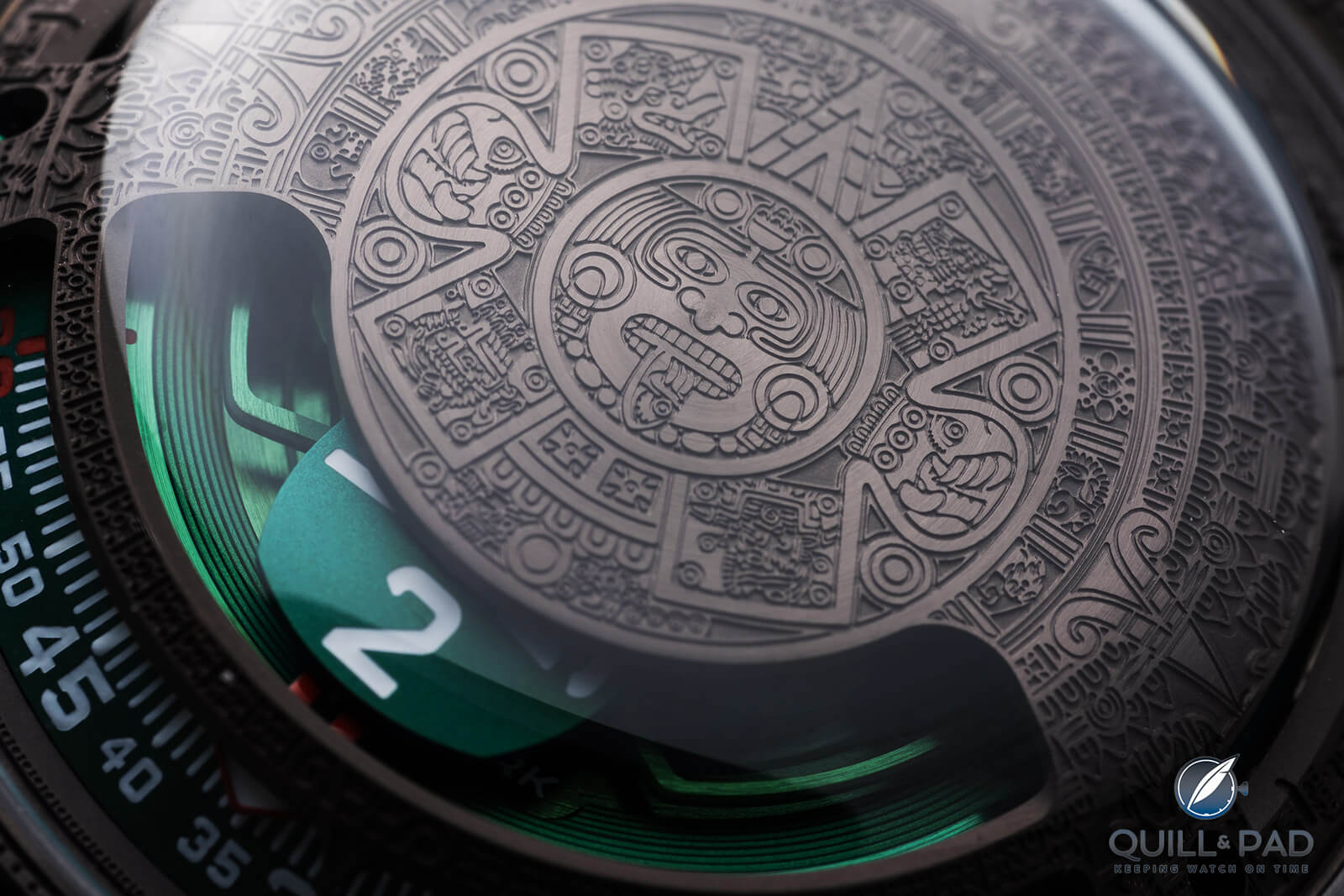 The minute track, hour carrousel, and underlying plates have all been finished with a glittering emerald green color, which also extends to the strap, a woven green Baltimora fabric that adds another layer of flair to the UR-100V Time and Culture. The domed cover over the wandering hours rests below the sapphire crystal, protecting the delicate engraving. But the design extends onto the case with a motif surrounding the crystal as a quasi-bezel, tying the entire presentation together. 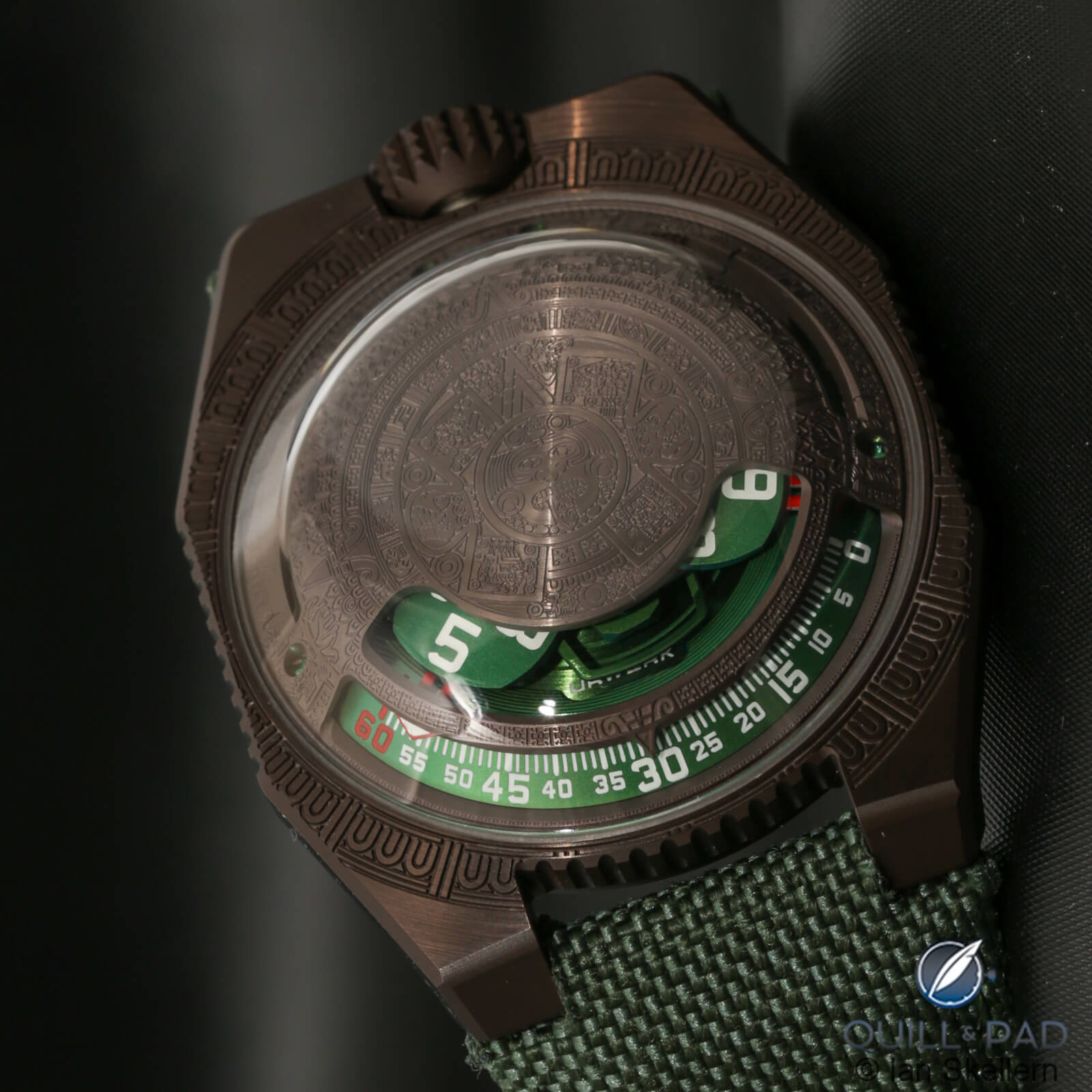 A few mysterious details are also at play: the initials of SJX are found micro-engraved into the sun stone design and a Mayan numbering system is there to be deciphered. Finally, on the side of the case is a plaque with a mysterious pair of symbols that aren’t described by Urwerk, so they remain to be discovered and understood by the observer.

History is like that, without every answer given to you, and that is the wonder of discovering how different cultures related to space and time. The sun stone is an artifact that provides a glimpse into Aztec culture, but it hides just as much as it exposes. We will never fully understand that culture and the importance of how time played into the lives of its people, just like people of the future may not grasp our own relationship with weekends, holidays, or how we celebrate the new year. 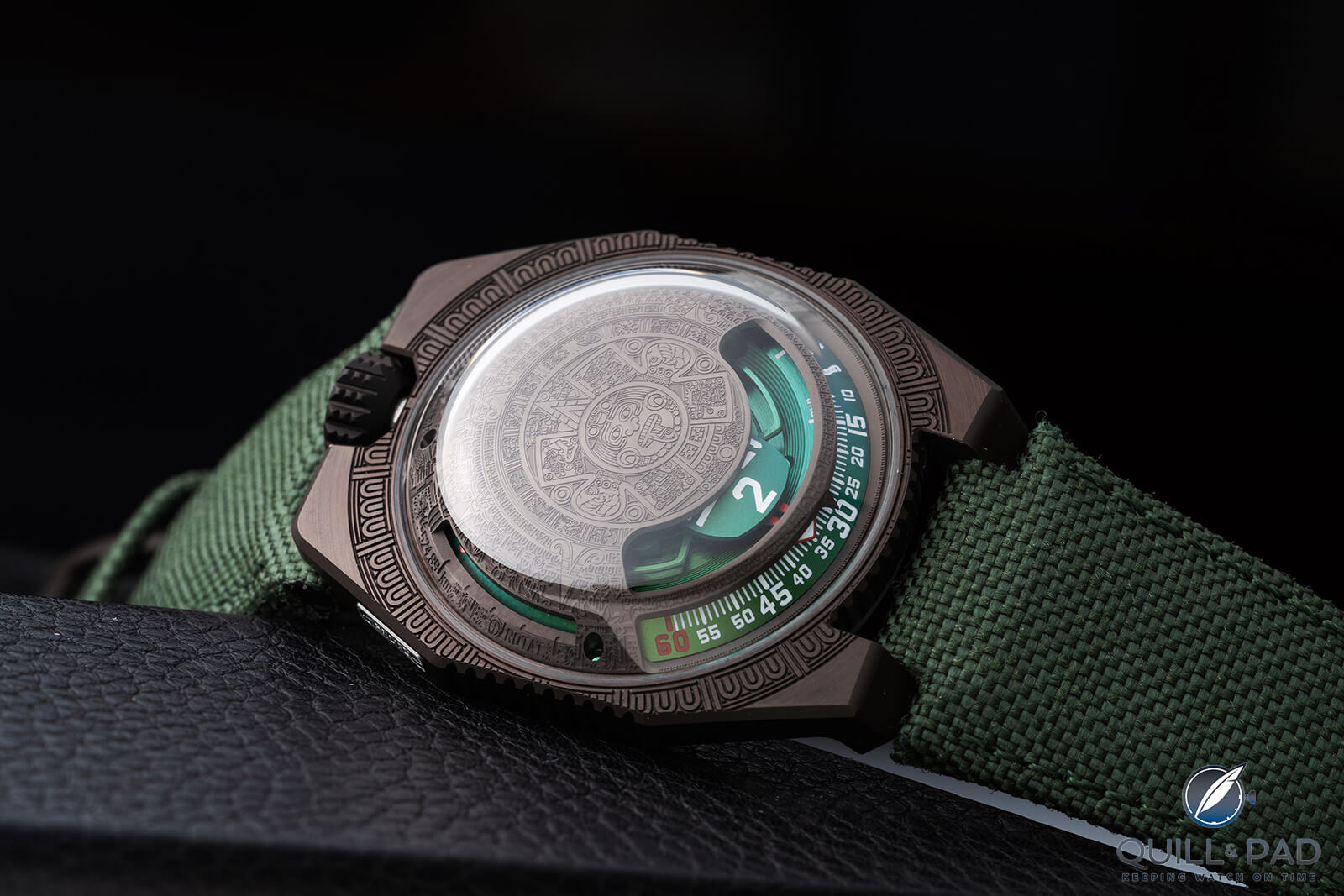 The UR-100V Time and Culture is the first entry into a new concept exploring humanity’s relationship with time and space, and there’s no one better to begin this journey than Urwerk. Nor where better to start than with the fascinating Mesoamerican culture of the Aztecs.

The concept is unique among watch brands, and I can guarantee you that with Frei and Baumgartner at the helm, the next editions will be just as extraordinary and intriguing!

Until then, let’s try and break down this timepiece inspired by a more than 500-year-old relic!

Back To The Future: The Urwerk UR-105M