Last year I met with a team of watchmakers in La Chaux-de-Fonds working on an interesting new watch that had yet to be introduced to the public. Housed in small offices that once belonged to a famous watch brand, the air of traditional watchmaking was all over this workspace, even though its clean, quiet atmosphere and high-tech office equipment told a different, more modern story.

The watch that I was about to see seemed anything but traditional: the Vanguart Black Hole Tourbillon concept is based on an astronomical black hole, a region of spacetime where gravity is so strong that nothing can escape, even light. 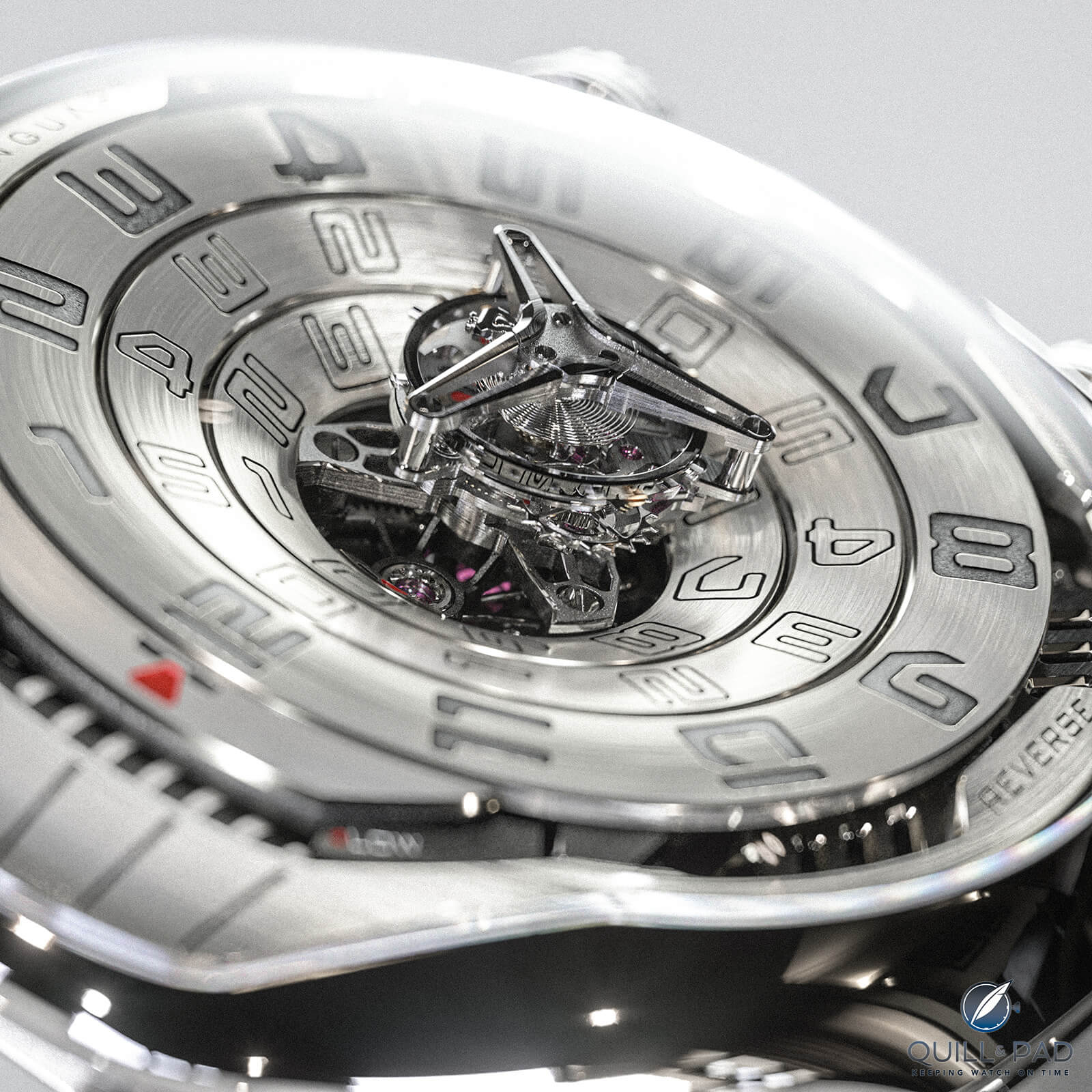 What is the Vanguart Black Hole Tourbillon?

One of the watchmakers I went to see that day was Axel Leuenberger, formerly of Audemars Piguet Renaud et Papi (APRP), who kindly took the time to present the Vanguart Black Hole Tourbillon. “Our brand is trying to achieve something ‘impossible’,” he assured me. “[Horologically reproducing] a black hole!”

This first timepiece emerging from Vanguart aimed to make the astronomical phenomenon of the black hole in horological terms.

The wearer has no choice but to visually engage with the tourbillon before noticing the time displayed on disks. 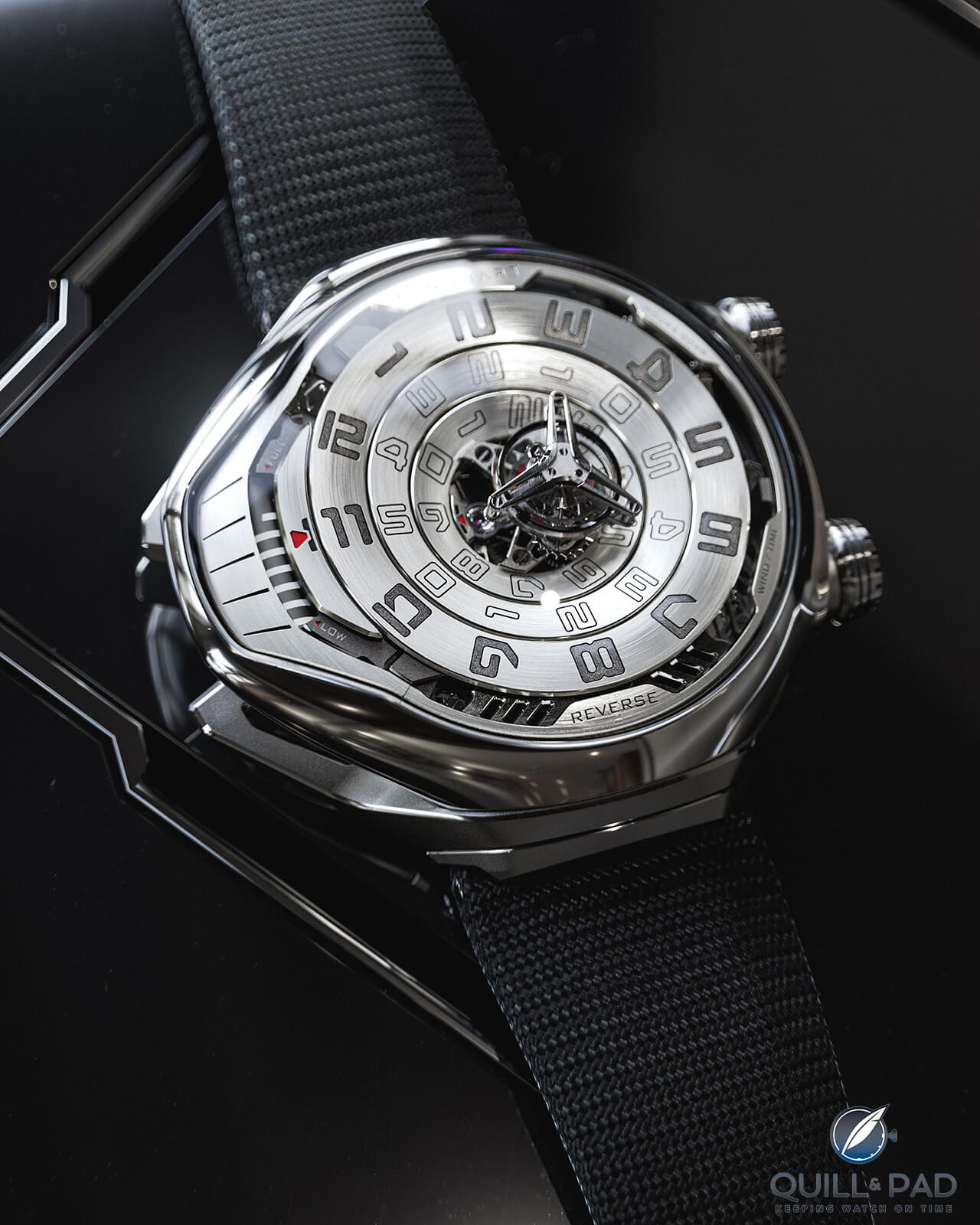 The time is read using three disks surrounding the “black hole,” a flying tourbillon that lifts up out of the center of the timepiece. These disks, which are shaped to resemble a vortex around the tourbillon, need a ton of energy to move, and a flying tourbillon is already quite complex by itself. “These are new complications that are really difficult to make,” Leuenberger earnestly made clear. “We are really proud of this.”

“Our goal with Vanguart is to make art objects, sculptural objects; it’s more about an artistic point of view in making objects we love. But we are quite tied to tradition, too, so all our components are traditional; 100 years from now a watchmaker would be able to remake the parts,” Leuenberger explained his new company’s objective.

The movement and case of the Black Hole Tourbillon were designed together, making it one single process right from the beginning. “We were able to mold and shape the case around the movement this way,” Leuenberger stressed. “It makes it lighter and easier to wear.” 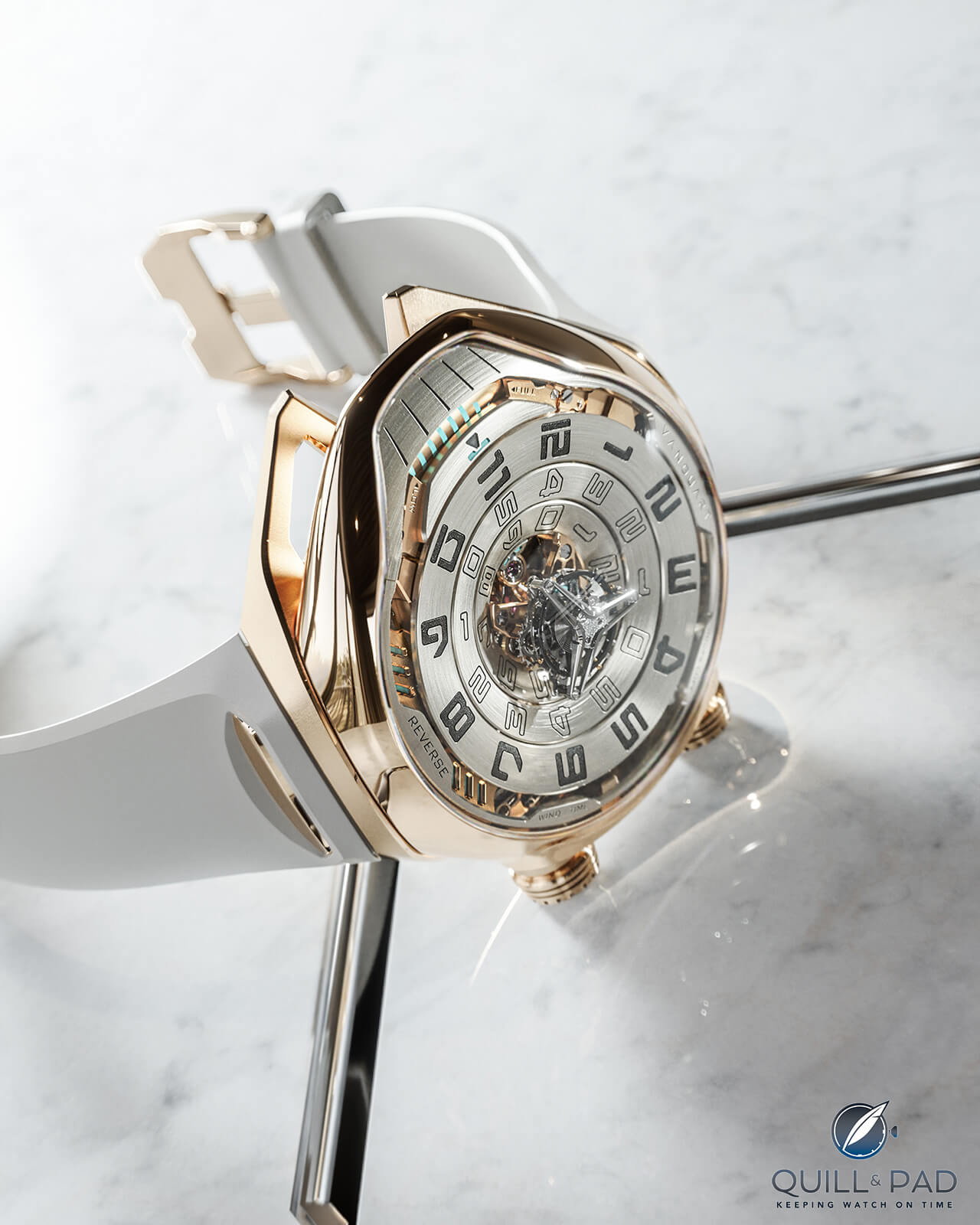 As the team was looking for new shapes, the watch went through more than 100 forms before settling on this one. “And all these new shapes are hand-finished,” Leuenberger said.

Every single component was designed in-house; no base movement was used in the Black Hole Tourbillon. “The value is in the design and the process,” he explained. 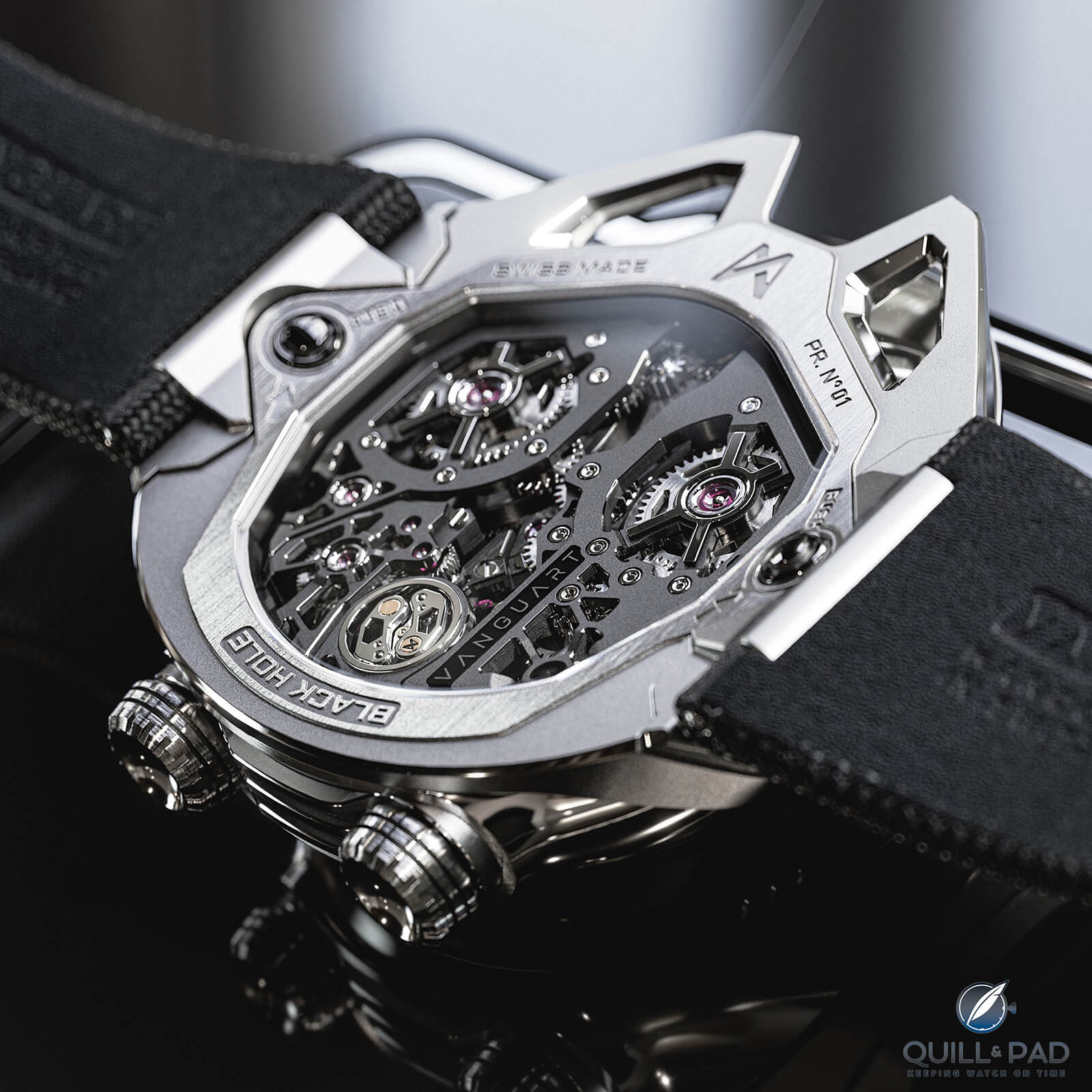 Back of the Vanguart Black Hole Tourbillon

While proprietary manually wound Caliber T-1701 – the “black hole caliber” – is visible only from the back, the front features its spectacular flying tourbillon, which underwent 18 months’ worth of testing to perfect. The movement took two years to develop.

The flying tourbillon itself was also designed in-house. Weighing just 0.225 grams, it comprises 88 components made in grade 5 titanium. Every component is entirely hand-decorated. 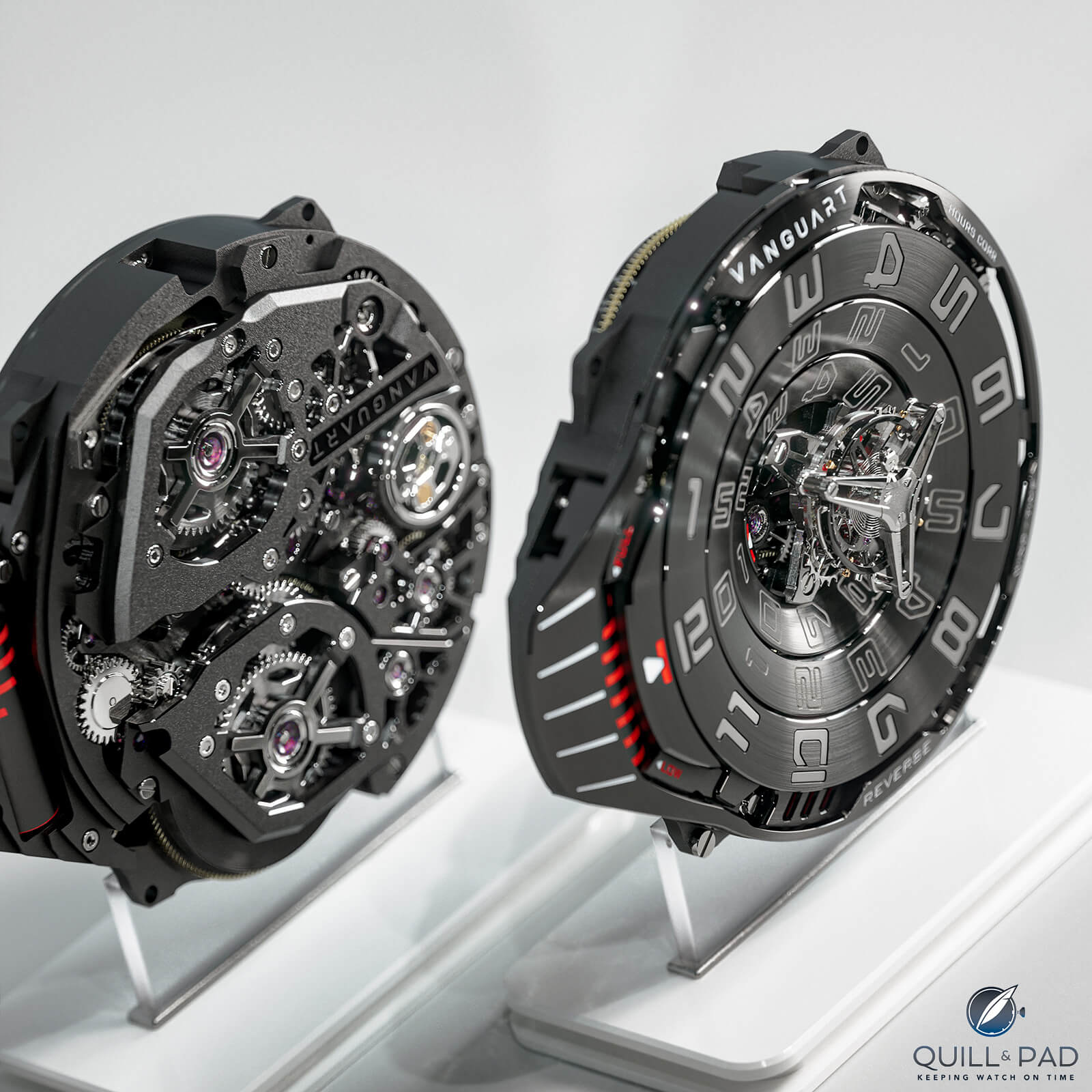 Vanguart Black Hole Tourbillon Caliber T-1701, uncased, from the front and back

The movement, which is only 7.2 mm in height, runs on two spring barrels, one for the time (gear train) and the other only for the levitating animation. They are regulated by a component that Leuenberger at first described as a flying regulator, but which is more like a governor found in a minute repeater. 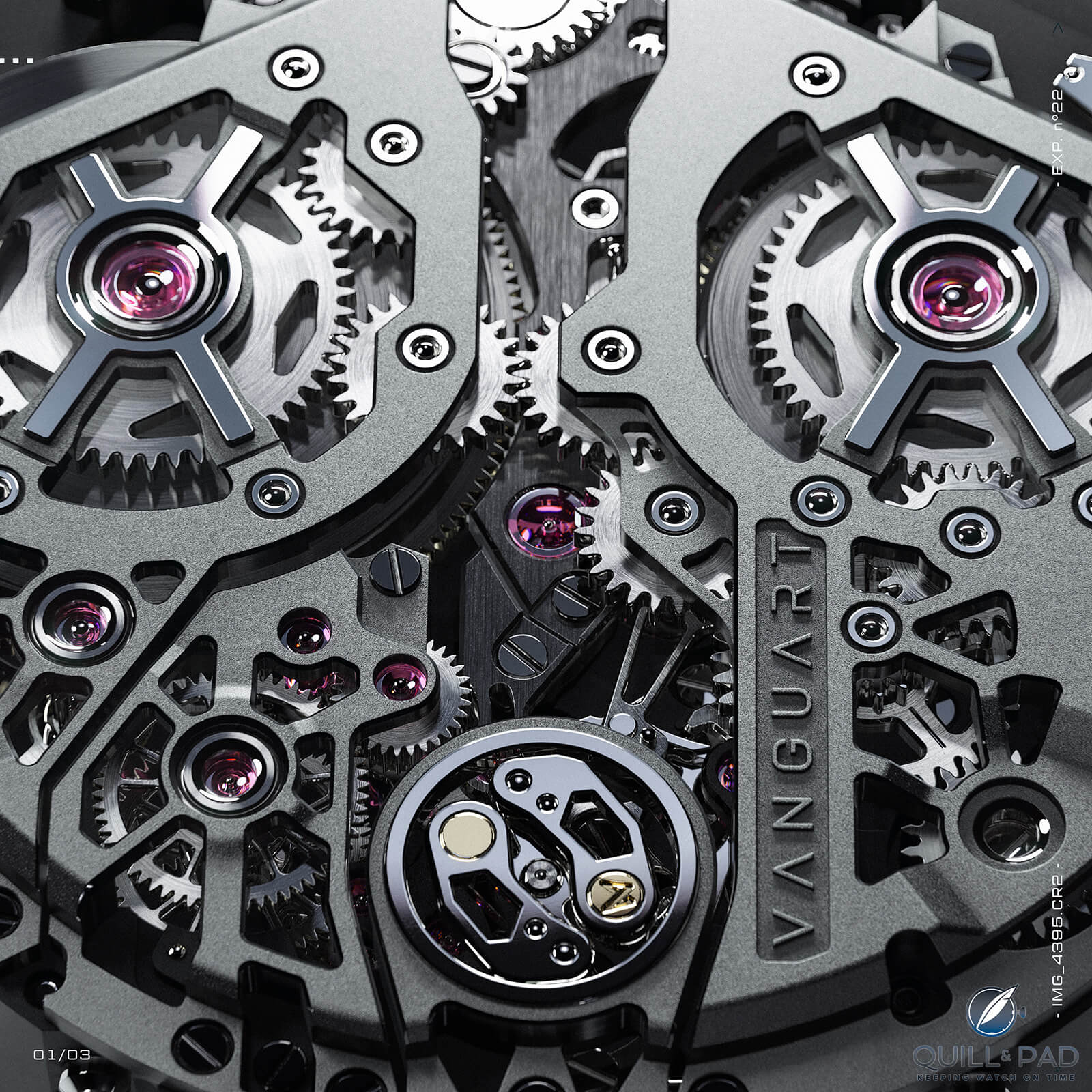 Despite its futuristic look, it is important to reiterate that this movement is completely made of traditional materials – no silicon and no LIGA included – and entirely traditionally hand-finished.

A new component for the Vanguart Black Hole Tourbillon: the “joystick”

One newly developed component on the Black Hole Tourbillon is the “joystick,” a world first with patent pending. The joystick takes the place of the usual watch crown; turning it 60 degrees allows the wearer to move the time forward and backward. And when it moves backward, it is really counting the time down. 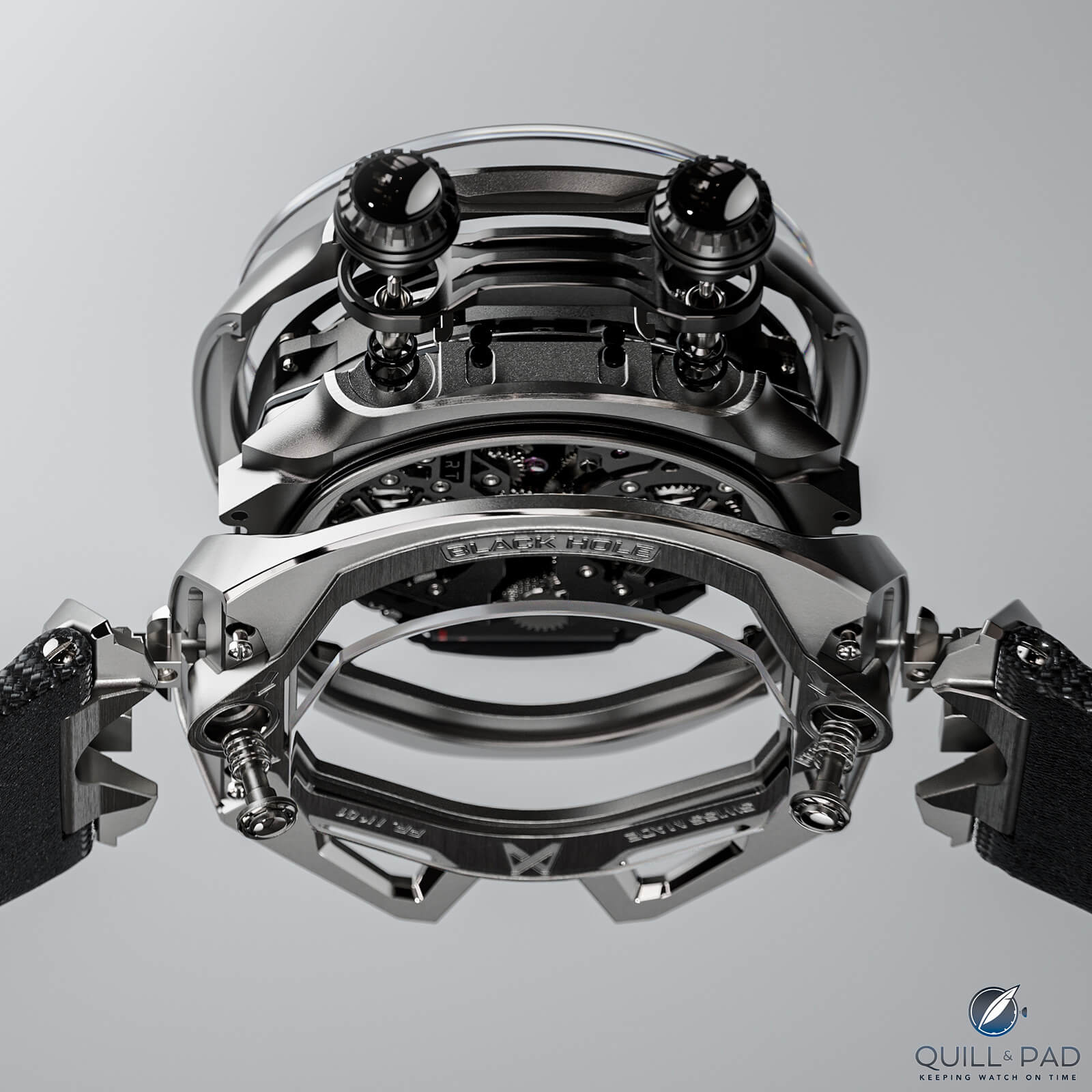 The Vanguart Black Hole Tourbillon viewed in explosion: the crowns operate as a joystick

The joystick is set to become one of the main characteristics of Vanguart watches, which is a great thing because I found that playing with it enhanced my enjoyment of the mesmerizing watch. I’m sure every owner will feel the same way about the playful component. 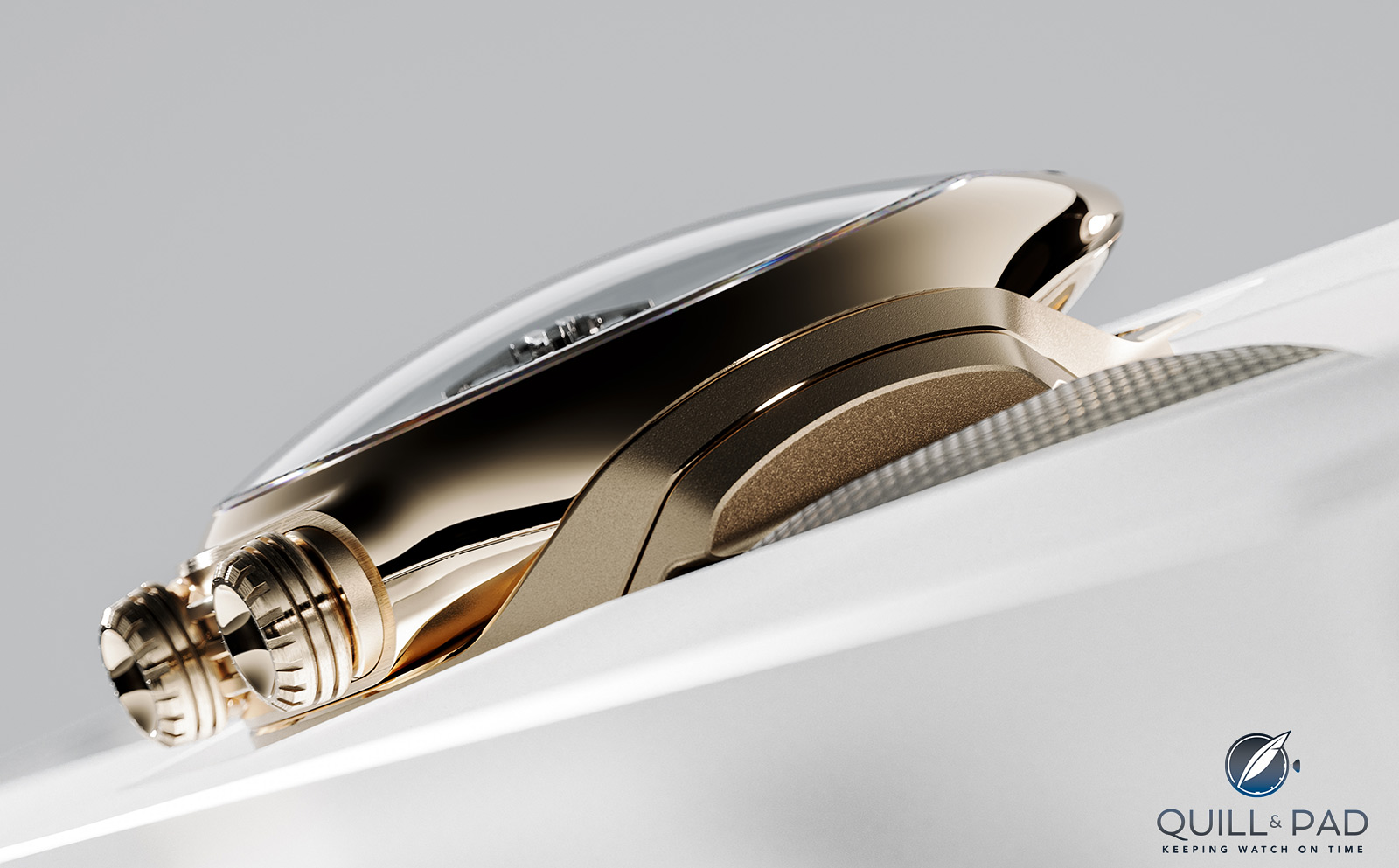 The tactile case is very pleasing to both the eye and the touch. And one thing that might not be immediately apparent is that the screws, pins, and rivets holding the case together are entirely hidden. Only the sensual metal curves are visible.

This assembly style allows for an integrated strap and a quick-change mechanism using a button, all without visible screws. Metal, leather, and rubber bands are all available. “It looks very simple, very clean,” Leuenberger reiterated.

While on paper the size of the watch seemed very large, it sits comfortably on the wrist. I thought it too large before I had the opportunity to try it on, but now I’m of a different opinion.

And despite all the complexity and moving parts on the dial, it is easy to read the time at a glance. 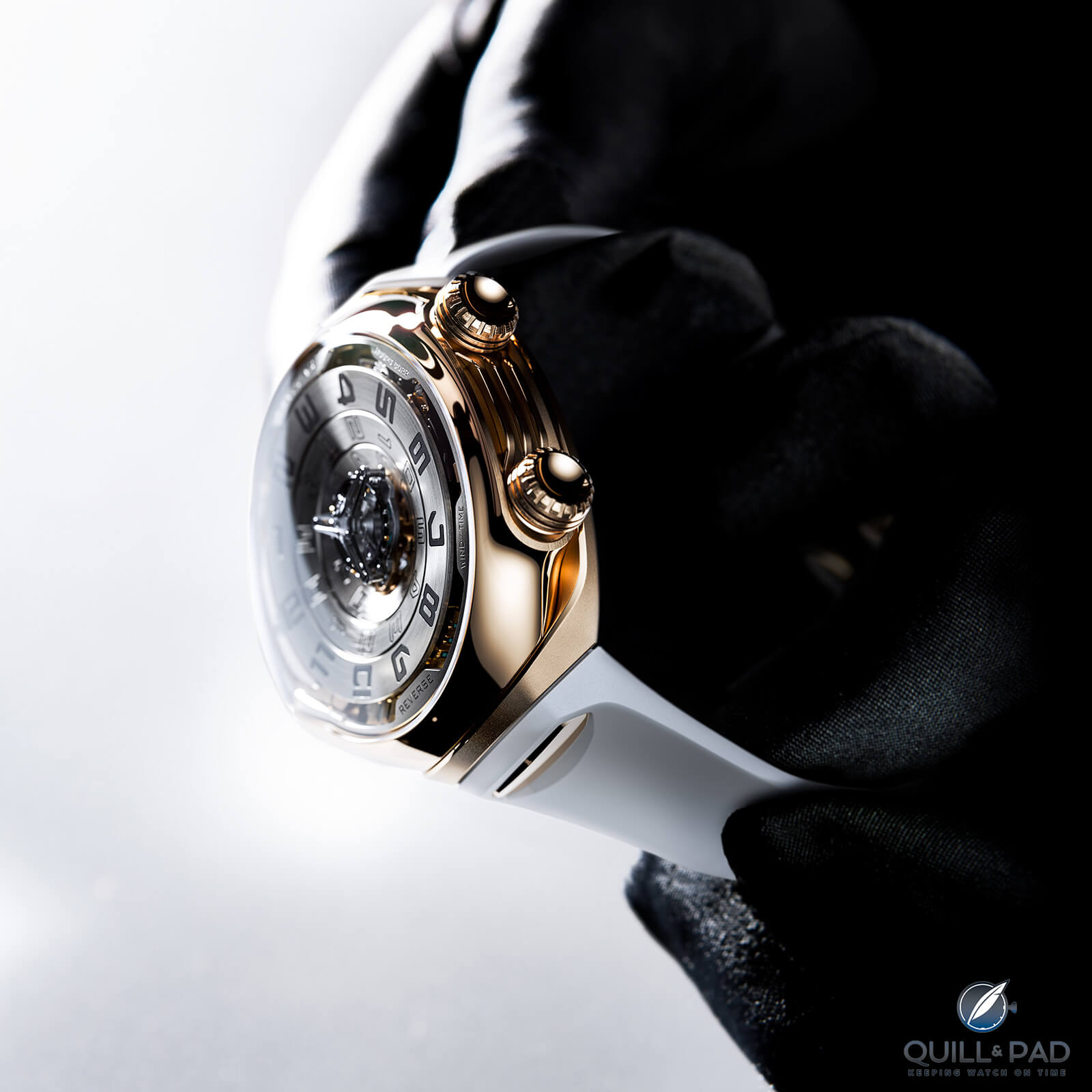 Who is behind Vanguart?

The Black Hole Tourbillon was ready in 2020, but the COVID-19 pandemic made it nigh impossible to launch a new brand and watch at that time, so Vanguart patiently waited for the right time. “Pushing it has been tough,” said Leuenberger, who was excited to show his project to the world.

Leuenberger is one of four co-founders. His previous experience includes assisting Giulio Papi in R&D, where he worked to develop products for Richard Mille, HYT, and Chanel among others.

The idea of the “horological black hole” originated with creative director Thierry Fischer in 2011, long before Vanguart was a twinkle in anyone’s eye. “It was a very old project of mine,” Fischer explained to me. “I began it at a time when I knew nothing about horology at all.”

“I had actually seen Thierry’s video before we ever met,” Leuenberger explained. “Realizing ‘the Black Hole’ involved a lot of complicated mathematics.” The result is more than impressive.

Fischer was previously senior watch designer and head of CGI at Etude de Style, a Swiss design and consulting agency, where he worked on and was a key artist for projects for Audemars Piguet, HYT, Fabergé, and Christophe Claret.

Jérémy Freléchox, CTO, was a mechanical movement designer at APRP for 15 years and before that with Girard-Perregaux for six years. He has mastered the most complicated watchmaking has to offer, including minute repeaters, tourbillons, and perpetual calendars.

Finally, I come to co-founder and president Mehmet Koruturk, who was “working for a private equity company that owned an F1 team. Through one of our sponsors, I discovered the watchmaking world and was introduced to Axel Leuenberger and Jérémy Freléchox, who were working at Audemars Piguet Renaud et Papi (APRP), through a common friend, the CEO of an independent brand.”

Koruturk had worked in finance for nearly a decade before co-founding Vanguart. “Axel and Jérémy had worked behind the scenes on some of the best watches of the past decade, had great ideas, and wanted to create their own brand together with Thierry Fischer. And that’s how we decided to join forces in 2017.”

This group of fresh faces with big aspirations and tons of creativity and talent has now been joined by NBA basketball player James Harden – yes, that James Harden – as a shareholder in addition to brand ambassador.

“A watch makes a statement. Partnering with Vanguart is an opportunity to infuse creativity and culture into a classic fashion accessory to make a statement that is authentic to me,” Harden said of the partnership.

“We are set on designing and producing the highest level of haute horology and we couldn’t find a better partner than James to represent Vanguart,” said Koruturk. “Not only is he one of the most respected and recognizable athletes of our time, but James also brings a unique perspective on style and culture.” 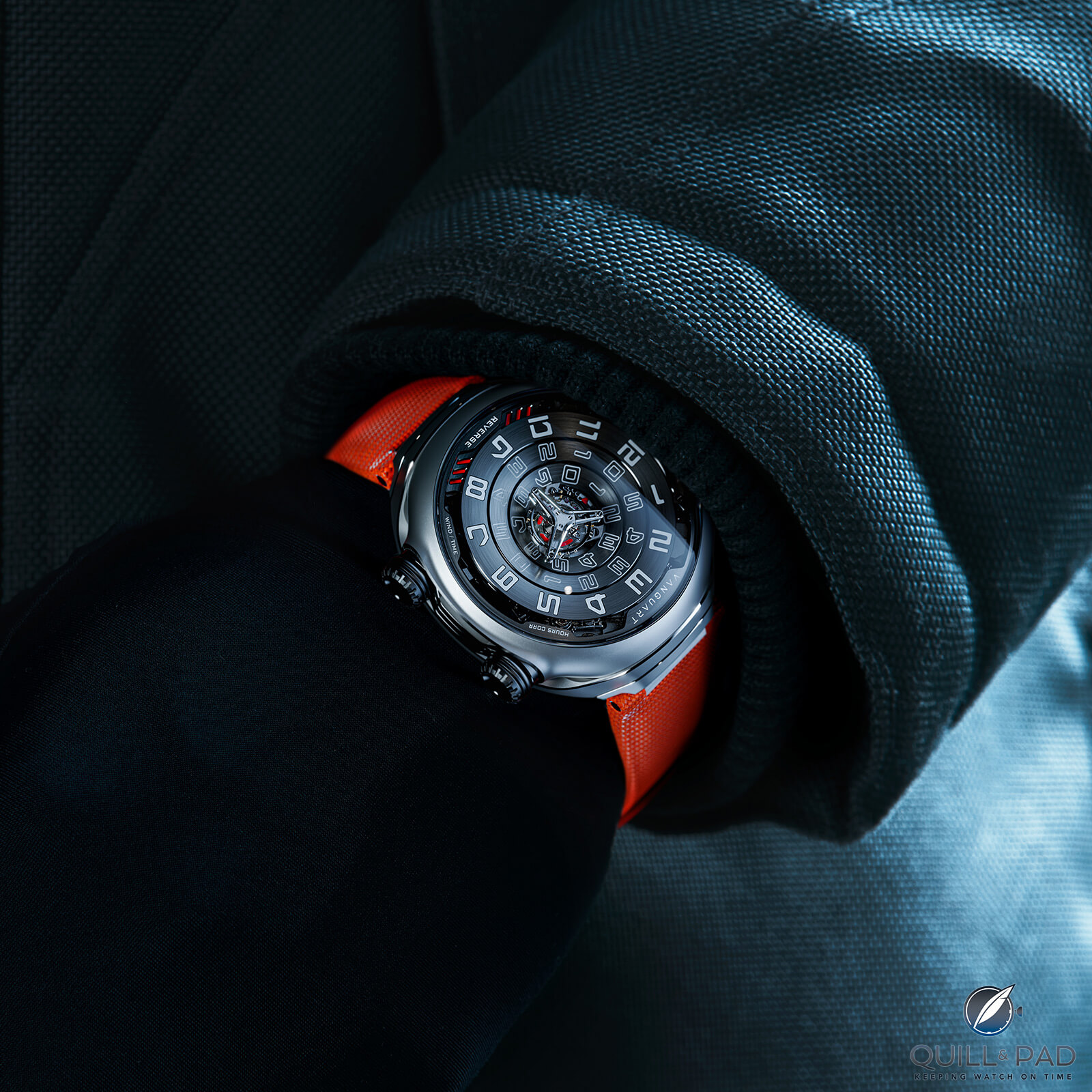 While Vanguart timepieces are planned for the future that feature Harden’s own creativity, certainly right now the young company can and should be celebrating the triumphant piece of haute horlogerie that is the Black Hole Tourbillon.

* This article was first published on September 18, 2021 at Vanguart Black Hole Tourbillon: Featuring A Flying Tourbillon Orbited By ‘Vortex’ Display Disks And A Joystick Controlling Time

A Brief History Of Transportation Ending With The Romain Jerome Spacecraft

The Retrograde: One Of My Favorite Complications

Watches And Wonders 2022 Panel On Sustainable Innovations: Interesting Information On The Most Important Subject In Today’s Luxury Industry (Video)