Victor & Charles Karma Champagne: Sensational Taste, But The Jury Is Out On The Diamond

One of the great joys of this column, for me at least, is that there is always something new and exciting popping up. Usually, it will come to naught – there is a reason that the great wines and spirits of the world are recognized as such – but every so often, we have a surprise.

So when I was contacted from Belgium about a new, diamond-encrusted champagne, I was more than a little intrigued. Surely, this had to be someone having a little fun or, at the very least, a gimmick designed to get people to part with large sums of cash for what would inevitably be buyer’s remorse. We went back and forth a bit and it soon became clear that this was not some dodgy Flash Harry scheme.

One thing that is crucial with this column is that we always make certain that we do our own tasting. You’d be staggered how often I see supposed tasting notes – for wines, spirits, champagnes, cigars and so on – which are identical to the producer’s press release. I don’t see the point. But I could see that tasting this champagne might be a stumbling block. There was not a single bottle Down Under and I really didn’t see anyone sending me a bottle from Belgium, especially with a diamond included. As I said, every day brings surprises.

For a tasting note, it was obvious that I really didn’t need the diamond – I’m still trying to work out what one does with a diamond attached to a bottle anyway. And so, all the way from Belgium it came. That was when I knew these guys really were serious. 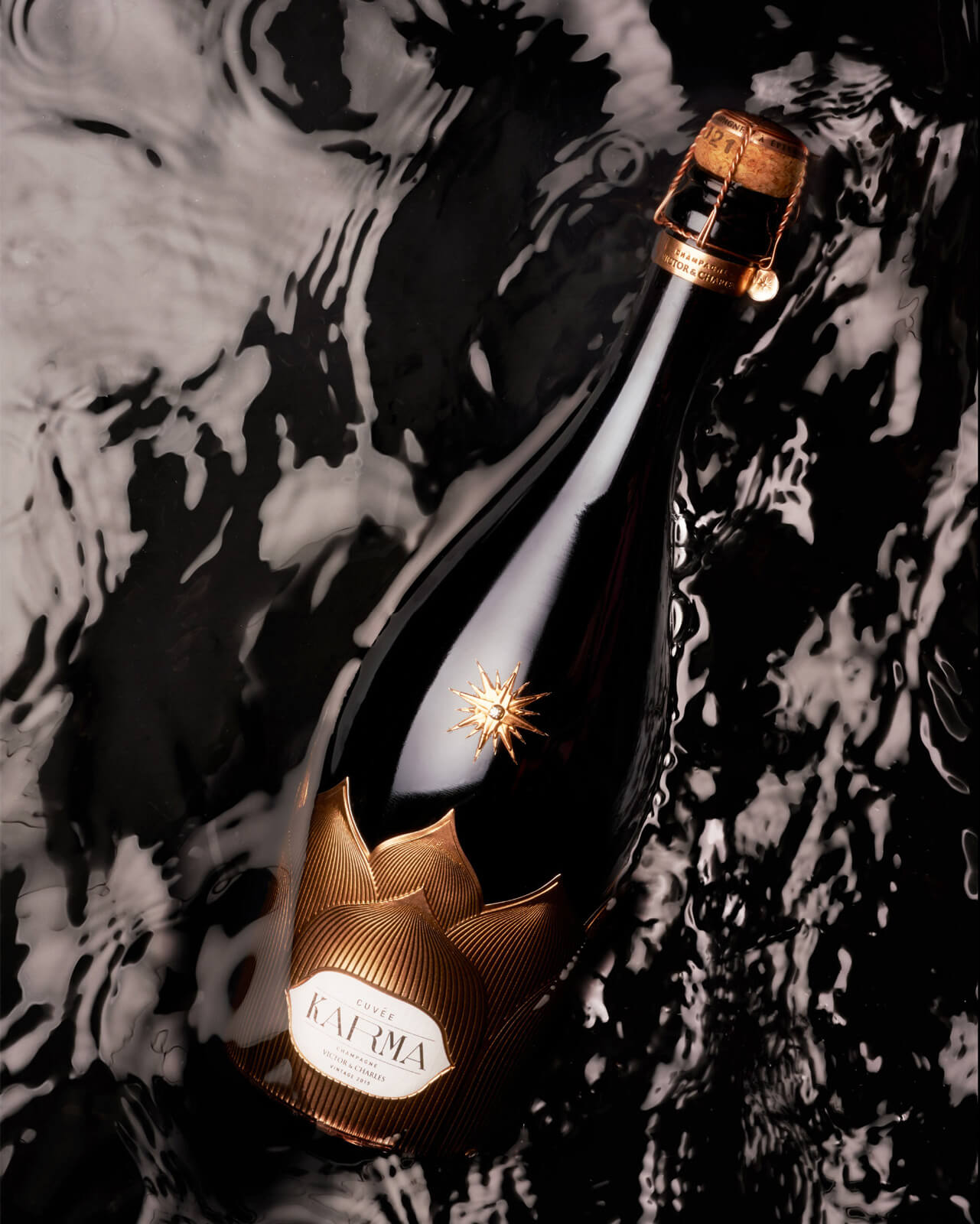 One does not wish to judge a book by its cover, as they say, or a champagne by the bottle, but if one did, the Victor & Charles Karma is off to a flying start. The presentation is exquisite.

But first, a little about the producer. Quite how it all fits together is a little obscure (Belgium may have simply be the head office as obviously Belgian Champagne is as much of a real thing as magic beans and honest politicians), but Victor & Charles is the creation of Filip Mertens. Mertens, who is based in Antwerp – thereby answering the Belgian connection and the link to diamonds (Antwerp is the diamond capital of the world with “84% of the world’s rough diamonds and 50% of cut diamonds passing through”) – wanted to create a champagne brand in honour of his father, Victor, and grandfather, Charles. Mertens has spent many years in wine industry sales, but also five years working for the champagne giant, Vranken Pommery. He also spent time with Champagne Lallier. Mertens has also worked as a sommelier, owns a wine store in Antwerp, and is the manager of the Bubble Company.

The provided information discusses Victor & Charles having vineyards in a number of quality regions in Champagne. Whether they own these, or what seems more likely, have contracts with growers, is not specified. Nor is it clear where the champagnes are made (this is much less of a big deal than it might sound – it is common with many champagnes and is perfectly legal and acceptable). 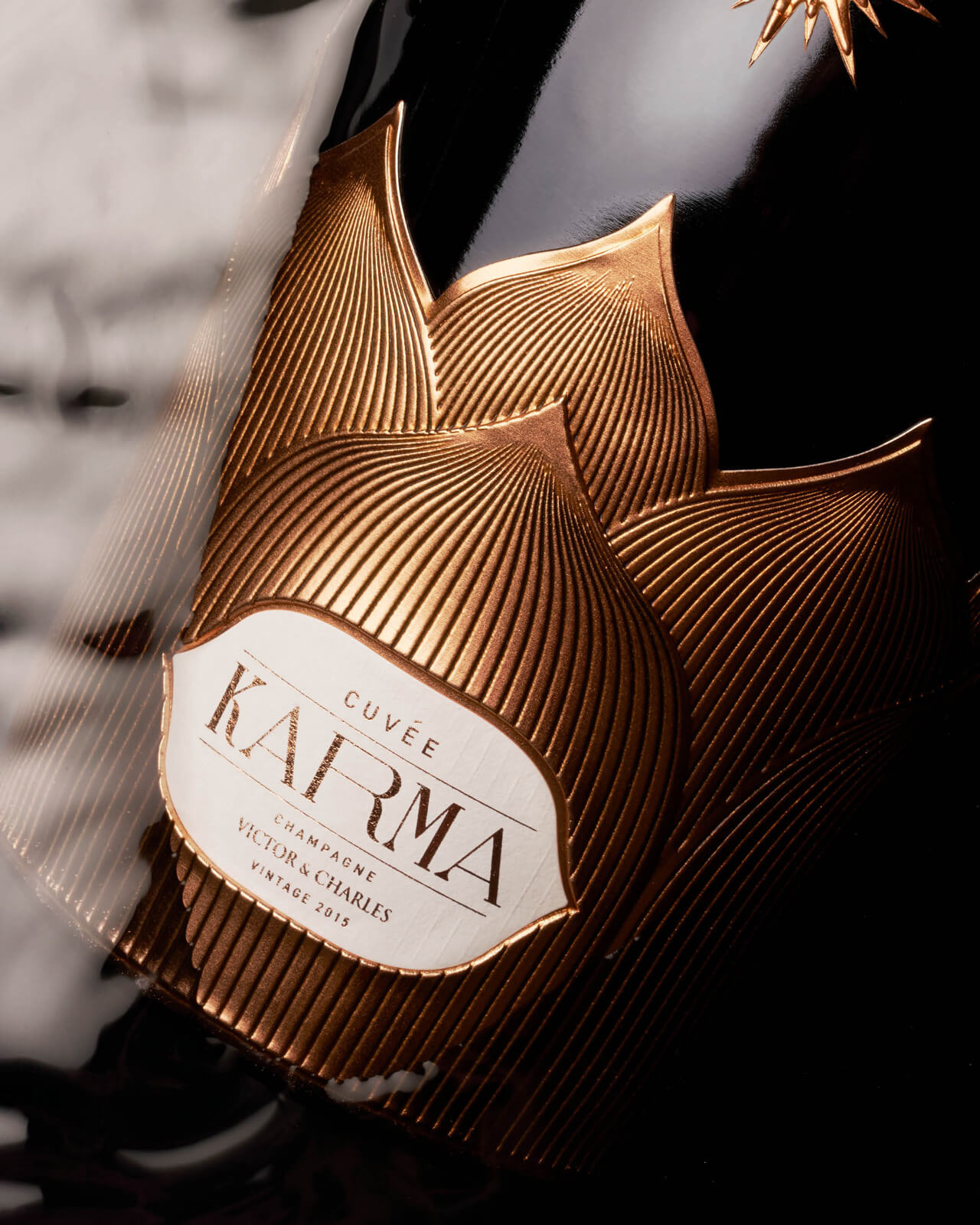 A little poking around the internet revealed that Mertens has previously said that he “partnered with a French family that was already producing good quality champagne. I could build on that and we started refining it together”. It also revealed the chef de caves (the winemaker) to be Paul Censier, chef du caves at Coopérative des vignerons d’Hautvillers, which may be a little more than merely a French family. Again, it hardly matters.

The vineyards accessed are from the crus of Damery, Grauves, Mancy and Hautvillers. Of these, Grauves and Hautvilliers are Premier cru vineyards and would be considered the pick. Grauves has provided fruit for some very exciting champagnes over the years and Hautvilliers was home to the famous monk, Dom Perignon. 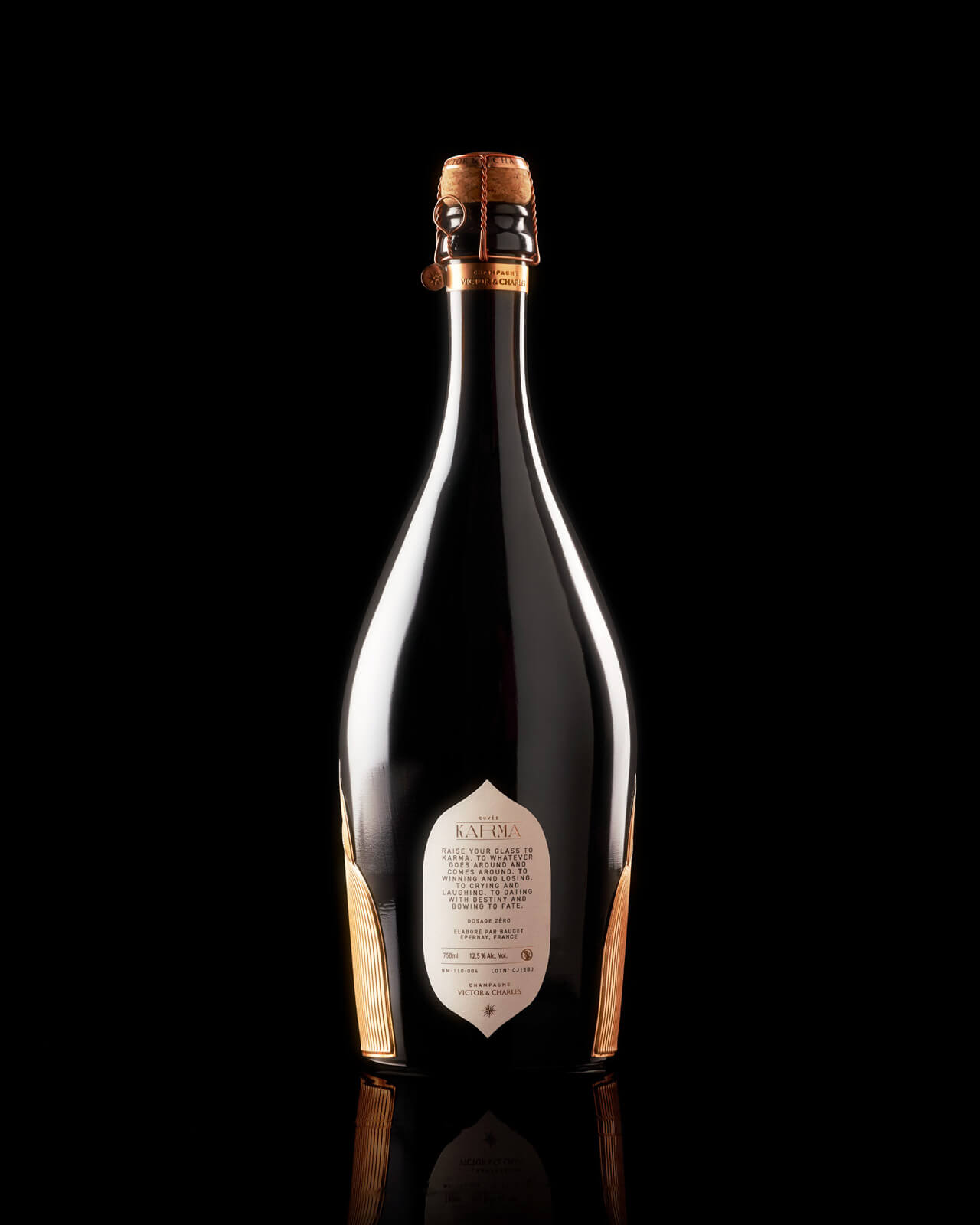 The makers do incorporate oak barrels as part of the vinification program. Karma champagne is described as Zero Dosage, which trendy these days. The team specifies that this means less than three grams/litre sugar. So technically not zero, and there is some debate about the use of such a term, but it is often used interchangeably with ‘brut nature’ and legally, that is a dosage under three grams/litre. Again, this may seem more of a drama than it is –I find that almost all truly zero dosage champagnes lack generosity and exhibit a hard edge. A tiny dosage can make all the difference. It just happens that the term, ‘zero dosage’, is the love child of marketing teams at the moment, and Karma is a champagne that has not neglected marketing.

Their Karma is the flagship of the range, but it is not Victor & Charles only champagne. ‘Le Brut’ is a blend of 60% Chardonnay, 30% Pinot Noir and 10% Meunier, which has seen 42 months on lees. ‘Le Rose’ is 55% Chardonnay, 25% Pinot Noir and 20% Meunier, which enjoyed three years on lees. The Blanc de Blanc, from the 2015 vintage, had five years on lees. Total production of all champagnes annually is just 36,000 bottles, which includes the 1,000 bottles of Karma. To put that in perspective, Moet et Chandon make an estimated 76,000 bottles every day, twice Victor & Charles’ annual output! 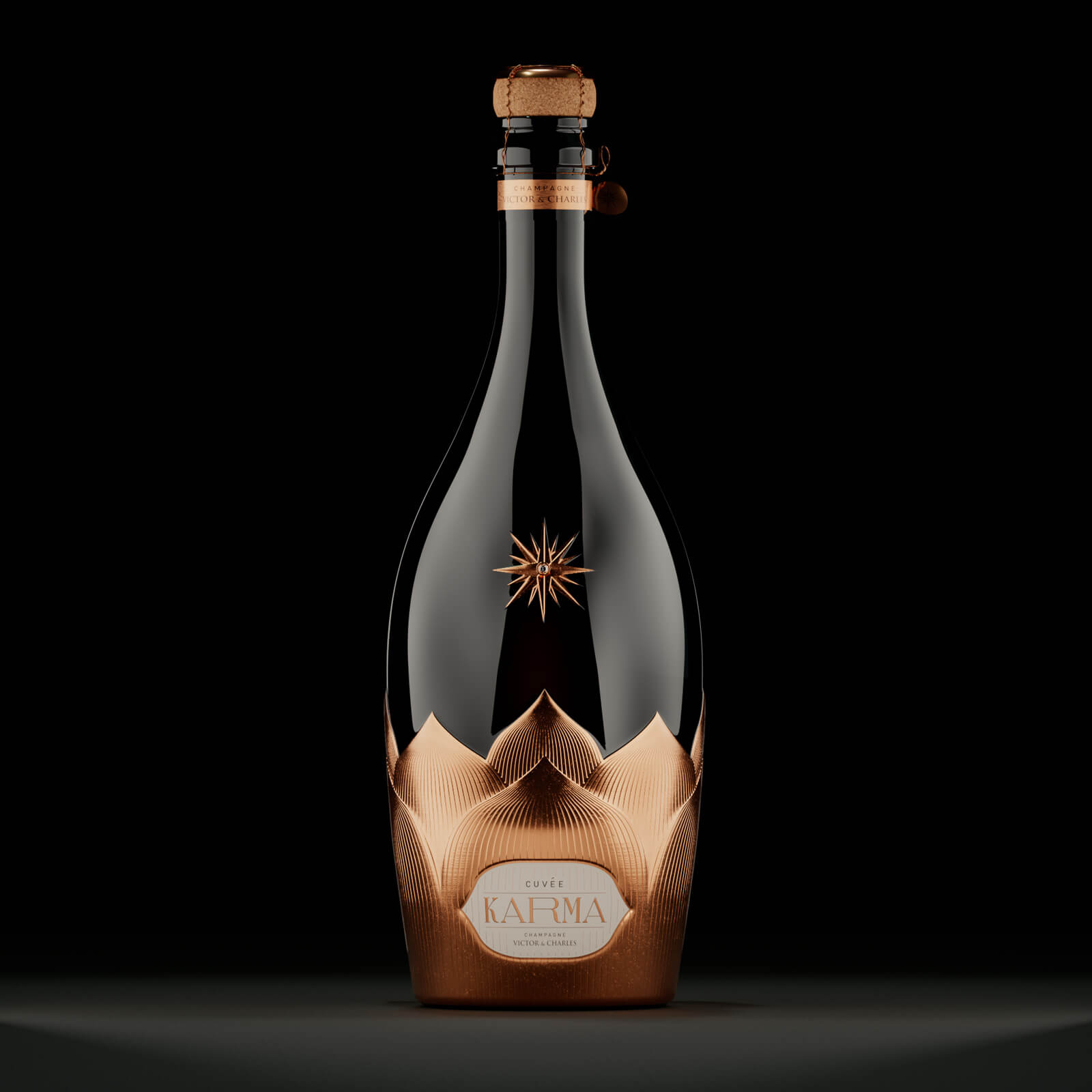 The first release, and the bottle I sampled, was from the 2015 vintage. They have also released the 2016 and both are effectively sold out (personally, I was very pleased they sent the 2015, as I have always preferred champagnes from that year to those from 2016). Future vintages are in the works.

Production of Karma is extremely limited, no more than 1,000 bottles. The wine is a blend of 60% Chardonnay, 30% Pinot Noir and 10% Meunier. As mentioned, dosage is below three grams/litre. It has around five years on lees. The 2016 was priced, diamond included, at €575. This includes delivery around the world. The initial release of the 2015 was €495. The blend was a split of 50/50 Chardonnay and Pinot Noir (although as we so often see, reports do vary and there may have also been some Meunier – it matters little).

Mertens has acknowledged the importance of the contents, but he has made no secret that the aim was to produce the most beautiful bottle of champagne in the world. Of course, beauty is in the eye…, and one friend took one look and declared it hideous. Personally, I think Mertens might well have achieved his objective. For me, diamond or not, the presentation is perhaps slightly ornate but exquisitely elegant. I love it. Another friend was so entranced by the bottle that he begged me for the empty. Just shows that you can’t make everyone happy all the time. 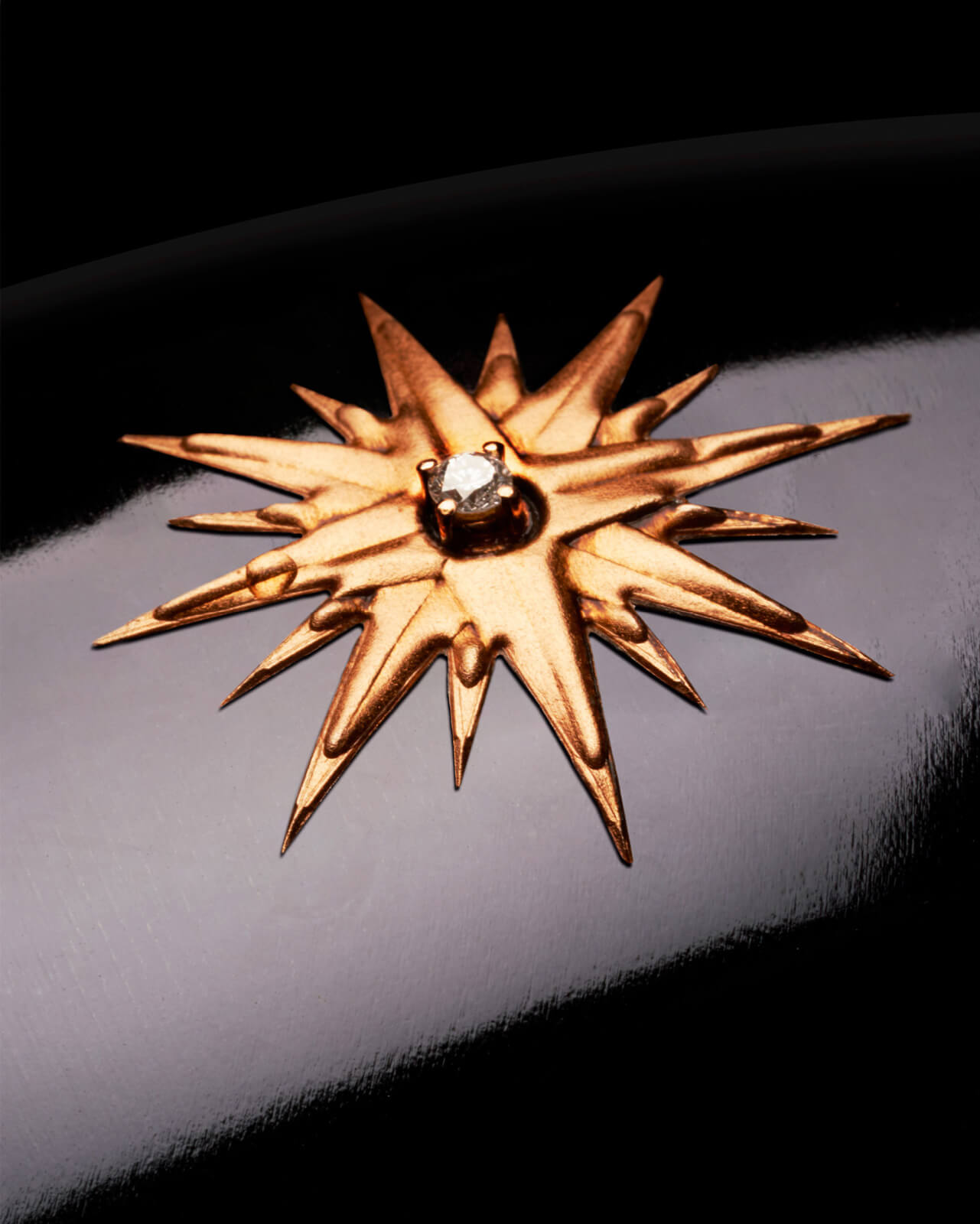 The diamond on the emblem of the Victor & Charles Karma champagne

The diamond? Still trying to understand the point of that, but I suspect that others will understand. Either way, it has certainly done well in marketing/presentation awards. By the way, the diamond comes with its own certificate of authentication from an organization called the High Council of Diamonds (HRD). As well as the diamond, the bottle is decorated with rose-gold pewter.

The aim is to supply top European and American restaurants, but the champagnes are also available for individual purchase at www.victorandcharles.com.

What makes me marginally uncomfortable about this champagne is that so much of it is about presentation, marketing and image. For me, the contents are far more important. But fortunately, the contents certainly attained the high standards that goes with the presentation. 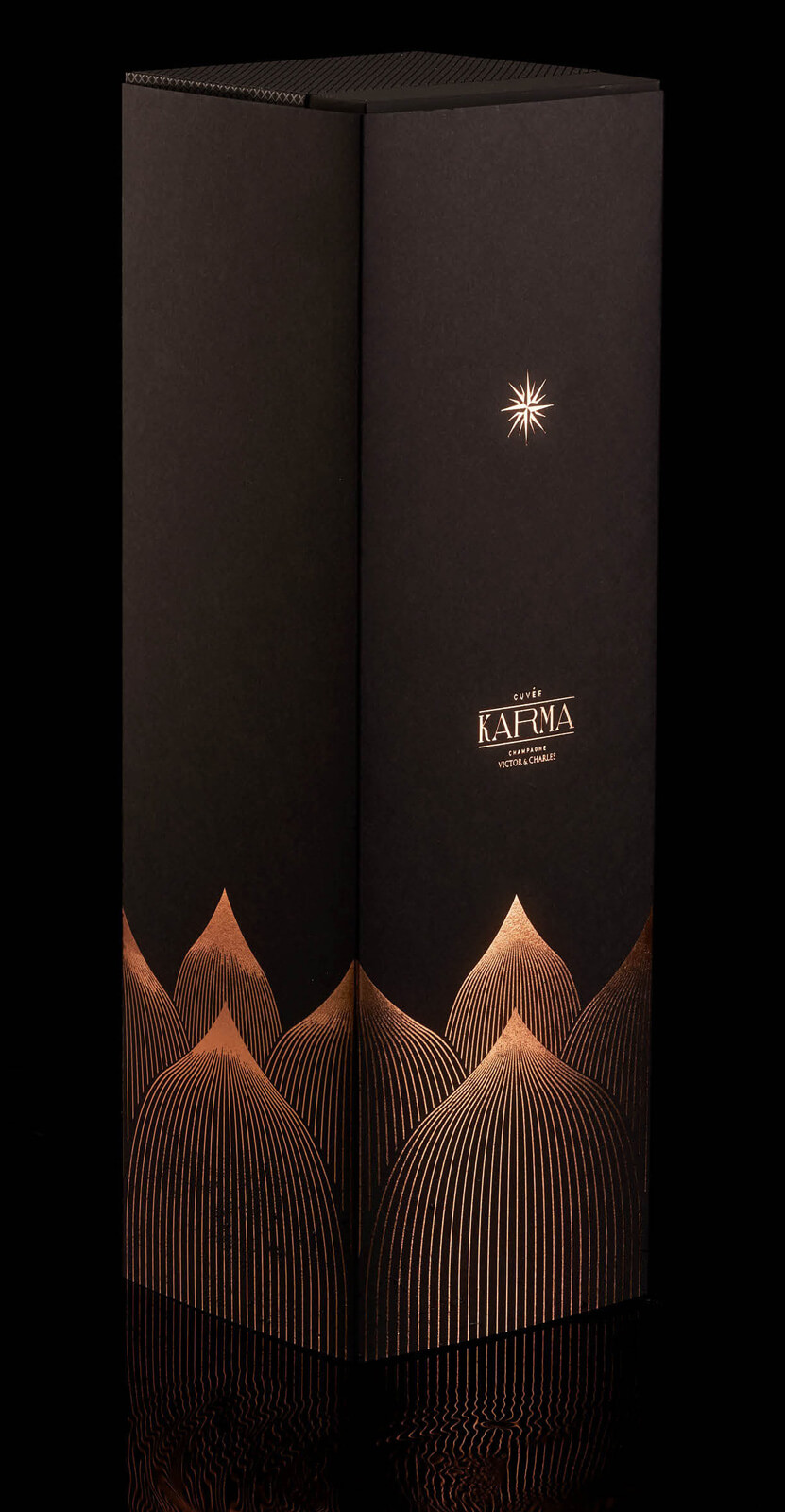 Normally, all wines and champagnes are assessed on the tasting bench, in solitude. It really seemed that opening this bottle, even with the opportunity to finish it later that day by myself, needed more. So I brought it to an annual lunch with some wine-freak friends, to celebrate the end of year. I made certain I was there well before anyone else so I could assess it properly and then later share it.

By chance, the lunch had several wines that we have featured in Quill & Pad previously – Salon (that glorious 1996), Perrier-Jouet Belle Epoque, Domaine de la Romanee-Conti (the Richebourg), the 1971 Biondi Santi Riserva (my other contribution for the day and a bottle for which I had such high hopes, but sadly, it was all a bit tired and unexciting – at least it was more impressive than a 1945 Latour which needed the last rites more than decanting) and the 2001 Yquem, as well as a few other gems.

The 2015 Karma was a pale lemony colour. The nose opened a little broadly, but with ripe, rich notes of toasty spices, lemons and stonefruit. It did seem that there was some oak influence, though not in the sense of being oaky. It is certainly bone dry but overall, well-balanced. Hints of strawberries emerged on the palate. Decent length, the wine will certainly cellar well for a number of years. It reminded me a little of an old-fashioned Bolly. For me, 94. 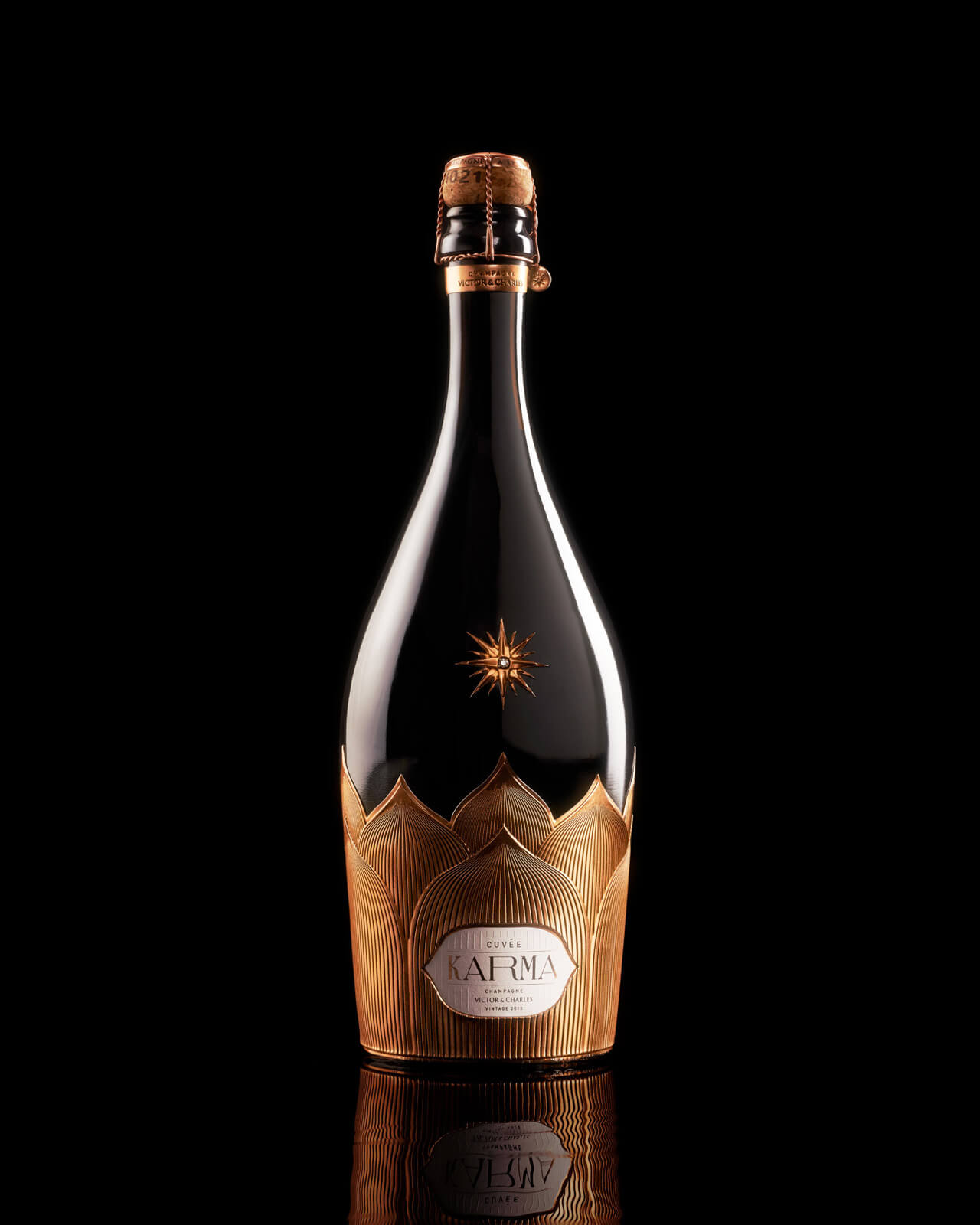 The Victor & Charles Karma is undoubtedly an interesting addition to the champagne firmament and is certainly a magnificently presented one. As to its future, as long as the team maintains the quality, we should see many more vintages.

And if anyone finds a practical purpose for the diamond, please let me know.

The Joy Of Champagne: Tasting Through Different Styles From Dom Pérignon And Others At A Champagne Extravaganza Lunch

Champagne And Caviar: A Great Culinary Combination Or Just One Excess On Top Of Another?