I had been looking forward to visiting anOrdain for years. My planned visits kept getting canceled by various illnesses and COVID-19-related travel restrictions. And when I finally made it to Glasgow, Scotland in May 2022 after more than two years of planning and re-planning, as luck would have it anOrdain founder Lewis Heath had been stricken with the modern plague.

No matter: his equally charming and knowledgeable right-hand man Erlend Firth was on the scene to give me the full tour of anOrdain’s workshop in the light and airy top floor of the old Templeton Carpet Factory, a Victorian building in Glasgow’s East End. 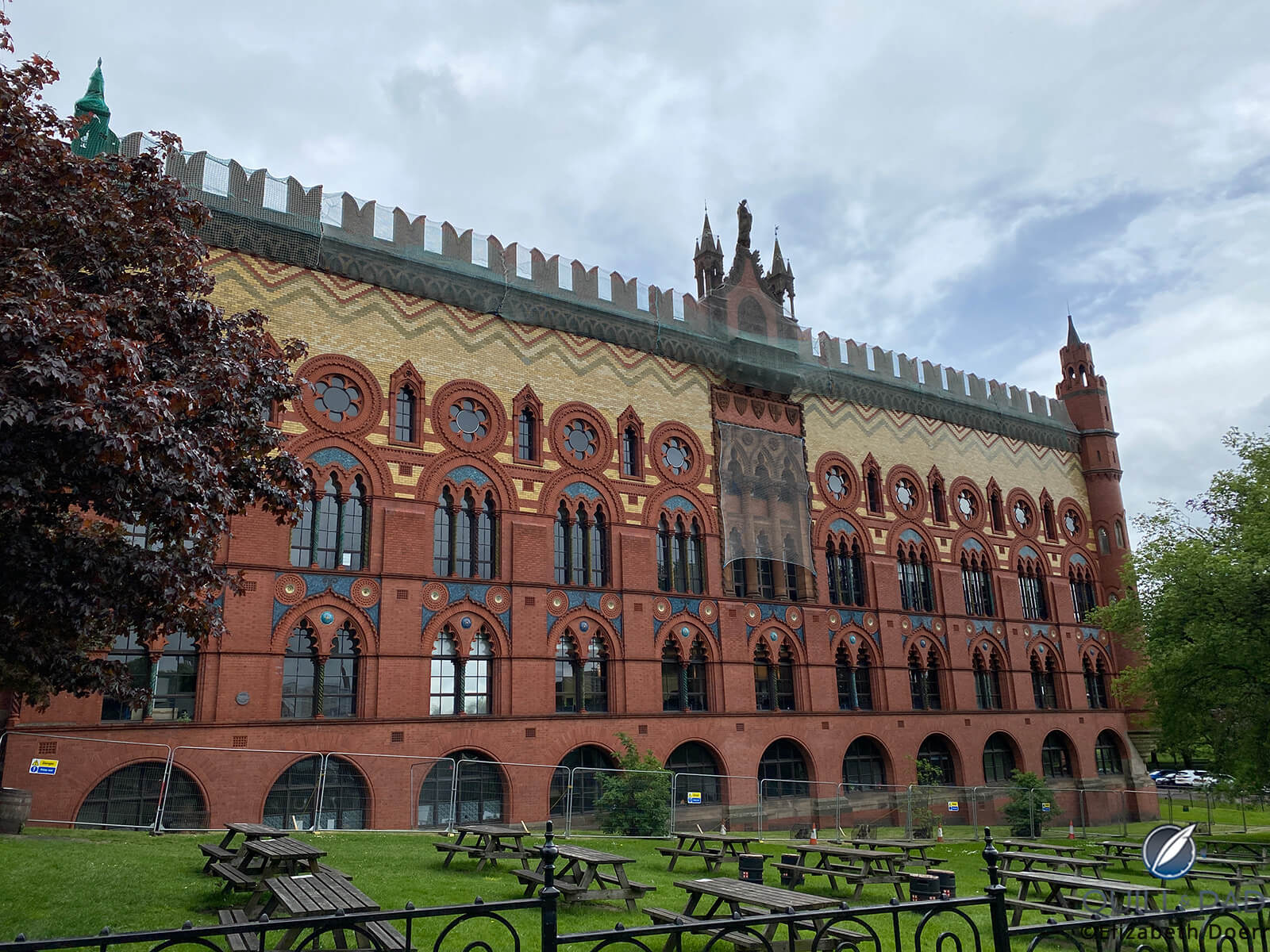 Most people know anOrdain because of its stunning handmade enamel dials. My own hands-on experience occurred because my interest was piqued by the nature of these tiny made-in-Glasgow works of art.

“The fascination for us, and the reason for creating a new watch brand, was the idea of mixing modern design with traditional grand feu enamel. Most of the team are only a few years out of art college and are very passionate about their respective disciplines, but aren’t traditional watch enthusiasts, so it’s proving very interesting,” said Heath, the architect and product designer who founded the company in 2015, as we met to talk about what was then his startup back in 2018. 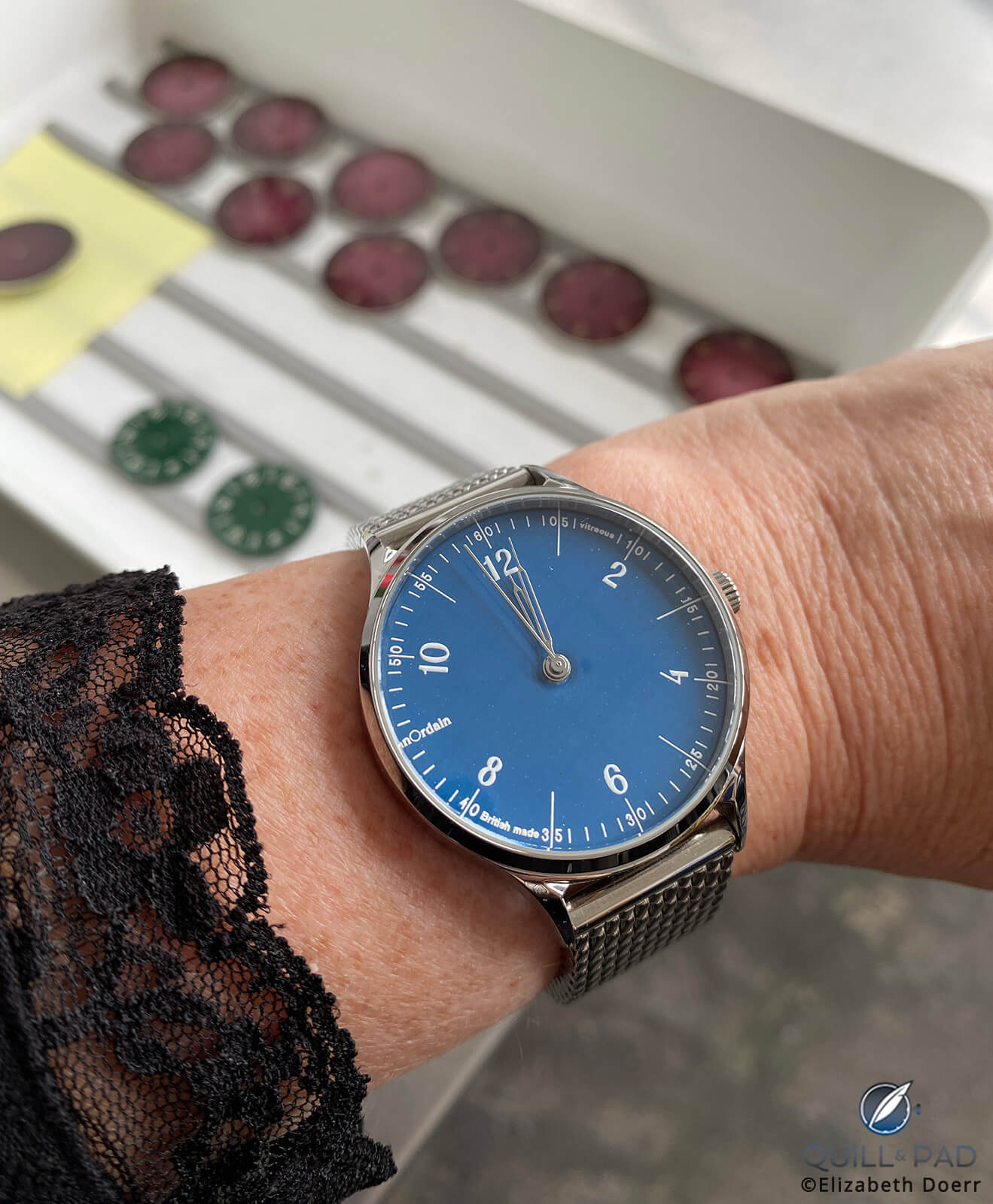 AnOrdain has now progressed far from the status of startup, and the team has enjoyed great growth in the four years since I met Heath, now boasting 18 full-time employees. This full-fledged brand has carved itself a permanent place in the world of watches with a reputation for interesting timepieces with decorative dials at a reasonable price.

Dials, enamel, and the ever-present fumé

Not only the dials themselves have evolved: if you look closely, you might notice that the entire design of anOrdain’s watches has progressed ever so lightly. The Swiss made cases were nice at the beginning, but not special. Now they are more solid than ever, with the tweaked design hitting a sweet spot in three sizes. 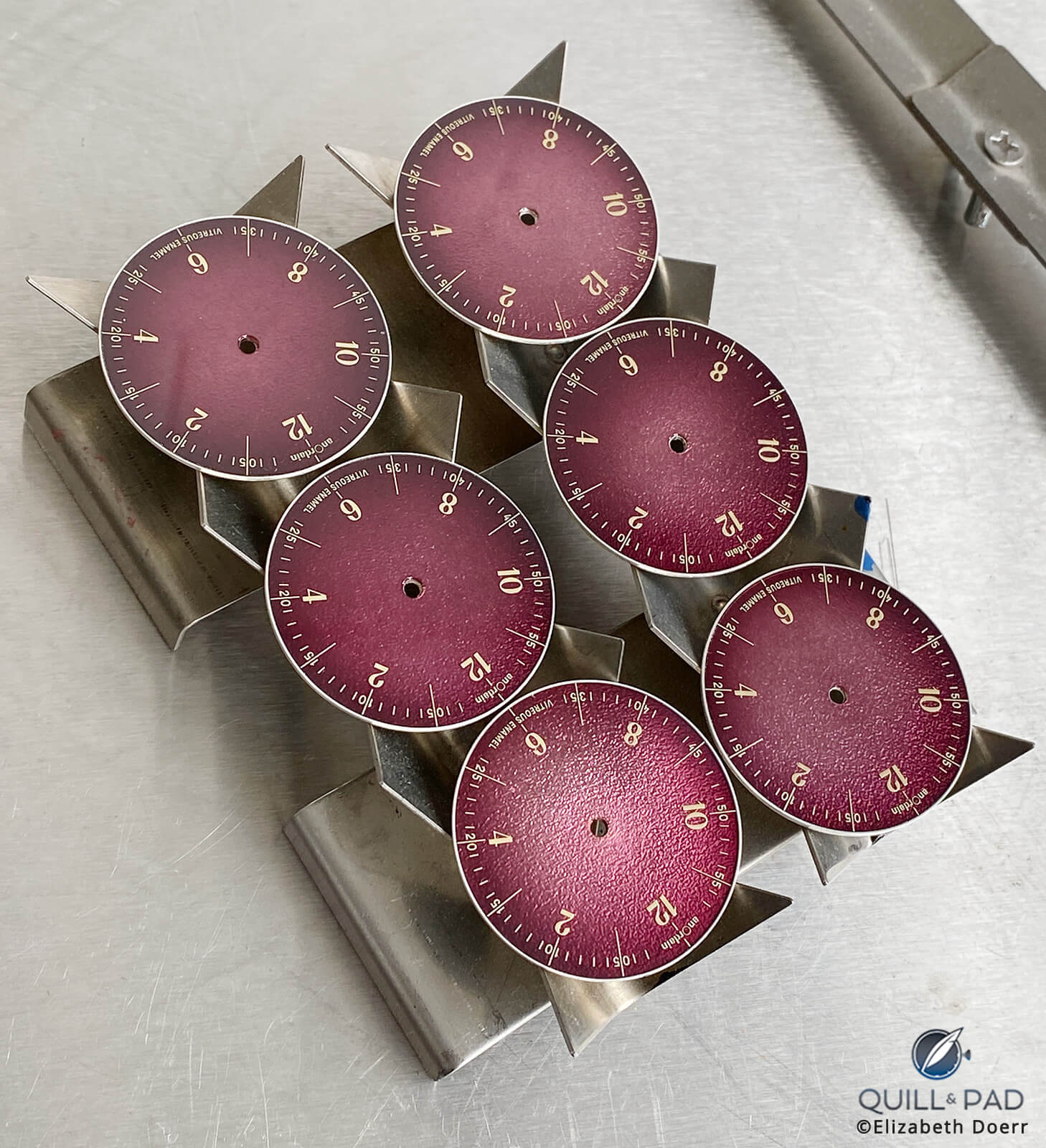 But it’s the dials that everyone looks at when it comes to anOrdain. And that is what I spent most of my visit to the workshop learning about.

Since my 2018 review, anOrdain has evolved mainly by introducing its artistic rendition of the fumé dial, whose exact manufacture is a “trade secret” according to Firth, but which I know came about through experimentation with hammering a silver dial blank in an unusual way and then applying enamel. 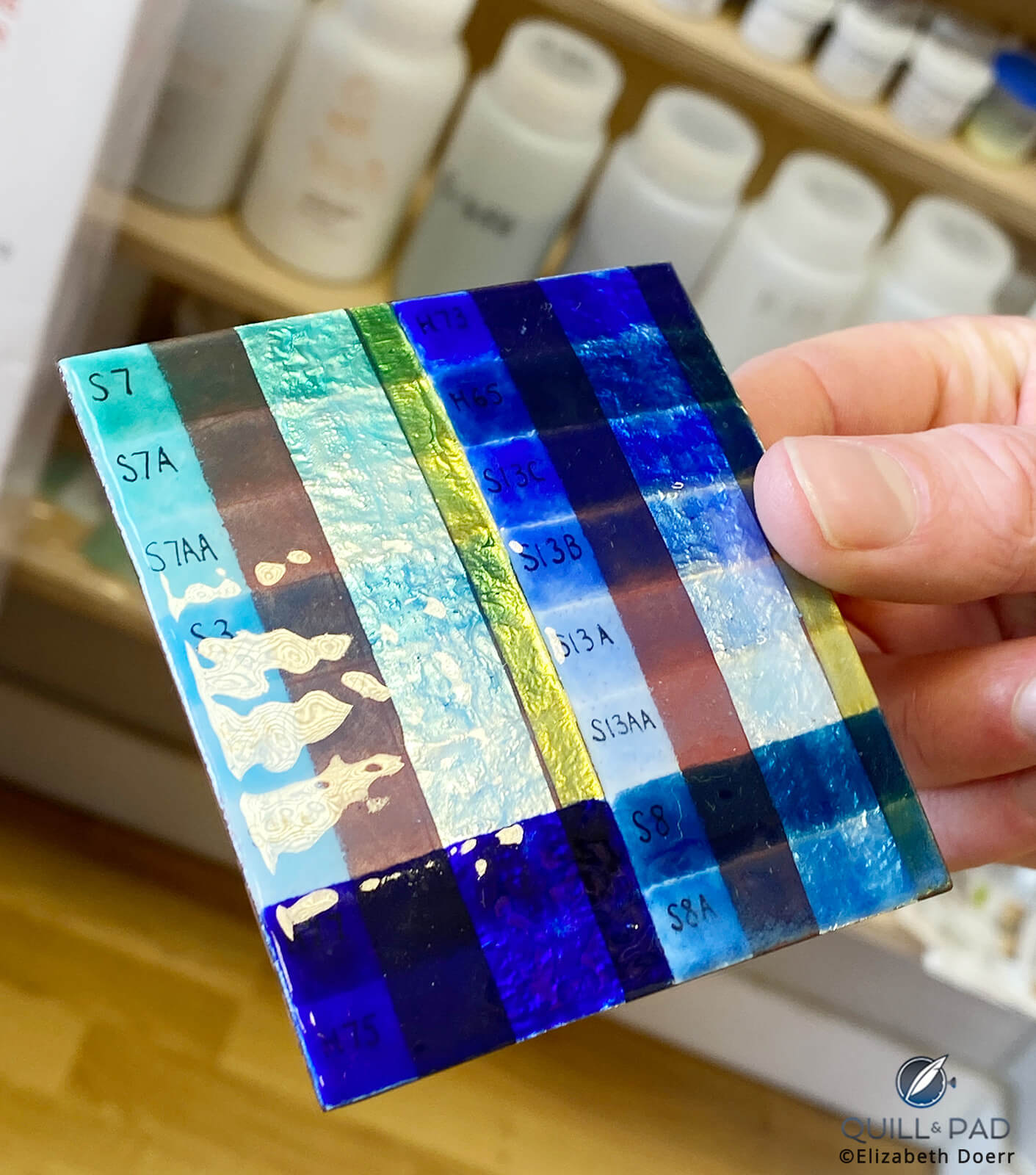 Blue enamel palette at the anOrdain studio in Glasgow

The fumé dials – very likely the first of their kind in this material – have been wildly popular, even if the watches featuring them are more expensive than those without. Their popularity has led to a backlog of orders at anOrdain, who is attempting to alleviate it by manufacturing in batches.

The charming 2021 anOrdain Model 1 Payne’s Grey Fumé is one of these beautiful Fumé watches: it became so popular that it got voted through to the finals of the 2021 Grand Prix d’Horlogerie de Genève in the Challenge category. 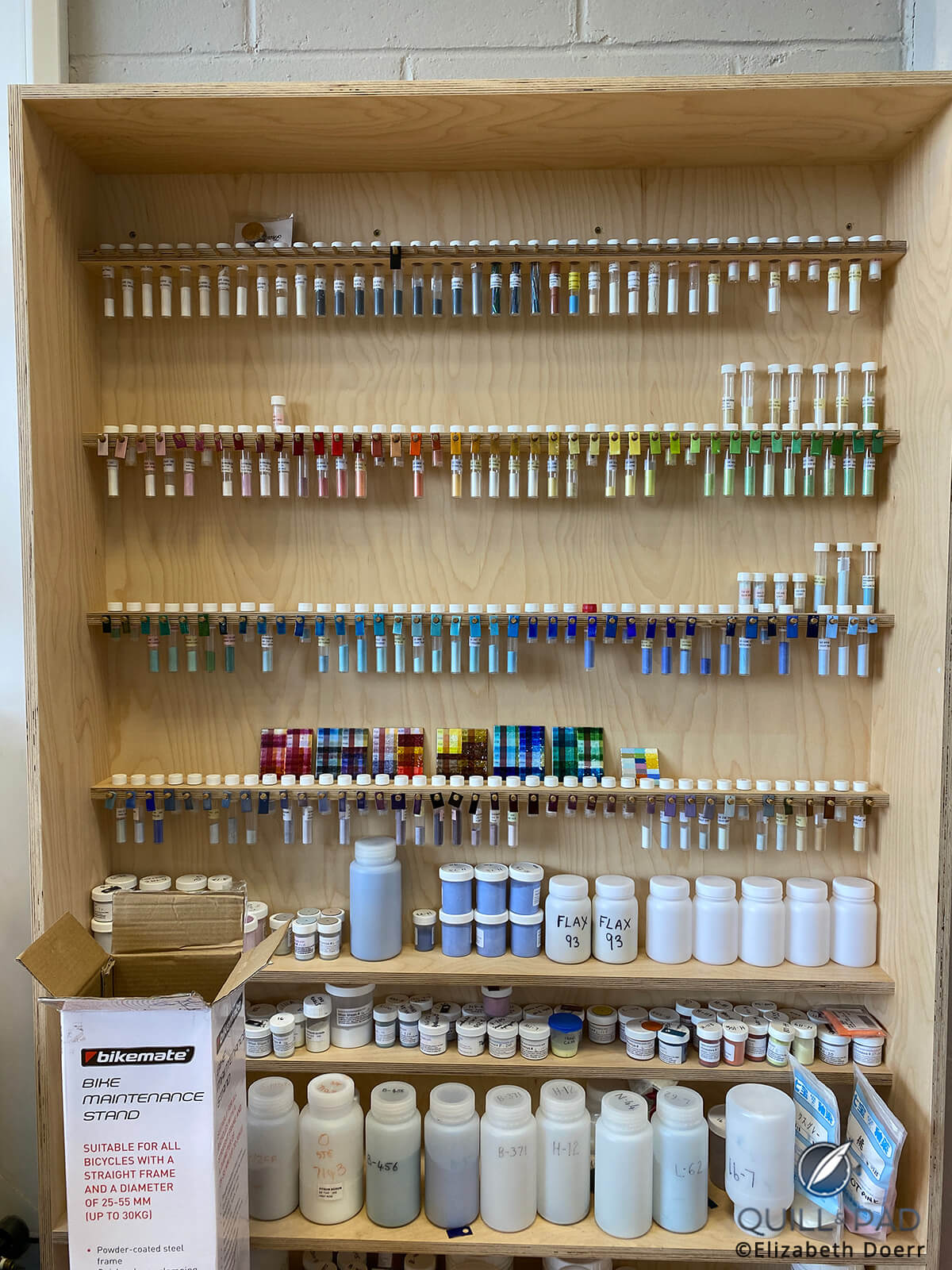 The Fumé dials are now available in four colors on the Model 1, and now having seen all of them in the metal I think I might be hard-pressed to pick a favorite. They are all unique.

Demand is unquestionably high, and so anOrdain now employs five young enamelers, who share the spacious rooms in the industrial building that anOrdain occupies. The fledgling company’s jeweler and silversmith, Adam Henderson, the “architect” of the anOrdain enamel so to speak, has departed to return to university for a master’s degree. Henderson laid the foundations for the anOrdain process, which the five young enamelers faithfully reproduce by hand. Collectively, they have master’s degrees in arts, glass, jewelry, and silversmithing. 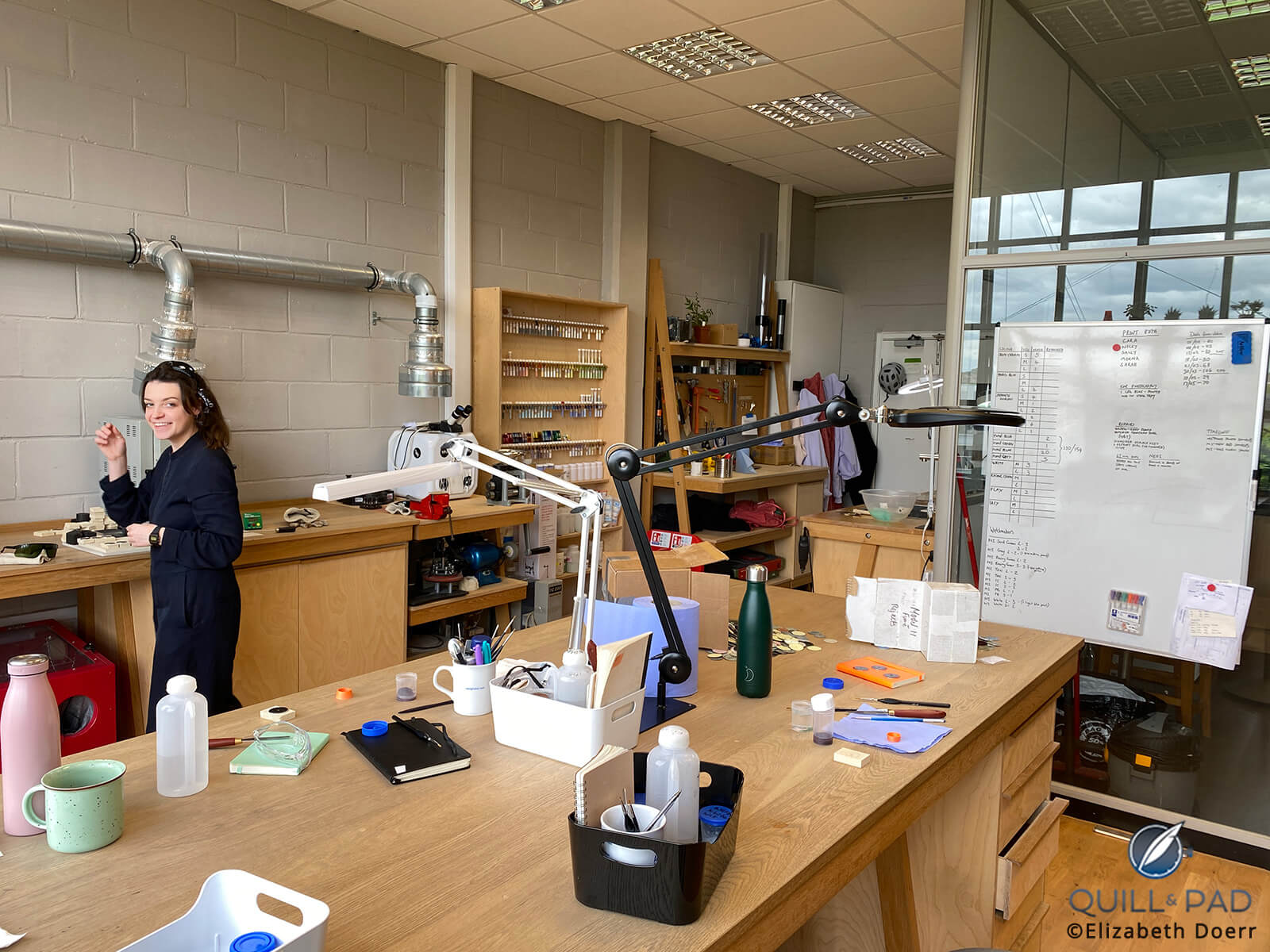 These young artisans – I’m pretty sure I heard that everyone working there is under the age of 32 – carefully hammer, paint, fire, clean, grind, polish, and lap. Then they do it all again. And again, depending on what the dials need. And each color and dial are a wee bit different from the next, often caused by slight height differences in the handmade dials. This is due to the hand-performed polishing and lapping. 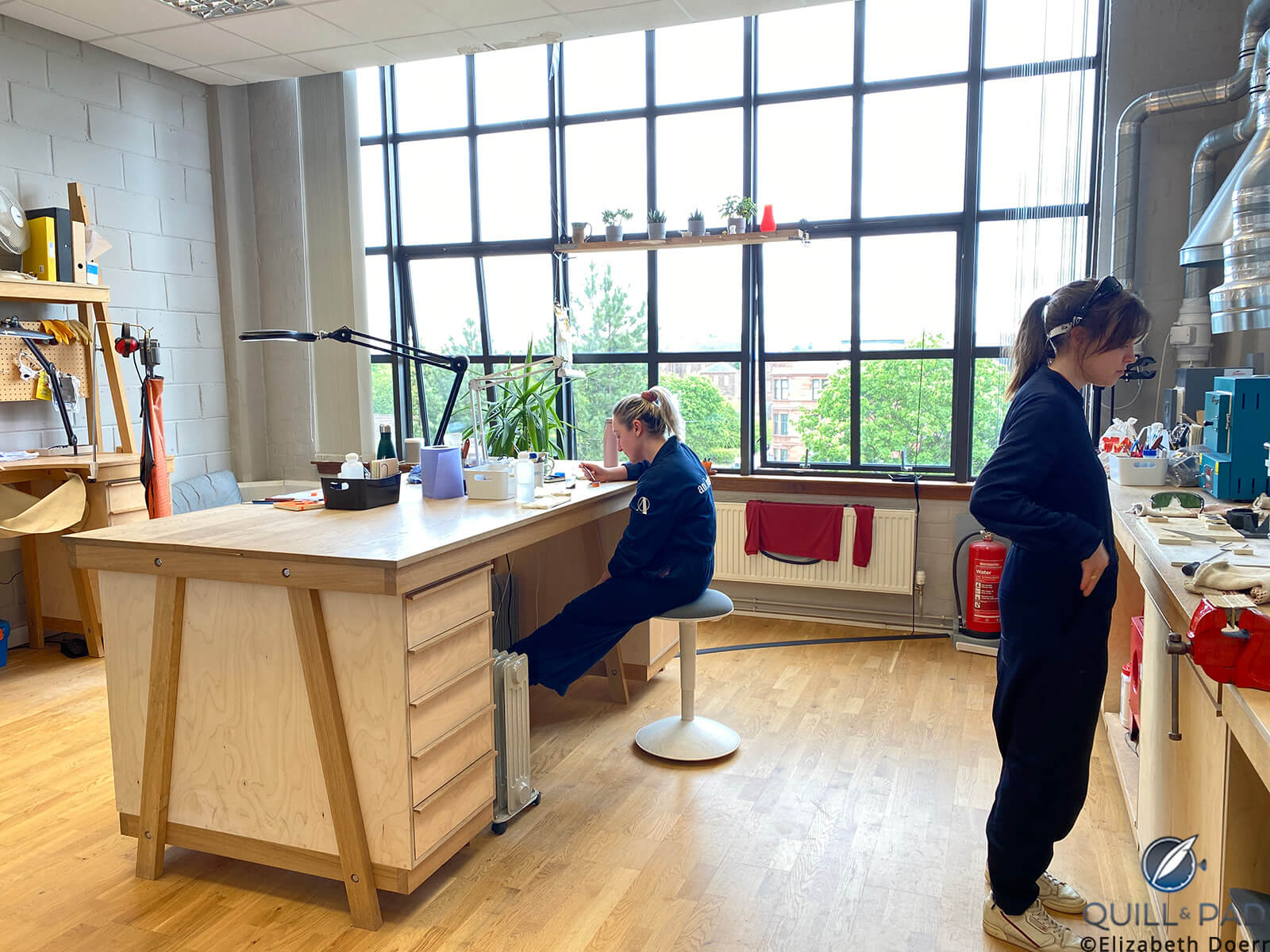 “It’s about finding that perfect point,” Cara Louise Walker, one of the enamelers, told me in her lilting Glaswegian accent as I watched her work.

Nicky Faill, who studied jewelry making, does the careful pad printing on the dials after the enamelers are finished. The machine with rubber tampon that he uses to apply the numerals and markings is more hand-driven than what I usually see in Switzerland, which adds to the handmade charm. The pad printing is fixated at the end by another round of firing in a small kiln in Faill’s area.

I learned here that the Blue Fumé is the most difficult to get the fumé (“smoky”) effect to stand out on. 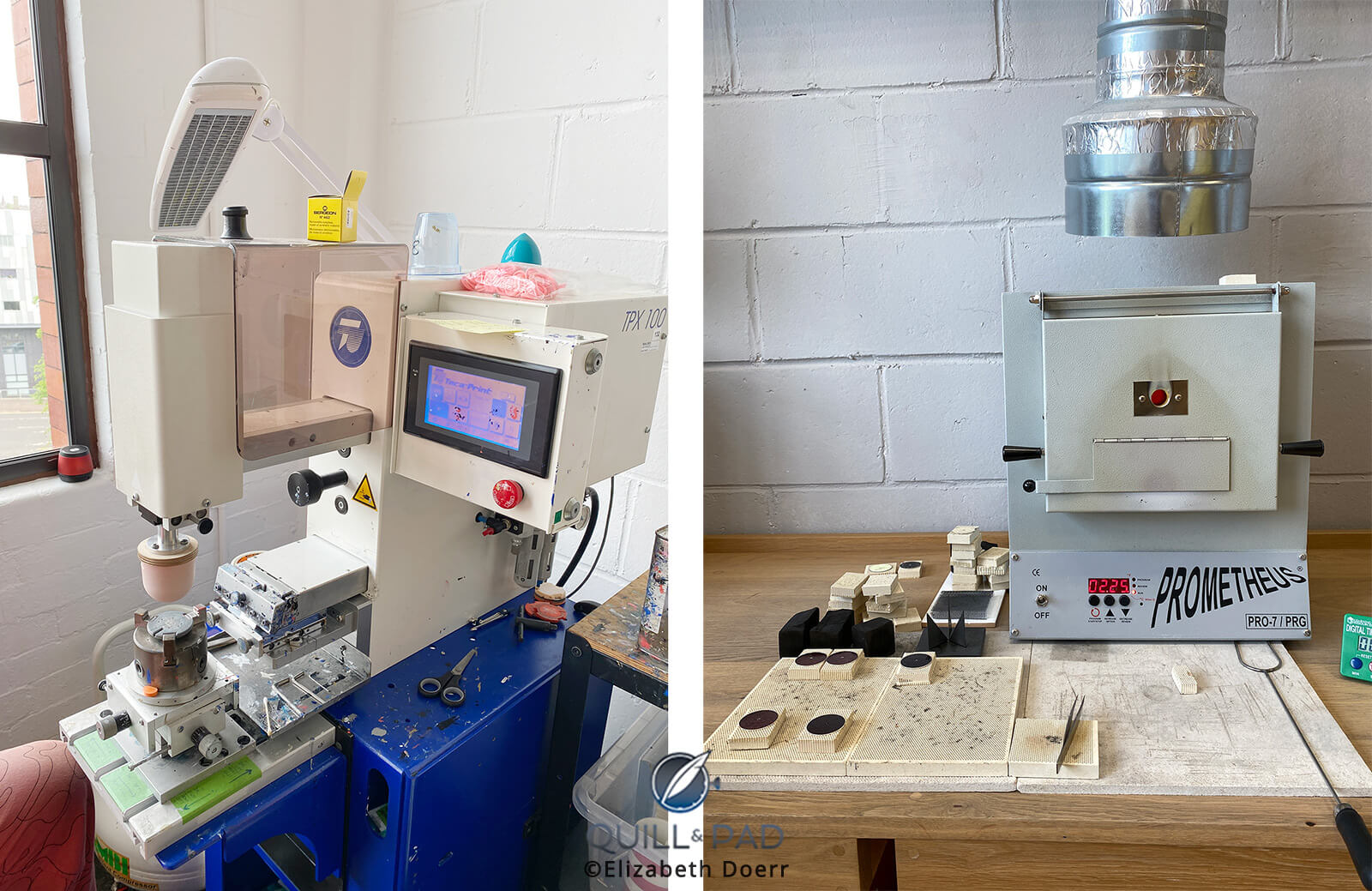 Pad printing and kiln for firing dials at anOrdain

Also different to Swiss processes: at anOrdain the dial feet are applied after the dial is completed. In Switzerland, soldering the feet to the back of the raw dial usually takes place right at the beginning.

When I asked how many dials get made in a day, Firth and the rest of the crew looked at each other a tad helplessly. I’m not sure they’d thought too much about that before. The consensus then seemed to be that each enameler could finish three per day. That’s not really a lot and certainly doesn’t get near anything approaching “industrial.”

One more interesting tidbit: the “reject box.” As you can see from the photo, a lot of rejects get produced at anOrdain. That goes with the territory of enameling. And also goes to show just what a handmade process this is. The rejects are collected and then recycled for the silver, which gets separated from the rest. 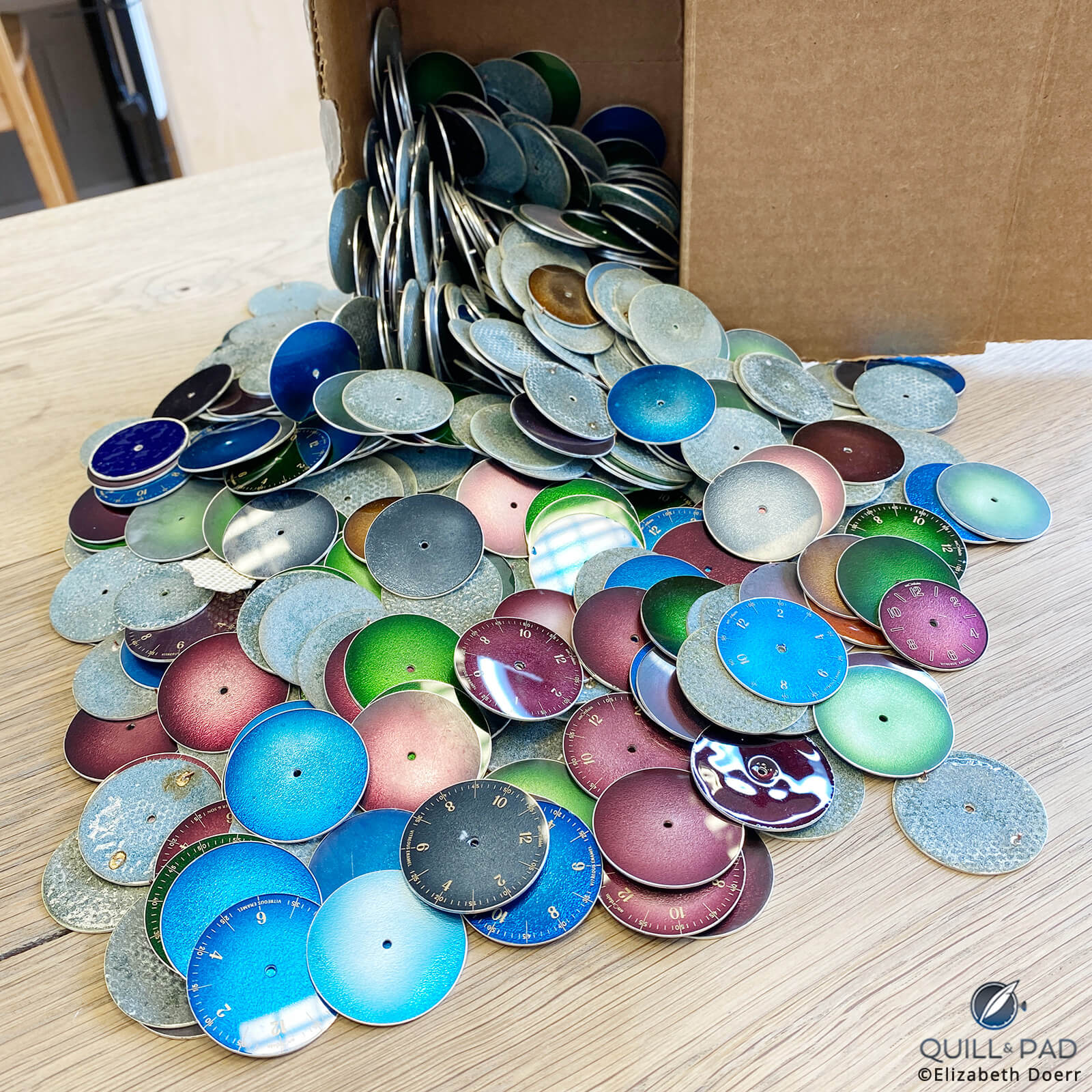 Firth pulled out a surprising tray of dials for me to look at, even if they were unmarked with a logo. I noticed immediately they didn’t look the same as those I’d previously seen from anOrdain. And that’s because they belong to a collaboration between anOrdain and independent watchmaker couple Craig and Dr. Rebecca Struthers.

So I called Dr. Rebecca Struthers to get more of the story on these dials and found out that the collaboration began as the Struthers were working on the dials for their 248 project, which is the duo’s entirely handmade watch. 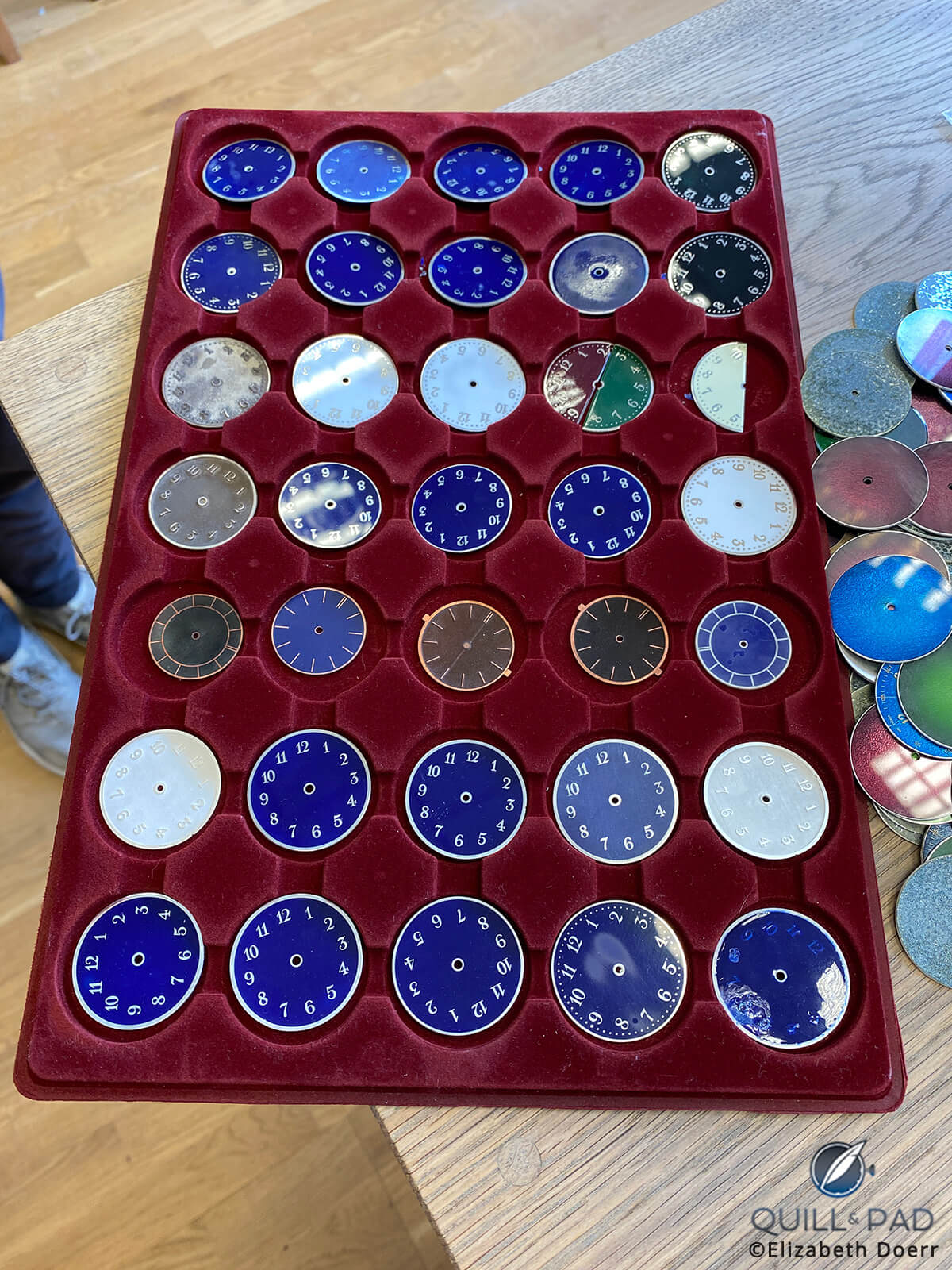 Struthers and Struthers-style dials at anOrdain

In Struthers & Co. Watchmakers’ Project 248, author Colin Alexander Smith wrote that, “The Project 248 dials will, as with previous models, be blanks made by Struthers and enameled “downstairs” by their landlord, Deakin & Francis, a boutique jewelry and enamel manufacturer whose origins date back to 1786, operating from the premises directly below the Struthers workshop.” While that was the original plan, the Struthers soon understood that the dial they had envisioned – enamel with metal numerals that are not appliqués with all surfaces flush and with no CNC machinery involved – was not quite as easy to make as they thought.

Simultaneously, they had struck a friendship with anOrdain’s Lewis Heath, which led to much mutual admiration. The Struthers gave anOrdain’s enamelers their research and development “with no strings attached,” as Dr. Rebecca Struthers reported. “And they took it and ran with it.”

“It’s a collaboration that has grown organically and, as much as I’m enamored by the quality of anOrdain’s work, it’s their approach to making and the impact they’re having on their craft that I find most impressive and feel should be commended,” she wrote in an article for The Horological Journal’s July 2022 issue called “Back from the Brink.”

The result is an eye-catching champlevé-type style that took anOrdain enameler Sally Morrison several years to perfect. “Sally made so many prototypes and was so patient with us,” said Rebecca.

AnOrdain might be using this technique in the future as well as evidenced by dials seen in the workshop with baton markers instead of numerals, which the Struthers think is very exciting. “Working with another craftsperson to get something right and then succeeding and seeing them take it and use it for their own thing too is what it’s really all about,” Rebecca said excitedly. “Especially since this did not exist in the UK before anOrdain. It’s incredibly impressive what they’ve managed to create.”

AnOrdain employs four watchmakers, three of whom work in their own studio right next to that of the enamelers. These three are assemblers for anOrdain’s regular collection while a fourth works in a separate studio on development and future projects. 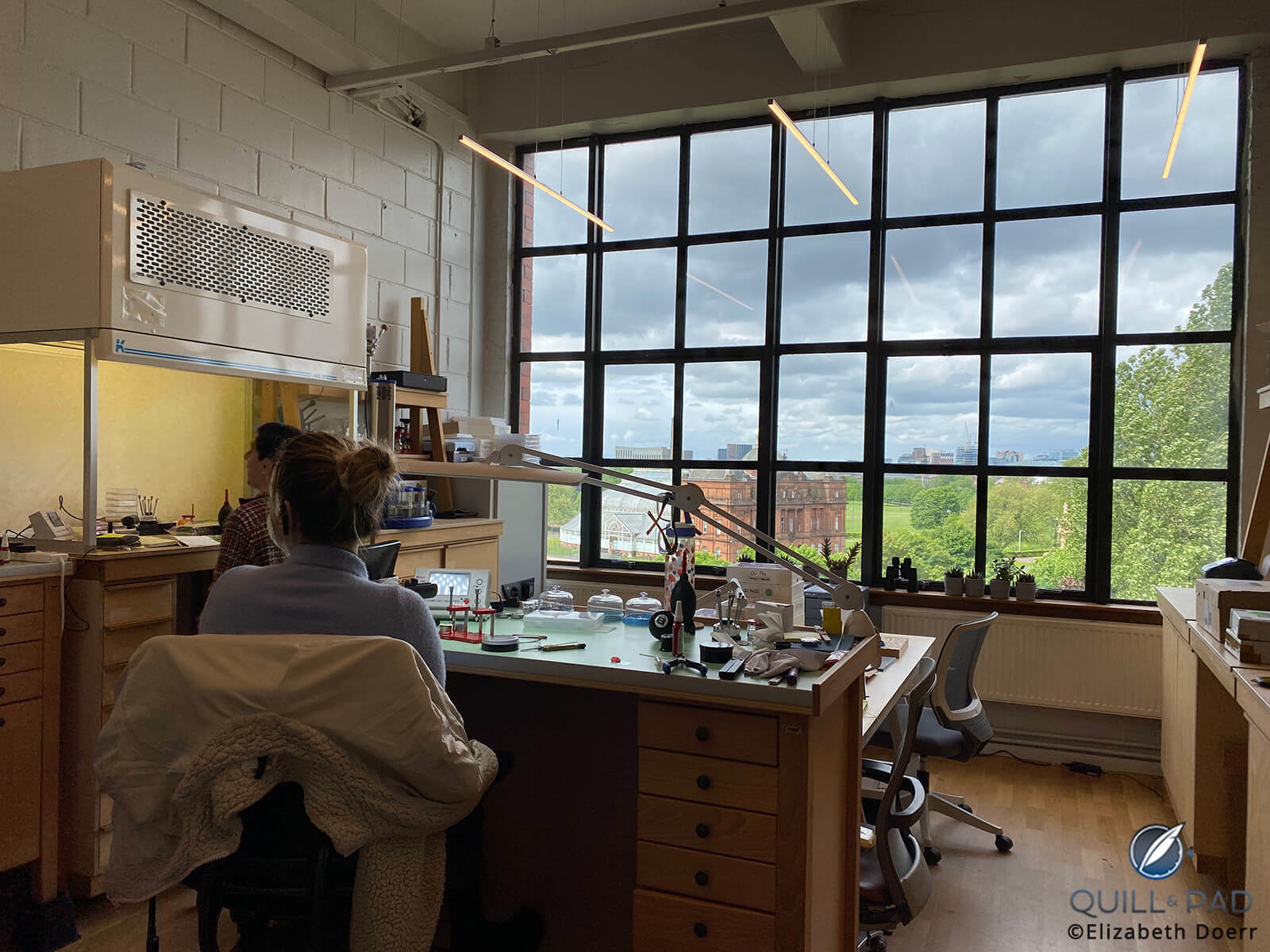 The anOrdain watchmaker studio with its great view of Glasgow

Currently anOrdain is using the Sellita SW200 and SW210 movements in addition to a choice of the La Joux-Perret G100, an ETA 2824 clone with a marvelous 68-hour power reserve, for the Fumé Model 1 collection. 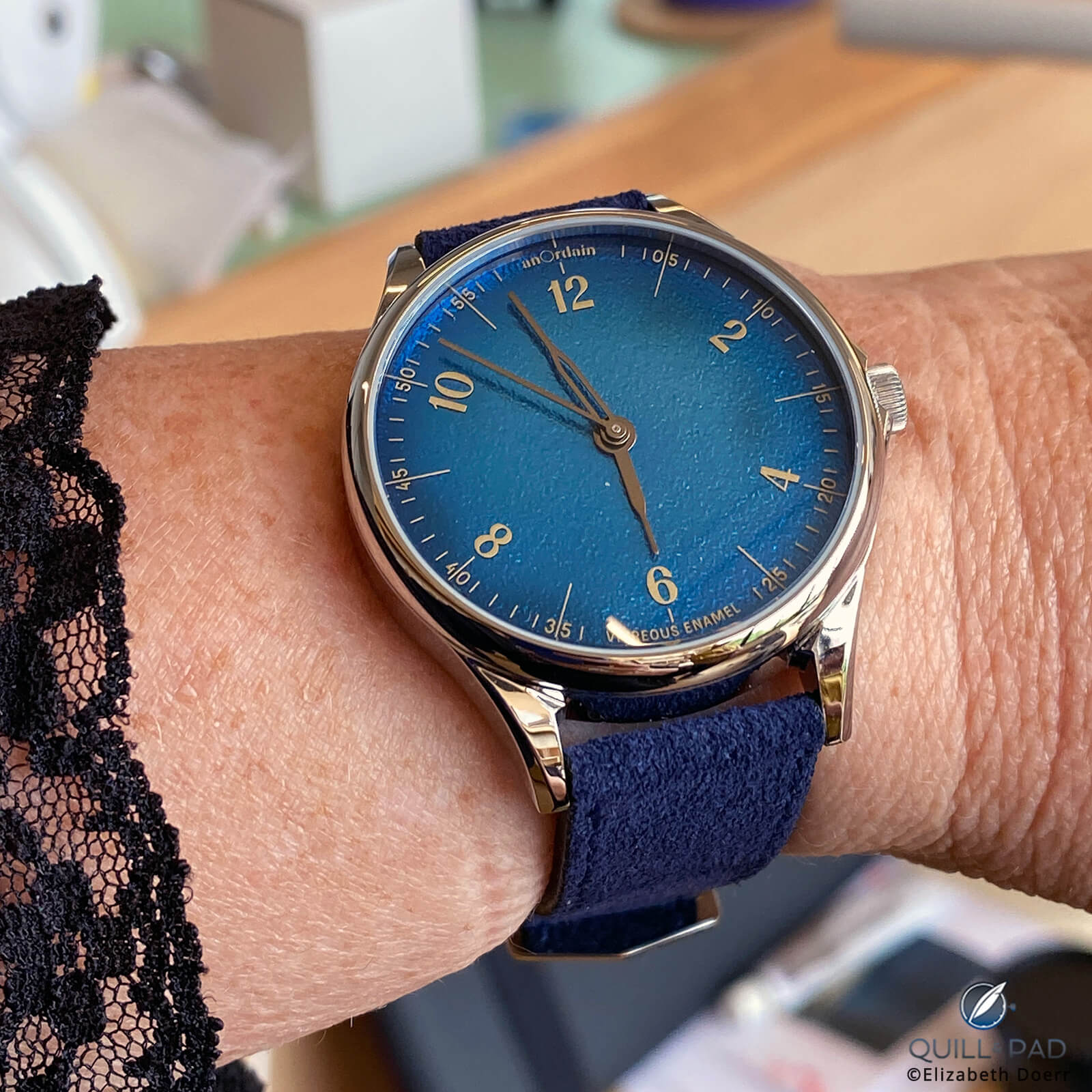 The anOrdain Blue Fumé Model 1 on the author’s wrist

Model 2, whose design is more field watch-like than that of Model 1 but with lovely playful hands, is offered in medium (36 mm, £1,700) and large (39.5 mm, £1,850). The four enamel colors anOrdain produces for this watch are Racing Green, Flax, White, and Grey Haar – the latter “encapsulates an early morning haar, where the sea mist rolls in and sky, horizon, and foreground blend into one.” “Haar” is a Scots word for “thick, wet fog along the seacoast.”

Model 1 is automatic, while Model 2 is manual wind.

All watches, which have five years’ worth of warranty, are on a years-long waiting list. Despite the popularity, though, Heath stays humble with his company. Back in 2018 he told me, “One of the ideas I hold very dear is that an anOrdain watch is sensibly priced and attainable. I think so much of the watch industry has become slightly ridiculous with pricing, but I also know that we run the risk of devaluing what we have done by not charging more. In the end, if we show what we’re doing and are very open about it then I hope people will realize the value.”

Despite the frenzy, he explains the pricing of his watches in some detail to the consumer on a special page, which tells me his attitude hasn’t changed at all.

While the prices for the watches have definitely gone up since 2018, I must say that that is more than justified. Now to figure out how to get one of those fumé-dialed watches . . .

Meet The Struthers: English Watchmaking The Old-Fashioned Way . . . Sort Of