There’s no doubt that we live in challenging times, and when it comes to markets what goes up usually does come down – at least within the boundaries of established cyclical behavior. But if the world is coming to an end and the watch market is in total collapse, it certainly wasn’t evident to me earlier this month when eager buyers from around the world scrambled to buy a dazzling assortment of important watches at the annual Geneva November auctions.

I was sadly unable to attend this time around in person (so no in-person photos, I’m afraid), but like many of my pals I followed online, and over the past couple of weeks I’ve taken a closer look at the results from the “big three” auction houses – Phillips, Christie’s, and Sotheby’s – to discern some patterns. In no particular order, here we go!

Hype watches are not yet dead: Sure, in the market overall we’ve seen some price softening from the idiotic levels of early 2022, but that doesn’t mean that prices on some of the most heavily hyped watches have returned to normalcy.

I was particularly interested in three examples of the Rolex Oyster Perpetual 41 turquoise blue in the sales, as I picked one up upon its launch and have been intrigued to see it swept up in the fervor for all things remotely “Tiffany,” even if in this case the color of the dial is not in that hue. 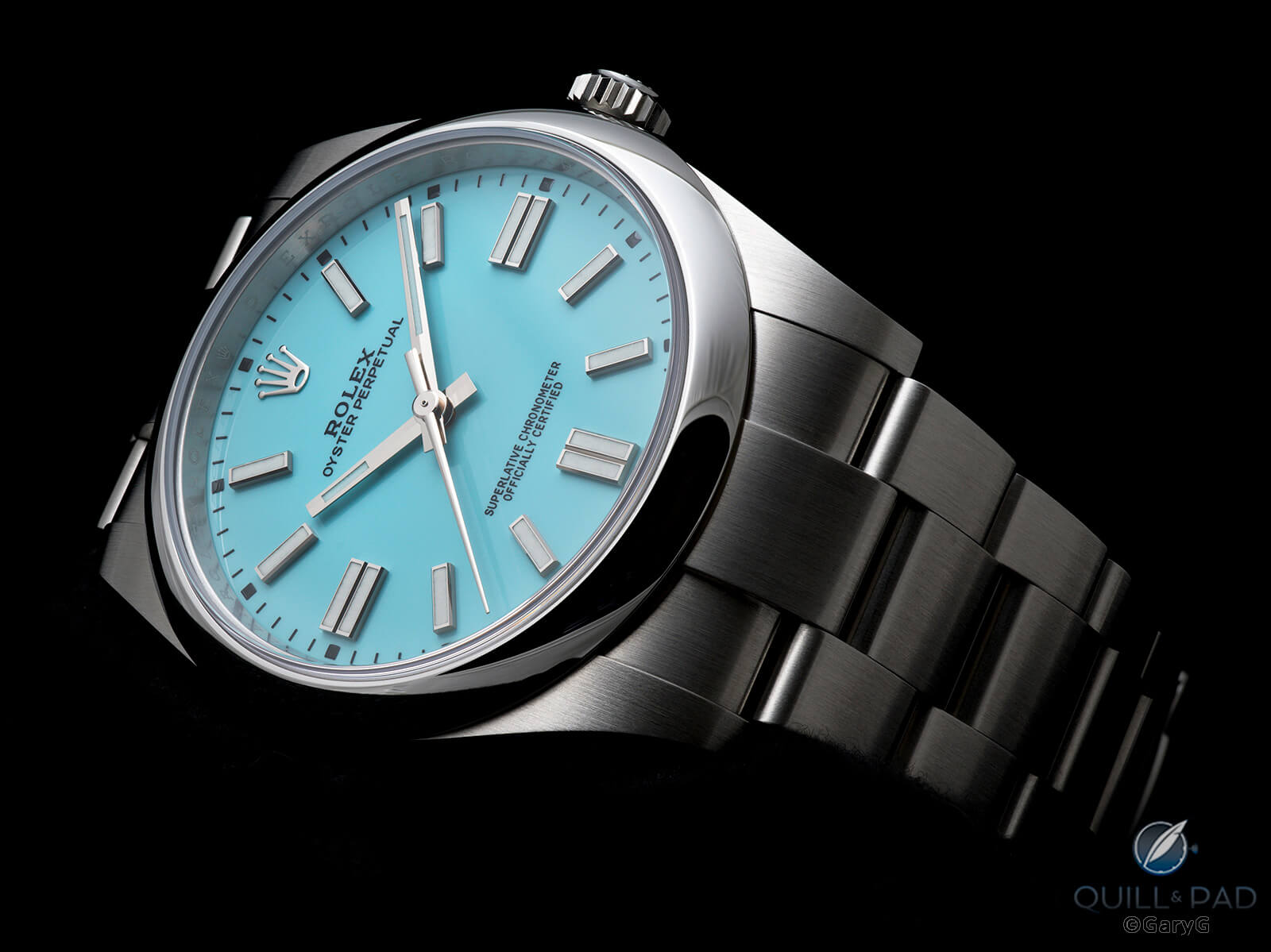 Imagine my amazement to see Phillips’ example sell for CHF 30,240 (all prices mentioned here including premium), Sotheby’s for CHF 31,500, and Christie’s for a whopping CHF 52,920.

One reason I was so keen to have a Stella-inspired Rolex was my conclusion that the original Stella watches were far too expensive for me; yet in the very same Christie’s auction, a vintage Stella Day-Date in gold on a President bracelet sold for an identical CHF 52,920. Go figure.

In other action, even watches still in production drew big premiums: two Patek Philippe Reference 5164A travel time pieces sold for over twice their retail list price of $41,800, for instance.

And in the world of the steel Patek Philippe 5711, the ostensibly less desirable white dialed “piano key” steel version, pulled in a quite healthy CHF 113,400 at Christie’s. 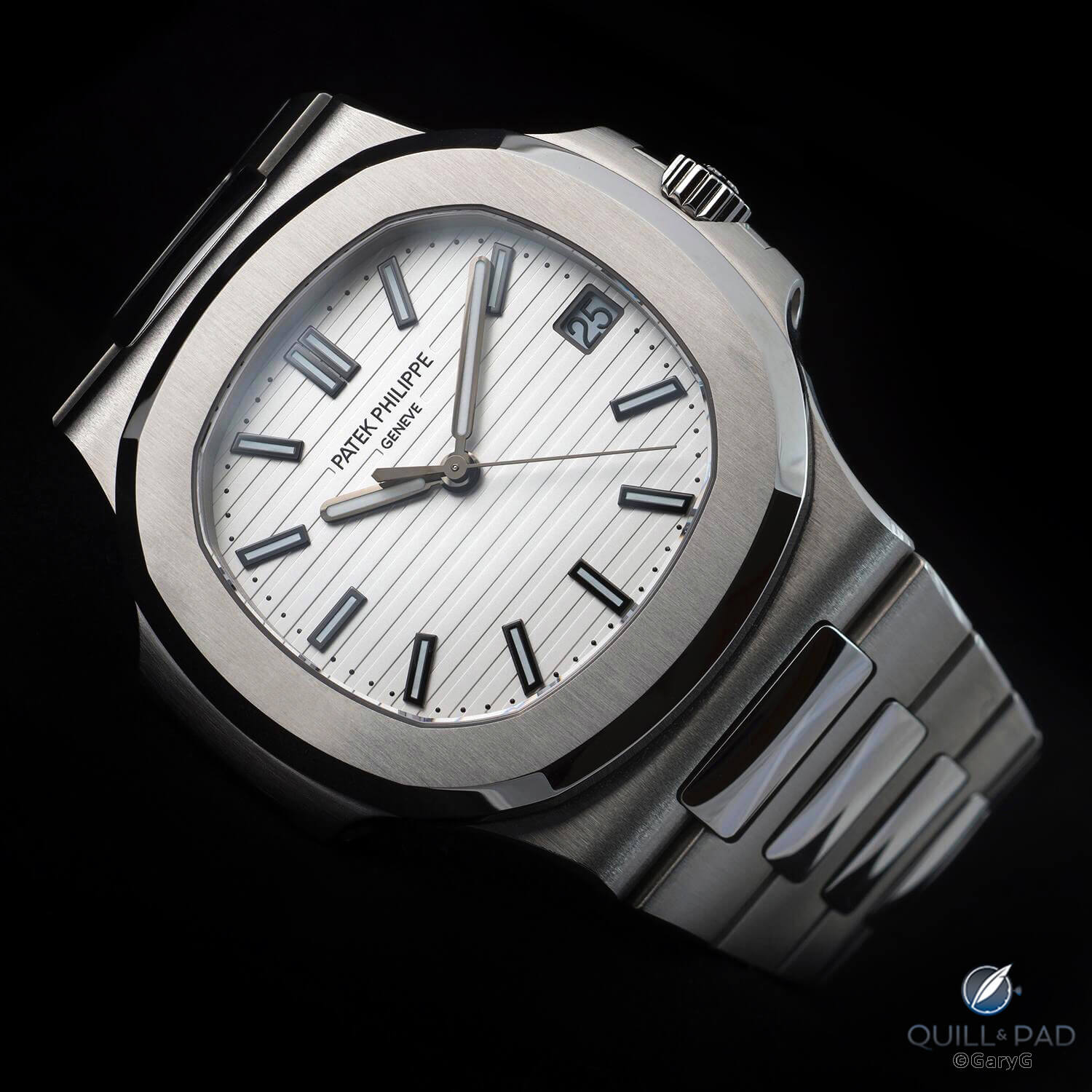 Above retail: a friend’s (not for sale) Patek Philippe Reference 5711 “Piano Key”

Uniqueness, or at least rarity, pays: It was a good auction week for Patek Philippe’s Vintage Collection re-issues, with a “pre-Saatchi” salmon-dialed Reference 5070G selling at Phillips for an eye-watering CHF 852,800 vs. a high estimate of CHF 400,000 and a Reference 3940R “Saatchi” with brown dial drawing CHF 214,200 at Sotheby’s. 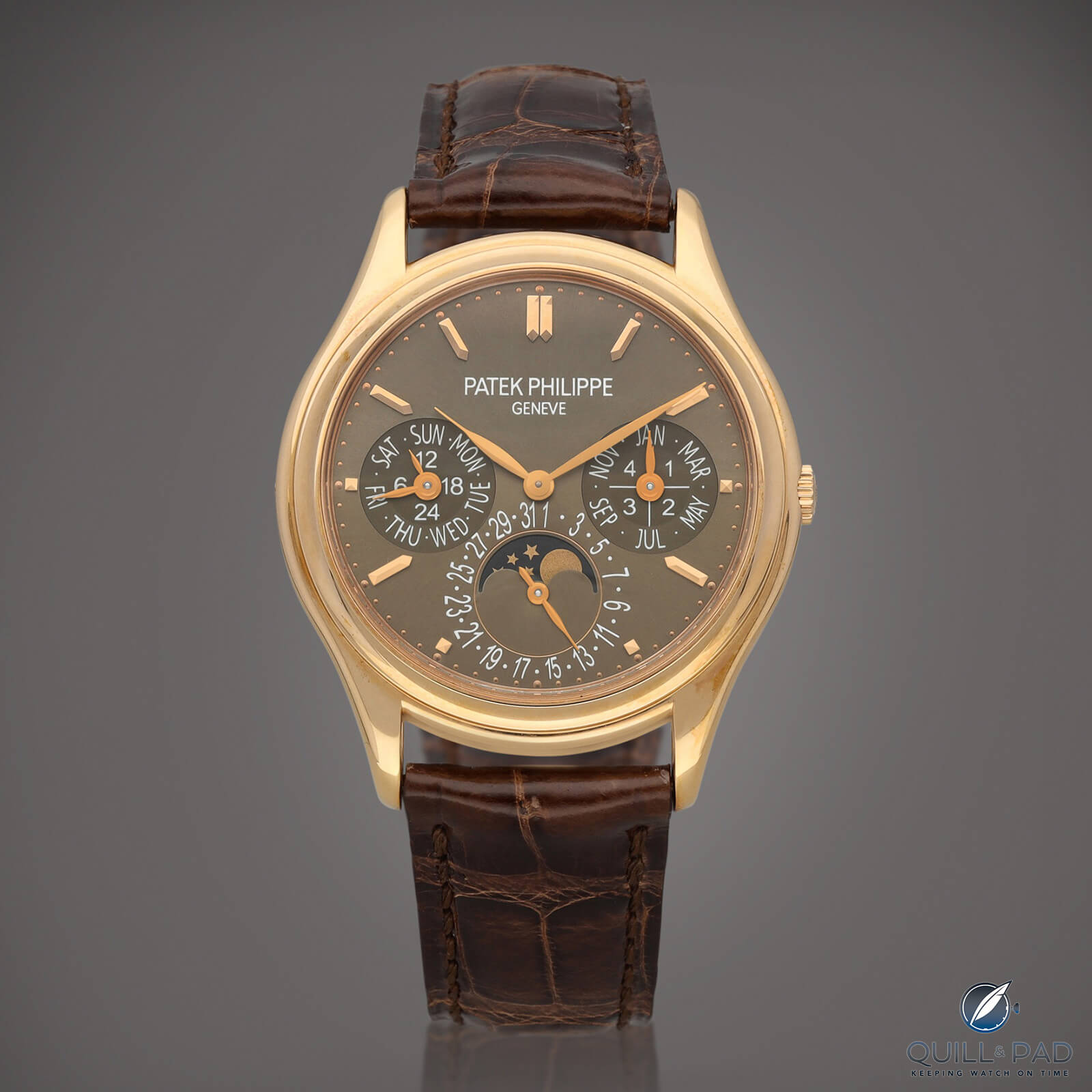 The Zenith x Voutilainen x Phillips unique Observatory watch in niobium (who knew there was such a thing?) pulled in CHF 315,000; the Vianney Halter La Resonance prototype CHF 252,000; and my pal’s Christian Klings tourbillon pocket watch a more modest – but still excellent for a pocket watch – CHF 163,800.

A very original and possibly unique Vacheron Constantin Reference 4764 “Cioccolatone” in platinum sold at Sotheby’s for CHF 604,800, within its estimate range but to me a big price for this reference. 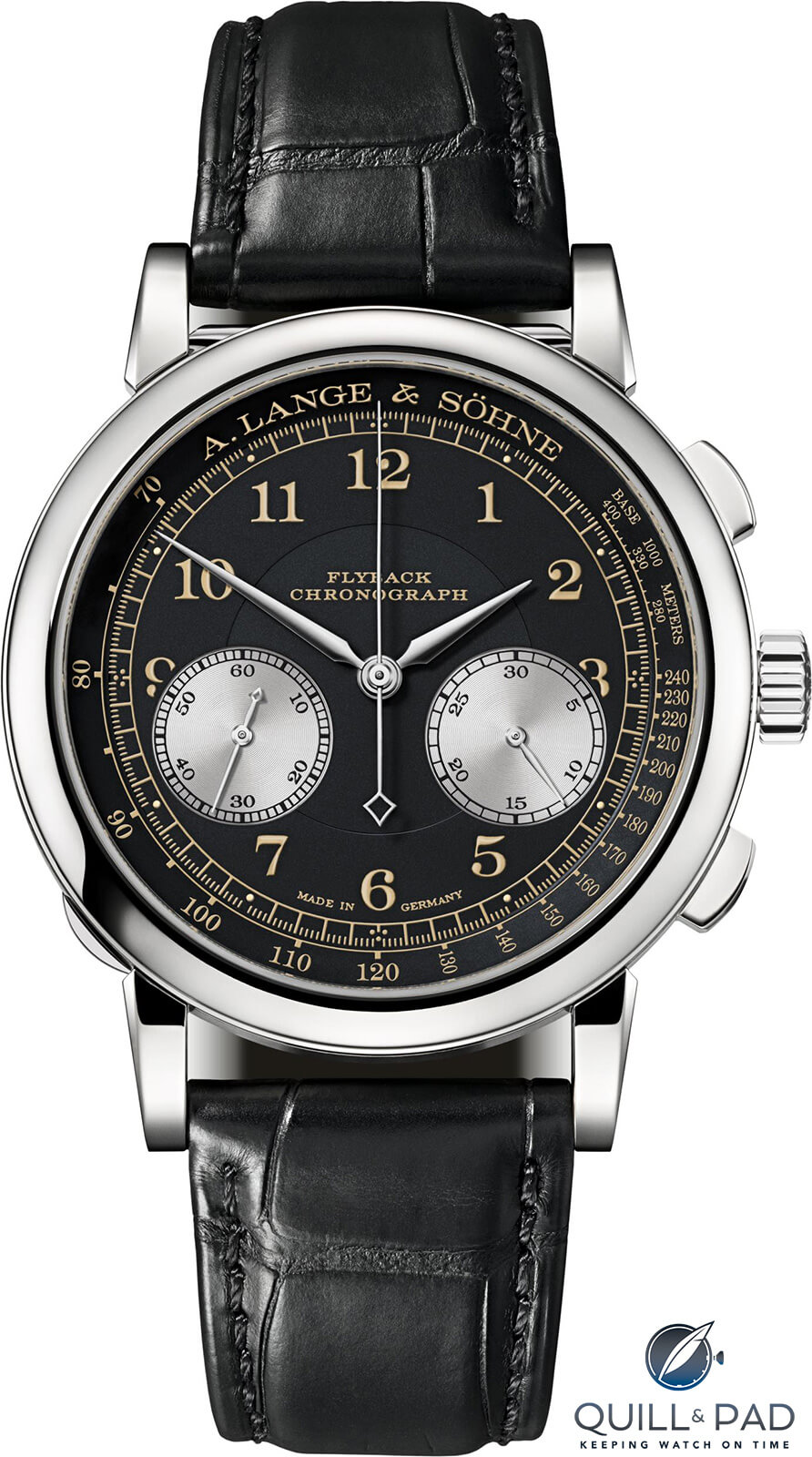 For a good cause: unique A. Lange & Söhne 1815 Chronograph sold for The Prince’s Trust

And one of the highlights of the week, the unique “Hampton Court” A. Lange & Söhne 1815 Chronograph, earned CHF 1,058,500 for The Prince’s Trust charity through Phillips. 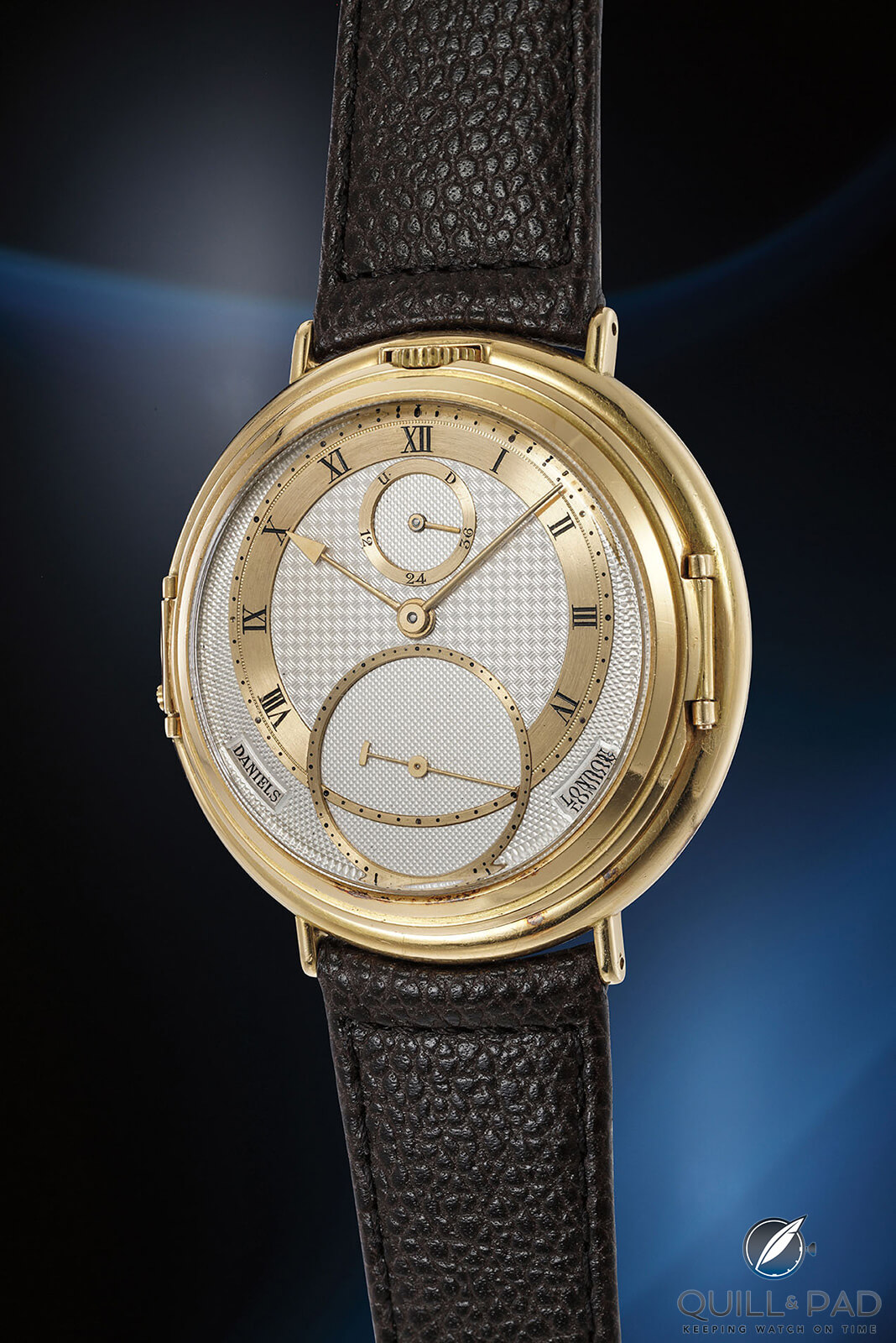 Trees don’t grow to the sky: The November Geneva auctions typically give us a chance to answer the question “how high is up?” in a given market, and at this point it looks as if “up” is on the order of CHF 4 million, the approximate amount paid at Phillips for the unique George Daniels Spring Case Tourbillon. I know it seems ridiculous to say it, but to me this price was perhaps a bit soft, as were top bids for some of the other featured lots of the week such as the  Patek Philippe Reference 1518 Cartier at Christie’s that did well at CHF 2,214,000 but did not clear its high estimate, perhaps the only high-profile double-signed piece that disappointed a bit. And a “Lemon” Paul Newman Rolex that sold at CHF 3,414,000, within its range but well below the high estimate of 5 million.

Some ships have sailed: Whether it’s selling, buying, or failing to buy, my advice to you: whatever I do at a given moment in time, do the opposite! For years, an object of desire for me, the Patek Philippe Reference 5970G perpetual calendar chronograph, was readily available at an all-in price of between $105,000 and $120,000. To state the obvious, that’s a lot of money! And given the stability of the market price, I figured I could always sell some pieces later and pull together the needed cash if I concluded I really, truly, needed to have one.

Oops: Phillips this time around sold 5970s in all colors for dramatically higher realizations, including the white gold G version, for CHF 264,600. If there’s good news, it’s that I have a friend who owns one and I can perhaps wear his at lunch from time to time . . .

Indies remain strong: Notable independents continued to see strong results; in addition to the Daniels watch mentioned earlier that was the week’s top lot, two other Daniels watches, an Anniversary and a Millennium, performed very well, selling respectively for CHF 693,000 and CHF 828,000. 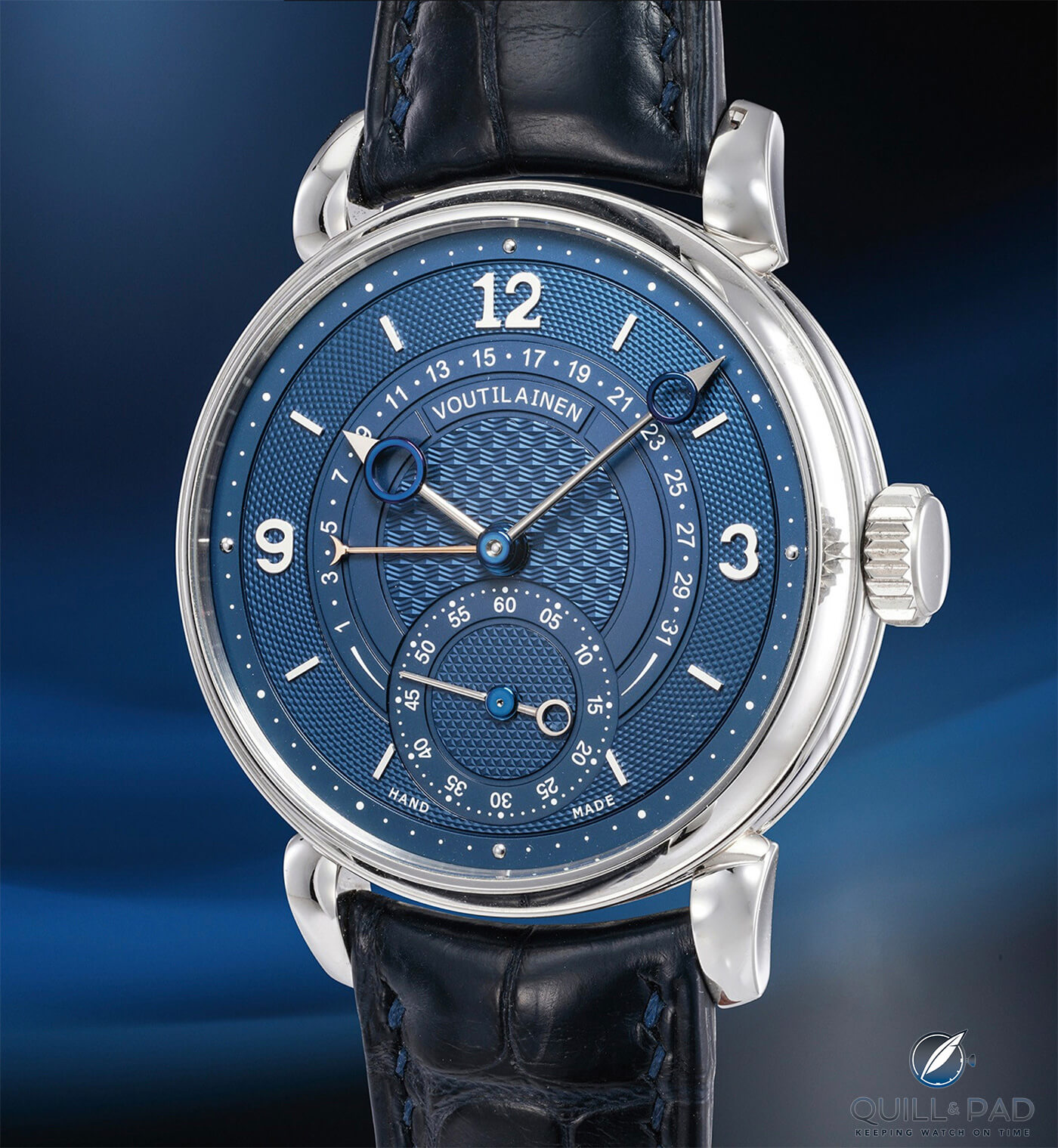 Kari Voutilainen was represented with several watches, and while not all ended up priced in the stratosphere some did, including a 217QRS retrograde date that brought CHF 277,200 against a high estimate of CHF 160,000.

The Grönefeld brothers were represented with the No. 0/188 1941 Remontoire selling for CHF 151,200. I had the chance a few years ago to buy this exact piece for much less, so I’m guessing the now-former owner is pretty happy he waited!

While prices for F.P. Journe watches seem to have come down off the ceiling, a number of the more important Journe watches (including those in the Jean Todt collection I’ll return to shortly) still sold at prices we would have shaken our heads at just a few years ago. In a show of marketing sleight of hand for the ages, Sotheby’s positioned a 1999 Journe Resonance not as a Souscription, not as a pre-Souscription, but as a “pre-production” watch, and they and the owner were rewarded with a sale price of CHF 1,071,000. 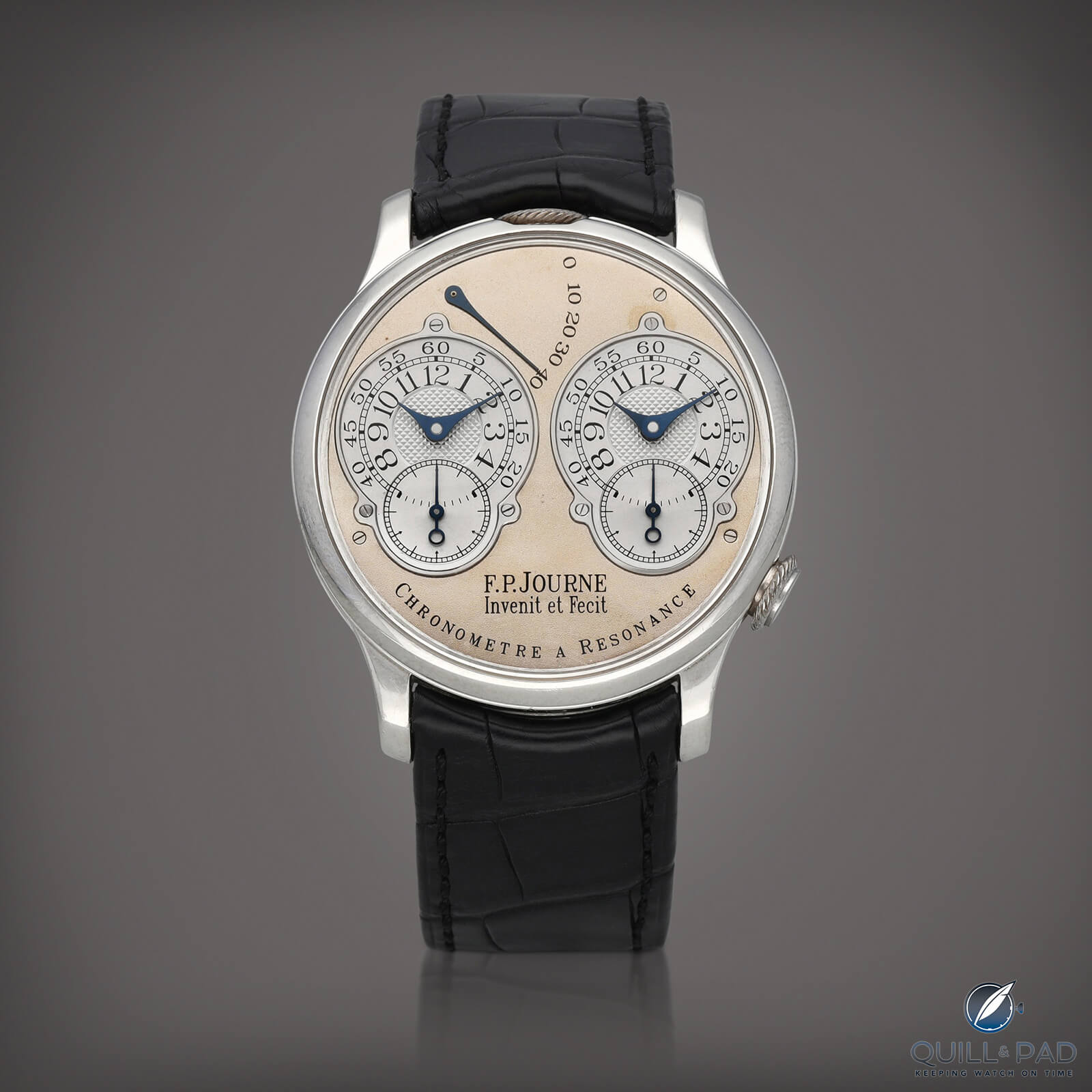 And in a bit of a surprise, several Daniel Roth pieces were sold with solid results, including a Papillon jumping hour watch from 2002 that brought CHF 50,400 at Christie’s against a high estimate of CHF 12,000.

Contemporary and neo-vintage take the spotlight: While it looked to me as if Phillips maintained something close to its usual mix of vintage and more modern watches, the other two big houses loaded up with watches from the past few decades, including not only the expected Rolexes and Pateks but others including Vacheron Constantin, A. Lange & Söhne, Cartier, Omega, Richard Mille, and perhaps a few too many Audemars Piguet Royal Oaks.

Two A. Lange & Söhne Datographs sold at Sotheby’s bear mention: a pink/black “Dufourgraph” that went for CHF 94,500 and a first-generation platinum Dato on a fitted bracelet that drew CHF 113,400. 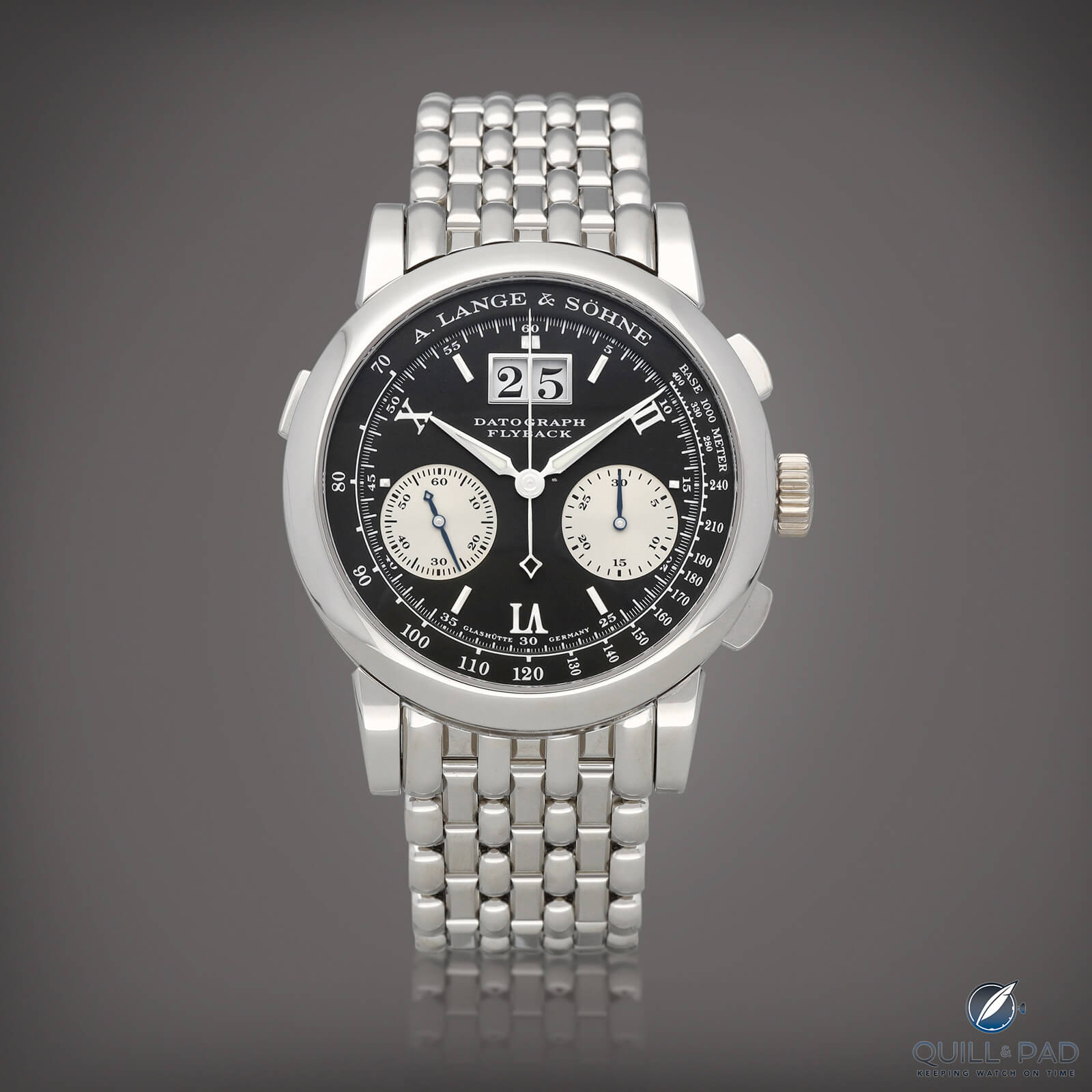 Provenance matters, at least in some cases: On November 6, 2022, Christie’s auctioned off 111 timepieces belonging to former Ferrari supremo and FIA head Jean Todt for a total of CHF 31.9 million, an average of CHF 279,000 per watch, leaving me only one question: what will he wear now?

The stack of ruthenium dialed and “J.T.” inscribed F.P. Journe pieces did predictably well, and the prices for the Richard Mille watches on offer were out of this world, topping out with a RM 56-01 sapphire crystal-cased tourbillon that went for CHF 3,654,000 and including a unique RM 001 that sold for over CHF 2 million and seven other Richard Milles that each cleared a million.

The top two Journe lots in the Todt auction were a red-dialed “J.T.” Centigraphe that made almost CHF 2 million, and a unique Sonnerie with a petrol-blue dial commemorating Ferrari’s seven consecutive Formula 1 Constructors’ championships under Todt that cleared 3 million but did not approach the top estimate of 4.4 million in another sign of a touch of softness at the very, very top of the auction market this time. 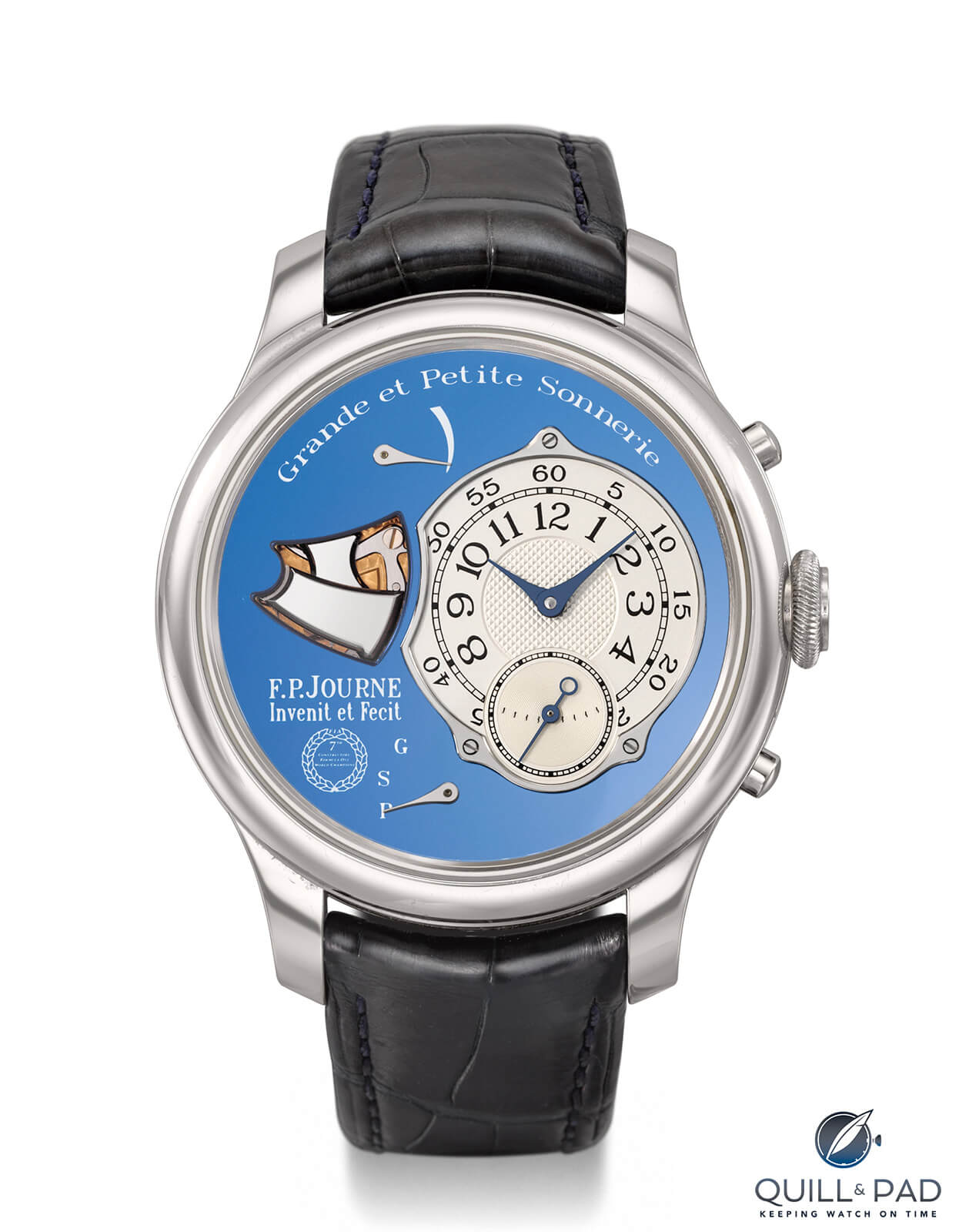 Such was the appeal of Todt’s ownership that many of the surrounding galaxy of watches, including those from Girard-Perregaux and Franck Muller, sold at up to twice their high estimates.

In other action where ownership mattered, an expedition-worn Rolex “Pre-Explorer” worn by the third man to summit Mt. Everest crushed its high estimate of CHF 40,000 at Christie’s by selling for CHF 289,800.

Big complications stage a comeback: It’s been a tough several years of auction viewing for folks who bought big-time complications from Patek Philippe at retail prices, but those important watches now seem to be staging a return to prominence. 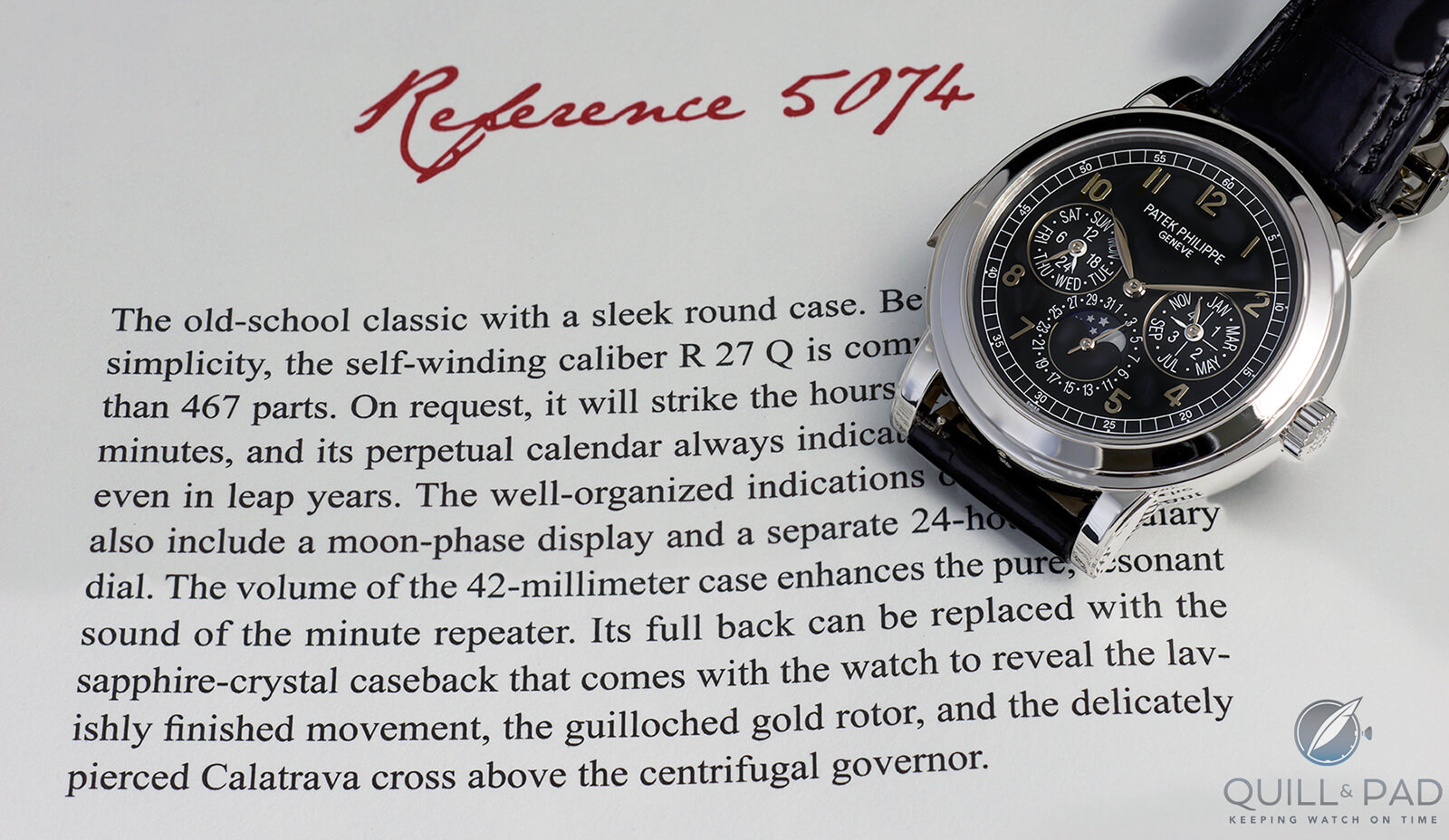 The Simplicity is now a million-dollar watch: Following a very strong recent result for a 34 mm Philippe Dufour Simplicity, all eyes were on the final lot in the Phillips auction, an ostensibly more desirable 3 7mm example in white gold.

There were some questions as to whether this watch, with serial number 204, would perform as strongly as watches among the original 200 made by Dufour; but in the end this seemed to make little or no difference as the watch sold for CHF 1,022,200, much to the delight of long-term owners. 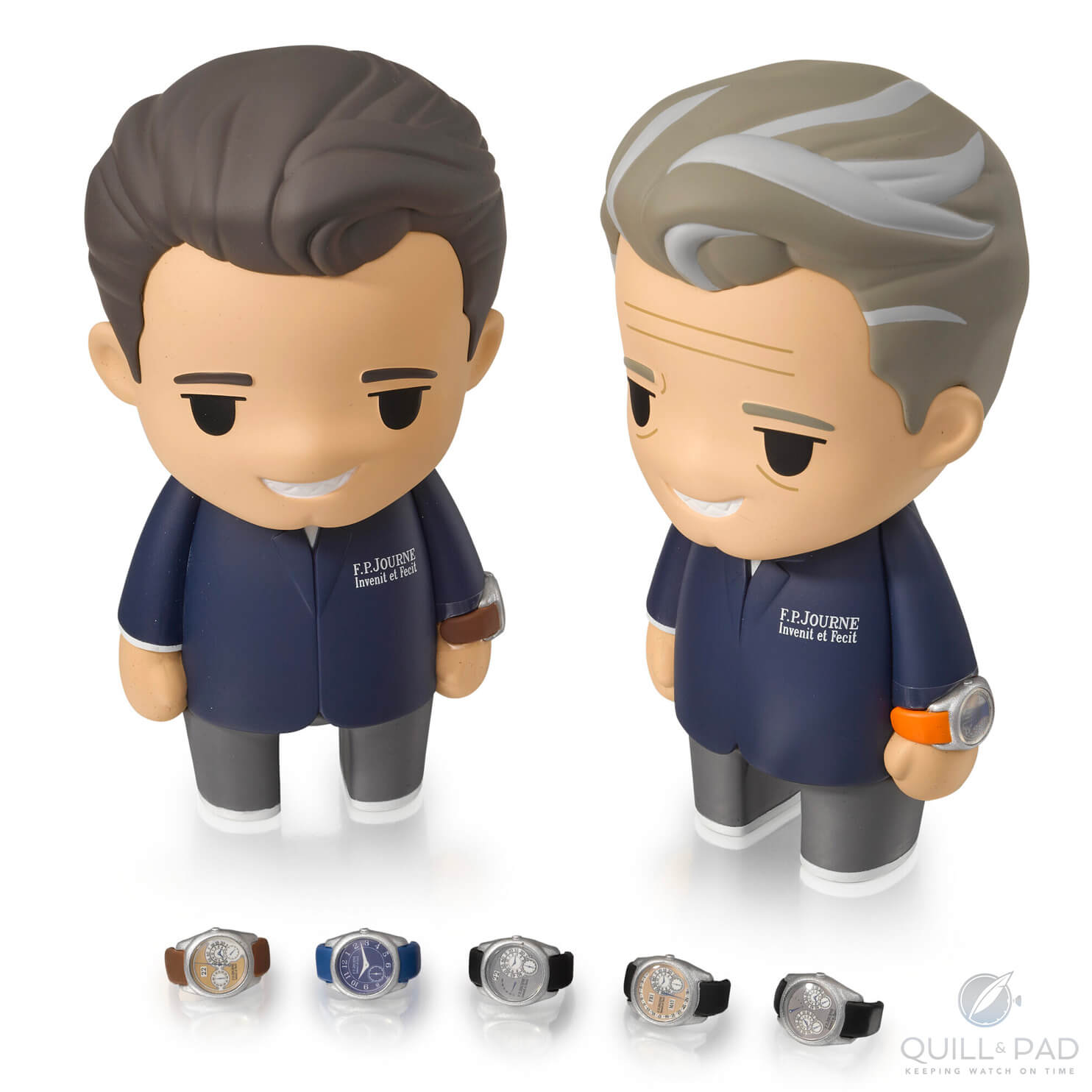 Too much money, too few goods: dolls sold at Christie’s (photo courtesy Christie’s)

Still too much money chasing too few goods: We all hate going home from a sale empty-handed, and F.P. Journe is a true legend in the industry. Still, there’s something not right when a set of two plastic dolls that claim to look like the great man, but in reality are completely generic figurines in blue FPJ coats sells for CHF 25,200. That is all.

White gloves now the norm: Six lots were withdrawn prior to sale at the Phillips auction, but if we don’t count those a total of 620 items were offered across the big three auctioneers, and 619 of them sold. The sole exception was Christie’s lot 109 a two-tone Royal Oak Reference 5402SA bearing serial no. 1, whose reserve was perhaps somewhat optimistic.

As someone used to hearing auctioneers announce “pass” at the conclusion of somewhere around a quarter of the lots in a given auction, I find this shift remarkable. Some of it is certainly due to the houses’ encouragement of low reserves, but when so many lots sell well above their high estimates and nearly zero items remain unsold, it signals continued underlying demand for rare and high-quality pieces. 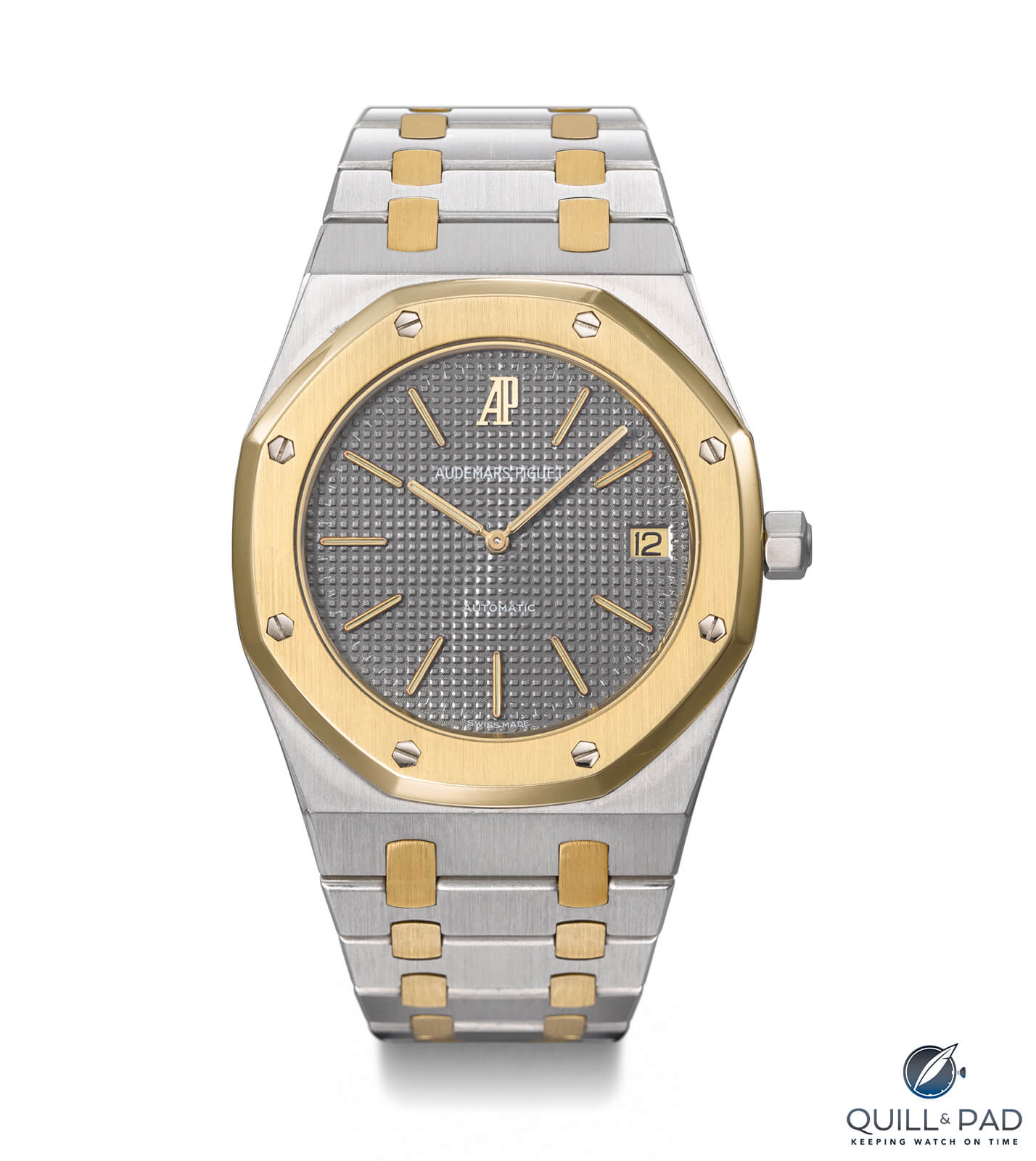 And then there was one: only unsold watch at the big three Geneva auctions (photo courtesy Christie’s)

Now a three-horse race – at least: Not that long ago, Phillips clearly ruled the roost among the big auction houses. Over a few years, Christie’s did a great job of getting back into the top echelon, and now Sotheby’s, which had lagged, presents assortments that are at the level of the others.

At the same time, new auction houses and auction models, including lower-commission and no-buyer-premium approaches and fully online bidding, are continuing to proliferate. At some point it will become too overwhelming to follow it all; but in the meantime, I’m really enjoying watching the action and looking forward to attending future rounds of the big auction weeks in person.

What are recent sales telling you about the state of the watch market? I’ll look forward to reading your comments. In the meantime, happy wearing!