Why I Bought It: A Bulova Like Mobster Bugsy Siegel’s

In addition to being utterly obsessed with high-end, mechanical watches of the Swiss variety, Quill & Pad’s regular reader Quentin R. Bufogle is a freelance writer, former contributor to the former Las Vegas CityLife, occasional blogger, and author of the recent memoir King of the New York Streets.

No, that’s not a Zen koan or something Yogi Berra once let slip. And no, I’m not trying to go all Jedi mind trick on you. It’s 3 pm. I haven’t yet had my first cup of coffee, and here I sit in an old bathrobe struggling to collect my thoughts (what precious few I can muster). Gimme a break.

High or low horology. Vintage or this year’s Sub. Swiss, German, or Japanese. Collecting watches isn’t just about the watch itself. It’s also about the stories and history embodied by a particular piece. In certain instances, the person who once wore it.

As the author of a fictional tale about mobster Benjamin “Bugsy” Siegel, I just had to have a 1940s Bulova like the one Siegel famously sported. 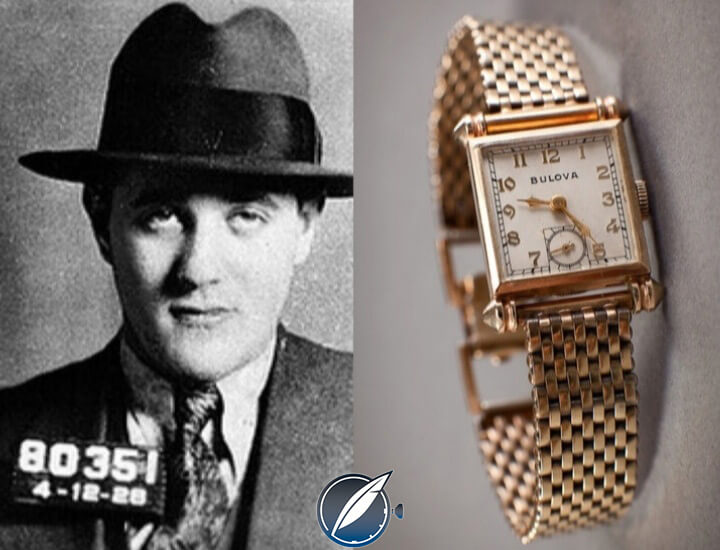 While fellow mobster and Brooklynite Al Capone had chosen a rather sober, understated Rolex Prince as his timepiece du jour, and childhood friend and partner in crime Charlie “Lucky” Luciano flashed a gold Patek Phillipe Reference 1516 – a piece befitting his status as “capo di tutti capi” – Bugsy opted to keep things local. His preference was for Bulova, a native New York brand founded in 1875 with operations in the borough of Queens – my hometown. 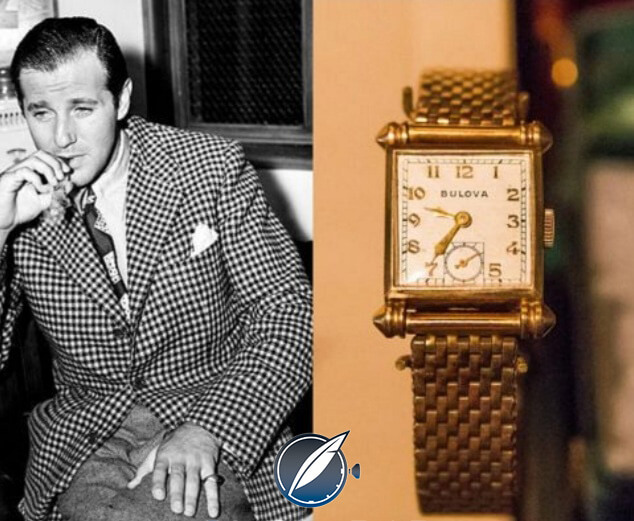 Currently on display at Sin City’s Mob Museum, Siegel’s 18k solid gold Bulova Clinton features a square, tank-style case and handsome basket-weave bracelet. While it was never my intention to ape Siegel’s style or score a clone of his now famous timepiece, I did want a Bulova that was period appropriate. Something that might’ve been spotted on the wrist of a guest at the then newly built Flamingo Hotel & Casino – a high-roller absent-mindedly fiddling with a stack of $100 poker chips . . . or perhaps about to make a pass with a pair of dice some long, leggy drink of water had just blown the breath of life.

Full disclosure: I’d spent nearly 20 years working like a horse (at times, two) in Vegas resorts. The last five as chef de partie at Sin City’s only five-star property – not to mention a solid decade at the “Fabulous Flamingo” itself. Sadly, the Flamingo I knew had little in common with the palace Ben Siegel had literally spent his life’s blood – and $6 million in mob cash – to build.

From the solid Italian marble walls to the fancy, art-deco furnishings and the palm trees he’d have trucked in from Florida to shade the enormous, blue-tiled swimming pool, Benny spared no expense. He even spent a cool million – the entire budget originally green-lit by the mob – to run individual sewer lines for each of the Flamingo’s 105 rooms. Heck . . . they didn’t call him “Bugsy” for nuthin’!  Sixty years later, when I reported for my first shift, the Flamingo had swelled to a property with four towers and approximately 3,500 rooms. Ironically, all that remained of the original structure was the plumbing.

In 1993 – in their infinite wisdom – the corporate “suits” who ran the Flamingo decided to do away with the last remaining vestige of Ben Siegel’s original structure. They bulldozed the hotel portion of the original Flamingo, which still stood fully intact out back by the pool; like some ancient artifact that had somehow been swallowed-up by a vortex in the spacetime continuum only to be deposited at the foot of those four gleaming, new high-rise towers – as incongruous as if someone had stuck the Great Pyramid of Giza between a Del Taco and a gentlemen’s strip club.

And just why did those corporate suits choose to do this, you may ask? Answer: to make way for an exotic bird sanctuary! You heard me right. Why allow tourists a chance lay hands upon Sin City’s very own version of Plymouth Rock? To possibly spend the night in Ben Siegel’s actual penthouse suite replete with a maze of trapdoors and hidden passageways allowing him to make like Chris Angel if the Feds came a knockin’? Nix the history and romance – the fascinating gangster lore. Forget the colorful, Runyonesque vibe. Give the tourists what they really pined for: a gaggle of African penguins! 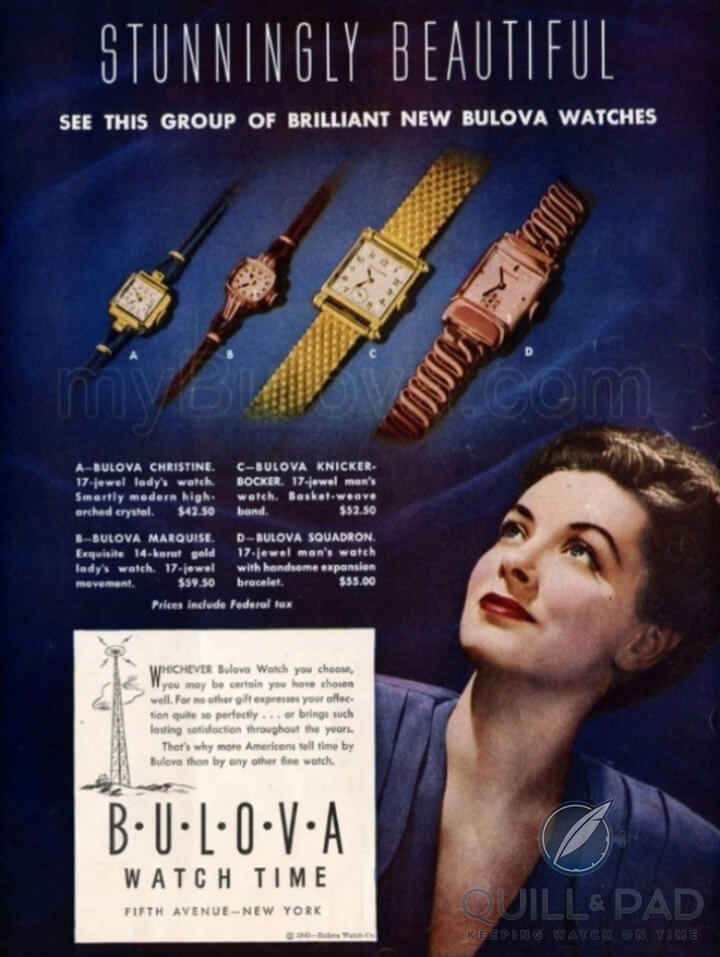 Okay, so I’ve gotten a bit off topic. Let’s bring things full circle back to that Bulova I decided to purchase. If the splendor of those bygone days was indeed bygone, I was determined to add a piece to my watch collection that would somehow hark back to those dust-strewn days of early Vegas, a time when the occasional tumbleweed still ambled along what would one day become the famous Las Vegas Strip. Something I could wear on my wrist to serve as a talisman of a time and place that – regretfully – I wasn’t fortunate enough to have experienced firsthand. A watch that was both a tip of the hat to Bugsy’s Vegas and my own Queens, New York neighborhood.

I spent days searching the web for a suitable candidate. First, Chrono24. Slim pickings. Bleary-eyed but undeterred, I summoned my courage, held my nose, and dove into the eBay listings – a veritable “buyer beware” swamp of fakes, frankenwatches, and “Bombay specials.” There appeared to be two types of offerings: sadly mistreated, long-forgotten family heirlooms that looked as if they’d been subjected to an old John Cameron Swayze Timex torture test and a slew of highly suspect, over-polished cases and brightly repainted dials featuring color combinations that would cause Donatella Versace to run screaming from the room. Finally, I hit paydirt . . . 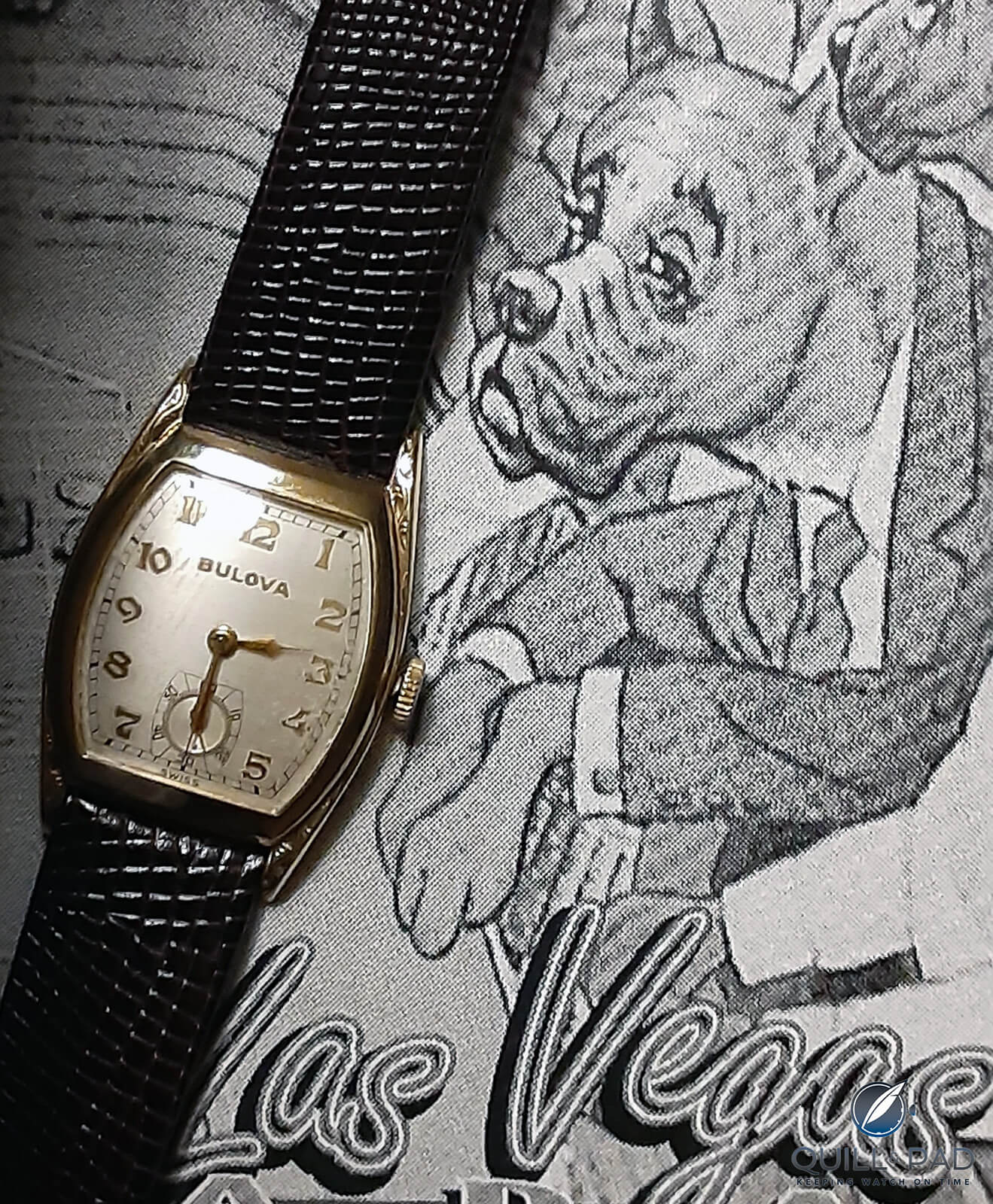 There, amongst the chaff, was a hidden gem: a 1946 Bulova Aviator “B.” Thanks to a crash course in Bulova 101, I knew that the Aviator B was something of a scarcity and highly prized by collectors. Indeed, pouring over page after page of “Presidents,” “Senators,” and “His Excellencys,” it was the only such specimen I’d found.

Featuring a beautiful tonneau case, its sharply delineated, gold-filled bezel was accentuated by broad, handsomely engraved lugs. While no one could possibly mistake it for Bugsy’s Bulova, it did boast a near-pristine, silver/white dial with impressive applied Arabic numerals and an elegant, gold-plated handset that mirrored Siegel’s watch almost to a T – a bit of shared Bulova “DNA.” 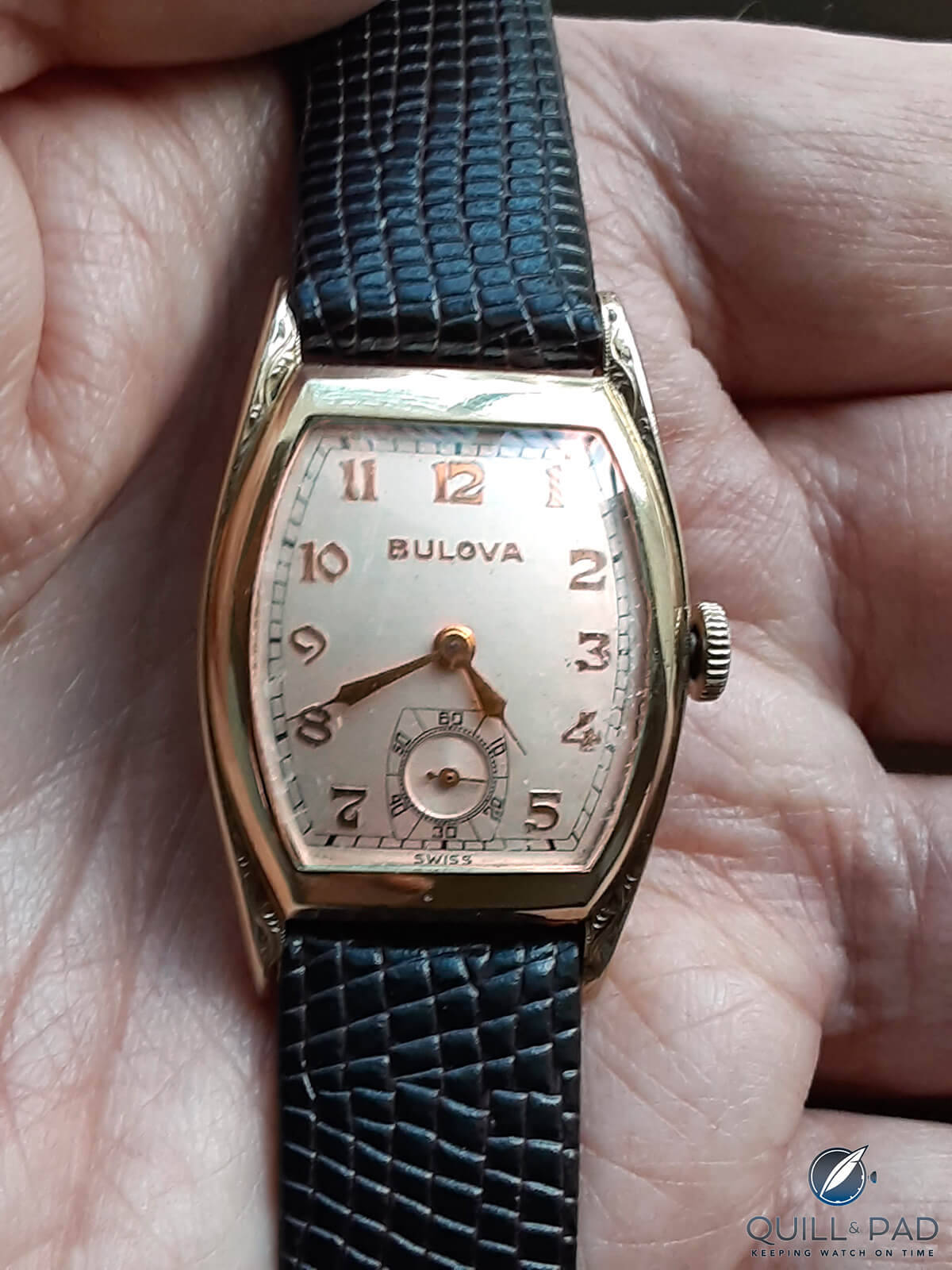 To top it all off, it was even fitted with a brown lizard skin strap, the exact type I’d planned on adding myself. Chronos, the God of Time, had truly been watching over me. The seller had posted a series of clear, nicely staged photos showing the watch from every possible angle, including a closeup of the movement: a hearty, no-nonsense manual-wind Caliber 10BC with 15 jewels – recently serviced, oiled, and installed with a new mainspring.

And the price? Extremely reasonable compared to that of some much lesser examples. So far, so good!

There’s an old adage that chastened, battle-scarred eBayers live and die by: “Buy the seller!” In this instance, a retired U.S. Army Ranger with over 5,000 sales and an impeccable 100 percent satisfaction rating. Posed for his profile pic with his two adorable children; square-jawed and wearing a red Ranger beret, I knew I’d found my man.

So what’s the final verdict now that my “new” vintage Bulova has had some wrist time? Well, let’s start with the obvious: it’s small – really small! Although the diminutive size required a bit of an adjustment period, the watch soon began to grow on me (no pun intended). It has tons of character and surprising wrist presence for a watch whose case measures just 27.1 mm (including crown) x 37.9 mm (lug to lug). Often, a whisper can be more affecting than a shout. 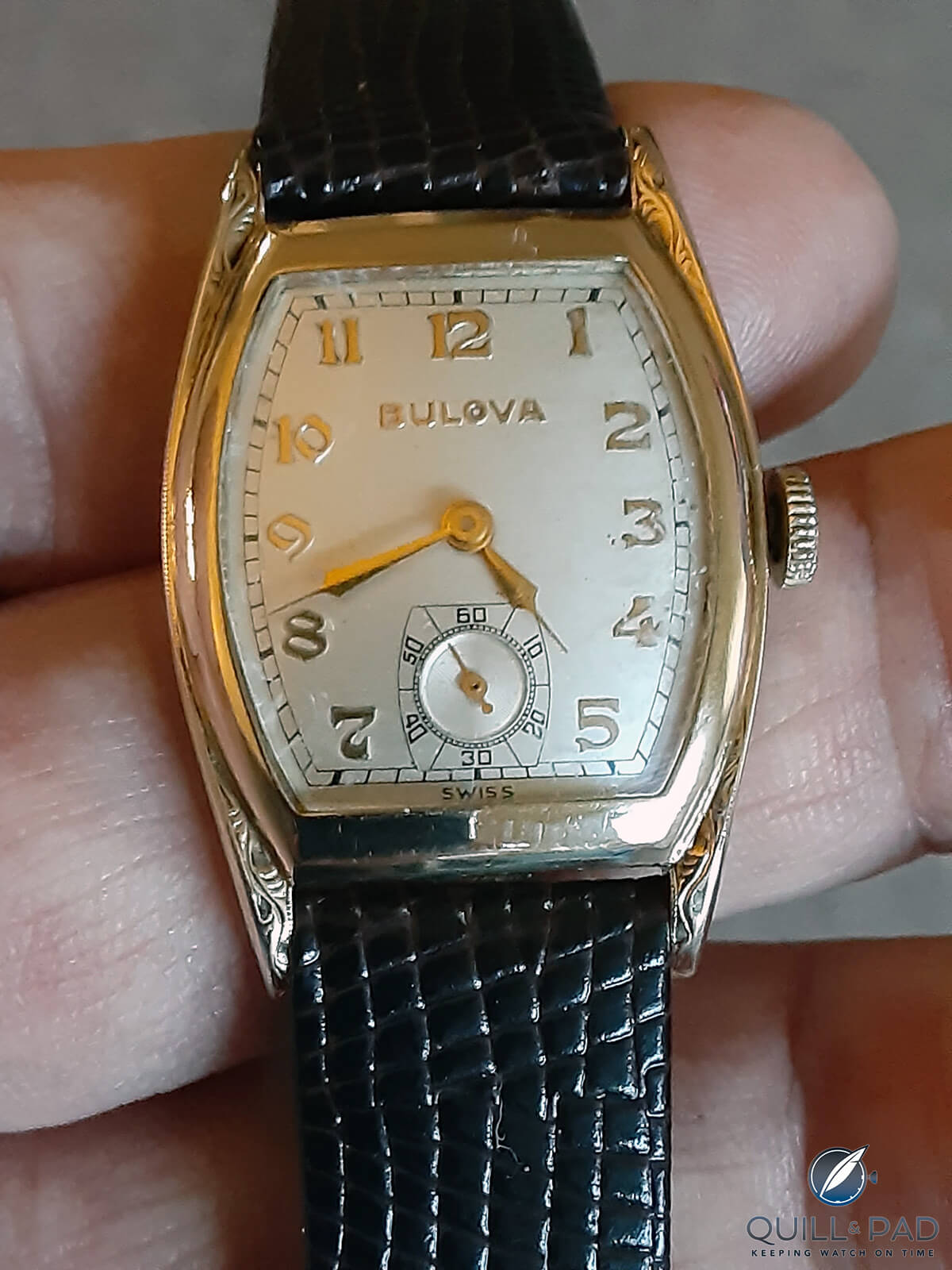 Truth is, it’s a beautiful piece, one that I often catch myself gazing at appreciatively while wearing. Not the pearl of my collection, nor a daily driver, but a watch for those special times and unique occasions – perhaps even an impromptu trip to Vegas.

Why I Bought It: Collector Quentin R. Bufogle And His 2006 Omega De Ville Chronoscope Chronograph

How, When, And Why Diamond-Set Watches For Men Were Commonly Accepted And The Importance America Played

Why I Bought It: Collector Koen Simon And His IWC Reference 504 ‘Türler’