Why I Bought It: Grönefeld 1941 Remontoire – Reprise

If you’re a watch enthusiast, you know that there are some watches you fall for the moment you see them. Sometimes that initial infatuation passes and you move on to the next temporary obsession, but then there are those instances in which the more you see, talk about, and learn about a piece and its origins the more you resolve to save up to buy one.

For me, the Grönefeld 1941 Remontoire was one of the latter. 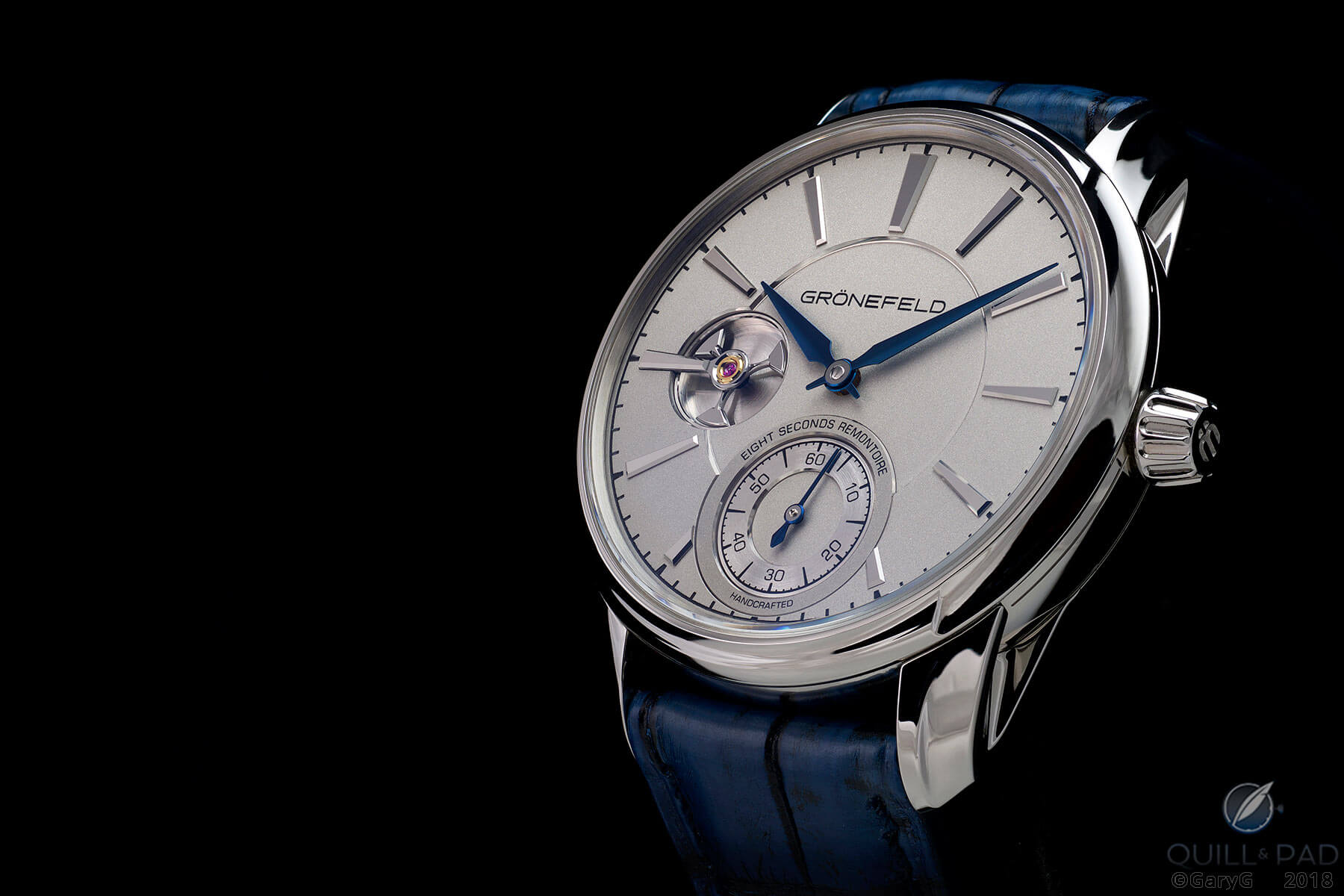 The Grönefeld 1941 Remontoire in stainless steel

Why I bought it: beginning with a brief history lesson

Once upon a time (ca. AD 700, to be more exact) there was an Irish Benedictine monk named Plechelm who traveled to the kingdom of Frisia (now the Netherlands) and founded a church dedicated to Pope Silvester in what is now the town of Oldenzaal. Around AD 950 Plechelm was canonized by Pope Agapetus II, and the church was rededicated in St. Plechelm’s honor when his remains were returned there circa AD 954. Oldenzaal, with the clock tower of the Basilica of St. Plechelm at center

Around 1150, construction of the current basilica of St. Plechelm began, and a tower (most relevant to our story) was added around 1240, heightened in the 1500s, and in 1913 ultimately equipped with its current clock made by Royal Eijsbouts. It features a 30-second remontoire mechanism that protects the clock’s escapement from the massive weights used to drive the movement, which jump the clock’s hands each half-minute to break any accumulated ice. 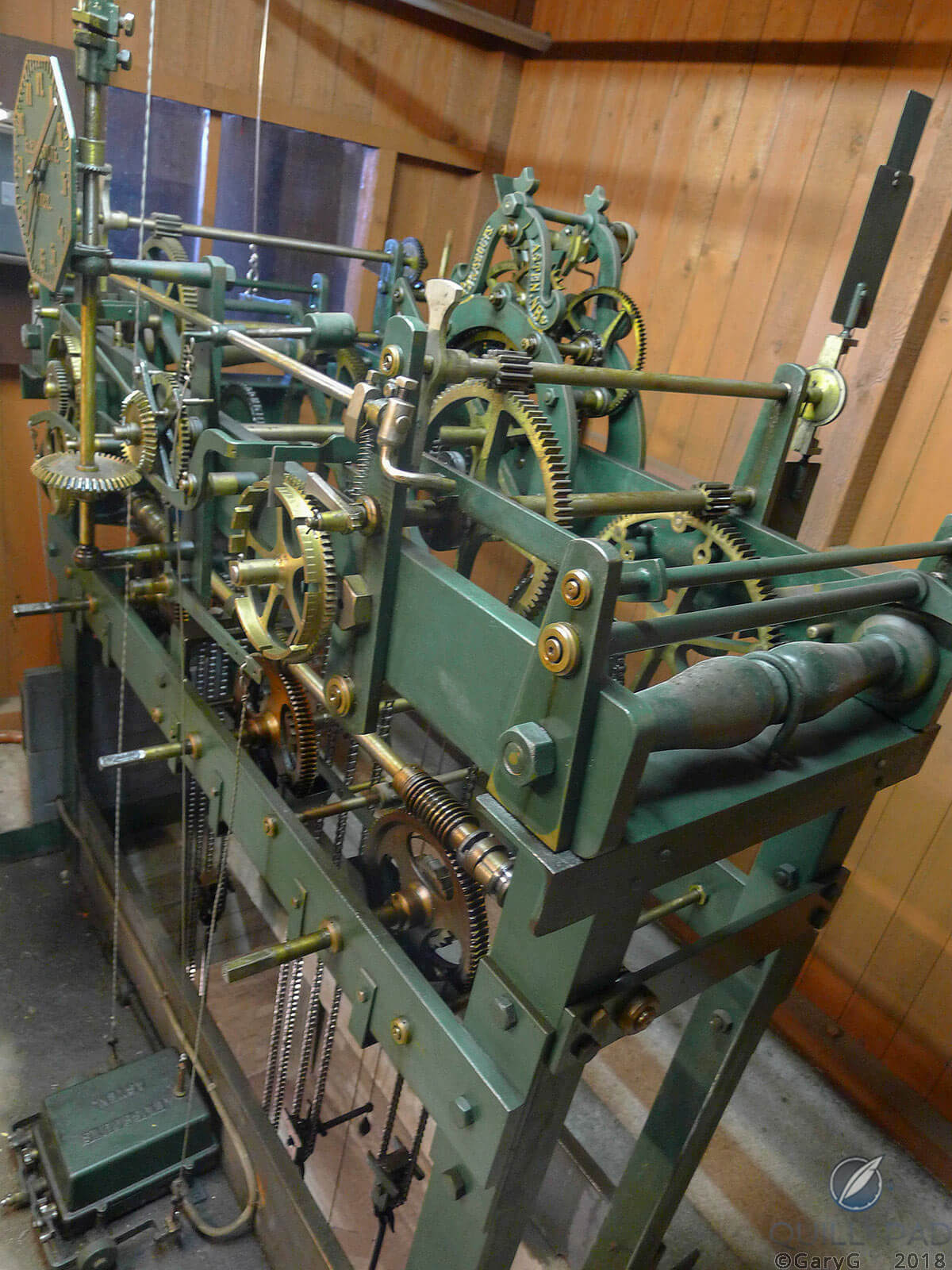 The basilica of St. Plechelm’s tower clock works, with remontoire regulator blades visible at the rear

Of course, someone had to maintain the clock and its Gillett and Johnston carillon added in 1930. That was a fellow by the name of Johan Grönefeld. 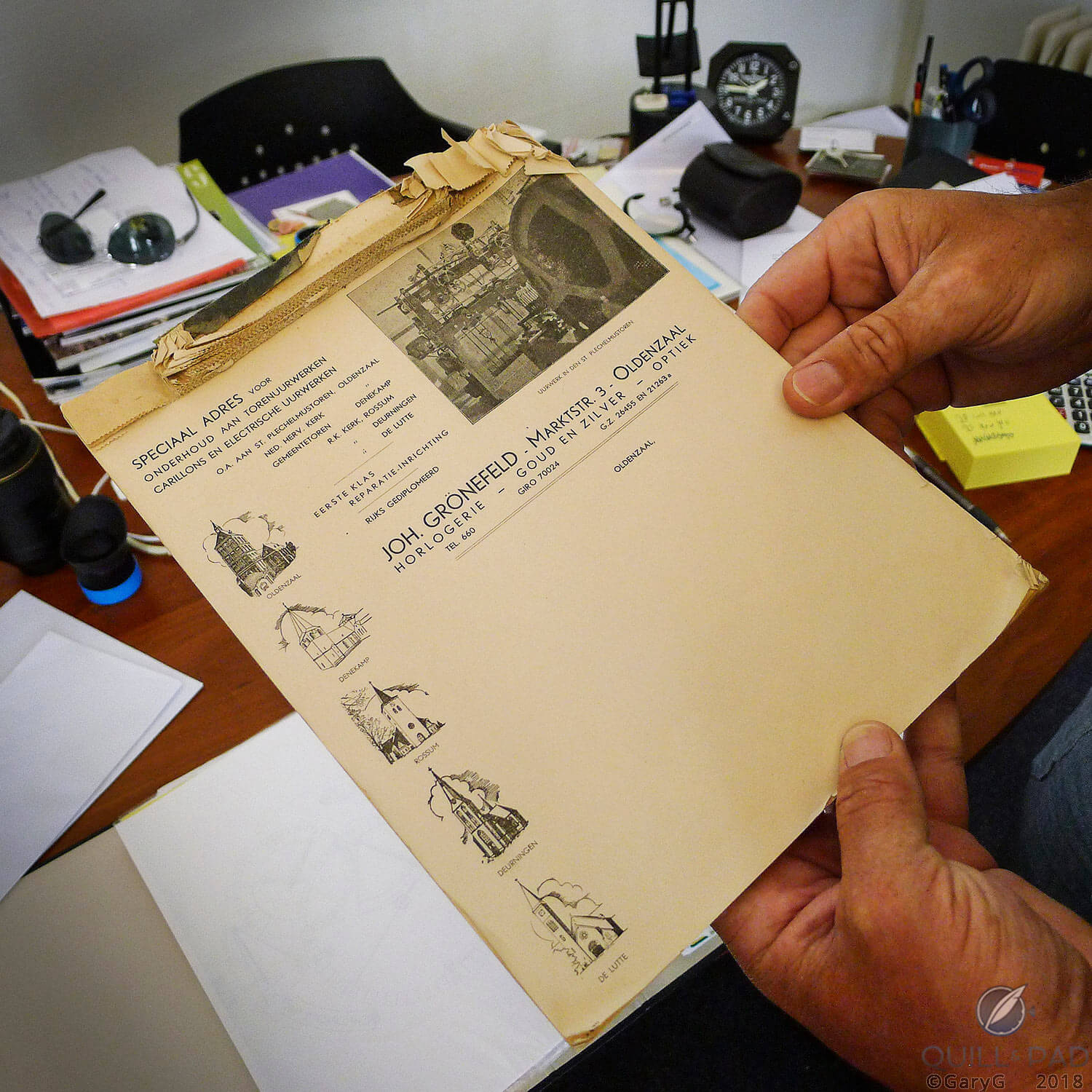 After Johan’s death his son Sjef took on this responsibility. As boys, his sons Bart and Tim grew up within earshot of the clock’s chimes and received a number of stern warnings from Sjef during their visits within the tower to stay well clear of the large swinging blades of the clock’s remontoire, which in particular made a strong impression on the younger son, Tim. 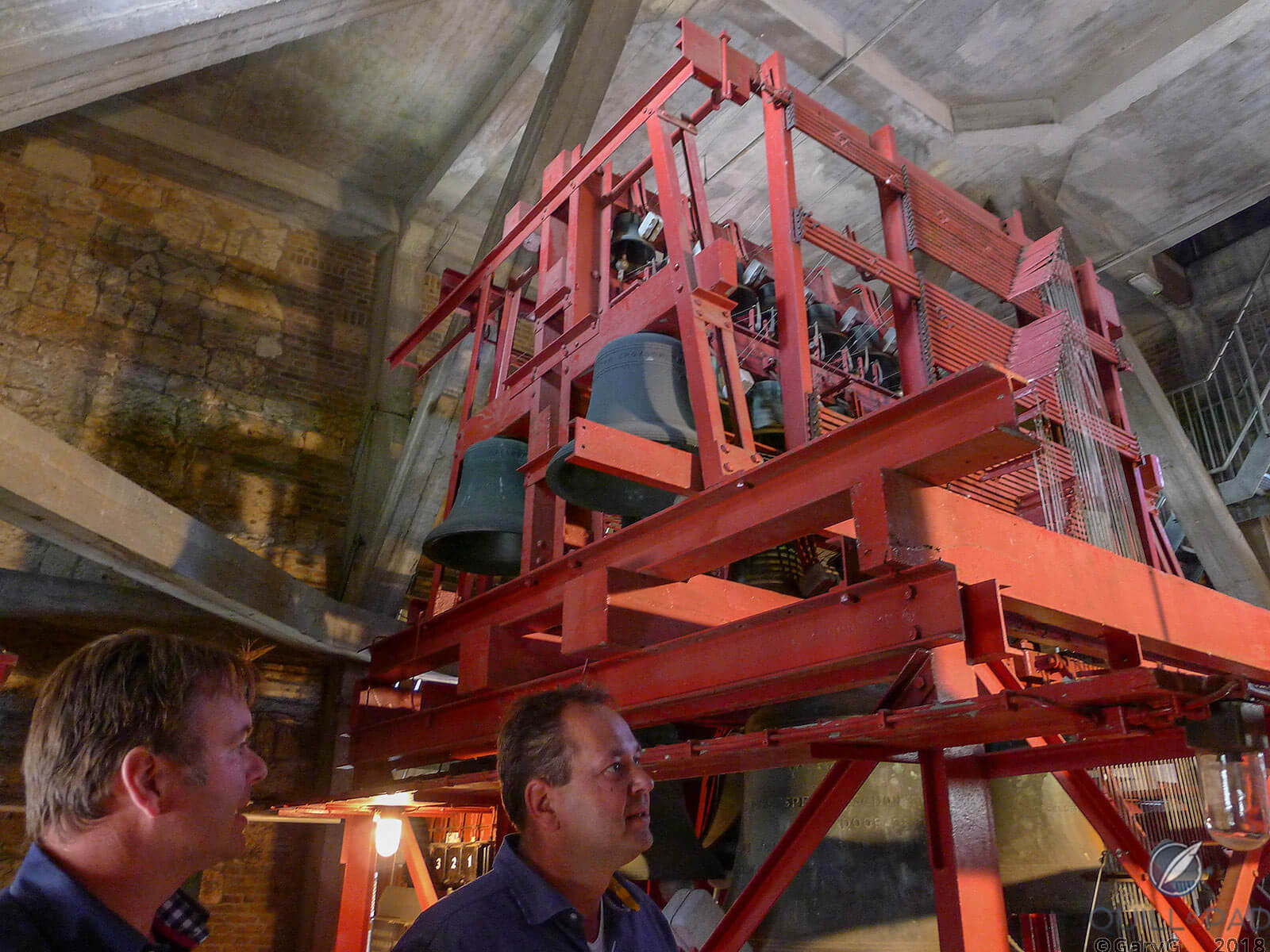 Little wonder, then, that upon deciding to launch their independent watchmaking business, Tim and Bart were immediately inspired to begin thinking about how a regulated remontoire mechanism similar to that of the Plechelm clock’s might be incorporated into a watch. And in time – and with the collaboration of brilliant movement designer Andreas Strehler – Baselworld 2016 saw the introduction of the 1941 Remontoire, so designated in honor of Sjef’s birth year. I was immediately taken by the watch when I saw it, but once I heard its origin story, and especially as I’d made the climb up the St. Plechelm tower myself a few years prior, I knew I’d eventually have to own one.

How the Grönefeld 1941 Remontoire fits in my collection

In my pal Terry’s collection taxonomy, this one is very definitely a patronage piece: one purchased to recognize the superb work being done by today’s best independent watchmakers and to support them in their creative efforts.

For me, it’s also intended to be a regular daily wearer in the same vein as my recently purchased Hajime Asaoka Tsunami. It’s for that reason that I opted for a stainless steel case and also why I ultimately decided against adding any of the extremely tasty engraved or enameled dials from Kari Voutilainen’s Comblemine dial-making operation in favor of the simpler silver dial offered at the watch’s 2016 introduction. 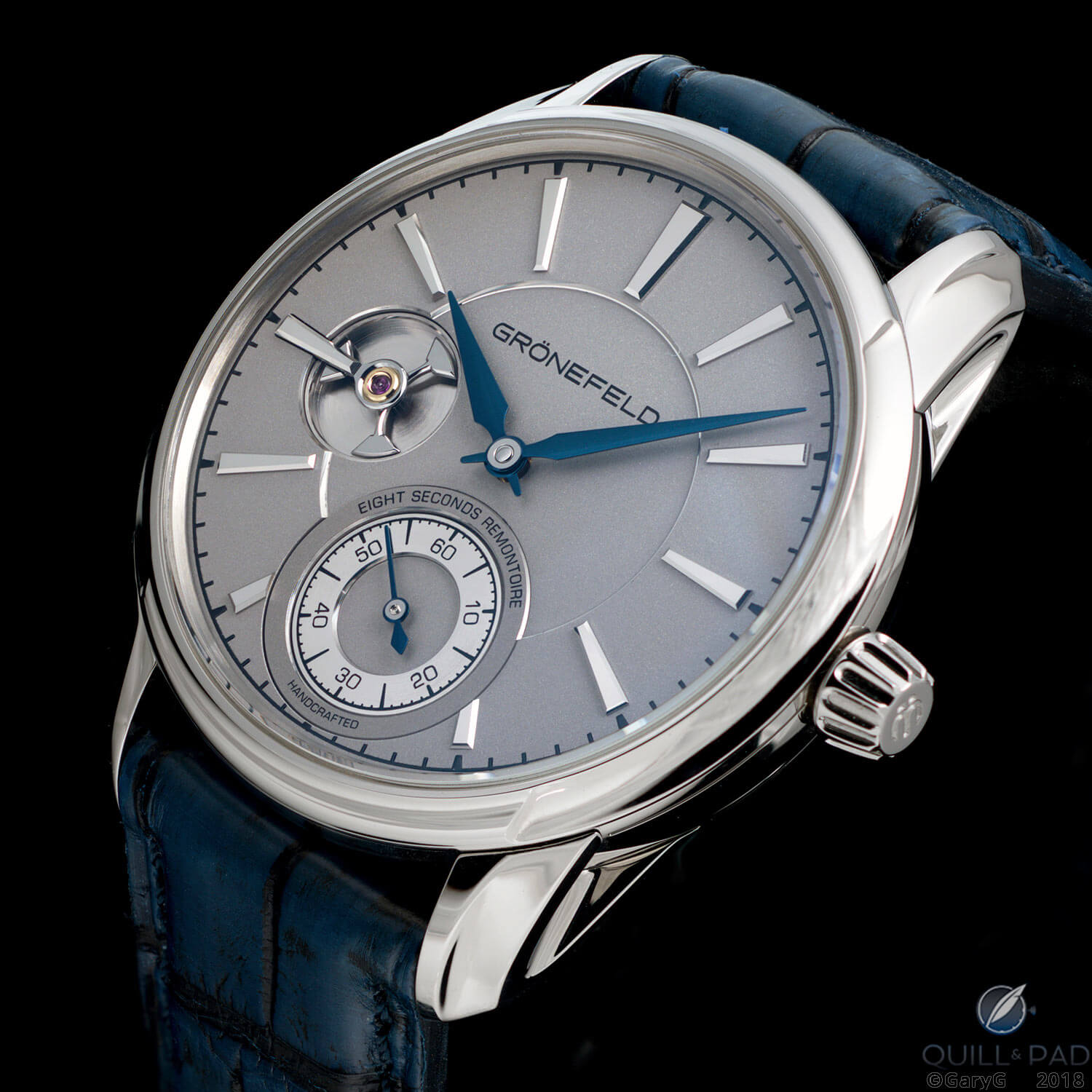 The OG: the author’s Grönefeld 1941 Remontoire with silver dial

Why I love the Grönefeld 1941 Remontoire

The story is great, and the makers are superb fellows and big talents, but things get even more interesting when you flip the watch over and see the back for the first time. 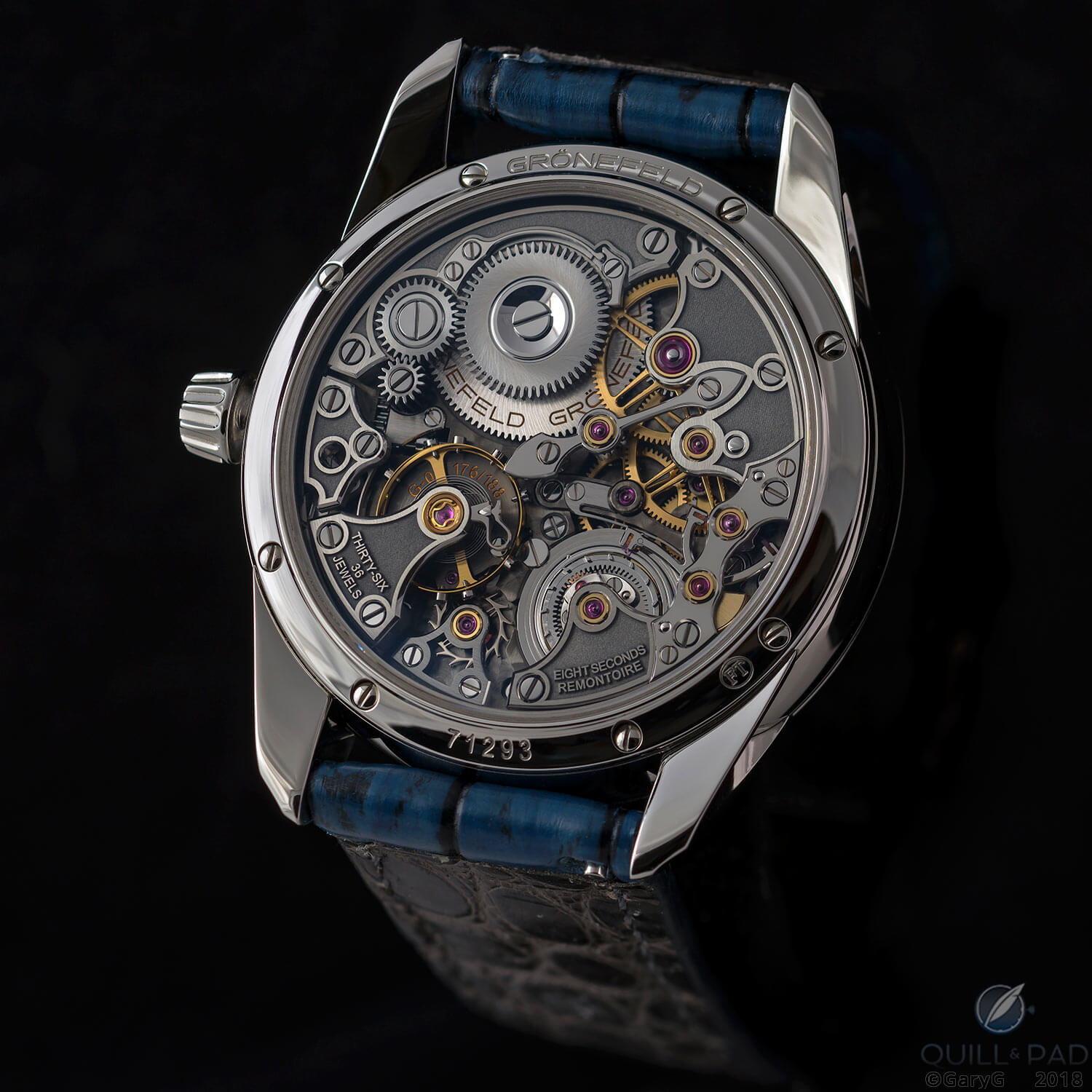 I’ve seen a couple of reviewers criticize Caliber G-05 as too busy looking for their tastes, but for me it’s just fantastic looking and a real show of mechanical and finishing virtuosity. The combination of frosting, graining, snailing, perlage, black polishing, and other techniques I’m probably missing are a feast for the eyes. And the shapes, including the several dual-spoked wheels and the bridges shaped like the “bell gable” roofs of Dutch houses, invite lengthy and repeated contemplation. The brothers’ use of stainless steel as the material for their movement bridges, while adding to the difficulty of finishing, yields a distinctive look and in my instance matches up perfectly with the tone of my steel case.

The “1941” case style (also used in the newly introduced Principia line) is itself another accomplishment, as in my opinion it is markedly more sophisticated than the first-generation case design used on the brothers’ One Hertz and Parallax Tourbillon. In the photo above, check out the swooping shapes of the lugs, including the shoulder that connects the side nearest the strap to the narrower portion of the lug that is in turn mirrored by a corresponding soft shoulder on the bezel of the watch. It also took me a little while to notice the parallel character grooves cut into the case band at the heights of the inside edges of the lug cutouts; these are not necessary, but quite elegant and effective in unifying the look of the case and lugs. 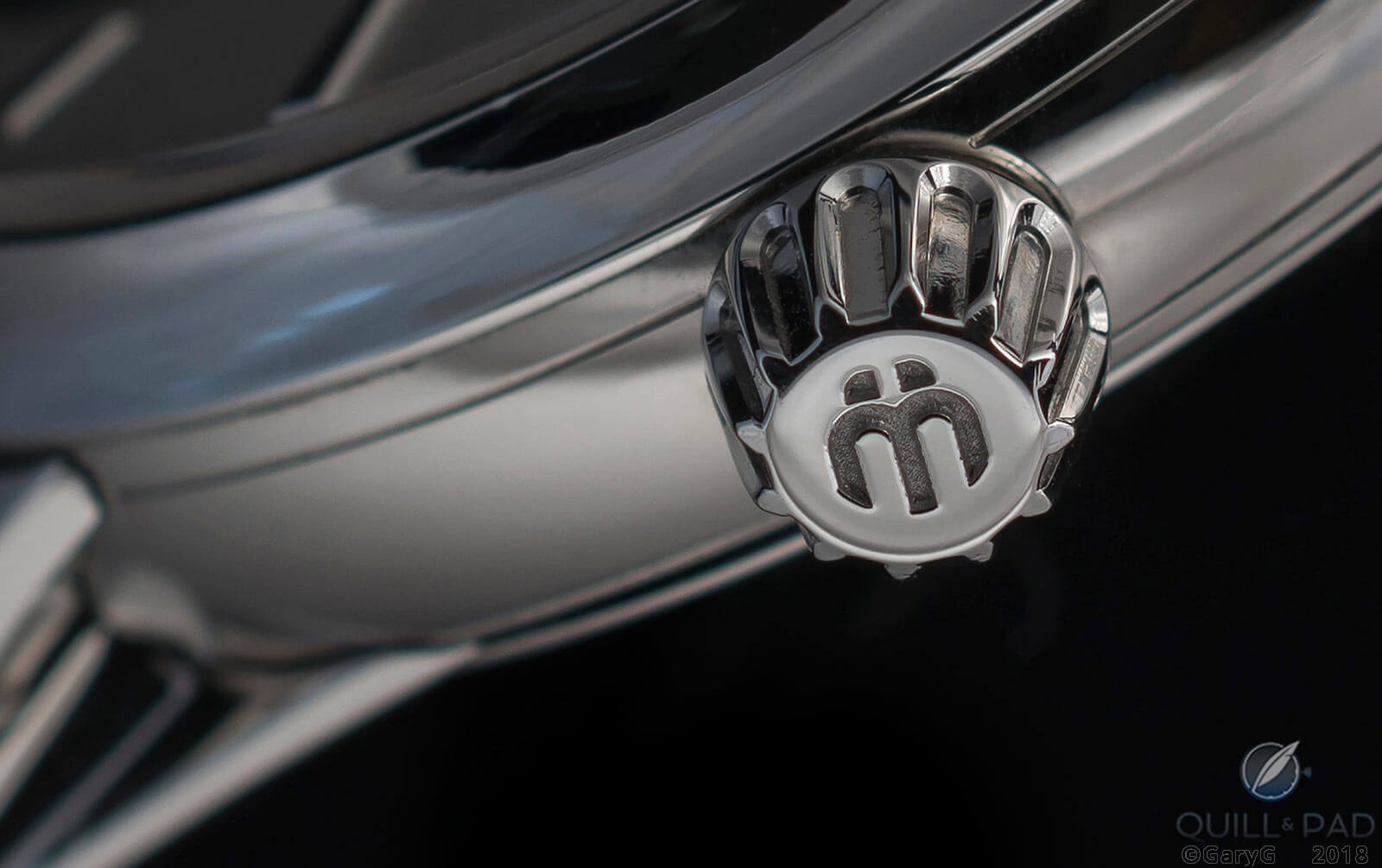 Zooming in on the crown, we see the symbol of the Grönefelds’ life and work, the etched “Horological Brothers” logo. It does seem at times as if Tim and Bart are joined at the hip! But their closeness and devotion to each other and their families is a big part of the appeal of their enterprise.

Even the buckle mirrors the design language of the rest of the watch with its bold curves and distinct shoulders. And while I’d normally say that one of the weakest compliments you can give a watch is “nice strap,” the antiqued blue strap that the brothers chose for delivery of my watch is really killer and deserves a mention. 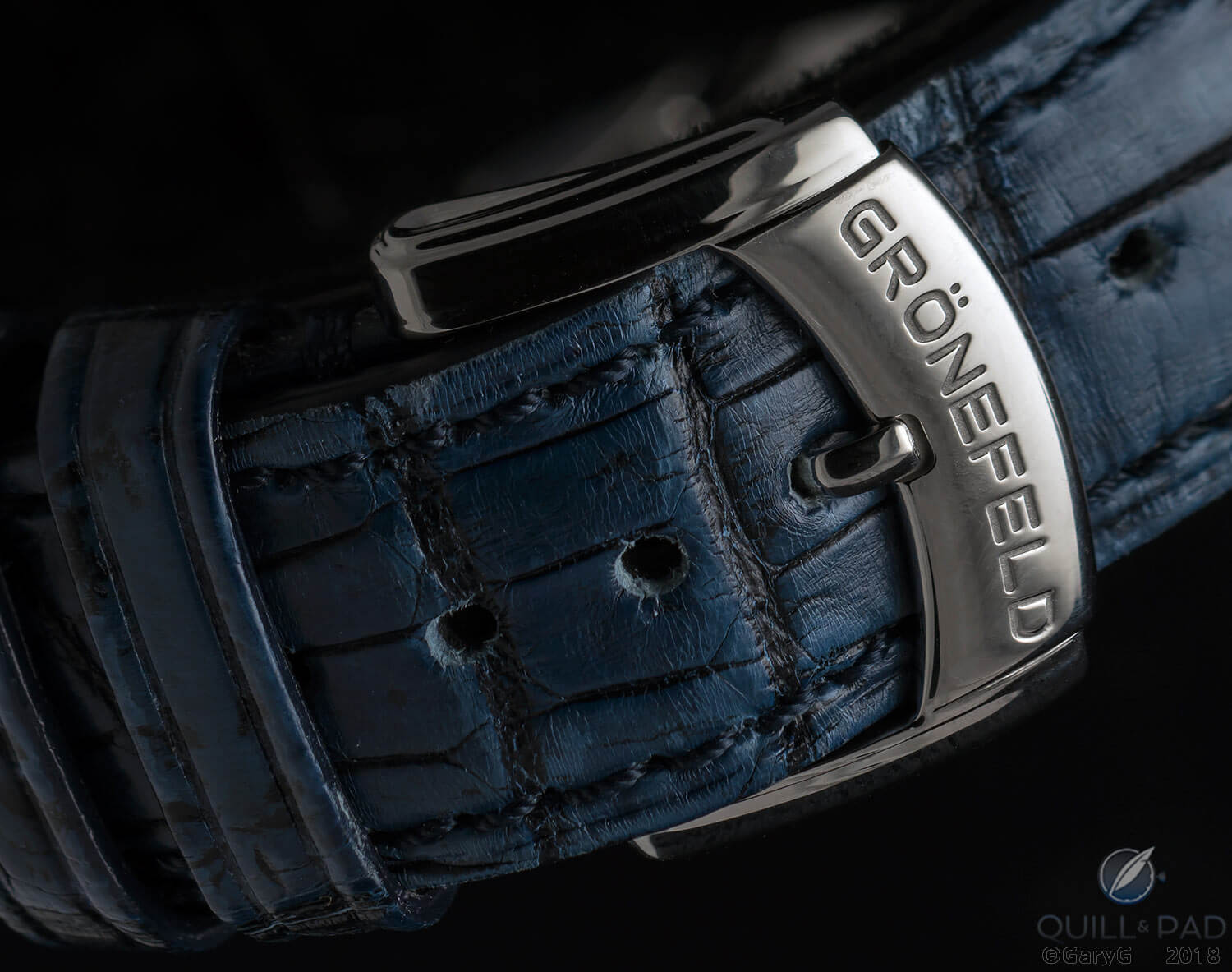 Mechanically, of course, this watch is all about the constant force mechanism itself, and I like that it is prominently featured. On the movement side, the remontoire spring cage and its associated gears seen at the right side of the photo below glide smoothly to the next position each eight seconds. On the dial side the regulator with its bridge integrated into the 9 o’clock index whizzes around on the same eight-second schedule, and on the same interval the minute hand moves forward by 8/60 of a minute in the same way that St. Plechelm’s tower clock hands move every 30 seconds – although in the case of my watch, I’m very hopeful that there will not be any accumulated ice to dislodge! Finally, there’s nothing quite like buying an independent watch! That’s especially true when the makers present it in person and a good friend is there to capture the moment. 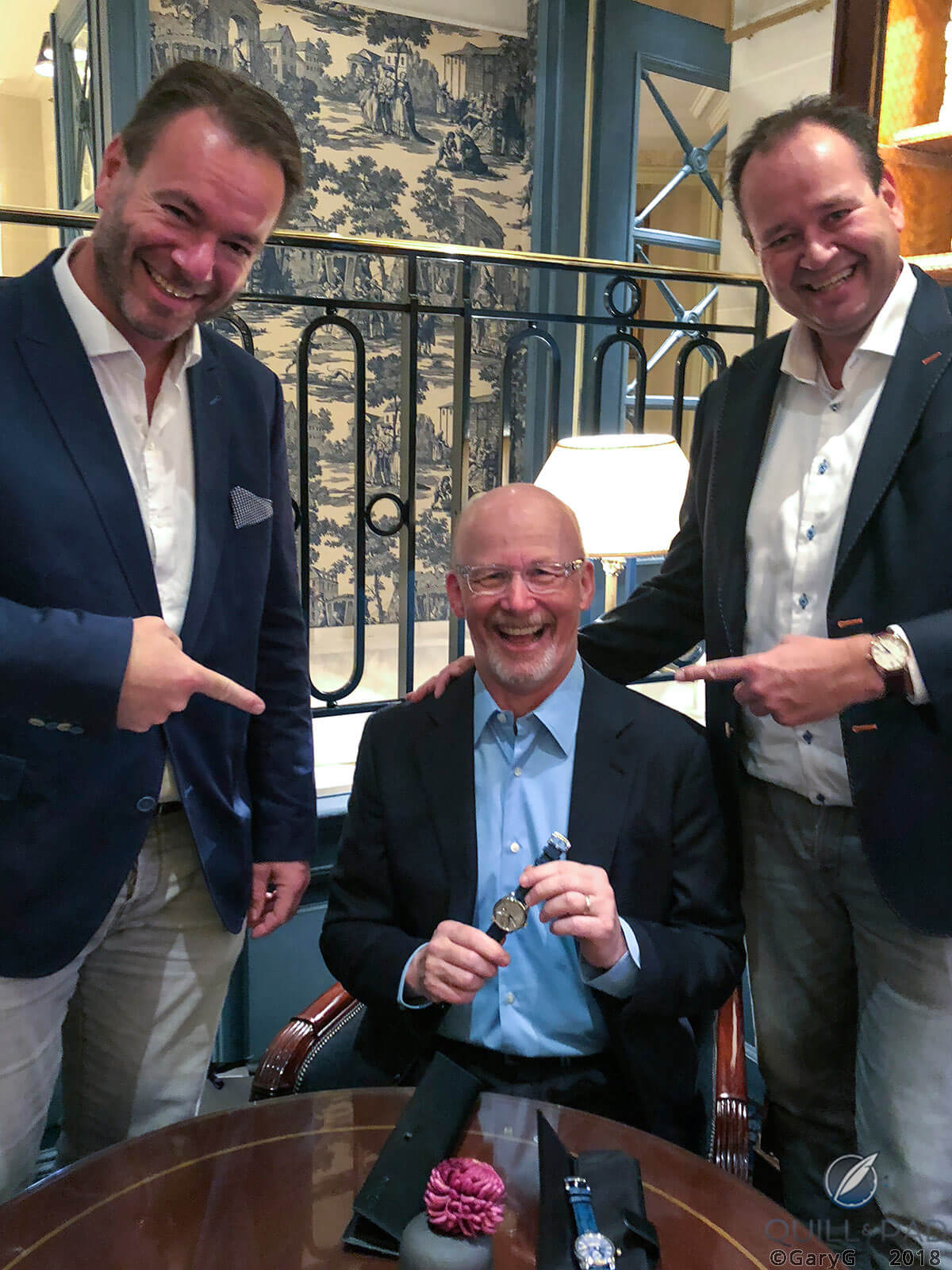 There’s obviously a lot to love about this watch, and I’m finding it tough to generate any real complaints! If I had to come up with a thought or two, they might look as follows. If you have any complaints about the 1941 Remontoire, look at this and you’ll feel better

Is it right for you?

I’ve obviously voted with my wallet, but is this watch one that you should consider? I’d say thumbs up if the following apply to you. A show each and every eight seconds: Grönefeld 1941 Remontoire

On the other hand, you might want to leave the enjoyment to me and the other owners of this watch if this applies to you.

If you are inclined to act, you should probably do so fairly soon as only 188 examples of this movement will be made, and the great majority are already delivered or spoken for.

Let me know your thoughts in the comments section, and as always happy hunting! This article was first published on January 14, 2019 at Why I Bought It: Grönefeld 1941 Remontoire.

Grönefeld 1941 Remontoire In The Horological House Of Orange

Grönefeld One Hertz – A Collector’s Journey

Flipping Watches: How To Eliminate Both Flipping And The Gray Market – Reprise