Why I Bought It: Jaeger-LeCoultre Tribute To Reverso 1931 – Reprise

Over the 20-odd years I’ve been buying “serious” watches, I’ve purchased more pieces bearing the Jaeger-LeCoultre brand name than any other, by far.

As far as I’m concerned, there are lots of good reasons for this, but perhaps what formed my early attraction was Jaeger-LeCoultre’s storied history as a developer of movements used by many other high-end brands.

The combination of clever movement design and good value for money has kept the brand relevant for me even as I’ve had the good fortune to include other premium brands and independent pieces in my collection.

Within the Jaeger-LeCoultre pantheon, one watch sub-group stands out for me: the Reverso. Between my wife and I, we’ve bought a total of seven Reverso models, and we still have five of those in our watch boxes.

Given that, why add another? In this instance, the Reverso Tribute to 1931? 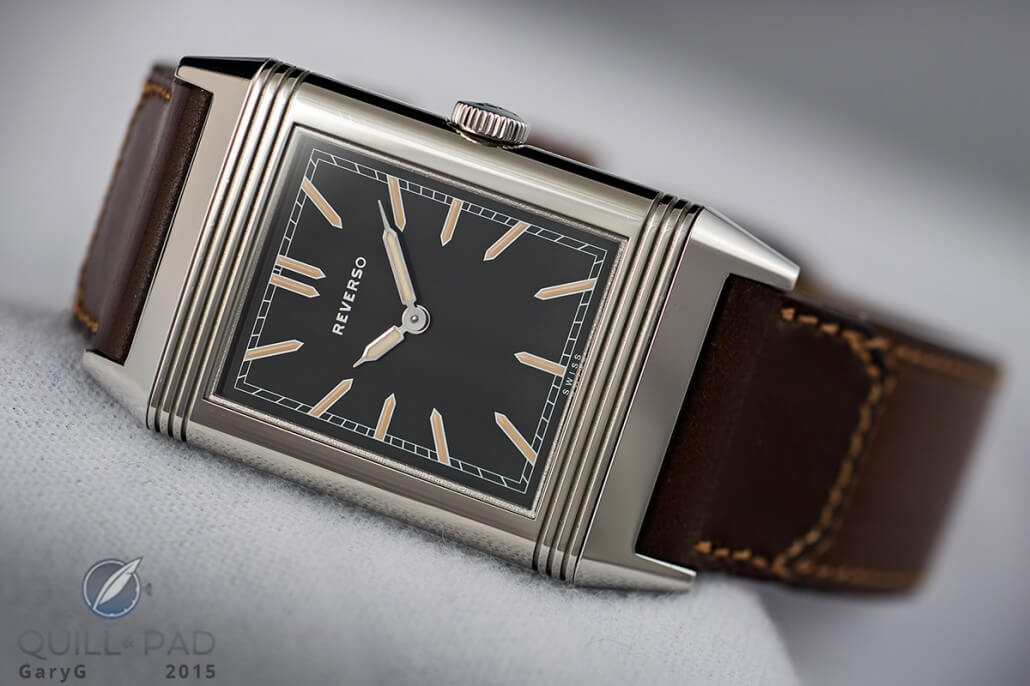 The Jaeger-LeCoultre Tribute to Reverso 1931, a U.S. limited production version from 2012

Why I Bought It

As with many of these stories, it’s about the people. In this case, Philippe Bonay, who in 2011 was named president of Jaeger-LeCoultre’s operations in the North America. As part of my first SIHH, I participated in our collector group’s private visit to the brand’s booth, and Philippe was kind enough to join us for a portion of our visit.

One of the SIHH introductions that year was the Tribute to Reverso 1931, a very handsome, ultra-thin watch commemorating the 80th anniversary of the original Reverso’s introduction.

During our discussion of that watch, Philippe mentioned, with great excitement, a project that he had underway: a limited-production version of the “TTR” for the United States market with a special combination of dial and hands. He also described another special feature of this version: a cordovan strap made by Casa Fagliano, the Argentine producer of ultra-high-end polo boots. 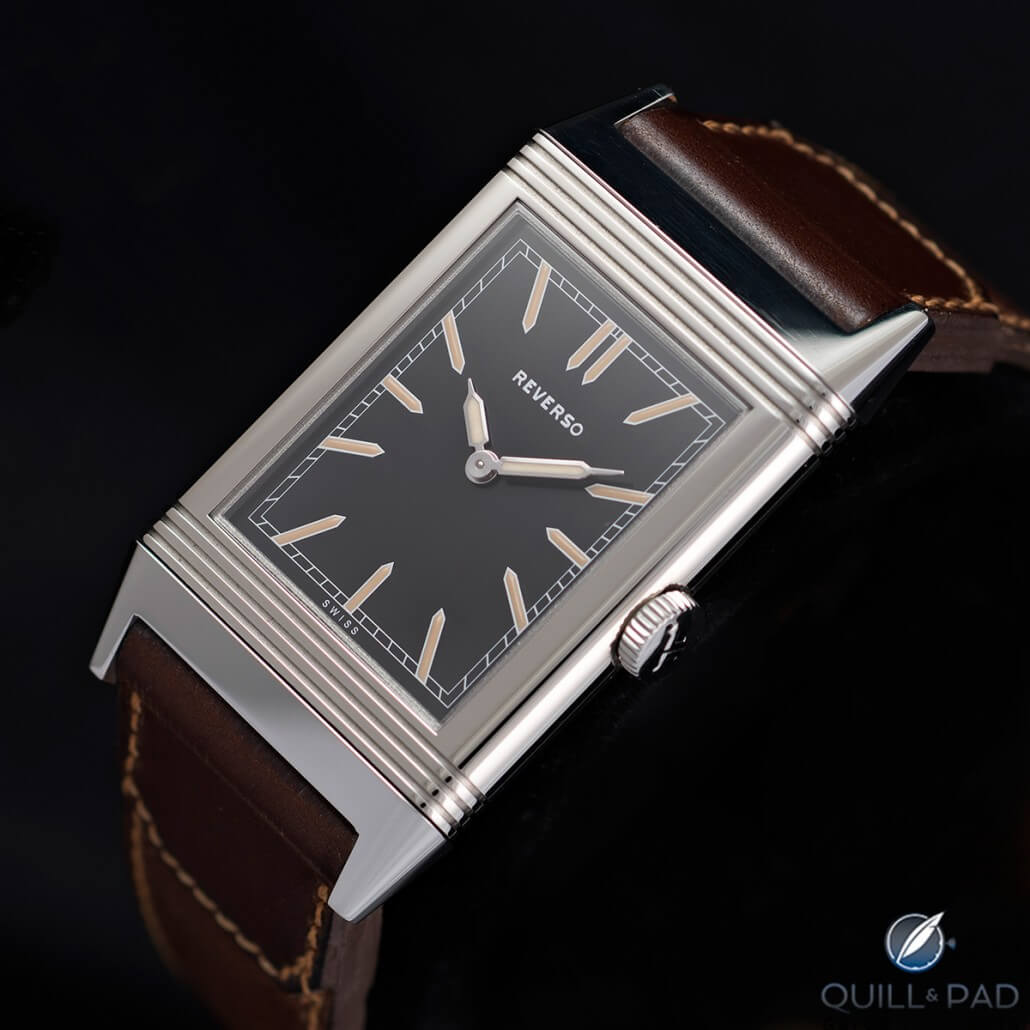 The Jaeger-LeCoultre Tribute to Reverso 1931

While I found the standard TTR 1931 beautiful, I thought the concept of the limited-production U.S. watch sounded even better. Unfortunately for me (at the time), the run of 100 watches for 2011 with a black cordovan strap sold before I could get my hands on one.

Sometimes, however, life presents us with second chances, and in 2012, Jaeger-LeCoultre announced a second series of 100 pieces, each bearing a mouth-watering dark brown cordovan Fagliano strap.

Further good fortune struck: my favorite authorized Jaeger-LeCoultre dealer received an allocation of one of these watches, and after a brief discussion it was mine. 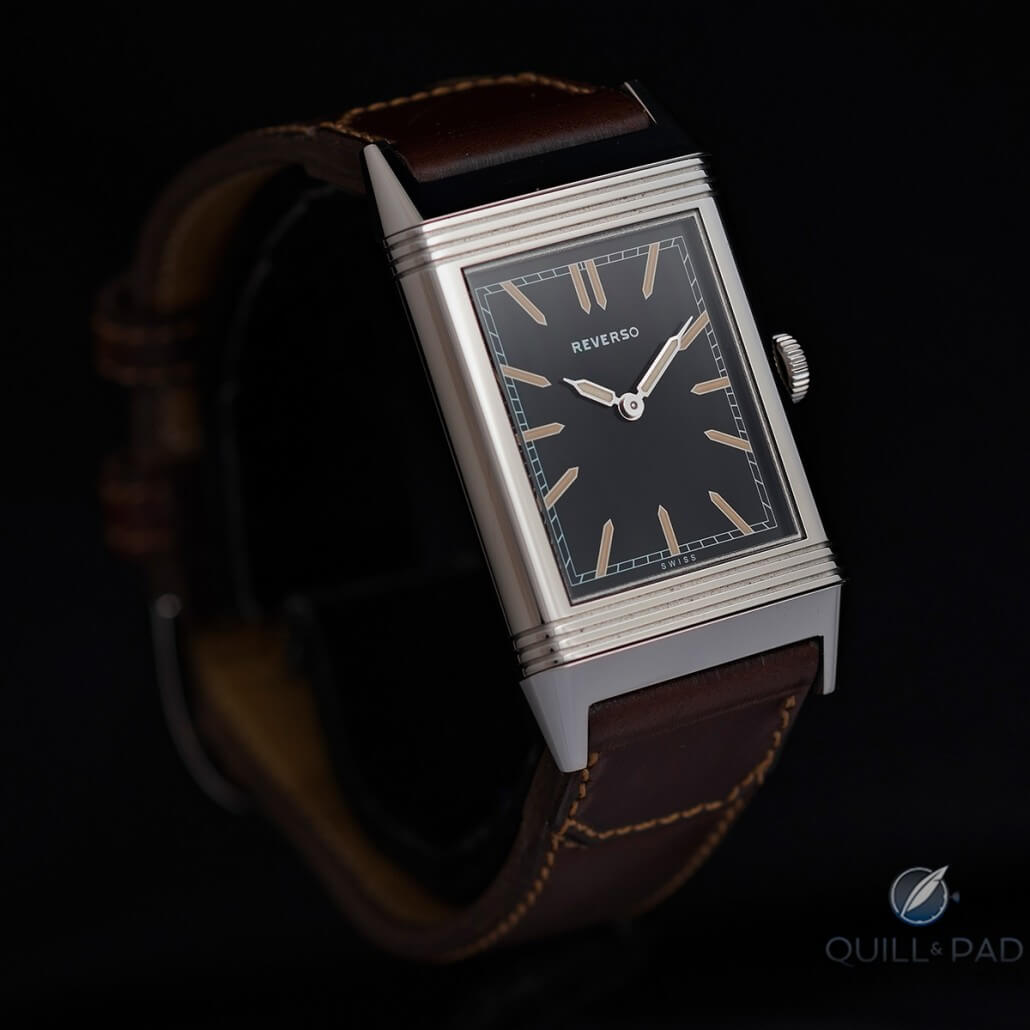 Why I Love It

For me, there are a bunch of reasons why this watch called my name in the first place and why it is a frequent wearer.

* First of all, it’s a Reverso through and through. Let’s face it: I love the Reverso! That well-proportioned rectangular shape; the three grooves at the top and bottom edges of the case; the cool flipping mechanism; even the lore about its invention to protect the fragile crystals of watches as they were worn during polo matches appeals to me.

* As an homage to the original 1931 Reverso, this piece is, if anything, even more closely linked to everything that makes a Reverso distinctive than other family models. The branding on the dial is “Reverso,” not the usual “Jaeger-LeCoultre.” And for this U.S. limited production version, even the font of the word “Reverso” is matched as closely as possible to the original 1931 watch, as is the shape of the “hypodermic” hands. 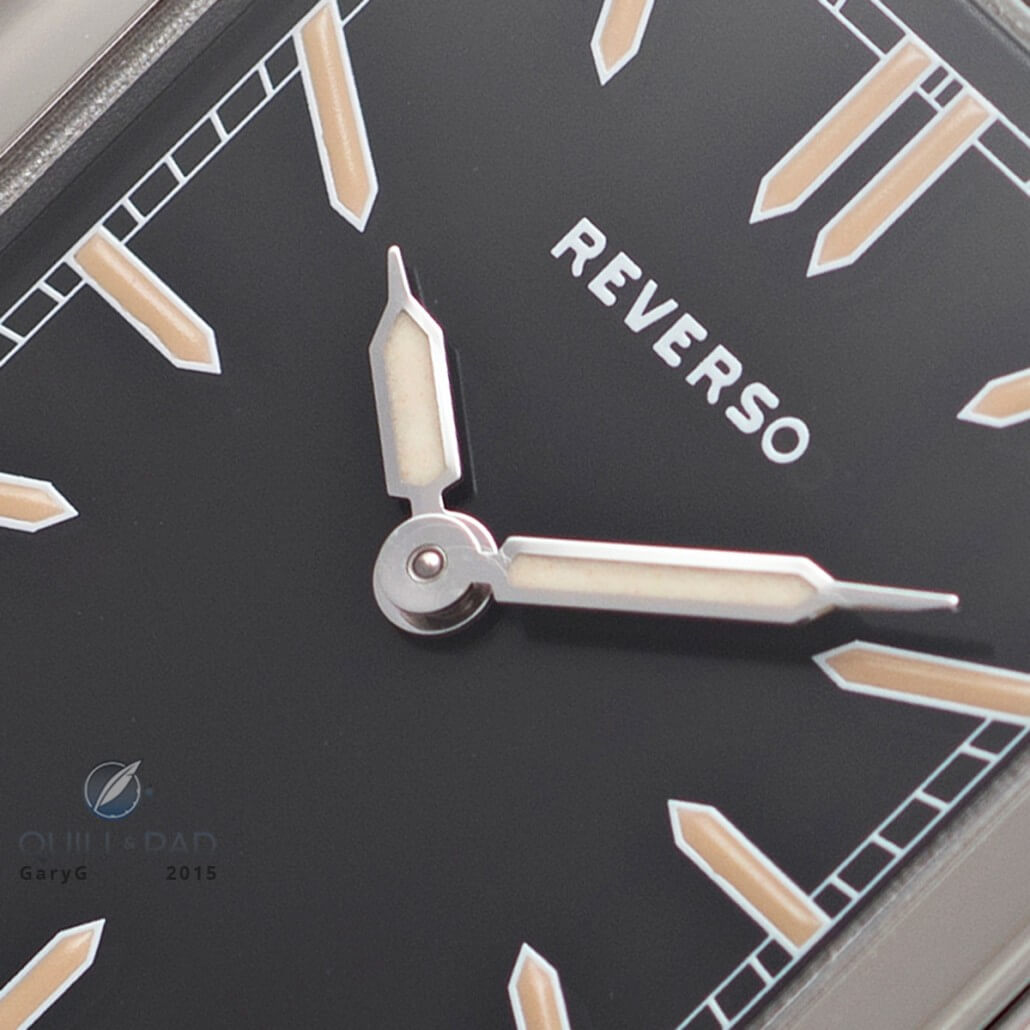 *  I like the faux patina on the hands and markers. This is a point of some controversy among Reverso enthusiasts, as some argue that the yellowish-orange look should be earned over years of slow oxidation, not bought as part of the design of a brand new watch. Perhaps I am in the minority, but I think the color choice is great, especially with the brown strap.

* Speaking of straps: the Casa Fagliano brown cordovan both feels great and looks great, and the watch also comes with a sleek matte black crocodile strap if you’d prefer a change of pace. I also plan to pair this watch with the special strap containing teal highlights that Jaeger-LeCoultre offered to benefit ovarian cancer awareness and research (see Jaeger-LeCoultre Fights Ovarian Cancer With Collector Events). 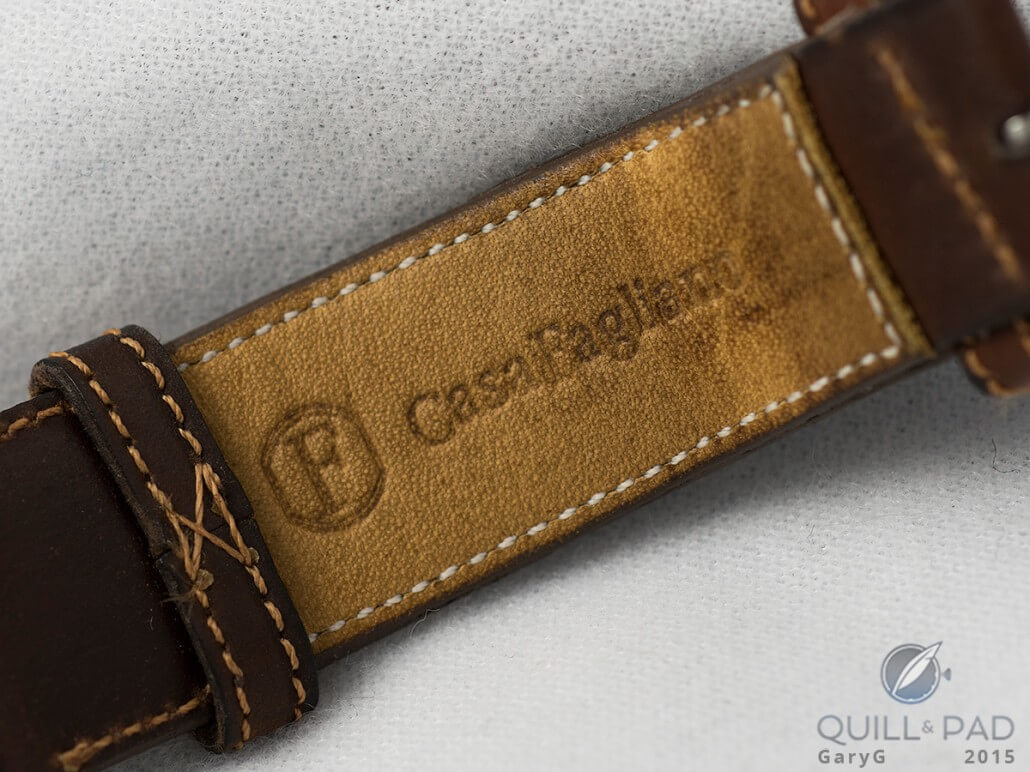 *  The stainless steel case is a winner. For me, there are some watches that just seem more natural in steel, and this is one of them. It provides a crisp look, contrasts well with the black dial, and makes the watch affordable enough that I might just convince myself to have the clean reverse side of the case adorned with some sort of personalized engraving, just like Jaeger-LeCoultre suggests! 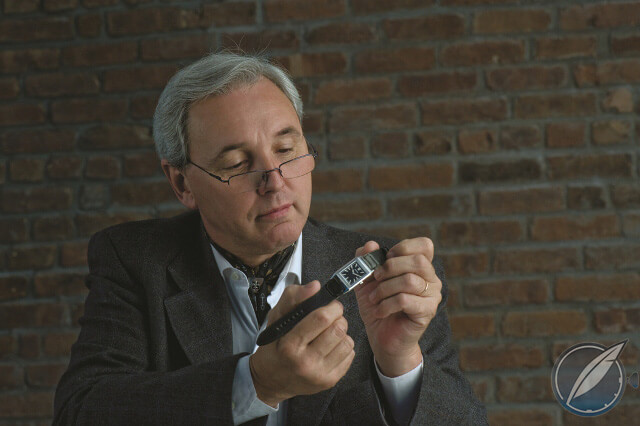 * Limited production: this watch is not a numbered limited edition, as there are no markings on the case itself that indicate the number of watches with this specific design produced or the number of this watch within the series. The only indication is on the back of the cordovan strap, where one can see the “Reverso 2012” marking branded into the leather. While I might have preferred a formal limited edition, I do like knowing that only a limited number of this specific piece were produced. 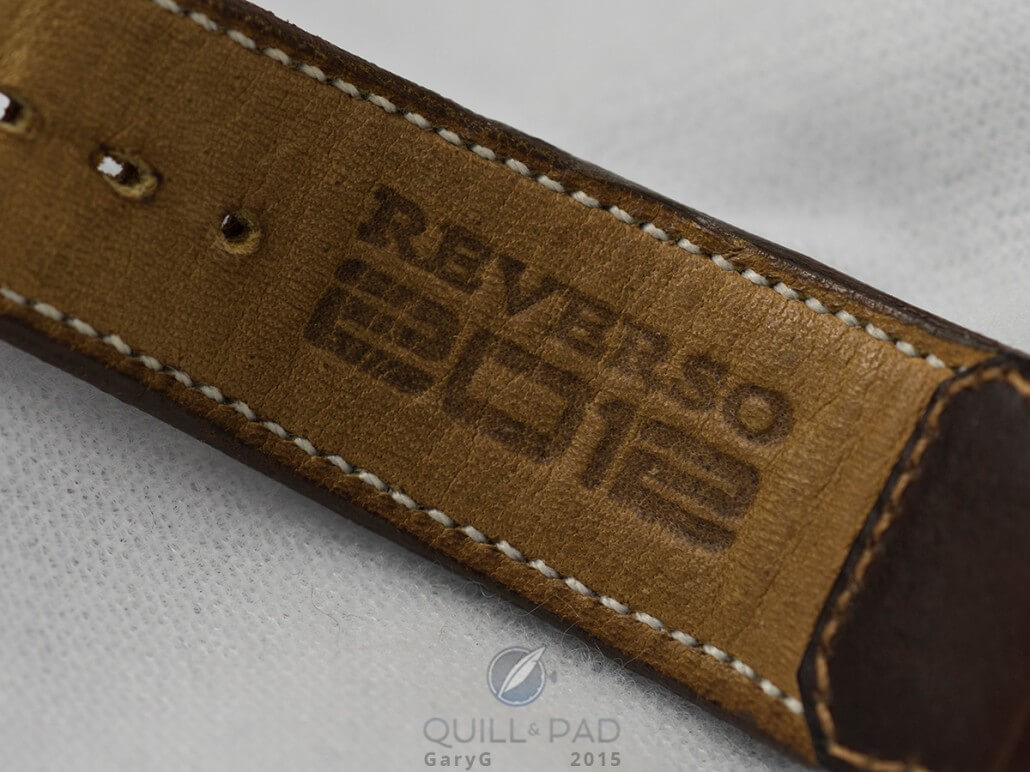 * You can’t see through the case back, but if you could your eye would be greeted by Caliber 822, which is shaped to the dimensions of the watch. I am enough of a purist that I really don’t like “form watches” such as rectangular and tonneau-shaped cases that contain round movements. The use of true “form movements” by Jaeger-LeCoultre, including the one in this watch, is a significant plus for me.

* Having exercised our x-ray vision to visualize the movement that ticks away inside, let’s return to the exterior aspects of this watch, starting with its thin profile. The “ultra-thin” designation applied by Jaeger-LeCoultre to this watch is accurate, in my view, and I find the resulting proportions of this watch really pleasing to the eye. 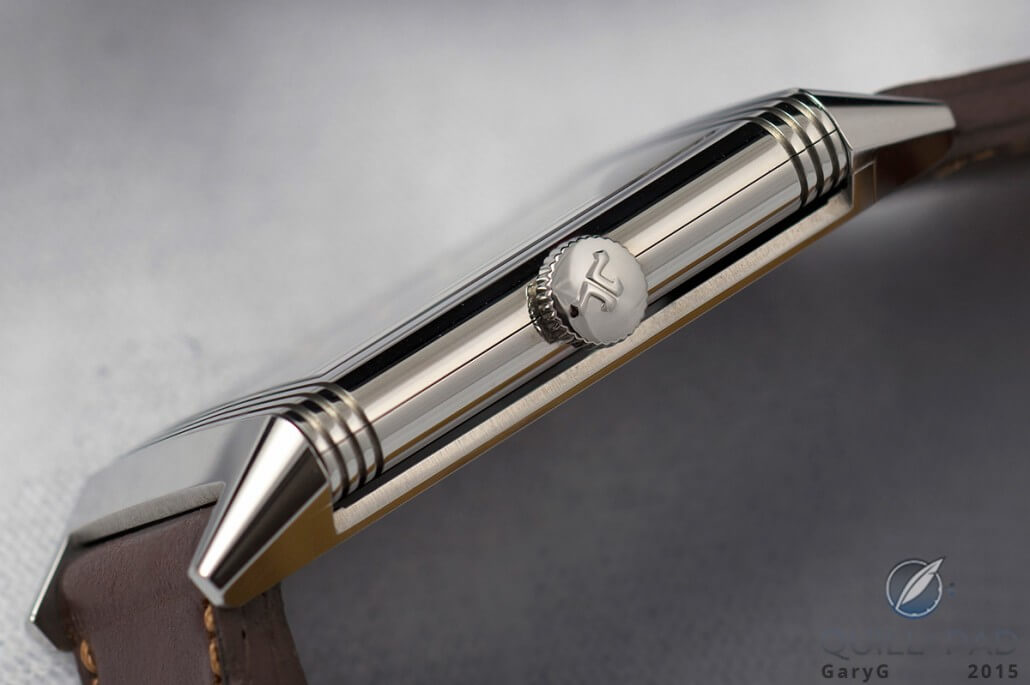 Thin is in: side view of the Jaeger-LeCoultre Tribute to Reverso 1931

* As a result of all of this, the watch wears really well: on my wrist, and on the wrists of the many owners who rave about this watch and post the huge volume of wristshots of it that appear online. If you’ve never had a Reverso on your wrist, or perhaps never even seriously considered a rectangular watch, I encourage you to try one of the variants of this “ultra-thin” line; you may well be surprised at how great it looks on you. 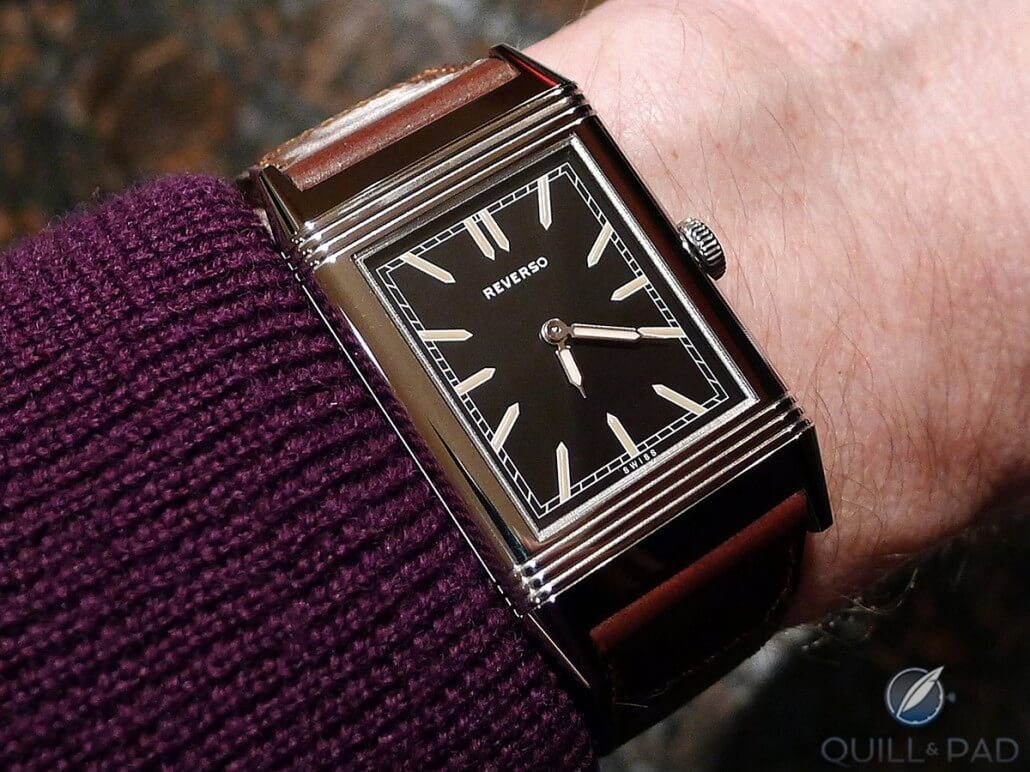 * Back to the start: it’s all about the people! While there are a lot of watches one could wear that elicit interest or even admiration, what I’ve found is that this is a watch that inspires friendship. Whether in virtual online communities or in-person enthusiast get-togethers, people seem to like this watch in a fundamental way, and that leads to more of the connections and conversations that make watch enthusiasm such a great hobby. 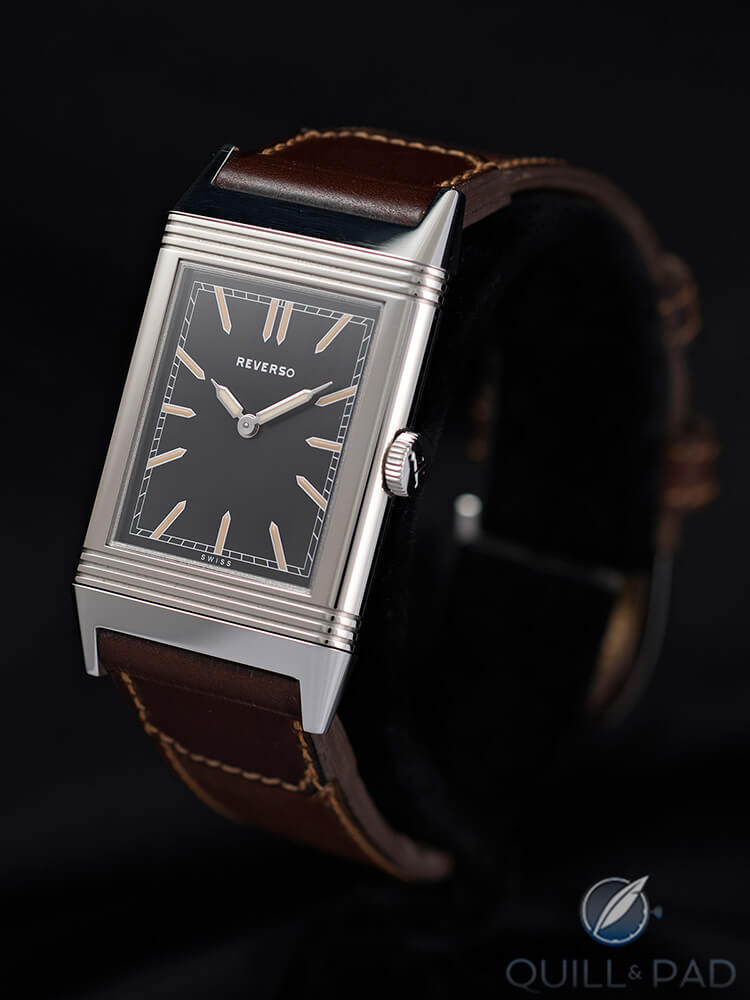 Is It for you?

I bought it, but is this one right for you? You might want to consider it if:

* You are a collector of Reverso models; then again, I can easily imagine this or any of the Tribute watches being a first Reverso, a first rectangular watch, or even a first Jaeger-LeCoultre for many people.

* In the case of the U.S. limited production series, if the idea of owning something a little different and limited in numbers appeals to you.

* You love the look and the clear references to the heritage of the Reverso line.

* You’ve always been tempted to have the case back of a Reverso engraved and are looking for a good candidate. 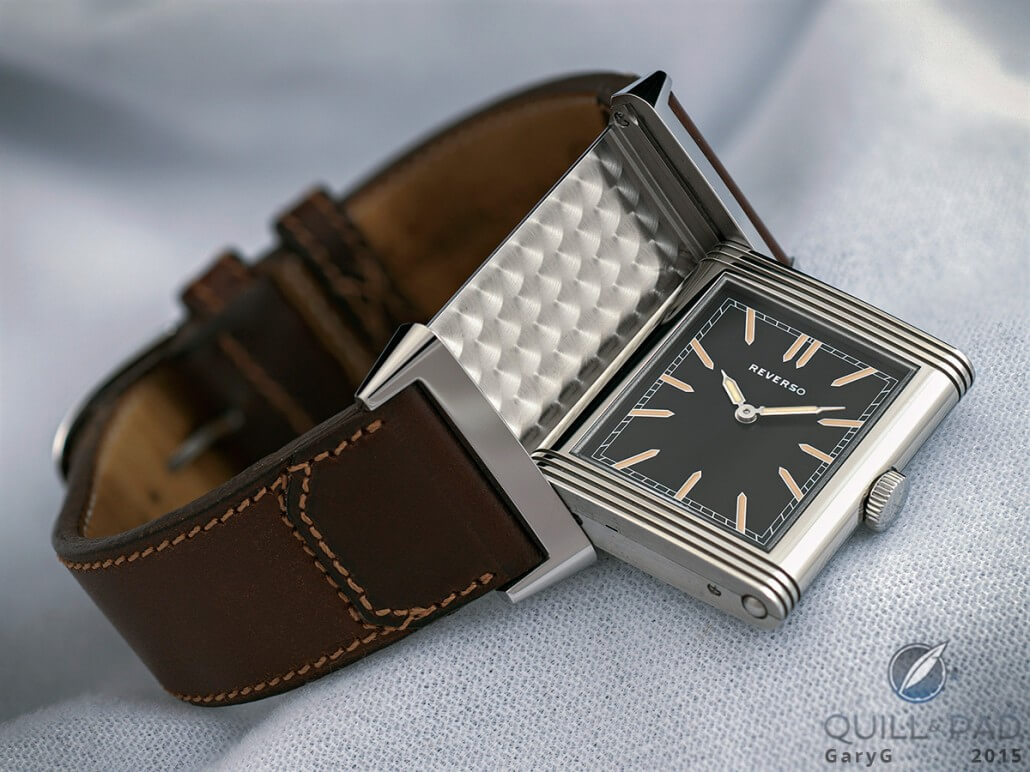 Flipping out: the Jaeger-LeCoultre Reverso case in action, with perlage base decoration visible

For once, I am struggling a bit to come up with reasons not to buy! Unless the entire Reverso concept leaves you cold, or you have confirmed for yourself that the rectangular Reverso case just doesn’t fit your wrist, the only thing that might give you pause would be that faux patina on the U.S. version. If that’s the case, you can always select the standard TTR 1931 or any of the other Reverso Tribute watches, of course. 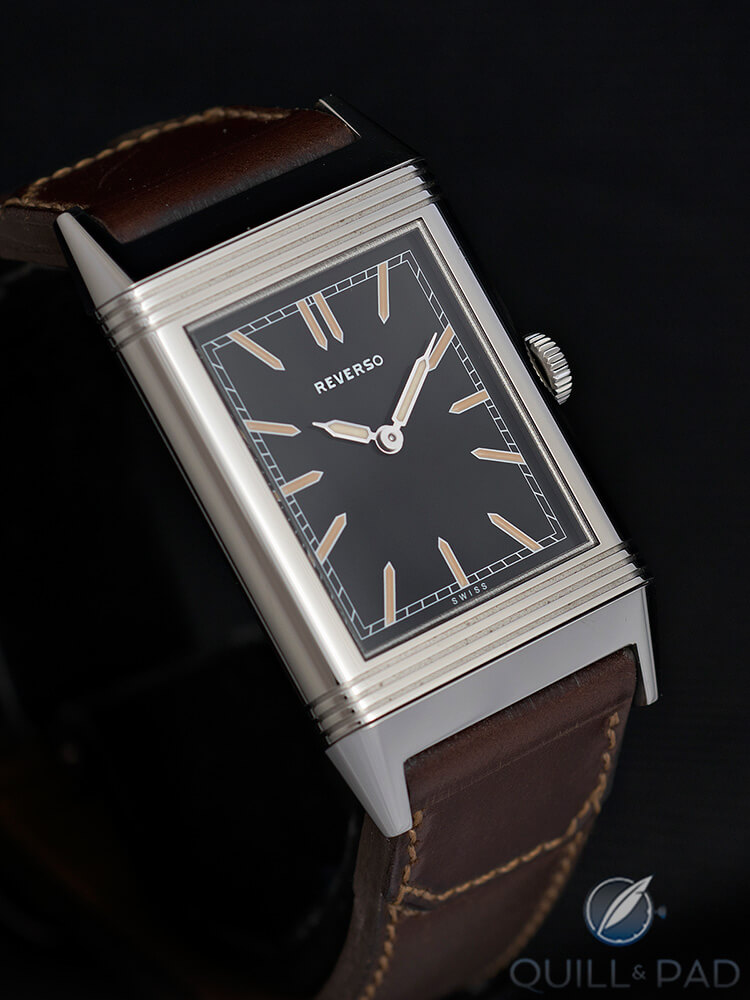 There are lots of hyper-expensive watches out there, many of them true objects of desire. But not all great watches need to break the bank! For me, the Tribute to Reverso 1931 is one of those happy examples of a watch that is accessible to many potential buyers and is also a splendid piece in its own right.

* This article was first published on January 14, 2015 at Why I Bought It: Jaeger-LeCoultre Tribute To Reverso 1931.

Why I Bought My Wife An Engraved Jaeger-LeCoultre Reverso Classique

Ulysse Nardin Freak S: Taking Freaky Back Toward Its Roots