Why I Bought It: Omega Speedmaster Speedy Tuesday 2 Ultraman – Reprise

We do tend to make life choices for very different reasons, but when it comes to watches such choices are a whole different story. Some say watches are all about emotions, and though recently those emotions seem to often be mistaken for making profit (I’m talking to you, flippers) I still believe buying an item as superfluous as a mechanical watch takes more than cold calculation and a simple will to spend . . . or earn for that matter.

Unlike George Clooney, when I was a kid I did not look up to the sky and dream about being an astronaut. In Poland, space missions were more fantasy than reality (not to mention that I was born quite some time after the last one).

For me, it was all about sport – football, to be precise (or soccer for those reading across the pond). I played, watched, cheered, and wanted to be a professional player, which . . . . never happened, not very surprisingly.

About the only point of intersection between my childhood dreams and those of Mr. Clooney was that they were made of round objects of desire, although these objects were of very different natures. Frankly, a “dream” of space never actually arrived for me. But with age that bright object up in the sky began to fascinate me more and more. To no one’s surprise (you’re on a watch website after all) most of my primary knowledge about space and the moon came along with knowledge gained of the Omega Speedmaster. 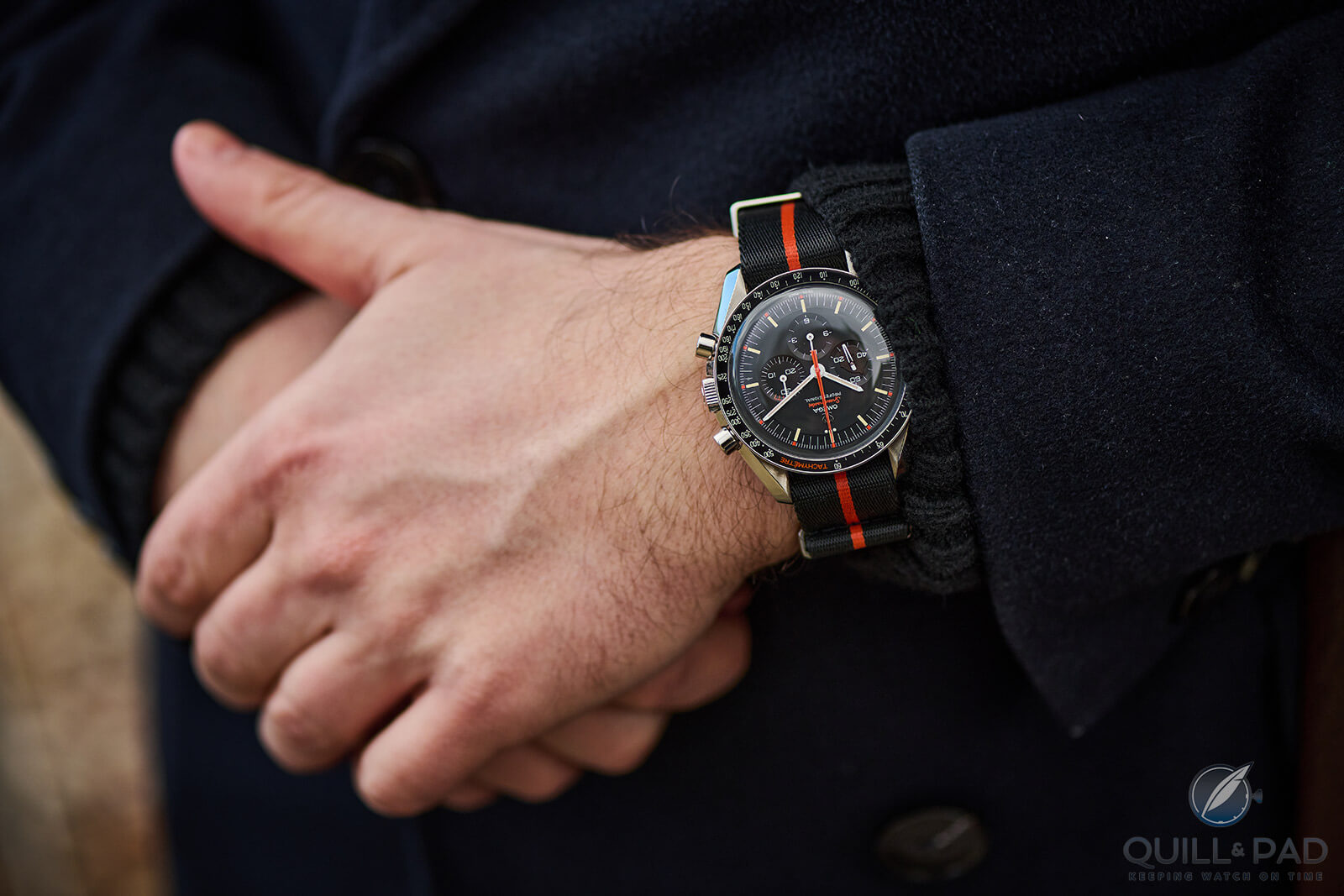 As you probably well know, back in 1969 when the first NASA spacecraft approached the moon and a man (specifically Neil Armstrong) stepped onto its dusty surface, he was wearing an Omega watch on his wrist. Well, technically speaking it was not on his wrist as Armstrong had left his watch in a lunar module, so it was Buzz Aldrin’s Speedmaster that ended up being the first watch ever worn on the moon.

History was made and an icon was born. Perhaps even more so in 1970, when a Speedmaster flew to space aboard Apollo 13. And if it hadn’t been for the watch and its chronograph to help calculate the moon looping that became necessary following a technical accident, the mission would have probably ended in (more) drama.

Not only did a wrist-worn mechanical chronograph prove to be functional and useful, it also quickly became a cult object. A cult to which, funny enough, I was and am quite immune. But every rule has its exception as I found out.

Omega and Fratello Watches came out with their first #SpeedyTuesday Speedmaster edition back in 2017. This limited edition watch honored a group of true Speedmaster fans united under Fratello’s Speedy Tuesday initiative and sold out within few hours. 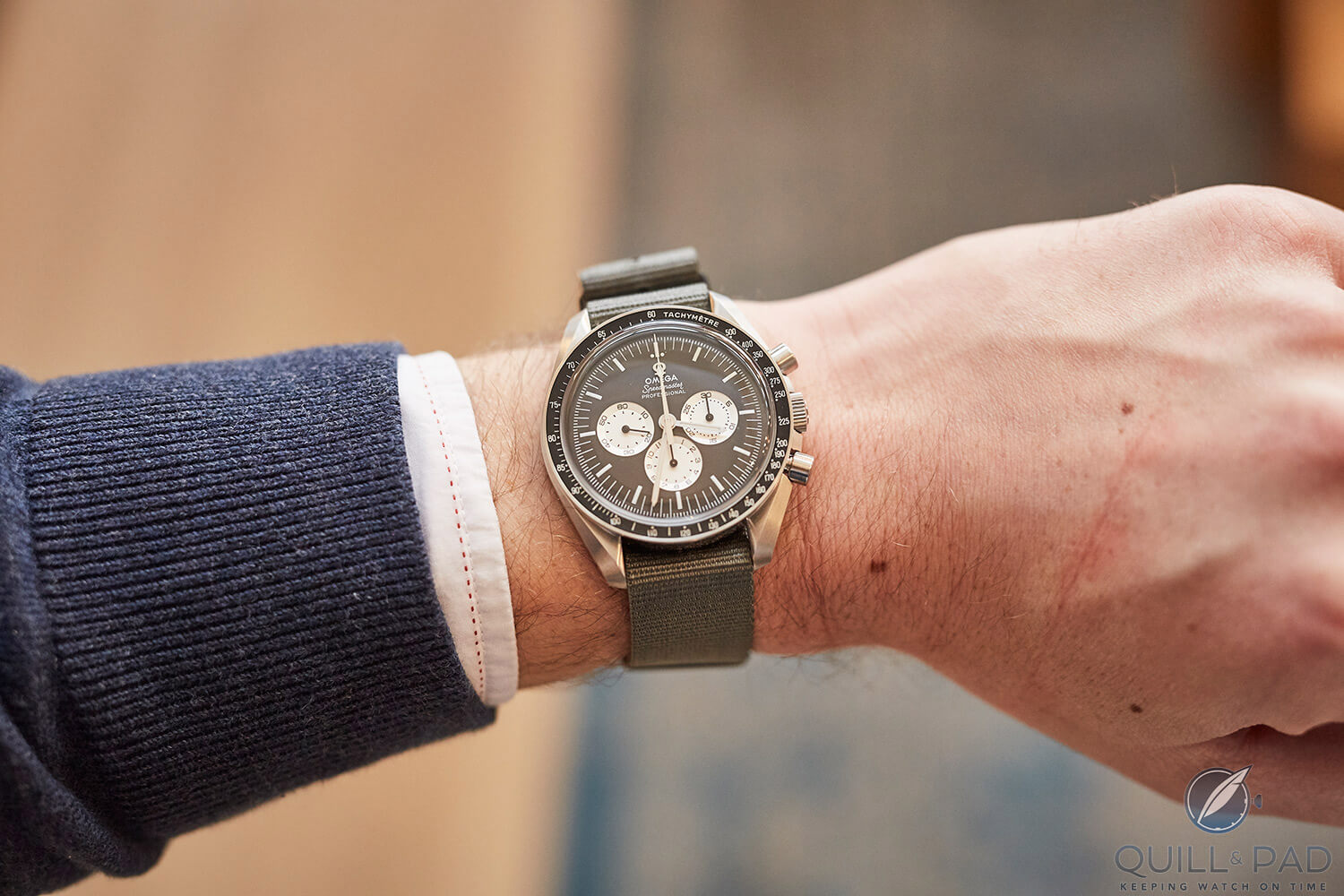 A year later, a second iteration of #SpeedyTuesday timepieces came to life. And this one sold out – all 2,012 pieces – even quicker, in under two hours! And one of these 2,012 watches is part of my personal collection. Maybe the most important part thus far.

The inspiration behind the Omega Speedmaster Speedy Tuesday 2 Ultraman was a limited edition Professional Speedmaster that was made for the Japanese market in 1968. Ordinary in most other details, that Speedmaster characterized by a bright orange chronograph second hand bears the nickname “Ultraman” in honor of an animated Japanese superhero.

Not many of the original watch were made, making it quite a collector’s gem on today’s market and fetching prices around the €50,000 mark. The re-edition of 2020 is slightly less rare, but nonetheless also sought after.

Just like with the first Speedy Tuesday limited edition of 2017 based on an Alaska Project III reference, Omega and Fratello decided to loosely base the watch on an original but add a few twists. Thus, the bright orange chronograph second hand remains, and plenty of new little details were added to make quite an outstanding timepiece.

Orange, the main theme of the watch’s design, also appears on the bezel’s tachymeter scale, hour markers, “Speedmaster” pad printing on the greyish dial, and the three-minute sector of the chronograph’s minute counter. 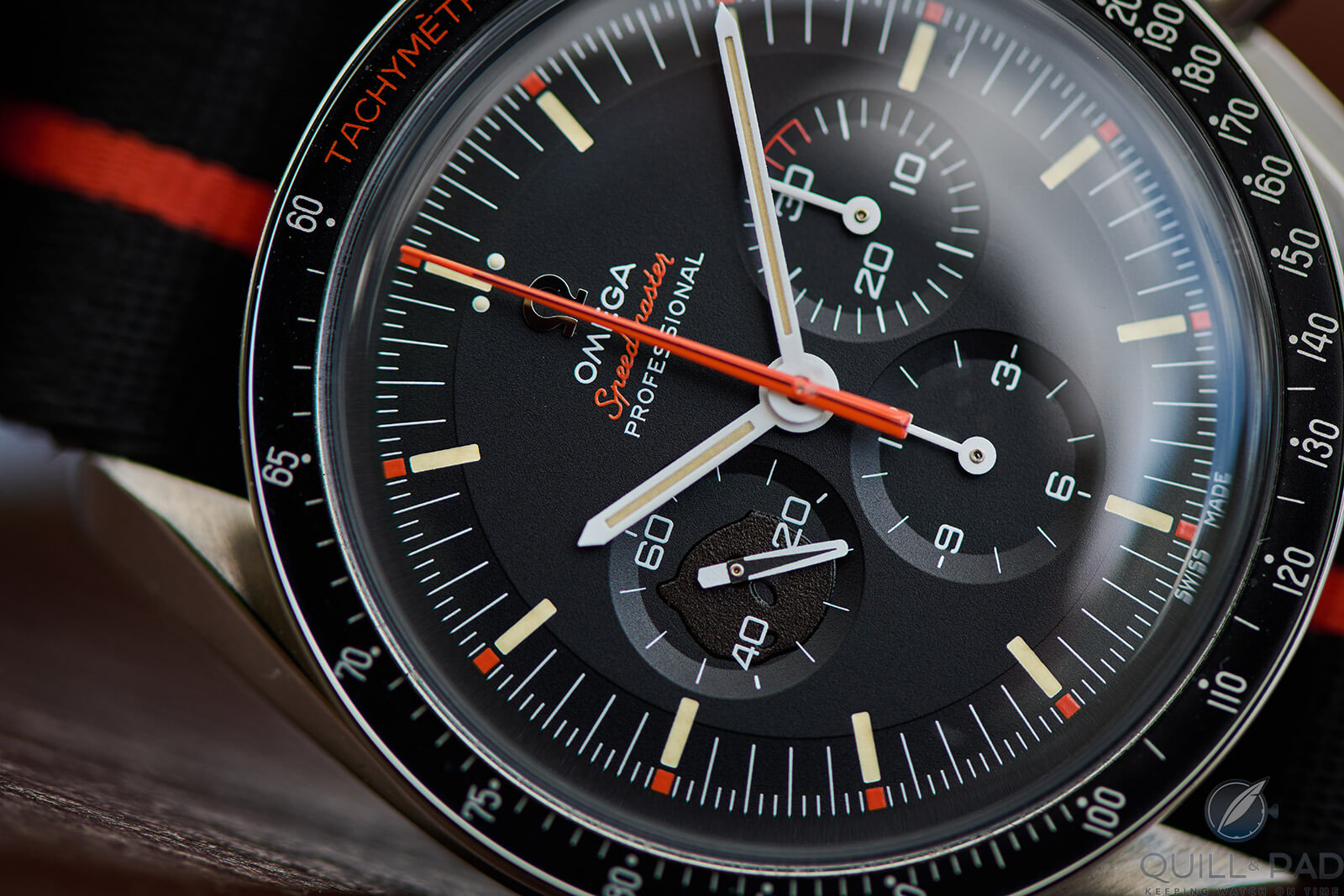 Why three minutes? Because that is the amount of time Ultraman could activate his superhero powers.

The dial is made of aluminum and characteristically designed using the symmetrical, clean, tricompax layout comprising three subdials at 3, 6 and 9 o’clock. The simplicity of the Speedmaster’s dial has always been one of its perks, but in this Ultraman edition Omega decided to spice things up a little.

Look closely and you will note something hiding in the subdial at 9 o’clock. Take an even closer look and the silhouette of Ultraman appears just under the interestingly shaped hand. 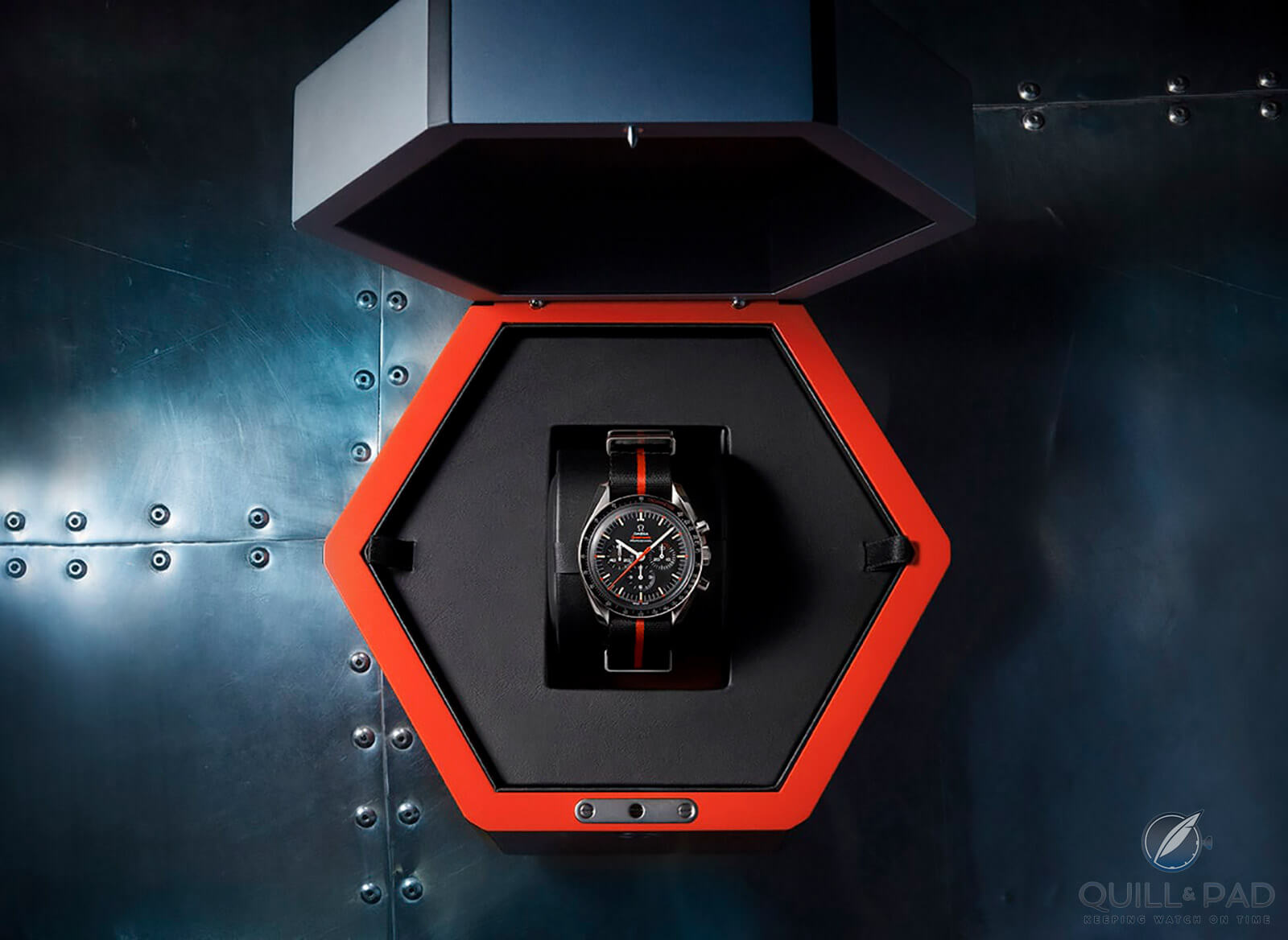 To make it pop, you need to run an UV light over it – a little rocket-shaped torch is included in the set whose box is quite impressive in itself. Formed like Ultraman’s control table, the hexagonal case houses the watch, the warranty booklet, manual, and the aforementioned flashlight with an integrated strap-changing tool as well as an additional black calfskin leather strap with orange stitching, of course.

For the true geeks, a few hidden messages were also implemented – to be uncovered with the aforementioned UV light. 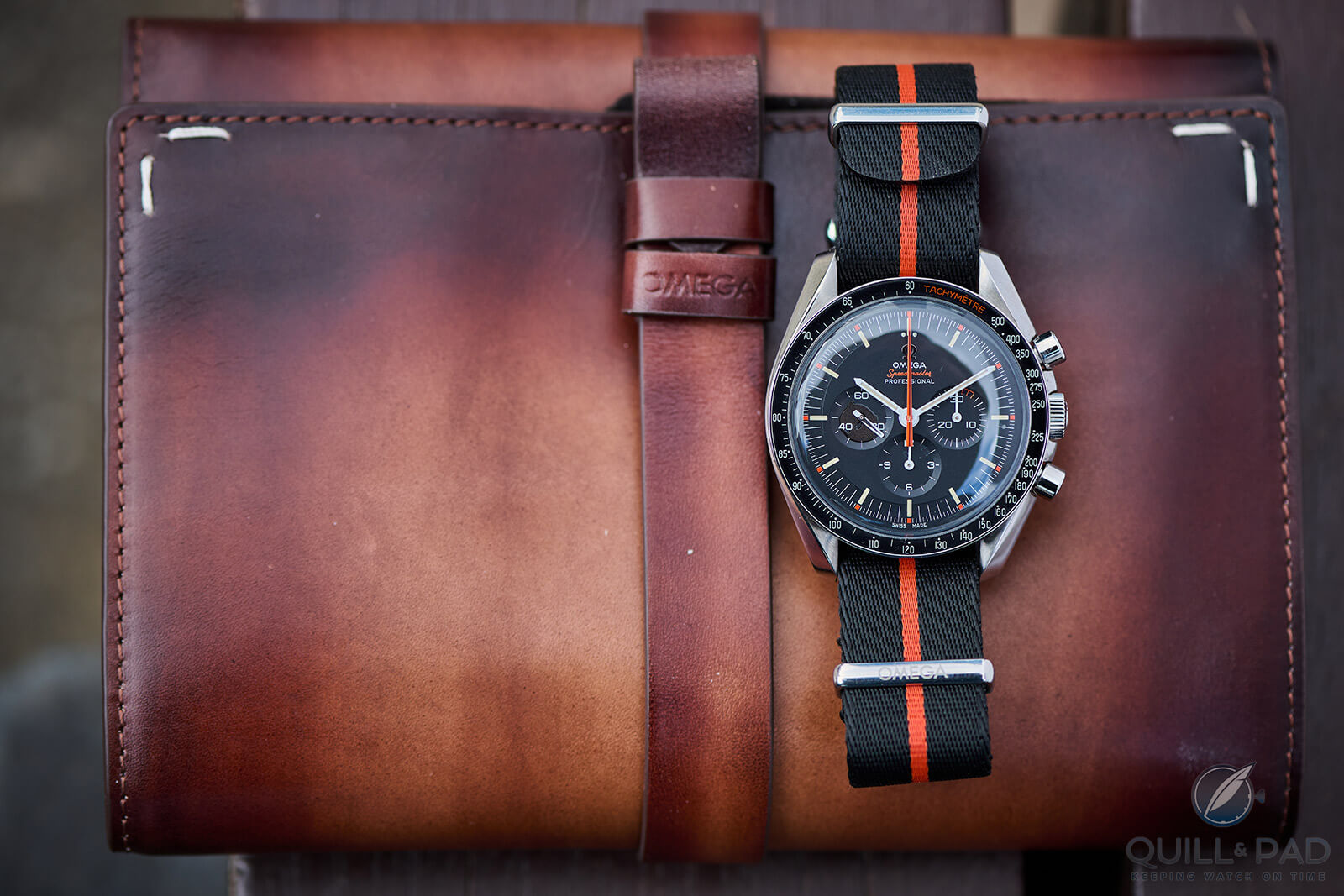 Why I bought the Omega Speedmaster Speedy Tuesday 2 Ultraman

If I openly state I’m not a particular fan of the Omega Speedmaster, you will certainly ask why on earth I bought this watch. Well . . . emotions. When the watch was about to come out, I had a choice to make. A “round” birthday called for a present for myself, and what better gift could I imagine? 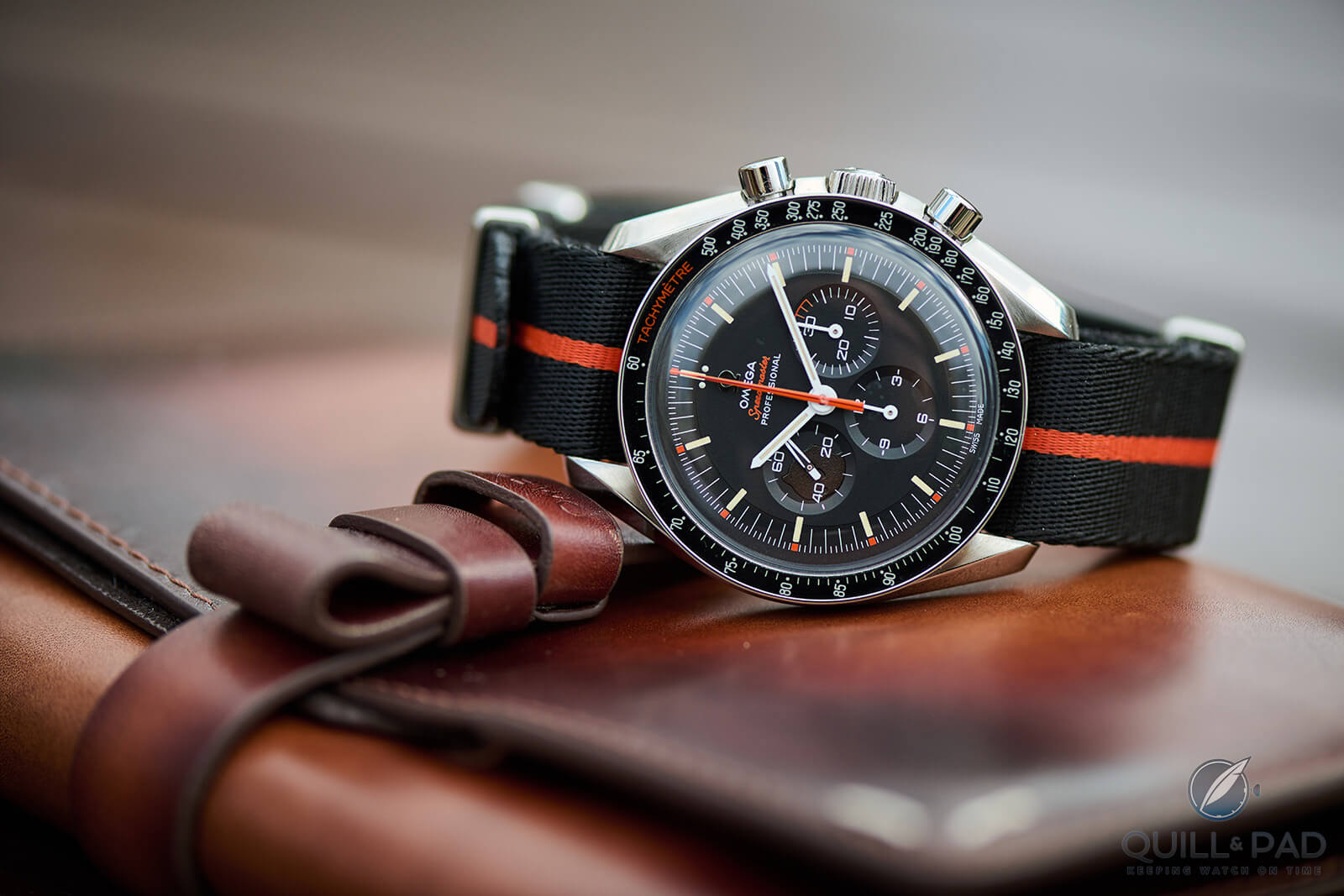 The inner debate raged between a few different brands and pieces . . . you know the feeling, when you want to get something special but just can’t decide between this, that, or maybe even that. I struggled, I hesitated, I had doubts, and I changed my mind probably a dozen times.

Then the rumors came, predictions, first rumblings. I decided to buy the Ultraman blind without ever seeing a single piece of design, knowing the name, and not having any other information. I also had an amazing opportunity to select a number, so my birthdate is on the back. 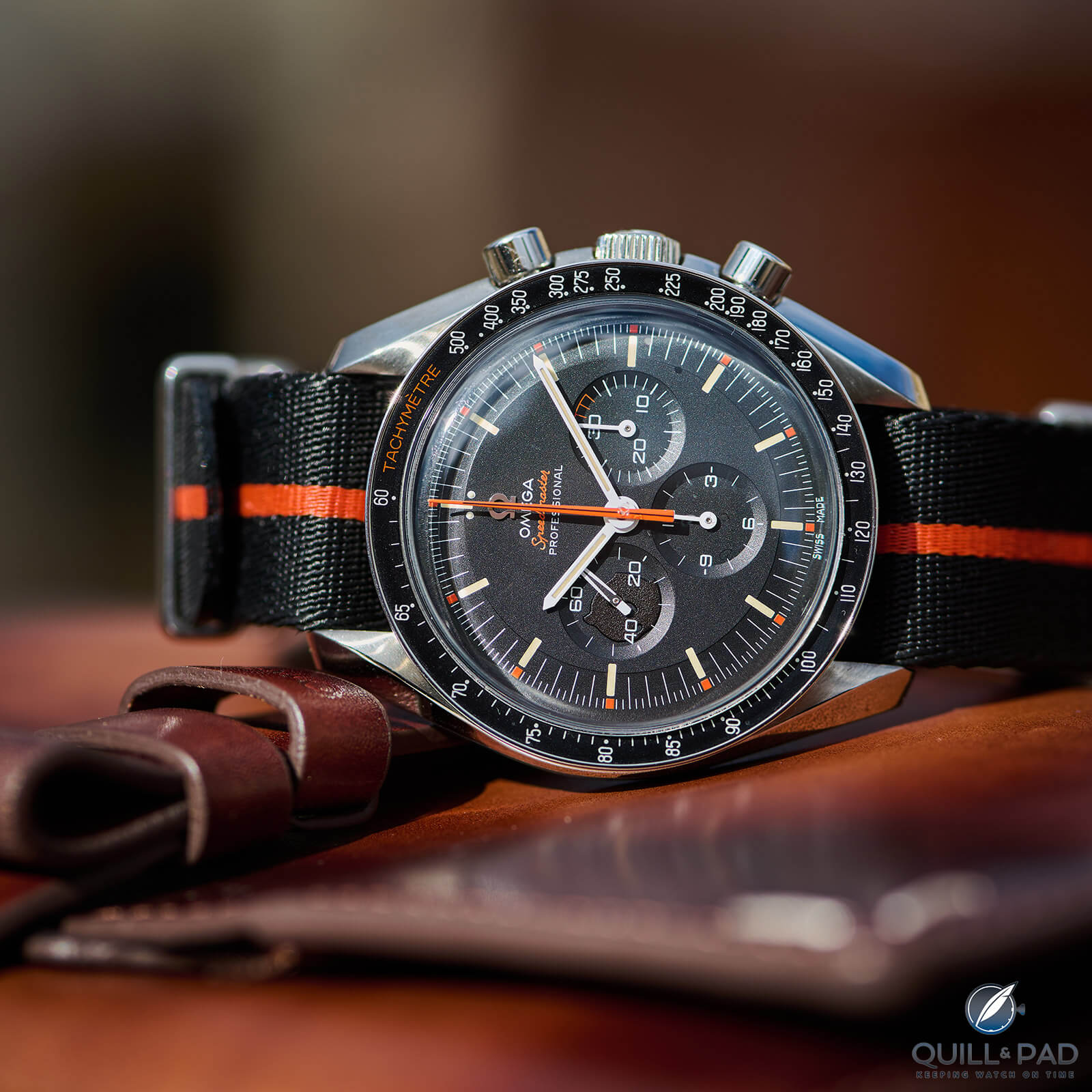 What makes me happy every Tuesday is not necessarily the watch itself, but what it stands for. First there is the moon story, which is – let’s not fool ourselves – about the sexiest and most exciting story there is in watchmaking. You’ve gotta be impressed and even possibly a bit overwhelmed by the famous “Flight-Qualified By Nasa For All Manned Space Missions” engraved on the back next to the Speedmaster emblem.

Then there are the people.

Speedy Tuesday was all about Fratello founder Robert-Jan Broer and his idea to create a catchy hashtag for his crazy Speedmaster obsession. What was at first just an innocent hashtag turned into the fastest growing watch community out there, with tens of thousands of devoted followers sharing the same love and affection.

The watch that I chose has that very special bond with people and passion, people that I consider friends and even mentors in the watch world (I’m looking at you, RJ). They make the watch for me, make it more than just an object to tell the time strapped on the wrist. 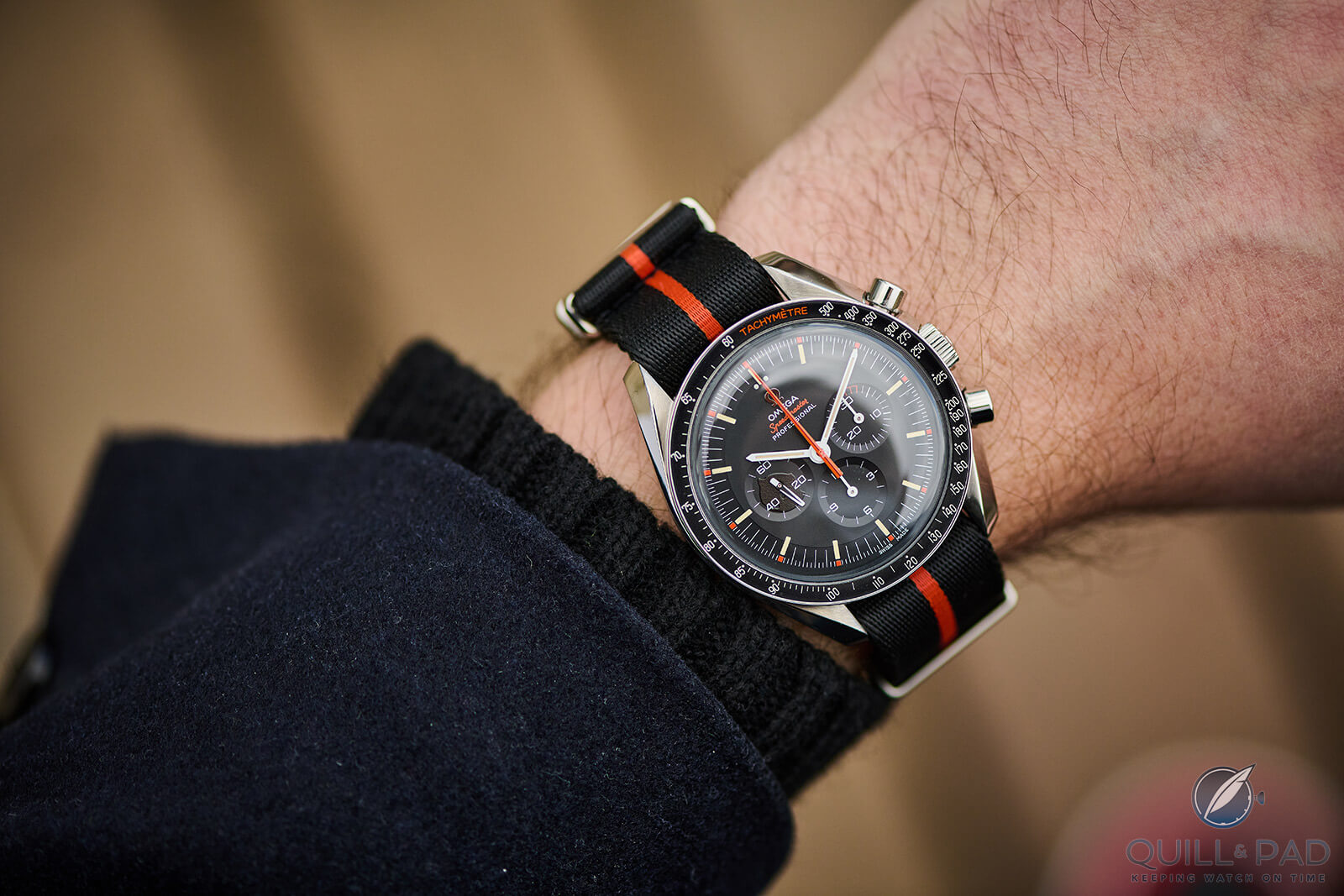 I cherish these emotions every time I wear it. There’s no better reason to actually own a watch than that.

Łukasz Doskocz is the editor-in-chief of the premier Polish watch publication, www.CH24.pl.

* This article was first published on August 21, 2021 at Why I Bought It: Omega Speedmaster Speedy Tuesday 2 Ultraman.

Chopin Opus 10 No. 12: The First ‘Etude’ By A Musically Inspired Independent Brand From Poland

How Dangerous Is It To Wear Your Watches In Public? With Tips For Minimizing The Risks – Reprise