Hooray! In only a couple of weeks a flood of watch lovers – yours truly included – will descend on Geneva for the show formerly known as SIHH plus parts of Baselworld, now known as Watches and Wonders Geneva. 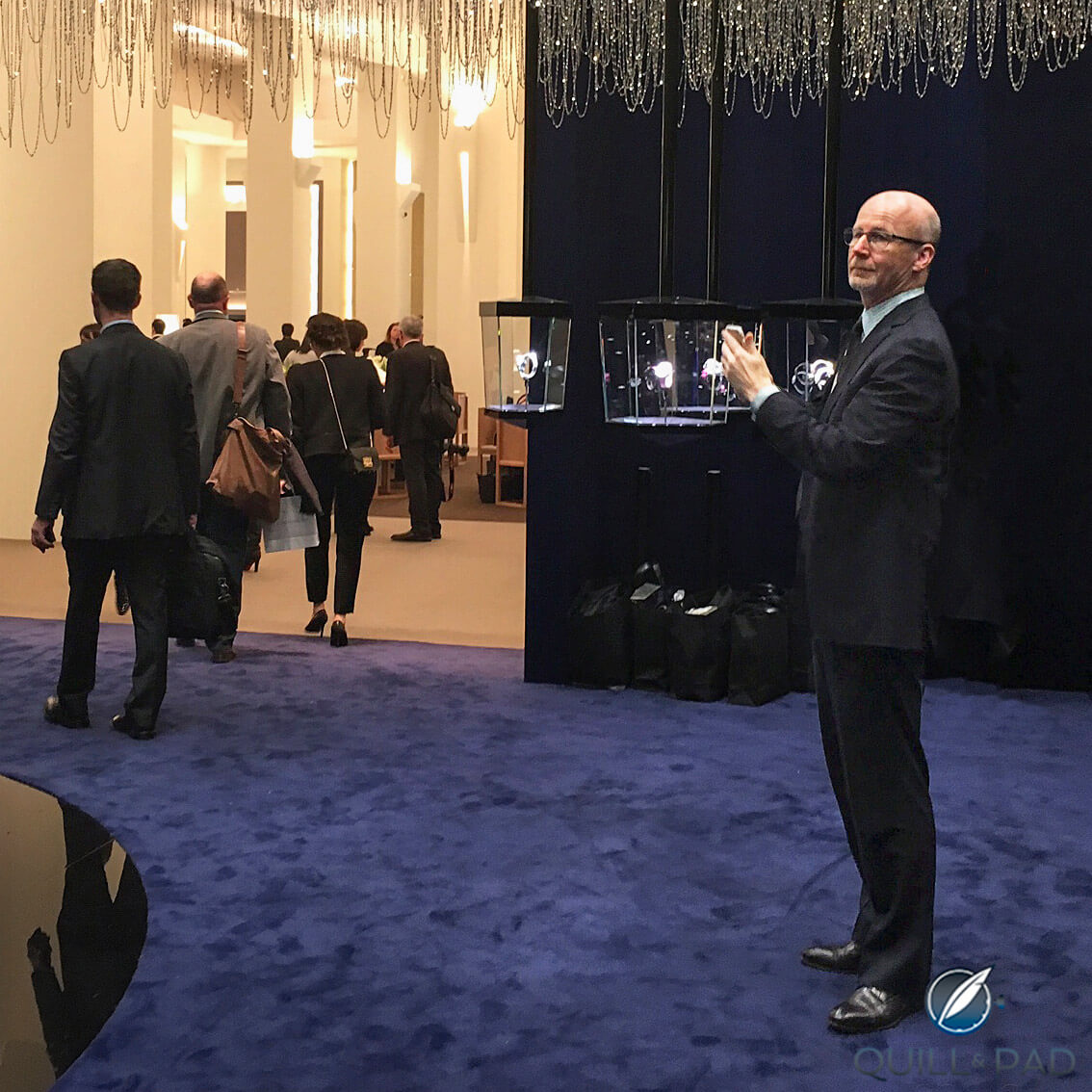 In his happy place: your faithful scribe at the Piaget booth, SIHH 2016 (photo courtesy @interior.angles)

As it’s been two years since a proper in-person Geneva fair, I for one wouldn’t miss this one for the world. Some brands have come, and some have gone, but the array of exhibitors at Palexpo will make for great viewing, I am sure – and as always, the true highlights will be the opportunity to reconnect with people I haven’t seen in far too long and the chance to spend quality time with our NorCal Gang traveling squad.

As I prepare for the trip to Switzerland, the demise of Baselworld is very much on my mind. Unlike some other observers, I don’t think that the death of that show was due to expensive sausages or usurious hotel prices; to me it seems that the era of all-inclusive mega watch shows is rapidly coming to an end for reasons I’ll discuss below.

The natural implication is that Watches and Wonders Geneva will be the next exhibition to change radically or that it will even cease to exist.

Once you start looking for them, the indications of imminent change are all around us.

Year-round introductions: not that long ago, the watch introduction model for most brands worked on an annual cycle built around loading the trade. New pieces were introduced and sold into wholesale and retail distribution at the winter/spring shows, delivered some months later, and then available for sale to consumers.

Having big trade fairs was useful to get the key distribution channel members all in one place and to get a good sense of target production levels for the new watches. But from a publicity perspective in the digital age, the torrent of new watches all at one time began to overwhelm both consumers’ attention spans and journalists’ capacity to comment.

Today, most brands spread introductions across the year, providing “new news” and stimulating interest throughout the calendar year while moderating the crush of all-at-once launches at the annual fairs. 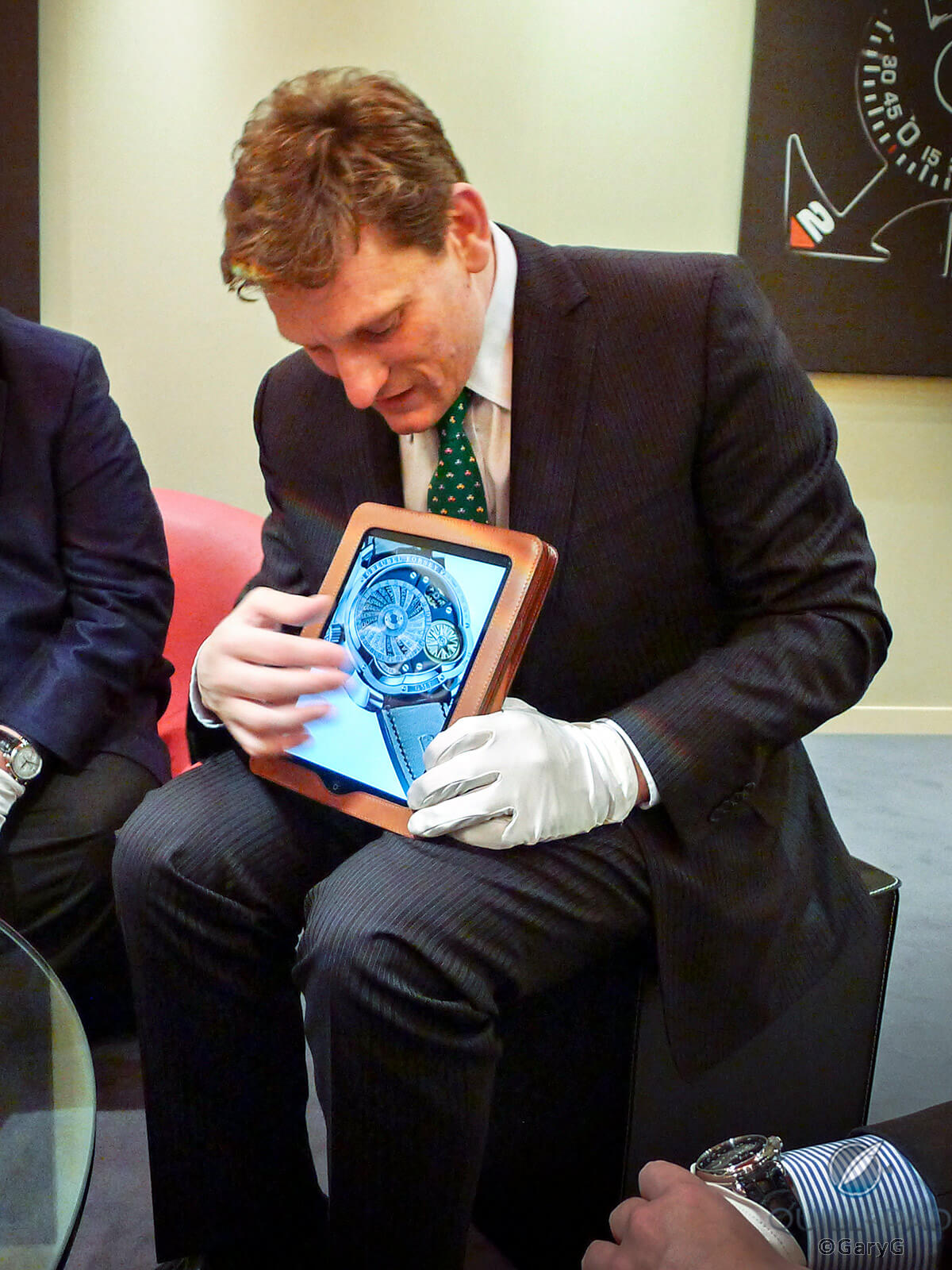 Launching at the fair: Stephen Forsey introduces the Greubel Forsey GMT to our collector group at SIHH 2014

Direct selling and the decline of multi-brand retail: for brands who can establish company-owned retail channels and manage them successfully, the need for a “trade show” simply goes away. In recent years both Richard Mille and Audemars Piguet dropped out of SIHH as they focused on direct distribution. And as other Watches and Wonders brands increase their focus on boutique sales and boutique-only references, we can expect further defections and reductions in participation.

I’m already aware of at least one brand that will be substantially downsizing its 2022 booth size from past years and focusing on a small set of boutique-focused new products.

All things to all people or nothing to everyone? In the decades of my day job in business strategy consulting, I got great mileage from asking a few simple questions. One of the most useful was to respond to a client’s statement that they wanted to launch a promotional campaign, build an innovation function, or broaden their product line by asking “to achieve what?” Too often, companies and institutions launch new efforts – or sustain existing practices past their usefulness – by failing to be clear about what, exactly, they are trying to achieve. 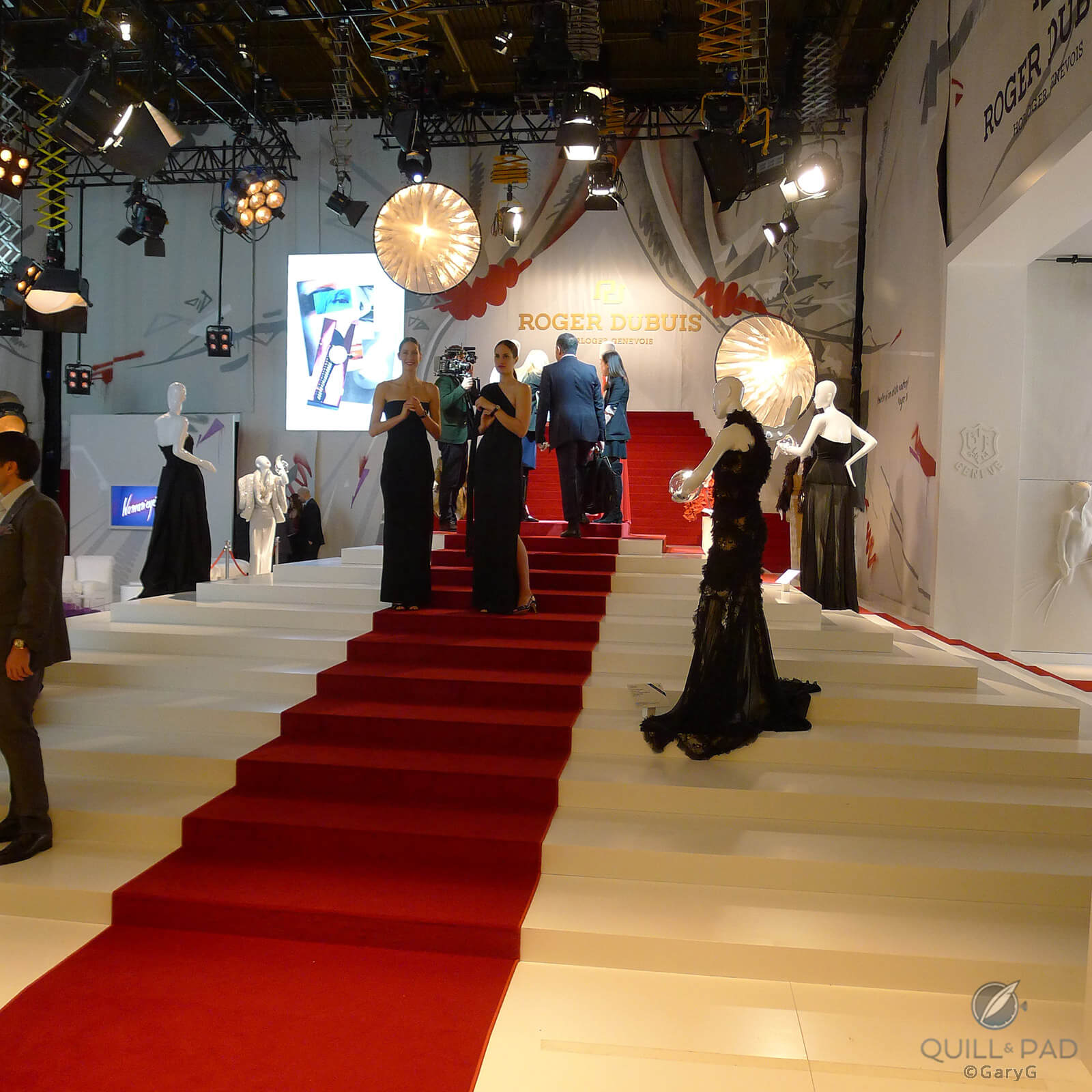 Looks good, but to what end and for whom? Roger Dubuis booth, SIHH 2016

For me, Baselworld fell afoul of this problem in a big way. By trying to serve all sectors of the watch and jewelry industries, cater to the public, serve as the annual focal point for trade dealing, attract collectors, and inform journalists all at once it diluted its mission so substantially that it became impossible meet any stakeholder group’s expectations well. Add infrastructure limitations and bad word of mouth and the result was inevitable.

Meanwhile, more specialized communication and engagement events with a clear view of “what to achieve” are on the rise. Dubai Watch Week’s educational market expansion mission is one notable example, to the extent that it took home the Jury Prize at the 2021 Grand Prix d’Horlogerie de Genève.

Patek Philippe has now staged three of its massive Grand Exhibitions around the globe, both bringing new audiences to horology and reinforcing its brand position atop the pyramid. We have WatchTime New York and other local shows, grassroots organizations like RedBar, charity-oriented brand showcases such as Only Watch, access to new product for established collectors at brand boutiques and specialty retail outlets like the AP Houses, and for the press a rekindling of launch events following the most recent Covid wave.

Zoomification: I’m one of those folks who doesn’t really feel he has a sense of a watch until he sees and holds it, but that may to some extent betray me as an aging member of the enthusiast community. Watches and Wonders seemed to do all right the past two years as a virtual event; it will be interesting to see the extent to which this year’s online elements continue to draw, or even expand, their audiences, putting another nail in the coffin of the massive physical show. 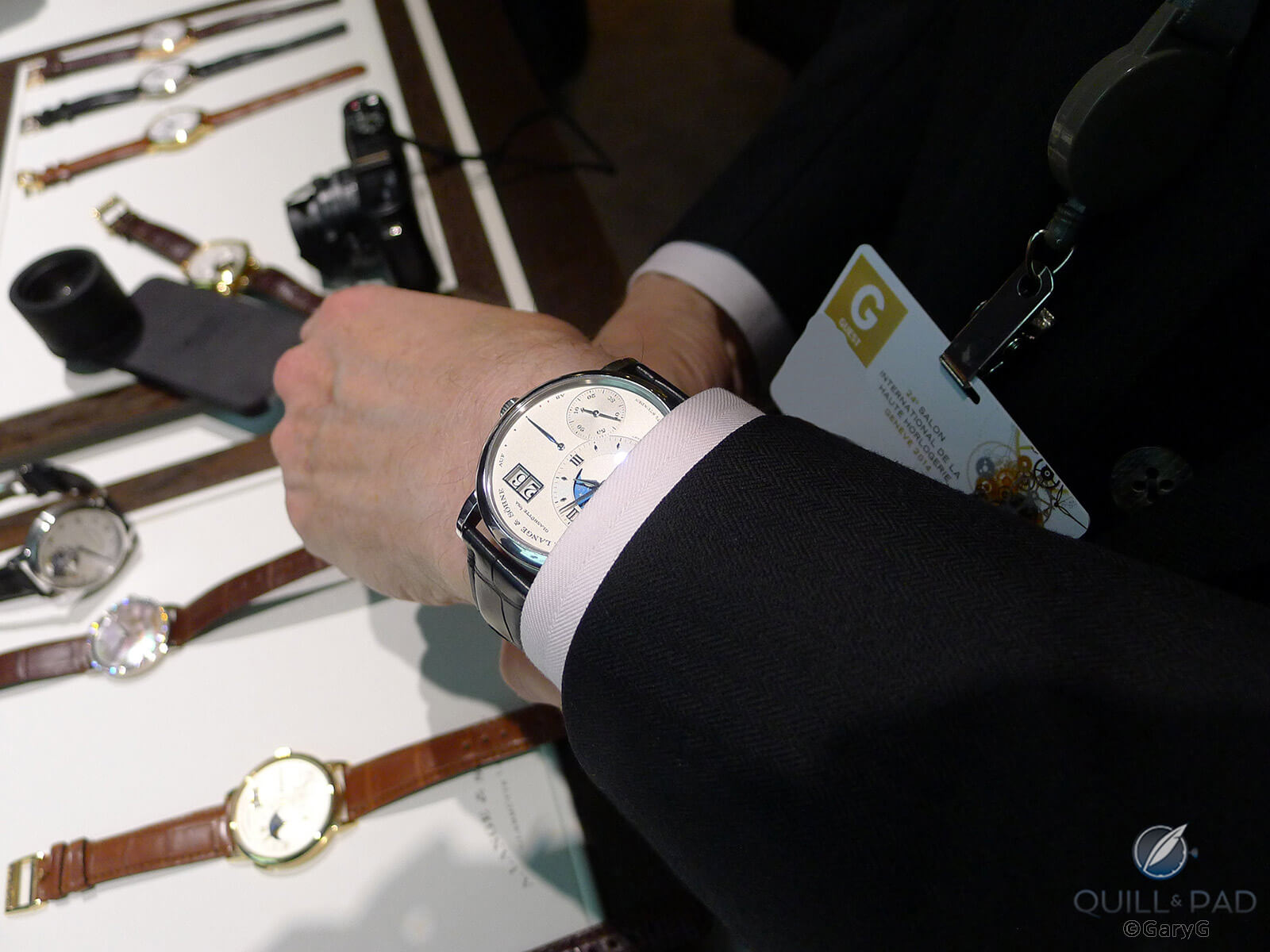 See and touch: a friend checks out A. Lange & Söhne’s new products at SIHH 2014

Defectors and free riders: as long as I’ve been going to the Geneva show, there have been satellite displays by independents and non-participating brands outside the walls of Palexpo. Several years ago, the SIHH organization cleverly created the Carré des Horlogers, a popular hall of smaller booths for independents to display their work, attracting a variety of high-visibility makers including Kari Voutilainen, Grönefeld, Laurent Ferrier, and H. Moser et Cie. among others.

Some of those remain at the Carré des Horlogers this year, but several others made the pre-pandemic choice to favor Baselworld’s greater public access over Geneva’s more restricted (and costly) arrangements, and they have stayed away. Others, including long-time main hall exhibitor Greubel Forsey, are notably absent as well. 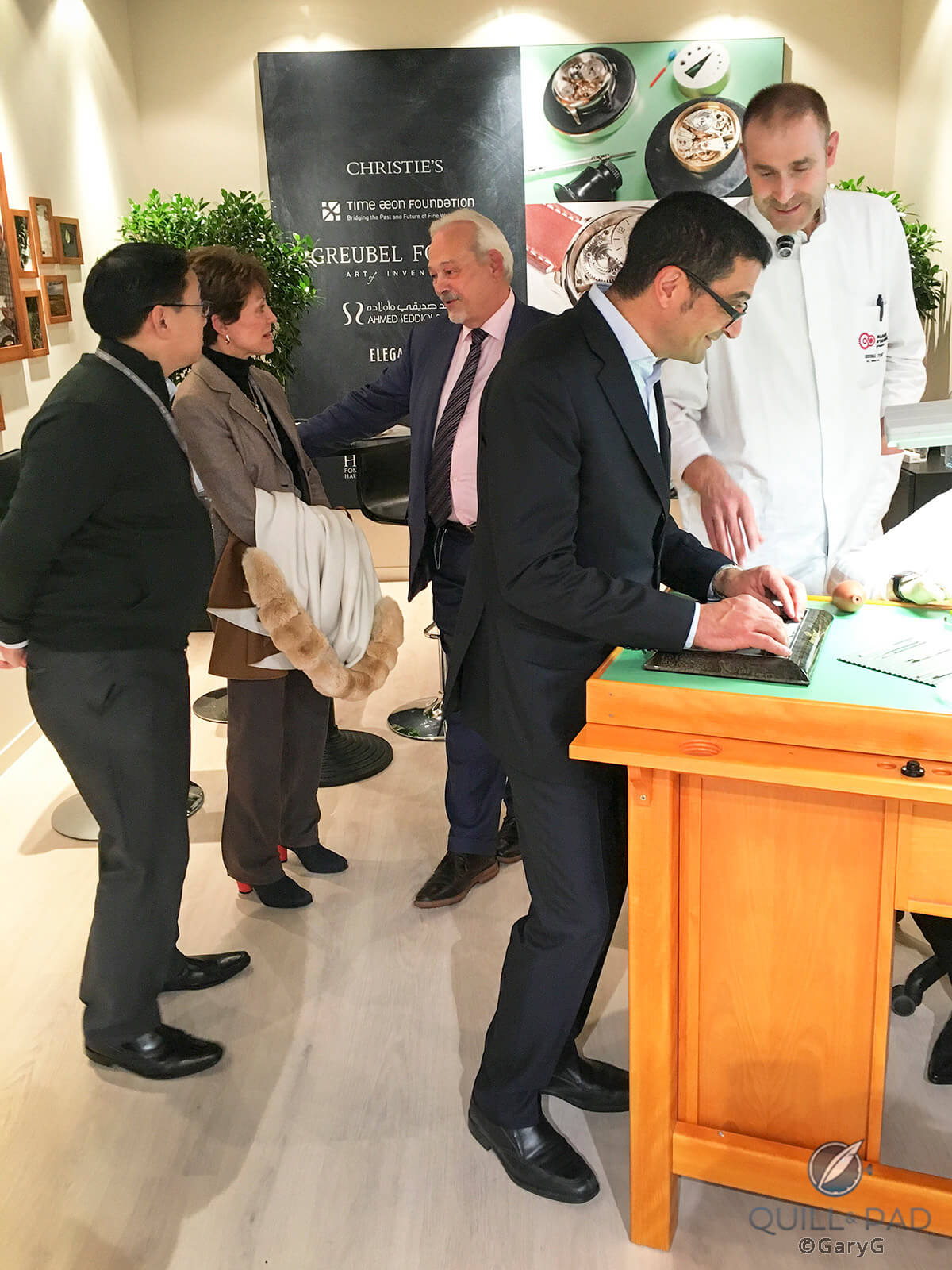 And it seems that not a day passes without another email notification hitting my inbox about a new exhibit of smaller brands somewhere in or around Geneva during Watches and Wonders. Several brands are showing at hotel suites along the lake; the A.H.C.I. will have its Masters of Horology show every evening at a venue on the Quai des Bergues; eight brands including Singer Reimagined and Schwarz Etienne will be at Barton 7; and so far a list of 30 watch and accessory brands ranging from Louis Erard, Corum, Sinn, and Reservoir to winder maker Scatola del Tempo will be out at HEAD-Genevè for “Time to Watches.”

Watches and Wonders organizer Fondation de la Haute Horlogerie has never been enthusiastic about these remoras hitchhiking on the whale that was SIHH and is now WWG. At some point, the economics of participating at Palexpo, especially given the other factors I’ve set out above, will simply make no sense for more and more of the exhibiting brands. Whether the side shows will persist after the main tent folds is another matter and will be fascinating to watch. 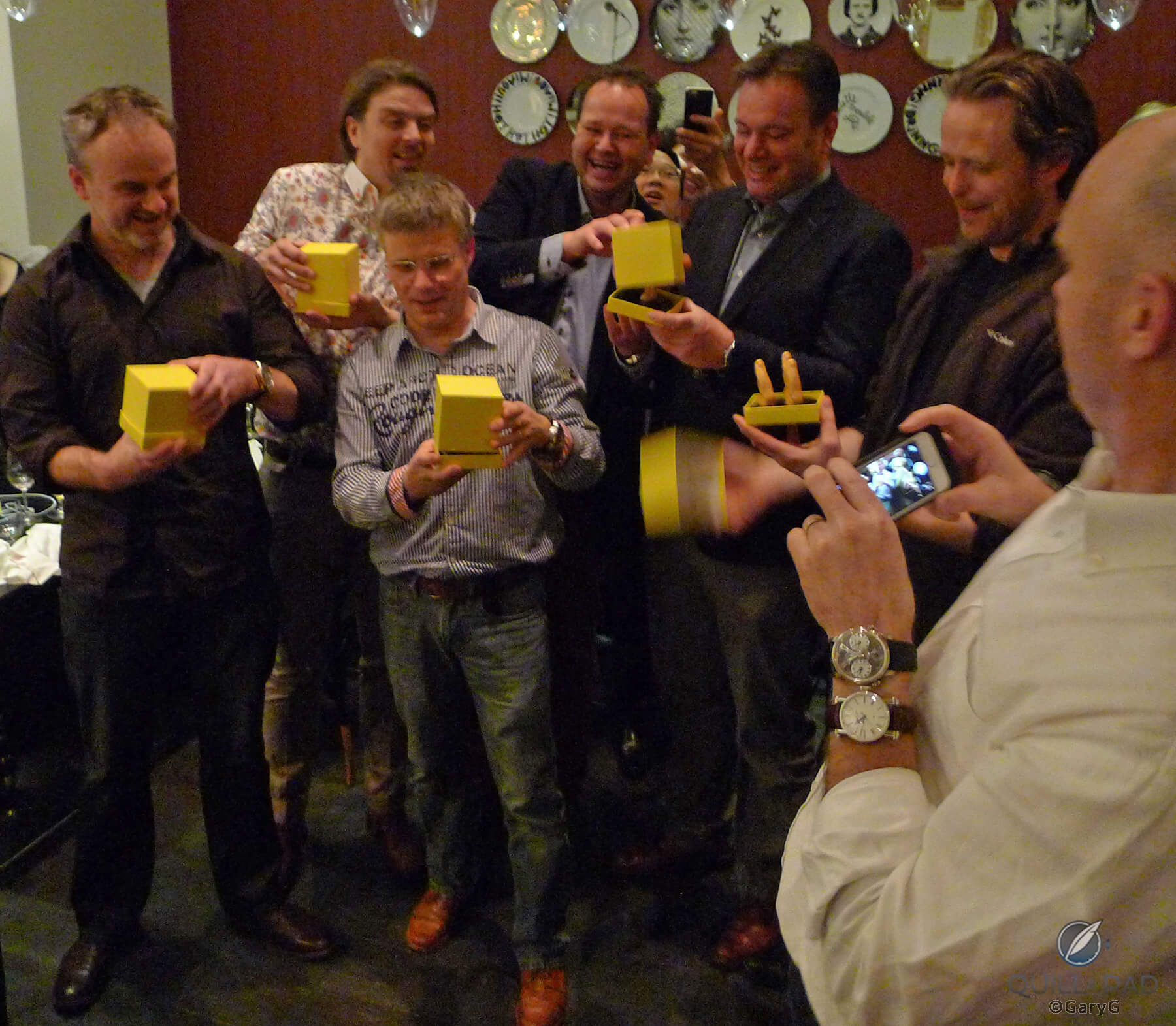 Meeting off campus: good fun at the “independents’ dinner,” SIHH 2014

By the way, the explosion of indie and small-brand events during WWG week suggests to me that previous Messe Basel CEO Michel Loris-Melikoff’s final vision for Baselworld before he and organizer MCH group parted ways late last year was pretty much on the mark: a “to achieve what” focused on providing showcases for smaller brands in locations around the world. It’s a shame that he didn’t have the opportunity to follow through as this sort of more targeted “Baselworld” would have filled a clear gap in the world of horological communication and consumer engagement.

Why I could be wrong

Watches and Wonders is doomed, right? I’m certainly going to participate in this year’s show with even more gusto than usual based on the assumption that my analysis is correct, but with the fervent hope that I’m mistaken and that we’ll all be meeting up in Geneva in the spring for years to come.

There are two main reasons that could come to pass.

The brands that matter: with all due respect to Panerai, Hublot, Montblanc, and the rest, there are exactly three exhibitors that matter at WWG from a commercial perspective: Cartier, Patek Philippe, and Rolex/Tudor.

Coincidentally, those three companies also still depend very heavily on third-party distribution and multi-brand retailers, and at least Patek Philippe and Rolex have largely kept to the traditional practice of introducing new products at the big annual fair. For these “big three,” WWG can continue to serve as a true distribution-centered trade fair with enough guaranteed coverage from press and enthusiast outlets to ensure that their messages rise above the clutter. That alone may be enough to keep WWG afloat with at least the other brands in the Richemont sphere continuing to participate as well. 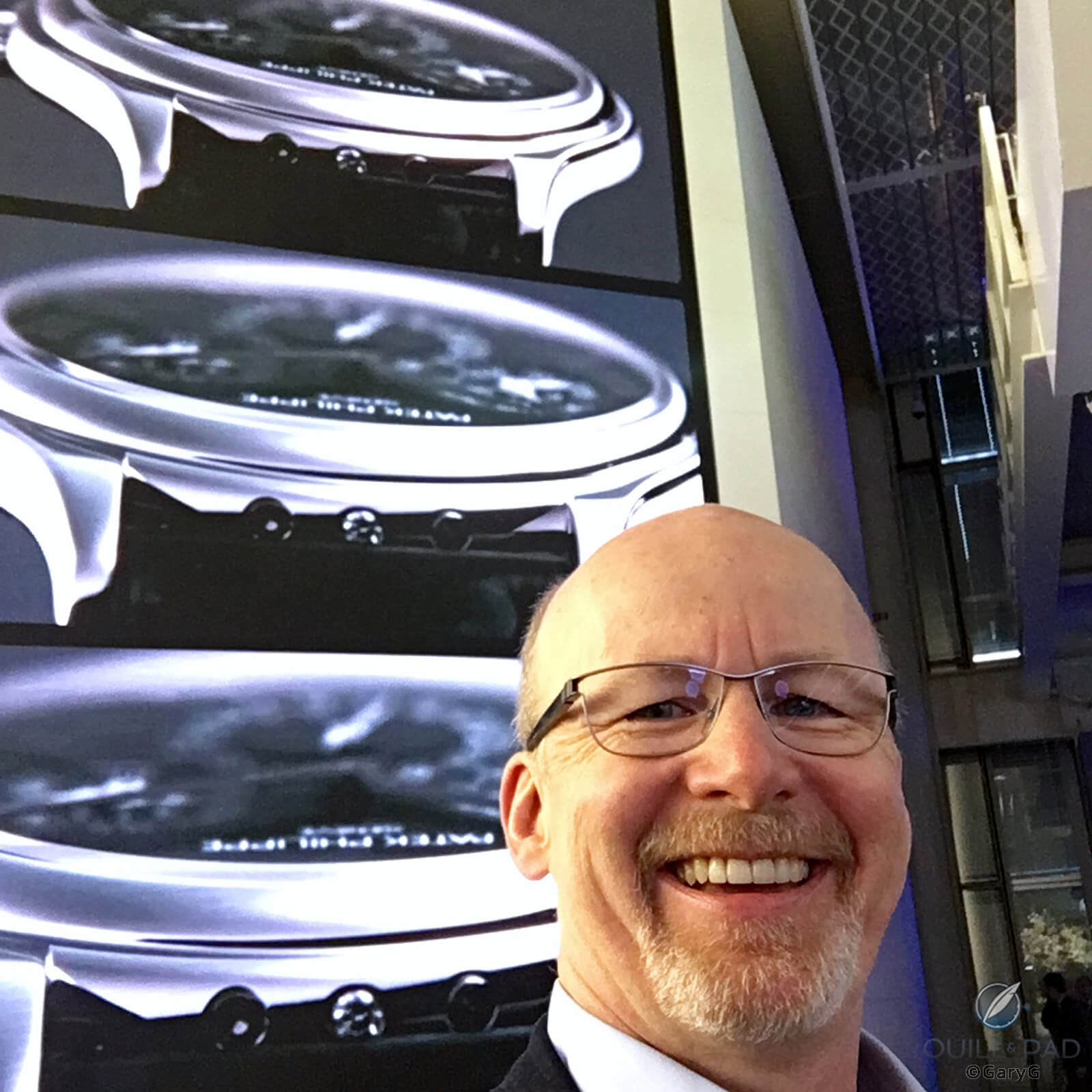 Big brand: outside the Patek Philippe booth at Baselworld

There are watches involved, but it’s all about the people: even in a virtual world, there’s no substitute for getting the world’s watch business leaders and leading enthusiasts in one place at one time to form closer relationships and advance the industry’s interests. It’s harder to put a value on the benefits of those interactions than on the number of watches sold, but just a few side conversations or unexpected deals struck could be just the spark needed to keep WWG alive as it evolves to meet the winds of change. 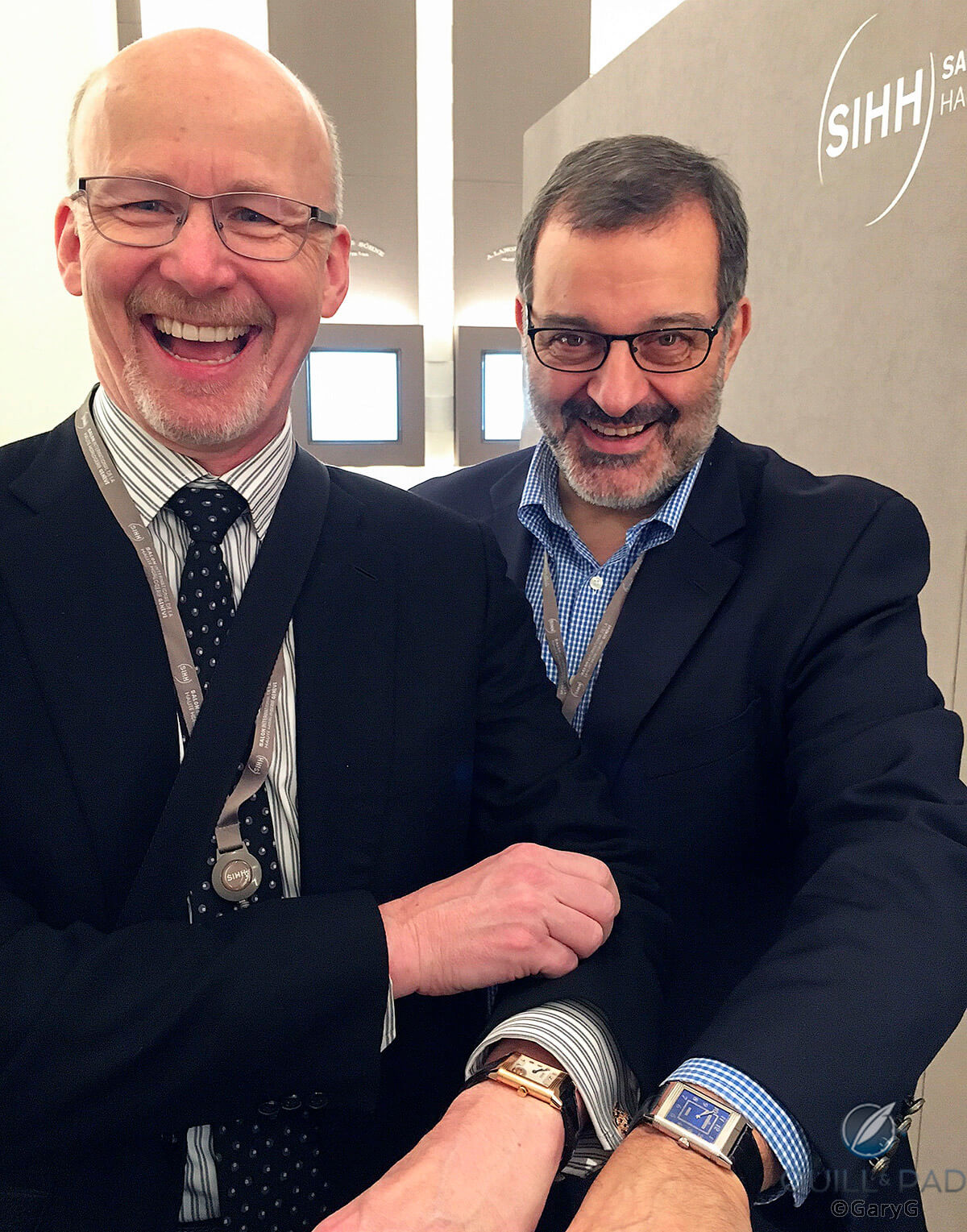 It’s all about the people: meeting up with a friend and fellow Jaeger-LeCoultre enthusiast at SIHH 2016

I’ll be interested to hear your thoughts in the comments below. And if you’re in Geneva for the show week and see me, don’t be bashful! It’s always a treat to see old friends and make new ones, and Watches and Wonders should provide ample opportunities for both.

Why We Love Baselworld: The Show That Never Ends

WatchTime New York Returns, Showcasing Some Of The Most Stunning Timepieces Of 2021