You Are There: Breitling Launches The Limited Navitimer B02 Chronograph 41 Cosmonaute And Collectors Strut Their Stuff

Just when I think I know a little bit about watches, a portal opens to a whole new facet of our hobby I hadn’t previously appreciated! So it was when I recently joined collectors and journalists from around the world for Breitling’s launch of the Navitimer B02 Chronograph 41 Cosmonaute, a tribute piece marking the sixtieth anniversary of astronaut Scott Carpenter’s Aurora 7 orbital trip. Carpenter, the sixth human being to go to space, undertook this wearing his custom Breitling, the very first Cosmonaute, which was also the “first Swiss wristwatch in space.” 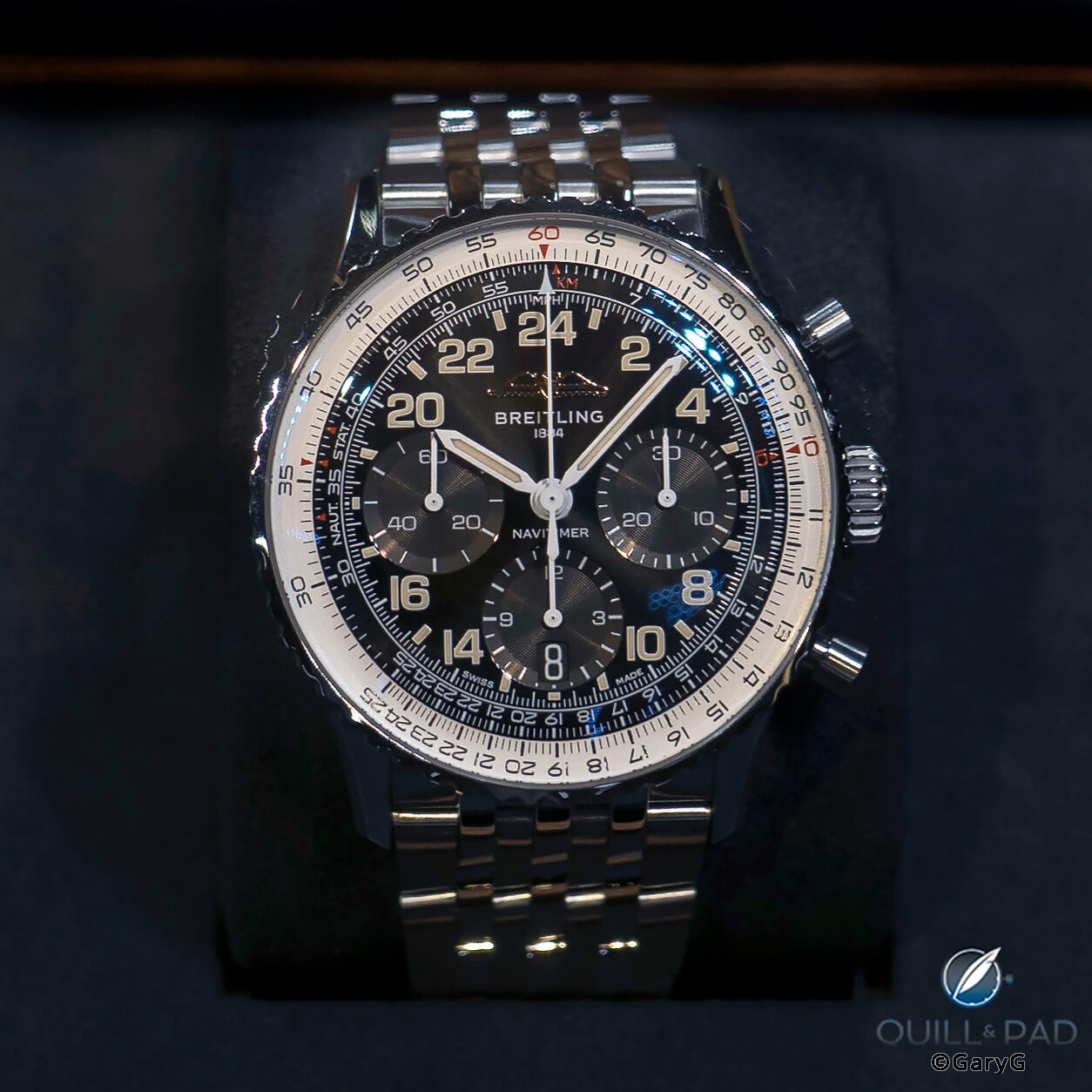 The history, in brief

As told at the event by members of the Carpenter family and Willy Breitling’s son Gregory, Scott Carpenter had come to admire the Navitimer watches worn by Australian aviators he met during a duty posting there. As his 1962 Mercury mission approached, he wrote to Willy Breitling asking for a special Navitimer with modifications. These included a 24-hour dial to match the capsule’s onboard computer display and keep day and night straight as he whizzed past sunrises and sunsets; a larger case diameter; removal of the tachymeter scale for better legibility; and a high-grip bezel to allow him to operate the built-in slide rule while wearing the gloves of his suit.

Breitling delivered the watch shortly before the lift-off date, and it became the second wristwatch and second Swiss watch – but the first Swiss wristwatch – to leave the earth’s atmosphere.

Rather unfortunately, after splashdown the watch filled with salt water, and in due course corroded. Breitling swapped it for a replacement, and the original was hidden away until the tribute reception, where it was re-introduced to the world. 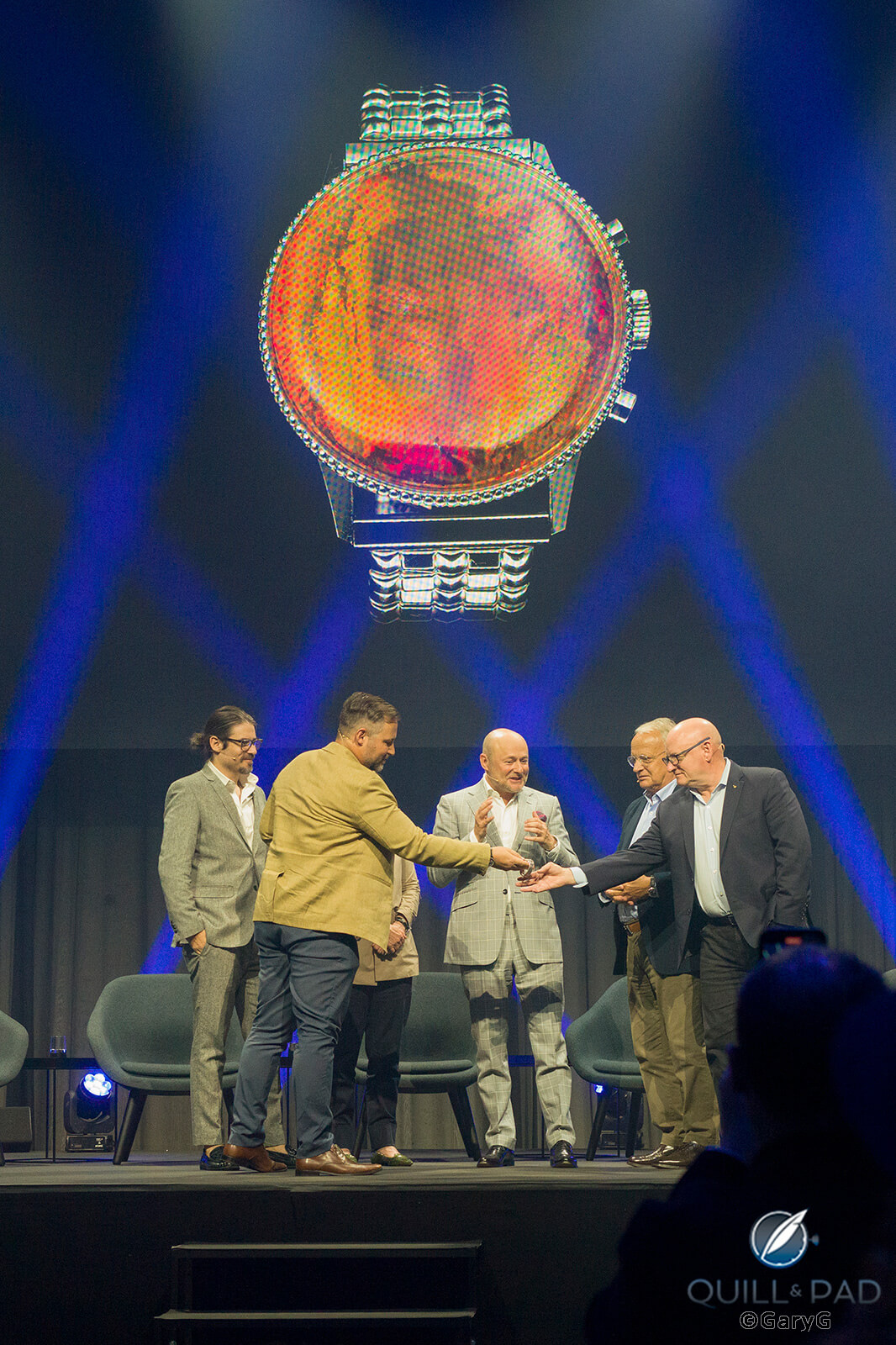 The historical elements of the event were quite well done in my view, with extensive commentary from the family and Gregory Breitling, deft moderation and occasional personal notes on space travel from Scott Kelly, brief technical remarks from leading Breitling collector Fred Mandelbaum, and an opportunity for audience members to ask questions about Carpenter, the mission, and the watch. It was also great to see the original Carpenter watch on display next to the Cosmonaute given to John Glenn by Breitling and purchased by Gregory Breitling at auction in 2019, allowing for a direct comparison of the corroded example with a virtually untouched one. 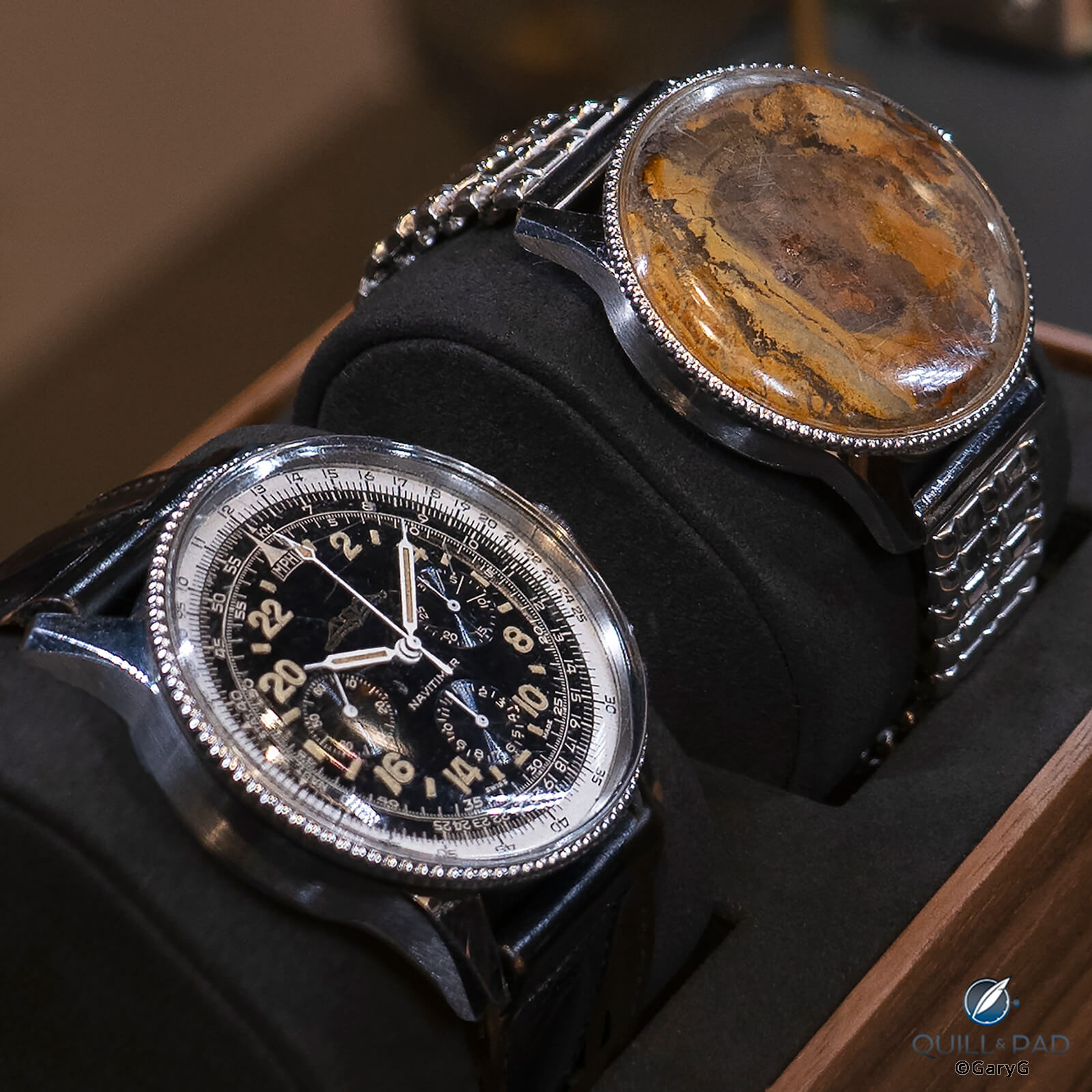 Side by side: John Glenn’s Breitling Cosmonaute (left) and the original Scott Carpenter watch

It emerged during the panel discussion that Carpenter’s son was actually wearing his father’s replacement Cosmonaute. During the informal gathering following the presentation, he was kind enough to pull up his sleeve and allow me to snap a quick wristshot. Interestingly, like both the Glenn watch and the new limited-edition piece, it does not display the Cosmonaute notation on the dial. 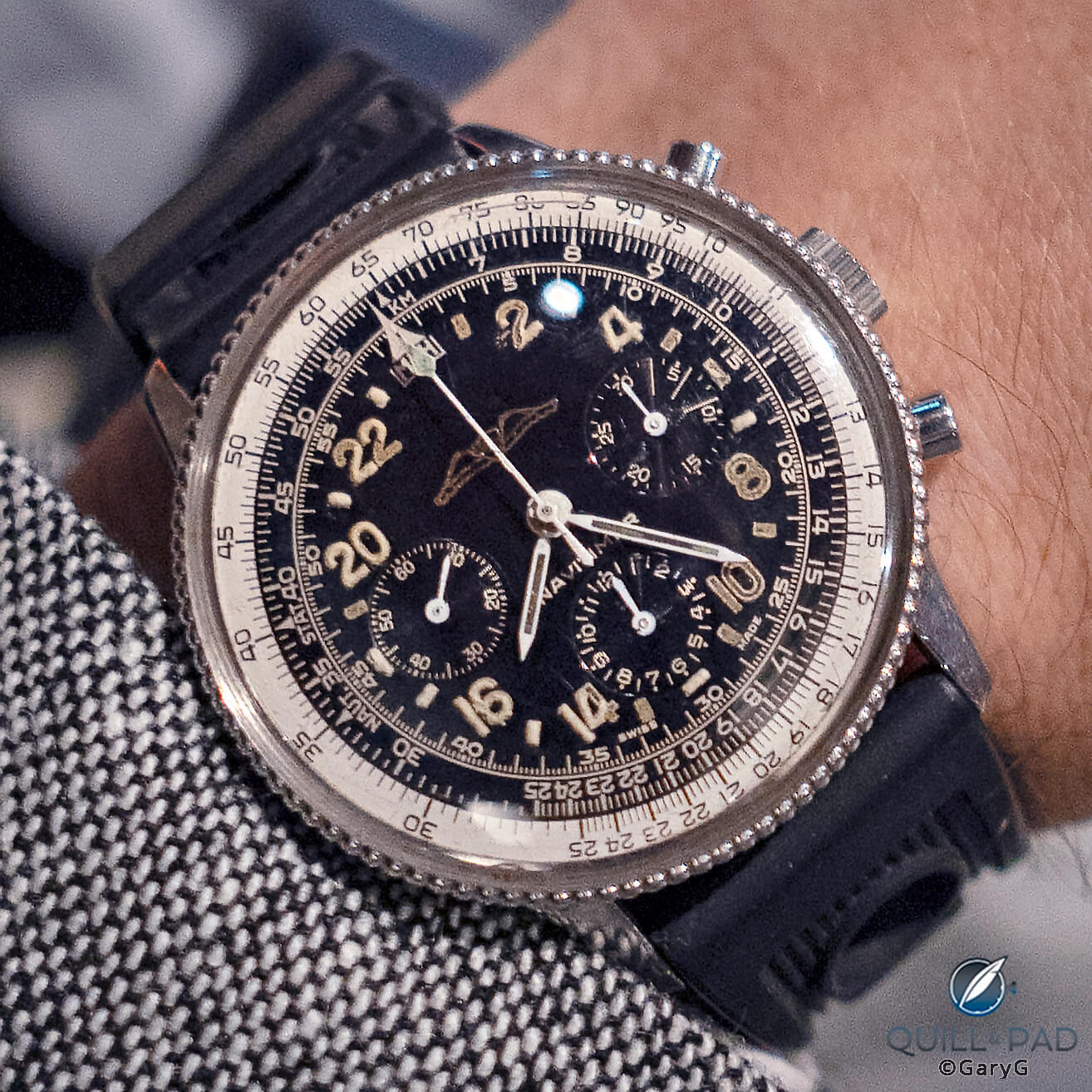 Bonus points if you noticed one other difference: the Carpenter replacement has pencil hands, while the Glenn watch sports syringe hands.

As for the freshly minted Cosmonaute, it’s clearly inspired by the original while not being an exact replica. The new watch is smaller at 41 mm, substitutes a fluted bezel in platinum for the original pearled steel version, and changes the dial markings fairly significantly with the elimination of the Cosmonaute notation in favor of the Breitling name, the addition of the numeral 24, and reduction in size of the MPH arrow. The subdials are also bigger and with more modern fonts, and there’s the addition of a date window at 6 o’clock, too. 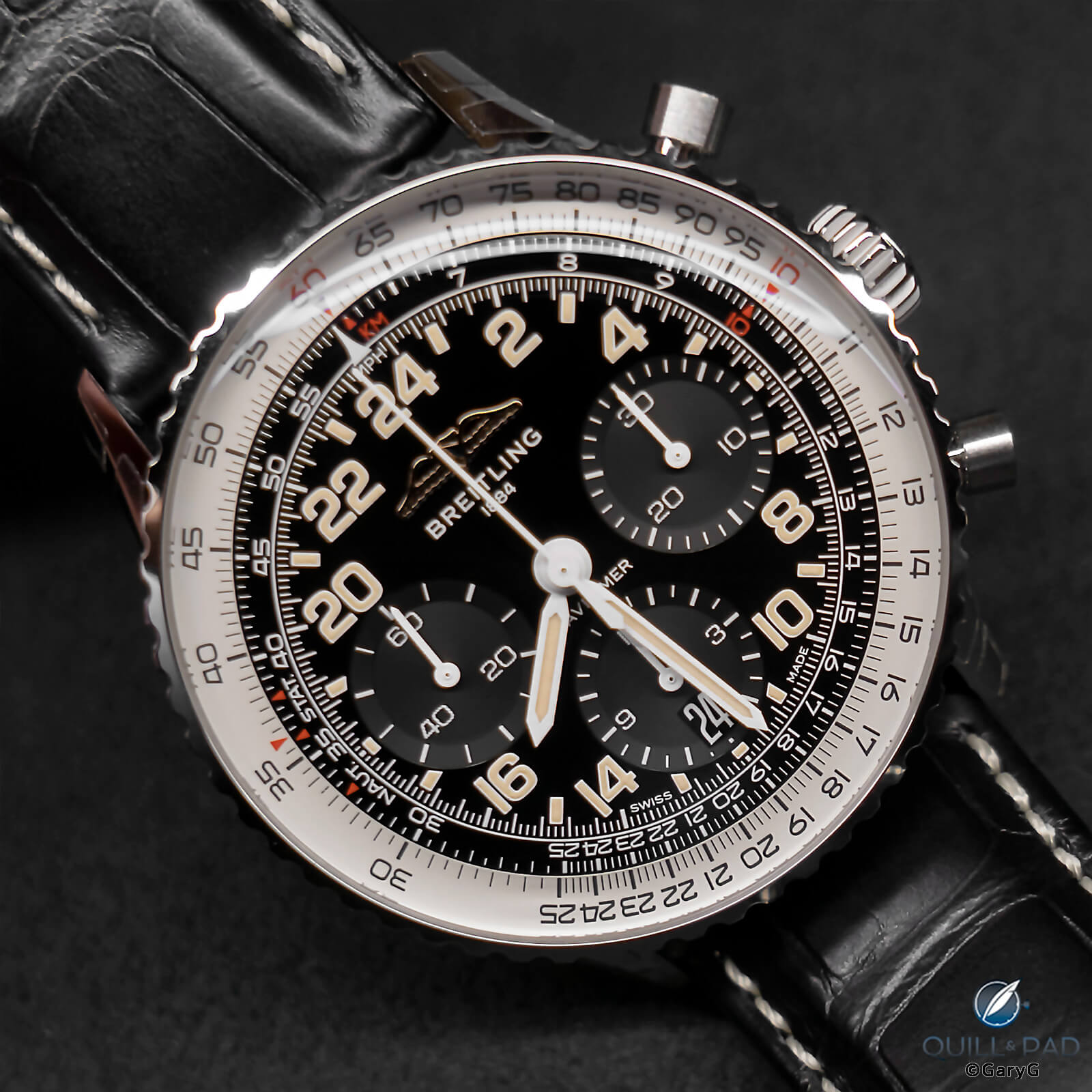 A tribute, not a replica: Breitling Navitimer B02 Chronograph 41 Cosmonaute

The rear of the watch is obviously quite different from the original as well, with a sapphire crystal case back displaying the column-wheel movement bearing various commemorative markings and additional inscriptions including the Cosmonaute name and limited-edition notation circling the rear bezel. 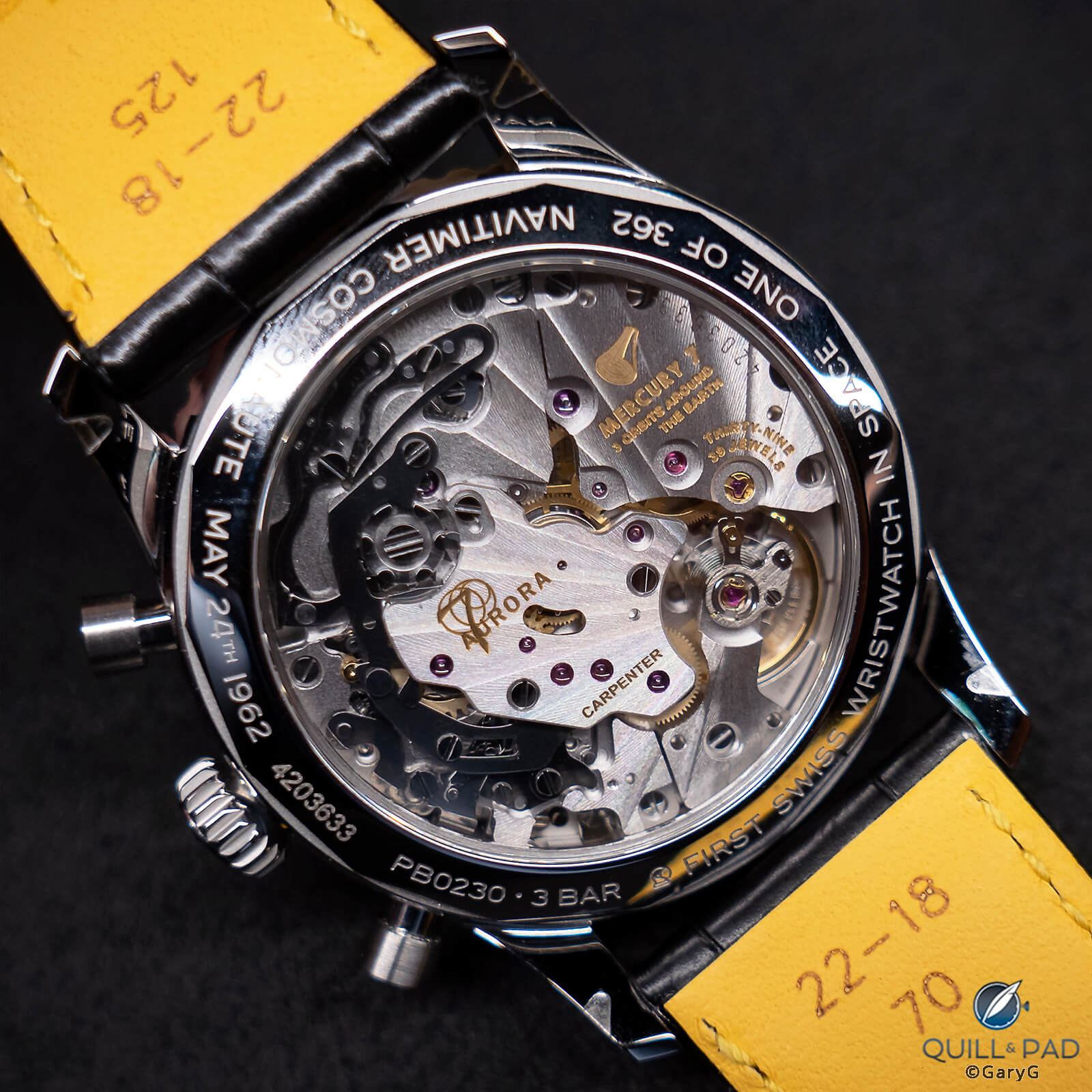 Movement and case back view, Breitling Navitimer B02 Chronograph 41 Cosmonaute

Is this watch faithful enough to the original to be a fully valid tribute? During the Q&A session, some audience members queried the logic behind the differences between the B02 41 and the Carpenter watch.

We learned that Carpenter had wished in the aftermath of his flight that the bezel had been even grippier, helping to explain the change to a fluted version. As for the reduced visibility of the word Cosmonaute, it should be noted in fairness that the watches provided to the other Mercury 7 astronauts, including Carpenter’s replacement watch, did not bear that inscription on the dial. One side note was that the term “astronaut” had apparently already been trademarked by another watch brand prior to Carpenter’s request, leading Willy Breitling to use the term more closely associated with the Soviet space program instead. 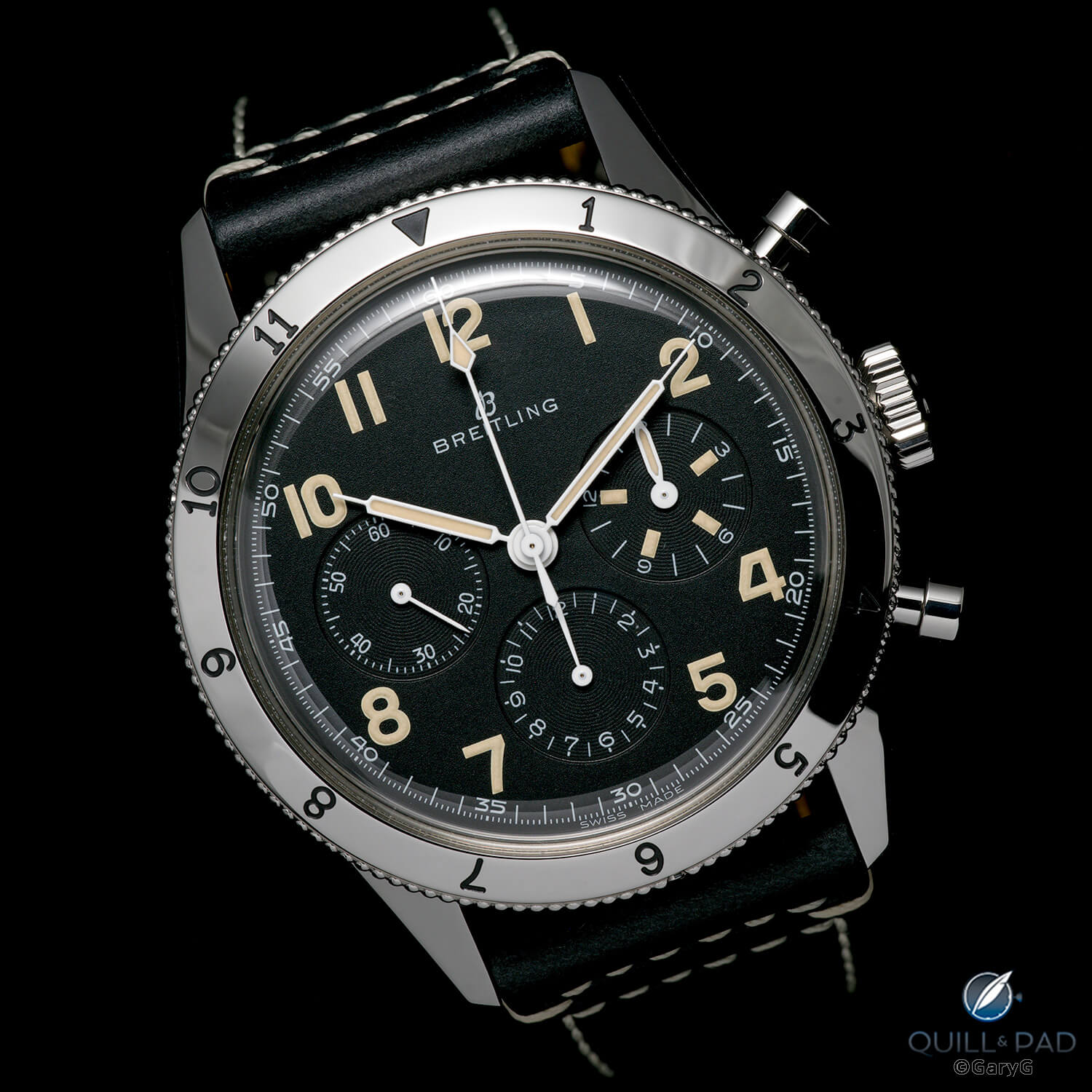 When I photographed and reviewed the Breitling AVI Reference 765 1953 Re-Edition, I mused as to whether the new watch was perhaps too faithful to the original rather than slightly modified and modernized as we’ve seen recently with watches such as the Vacheron Constantin Historiques Cornes de Vache and 222.

As a result, I’m somewhat loath to criticize the Cosmonaute for straying too far from its origins, but I’ll confess that a watch just slightly more like its ancestor would have excited me a bit more – and still, I think, would have sold like hotcakes to Breitling enthusiasts.

It’s all about the people – and their watches

One of the things that I thought Breitling got extremely right about this launch event was that they invited enthusiast collectors – lots of them – from around the world to witness the watch announcements and join in good fellowship with each other. 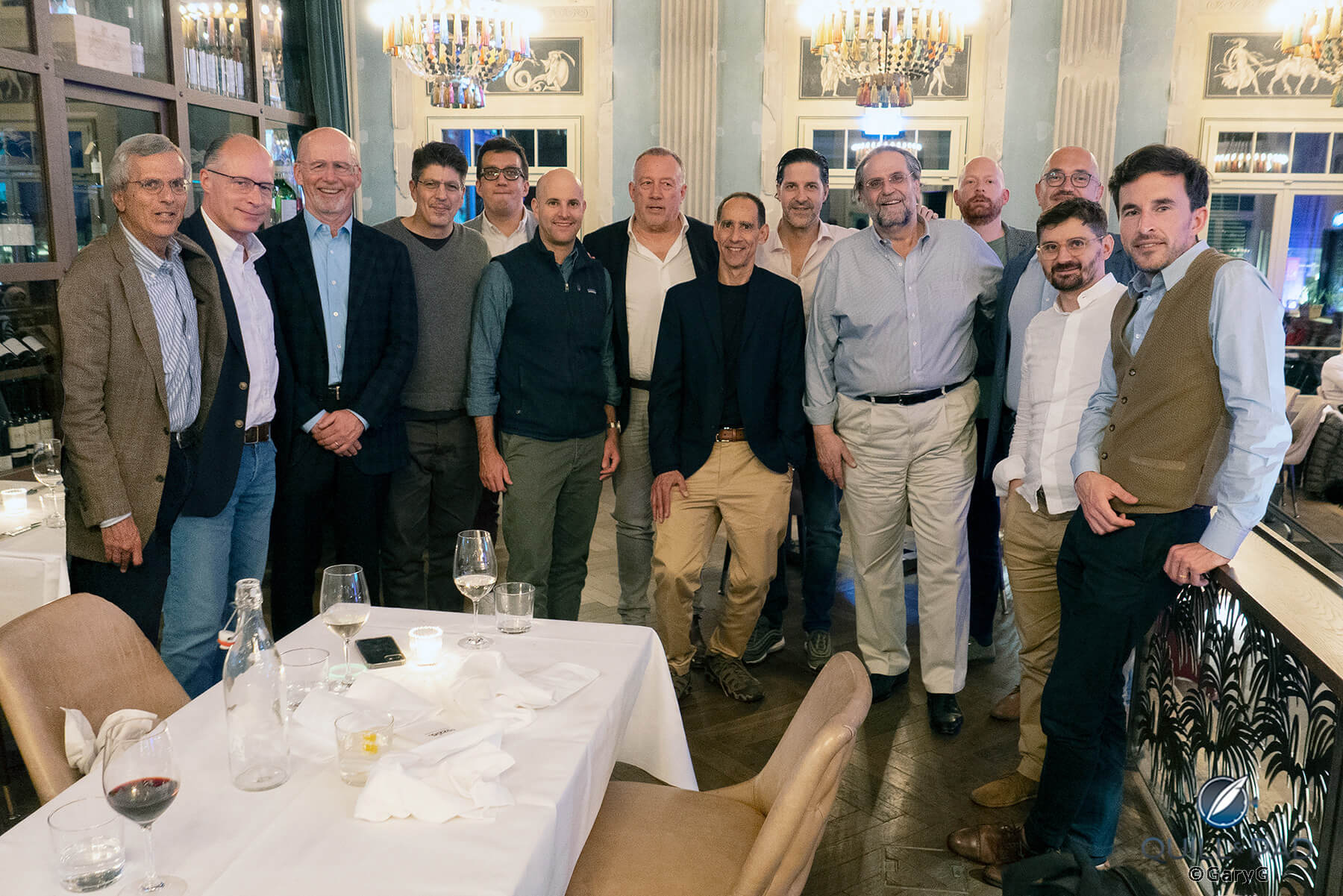 A subset of the enthusiast collectors attending Breitling’s Cosmonaute launch event, May 2022

I had arrived without a Breitling to wear, but old pal Eric Wind (@ericmwind) came to the rescue with a vintage Cosmonaute that I sported for the evening, seen here on my wrist with another vintage example brought by one of the attendees. 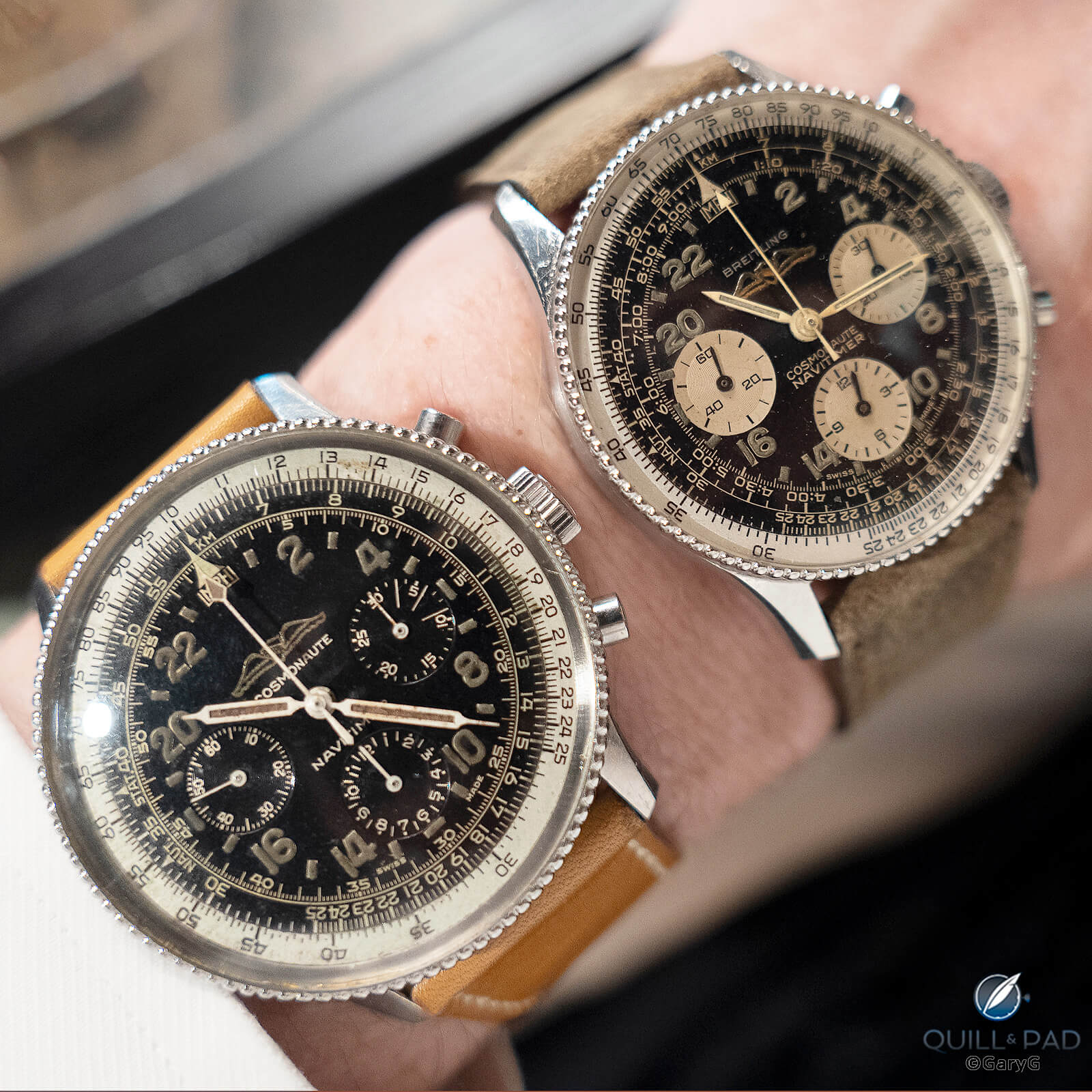 As much of a noob as I am to the world of vintage chronographs, it was fascinating to see such a variety of vintage Breitlings, and Cosmonautes in particular, in one place – and to gain a bit of an initial understanding of the whens and whys of changes from one generation to the next. 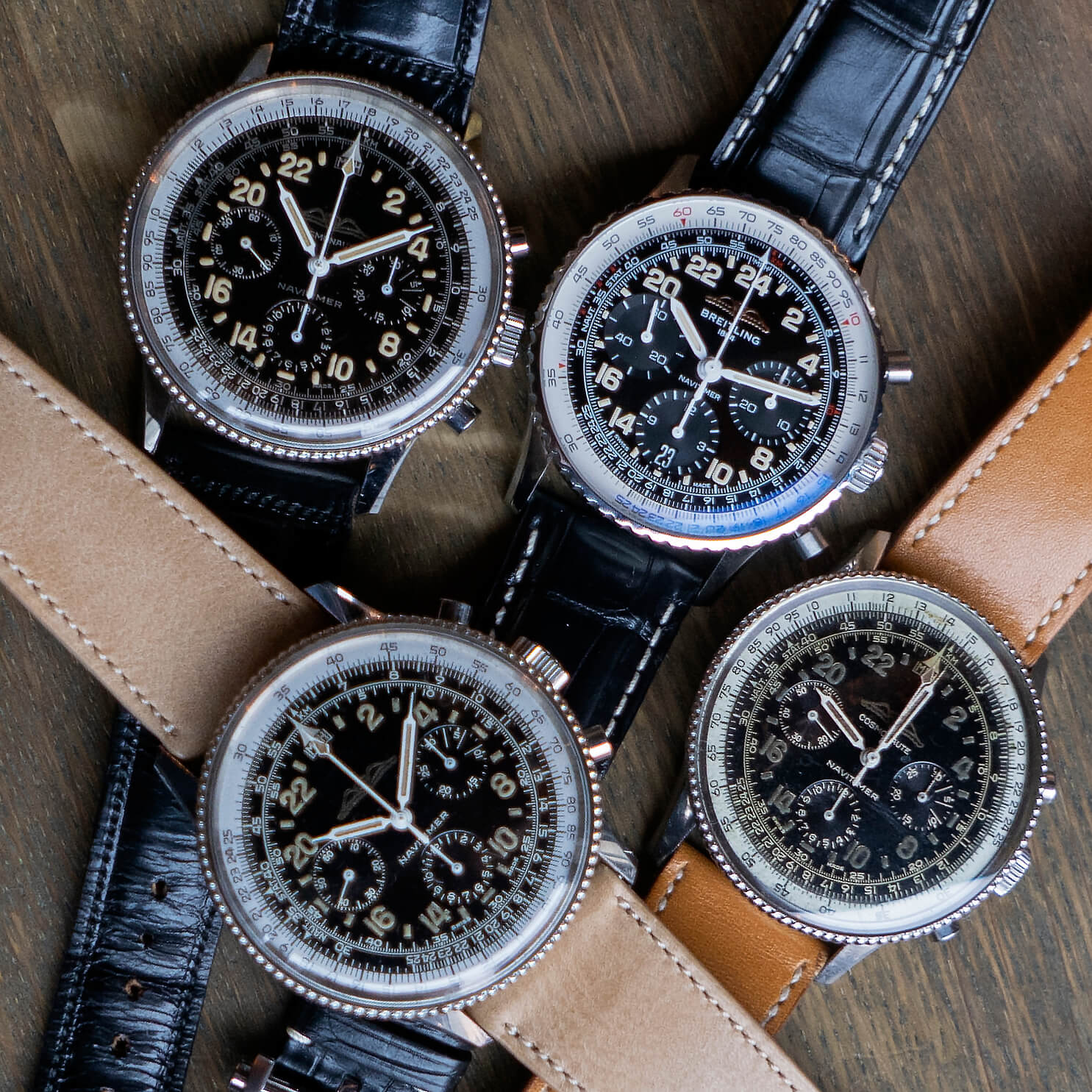 A clutch of Cosmonautes: vintage Breitling chronographs with the B02 41 Limited Edition at upper right

The collectors in attendance really emptied out their safes for this event, and some outstanding and rare examples were available to pass around and appreciate, including the Chronomat owned by American tenor Mario Lanza and gifted to his agent.

For someone of my age who grew up listening to scratchy Lanza LPs this watch evoked happy memories. And on its own merits it’s delightful, from the still-crisp markings on the telemeter dial to the sharply fluted bezel. 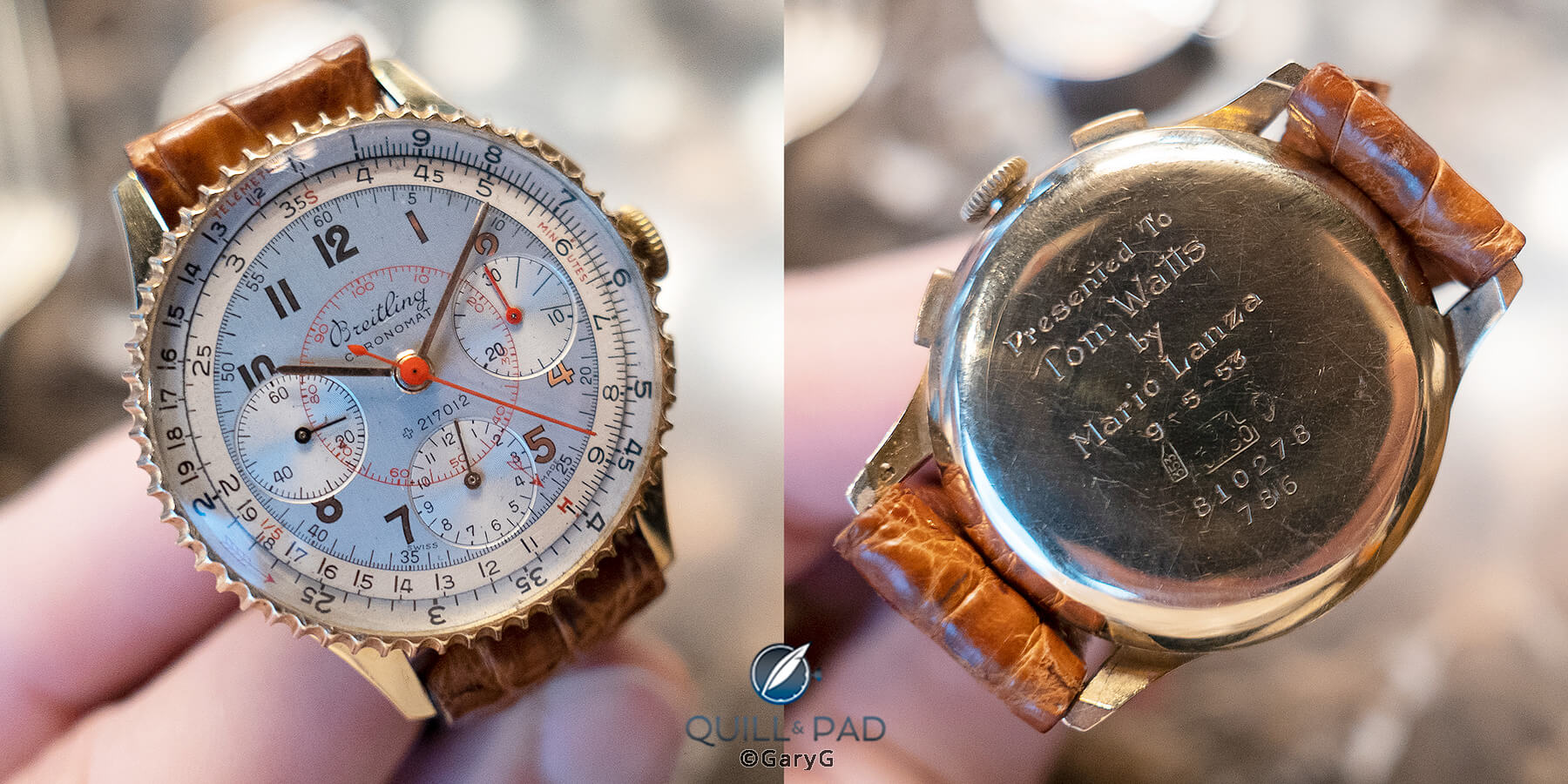 The vintage chronograph buffs in attendance, including “Mr. Heuer” Jeff Stein (@on_the_dash) were kind enough to offer positive words about the watch I did bring with me, my Mathey-Tissot Type XX, seen below next to Fred Mandelbaum’s remarkable vintage Breitling AVI. As Mandelbaum is known for collecting only the very best examples, I’ll confess that I was very pleased that the condition of my piece stood up well when compared to his. 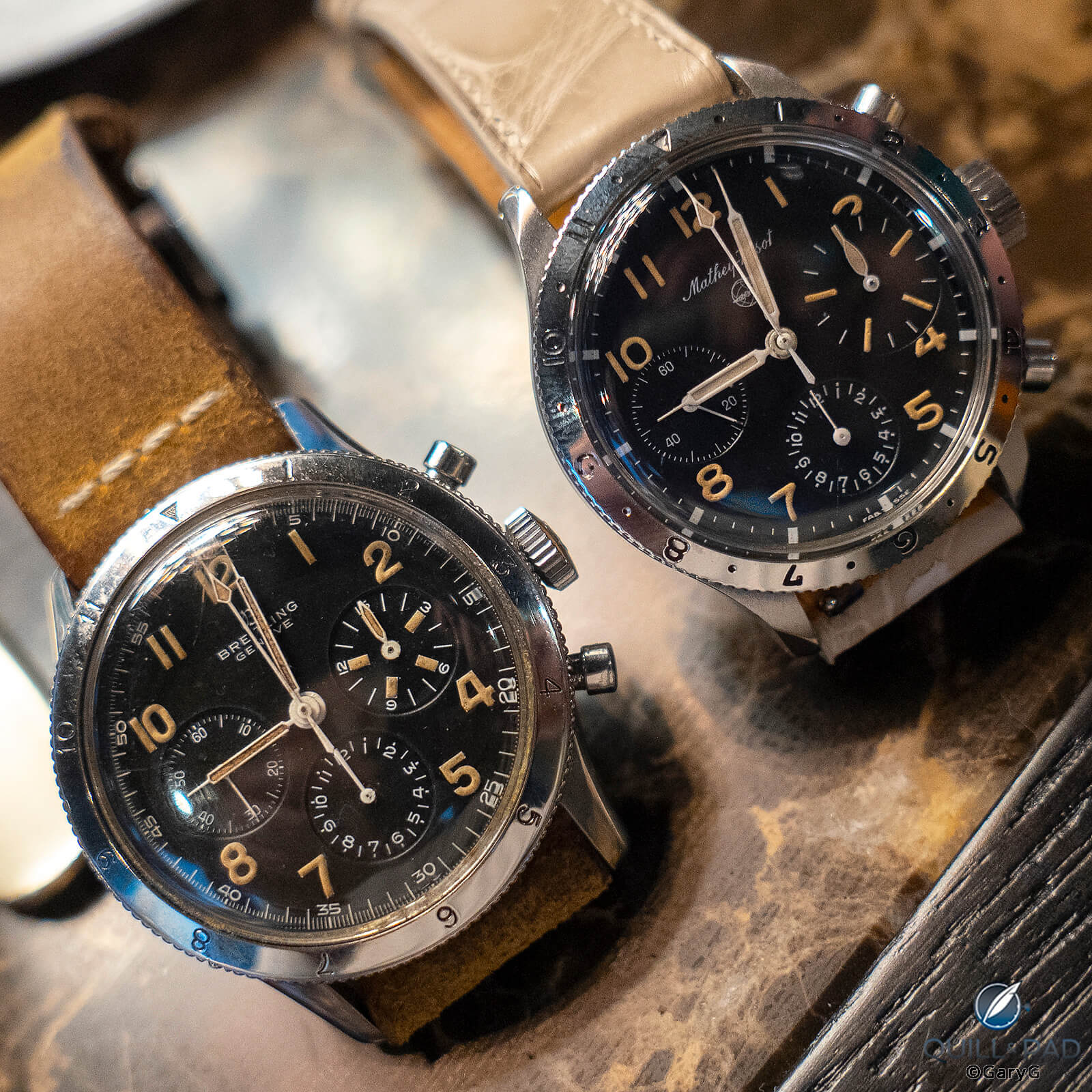 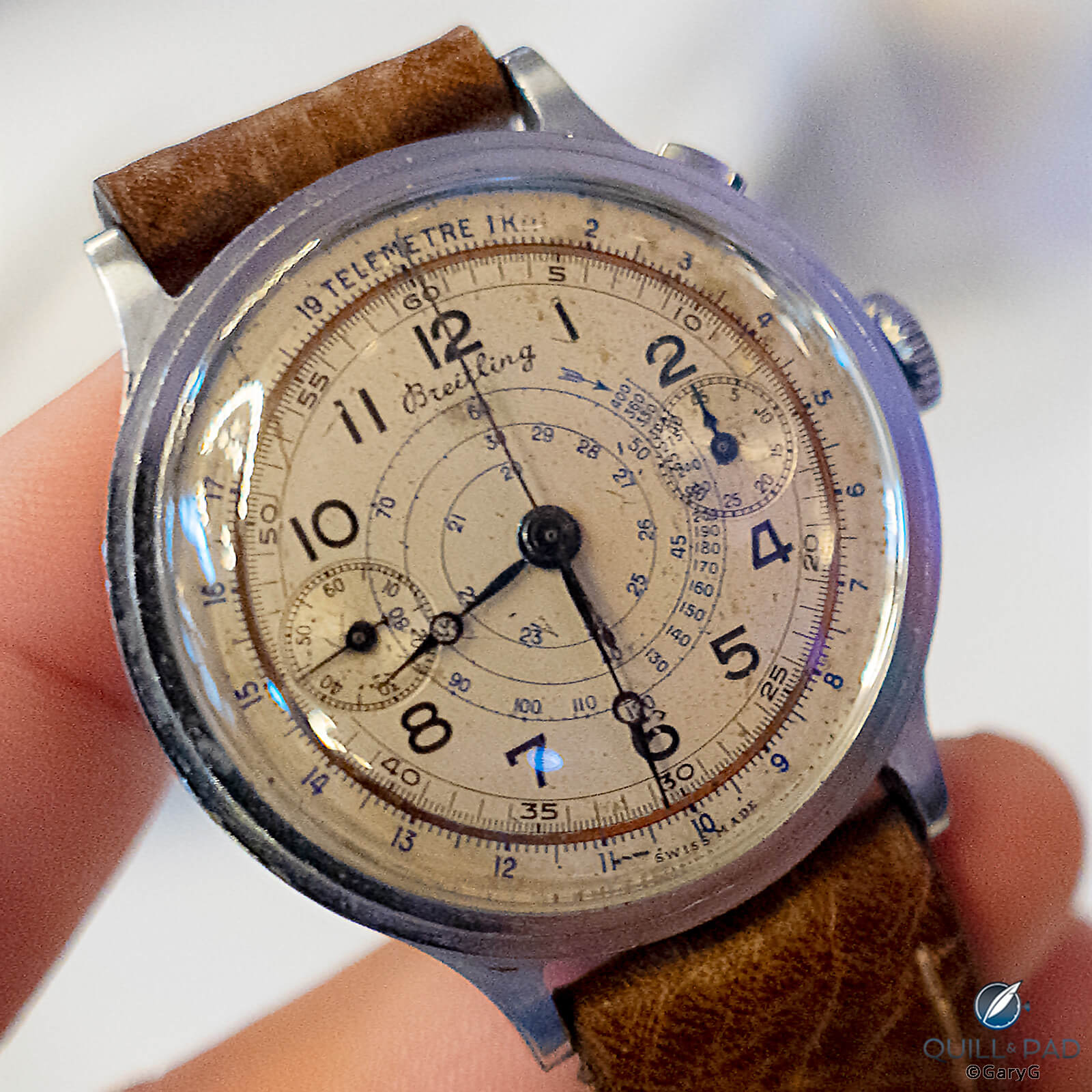 But the topper for me was a 1910 oignon-crown monopusher with an unsigned but still gorgeous enamel dial and with the chrono still functioning perfectly. 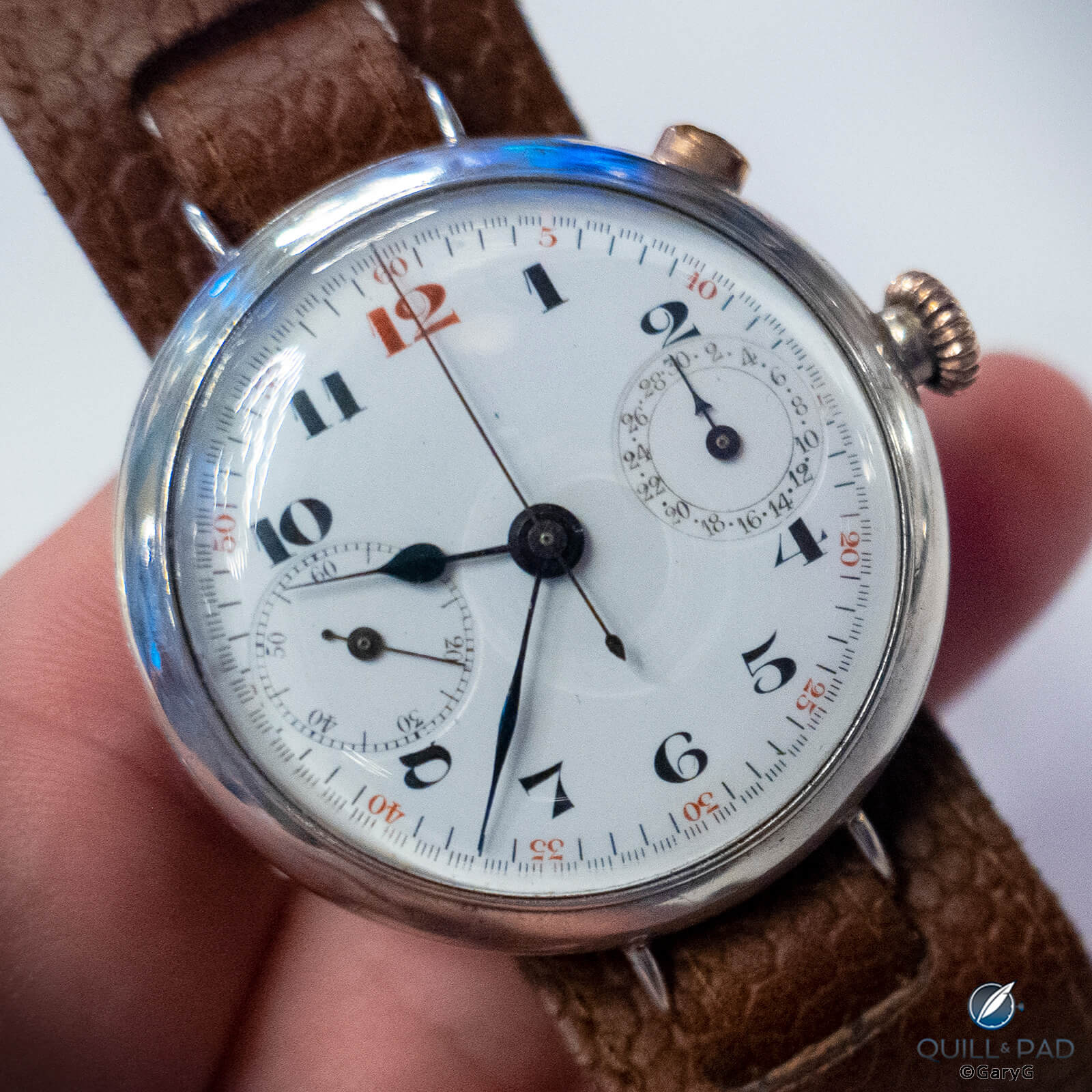 Over 100 years young: a 1910 Breitling chronograph

It was great to get to know a whole new group of passionate collectors, and to sit at dinner with Sylvain Berneron, Breitling’s young creative director (@holographic_hammer) and hear his thoughts on design, meshing the classic and modern at Breitling, and his impressions of the work of a number of independents we know in common.

Breitling clearly didn’t need to go to the effort and expense of organizing this event simply to sell the 362 examples it will make of the Navitimer B02 Chronograph 41 Cosmonaute; as of this writing the bracelet version is already sold out and I’m sure the strap version will soon follow.

As an exercise in reinforcing a new market positioning for the brand that honors the past while creating the future, and in making a clear investment in nurturing an enthusiast community around Breitling’s watches, I think that it was time and money extremely well spent – particularly in the attention paid to collectors and vintage chronograph scholars it set an example from which others can learn.

As I was sitting down to write this article, I was surprised to see a quite faithful re-creation of the Carpenter watch in a surprising place: independent watchmaker Ludovic Ballouard’s Instagram page (@ludovicballouard). 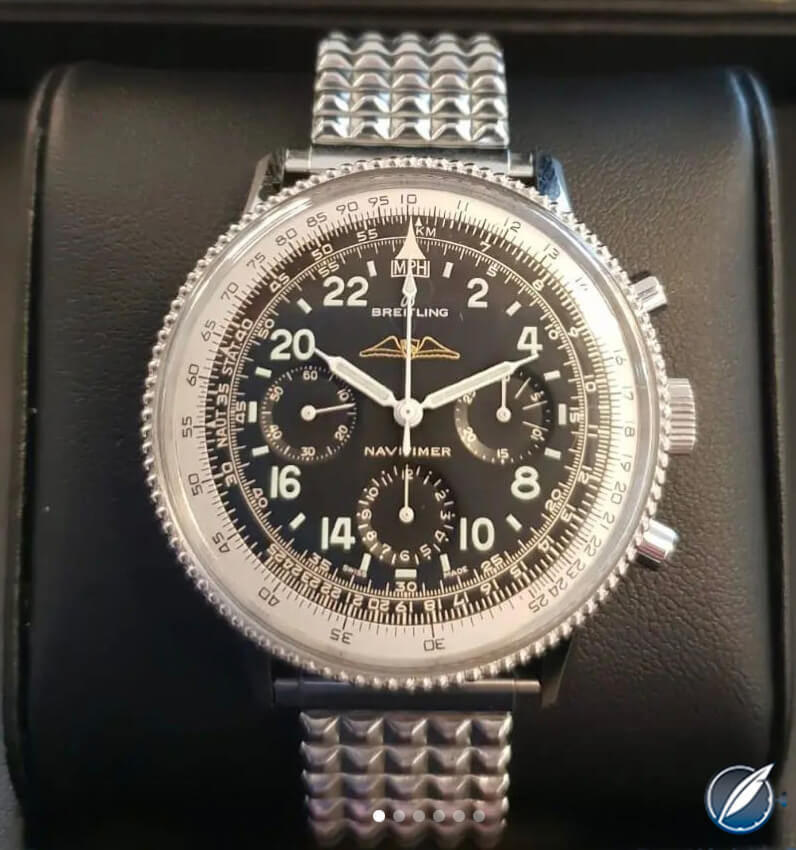 In his post, Ballouard tells the tale of creating this piece as a commission project and the steps involved, right down to the painstaking machining and filing of the correct number of metal pearls around the bezel. While some details such as the inclusion of the Breitling logo on the dial and the shape of the hands are not fully correct, it appears that Ballouard did have access to the original Carpenter watch as he did his work and the result is quite amazing, especially given the modest resources he could bring to the work as a one-man operation.

Reinvigorating a brand like Breitling requires taking advantage of all the available resources. And in dipping into its historical catalogue for periodic revivals, updating existing standard references and creating new ones, tapping youthful design talent, and drawing on and expanding its network of stalwart loyalists, CEO Georges Kern and his team seem to be doing just that.

I’m already looking forward to seeing what’s next from the brand, and in the meantime will be staying in contact with friends new and old I had the pleasure to see in Zurich! 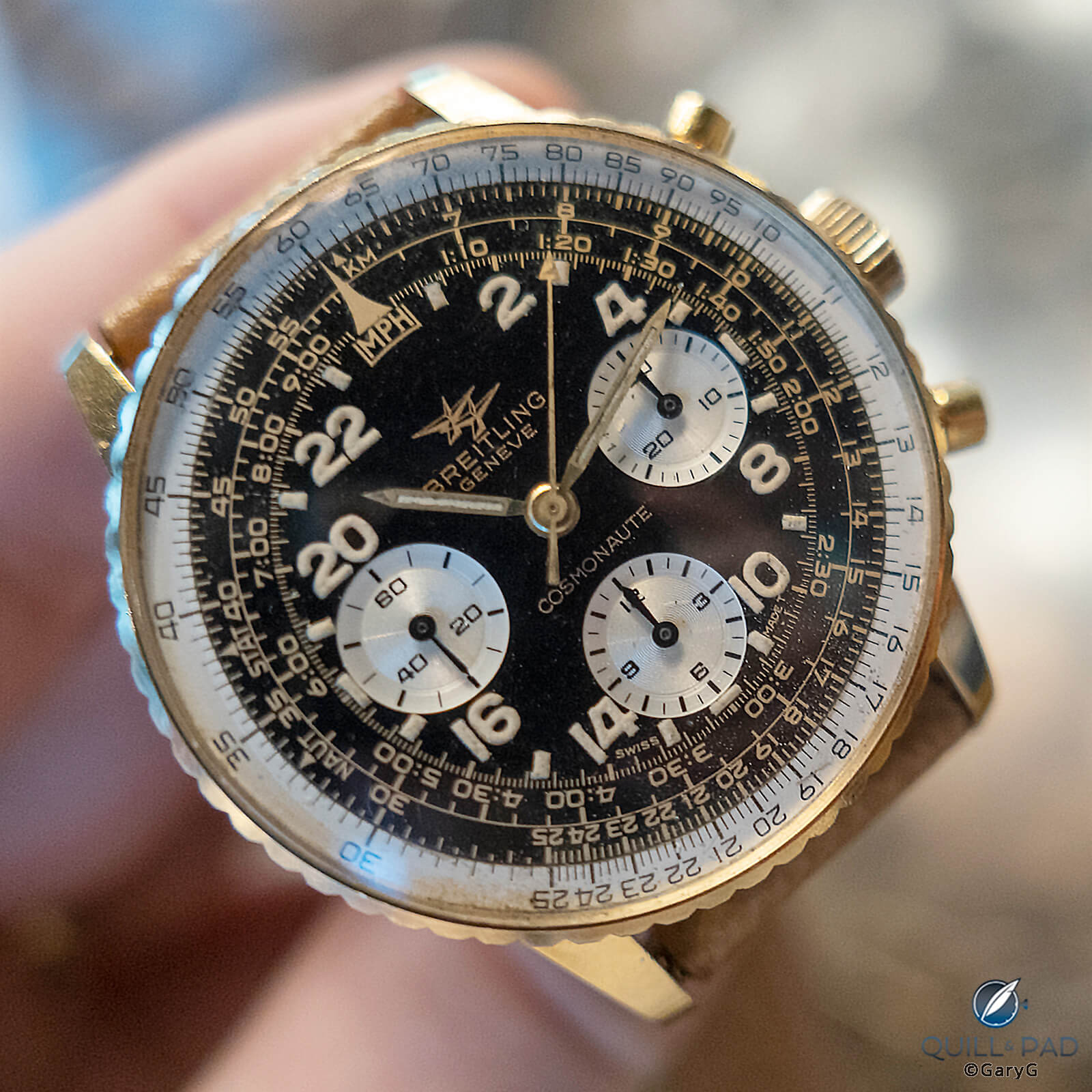 Breitling And Bentley Part Ways, But How Will They Move On? A Look At The Past And Possible Futures

3 New Breitling Vintage-Style Watches, Including A Gorgeous Split-Seconds Chronograph, For The Premier Collection

Our Predictions In The Men’s Complication Category Of The 2022 Grand Prix d’Horlogerie de Genève (GPHG): Did We Find The Best Unisex Watch Of 2022?