A long, long time ago, the people of the mystical land called Schwyz looked up to the sun shining on the mountains and were happy in their villages. Over generations, the outside world passed through and ate of their larders, but life stayed peaceful in the valleys among the cows. Eventually, life changed and became busier, leading the people of what was now known as Schwiiz to find a need for planning their days more precisely. This led to the invention of a thing called time, which many thereafter have generally regarded as a bad move.

But with the invention of time came inventions for keeping track of time, something the Switzer people (who changed the name of their land yet again) began to focus a lot of their energies on creating. Eventually, the Swiss, who took a mighty long while to settle on a name for themselves, became the best in the world at creating machines that kept track of everyone’s favorite feature of existence. They became so good, in fact, that they began to hold competitions to see just how good they were, in which craftsman calling themselves watchmakers would offer up their machines for combat.

Perhaps combat is an extreme designation, but many of these so called “watches” (a misnomer if I’ve ever heard one) would go head to head for grueling periods of operation, with machines failing and dying until only one was left ticking. After weeks and months of trial, one watch would be crowned the most accurate in all the lands, not just in the valleys of Switzerland. These competitions lasted for generations until, after almost two centuries of masterful mechanical creations, a new invention surpassed everything that had come before by leaps and bounds, proving the precise measurement of time to be easy and almost trivial. 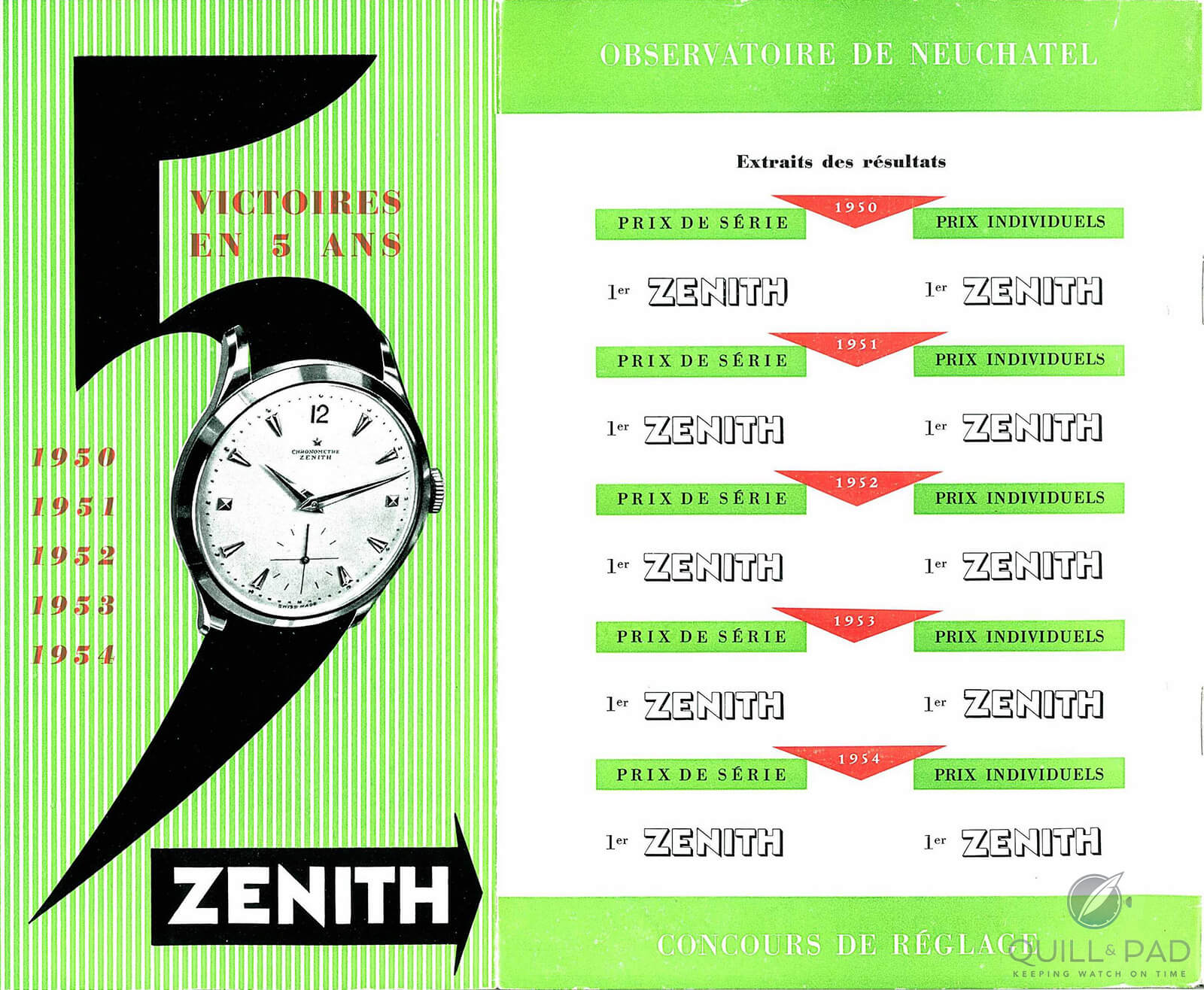 But near the end of the competition era, just a decade or so before they were deemed obsolete, a (quite literal) star was making its name known as the most accurate around. It was regarded as the cream of the crop, the ultimate watchmaker, a group that had reached the zenith of skill. Funnily enough, this grouping of craftspeople changed its name to Zenith in 1911 (the Swiss really like to change names, it seems) upon winning the Grand Prix at the 1900 World’s Fair for its “Zenith” movement, so named because founder Georges Farve-Jacot believed it represented the best in watchmaking.

What is even more incredible is that after seven decades carefully stored away in the Zenith archives, the brand has decided to allow a few of the original, award-winning movements to find their way into watches for the very first time, thanks to a collaboration with legendary independent watchmaker Kari Voutilainen. 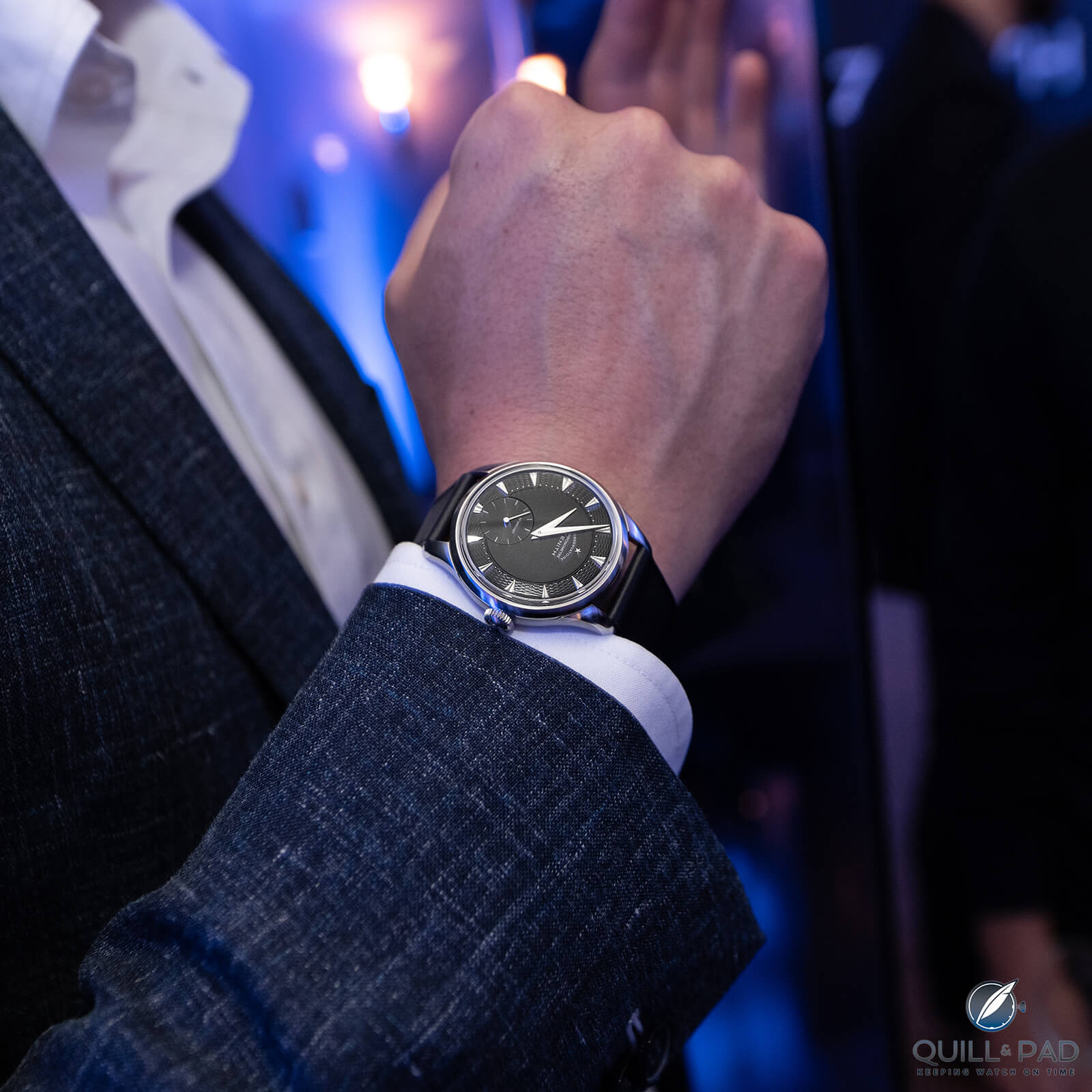 What exactly does a three-way collaboration look like? In this case it looks like a very classic three-handed watch with subsidiary seconds dial, sterling silver black matte dial, polished rhodium-plated German silver applied hour markers, and rhodium-plated gold hands. The platinum case adds some heft and luxury, but the simplicity of the styling and lack of extreme decoration combine with a more subdued Comblémine-made dial to keep the watch rather low key considering its spinoff from the utilitarian sibling that housed the production version of Caliber 135. 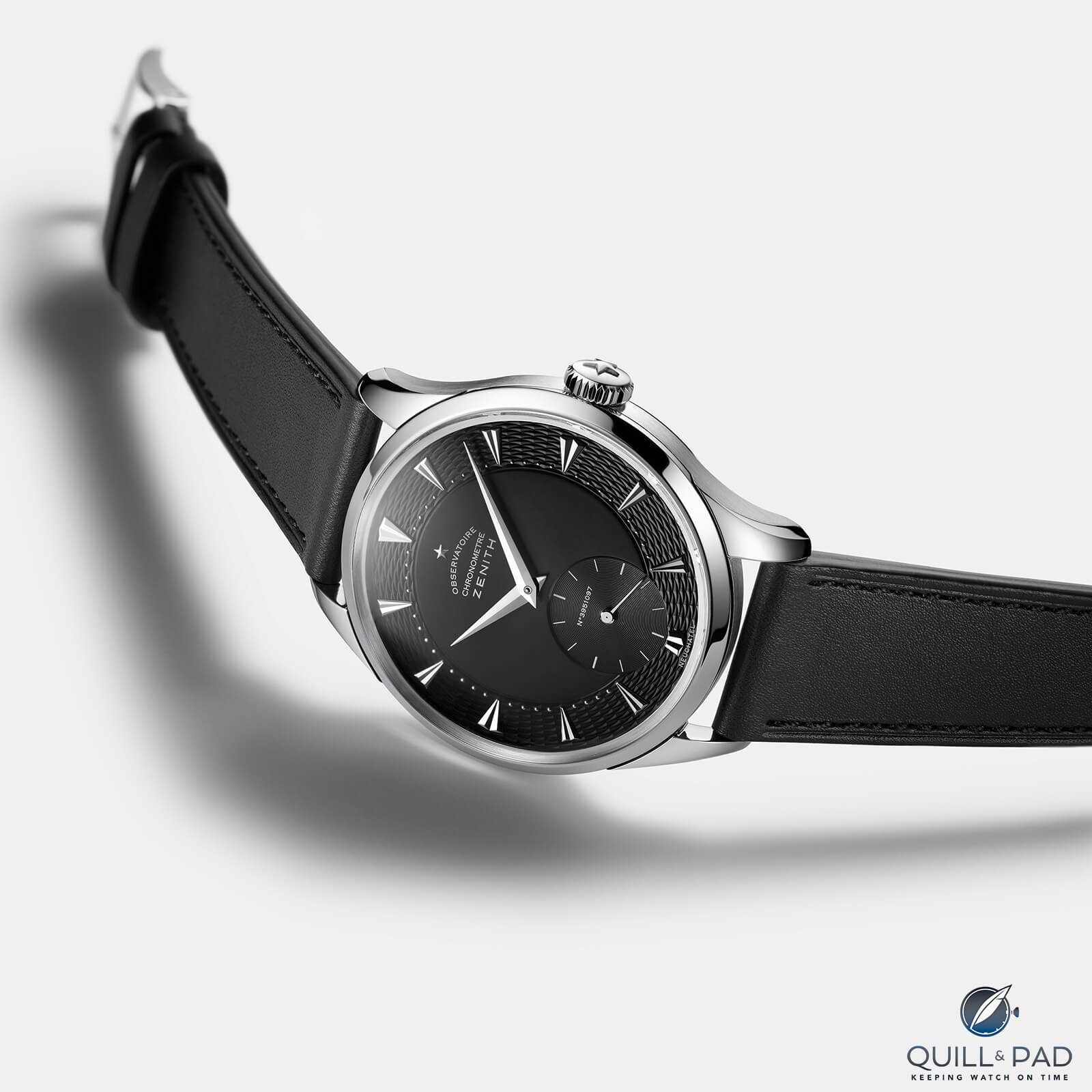 The collaboration was born of an idea that two well-known industry figures, Aurel Bacs and Alexandre Ghotbi of Phillips Watches, had while discussing the heritage of Zenith with CEO Julien Tornare. As with true history buffs, conversations wander to highlights of the past. And with Zenith that was the observatory competitions of the mid-twentieth century. These were dominated by Zenith, especially with historic Caliber 135-0. The brand had taken production Caliber 135 and reworked it to maximize chronometric performance just for the chronometry competitions, renaming it Caliber 135-O.

These calibers were never placed in an actual watch and only housed in a special wooden case for transport to and from the competitions. After the grueling tests and their subsequent victories, the movements would be transported back to Zenith headquarters and placed in storage for safekeeping with no real plans for them other than as documentation. Surely some improvements were made to the standard Caliber 135 after every successive victory, but the actual winning calibers seemed destined to collect nothing but a little dust and disregard in the archives. 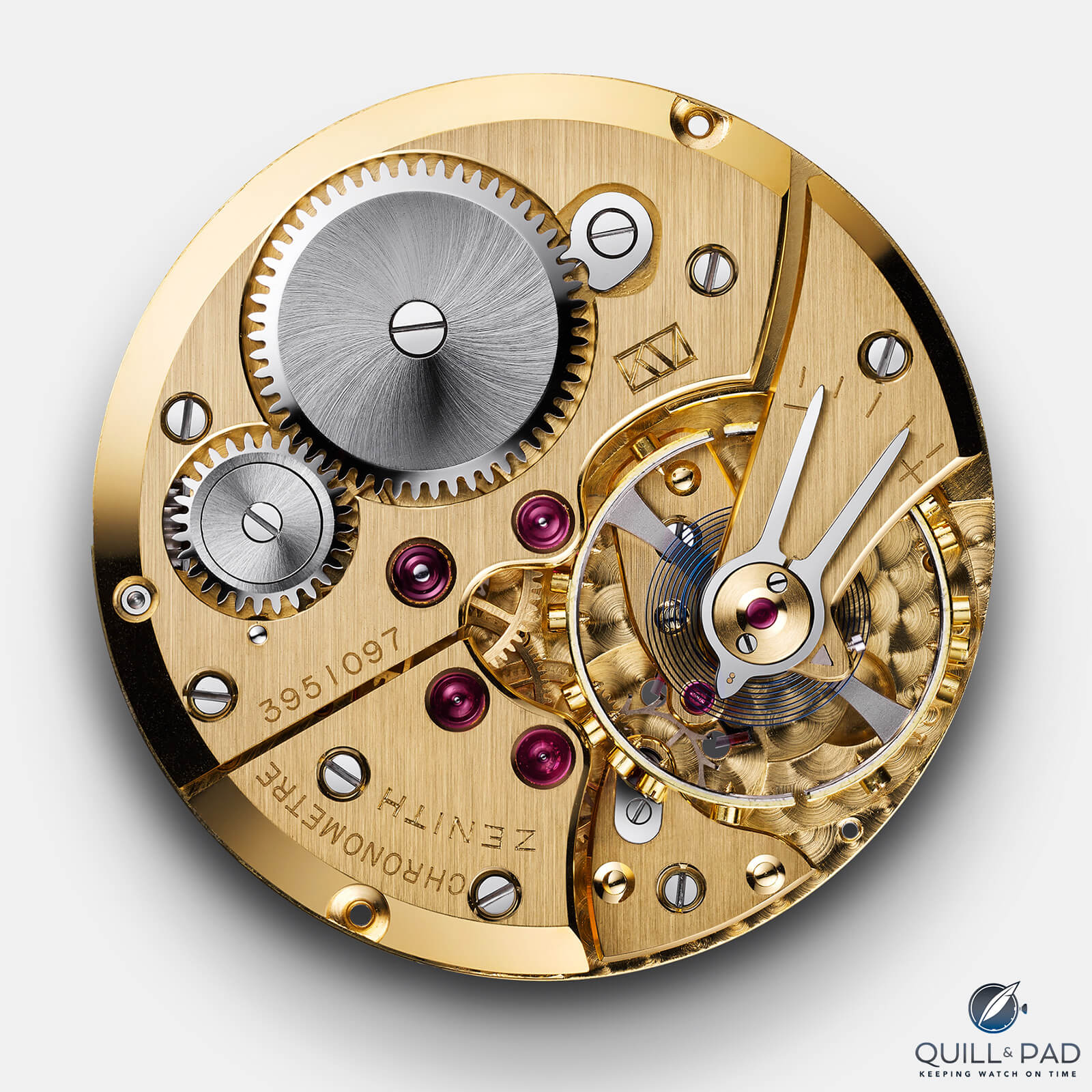 Now 10 of those award-winning movements (the actual movements that endured months of arduous testing) have finally found a home 70 years later in their first cases. The movements were selected specifically for their provenance, each one coming from the years 1950 to 1954 when they all won first place in observatory chronometry competitions. But you couldn’t just grab 70-year-old movements out of storage and toss them into any random case. They needed to become pieces fit for the honor, which required a skilled and knowledgeable hand.

And that is where the mighty Finn, independent watchmaker Kari Voutilainen, enters the picture.

Updating the movements for wear in a wristwatch was by far the hardest part of the endeavor because these 135-O calibers were skillfully regulated and hand-worked by Charles Fleck or René Gygax, two Zenith chronométriers who regulated all the chronometer competition pieces to their award-winning standards. Since the movements were kept safe and never cased, the precision adjustment and regulation remained 70 years later, but it needed to be maintained through the restoration and casing process.

René Gygax at his bench regulating a Zenith caliber 135

Chronometry nerd side note: René Gygax is the father of Pierre Gygax, an engineer specializing in chronometry who developed the 2.4 Mhz MegaQuartz for Omega and worked at Ulysse Nardin from 1997 until his retirement in 2015 where he was instrumental in introducing nickel-phosphorus LIGA, silicon, and finally synthetic diamond technologies into the brand’s cutting-edge timepieces.

This might seem like a minor point, but the level of precision needed to win these competitions is based in fractions-of-a micron tolerance (<0.001 mm) and hairspring adjustments varying by thousandths of a degree of curvature for the terminal curve and spiral. Not to mention that the exact level of lubrication, tightness of bridge screws, and even the precise amount of endshake (space between pivots and jewel bearings) will all combine to change the long-term chronometric performance of a watch.

Restoration often can change and modify nearly all these factors depending on the level of restoration and the amount that updated finishing and disassembly impacts parts of the movement. This is why the restoration was very difficult and finishing kept rather simple and clean. 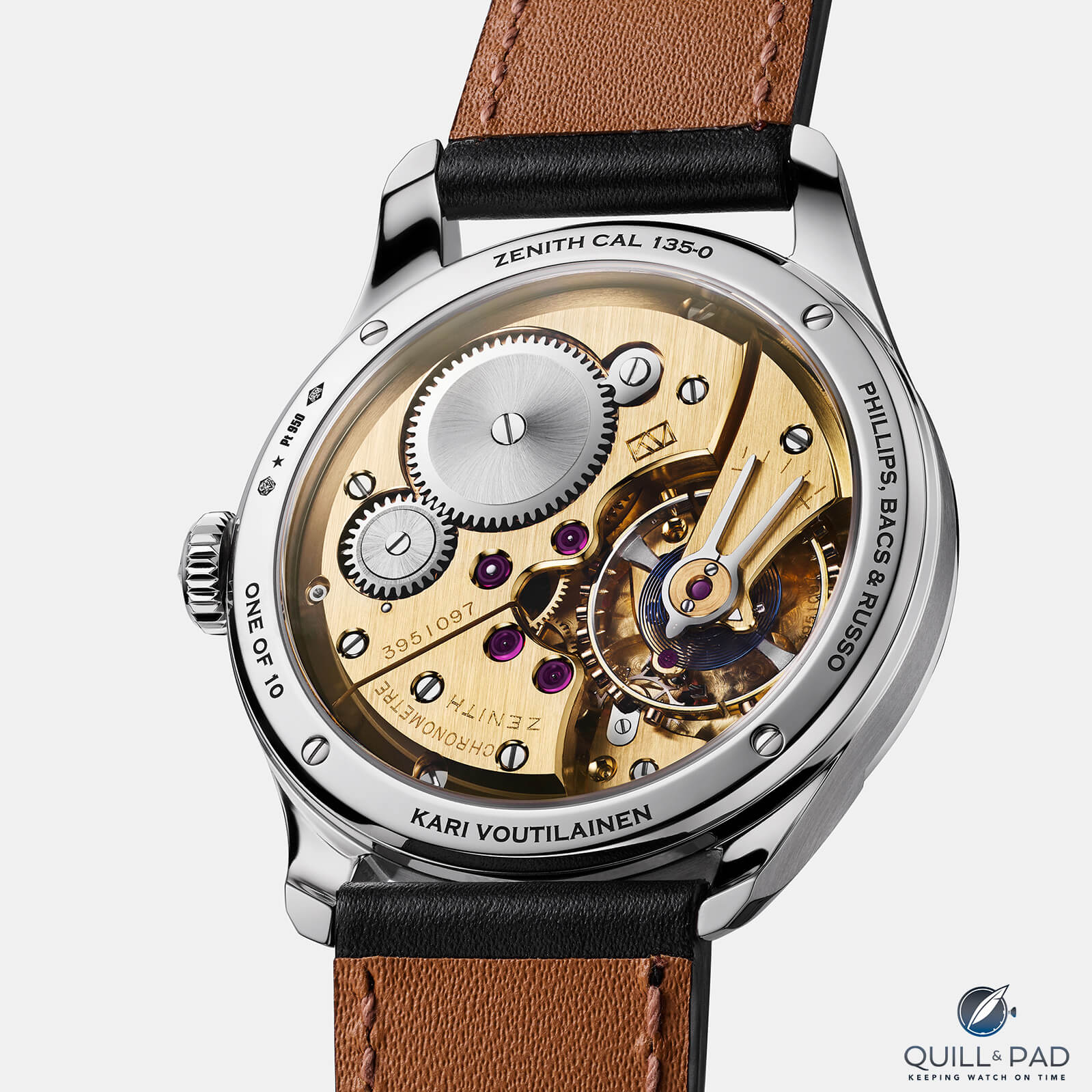 It would have been easy for Voutilainen to undertake his typical impressive movement work, but he needed his skills and precision to maintain the movement’s accuracy while simply making sure it is in good, clean working order. The finishing was necessary as the original 135-O movements were mostly unfinished as that wasn’t necessary for competition, so Voutilainen brought them up to the desired state with brushed and polished surfaces, some nice beveled edges, and an overall clean look.

The dial made by Voutilainen’s dial manufacture Comblémine is fairly straightforward with an exterior ring of guilloche, a smooth center dial, and a ribbed subsidiary seconds dial, all finished in matte black. The hour markers are very retro, but the most impressive aspect of the dial is the very tiny, applied minute markers, little polished domes barely poking out of the guilloche ring. 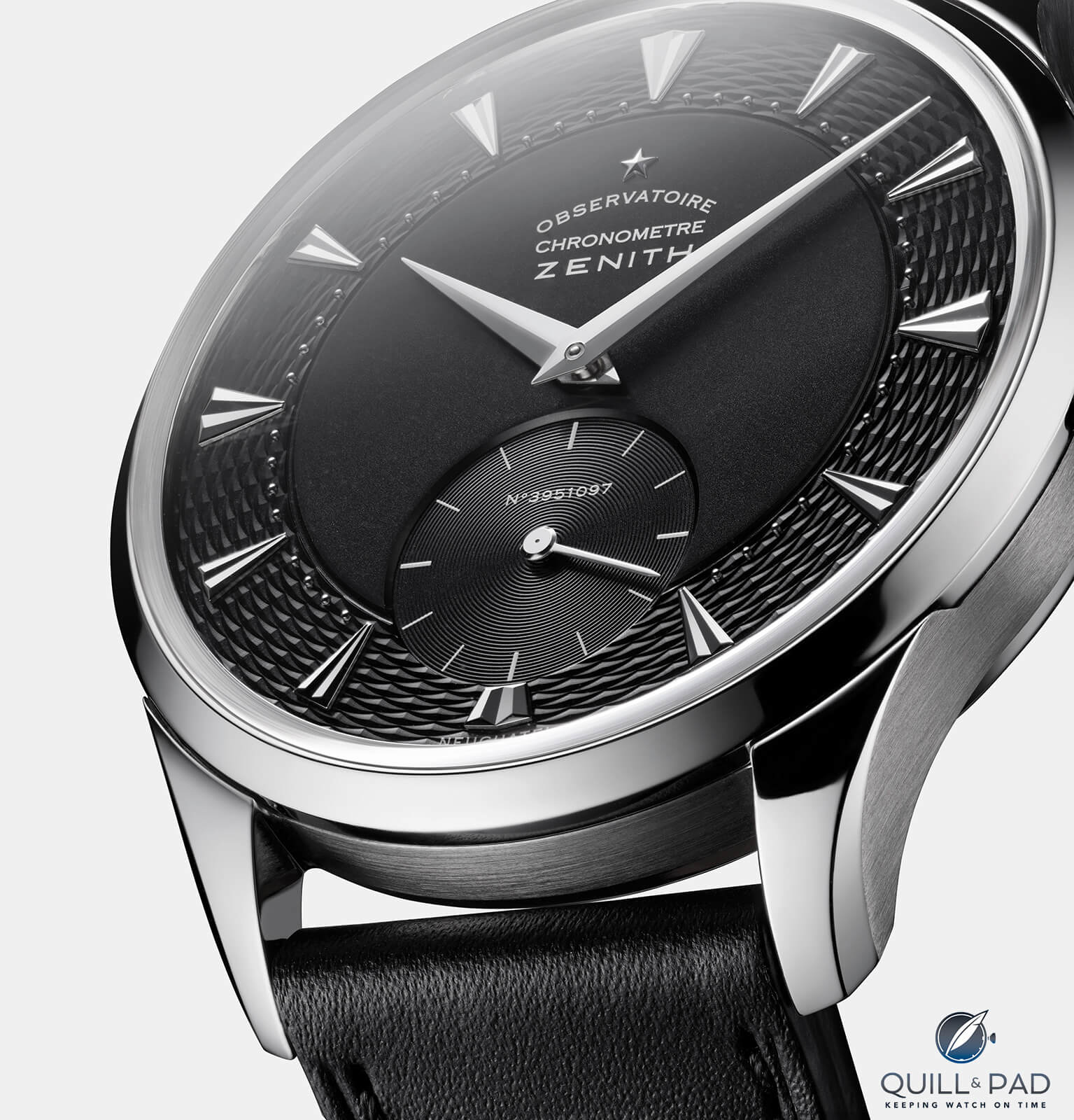 The case, dial, and hands were kept simple and in line with vintage styling for a dress watch, but the printing on the dial still highlights the history of the movement inside. On the subsidiary seconds dial is printed the caliber’s serial number, something that is traceable in the Zenith archives to demonstrate it was an award-winning movement. At the bottom of the dial is printed “Neuchâtel,” which represents the place where the caliber inside won the top prize as a chronometer.

This decision displays what the Calibre 135 Observatoire is about: the specific movement and its chronometric provenance. It isn’t about the insane artistry that Voutilainen can bring to a watch; it isn’t about the collaboration with Phillips by Bacs and Russo; and it isn’t even about Zenith as a brand. The caliber is meant to be the star, and Zenith is just proud to say that it was responsible for its creation all those years ago.

A watch that is made ultra-precise today is a feat of engineering, but a movement that was made ultra-precise seven decades ago and is still precise today, that is a part of horological history. It helps that a little more than a decade after the five-year winning streak the entire industry would be turned upside down with the invention of quartz movements, so the last hurrah of chronometry competitions is something to look back on fondly. 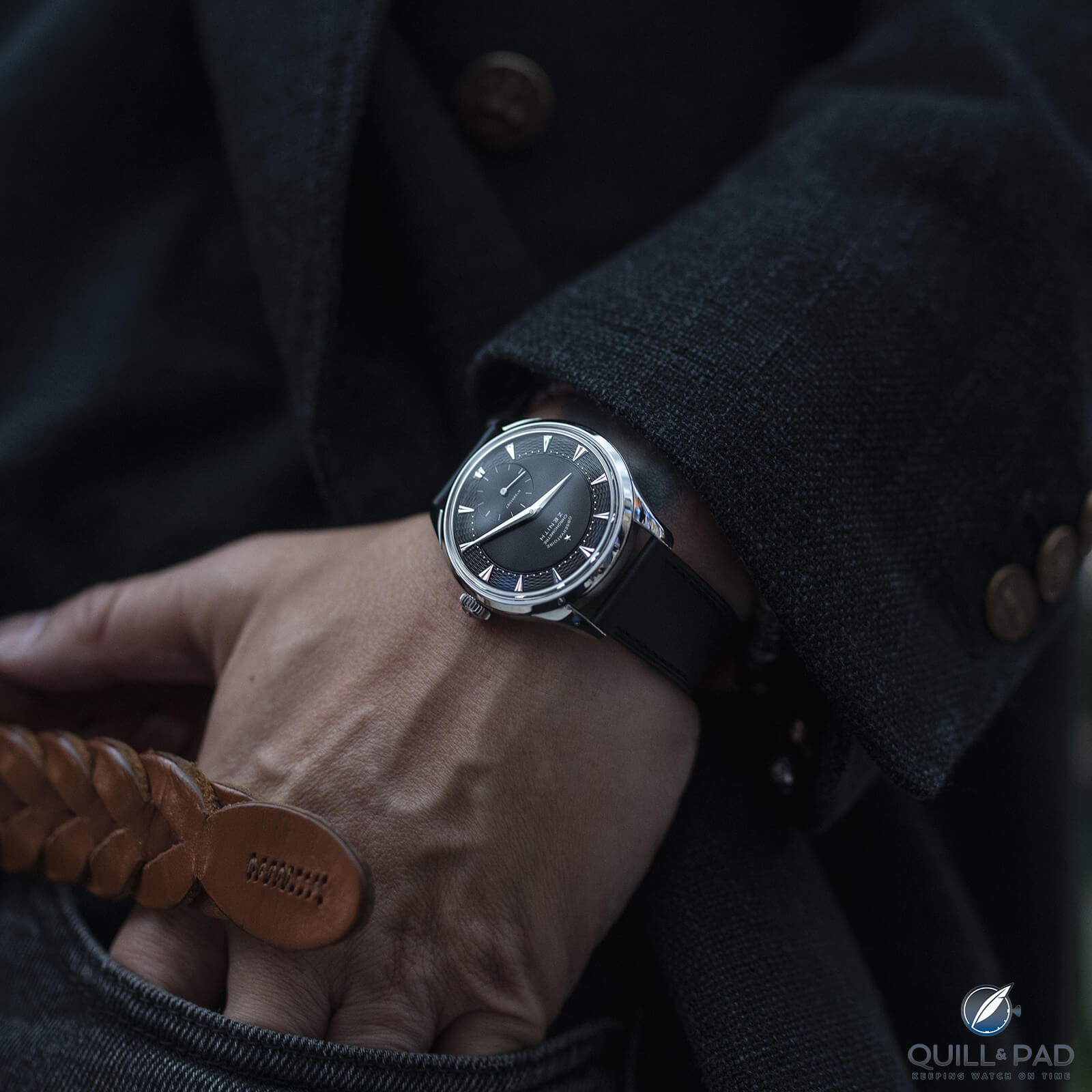 These watches, which have original movements with no modern shock protection, are definitely delicate specimens of horology. They will not, and should not, replace your modern daily wear watch, especially at the hefty price of 132,900 Swiss francs. But they are a piece of history rarely ever seen simply due to the fact that they are essentially museum novelties that just so happen to have found their way into a watch you can actually wear on your wrist.

For a brand that has 2,330 chronometry prizes to its name, being able to own one of only 10 of the actual movements that won those prizes is a rare treat for the person who has everything else.

I’m not one of those people, so instead I’ll just break this watch down!

Why Accuracy Matters To Me, And Why It Should Matter To You Too

International Chronometry Competition 2019 Decides That The Best Way Out Of A Hole Is To Keep Digging. And Expects Us To Watch