Despite having made more than 100 pièces uniques among a grand total of approximately 1,500 timepieces spanning 42 years of a truly inventive career, independent watchmaker and co-founder of the A.H.C.I. Svend Andersen has become particularly known for the worldtimer, a complicated watch that displays the time in 24 time zones.

In fact, Andersen has become fairly synonymous with this complication that shows time all over the world by using reference cities to indicate time zones. 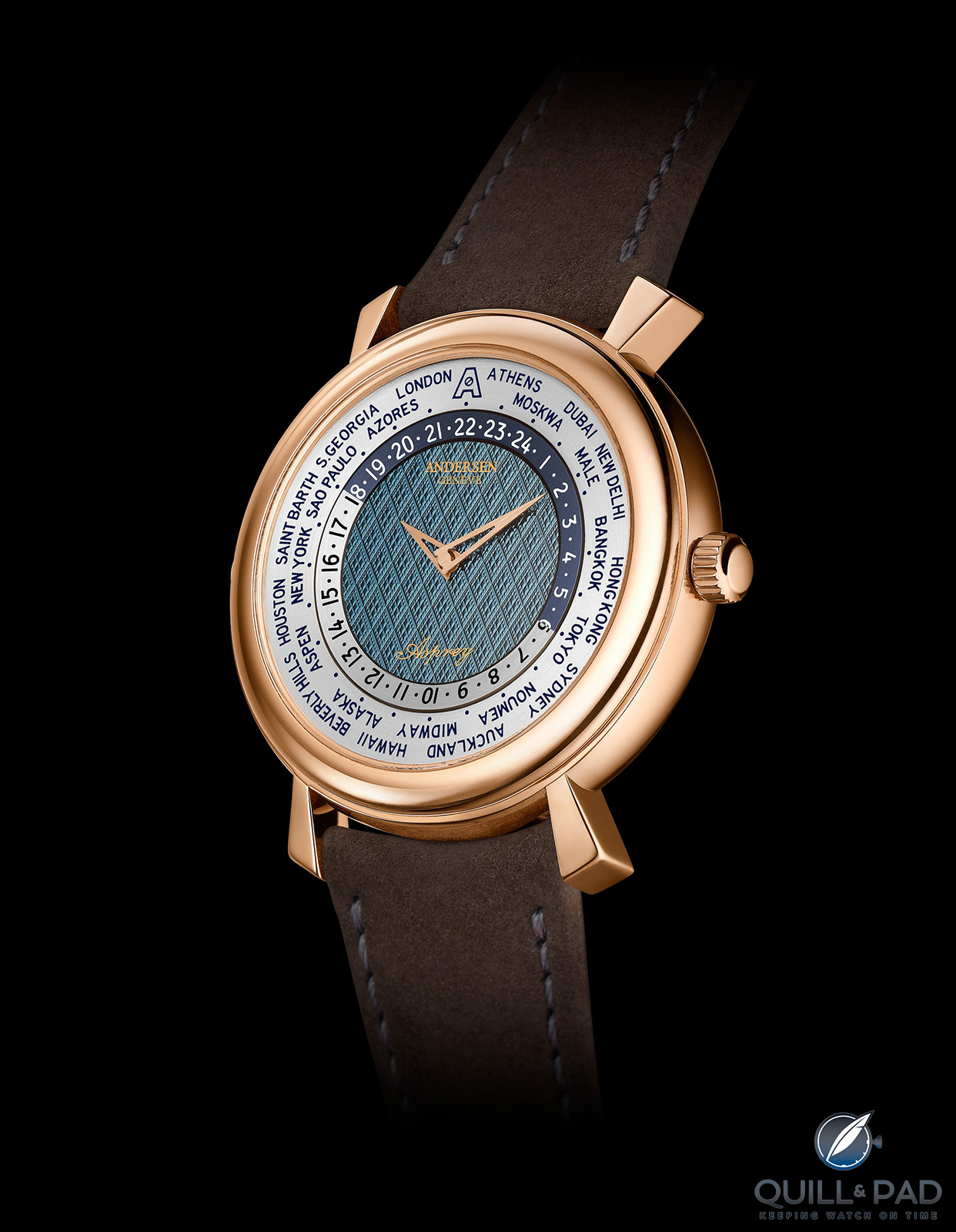 World time and genesis of the worldtimer

Sanford Fleming (1827-1915), Canadian Pacific Railroad’s chief engineer, was the first person with a vision of international time standards. He first published his ideas regarding a system of standardized time in 1876; in this he described 24 time zones each comprising 15 degrees of longitude with each zone one hour apart.

A unique pocket watch he commissioned was manufactured in London in 1880 reflecting the concept; this timepiece was most likely the world’s first worldtimer as it simultaneously displayed Fleming’s 24 hypothetical zones on a single dial.

A variation of Fleming’s idea was finally accepted by the International Meridian Conference in 1884 and officially adapted on January 1, 1885, though – common in theory versus practice – the world’s time zones were, and continue to be, defined according to some political compromise. Only in 1929 had all major countries in the world accepted the use of time zones.

Following the official adaptation, multiple time zone watches arrived. They were often outfitted with six or more subsidiary time dials, each labeled for a major city and its representative time zone.

World time watches like Fleming’s own displaying all 24 time zones on a single dial were less frequently manufactured. They were characterized by a small central indicator that rotated counterclockwise once every 24 hours within a fixed time zone ring and provided an approximate reading of hours and even quarters in any of the 24 time zones.

Louis Cottier (1894-1966) from the Geneva suburb Carouge invented and produced the first wristwatch displaying world time controlled by two crowns. That was in 1950, the same year he presented it to Patek Philippe, who subsequently patented it. It received Swiss patent number 340191 in 1959.

Cottier and Patek Philippe’s patent boasted several highly practical elements: precision in choosing the reference city; protection from shock and wear thanks to the protective crystal covering the rotating reference city ring on the dial; and the fact that said ring could be printed rather than engraved, resulting in much better legibility over its forerunners.

Additionally, the entire ensemble was powered by one single movement. To that point, world time systems had generally relied on the use of two movements, which made synchronization an issue. By the time Cottier passed away in 1966, he had made a total of 455 world time movements, manufactured at an average rate of 13 pieces annually.

Justifiably, Patek Philippe continues to venerate Cottier to this day – and it stands to reason that Andersen, who spent nine years in Patek Philippe’s complication workshop early in his career, would do the same. During his time there, he often worked on watches containing the world time complication invented by Cottier. 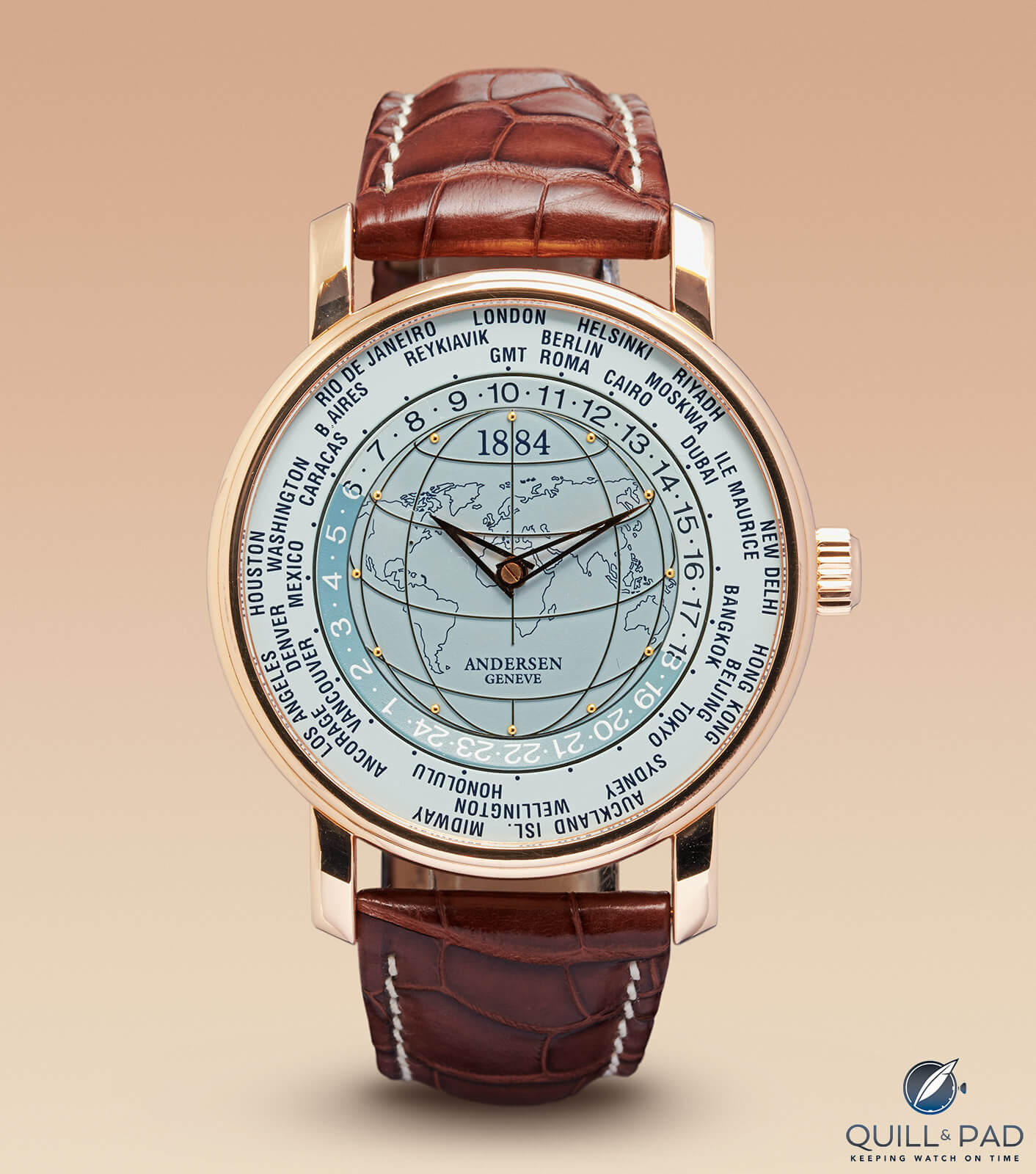 Andersen is without doubt best known for his calendar watches, a group that includes the 1884 worldtimer – the model that has now become the Tempus Terrae – based on the patent by Louis Cottier.

The latest edition of the Tempus Terrae worldtimer, like so many of Andersen Genève’s small series, was inspired by a wish from a client, in this case one of Britain’s most storied retailers: Asprey. 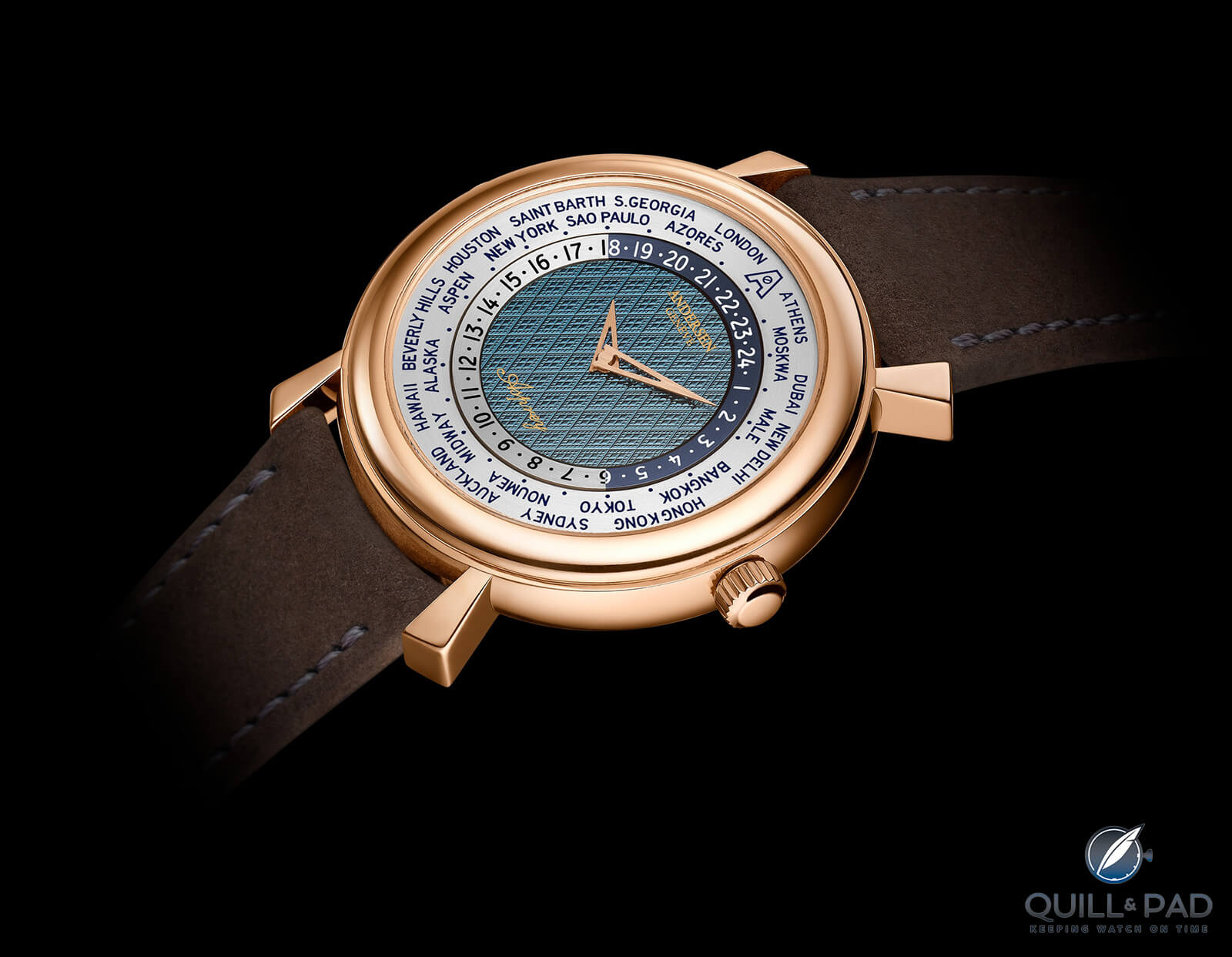 The Andersen Genève x Asprey Heures du Monde is chock full of inspiration from Andersen’s past that sets it apart from other bespoke editions. One of the most important of these are the beautiful triangular lugs that Andersen designed for the case of 1996’s Secular Perpetual Calendar, a design at that time carried out to the watchmaker’s wishes by famed Genevan case maker Jean-Pierre Hagmann. These lugs were also used for 2002’s Orbita Lunae.

Patented by Ludwig Muller in 1988, blue gold is exclusively available in the watch world through Andersen Genève.

Blue gold is a 21-karat alloy of gold, nickel, and iron that turns blue when the metal is tempered at 450-600°C for about ten minutes. Tempering – also known as heat-treating or bluing – is a process often used in the watch world for steel parts like screws. But using it on gold was novel at the time – and remains an exclusivity. 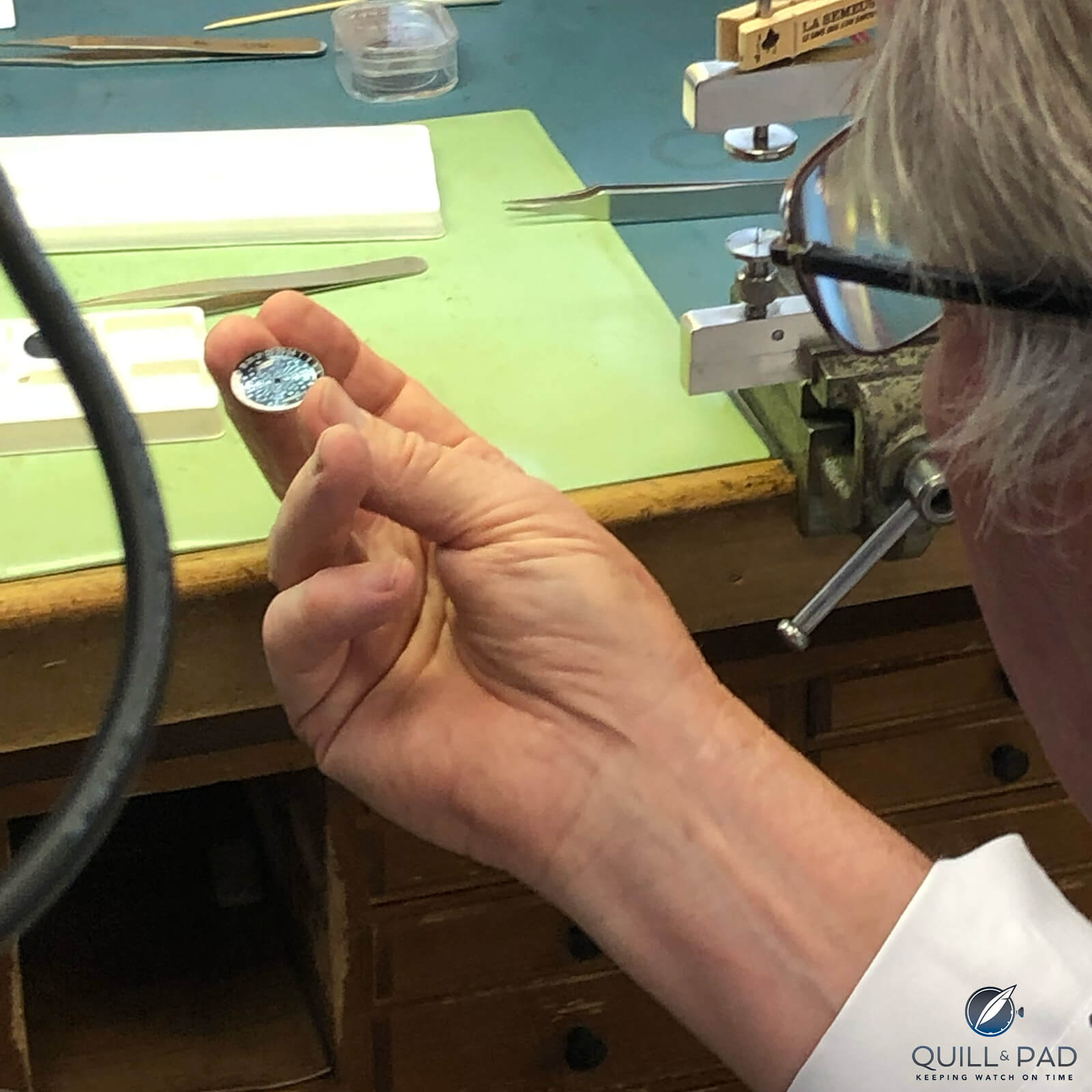 The intensity of the blue increases with the amount of gold in the alloy – so it’s not hard to understand why the 21-karat gold attains this beautiful hue. And no two dials (or other elements) emerge from these processes with quite the same tonality, so in essence each one is unique.

In addition to creating the amazing color, tempering metal this way has the side effect of toughening it by decreasing brittleness and reducing the metal’s internal stresses. Which means that the gold can be worked in gorgeous ways – like the stunning handcrafted guilloche rotor on this watch.

The guilloche pattern on the blue gold dial and rotor was inspired by historical Asprey perfume bottles. Andersen Genève confirms that this pattern has until now never been used on a watch dial.

Another fun detail is also very visible on the dial. All of Andersen Genève’s worldtimer editions have one specific detail in common: on the city ring we find “Moskwa” instead of “Moscow.” Historically, Svend Andersen printed the names of the reference cities in their own languages on his worldtimers. Later, the cities were printed in either French or in English – all except “Moskwa,” which is Russian language for the capital city. This detail remained as Andersen wanted to honor the Russian collectors who were his loyal customers for decades.

And then there are the wonderful “A-shaped” hands created by Andersen – whether that A is for Asprey or Andersen is of course to be decided by the owner. Perhaps one of each?

The back of this watch is a feast for the eyes. This starts with the words “Andersen Genève” and “Asprey” pad-printed in 5N red gold powder on a jet-black jade ring surrounding the impeccably finished movement. 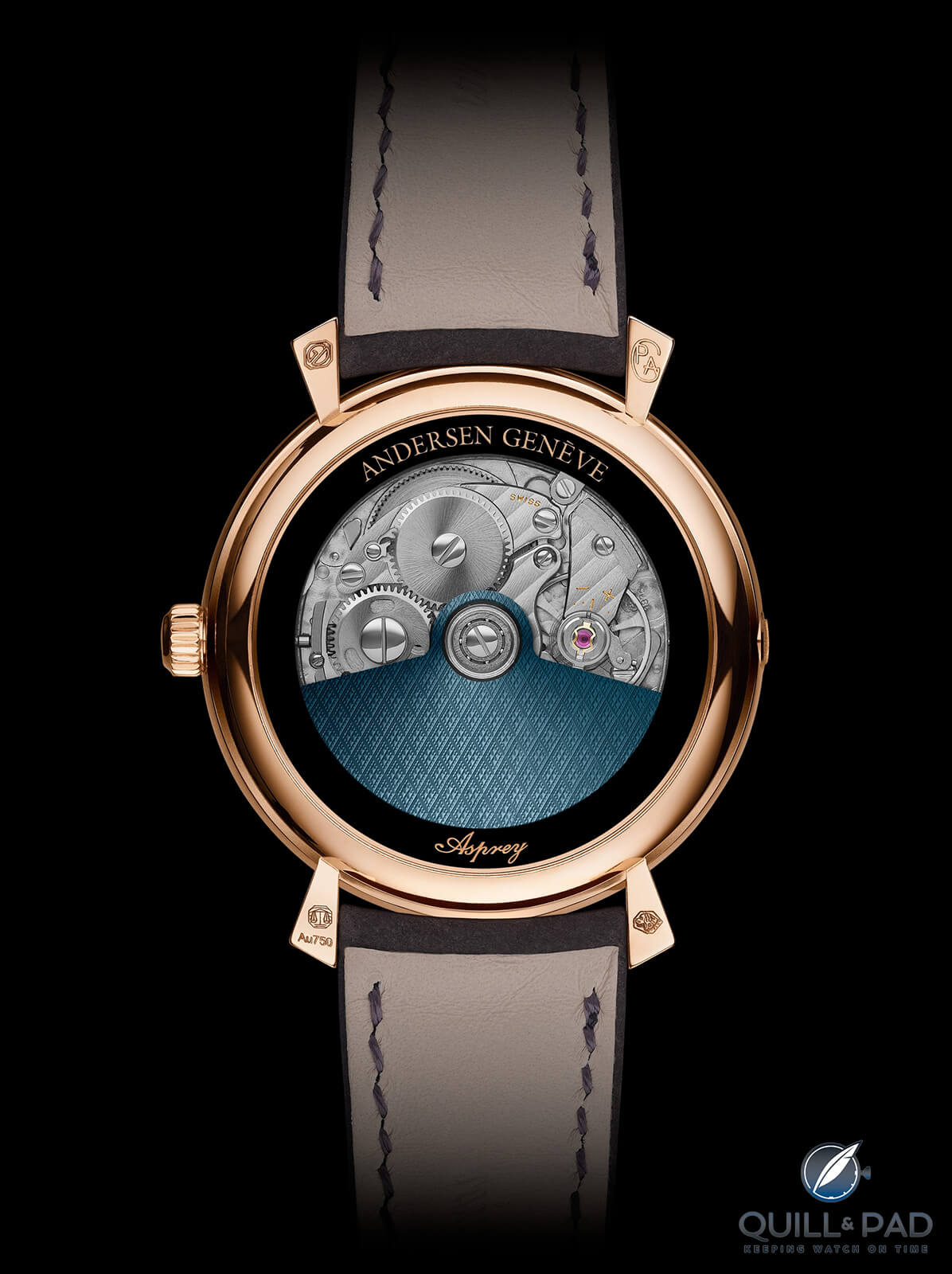 Andersen Genève chose black jade for this ring over, say, onyx because of its superb depth and at times veiny optics. The rare and expensive black jade is, however, a rather fragile material and the ring here is only 0.3 mm in height. Therefore, the reject rate is high: only 33 percent of attempts at pad printing the rings end up usable.

It hardly gets more exclusive than this.

Underneath the Andersen-typical hand-guilloche blue gold rotor, we find an historical AS Caliber 1876, which also merits a bit more of our attention: Andersen Genève’s workshop has reworked most of the movement decoratively as well as having added the proprietary world time module.

The decorative elements include special polishing of the wheels, screws, and even ratchet wheel teeth. Delicate anglage and Geneva stripes (côtes de Genève) add a shiny elegance to the movement.

The ratchet and crown wheels are all hand-chamfered and mirror-polished, while all visible surfaces of the wheels are adorned with snailing and perlage. The wheels of the automatic assembly are rhodium-plated and snail-polished.

Even the 14 visible screws of the original movement were sent to the Andersen Genève spa: first they were touched up on the lathe to rework their shape and then their surfaces were mirror-polished.

This storied retailer in London was founded in 1781. Responsible for introducing Patek Philippe to the United Kingdom, Asprey double-signed watches throughout the 1950s and ’60s from watchmakers as prestigious as Rolex, Jaeger-LeCoultre, and naturally Patek Philippe.

Today, Asprey, one of the most luxurious retailers of jewelry, leather, silver, and luxury goods, often champions independent watchmakers, which goes right along with its “rare, exceptional, and unexpected” motto. Asprey currently holds a Royal Warrant of Appointment from the Prince of Wales for jewelry and silver, which means it is the official supplier to the royal court.

The Worldtime Andersen Genève x Asprey is available only at Asprey in a limited edition of 24 pieces.

A Horological Guide To London

William & Son, London: A Destination For The Unique, The Unusual, And The Fantastic