It’s important to have a clear identity to be successful in the crowded world of watchmaking; perhaps doubly so when attempting to address the microcosmic set of collectors interested in ultra-high-end independent watches.

In my view, every successful independent watchmaker has elements of a “house style” that may attract some buyers and put off others, but nonetheless sets him or her apart. And, at the highest level, this style goes beyond “branding” to become an expression of the personality and artistic vision of the creator. 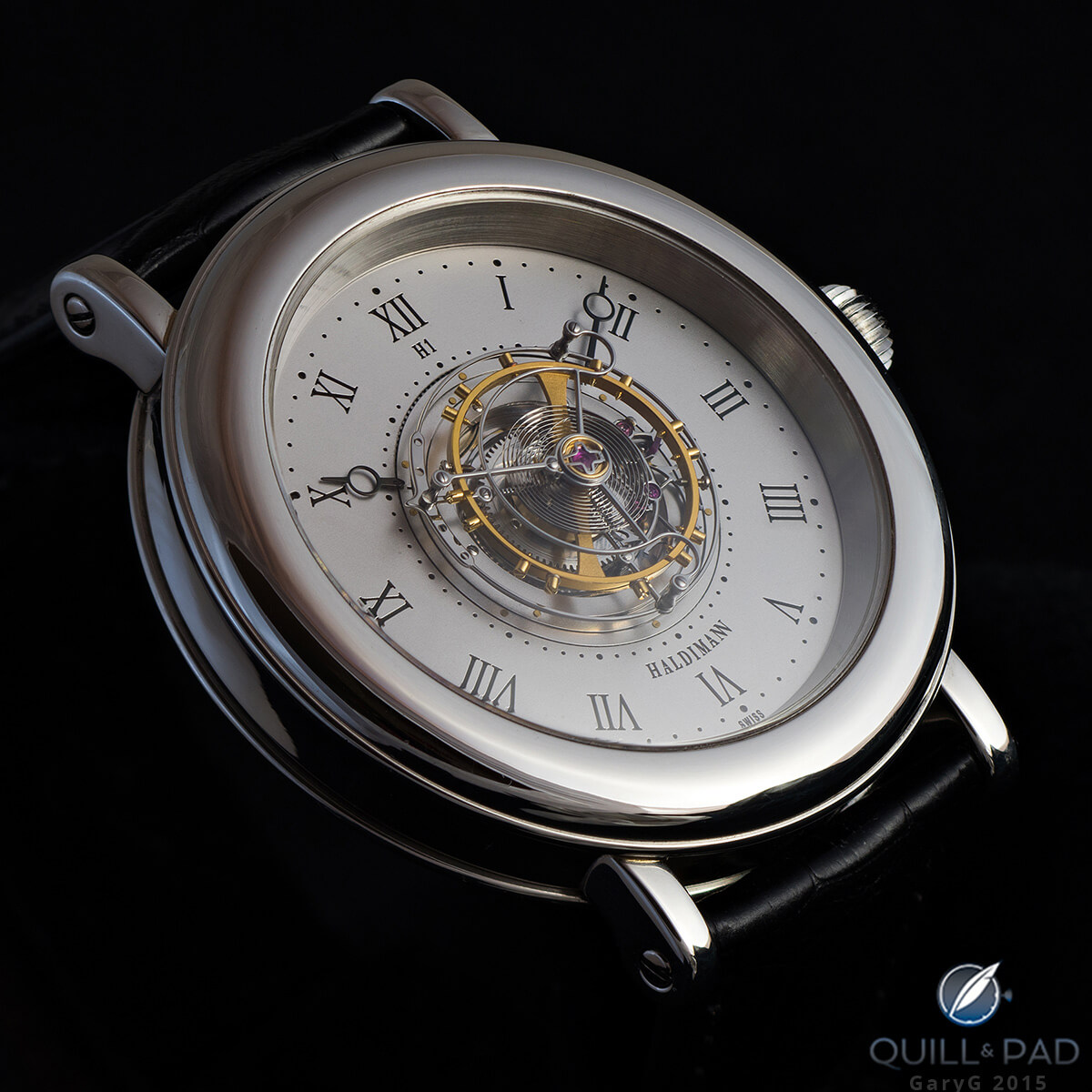 In the picturesque Swiss town of Thun, Beat Haldimann and his small team distinguish themselves by focusing on technical virtuosity of the highest order, as typified by the subject of this installment of Behind the Lens: the Haldimann H1 Flying Central Tourbillon. 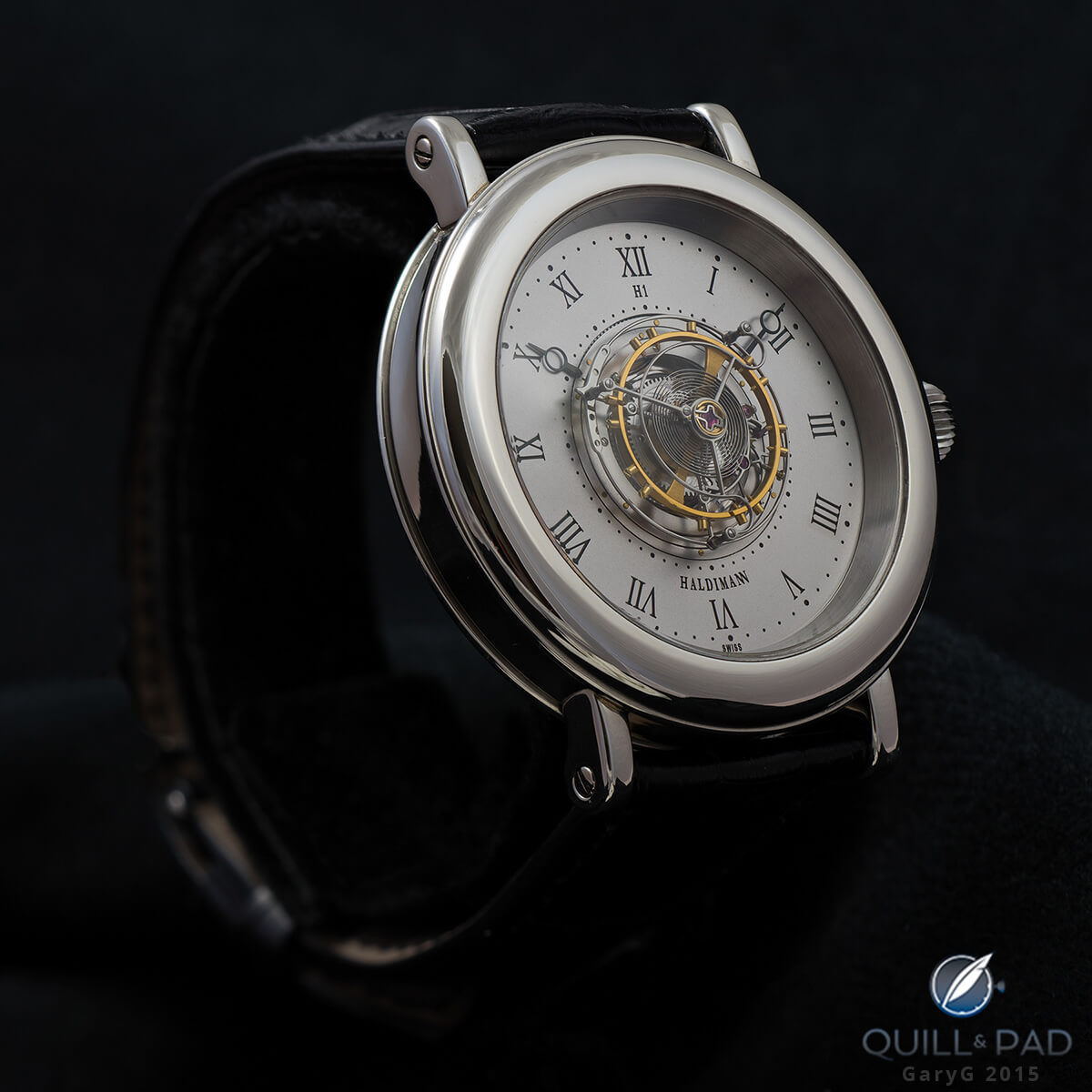 A fuller view of the Haldimann H1 Flying Central Tourbillon

Virtuosity of a particular type

As I researched Haldimann’s work (with special attention to Valentin Blank’s splendid book and the chapter on him in our own Elizabeth Doerr’s Twelve Faces of Time), four very specific themes emerged:

Reductionism: the ideas of removing frills rather than adding them and reducing a concept to its essence. With Haldimann, this idea extends beyond the H1 all the way to radical expressions like the H8, a watch with central tourbillon but no hands to indicate the time. And the H9, with its opaque black front surface that allows no observation of the mechanism at all!

Germanic-style classicism: as evidenced by the full rear plate of the movement and the re-interpretation of the tourbillon developed in the last century by Glashütte maestro Alfred Helwig, who made Breguet’s design into a flying tourbillon. Haldimann has taken major elements of the Helwig design, including the lyre-shaped tourbillon carriage, brought them forward to today, and enhanced them with features including a greatly increased tourbillon size. 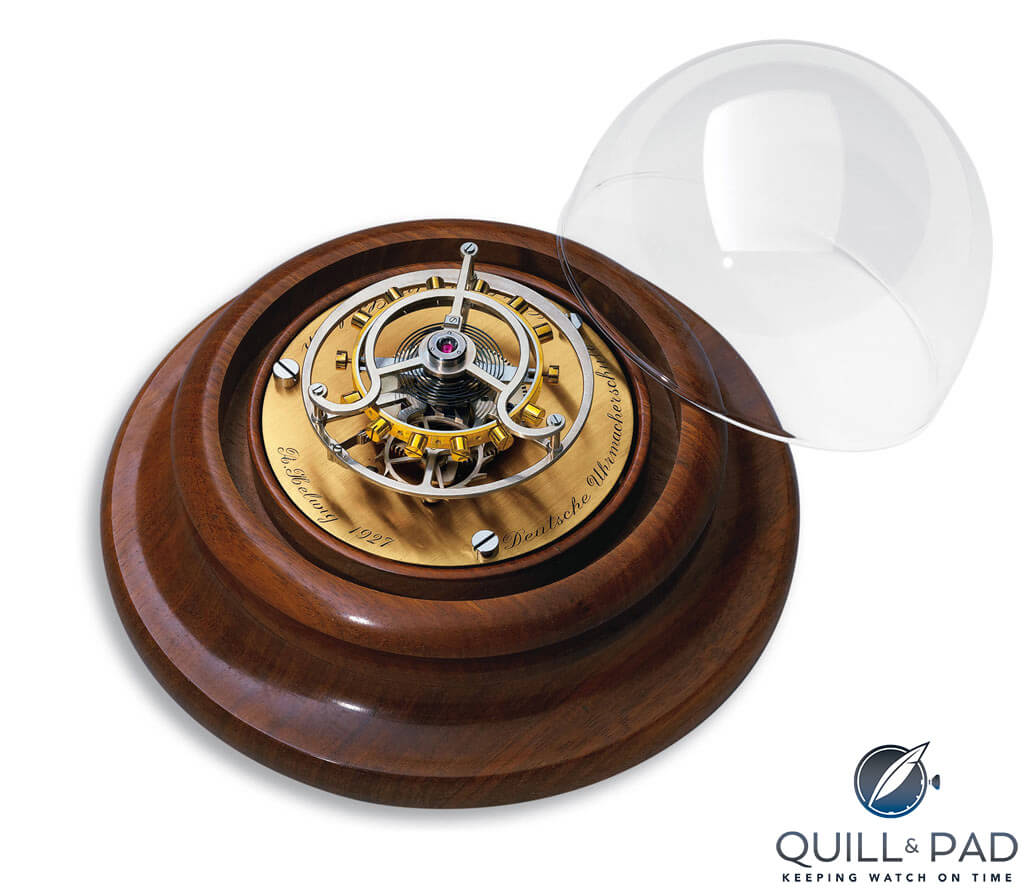 As described in Blank’s book in an essay by watchmaker Volker Vyskocil, Haldimann’s approach also seems influenced by Glashütte legend Moritz Grossmann’s focus on design within constraints: the idea that realizing ambitious technical goals within very tight limits on desired watch dimensions, for instance, makes the resulting product all the more worthy.

I was particularly interested to review a graphic of the original design goals for the H1 compared with the specifications of the realized watch, and see how faithfully the final piece met Haldimann’s original parameters.

Handwork: everything in the Haldimann workshop, including the lacy tourbillon cage shown in the image below, is realized through classic hand methods, with nary a CNC machine in sight. 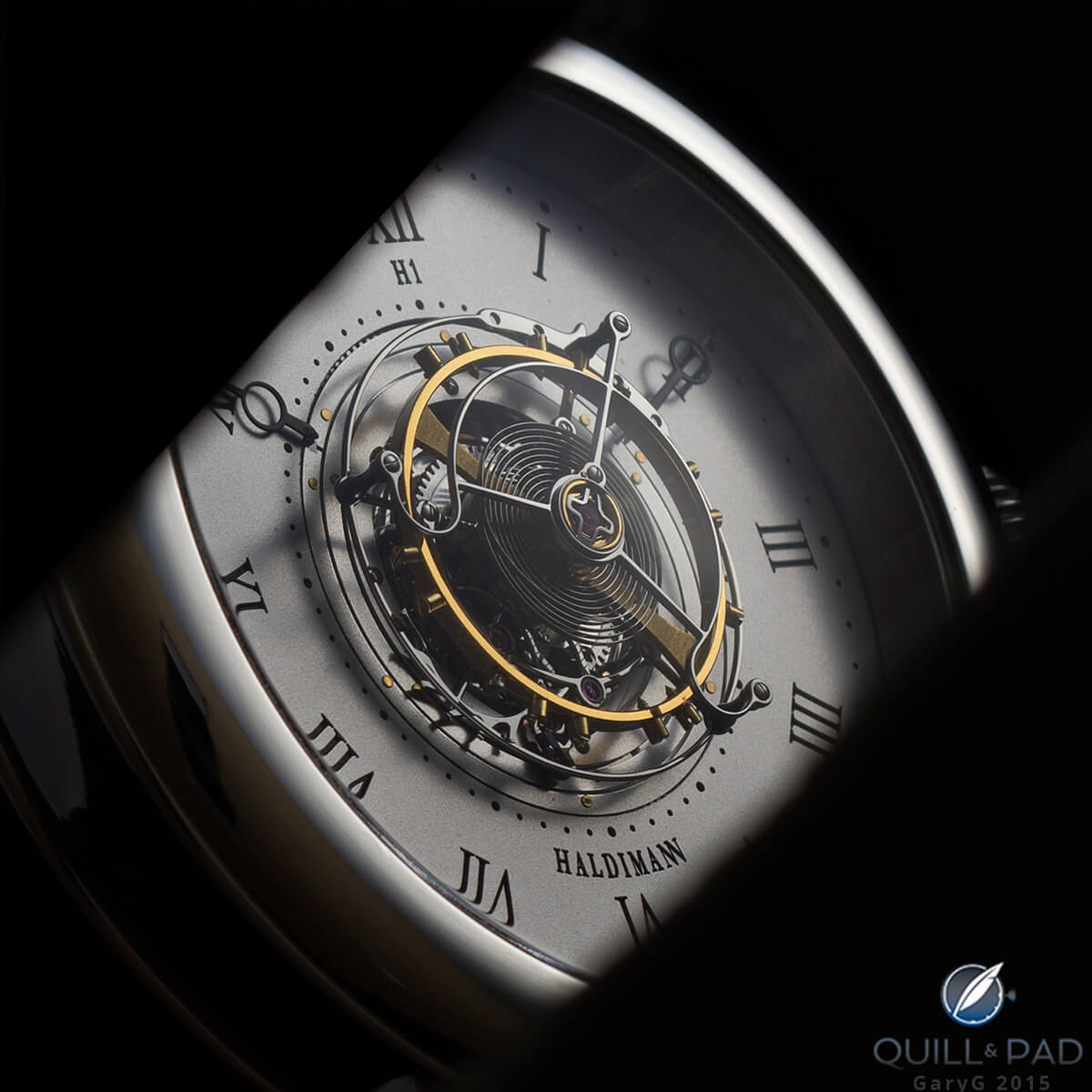 Made by hand: Beat Haldimann’s “singing” tourbillon carriage from the H1

Resonance: the concept of resonance plays a key role in Haldimann’s work. As a clockmaker, he holds a patent on a detached spring impulse escapement that is incorporated in his twin-pendulum H101 clock.

His H2 watch includes not one, but two tourbillons that resonate with each other while revolving about the center of the watch. And in the H1, resonance takes the form of a “singing” tourbillon carriage that resonates with the slow-beat escapement to produce a lovely pocket watch-like ticking.

On to the back 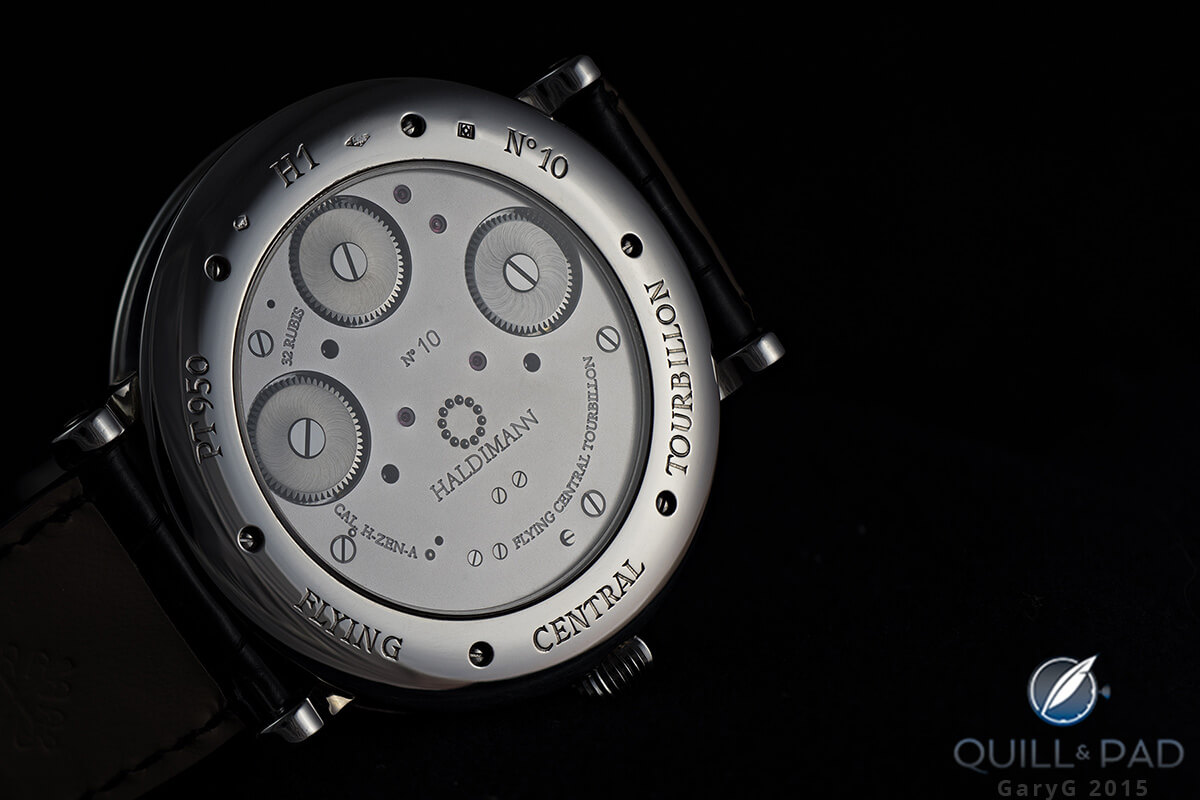 It’s tempting to say that there’s nothing much going on with the reverse of the H1. In fact, on his more recent watches Haldimann has started using solid case backs rather than conforming to the near-universal industry practice of using rear sapphire crystals.

This rear view, however, does give us a clue as to one of the other technical elements of the H1 design: the three spring barrels that power the movement. In the image above, the two horizontally opposed barrels are connected by gear trains to either side of the fourth pinion that rises through the center of the tourbillon, balancing out the lateral forces they carry. The third barrel helps to power the hands.

I’ve long been a fan of the H1, both in its smaller 39 mm diameter embodiment and this more assertive 42 mm size. It was a real pleasure to have the opportunity to photograph this piece from a good friend’s collection. 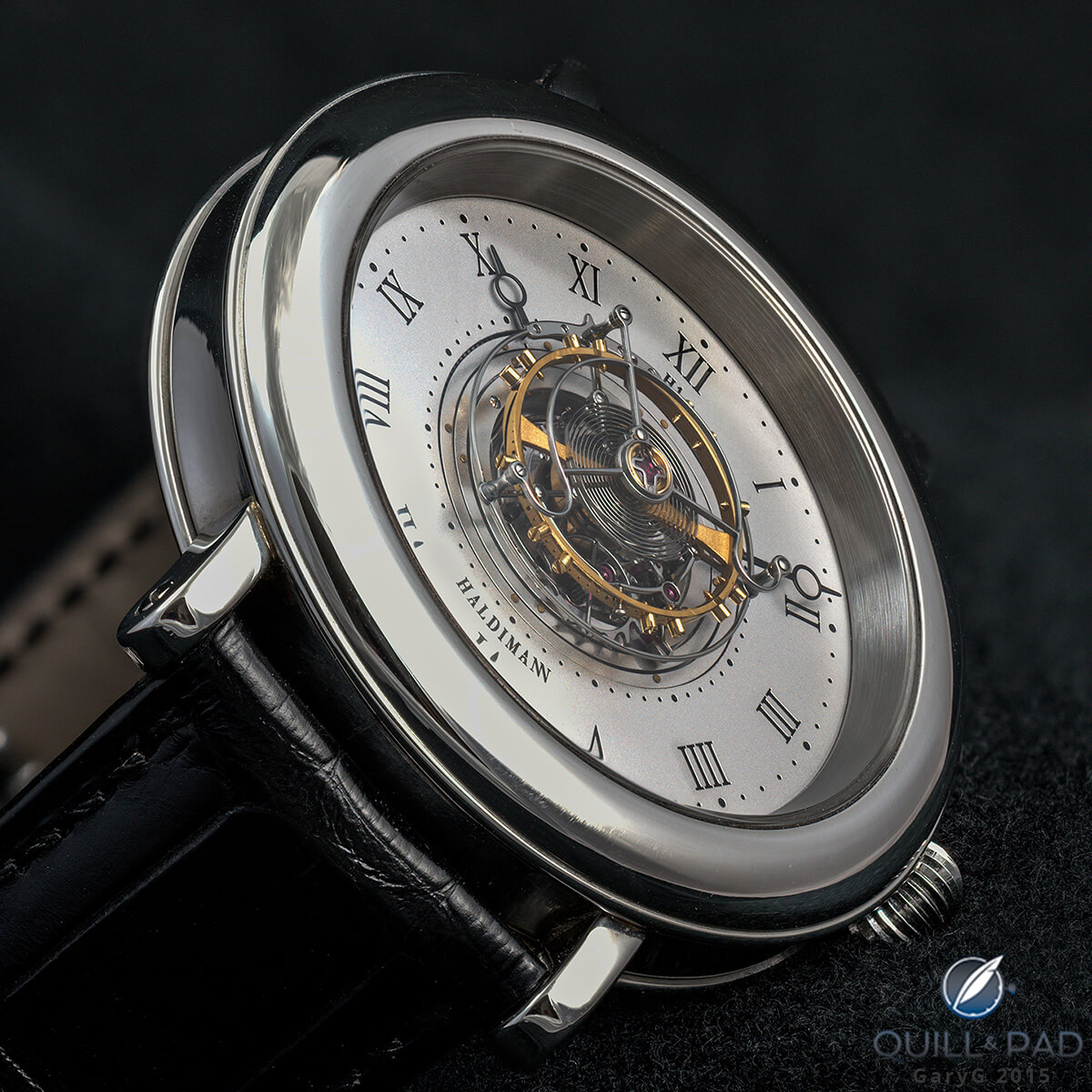 That said, it’s not that easy a watch to photograph! While it does seem that Haldimann uses some sort of anti-reflective coating, the crystal still throws off huge amounts of glare, making careful positioning of lights and use of a polarizing filter pretty much mandatory. The latter, however, presents its own challenges with the introduction of magenta and cyan color casts that can be selectively removed in post-processing, but at the risk of making the resulting image look a bit flat in the desaturation process. 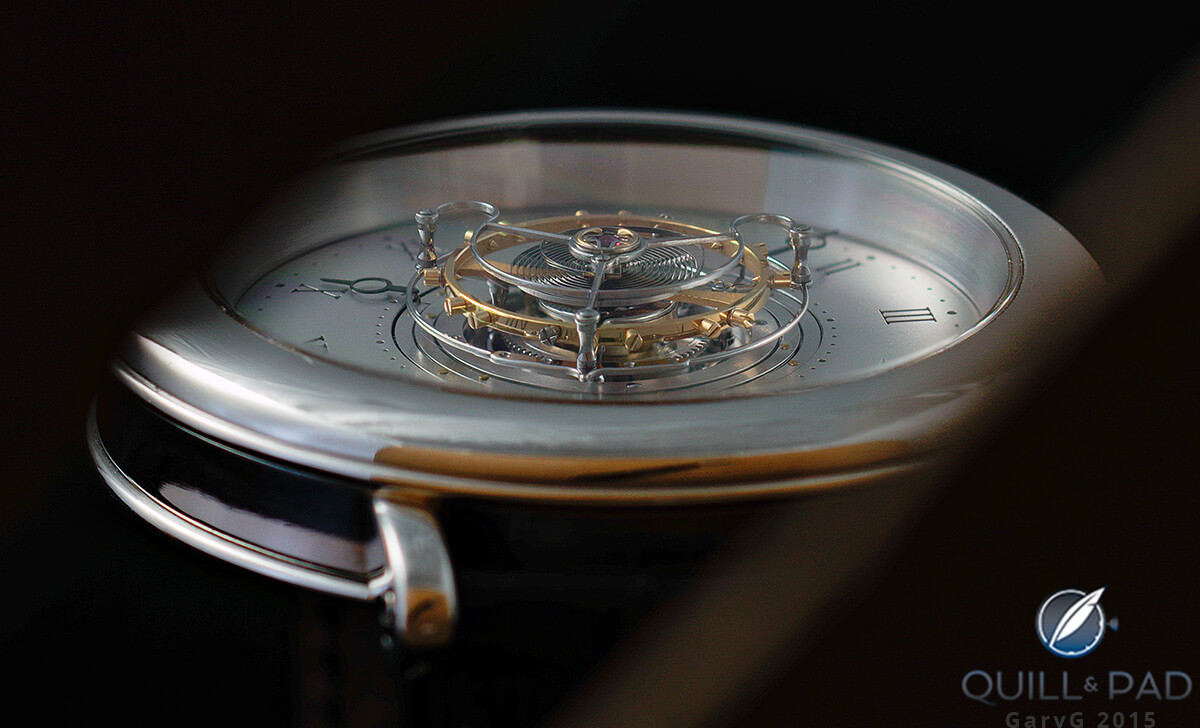 The lowdown: central flying tourbillon of the Haldimann H1

From a shooter’s perspective, this watch pretty much begs for low-angle shots to highlight the stunning central tourbillon assembly. Focus stacking (the software-assisted combination of the in-focus slices of several consecutive images) is the answer to that challenge, but there’s so much going on with all of the springs, screws, and wires in the central tourbillon that the software tends to get confused.

Happily, the shot above worked out pretty well: you can even see the Roman numerals reflected in the bright-polished edge of the balance wheel. 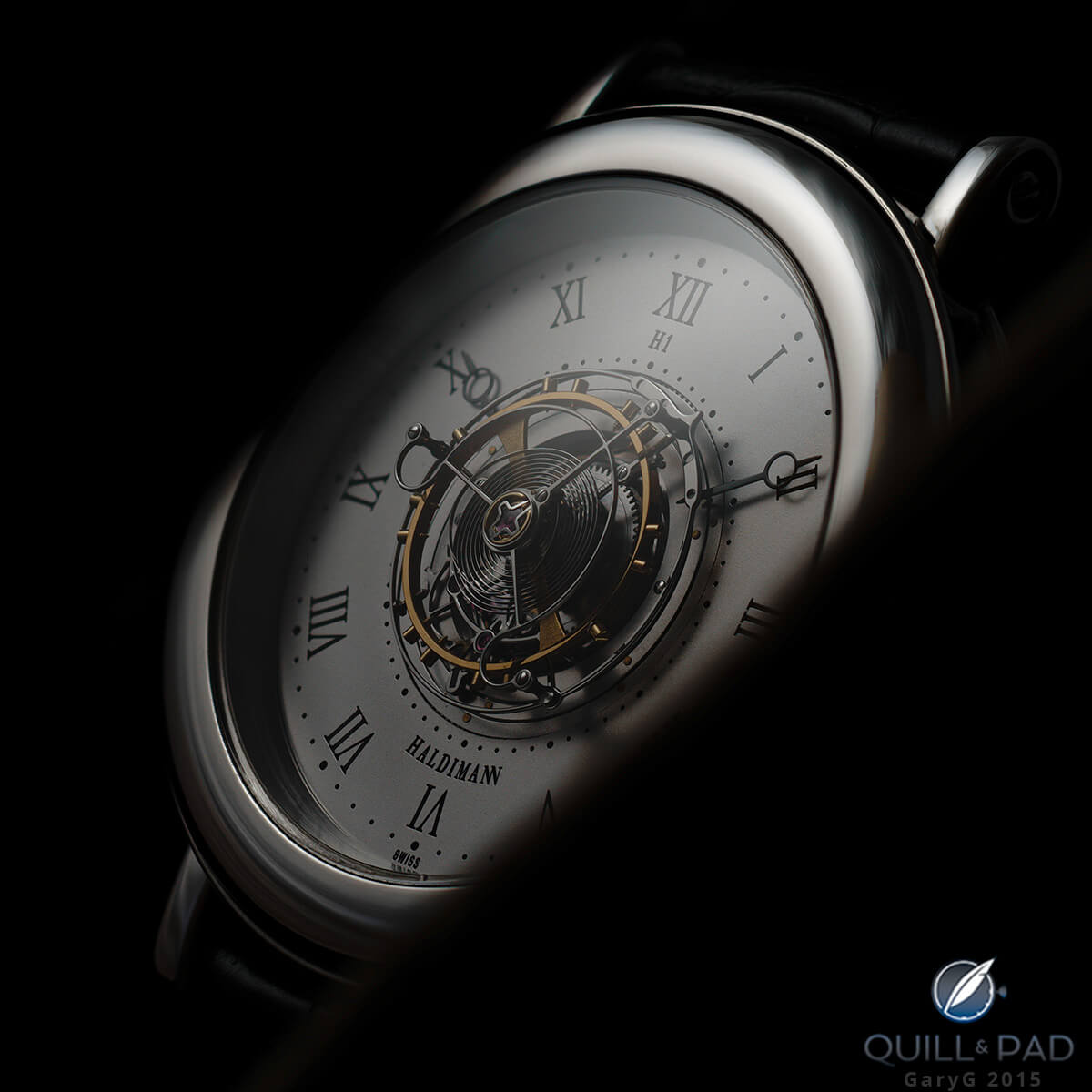 One of the great things about shooting a piece like this one is the string of small surprises that emerge in macro scale. For instance, if you look very carefully in the photo below at the right edge of the small clip that affixes the anti-shock mechanism at the very center of the tourbillon (atop the large ruby) you may spy the very same twelve-dot circle logo that appears above the Haldimann name on the base plate at the rear of the watch. 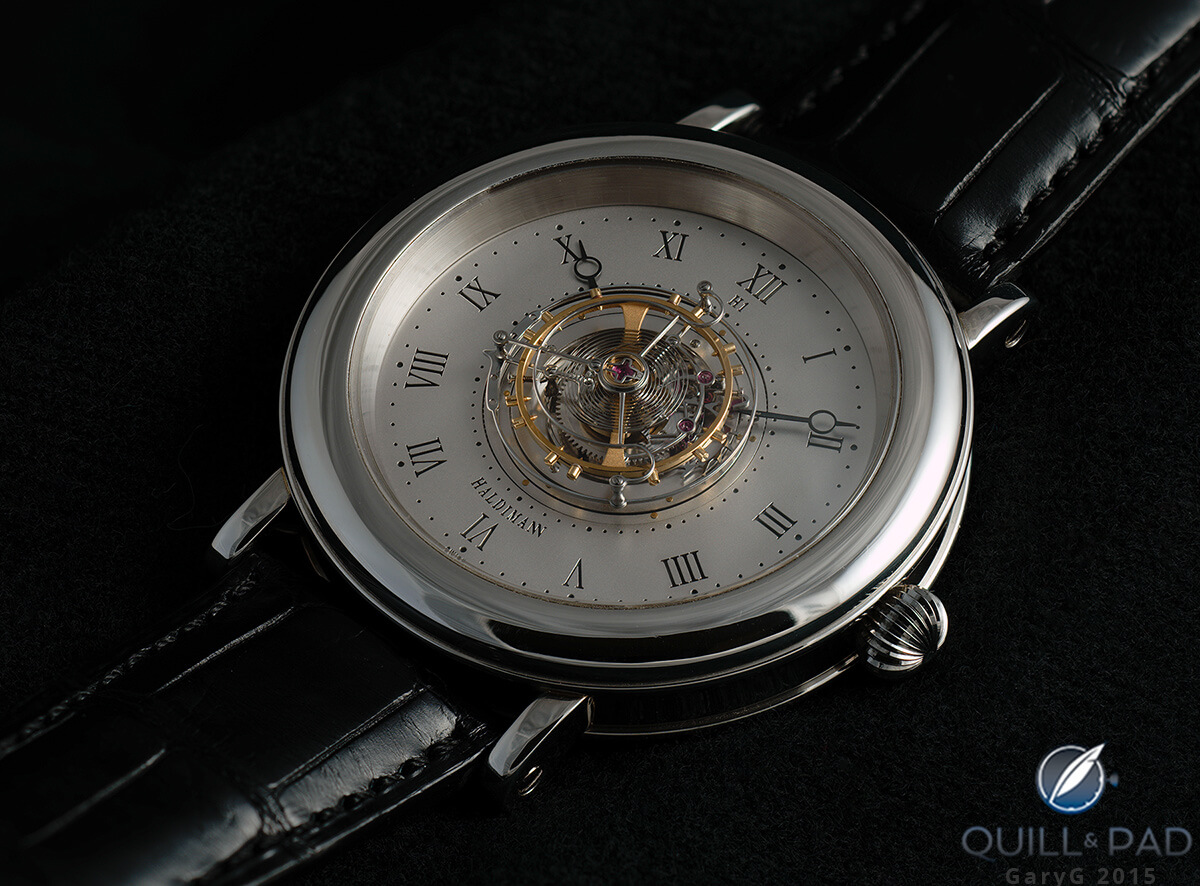 Imagine this on your nightstand: Haldimann H1

Meet the maker, want the watch

The owner of this particular watch had never met Haldimann before this past year; once he did, his ardor for the H1 grew exponentially.

I haven’t had the pleasure yet of meeting Haldimann, but suspect that once I do I may be similarly afflicted. In the meantime, I can say that the watch itself speaks volumes for the brilliant conception and splendid execution that are clear hallmarks of the Haldimann style. 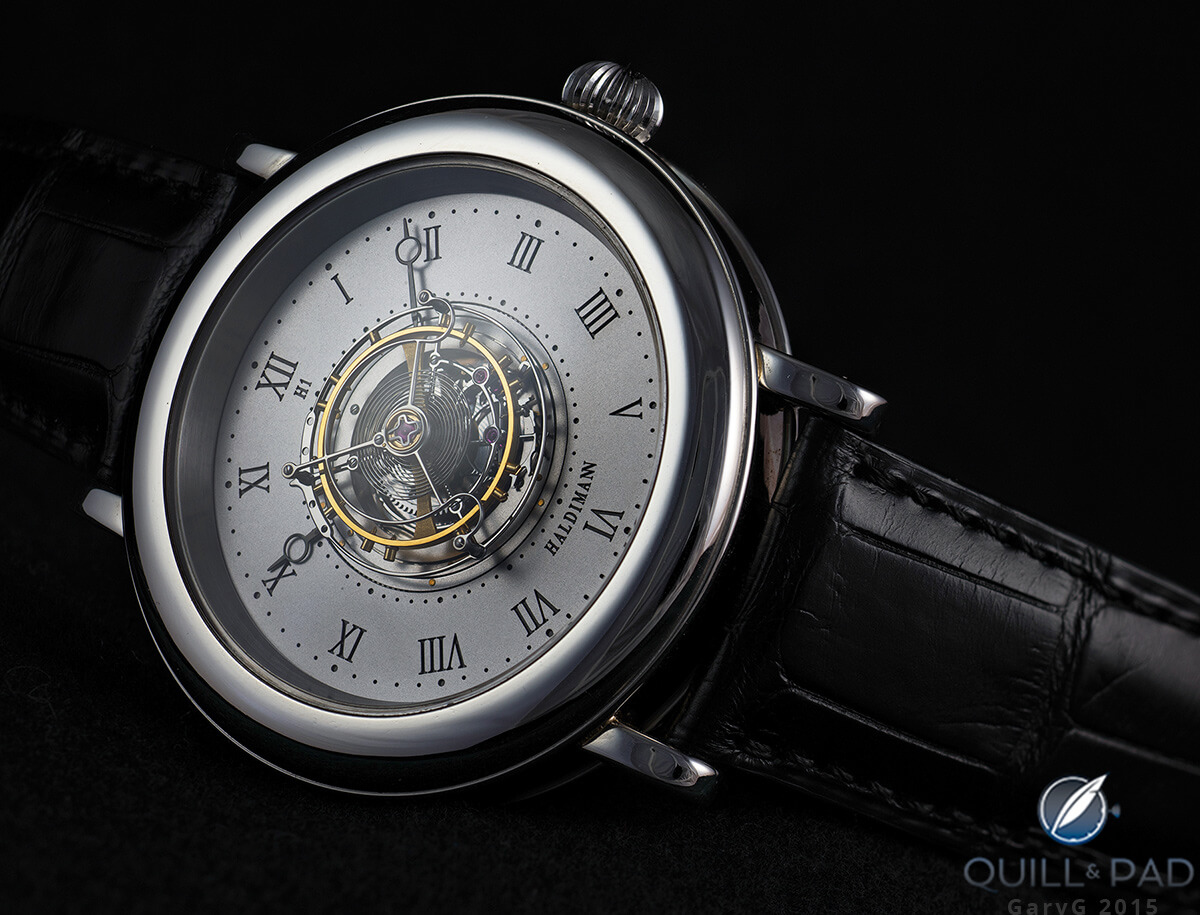 * This article was first published on September 16, 2015 at Behind The Lens: Beat Haldimann’s H1 Flying Central Tourbillon.

Behind The Lens: Vianney Halter Anniversary

What I Learned During Quarantine: Flash Shooting With The Hasselblad X1D II And Godox V1 Flash

Resonance Watches Compared: F.P. Journe vs. Armin Strom vs. Beat Haldimann, And The Pros And Cons Of Each