Behind The Lens: The Ultra-Rare Patek Philippe Reference 5070J-013 – Reprise

One of the great things about watch collecting is that no one can tell you what to buy. If you want a set of every brand of American railroad watch made in 1913, great. If, as in my case, you’d like an ample mix of pieces from independent watchmakers with some special items from major brands and some “fun” pieces for spice, no one can stop you.

There are, of course, some pieces that one might like to have but simply can’t be found – or even if there might be one out there that potentially is for sale, the price is so dear that it’s just too tough on the psyche to sell off other treasured watches to buy it. That’s when it’s good to have friends with both the good taste and good luck to own “unobtanium” pieces like today’s subject, Reference 5070J-013 from Patek Philippe. 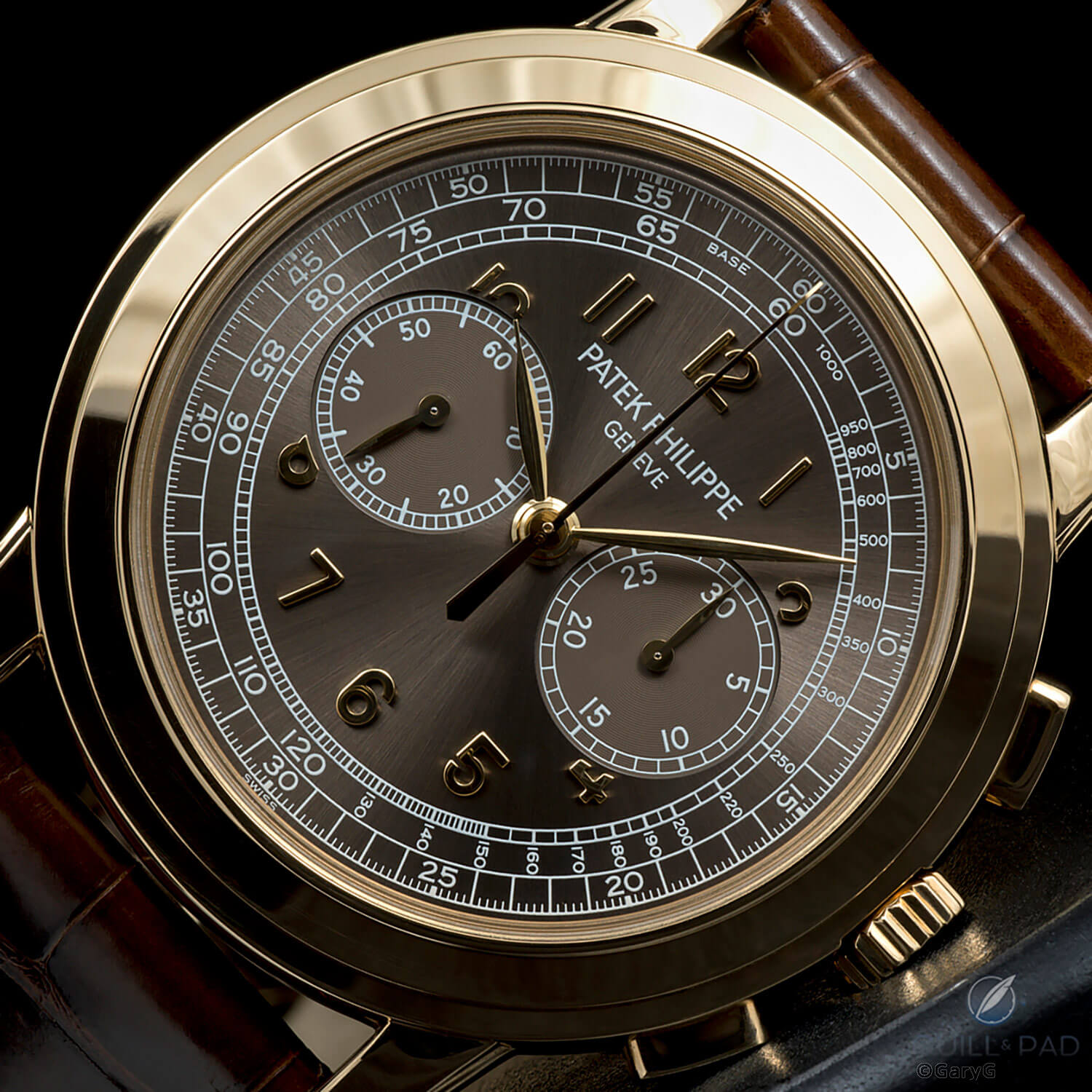 As most folks who follow Patek Philippe are aware, the brand has long been in the habit of making unique watches for special customers, including in recent times entertainment luminaries such as Eric Clapton and Michael Ovitz, items from whose collections of special Patek Philippe models have been fixtures on the auction scene for a little while now. 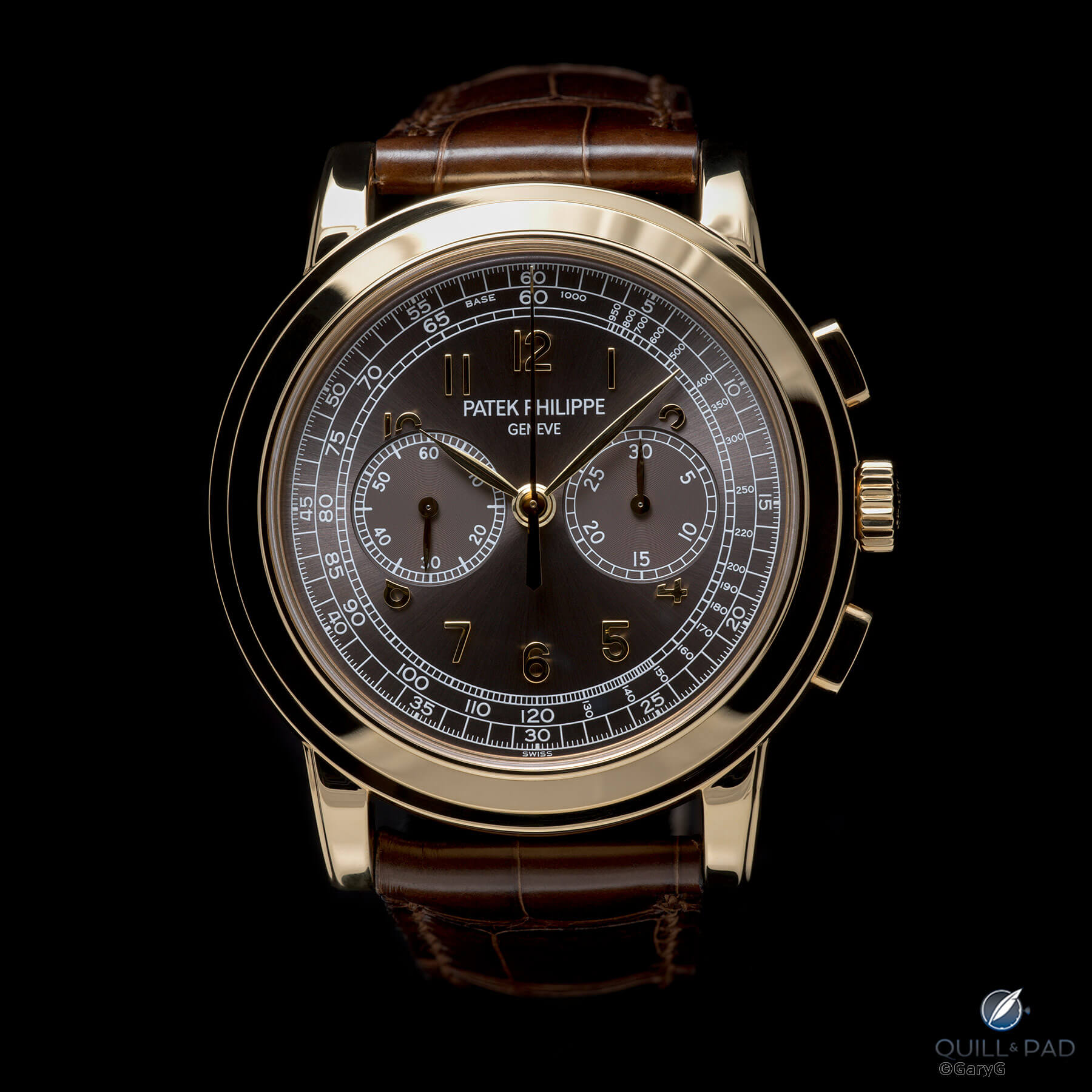 It was not until 2015, however, that Patek Philippe publicly issued a number of small editions of previously discontinued references, each in previously unmade metal/dial combinations – just in time for the landmark Patek Philippe Grand Exhibition at the Saatchi Gallery in London.

Thanks to blogger Patek5070,we have a list of all of the special reference types that were on display, which included a set of “London Special Pieces,” a selection of Rare Handcraft items (largely not for sale), and finally in the “Napoleon Room” the small-lot re-editions as listed below, including four 5070 versions. 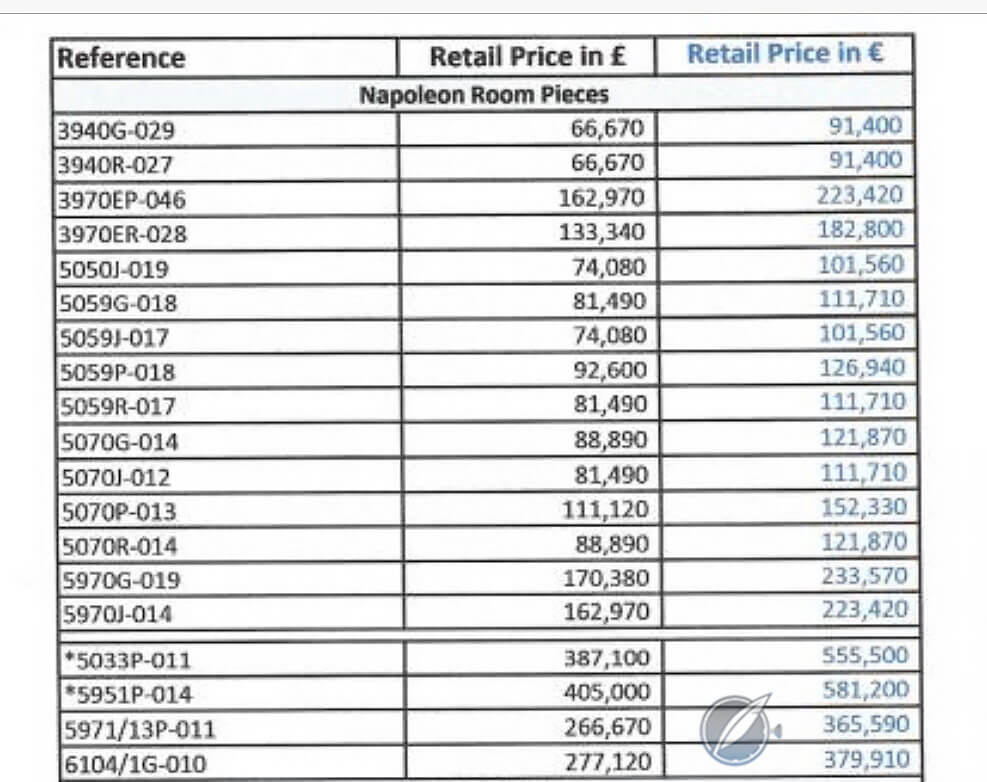 In only five short years, the story behind these “Napoleon Room” watches has become somewhat obscured in the mists of time, and the good folks at Patek Philippe seem happy to allow that to continue. You’ll see lots of claims that each of these watches was created in a set of only five examples and sold as part of the London Grand Exhibition. But we know, for example, that there are many more than five of the salmon-dialed Reference 3940G-029 models out there, some of which were allocated to retailers to sell (and at least two of which were bought, new in sealed boxes, at the Patek Philippe Geneva Salon by close friends of mine in the past couple of years). 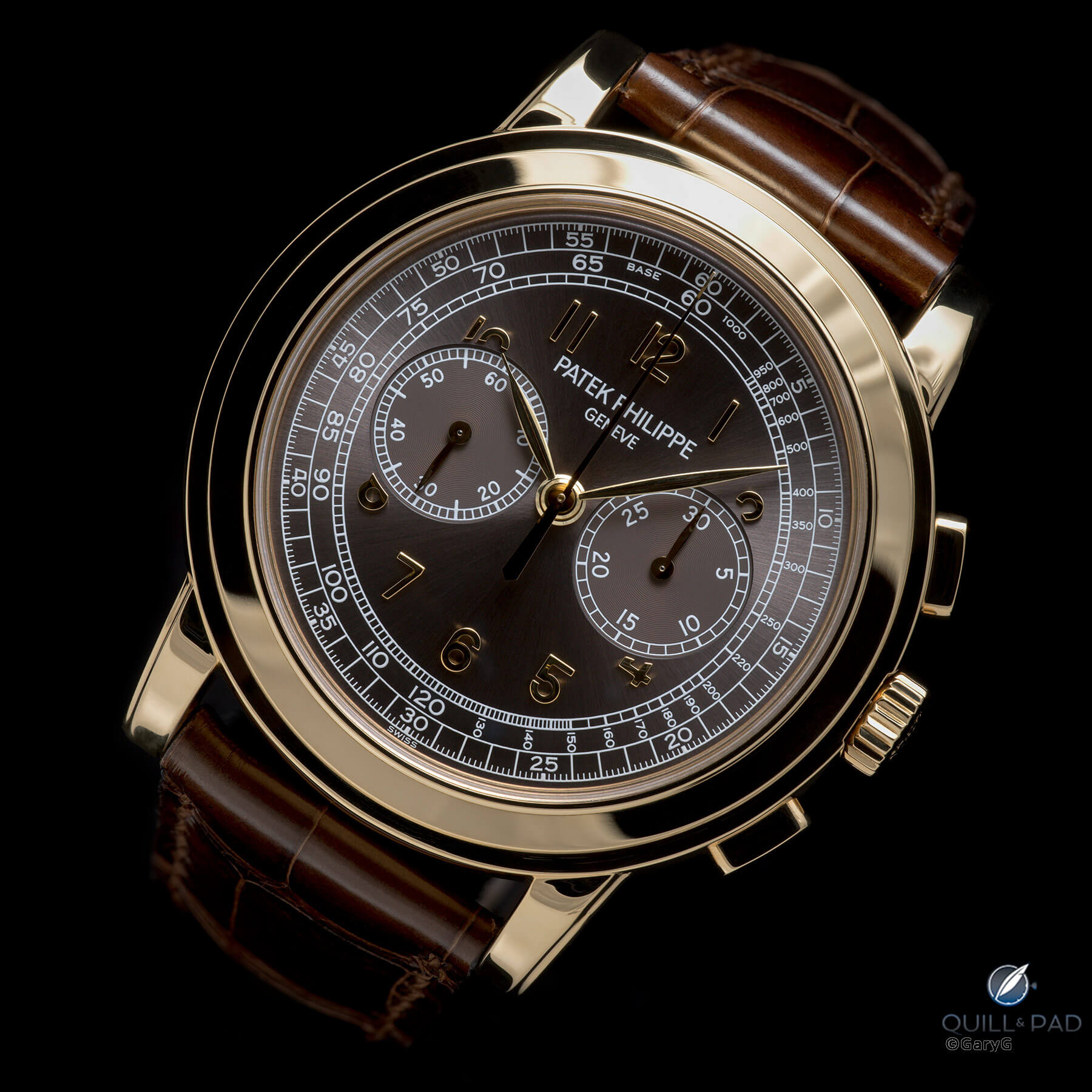 I’ve also seen with my own eyes in the past few years brand-new examples of some of the Napoleon Room references for sale through authorized Patek Philippe retailers, and so as far as I know it’s not possible to say how many of each reference were made and when – and where they were sold; in fact, with some perhaps having been available even prior to the London Grand Exhibition.

And then there are other Patek Philippe Vintage Collection references made using the same discontinued-watch small-lot model that have emerged since the time of the London Grand Exhibition, including my very own Reference 3940P-027, which appears nowhere on that Napoleon Room list. 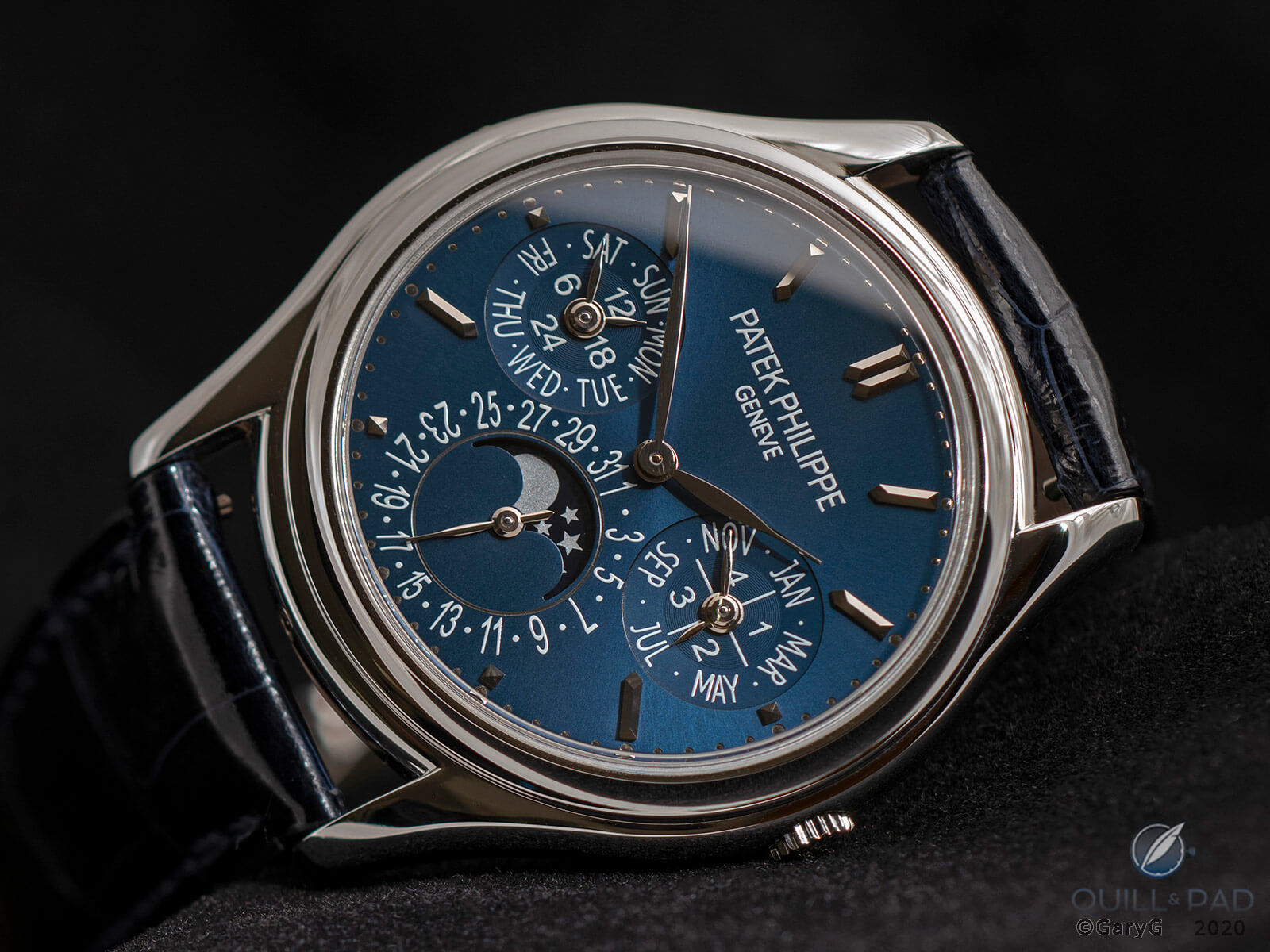 So, for the purposes of clarity, perhaps it’s just best to refer to this 5070J reference as one of the Vintage Collection; but if you prefer Saatchi or London I’m not going to yell at you.

Enough history; how about that watch!

She’s a corker, isn’t she? This is a watch that might just bring yellow gold back into fashion single-handedly, and for me the combination of the yellow case and sunburst-brushed brown dial is as gorgeous as it is unexpected.

While I had my friend’s watch for shooting, I spent a lot of time simply holding it at different angles to the light and watching the bright area sweep around the dial. 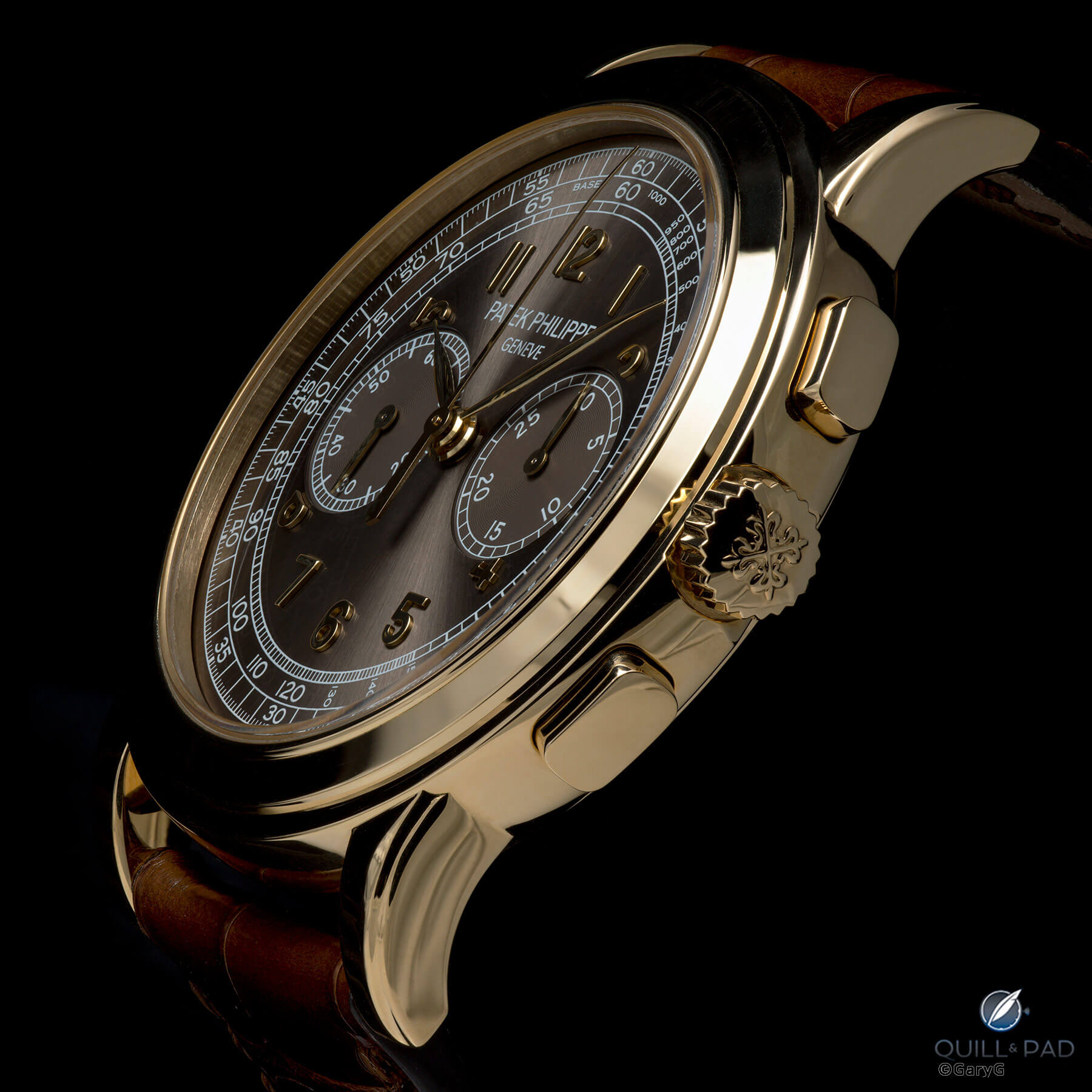 I think that the use of all yellow gold for the hands and indices was also an inspired choice; while legibility suffers just a tiny bit in some light conditions, you can always turn your wrist for a clearer view and the yellow-on-brown look is really harmonious in my view, with the use of white for the printed indications giving a bit of welcome visual kick. 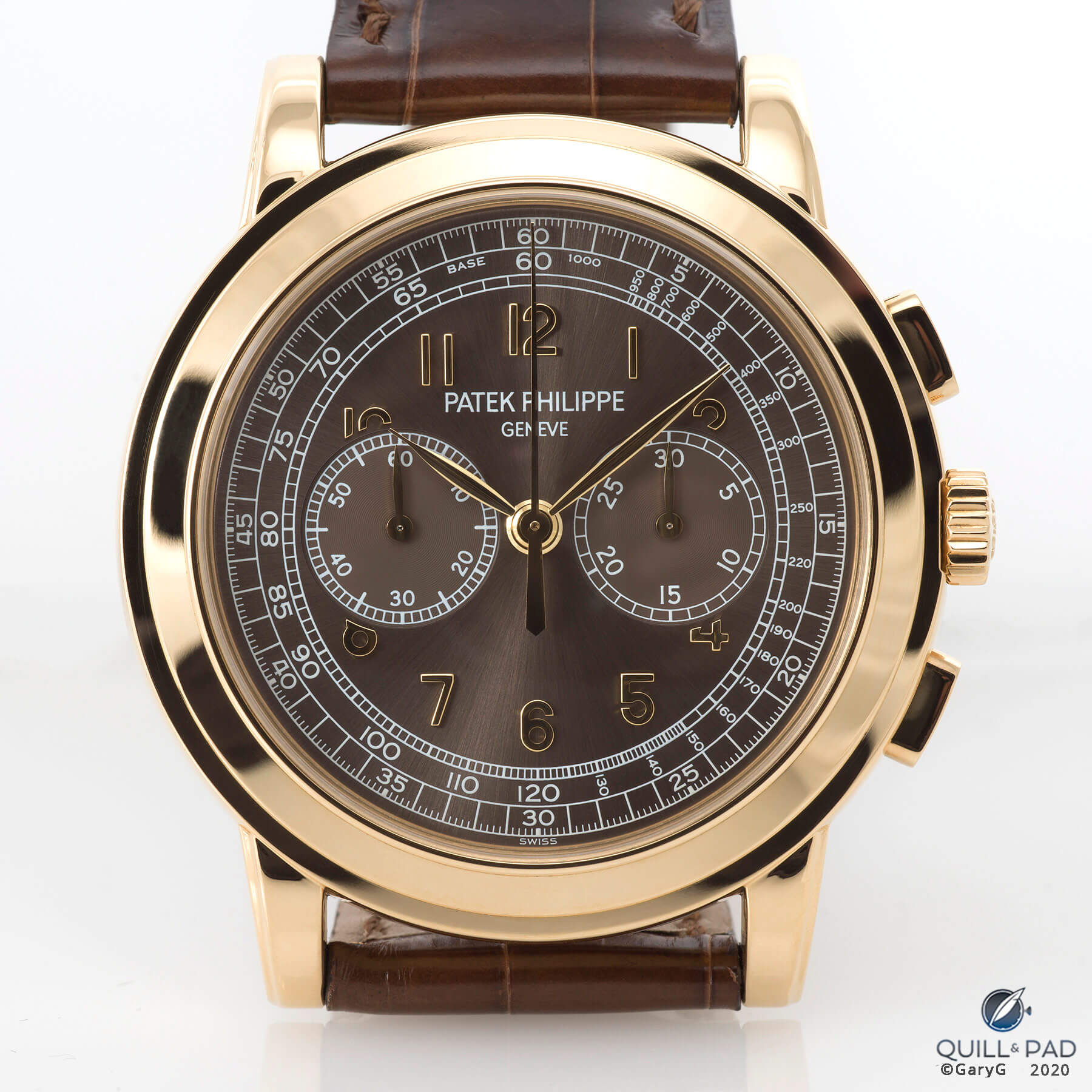 Yellow on brown on yellow, with a touch of white: Patek Philippe 5070J Vintage Collection

Closer inspection of the dial reveals that this J version shares the updated visual cues of the other London/Vintage Collection 5070 variants when compared to the standard-production 5070, including a different font for the brand logo, smaller numerals on the running seconds subdial, and differently shaped printed numerals for 1, 7, and some of the 4s. 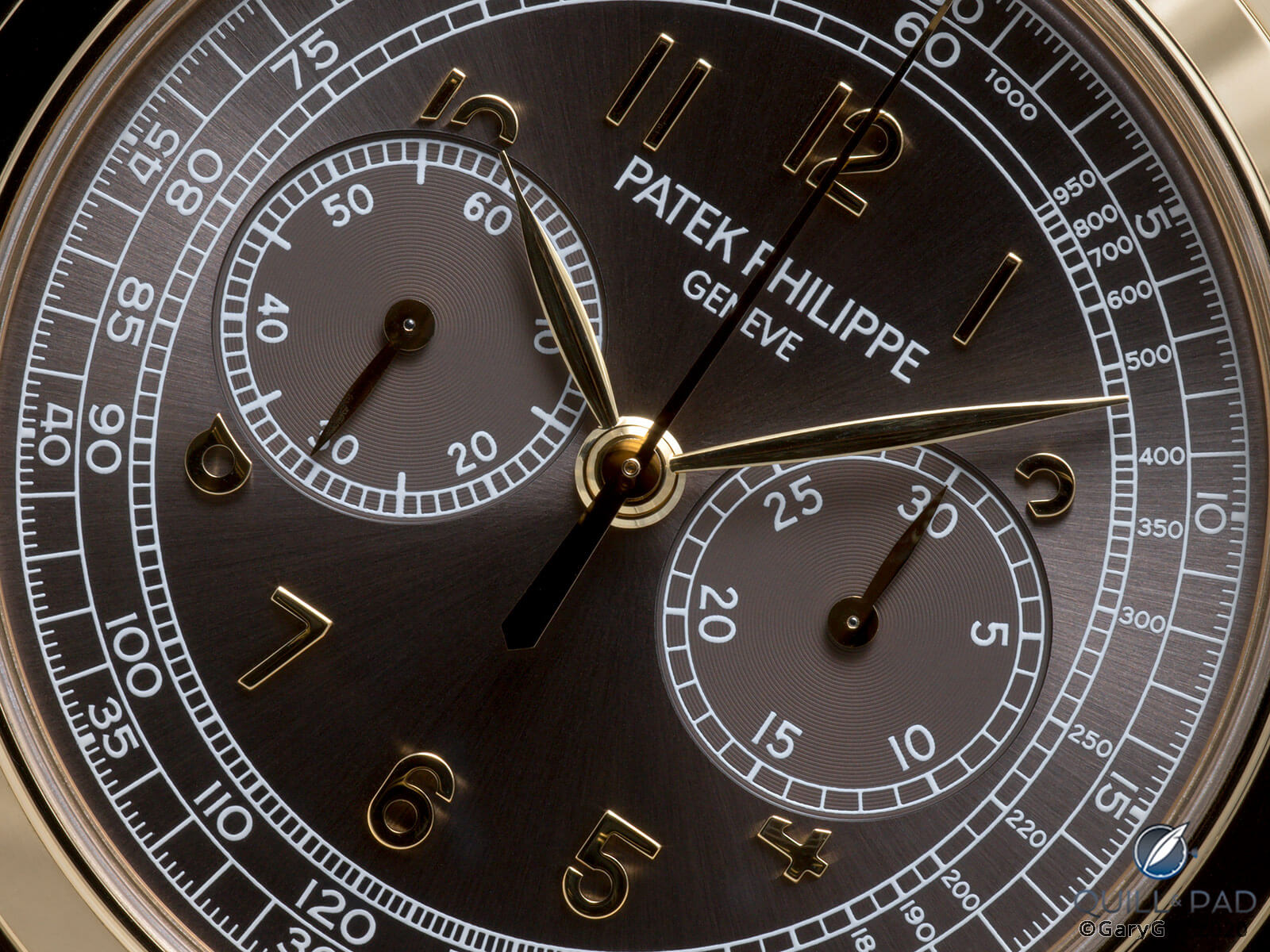 On the back side, we’re greeted by the lovely Lémania-based Caliber CH 27-70 movement with its Geneva Seal. Unlike the newer in-house Patek Philippe chronograph movement, we see some interior angles on the 27-70, and I’ll confess that I’m quite taken with the radial brushing on the traditional Patek column-wheel cap. 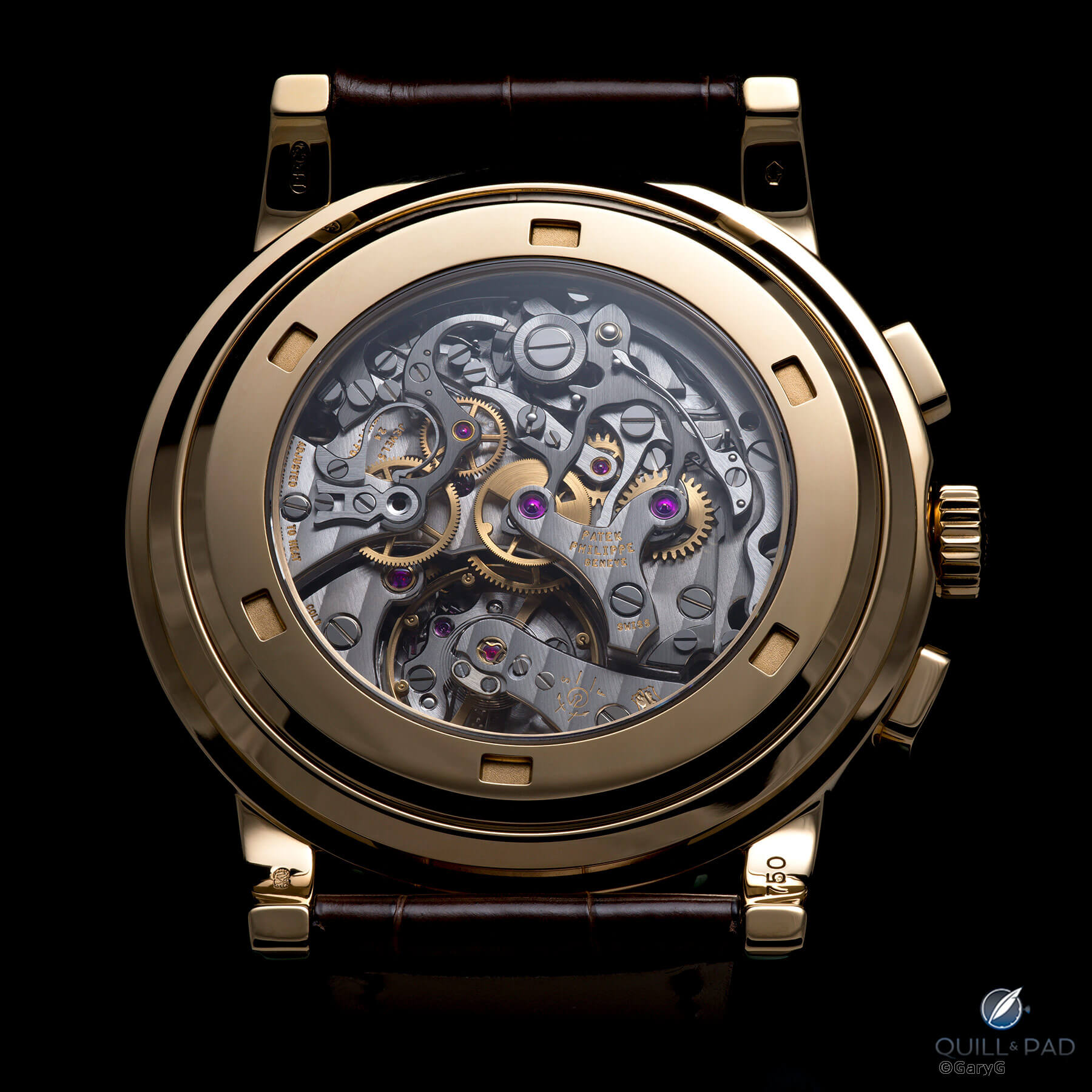 While the wide rear bezel gives a hint that the movement is perhaps a bit small in diameter for the assertive 507x family case, overall I like what I see on the rear of the watch – and with its somewhat busy dial design, Patek Philippe has managed to use a movement of this size without making the dial-side display look cross-eyed as a result. 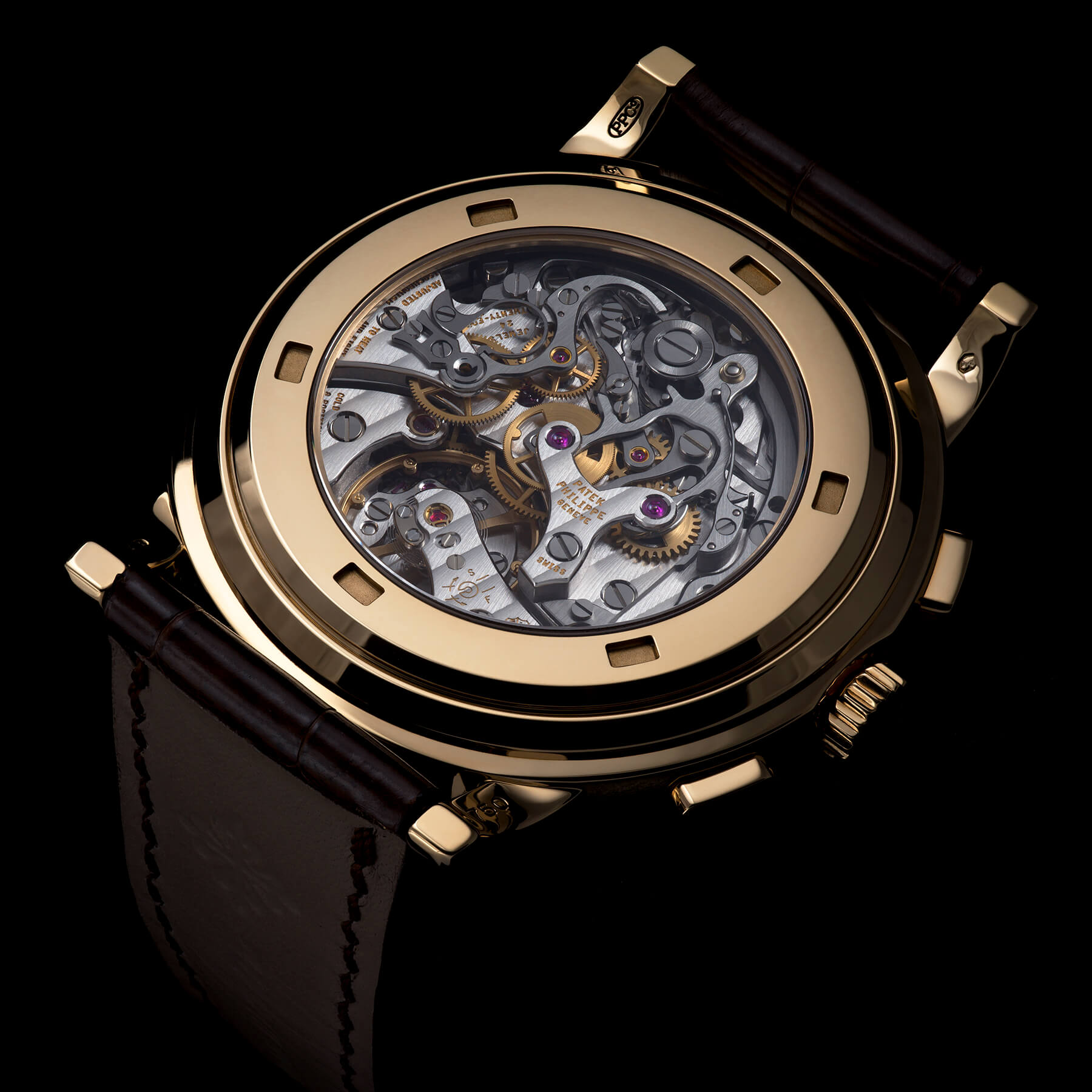 For comparison purposes, I set up some shots of the 5070J next to my Reference 5170P. Both have their significant merits, but as you can see, the size and framing of the 5170’s Caliber CH 29-535 PS place it much more front and center than the slightly withdrawn position of the CH 27-70. 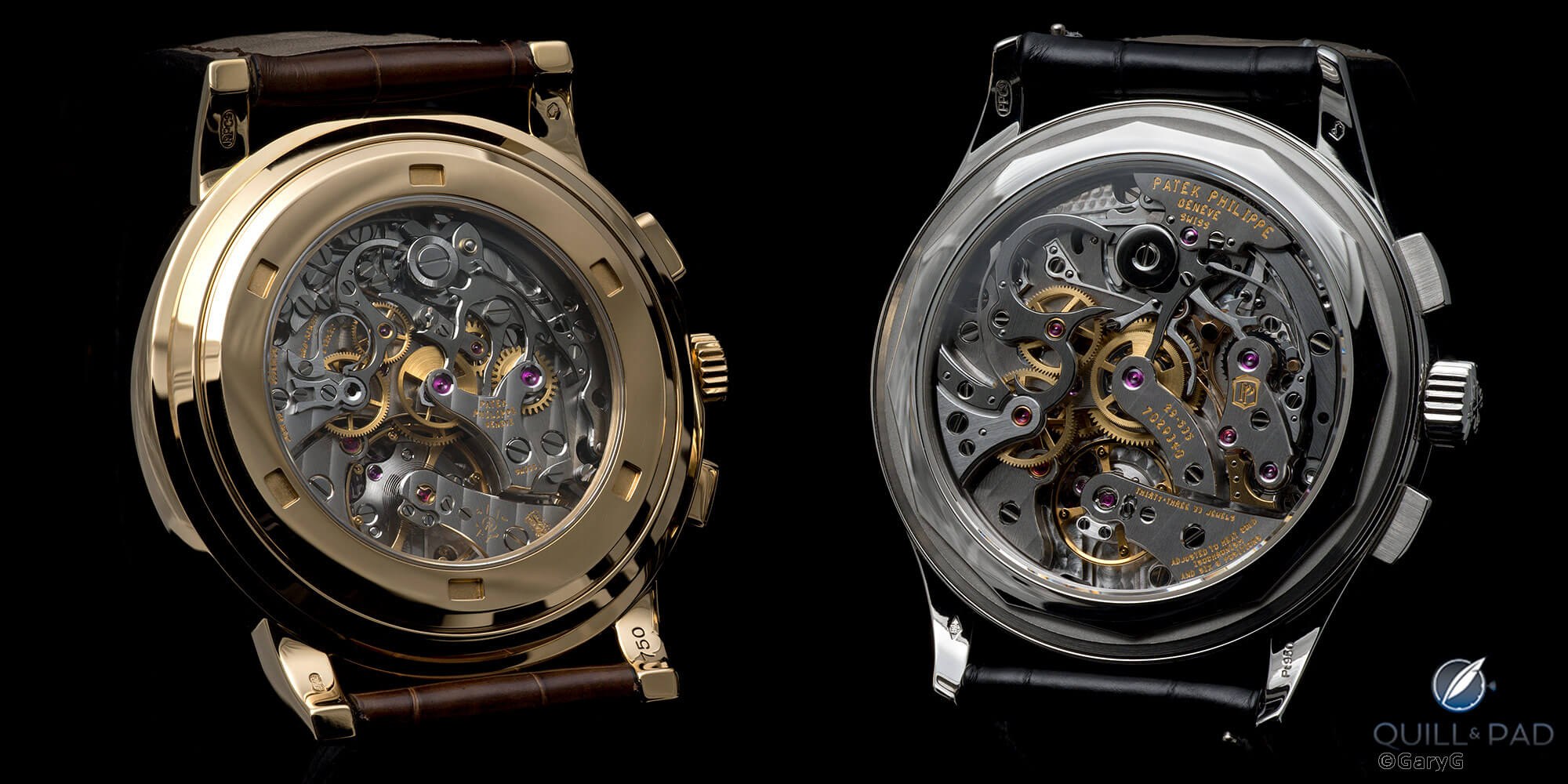 Side by side: movement views, Patek Philippe Reference 5070J (left) vs. Reference 5170P

While I was at it, I pulled out my own yellow gold Patek Philippe, the Reference 2526 “Gobbi Milano,” for a comparison shot. It might be the brown dial creating a bit of an illusion, but to my eye the yellow gold of the 5070 almost looks to have a bit of a cinnamon tint. Illusion or not, I think that the 5070 stands up quite well to its notable forebear. 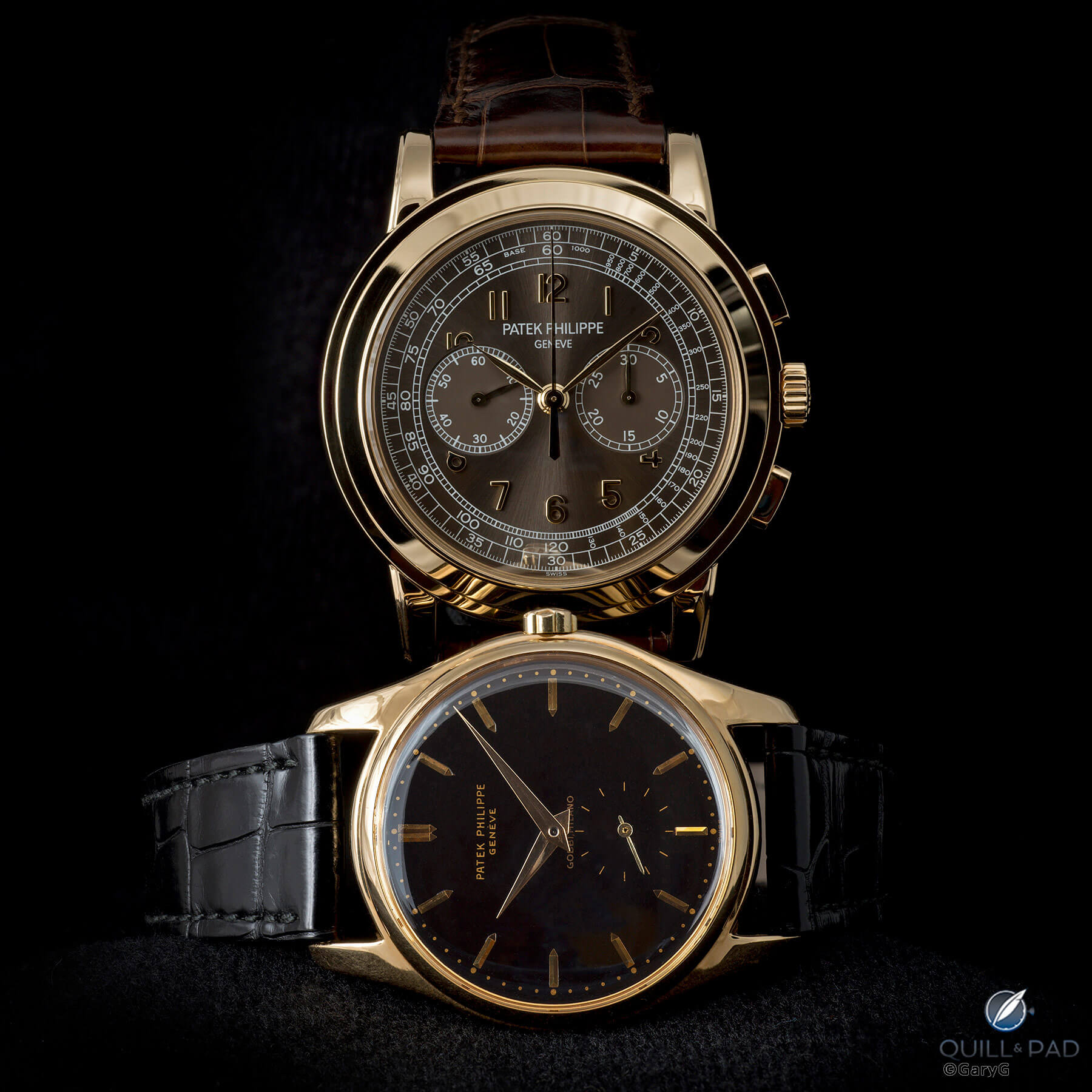 And once all of the light tent work was done, I did sneak the 5070J onto my wrist for a quick walk into the back garden to grab a wristshot. 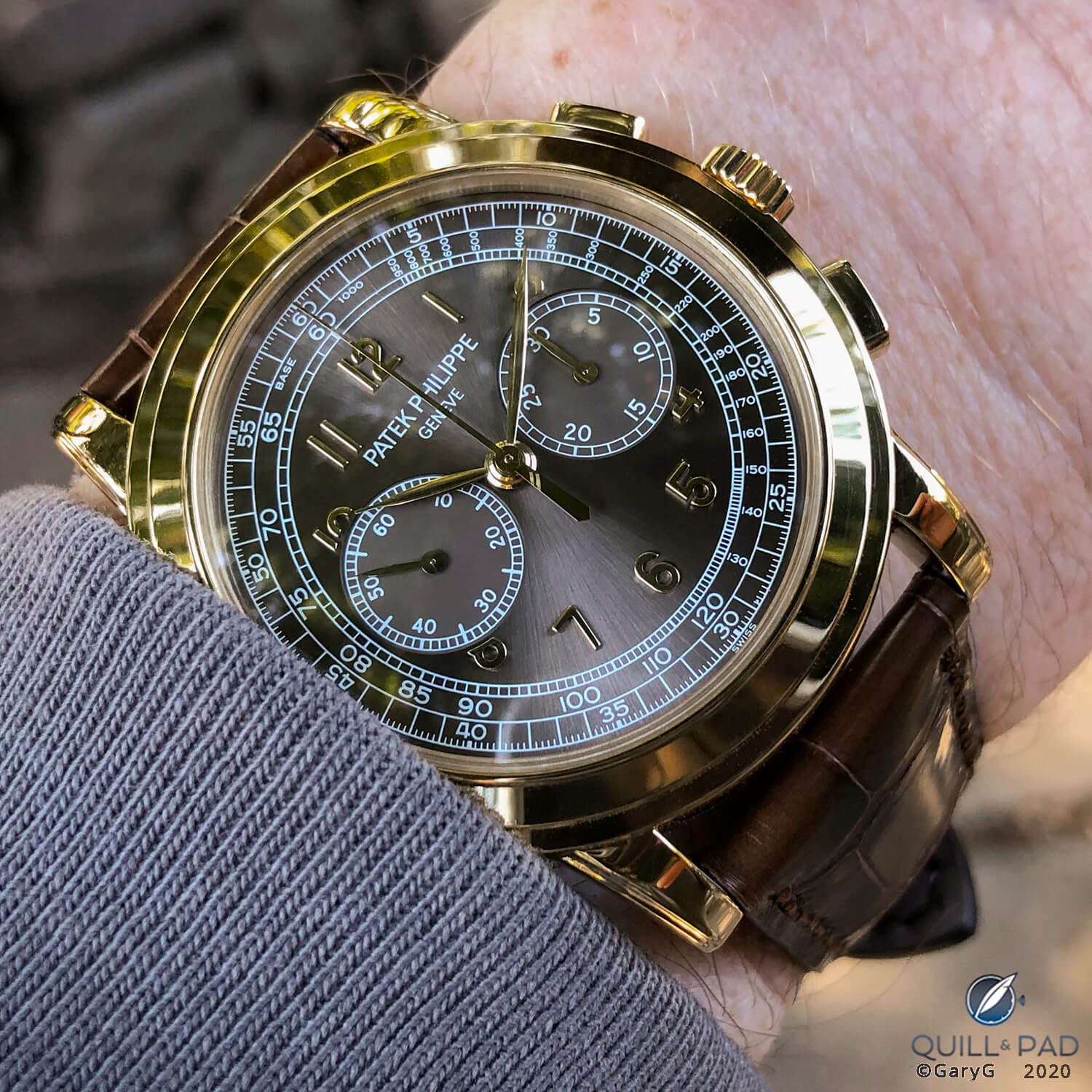 To be honest, I was expecting this watch to be considerably more challenging to shoot than it turned out to be given its wide, polished bezel, dark dial, and yellow hands. The bombé curves of the feuille hands helped a lot in catching at least some light from every angle I tried. I also had fun capturing some images from non-traditional angles and found to my pleasant surprise that the somewhat uniform tones of the dial didn’t confound my focus stacking software and result in a bunch of fuzzy stacking artifacts. 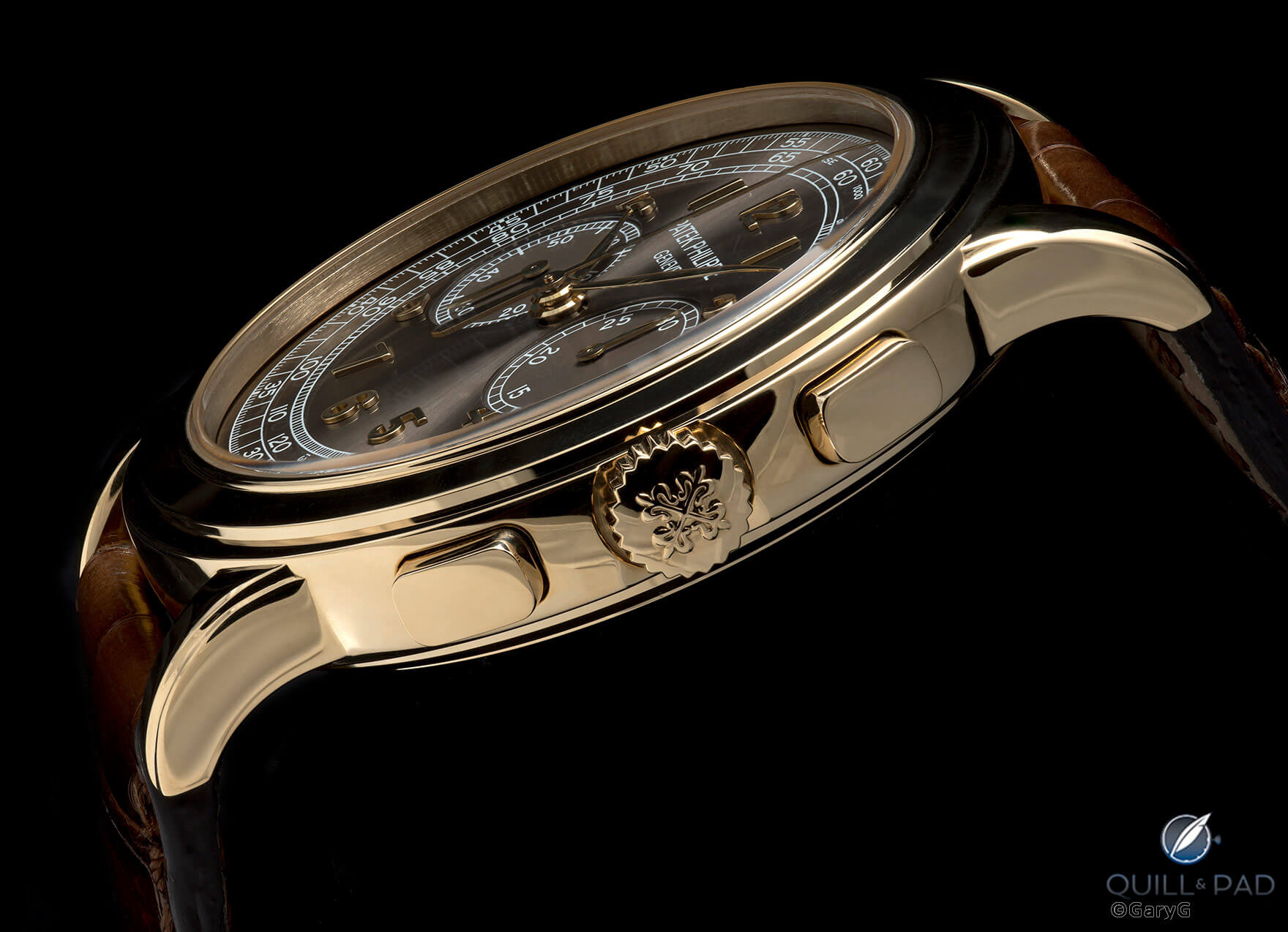 If you check out the image above, you can see that there looks to be a bit of shiny lacquer on the brushed dial, which both gives some depth to the perception of the brushing and allows for some attractive reflections of the hands, indices, and printed markings.

Once I got a bit of practice with positioning and lighting, things progressed fairly smoothly; and I should mention that the owner did me a real favor by presenting the watch to me in super-clean condition, saving all sorts of effort in cleaning before shooting and retouching afterwards. 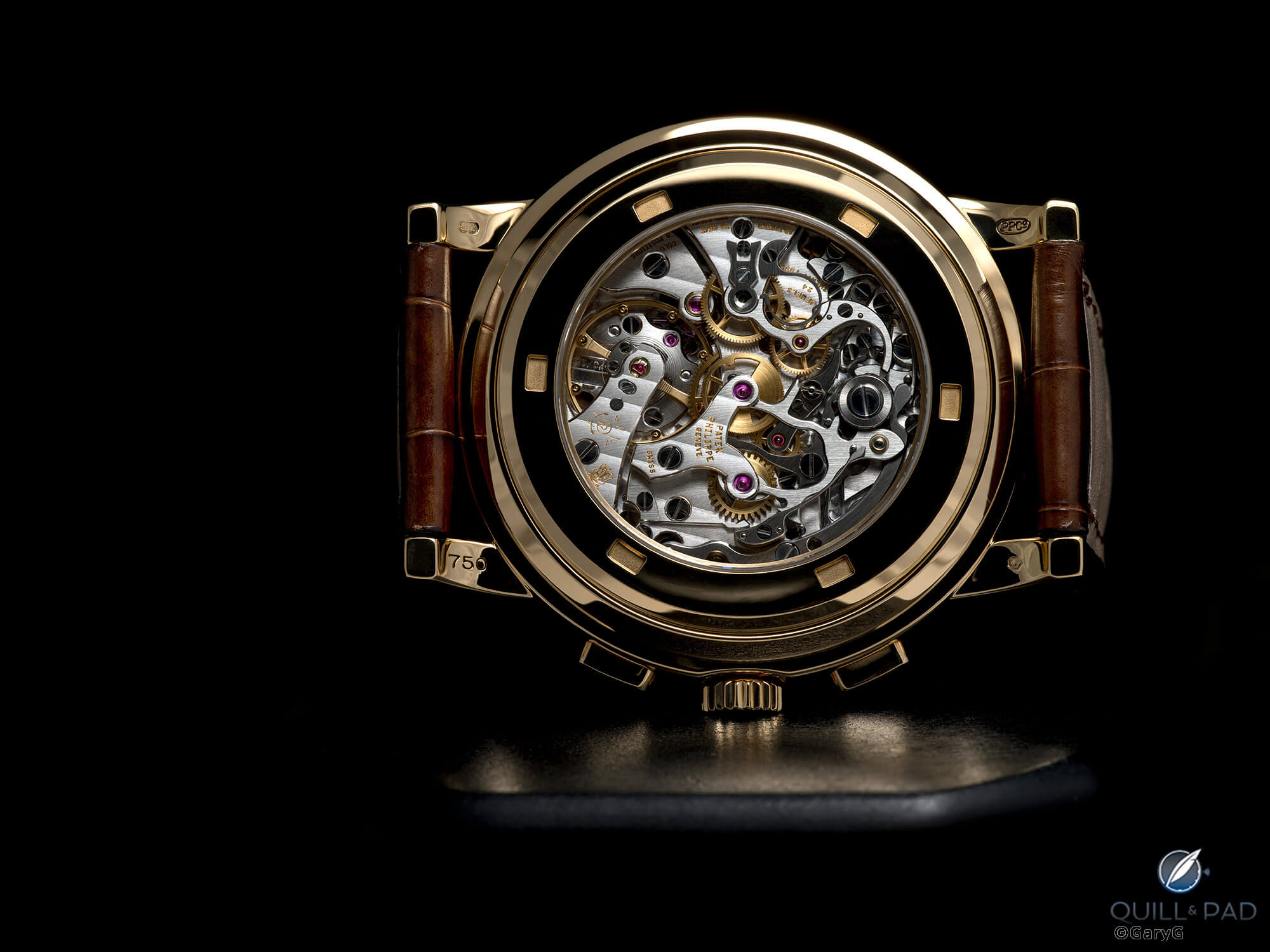 The fact that the movement is recessed into that field of gold bezel helps to bring some real depth to moody shots against a dark background as shown above, but the watch also lent itself well to some experimentation with a higher-key approach, as shown below. 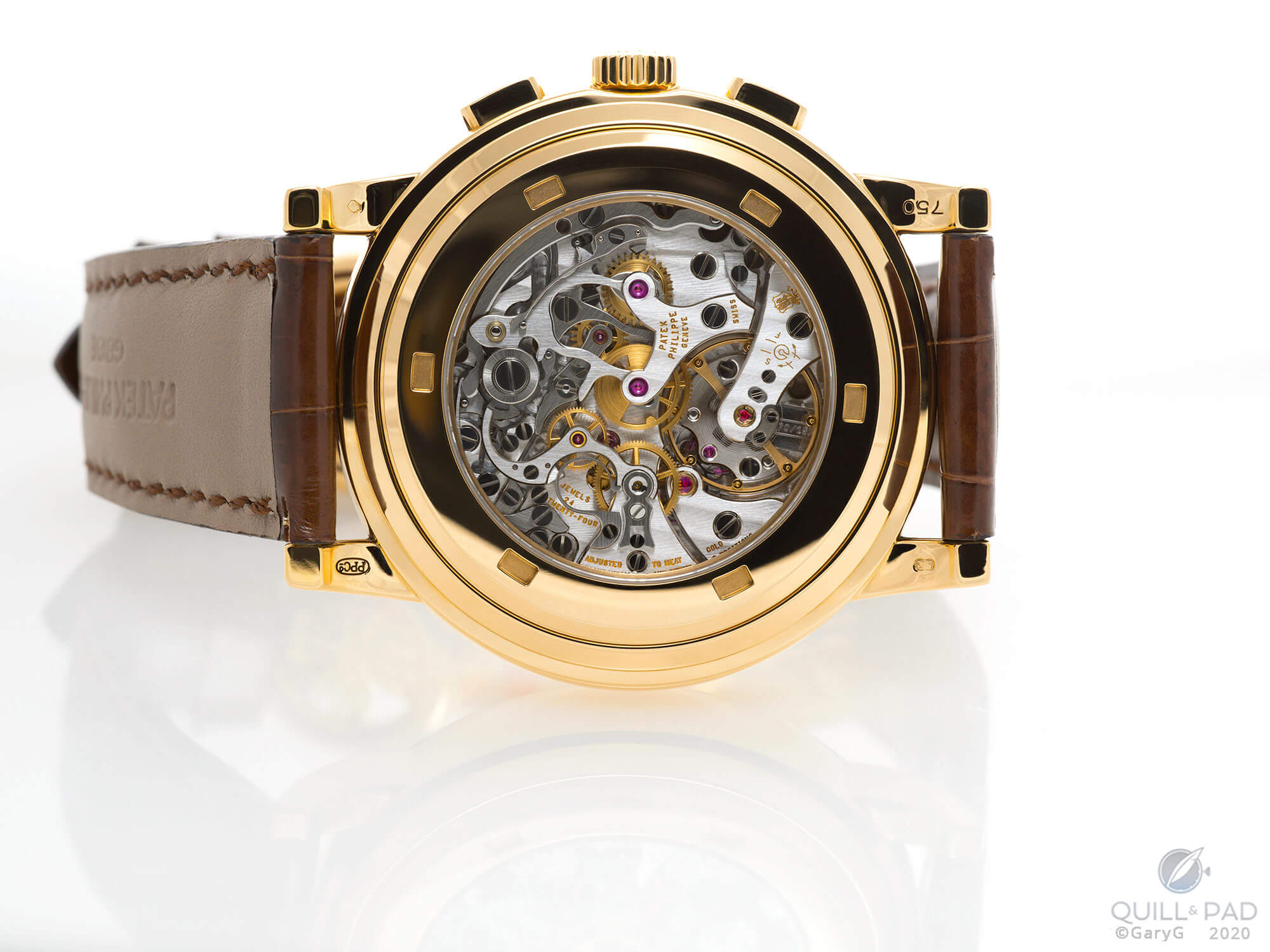 If I have one wish for you, it’s that your friends are as generous as mine! It was a real treat for me to have the chance to handle, research, photograph, and (very briefly) wear this beauty, and you can be sure that once our watch group’s tradition of frequent in-person lunches can be resumed, I’ll be bugging my pal to bring this one out of the vault for another look.

I’ll be interested to hear your thoughts on this piece and your experiences with “loaners” from friends in the comments below. In the meantime, happy wearing and happy shooting! 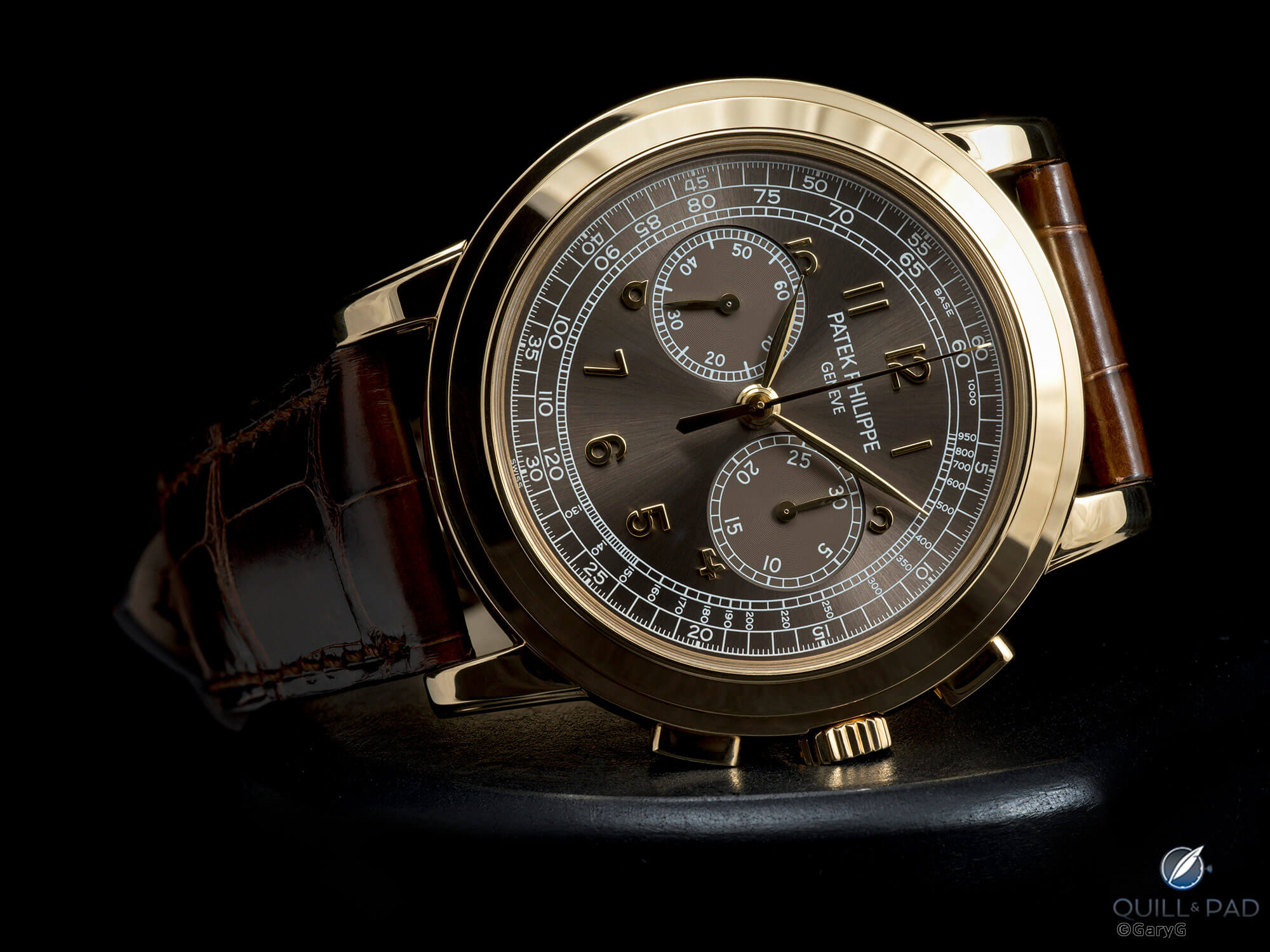 * This article was first published on November 6, 2020 at Behind The Lens: The Ultra-Rare Patek Philippe Reference 5070J-013.

Why I Bought it: Patek Philippe Reference 3940P-027 Vintage Collection

Why I Bought It: Patek Philippe Reference 5170P

Why I Bought It: Patek Philippe Reference 5370P