If you have ever watched awards ceremonies, you will know that people react wildly differently to the news that they won. Some appear stunned, looking around in astonishment before awkwardly getting up and walking to the stage. Others jump for joy at the news, high fiving and hugging everyone they can reach before joyfully bounding on stage to receive their awards. Or in the case of Roberto Benigni at the 1999 Oscars, climbing over chairs and hopping up the stairs.

One standout moment that comes to my mind is from 2016 when after years of being nominated and not called to the stage Leonardo DiCaprio win his first Best Actor Oscar. Many started to think that DiCaprio was simply being ignored or was cursed, but when his name was announced that night for his role in The Revenant, he simply smiled, looked slightly relieved, and coolly strode up to the stage and graciously thanked everyone involved in the film. There was no gloating, no spectacle of excitement, but also no lack of gratitude for the honor of the award. It showed real class to humbly accept it and highlight all the people who helped him get there.

Sometimes, pomp and circumstance is exactly what you want to display when you are honoring an achievement, but at other times it is much more appropriate to proceed with a simple smile, a nod, or maybe a wink to those in the know. This is a concept that often comes to my mind when a watch brand is celebrating an important anniversary. The brand has to decide if it wants to go big, making it a blowout event holding nothing back, or simply communicate, “We did a thing, and it was cool, and here is something new to mark the occasion.”

The answer differs for each brand, but one might hazard an educated guess which is more appropriate for the brand I am highlighting here, one with extensive history and a tendency to play it safe, keep it classic, and choose the more subtle route – which is exactly what Breguet has done with the new Classique Tourbillon Extra Plat Anniversaire 5365. 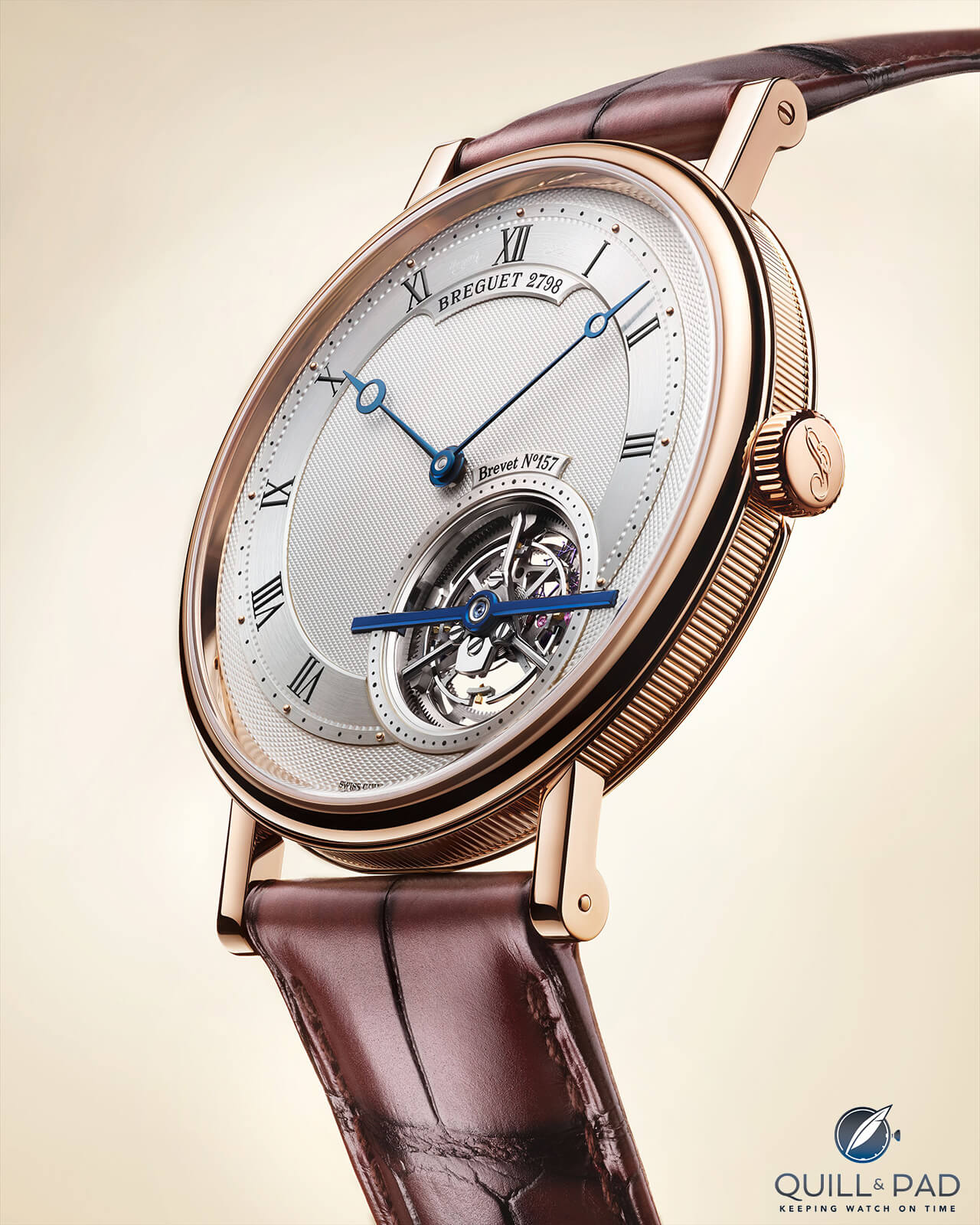 This new timepiece marks the 220th anniversary of the invention of the tourbillon by Abraham-Louis Breguet and it approaches the milestone with restraint and a nod to those in the know.

The core of the Classique Tourbillon Extra Plat Anniversaire is in the first word in the name: “classic.” The design is perfectly classic with the major modern compromise being the exposed tourbillon on the dial, arguably the main reason the watch exists in the first place. When Breguet first debuted the Classique Tourbillon Extra Plat in 2014, it sported a power reserve display that was dropped on a later version with grande feu enamel dial. Another subsequent iteration contained a fully skeletonized movement with no dial.

The new Extra Plat Anniversaire 5365 returns to simplicity and form with the type of full guilloche dial that Breguet is so well known for. The dial ring is slightly offset to the upper left toward 10:30, which provides extra room for the tourbillon window at 5 o’clock. This window showcases the technical-looking tourbillon, which displays hints of the very early tourbillon mechanics while also feeling incredibly modern. This is aided by the clean angles right next to the silicon escape wheel and flat silicon balance spring. 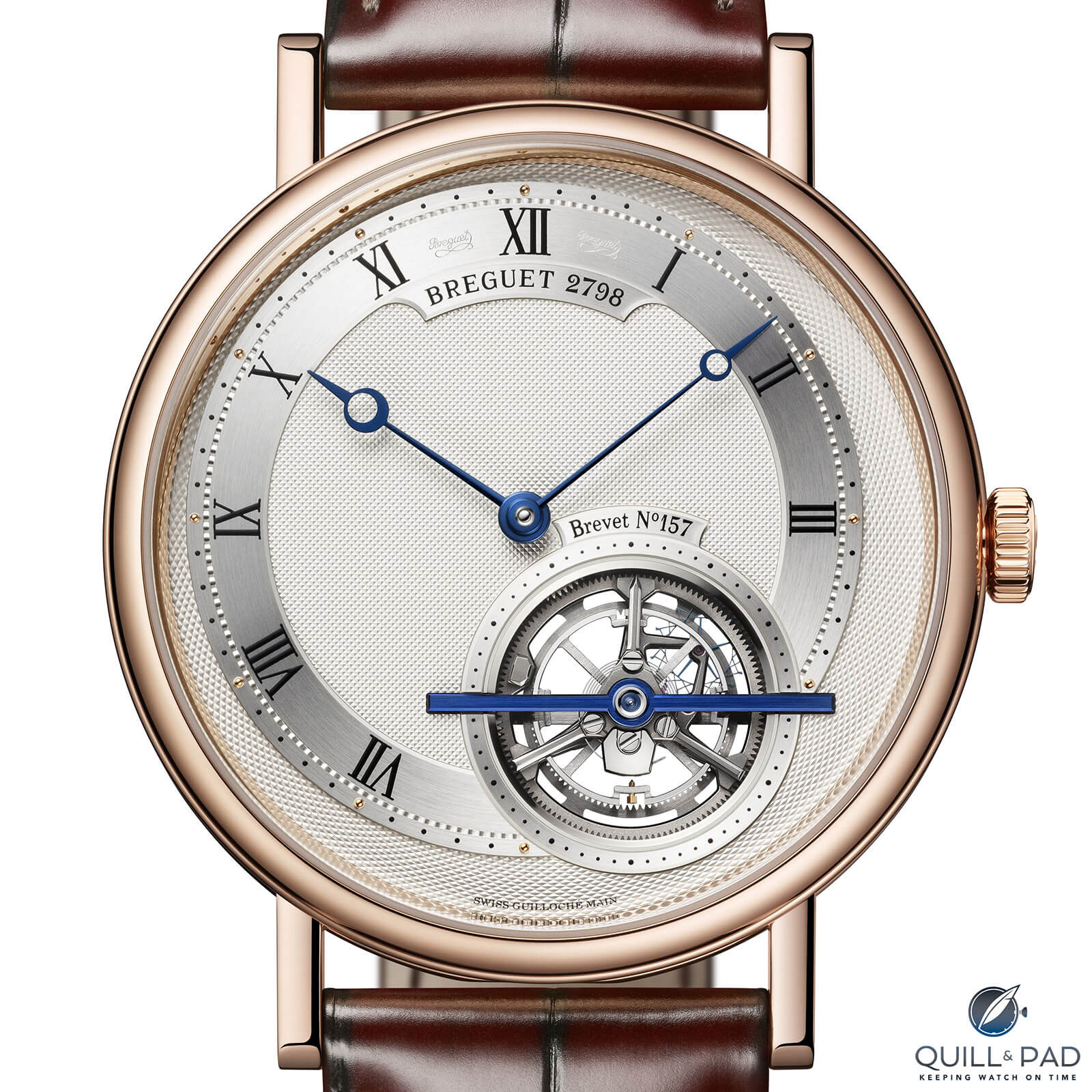 The balance bridge is a straight-brushed and blued-steel line bisecting the window, holding a blue sapphire capstone jewel for the tourbillon cage unlike the more traditional red ruby. The performance is no different as the stone is functionally the same, but that visual change is a tiny yet dramatic shift for anyone who has seen a wide variety of watches. The combination of the bridge and sapphire go hand in hand with the blued-steel hands in the traditional pomme style that have become so synonymous with Breguet that they are ubiquitously called Breguet-style hands.

Now that is staying power.

Since the aesthetic has been defined for such a long time, little tweaks go a long way while providing an avenue for little Easter eggs that Breguet fans will enjoy. These are basically where the Classique Tourbillon Extra Plat Anniversaire becomes the subtly different “Anniversaire” model.

Media nerd side note: an Easter egg is a message, image, feature, or reference hidden in a piece of media that has a secret meaning or provides a callback to some earlier work of media or pop culture. These can often be hidden in plain sight and simply provide an additional layer of context for consumers of the content that are more deeply versed in the media. Easter eggs can also provide additional functionality to software or games or simply be visual treats – with a prime example being every Pixar movie featuring the Luxo ball or the number A 113 among many other repeated elements.

The front of the watch is different from earlier iterations of this model thanks to the guilloche dial and lack of a power reserve, a combination not previously seen. But this isn’t exactly new, just a different combination of already existing details. The tourbillon bridge in blued steel, however, is a detail unique to this model, something not found in any other piece currently made by Breguet – and quite possibly unique among all modern watches from the brand.

This seemingly simple aesthetic choice harkens back to the need for steel components to be heat-treated (temper the steel until it becomes cornflower blue) to prevent oxidation and corrosion over time, a serious problem for early steel alloys.

The finely polished tourbillon cage has no functional need for bluing now, but the contrast provides a nice pop of color and reminds history-savvy watch aficionados of techniques crucial to long-lasting movements from more than two centuries ago. 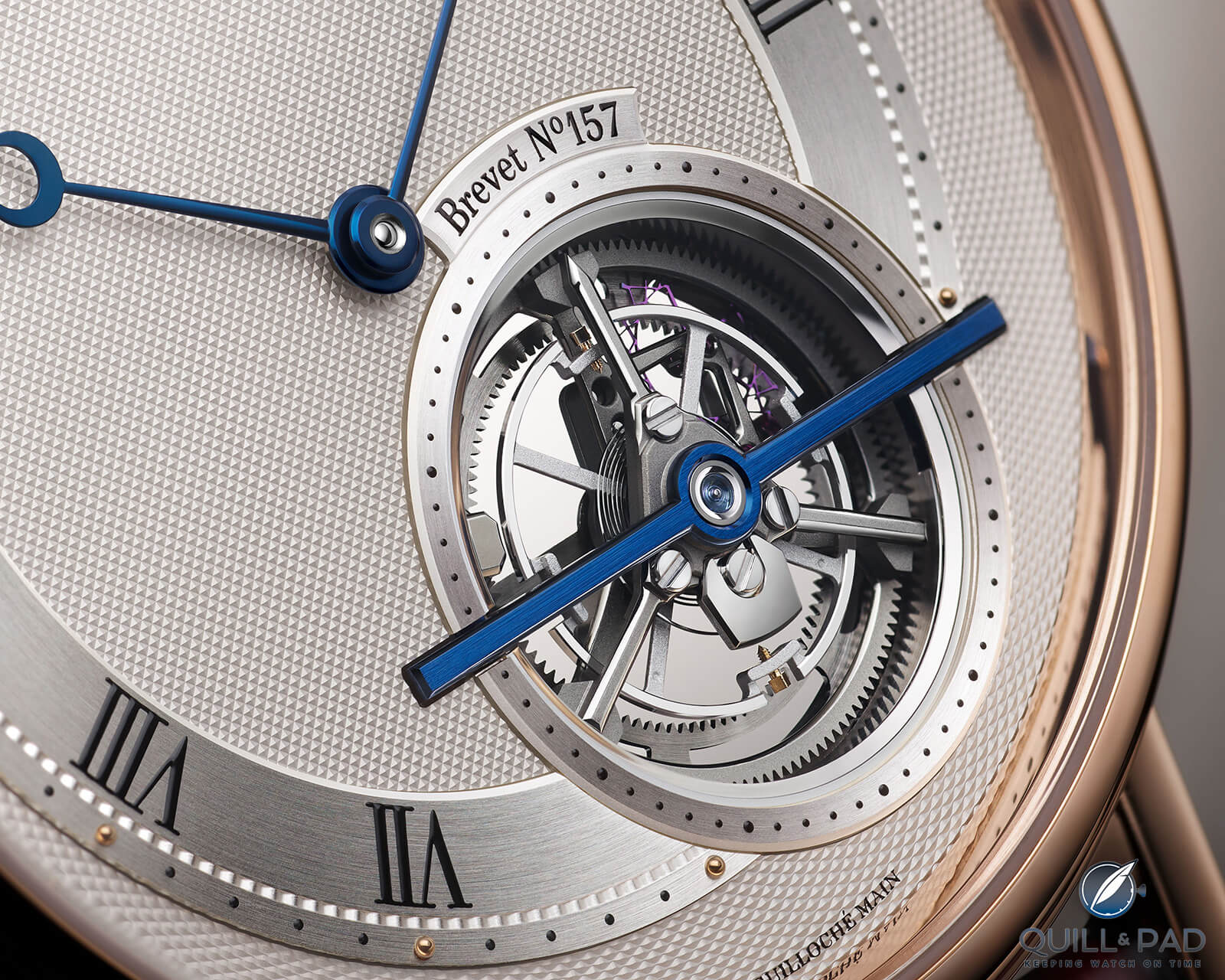 The first real Easter egg is above the tourbillon window: the small plaque bearing the words “Brevet No 157,” referring to “Patent number 157,” the actual patent number awarded to Abraham-Louis Breguet for his tourbillon invention.

This is a hardcore Easter egg if you ask me: I had never seen the actual patent number for the tourbillon as all the images I have come across were not of the official patent, but rather a drawing included in the patent application. A cursory internet search also turned up no mention of it before this year, when Breguet made it known with the release of this watch. This is a deep-cut Easter egg, and a very cool one.

The next Easter eggs are found on the rear where the movement displays a variety of special engravings just for this anniversary edition. “Brevet No 157” is here again, this time across the rear tourbillon bridge, followed by the phrase “Du 7 Messidor An IX,” which is the date the patent was awarded. 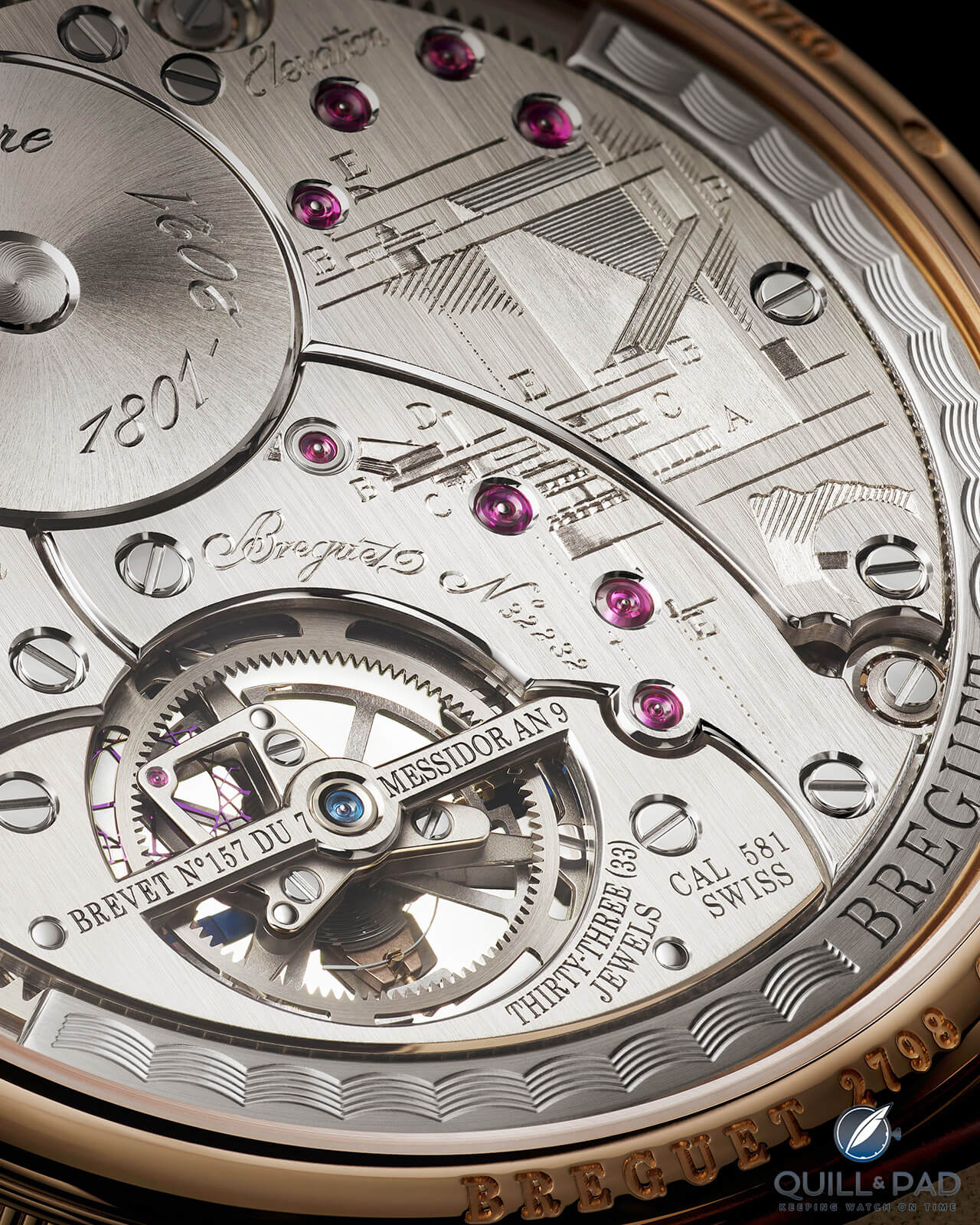 “Du 7 Messidor An IX” is a bit of a double Easter egg because the patent was awarded during the very short 12 years, three months, and nine days that the French Republican Calendar was in effect after the French Revolution. The date corresponds to June 26, 1801 (the seventh day of the tenth month in the ninth year). This is something that both memorializes the date of the patent and puts the entire life and works of Breguet into historical context, placing him smack in the middle of the French Revolution and its aftermath.

It’s often easy to forget when we discuss watchmaking history, but the seventeenth, eighteenth, and nineteenth centuries in Europe were periods of dramatic upheaval and change; the fact that talented watchmakers were able to produce what they did is remarkable in context.

That achievement isn’t just alluded to here, it is fully represented by an engraving of the patent drawing across the entire rear of the movement bridges. The elevation watercolor drawing of the patent illustration is famous in its own right and has been carefully transcribed to the rear of Caliber 581, flanked by the modern tourbillon to the lower left and the smooth sunray-brushed mainspring barrel engraved with the anniversary dates to the upper left. 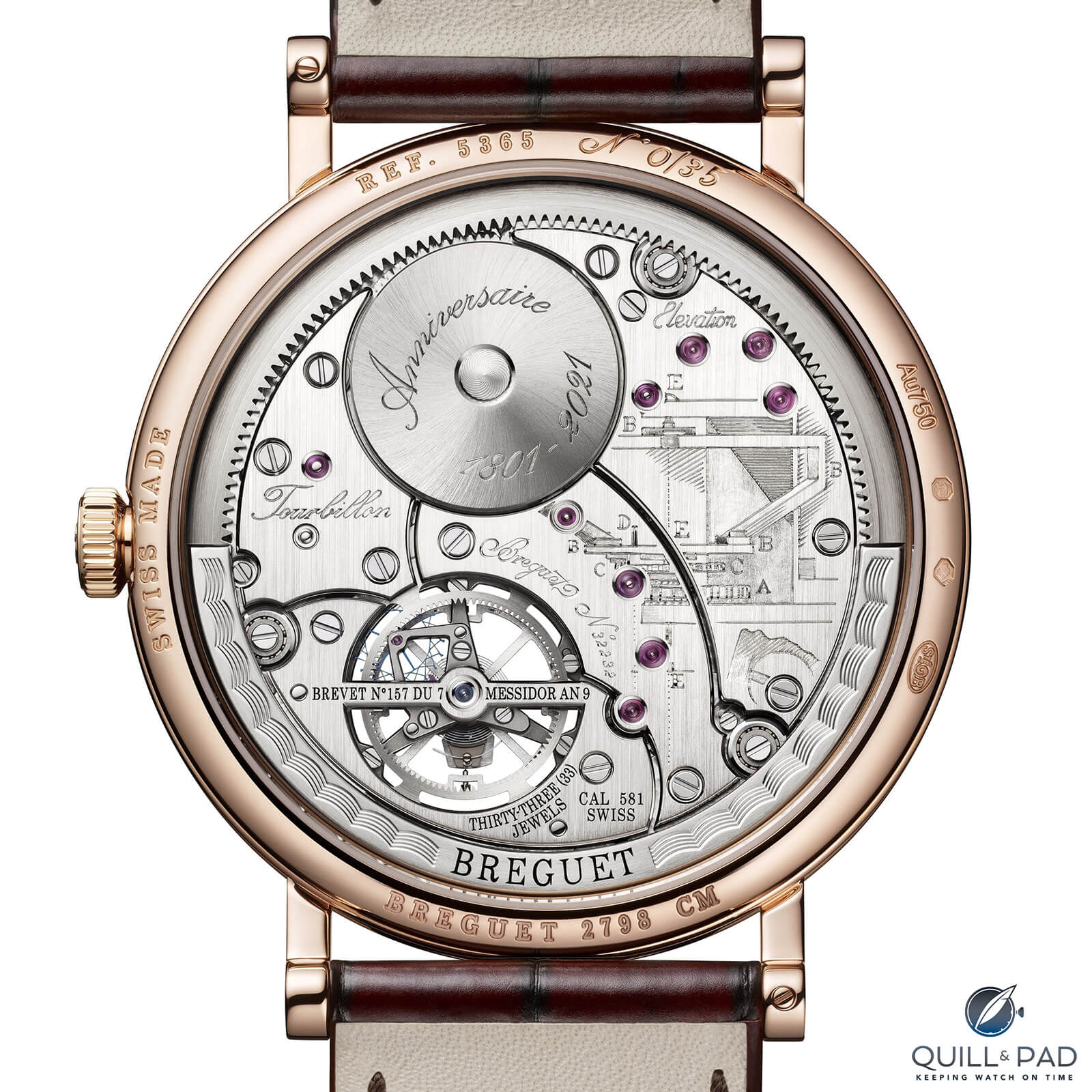 That engraving is a much more obvious Easter egg, and a fun one. Surrounding the movement’s outside edge is the peripheral oscillating rotor supported by three ball bearings and highlighting another Breguet invention, the automatic winding mechanism. The system Breguet developed was very different to the ubiquitous automatic winding mechanisms we know today, but the idea of an automatic watch was contemporary to the man who started it all and feels appropriate on this piece.

The final Easter egg is found on the case via the limited-edition number on the case back. Astute followers of Breguet know that the master employed many craftsmen during his life with his company producing approximately 17,000 timepieces while he was alive and only a tiny fraction produced by the man himself. In all, we only have records of 35 tourbillon watches he personally made, the same number of watches in this limited edition. 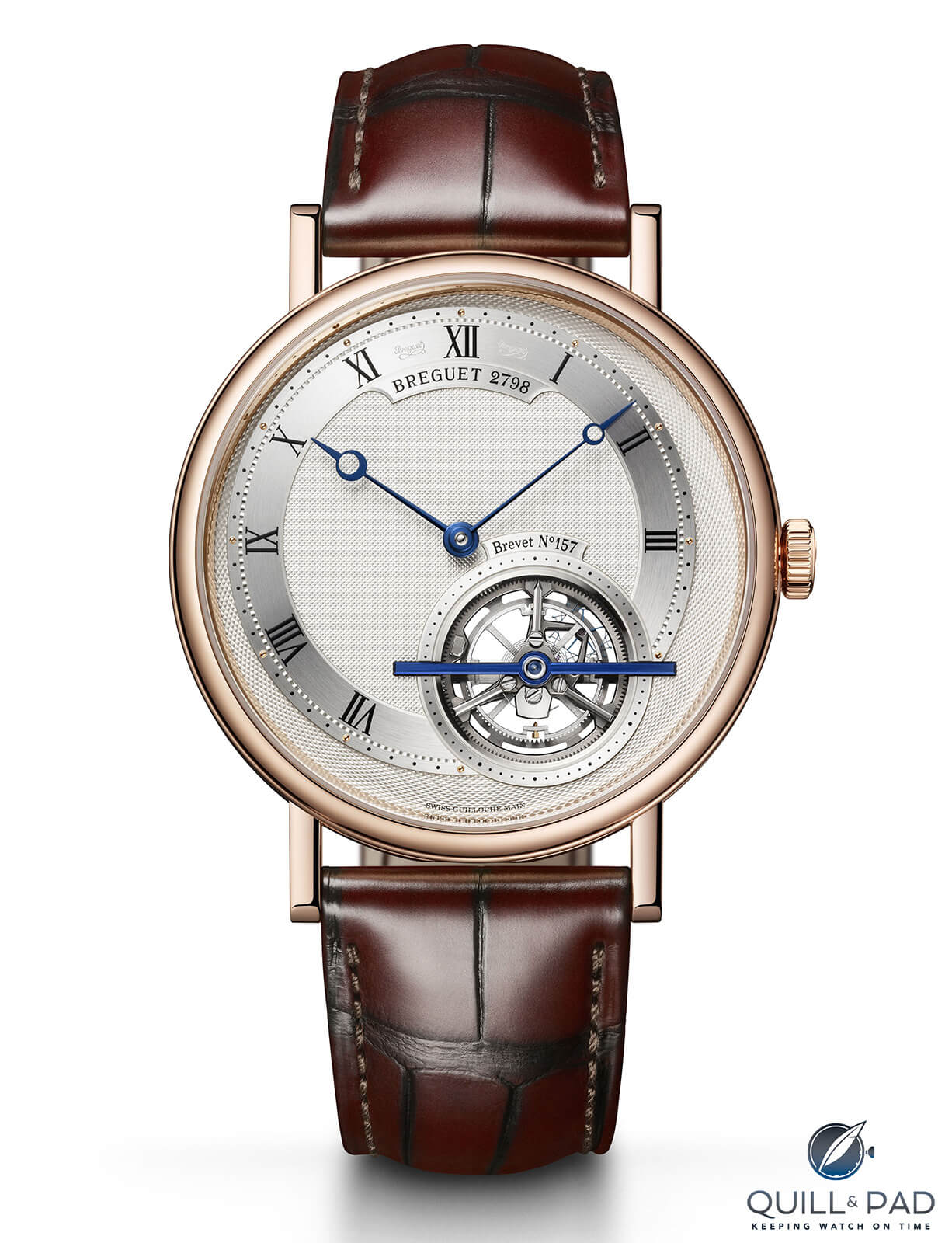 This is the truest wink and nod to Breguet the man that the Classique Tourbillon Extra Plat Anniversaire contains. The other Easter eggs are either subtle details or obvious homages to the patent, but the limited-edition number is a simple acknowledgment of what Breguet accomplished himself during his industrious life.

Two hundred and twenty years after he was granted his patent (and even longer since he began developing the tourbillon), the modern Breguet brand expertly and with class and restraint honors Breguet the man and his most beloved and famous invention. The delicate guilloche dial and other brand hallmarks create an understated tribute to the invention of the tourbillon, highlighting that the modern brand didn’t react like Roberto Benigni but instead proceeded with a humble smile like Leonardo DiCaprio to produce an utterly classic yet modern watch that would make Abraham-Louis Breguet proud.

Since the Classique Tourbillon Extra Plat Anniversaire 5365 features a silicon escapement and hairspring, I can rest assured that I won’t disturb the watch while we break this down!

*This article was first published 04 December 2021 at Breguet Classique Tourbillon Extra Plat Anniversaire 5365: Celebrating 220 Years Since The Invention Of The Tourbillon With Easter Eggs

Why I Bought It: Hajime Asaoka Tsunami – Reprise