C by Romain Gauthier: A Continuum of Lifelong Learning

Range, span, series, distribution, spectrum, sequence, continuum; all of these words relate to the idea of a small or large set of things that are related yet distinct from each other and show a change from one state to another. You may find these words in any discussion of evolution or human development, especially when considering technological advancement. The slow move from hunter-gatherers using stone tools and later fire, on through pottery, fabrics, and agriculture before discovering metal working, showed a continuous sequence of small advancements in human technological capabilities.

It began to pick up speed once we developed sailing, iron tools, wind and water mills, and increased in speed once again when the steam engine was invented. This advancement, combined with the development of precision manufacturing for clocks and scientific instruments alongside the scientific revolution, caused an almost literal explosion in technological progress, and the series of inventions and advancements now came in a flurry.

But looking at history in this wide perspective, we probably wouldn’t think of the progress as being a smooth continuum because it seemed that inventions came from nowhere and truly sparked revolution overnight. But at nearly no point in human history has advancement happened this way. The first person to truly harness fire probably learned from many generations of his tribe how to be careful around wildfires, and secondarily how to use fire to cook food while trying to contain it from spreading.

People inventing metal smithing didn’t just find ore one day and discover how to process it, heat it, and shape it, it had been known for centuries or possibly millennia that there were these soft chunks of malleable metal found in the ground (gold, silver, copper, and lead) that could be pounded into useful shapes. Metallurgy developed from constant experimentation and small incremental expansions of knowledge.

The same can be applied to computer technology in the 20th and 21st centuries, which was based on developments in mechanics from centuries with clockworks, adding machines, and difference engines alongside the understanding of electricity, voltage, magnetic fields, and later semiconductors.

The pace can be much faster than in the past, but advancement truly is a slowly morphing continuum based on small improvements, discoveries, and adjustments to what has come before. Even giant leaps, when looked at more closely, are only the continuation of decades of development in various fields finally being applied together. A continuum is by far one of the best ways to describe technological development over time, as well as a personal journey to learn and grow in skills and knowledge. 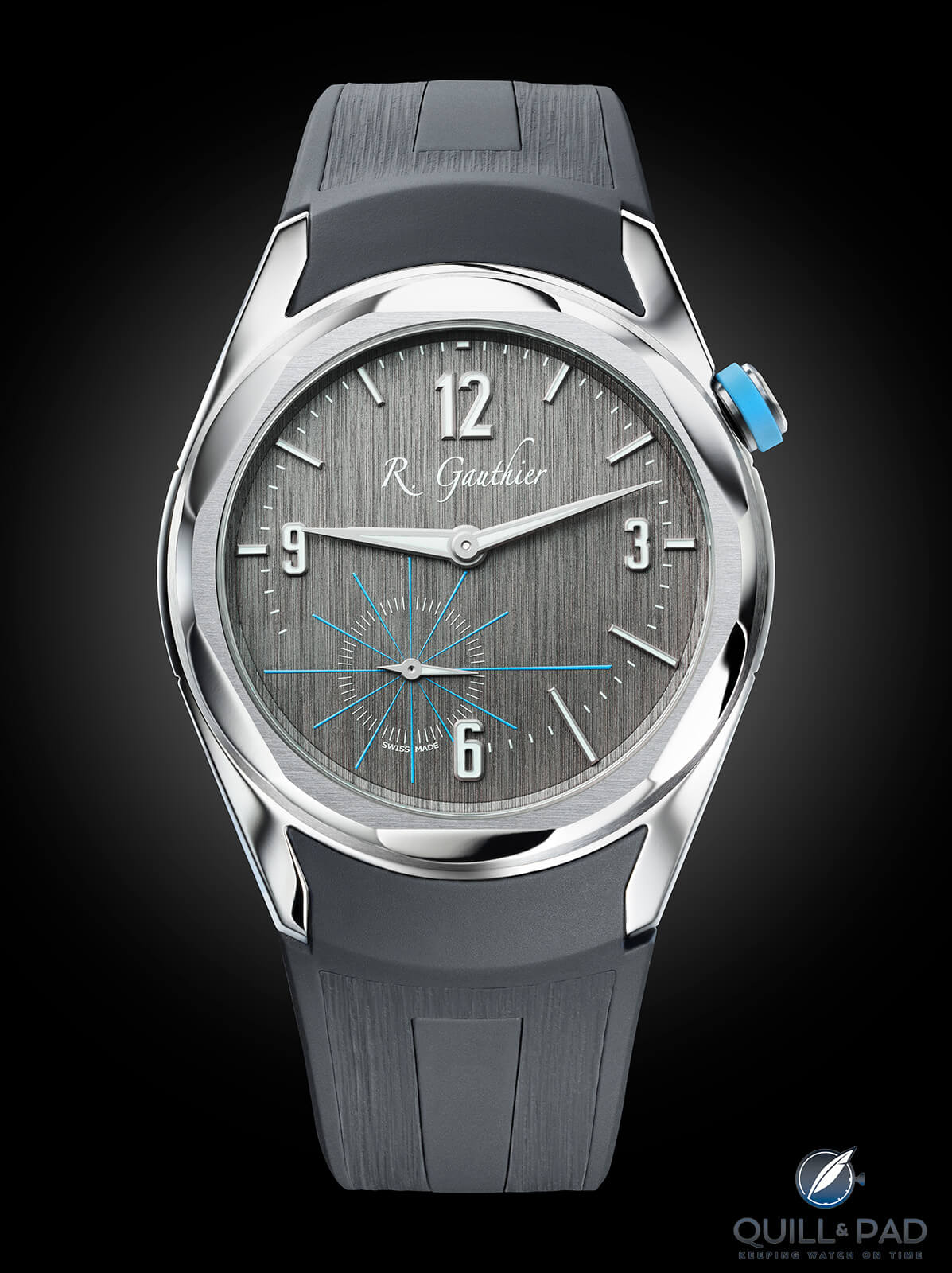 That is why when Romain Gauthier released a new model, his first fully new design in a few years, it was named the Continuum to highlight how he had slowly grown and changed, and this new model was the result of a continuum of knowledge and skills acquisition. After the initial launch the name also changed to C by Romain Gauthier showcasing how not even names will stay the same on a continuum of development.

First launched towards the end of 2021, the Continuum, now known as C by Romain Gauthier, is the brands take on a luxury sports watch without falling into the trap of trying to be another voice in the steel sports watch market. The first piece launched in titanium, followed by platinum editions, a unique piece for OnlyWatch, and now a new titanium edition. It doesn’t come in a steel case with the typical textured dial and multi-link bracelet with automatic movement.

The C is a time-only watch bearing an off-center seconds dial at 7 o’clock with applied markers and numerals, either Arabic or Roman depending on which collection it’s in. The Heritage collection C features a platinum case with choice of dial colors, each sporting white gold Roman numeral hour markers that have been straight brushed plus minor hour markers in chamfered and brushed white gold. Switching to the Freedom collection the C utilizes a titanium case and Arabic numerals, these also chamfered like the minor hour markers. 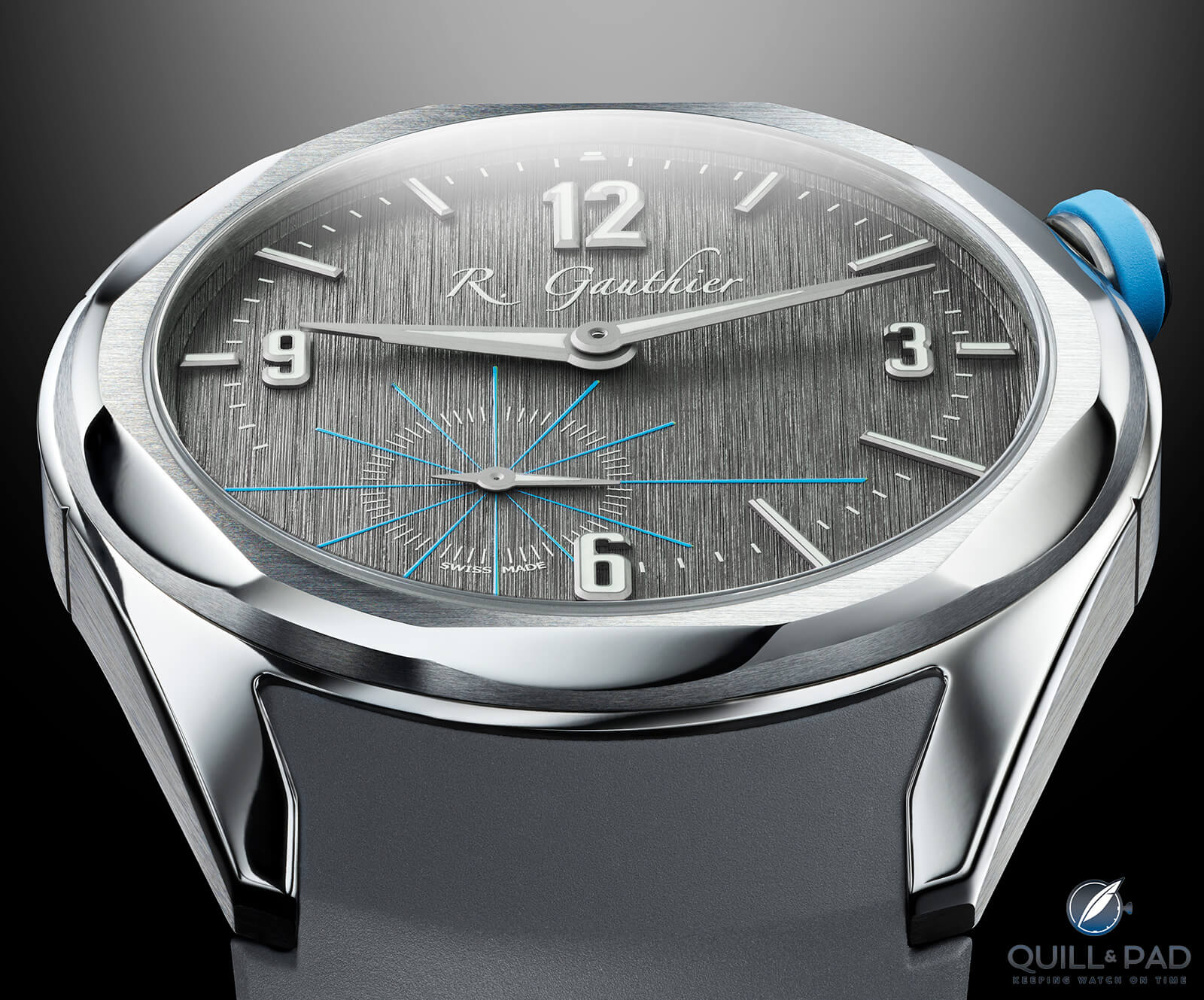 Instead of plain brushing, these markers are filled with Super-Luminova, following the lume-filled hands featured on all editions. The dial is also made from titanium to match the case, and the crown has a rubber grip instead of the ruggedly knurled version found on the platinum. All versions have the same case design, a very streamlined shape that plays with the bezel design to add some flair. But instead of creating a consistent shape like many others, the C uses a round bezel with flat brushing on the top and outer edge, and polished radius in the middle.

That radius is broken up by chamfered sections, six in total, that undulate around the bezel edge so that around bezel and shaped bezel both exist concurrently, something I have never seen done on any of the typical sports watches. One more reason this piece isn’t competing in that already crowded field. Moving to the rear of the watch we see the biggest departure, the C by Romain Gauthier caliber. Large, chamfered finger style bridges with a double chamfered edge, raised border, textured center, all finished to the nines, and conspicuously missing a micro-rotor or other automatic winding mechanism.

Romain Gauthier inside and out

Unlike the typical luxury sports watch which focuses on wearer convenience with an automatic movement, Romain Gauthier is first and foremost about your interaction with the watch, and that comes through with the C. There was a clear effort to make the movement something worth looking at, something that lived up to the incredibly high standards of Gauthier himself. 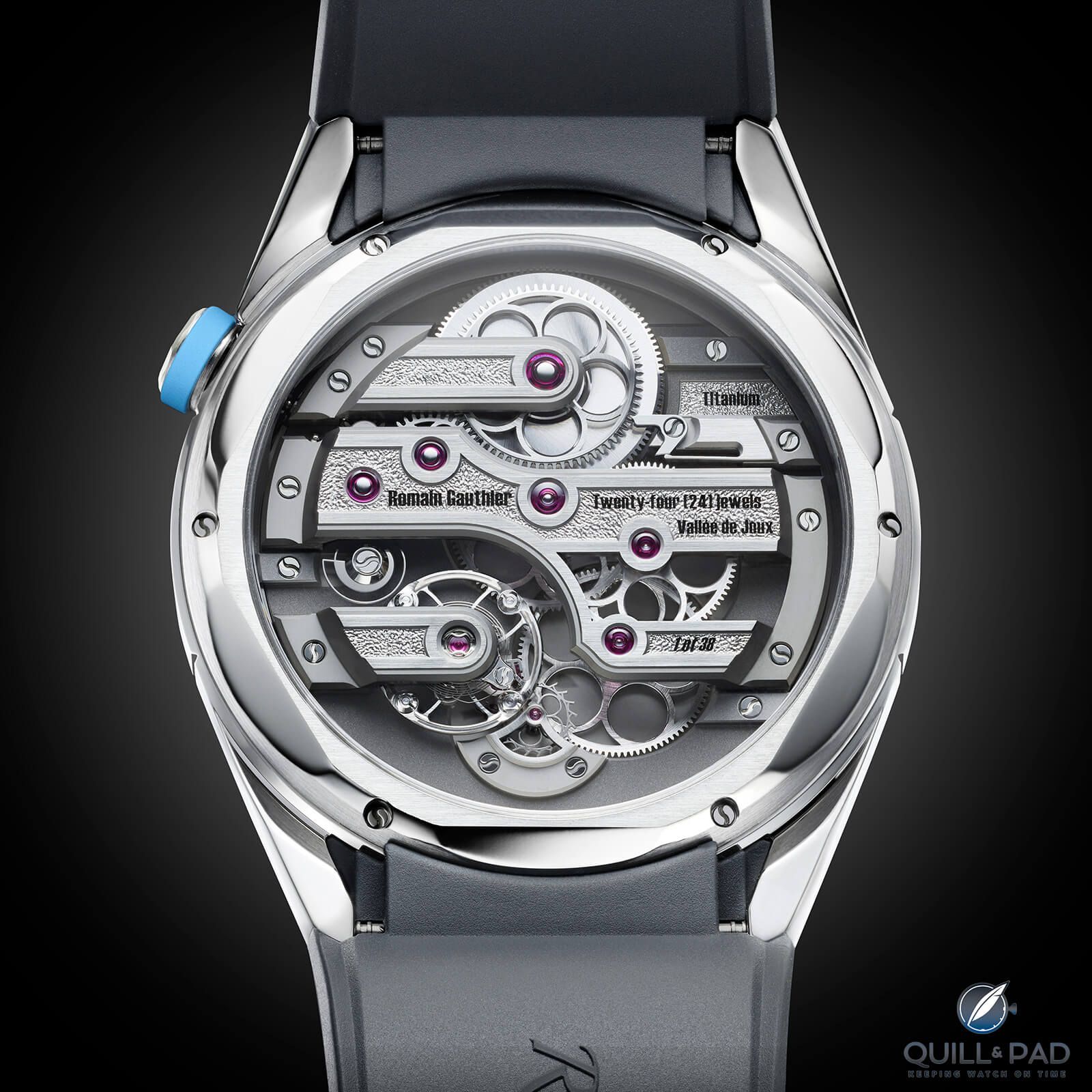 Movement visible through the display back of C by Romain Gauthier

It isn’t just a good-looking mechanism it is uniquely innovative and fascinating. The stop balance mechanism is no hair thin lever that gently touches the balance to stop it from beating while you set the time, it is a spiraling snail cam that rotates to tangentially interfere with the rim of the balance. The spiral is skeletonized and only connected very minimally to the central spiral, allowing for a spring action of the snail cam when it rotates to stop the balance.

Once you are done setting the time and go to release the balance, the snail cam doesn’t just lift off the balance but rotates quickly away, using its radius to push the balance like an impulse, helping to get it moving again and providing a faster, more isochronal release. A small detail to some, it demonstrates the ability to take the history and engineering that has come before and rethink it with a modern twist (literally) to achieve a historically developed function.

This is how I would define Romain Gauthier movements as a whole, modern mechanical and aesthetic twists to the most classic of concepts. Just remember how the Logical One turned the idea of constant force and the fusée-and-chain on its head, also using a snail cam. From the circular spokes on all the wheels that provide lateral strength to the S-shaped screw heads to provide more torque when fastening, it’s clear that Gauthier’s background as an engineer will never leave the front of his mind when developing new ideas.

Aesthetics are no exception, either. The C is a great example of taking a very practical shape and adding just a couple small details that really transform the overall perception yet keep it easy to produce. The bezel design is a subtle departure from what might be expected but fits perfectly within the aesthetic evolution of Romain Gauthier models over the years. 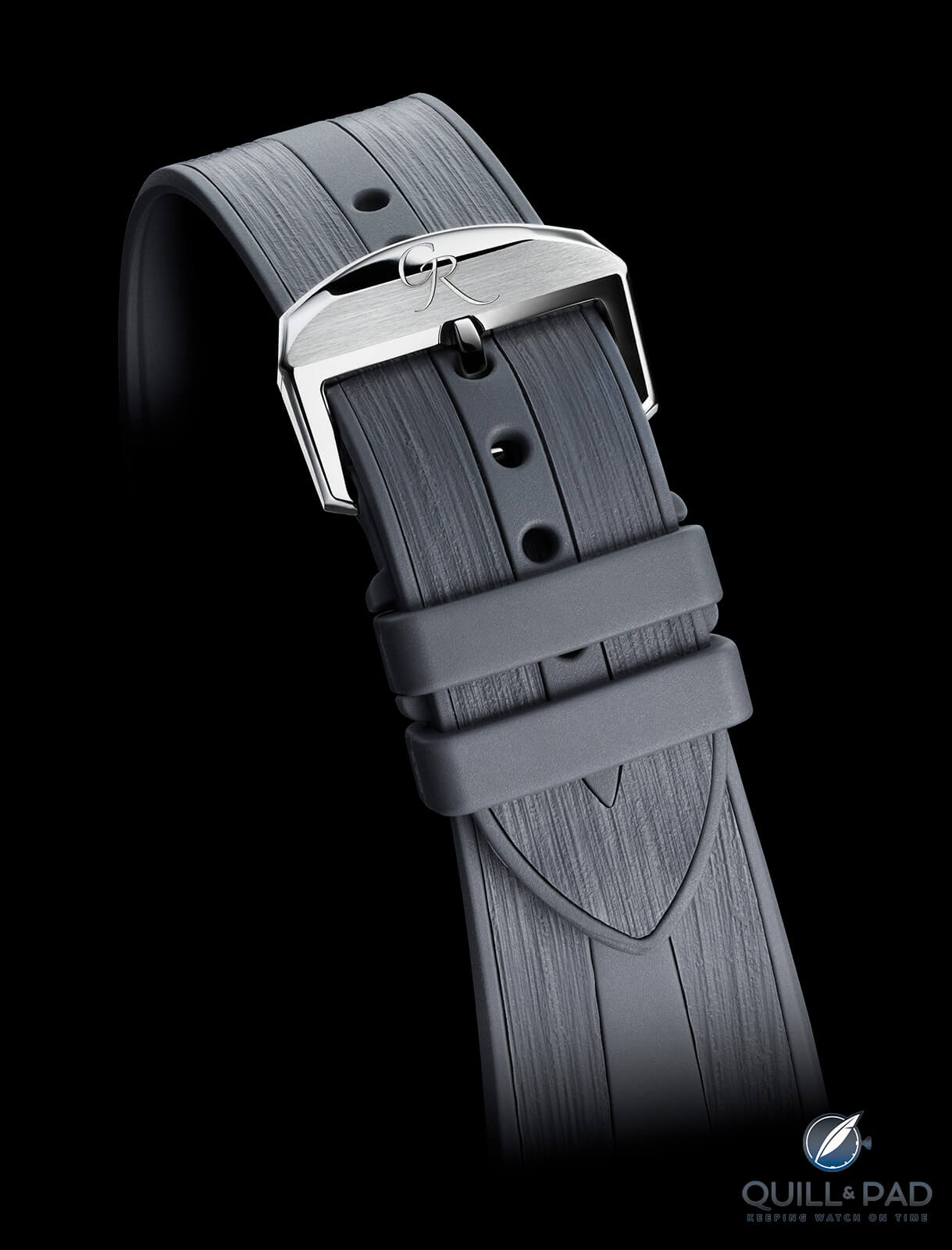 Strap and buckle of C by Romain Gauthier

The side of the main case structure, instead of having a lot of bevels, angles, recesses, or multiple layers is impeccably simple with straight brushed sides and two simple, vertical notches that run from the upper to lower bezel. This amount of visual detail shows incredible restraint, and at the same time a desire to try for a different feel to the case. It feels a bit like an old 70’s HiFi stereo knob, an aesthetic choice mirroring the star bust lines of the off-center seconds dial.

Reminiscent of the Nelson Ball Clock that popped up in the 50’s, the dial has very thin colored lines that radiate from the center, growing in thickness the farther from the center they travel. The horizontal line at the center crosses the entire dial and the others extend well beyond the hash marks creating the edge of the dial which immediately made me think of the atomic imagery that became popular in midcentury design. This retro aesthetic fits in flawlessly with all the other details to create a watch that feels timeless and also evokes different eras.

It is as if the design is intended to elicit thoughts of all moments of the modern eras of watchmaking, demonstrating the true continuum of design, engineering, and science. Since watchmaking originally began as an extension of the scientific march of progress, this makes perfect sense. The second edition of the titanium model, which was a combination of black finishes and red highlights, pushed the design more towards the racing or tactical side, while the C by Romain Gauthier x Anita Porchet is a unique piece set for auction in December, 2022 and brings the aesthetic purely into the arts with a delightfully soft Grand Feu enamel depiction of the botanical drawings based on Chinese ink wash paintings. 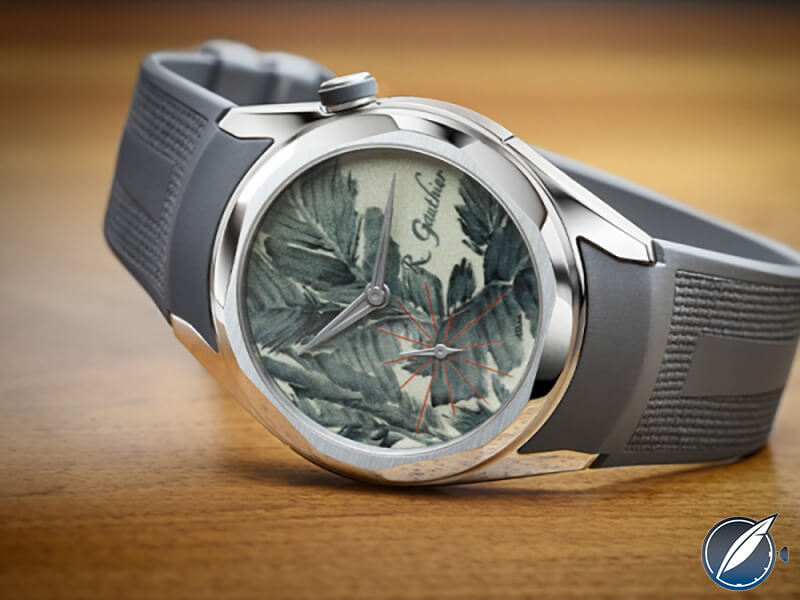 Variety placed into one watch model isn’t unheard of, but this compilation of eras, styles, and details makes the C an incredible timepiece. It provides an alternative for those seeking a luxury sports watch but that still wants more of a tactile connection with the machine on their wrist. Given that there have been at least seven editions so far, it feels safe to say this is only the beginning for the collection, and it will be fun to watch the continuum of pieces that come from the Continuum model line now dubbed C by Romain Gauthier. 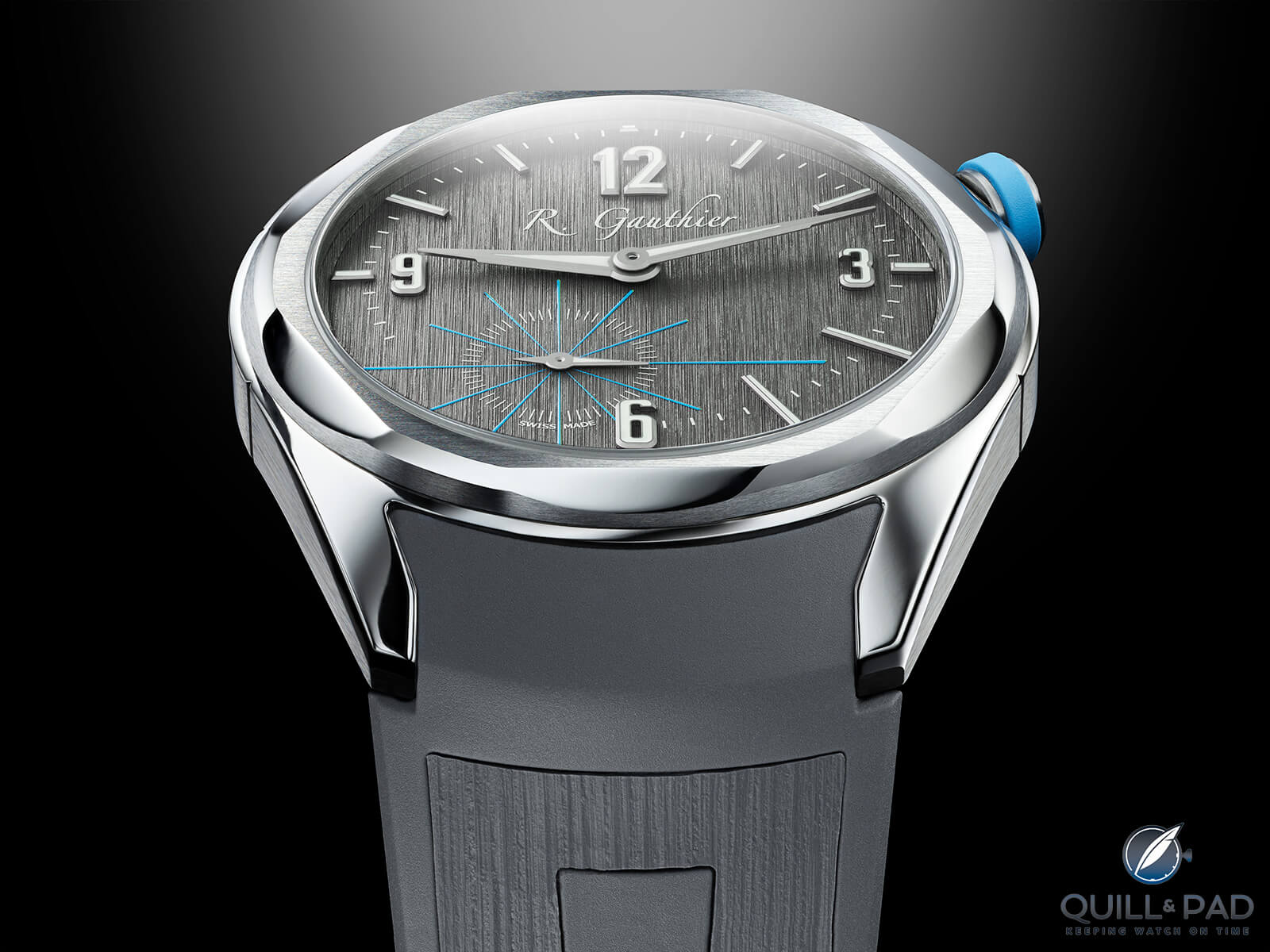 If you are already mixing details why not keep it going with naming conventions too, shake it all up and see what comes out!

While we see what’s to come, let’s try to break this one down!

Why I Bought It: Romain Gauthier Logical One

Does Hand Finishing Matter? A Collector’s View Of Movement Decoration