Humanity certainly loves gold. We have had an affinity for precious metals for at least 6,000 years and quite possibly stretching much further back – evidence of gold possession in caves in the upper Paleolithic go as far back as 42,000 years ago – that is a long time for humans (and possibly the last remaining Neanderthals) to be playing with the shiny stuff that is still so desirable and useful today.

The rest of the precious metals were discovered over the following millennia. Silver was found alongside copper deposits up to 5,000 years ago; platinum was used by the Egyptians 3,000 years ago and in pre-Columbian societies, though it wasn’t identified in the “west” until the eighteenth century, which is what led to the discovery of platinum group metals. That meant that humans had two well-known and one accidentally used precious metal for thousands of years before discovering five more, four of which were discovered the same year, 1803.

Palladium, rhodium, iridium, ruthenium, and osmium are all commonly found with platinum, and early experiments after its identification in 1735 to isolate and refine platinum left byproducts that weren’t accurately identified for almost 70 years (or 109 years in the case of ruthenium). These are the rarest precious metals. And the rarest of the rare is osmium, the densest naturally occurring element and one of the rarest elements in the earth’s crust.

Osmium is so rare and dense, has such a high melting point, and is so hard to form or compress that it has very few current uses. It is difficult to isolate: depending on method, possibly taking up to seven distinct processes to refine out pure osmium powder that can be used to grow osmium crystals or process using powdered metallurgy techniques. But osmium is extremely sought after and valuable for its aesthetic properties, especially in crystal form. 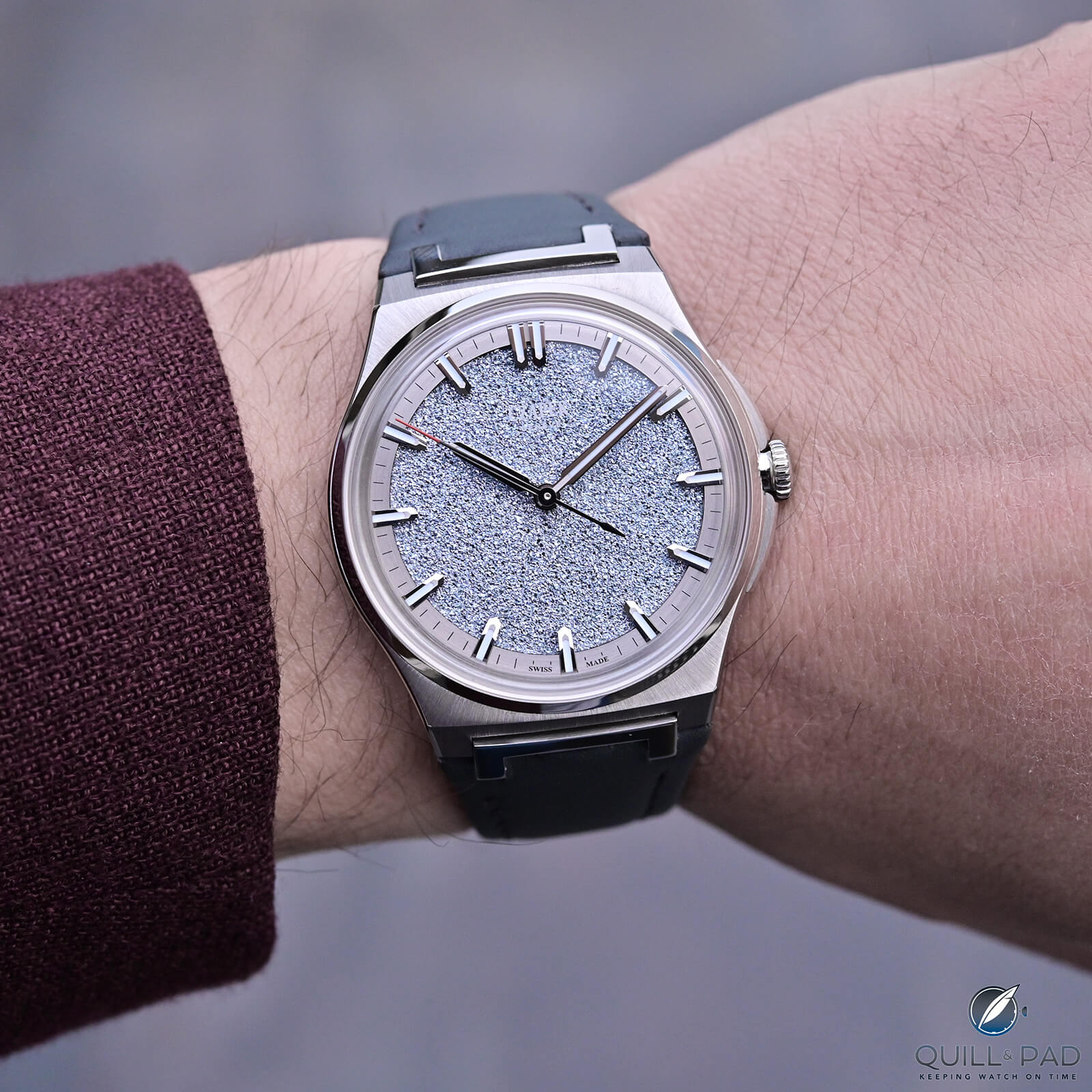 Osmium crystals are highly effective light reflectors and usually grow in a thin, chaotic formation in a process first developed by Swiss scientists in 2013. This was important as osmium in a raw powder state is very toxic to humans unless processed and alloyed with other metals or melted into a bulk metallic solid, so the new crystal-forming process was a boon to people who wanted to use it in jewelry – or in the case of Czapek & Cie, a watch dial. 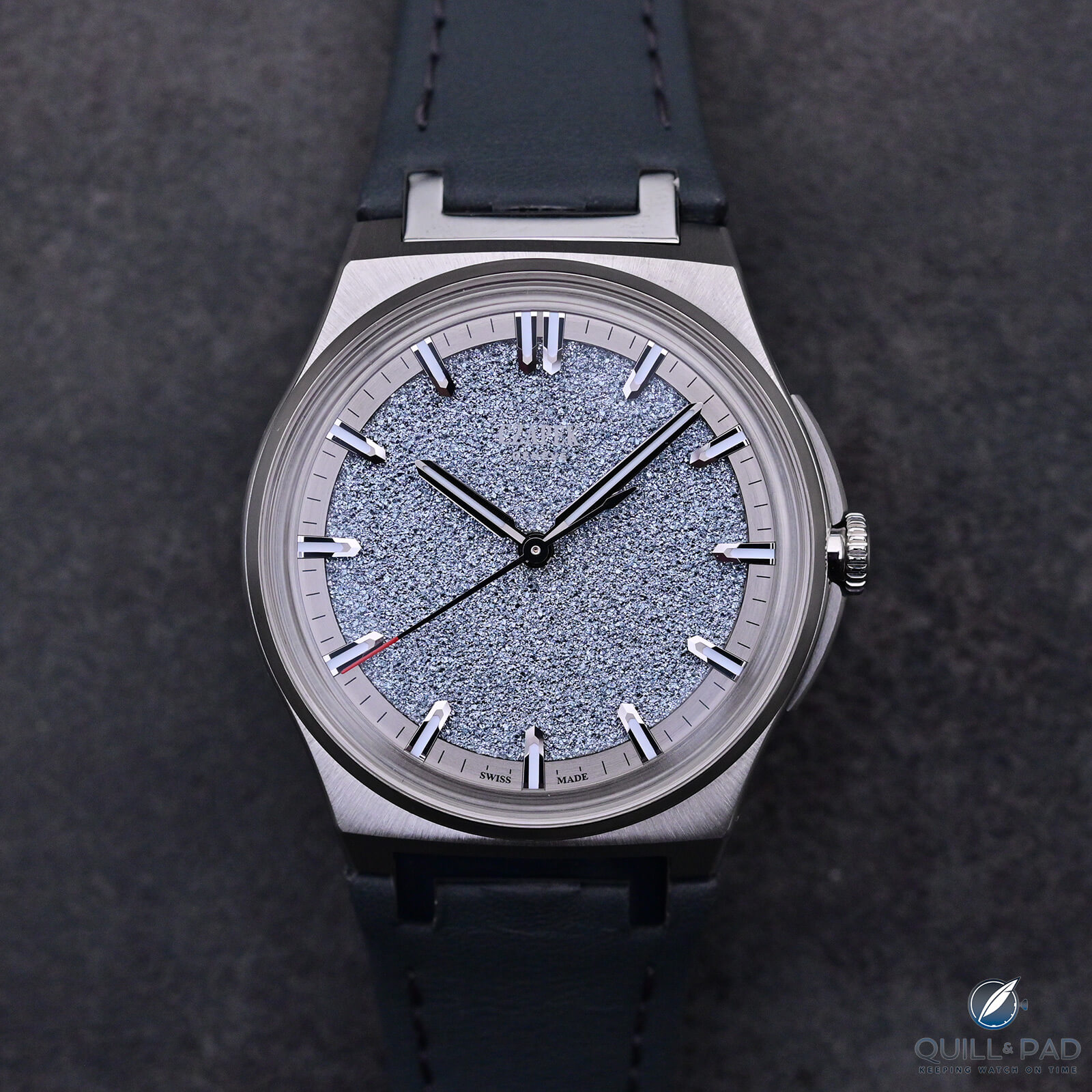 At Watches and Wonders 2022, Czapek released a limited edition of the Antarctique, the brand’s incredibly popular integrated bracelet steel sports watch, with an absolutely mind-blowing dial made of pure osmium crystals. The Antarctique Frozen Star S is a piece of metallurgical history for your wrist and a feast for the senses.

The Antarctique Frozen Star S is all about presence, and there is no argument with that. The original Antarctique was already an eye-catching piece with a variety of detailed and visually textured dials, piercing applied markers, and a clean overall aesthetic that helped it become a fast favorite among collectors. The new limited edition Frozen Star S takes the core of the original and inserts a slice of elemental excellence with the inclusion of a crystalized osmium dial, something that upon first glance is clearly beautiful but gives no indication of its rarity or difficulty to manufacture. 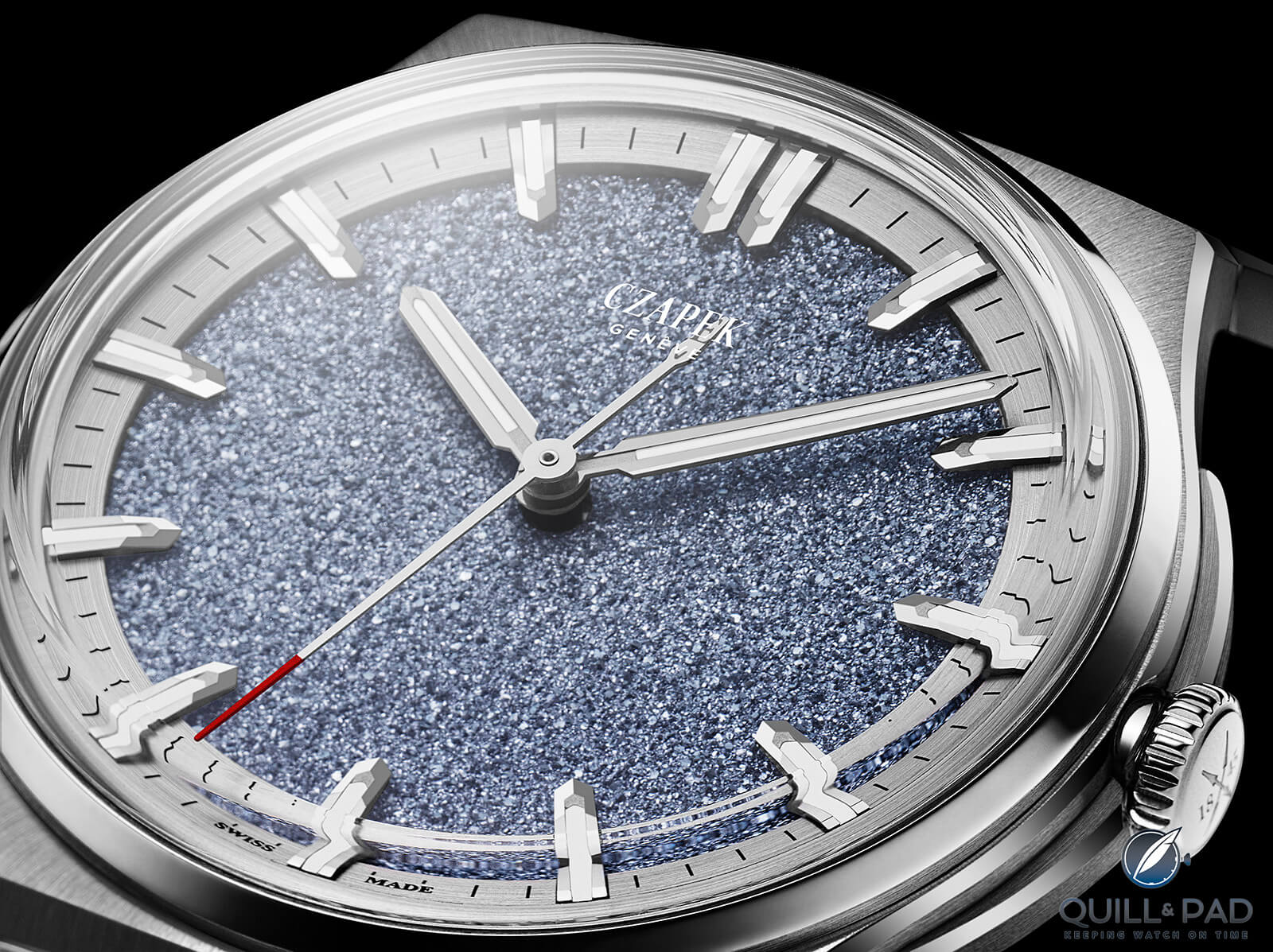 Such rarity adds a lot to the piece, but it also still maintains its allure of a classic three-handed steel sports watch if only with a flashy dial. This might be the first thought of random observers, but anyone in the know will instantly want to take a closer look. The Frozen Star S drops the date function and window in favor of an additional dagger-shaped marker (lucky number 13) at 12 o’clock to keep the dial focused on the osmium.

Since osmium is so difficult to work with, the Czapek logo has also been changed from an applied one on previous models to here being etched into the underside of the sapphire crystal. That same detail was previously seen on the “Special Edition” Antarctique pieces with hand-varnished dials. 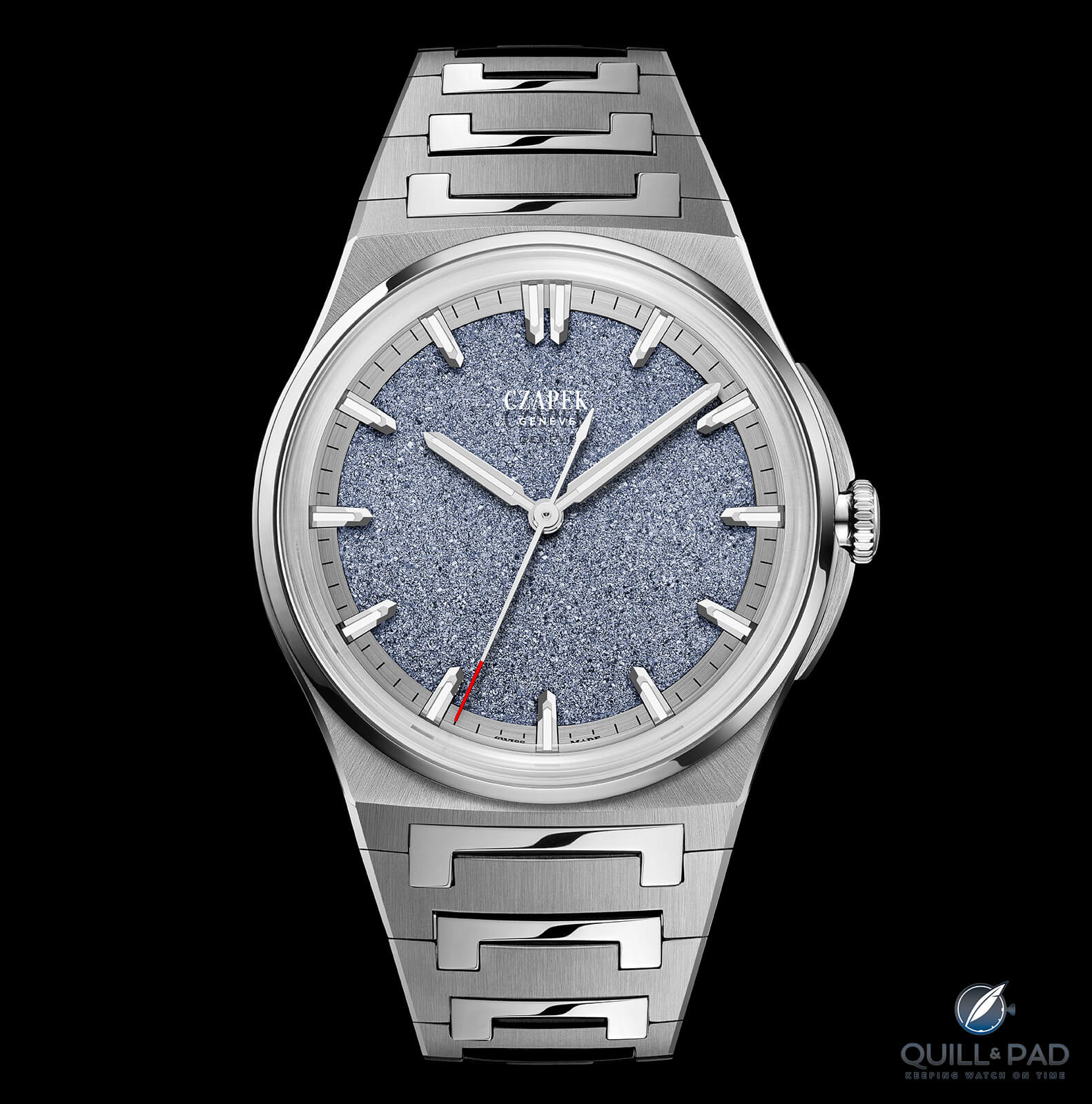 The outer chapter ring and applied dagger markers come from the original Tierra Adélie with cantilevered markers that float above the osmium dial. The almost hueless steel of the case, markers, and hands contrast surprisingly with the sparkling blues and greys of the crystallized osmium. Since osmium is from the platinum group of metals it makes sense that it wouldn’t match the steel perfectly, but the subtle difference of platinum is blown out of the water with the richer blue of the osmium dial. 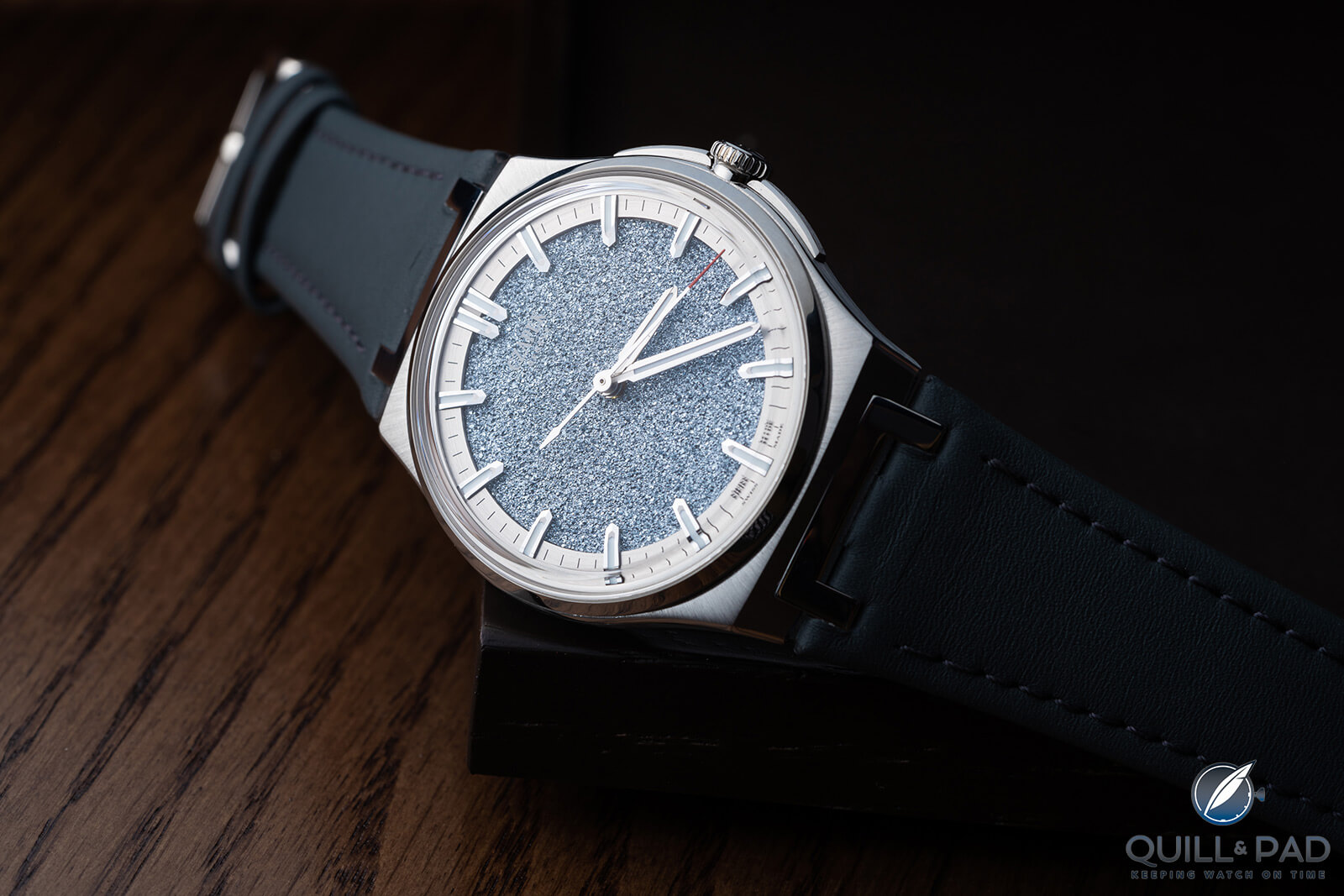 Color is always a favorite detail of mine, and often it comes not from a material’s natural properties but from a secondary finishing process to achieve some vibrant or delicate color. With the crystallized osmium dial, the color comes entirely from the material and the process that creates the rugged surface. The tiny crystals form under a special process that allows perfectly pure osmium to grow into a network of interlinked crystals of various sizes. The edges of these crystals are incredibly smooth and very geometric, allowing light to reflect and bounce around within the tiny crevices before being reflected back to the eye. 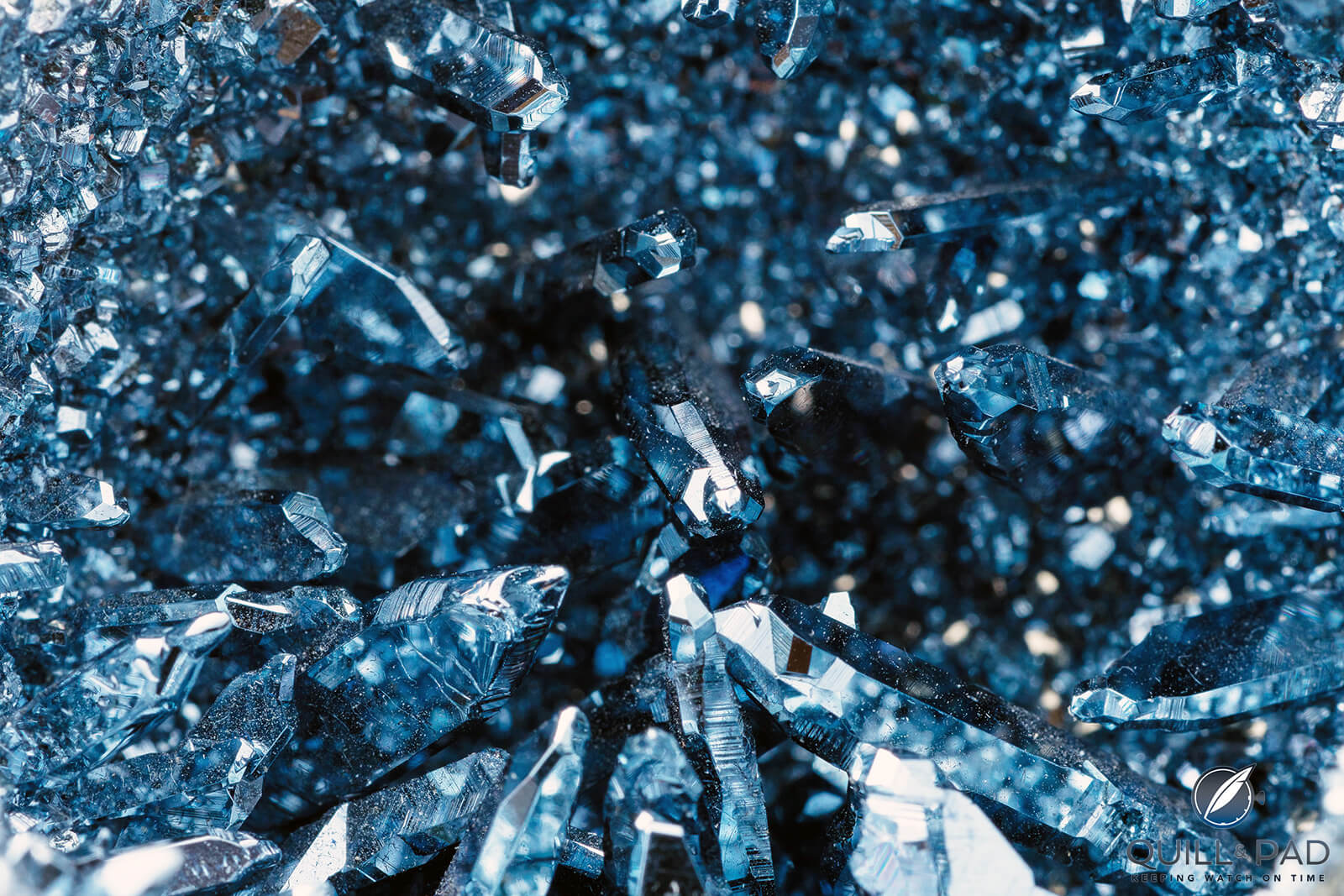 This is the reason osmium sparkles like crushed diamonds but still has a blue hue. The color of metals is a very complicated bit of physics, taking into consideration the energy levels of electrons, the concept of “band theory,” and how that affects absorption of light. That is much too complex for this discussion, but let’s just say that it affects a material’s emission spectra (the wavelengths of light that are reflected or emitted from an element). The emission spectrum of osmium has a good smattering of lines all throughout the visible spectrum that are clustered just a bit more toward the blue and violet end, resulting in a material with mostly white reflections and a tad extra blue. 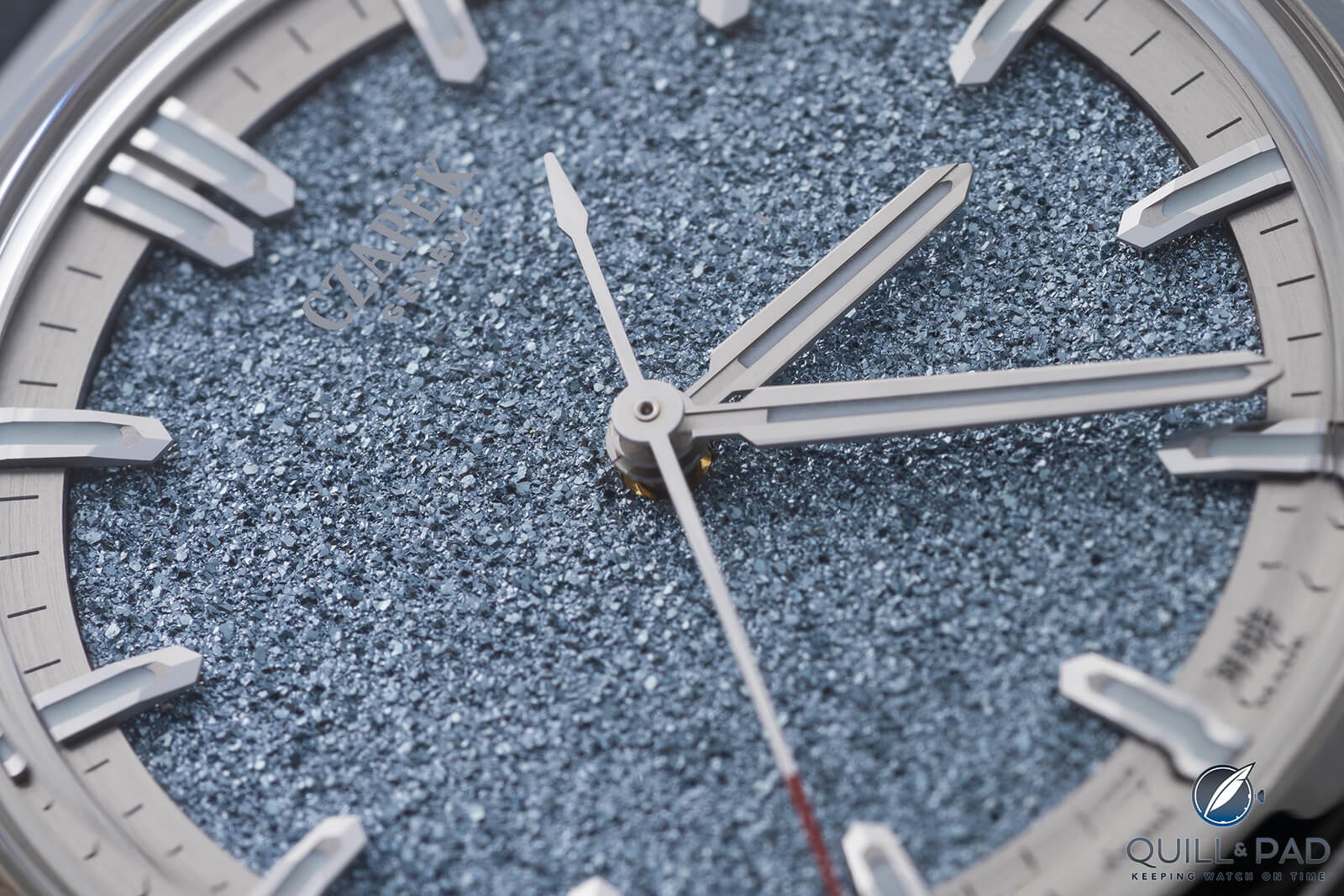 Next to the cold grey of the stainless steel, the blues help the crystallized osmium pop out from the surface. The texture of the tiny crystals helps a lot with that contrast, but the crystals aren’t exactly an intentional finish decision. Osmium is a very difficult material to work with and has a melting temperature of 3,033 degrees Celsius (5,491 degrees Fahrenheit). It also is the densest stable element on earth, beating out gold, tungsten, and platinum, and is harder to compress than diamond.

This effectively means that using ceramic cutting tools or electrical discharge machining (EDM) is the best bet for shaping the material, but we also need to remember that the harder something is the more brittle it becomes, so shattering is possible when trying to process it. As a result, crystallized osmium is often found as it forms, and usually in sheets that can be as thin as 0.15 mm.

In my research I found a company that sells crystallized osmium mainly as an investment commodity like gold and platinum, and it commonly comes in thin, sparkly shapes cut with wire EDM as well as round disks just like the dial of the Frozen Star S. A disk around 30 mm in diameter with a .5 mm thickness (similar to the dial of this watch) can run anywhere from $15,000 to $25,000 depending on the roughness of the crystal formation, not including post-processing to cut a center hole and attach dial feet. That makes the dial of this watch alone worth more than the regular edition of the Antarctique S as a whole. 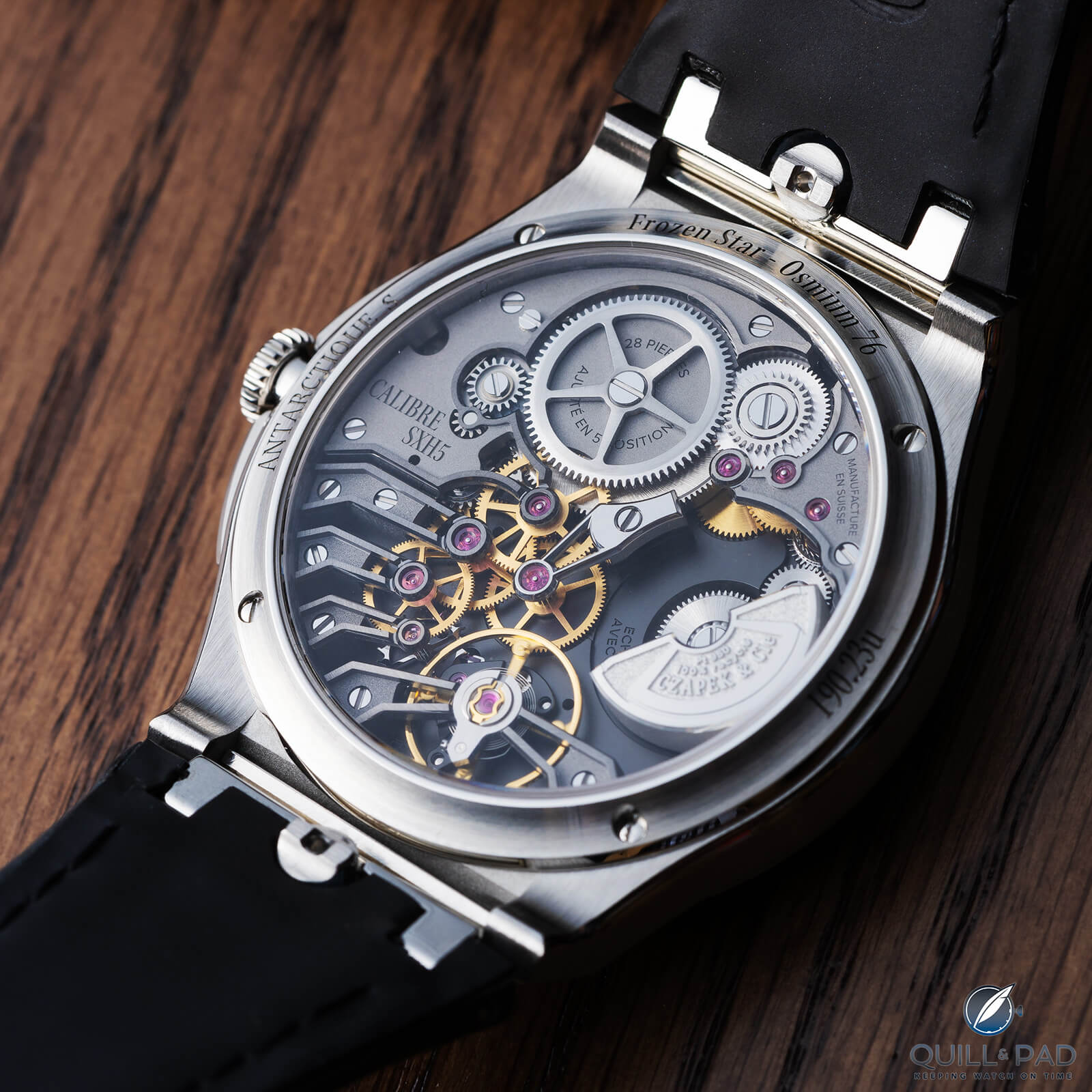 So you can see that the dial is by near default a stunning, sparkling, premium addition to an already awesome watch. Czapek’s automatic Caliber SXH5 powering this watch is more than enough horological eye candy for most people with individual bridges for half of the gear train, all skeletonized, with a recycled platinum micro rotor to keep everything ticking. With a 60-hour power reserve you can easily let the watch have the weekend off after it becomes your daily wear piece since it is so stunning and functional.

Since the osmium dial can be both dramatically flamboyant (in the right light) and beguilingly subdued, the Antarctique Frozen Star S can play multiple roles in your collection. While I would want it to stand out, some may prefer the sparkly monochromatic look that adds just a dash of premium feel that a snow-set diamond dial could never compare to. 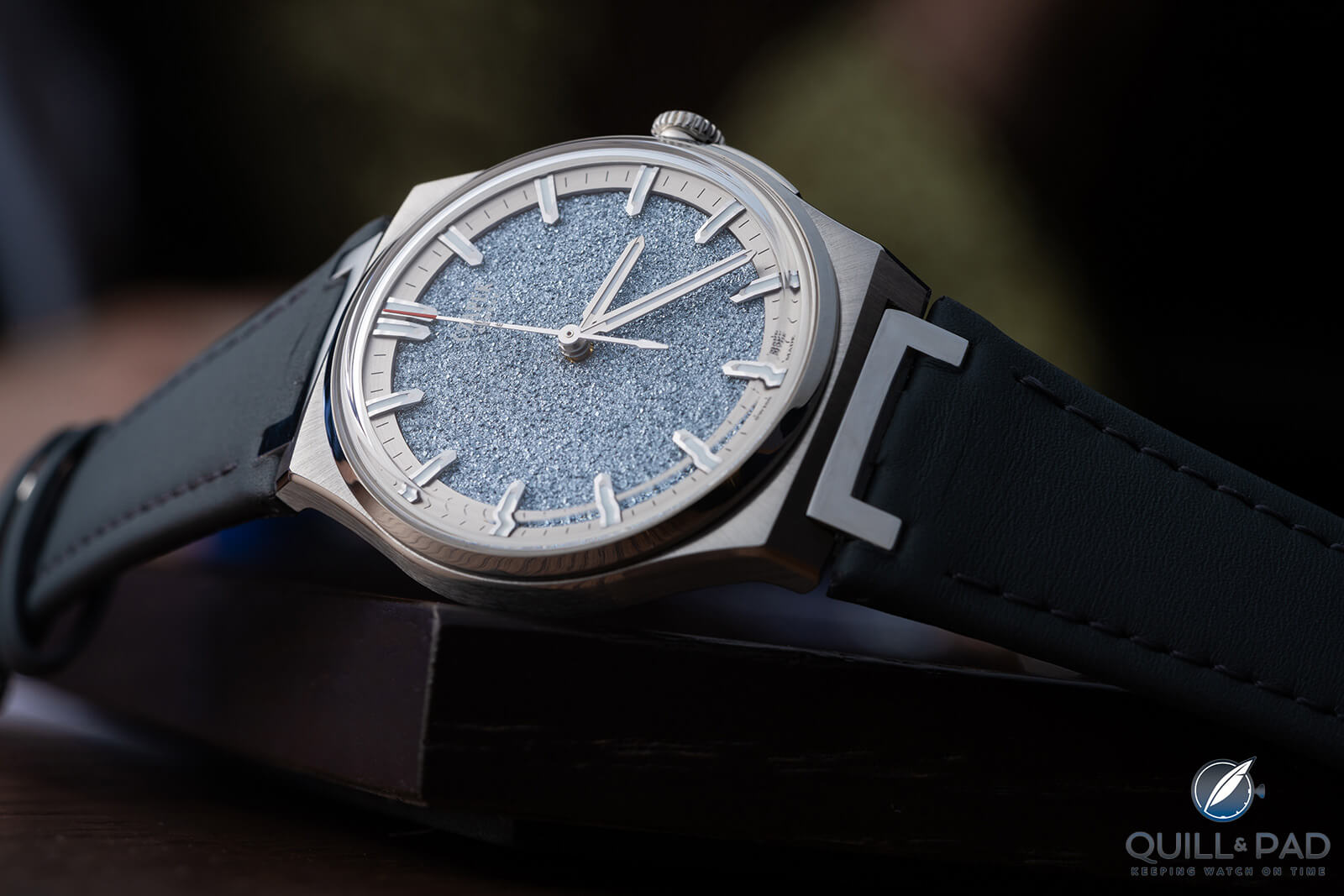 Details like this are what set Czapek apart many times. I’m not sure what can follow up a watch with the rarest precious metal known in the universe so far, but knowing Czapek CEO Xavier de Roquemaurel’s passion for his brand, it will certainly be worth waiting for. I even have some ideas that I’d love to see come from the brand; the potential is obviously only our imagination and, I guess, the limits of chemistry and physics!

Since osmium is the densest and least compressible precious metal, I’ll do my best to break this down!

*Wowza Factor * 9.95 Learning about osmium is almost as amazing as seeing that dial!

*Late Night Lust Appeal * 99.5 » 975.762m/s2 Getting lost in the sparkly crevices of the osmium crystals is enough to keep you up until dawn!

*M.G.R. * 67.4 I love a great micro rotor movement, especially one that appreciates architecture as much as this one!

*Added-Functionitis * N/A With this dial there is no need to have anything to distract you from gazing upon that incredible crystalline dream. Skip the Gotta-HAVE-That cream and just try to find hidden images in the dial like you would the clouds!

*Ouch Outline * 11.4 A cracked tooth! Not everyone is blessed with amazing teeth that last their entire lives, and I’ve had my fair share of dental mishaps. Pain in the mouth is no fun day, but I’d spend hours in the dentist’s chair of anguish if it meant getting this watch on my wrist!

*Mermaid Moment * It’s made of what?! Osmium is a wondrous material not just for its properties but also for its beauty, and seeing this watch was enough to call a caterer and start planning a reception!

*Awesome Total * 875.1 First start with the density of osmium in g/cc (22.6) and multiply by the diameter of the case in millimeters (38.5), before adding the caliber number (5) for an awesome total that is exceedingly rare!

Calling On The Village: Czapek & Cie. And The Quai Des Bergues Collection

Focus On Materials: Primer On The Science of Steel, The Stuff Of Cases, Mainsprings, Hairsprings, Pinions, Escapements And The Backbone Of Watchmaking